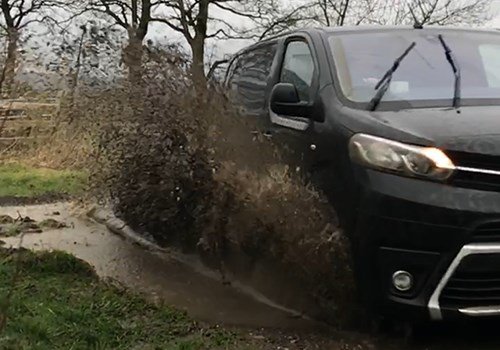 This week we had the pleasure of test driving the second generation (and much improved) Toyota Proace. I put the vehicle through some rigorous work to determine whether this commercial vehicle is truly fit for purpose! The shortest wheelbase is just 4.6m x 1.9m, making the Proace closer to a compact van size, much like a Volkswagen Caddy or Ford Transit custom. The medium wheelbase is 4.9m x 1.9m and the biggest version 5.3 x 1.9m. Accessing the cargo is made easy with two side hinged double doors at the rear, also known as barn doors, and two sliding side doors which come as standard. On the short wheelbase version, we placed two euro-pallets in the rear and had plenty of spare space. On models fitted with the smart cargo system, the front passenger seat folds upwards allowing bulky items to sit along the cab floor and poke underneath the seat base, adding in to the already impressive cargo length. 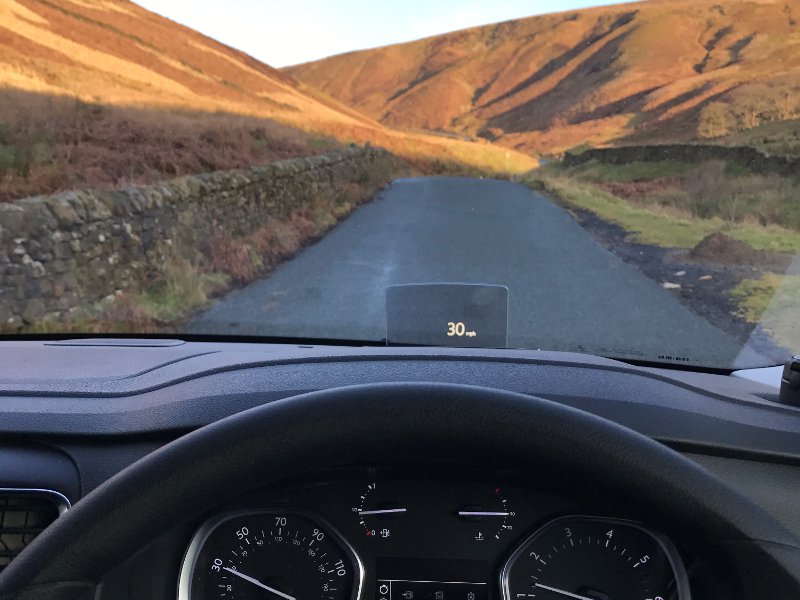 Whether you view the Proace as a compact van or mid-sized panel, fuel economy is excellent. The least efficient engine is actually the entry model due to the lack of stop start technology. Having said that it still produced 51.4mpg, which is very respectable for its size, whilst the bigger 2.0. engine claims to produce 53.5mpg. We had the 1.6 115bhp version which comes with the 6 speed gearbox and averaged 50.4mpg on an empty load. With a full cargo doing the same route we managed 43.4mpg, which is extremely impressive. We tested the Proace along motorways, country roads and in cities to get a realistic result. Selective catalytic reduction technology is fitted to every model, which uses Adblue solution to clean out the exhausts and reduce emissions. This solution should be topped up by the driver every 9,300 miles. Three engine options are being initially offered on the Proace, all diesel; there’s the choice between two 1.6-litre engines with 94bhp or 114bhp and a 121 bhp 2.0-litre. The 1.6 114bhp we drove impressed with the power it produced, particularly in the low end, and when empty it was rare we went past 2,500rpm. On the motorway it was extremely smooth and would sit at 70mph with ease, whether empty or fully loaded. Toyota have made some obvious improvements with the second-generation model, including refinement and handling. On the road body-roll was minimal and the suspension was forgiving with any bumps. We found the engine almost impossible to fault. The vehicle had plenty of torque when carrying heavy loads, avoiding the ‘sluggish’ feel of some competitors. As you ascend the Proace range, the engines improve respectively. Road noise is minimised on higher spec models thanks to an acoustic windscreen and other sound proofing measures. Toyota have managed to come up with a layout that is both practical and spacious, using high quality materials that are very durable and hard wearing. Good sized mirrors and side windows and a fairly high driving position all contribute towards good visibility for the driver and passengers. There is enough room for three adults, although the gearstick does eat into that space slightly, so reaching for second could sometimes mean stroking someone’s leg. There is plenty of storage with large door pockets, small cubbies located in the dash and the most important; a cup holder in the dash to hold your morning brew. If I was being critical, it is clear that Toyota have improved the quality massively inside the cabin, but a leather steering wheel or a softer material would have been a nice option to have. The gear stick is an unusual square shape and takes a little getting used to, but once you have a couple of trips under your belt it is fantastic. I would recommend going for the higher comfort spec as it gives the Proace that something extra both externally and internally. Chrome accents on the outside with colour coded bumpers and fog lights would be my idea of heaven! My personal choice would be an upgraded version to have air conditioning, noise reduction windshield, LCD information display and a window in the panel bulkhead. Our demo was also equipped with the Premium Pack which includes 17-inch machined alloys wheels and sat nav. Now, you may think this is overkill for a van, but there is no denying that alloy wheels make it an already attractive commercial vehicle look pretty special.

Our Toyota demo van was fitted with ‘Toyota Safety Sense’ which includes;

Some options were extremely useful, such as the head up display, although a luxury for a van, I found myself constantly using it instead of looking down at the dials. The entertainment screen was extremely intuitive with the system being incredibly easy to use as well as adding a touch of class to the cabin. All models come with DAB and I found it easy to scroll through the vast array of channels. 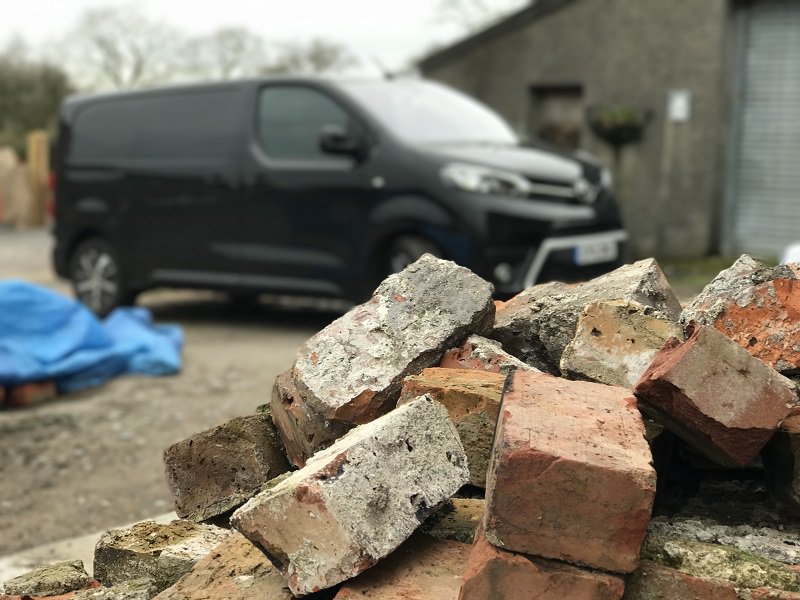 Whilst having the Proace we put it to the test by taking the van to a Stone Quarry. The crusher mechanics were suitably shocked with its luxurious cabin and twin sliding doors ‘AS STANDARD’. The transaction control system was put to the test and whilst making the van mix in with its muddy background its took everything in its stride. 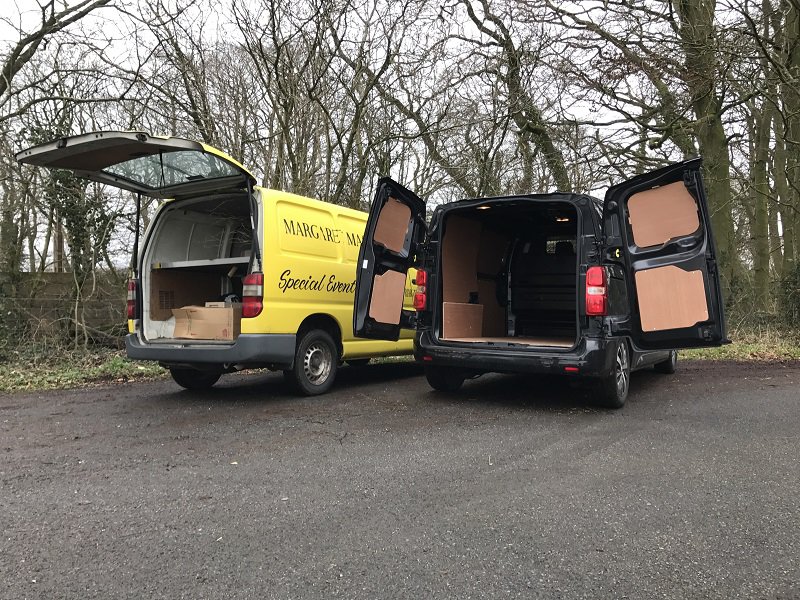 As the Toyota HiAce has an association with Florists it was only rational to see if the relationship could flourish under the Proace. This is where the barn style rear doors really came into their own as the accessibility at the rear was super easy with the rear archers not intruding on space (even with being ply-lined). There is no comparison between the two vans with the Proace oozing luxury. 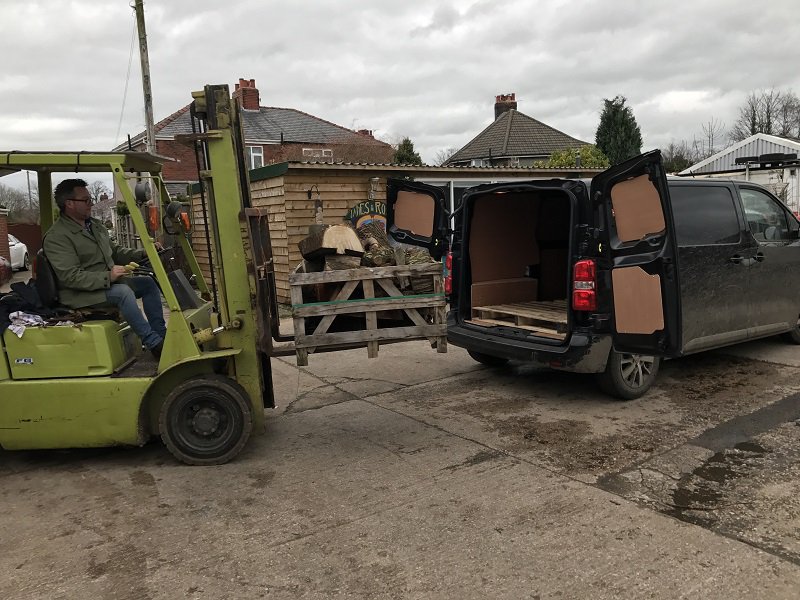 A tonne bag fit into the back with ease being lifted in by the forklift truck and as the rear bumper is small you can get the forklift up close to the van allowing extra flexibility with how you load the van.

Toyota’s LCV line-up is growing with the launch of the Proace City...