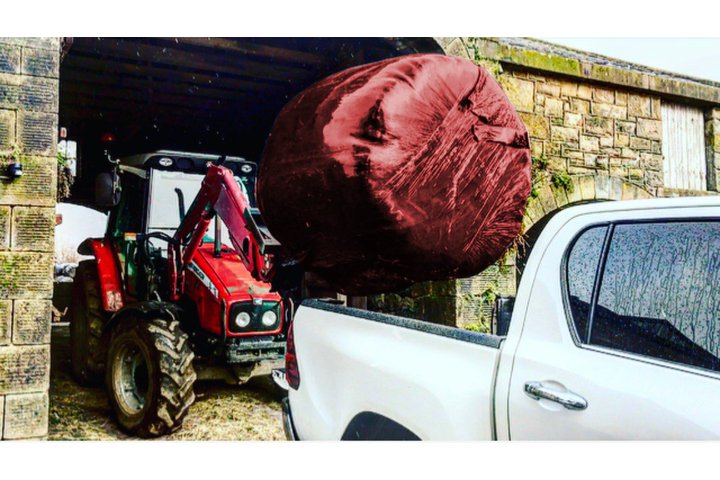 Toyota Hilux put through its paces

Since the first model went on sale almost 50 years ago, Toyota’s Hilux has come a long way. The car has built a strong reputation for its reliability, off-roading ability and toughness. We had the pleasure of test driving the pick up for a few weeks and were suitably impressed!

Let’s talk about the running costs first so we can get all the slight negatives out of the way and forget about them. First of all, Toyota have made the decision to reduce the size of the engine from a 3.0-litre to a 2.4-litre. Don’t worry, we also thought this was a bold and daring move, however, it turns out the new Hilux offers increased torque of 42lb as a result, giving the vehicle more power, although you probably won’t notice the difference in fairness. The Hilux doesn’t offer a rear-wheel drive option, allowing rivals such as the Nissan Navara the edge in terms of efficiency. We test drove the double cabin variant which claims to manage up to 40.4pmg, however we only managed 29.6mpg at best with a mixture of motorways, roads and country lanes. This places the Hilux around the middle of its competitors in terms of efficiency, above the likes of Isuzu and SsangYong, but behind the L200 and Navara. 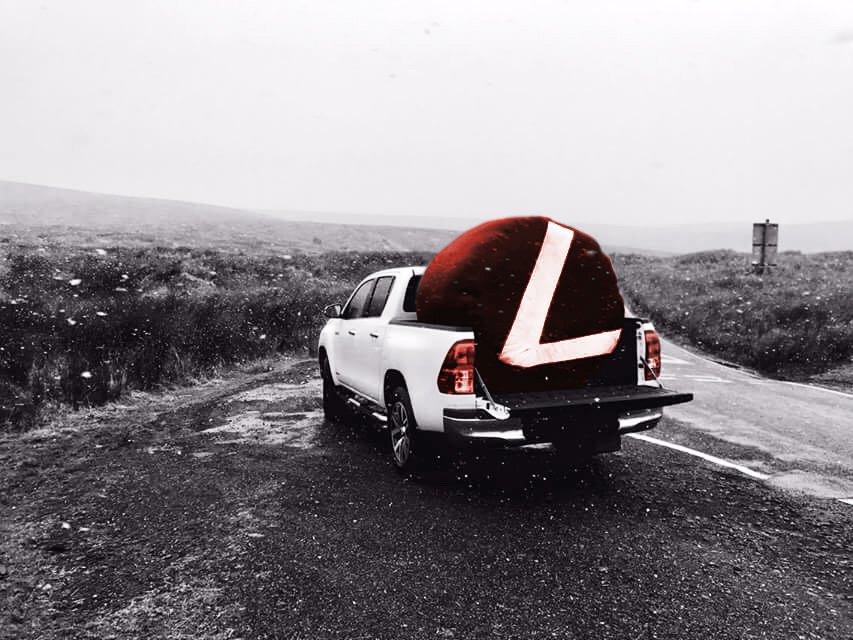 As a commercial vehicle, these are arguably the Hilux’s most important traits and the new generation model delivers. The towing capacity and load bay have been increased and the vehicle itself has been lengthened, widened and lowered. The load area has seen the biggest increase of 130mm, making it much wider than previous generations, and other rivals. These adjustments mean practicality has tremendously improved, putting the Hilux on a par with competitors.

We wanted to put the pick-up to the test and the best way we knew how was a day on a farm. For those of you that don’t know, hay bales are big and heavy, almost 1 tonne to be exact. So to test size and practicality, we loaded a bale into the back of the Hilux. There were a few inches to play with around the sides and plenty in length. The back of the truck lowered quite considerably once loaded and on hilly areas you certainly knew you were carrying a considerable weight in the back. Having said that, the Toyota dealt with the weight impressively well maintaining traction on the most part. There is no hiding the fact that the Hilux one of the biggest in its market, but with the help of a reversing camera and great visibility out of the front you seem to forget about the size.

Every aspect of the driving experience has improved in the new model. The new engine produces a lot more torque giving it more power and a quicker 0-60 speed. The bounciness in the cabin has reduced more obviously in the front seats and slightly in the rear, giving the cabin a more luxurious feel. With a loaded bay, bounce on rutted roads was almost non-existent, making the ride very pleasant. With a 1 tonne bale in the back, light controls and a tight turning circle made the pick-up impressive in terms of manoeuvrability. Visibility was quite limited when loaded, however the standard reversing camera without a doubt made parking and reversing a much easier task. When travelling with an empty rear on the motorway I found there was plenty of power to sit at the speed limit and further. 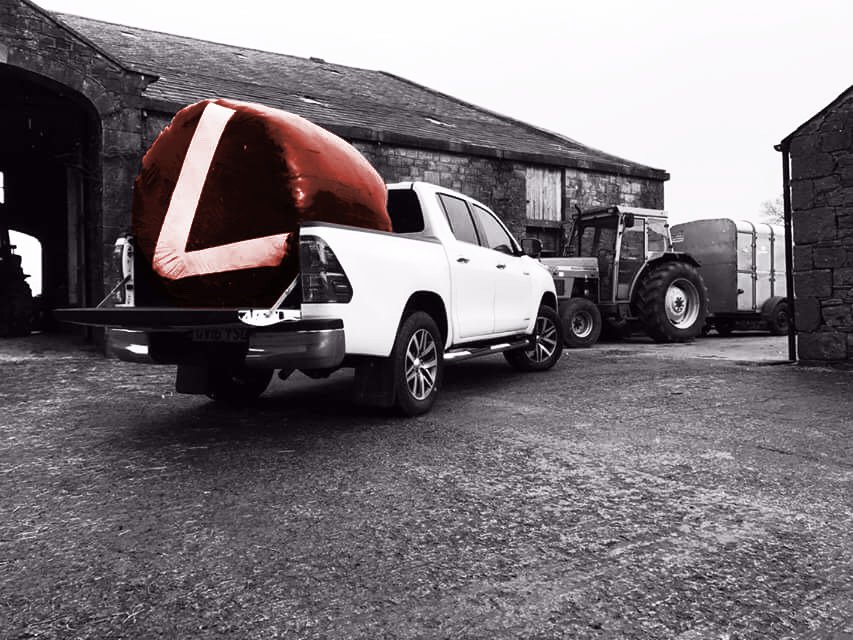 Toyota have paid special attention to the interior, with improved materials and well thought out design. The ‘rough and ready’ look has been dropped, opting for a higher quality finish instead. Having said this, they have managed to keep with the theme of day-to-day working use by installing robust carpets and seats and not using soft-touch plastics. The dash design has taken a leaf out of the Auris’s book, making the cabin much more sophisticated and one of the nicest pick-ups to sit in. You get a central touchscreen on Icon models and above, where instruments such as trip display can be seen. Storage has increased to two glove boxes of decent size, two cup holders in the centre of the dash and an armrest. In the cabin, space is more than ample. Leg, head and elbow room has increased putting the Hilux on a par with competitors and in the back of the double cabin there is space for 2 adults to sit happily, squeezing in 3 for short journeys.

The Icon model is the lowest in the Hilux range but it still comes with an impressive array of kit including:

The Hilux has held an excellent reputation for reliability for a number of years now, but were also impressed with the safety of the new generation too. All standard models come with 7 airbags, including one for the driver’s knees, and curtain airbags. One step up from the basic model, front and rear seatbelt pre-tensioners have been fitted and ISOFIX child seat mountings are present in all double cabin models. Under the hood, you’ll find an array of safety systems including ABS, emergency brake assist, vehicle stability control, hill start assist and trailer sway control all as standard. The new Hilux also comes with an optional safety sense package, which when fitted earns the vehicle a full 5 stars Euro NCAP rating for crash protection. 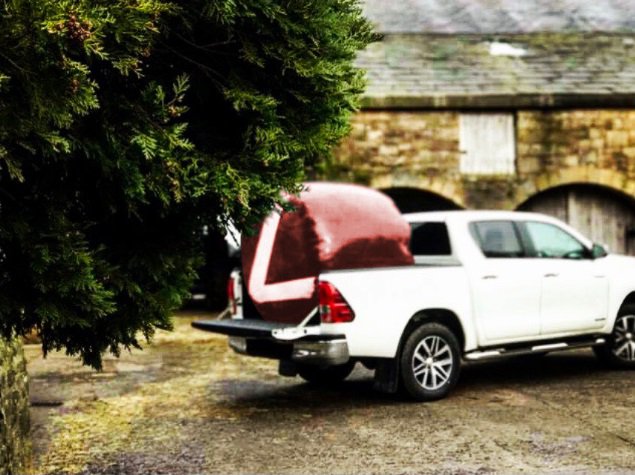 Initially I was dubious about driving the Hilux due to my 90 mile round trip to work on both motorways and in towns. However, with an optimal seating position and great visibility out of the front, the sheer size of the vehicle isn’t a problem. The only difficulty I came across was trying to park in Manchester as the length of the Hilux is larger than parking bays. On the farm, the vehicle proved to be extremely robust. Putting the pick-up into 4wd made it even more capable off road and in hilly areas. The only nag I have about the whole experience was how much it cost me in fuel.