The Toyota GT86 is a 2+2 sports car jointly developed by Toyota and Subaru. Both are manufactured at Subaru's assembly plant in Gunma, Japan with the Subaru variant marketed as the BRZ. Since the demise of the MR2 and the much missed Celica, Toyota didn’t have a reasonably decent sports car in its model portfolio, which was a real shame for a brand with a strong past in driver-focussed cars. Before the GT86 came along in 2012, Toyota became better known for reliable range of bread-and-butter cars such as the Avensis and Auris.

Aside from the badges on their respective bonnets, both the GT86 and BRZ are pretty much identical. Both continue to use the same non-turbo 2.0-litre flat four-cylinder ‘boxer’ engine from Subaru, which develops 197bhp at 7,000rpm. The Club Series versions of the Toyota GT86 focus on the coupe’s style and driver-centric handling and performance. Following on from the ‘Orange Edition’ from 2017, a new ‘Blue Edition’ went on sale in June this year and I spent last week with the ‘Blue Edition’ (fitted with the optional Performance Pack), and filed this report…

At the end of 2016, Toyota ushered in the facelifted GT86. It was a subtle makeover with new LED headlamps and tail lights, re-profiled bumpers, a reworked interior and improved equipment levels. Mechanically, the body shell was made stiffer, which led to better handling. 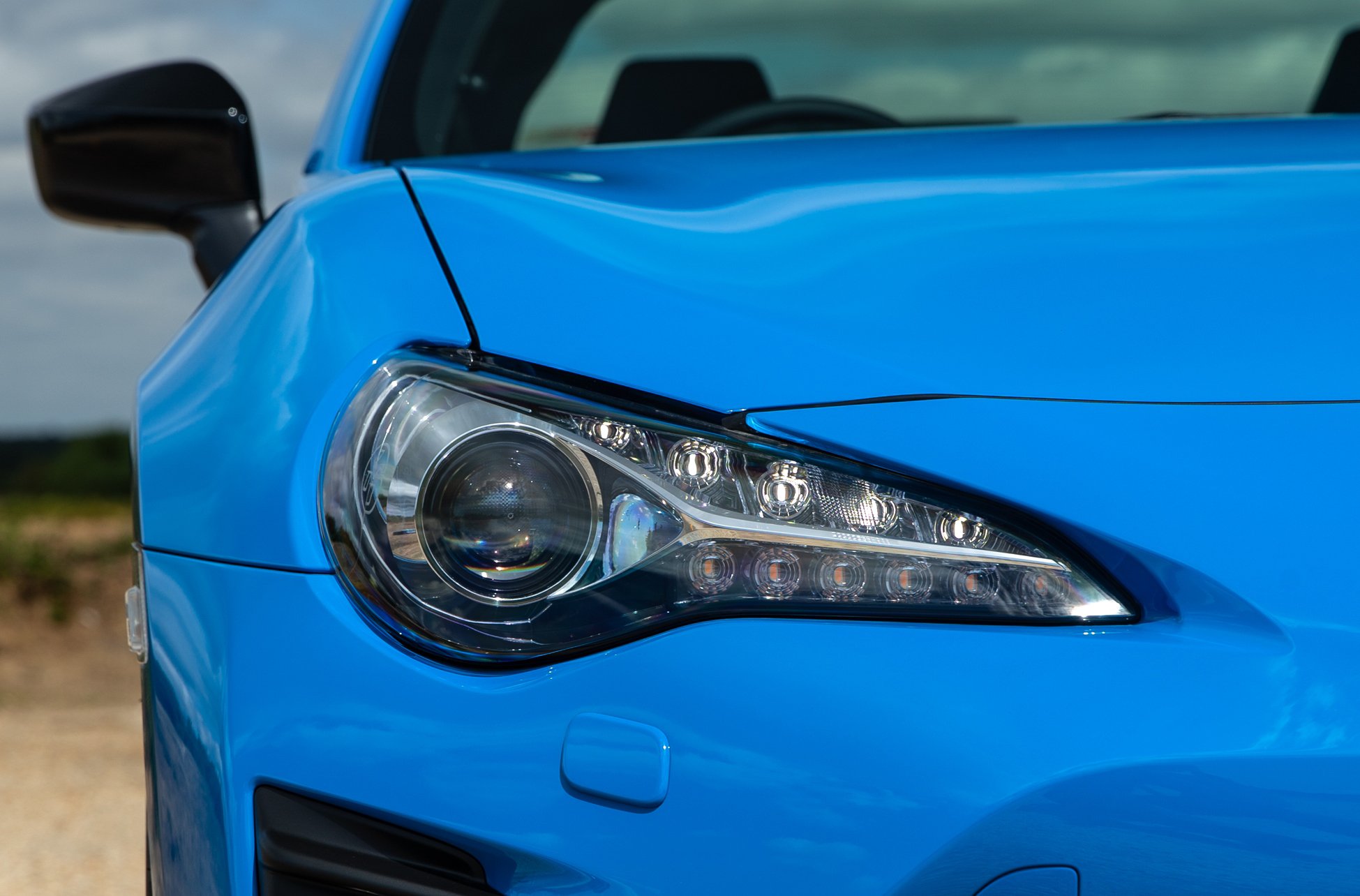 Accentuating its driver-focused design, the key elements of the GT86’s interior are functionality and usability. Nothing is there that shouldn’t be there and the vertical layout of the central control stack is simple and logical. It's not exactly dated but it doesn't feel particularly cutting edge either, especially features like the old fashioned digital clock which looks like an ode to an 80’s Casio calculator. The 6-speed manual gear lever is well placed, the small steering wheel has a quality feel to it and the sports seats (partial-leather and heated on the ‘Blue Edition’) are great with plenty of lower and upper side support. The dials are nice and simple too, dominated by a large rev counter and a digital speedo. The air conditioning controls with their bolt-shaped dials are a tad clunky but there's a nice row of rocker switches below and an engine stop-start button which some might find awkwardly located.

Toyota describes the GT86 as a 2+2 sports car – but, as with most coupés this size, the rear seats are only really suitable for carrying extra bags or somewhere to put your coat. Still, at 237 litres the boot is a reasonable size and the rear seat uprights fold down if you do need to carry something larger. Equipment specifications for the ‘Blue Edition’ match those of the GT86 PRO model and include a limited-slip differential, cruise control, dusk-sensing headlights, auto wipers, sued-wrapped dashboard and door accents, climate control, heated front seats, LED front and rear lights. Toyota’s Touch2 multimedia system fitted to the test car is from the options list, as was the Performance Pack.

Whichever GT86 you choose, there is just the one power plant nestled into the Toyota’s nose: a 2.0-litre, non-turbo petrol unit with its four cylinders arranged in a horizontally opposed ‘boxer’ configuration, known as D-4S.

The engine comes from Subaru, exponents of this type of engine since the 1970s. It’s great for a sports car because its wide, flattened design allows the weight of the engine to sit low down, bestowing the car with a much lower centre of gravity and greater dynamic ability.

Peak power is 197hp at a rev-happy 7,000rpm, meaning you have to make it work hard to get the best out of it – something it does willingly.

Acquiring the maximum torque of 205Nm also requires the engine to be revved to around 6,500rpm. In real driving terms this requires frequent gear changing, especially when overtaking or pulling away from slower corners. It merely reinforces the facts that this is a car the driver has to engage with in order to extract the most pleasure from it. Two six-speed transmissions are available – one manual as fitted to the test car, and the other a conventional torque-converter automatic (no dual clutches here). Stick with the former for a top speed of 140mph and a 0-62mph dash of 7.6 seconds. Opt for the auto and those figures are reduced to 130mph and 8.2 seconds.

Toyota has listed the GT86’s official combined fuel economy as 32.8mpg, but it is no great challenge to better that figure during normal, everyday driving conditions.

During my week with the GT86, I covered a total of 407 mixed miles and achieved an average of 41.2 mpg and attained an average speed of 37mph. Emissions are a lofty 196g/km of CO2 and insurance falls in the 34A group. 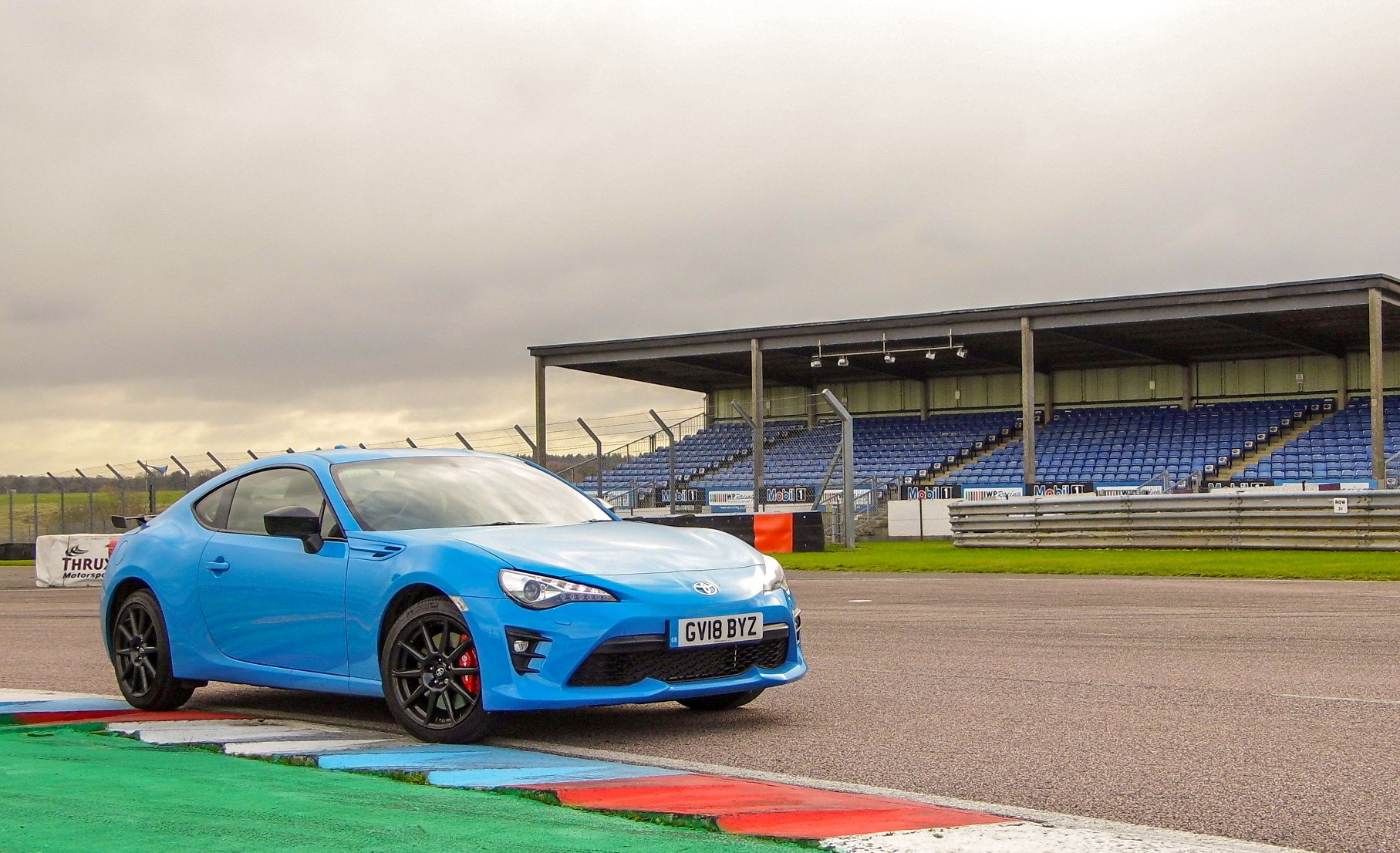 The GT86 comes with an exceptional amount of safety equipment. Stability control is standard and if you do get the car out of shape, there are no less than seven airbags to protect you and yours. Active anti-whiplash headrests are included, too. Security kit is also pretty good, with an electronic engine immobiliser and alarm being provided as standard. A bit of a misnomer here as the Performance Pack doesn’t actually offer any more engine performance but is assists keen drivers unlock more performance through the corners. Technically, it comprises a Sachs-tuned suspension upgrade utilising Sachs Performance dampers, plus larger Brembo brakes that deliver better pedal feel and more stopping power. (I can vouch for the last part.) 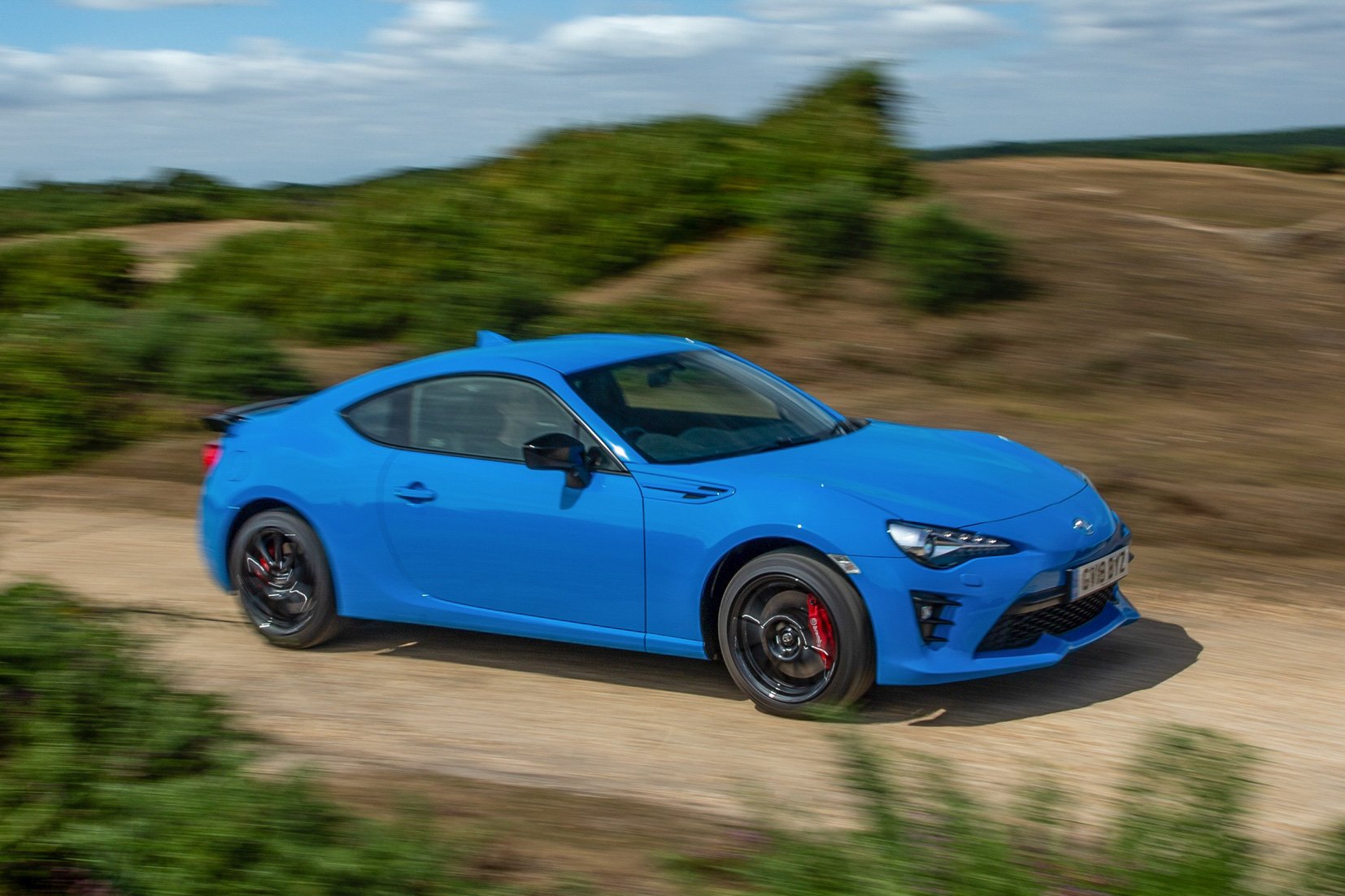 Handling is really what the Toyota GT86 is all about. What you really notice when driving the GT86 briskly is that it is exceptionally well balanced through corners. It feels incredibly assured when you want it to be but a liberal application of your right foot will tease the back end out in a progressive, controllable manner. The manual gearbox as tested is a lovely six-speed cluster with a short positive shift. It means getting the most out of the engine is easy, helped further by a responsive throttle. Where the GT86 isn't as happy is in traffic. Drive it in a busy city and it becomes clumsy and clunky. But, of course, it's out on open roads where the GT86 is in its element. It may not be the quickest sports car around but it isn’t about outright pace. The GT86 makes a grin-inducing growl that noticeably changes pitch as the revs stride effortlessly towards the 7,500rpm red line, something you’ll do frequently. Thanks to the rear-wheel drive set-up and an electronic limited slip differential, it's superb in and out of corners with amazing grip – even in the wet – and remarkable traction too. The stability control system isn't overly intrusive but can be switched to intervene later giving a little more slip before it kicks in. Great if you're having some fun but still want a safety net.

As a modern classic you can drive today, the Toyota GT86 is not hard to love. There's plenty of peace of mind thanks to both Toyota and Subaru's legendary reliability and the fun is more easily attainable thanks to its old-school rear-wheel drive chassis. The ‘Blue Edition’ adds a striking visual element and the Performance Pack maintains your wide grin for longer. But outright speed isn't what this car's talents are all about. If you can live without usable rear seats and don't mind the coupé compromises, then the GT86 is a very rewarding car to own.

Besides, life is not always about red Italian sports cars…sometimes, it’s about Electric Blue Japanese ones, too. The wait is over as this week, the first UK customers are taking...