After a fifteen year hiatus and two missed generations, the Toyota Camry nameplate returns to the UK to replace the slow-selling Avensis.

However, the market for family-sized saloons has somewhat diminished in recent years, giving way to the ubiquitous crossover and SUV. So, why has Toyota decided to re-introduce the Camry here?

The Camry has been - and remains - a big seller for Toyota around the world – 19 million since its launch in 1982 and 400,000 in the USA alone last year. This eight-generation Camry has been on sale in America since 2017. 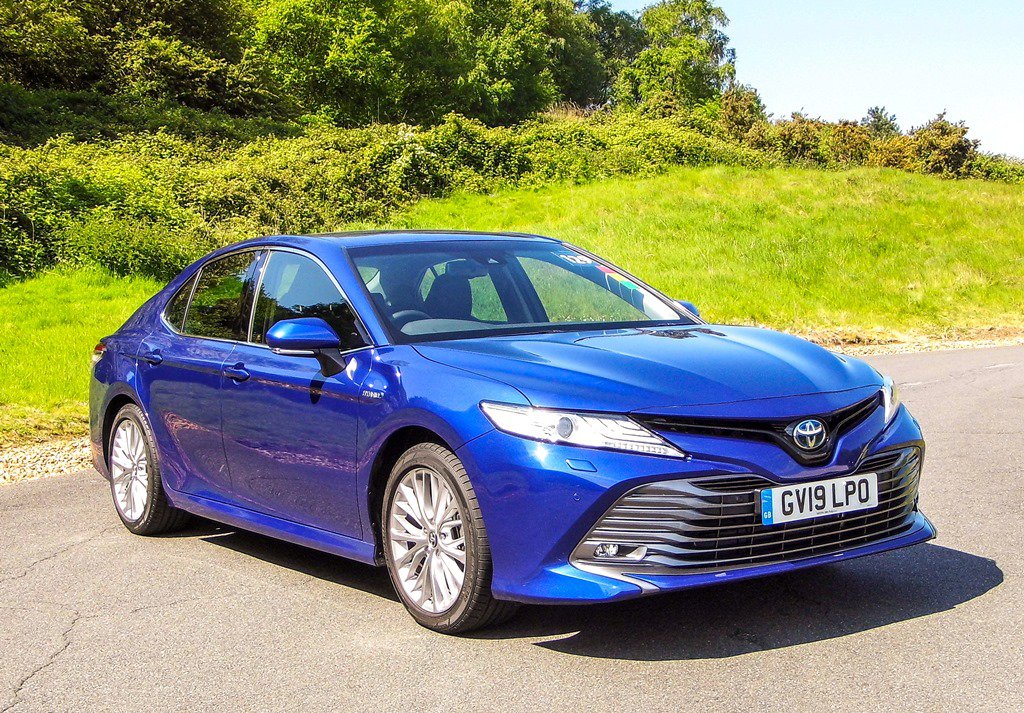 Since the Avensis range was discontinued at the end of 2018, Toyota UK has been without a large saloon in its model range. While acknowledging a shrinking C-segment market, Toyota says demand is still sufficiently strong to justify some tangible sales and will initially import 500 Camrys to sate die-hard Avensis buyers who won’t want to downsize to the smaller Corolla hatch, sedan or estate.

Besides, importing the global Camry from Japan is far less expensive than re-developing a Euro-focused Avensis, given the market situation. Finally, the new Camry is a self-charging hybrid – which is what a green conscious market wants. It also opens the door to an emissions- and budget-conscious fleet market, which is where the majority of those 500 in-bound Camry’s will end up. There, or outside your neighbourhood Uber’s house. 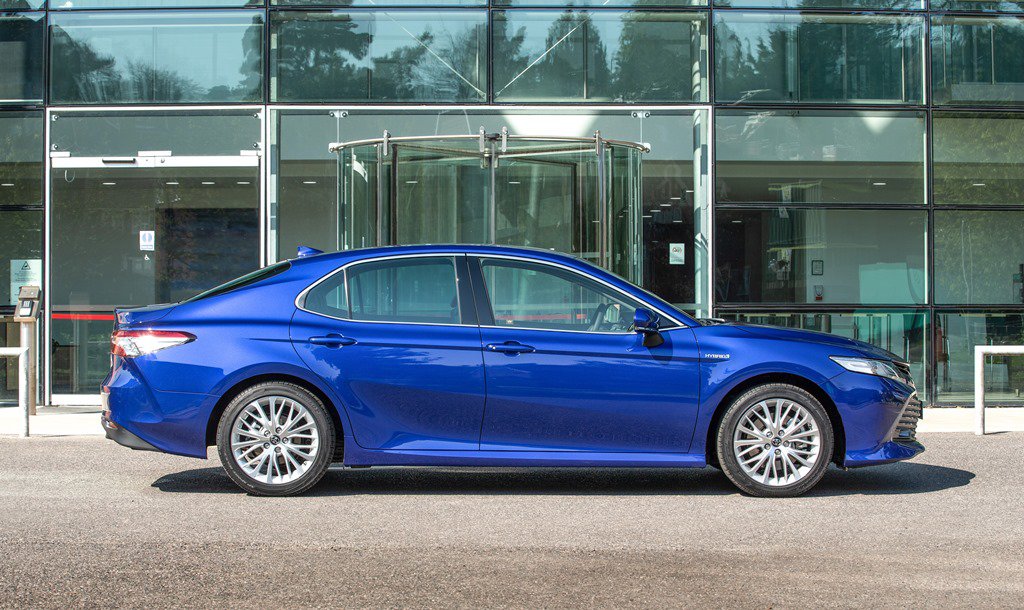 Given the Camry’s strong appeal in the States, its exterior styling is rather conservative and little stands out against other hybrid rivals such as the Ford Mondeo and smaller Hyundai Ioniq. There are also long-established diesel-powered alternatives such as the latest iterations of the Vauxhall Insignia, Skoda Superb and Mazda6.

Whether that full-width trapezoidal front grille adds character or offers a face only a Lexus designer could love, we’ll leave that for you to decide. But the substantial snout that sweeps low and the clean and purposeful lines to the rear do give the Camry a certain gravitas. 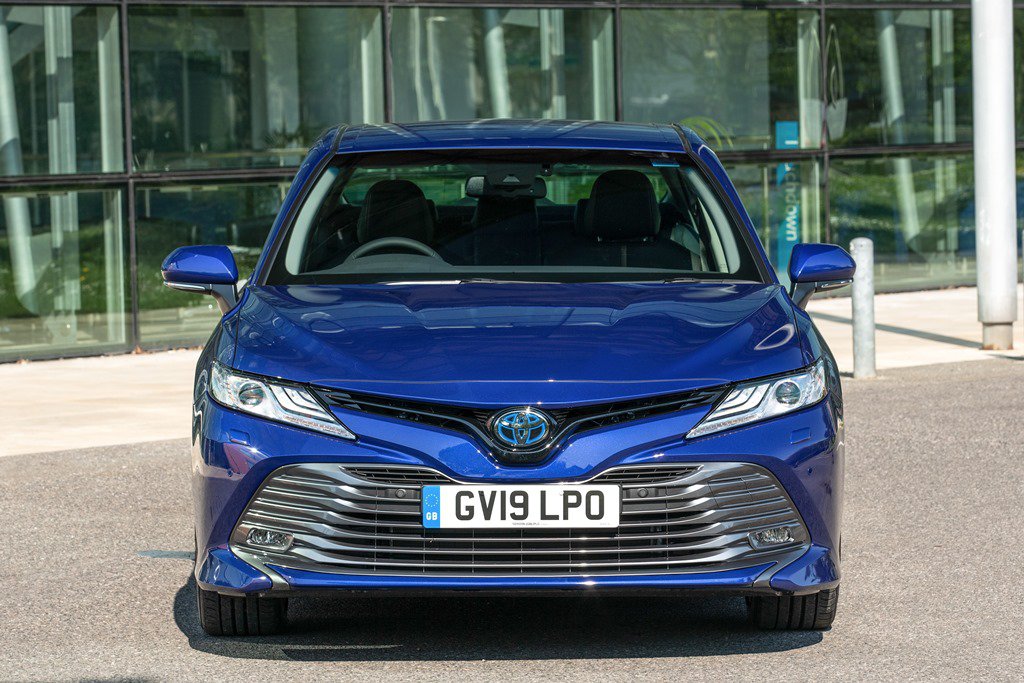 Elsewhere, its exterior offers little to arrest the eye, but its overall design is neat and classy and much less quirky than the trailblazing Prius.

Inside, the latest Camry is as roomy and spacious as the exterior dimensions suggest and in contrast to the outgoing Avensis, the Camry looks and feels light years ahead.

Everything feels solid and substantial, inferring a lifetime of use and while the various materials on display can’t compare with those found in premium offerings such as Audi or BMW, there is more than enough good quality in hand to argue its case against the Passat’s and Insignia’s of this world. 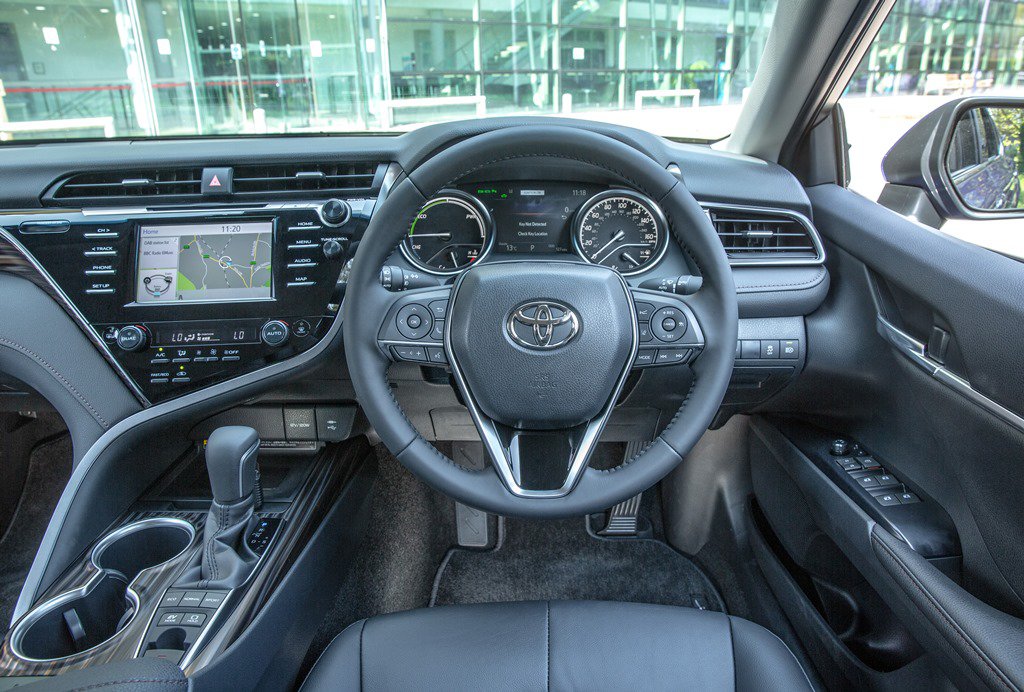 The dashboard isn’t overly cluttered, with most of the switchgear logically placed and clearly marked. Like many touchscreen systems currently available, most functions are operated through it – to varying degrees of success. In the Camry, it is rather less successful. The perplexing menus and slow, dated graphics mean it’s not the best system you might currently encounter. 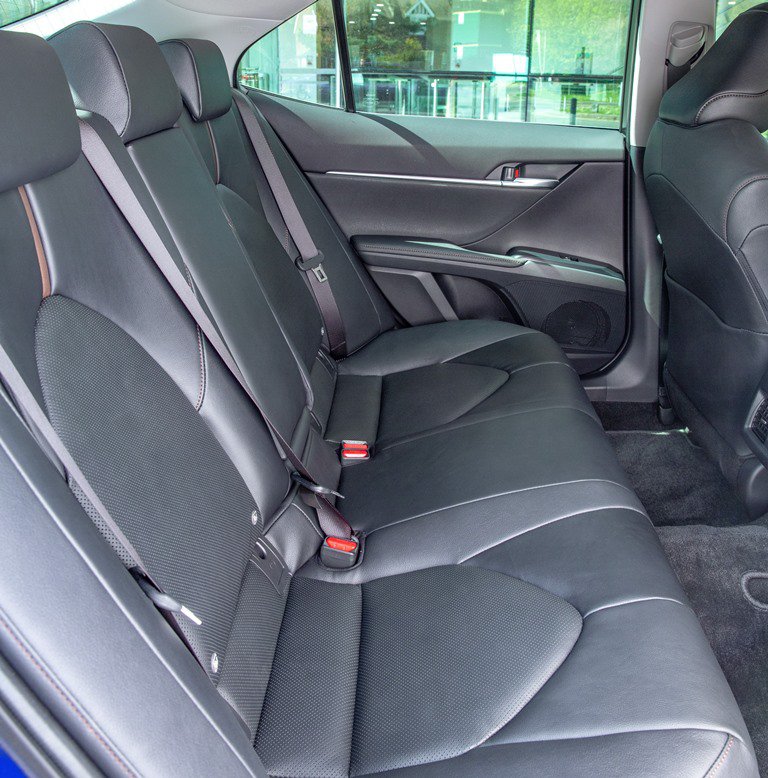 The seats are very supportive and there’s lots of adjustment for your driving position, although some drivers may wish their seat went a bit lower than it does. Plenty of leather adorns the cabin to make it feel that bit more upmarket, but some may find the faux wood trim a tad tacky.

The boot measures up well next to rivals, offering 524 litres with the rear seat uprights in place, although it can’t match the more practical 586-litre load bay of the Volkswagen Passat. It is, however, bigger than that of the Mondeo hybrid.

You can also fold down the back seats for extra space, but like other saloon models, the boot opening isn't as large as that of a hatchback such as the Vauxhall Insignia. 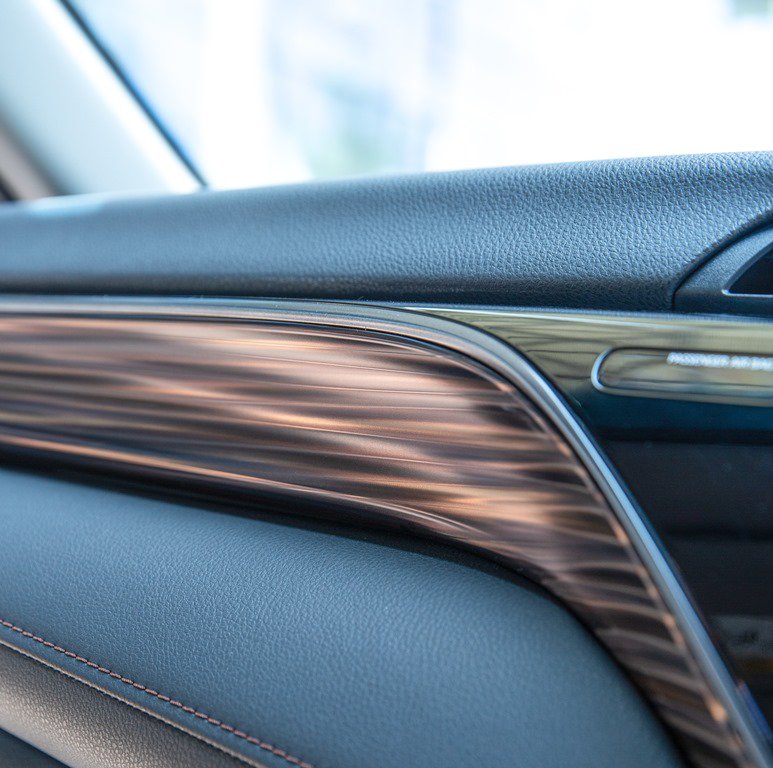 Excel adds larger alloy wheels, LED fog lights, further safety kit and wireless smartphone charging. Leather upholstery is a given, as are heated and power-adjustable seats. The seven-inch UI isn't huge and it lacks Apple CarPlay and Android Auto capability – a serious omission when others offer it as standard.

Still, there’s everything else you’d expect to have to hand, from sat-nav and Bluetooth phone connectivity to a USB port and even a wireless smartphone charging pad. A basic voice recognition function is also included, as are a raft of safety features, including a pre-collision system with pedestrian detection, road sign assist and blind spot monitors. Diesel engines still dominate the saloon sector, so it might seem a somewhat unusual move for Toyota to offer just the one petrol/electric hybrid powertrain in the new Camry for the UK market. But we get that Toyota is committed to electrified models after it axed diesel powertrains from its line-up entirely last year.

The hybrid unit pairs a 2.5-litre four-cylinder petrol engine with an electric motor to produce 215hp, along with 221Nm from the engine and 202Nm from the motor. Power is sent to the front wheels via a CVT automatic gearbox. Performance is decent, with a 0-60mph time of 8.1 seconds possible, along with a top speed of 112mph. There’s plenty of power for everyday use, and it feels smooth and composed when cruising, although the drone of the CVT automatic gearbox does let the side down when it comes to overall refinement.

Historically, the Camry has earned much of its good reputation in the United States, so it will come as little surprise that Toyota has placed far more importance on the Camry’s ride comfort than on handling prowess. 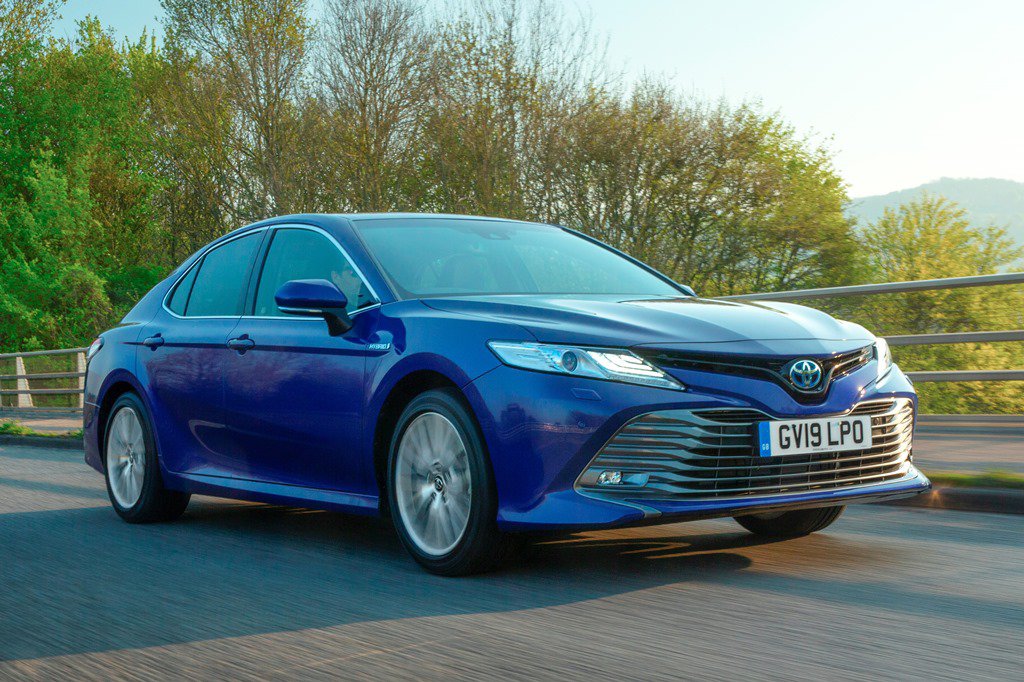 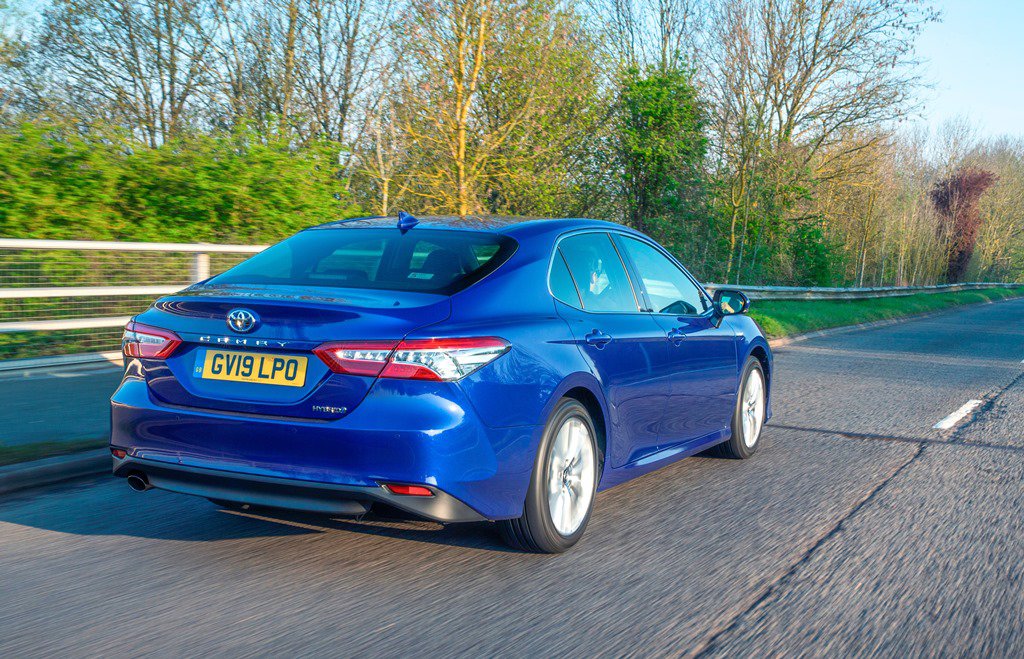 The Camry rides on the Japanese manufacturer’s TNGA mechanical underpinnings – the same basic architecture used in the Prius, RAV4 and Corolla, as well as the Lexus ES. The result is a car that handles well but falls short of offering anything in the way of thrills.

The suspension isn’t completely immune from the odd jitter at any speed, but as things do stay pretty smooth for the majority of the time, it’s a comfortable car in most situations. And while handling isn’t the focus, it doesn’t do at all badly on that score, either. Find yourself in a set of twisty bends and the Camry feels big and heavy but, considering its size, it actually changes direction pretty neatly. The steering’s particularly good, because it’s really weighty and responsive.

Unfortunately, the Camry isn’t as quiet as it might be, because you do hear a fair bit of wind and road noise at motorway speeds, which tends to negate the car’s easy-going nature just a little bit. The Toyota Camry is a capable car providing a comfortable ride and reasonably tidy handling, along with a roomy cabin, lots of luxury equipment and an efficient hybrid propulsion system.

The fact it’s a hybrid will also make it a very cost-effective option for company car drivers, especially ones who spend most of their driving time doing short, urban journeys. Long-distance fleet drivers will still be better off with a diesel, though, and that the Camry is largely an unfamiliar name in the UK, might also put some customers off.

All-in-all, though, the Toyota Camry is easy to recommend.