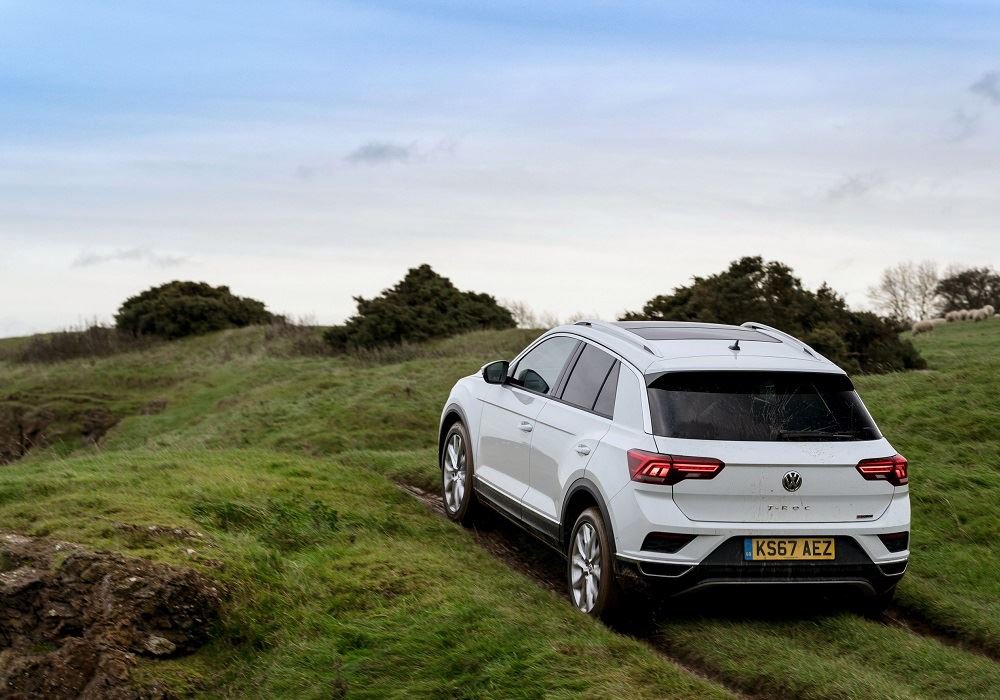 Many (guilty) have bemoaned the seemingly unstoppable deluge of crossovers or sports utility vehicles coming to market, whether it’s the ultra-compact Suzuki Ignis, the mid-sized Ford Kuga or the super-sized Audi Q7. Even Lamborghini, Rolls Royce and Ferrari are rushing head-down-elbows-out to meet SUV demand. Whether you like it or not, it’s where the money is and will be for quite some time to come. 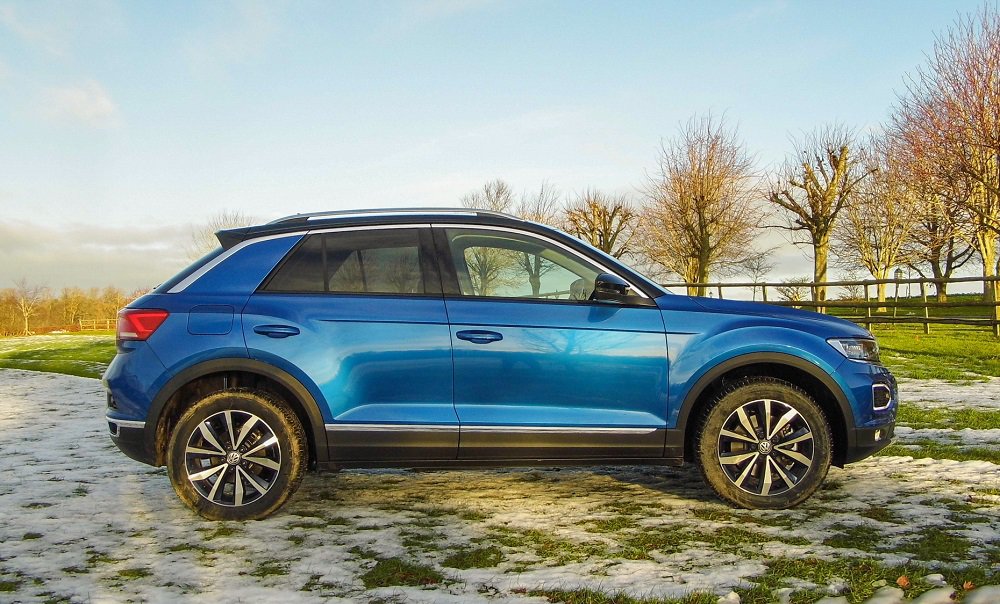 There’s no denying the numbers either as currently 27 per cent of UK/EU car sales are SUVs in one guise or another, a figure expected to rise to 34 per cent in the next five years. All resistance is, as they say, futile and in defeat, you simply roll over and await the inevitable tummy tickler to come along. Volkswagen’s new T-Roc is one such tickler. 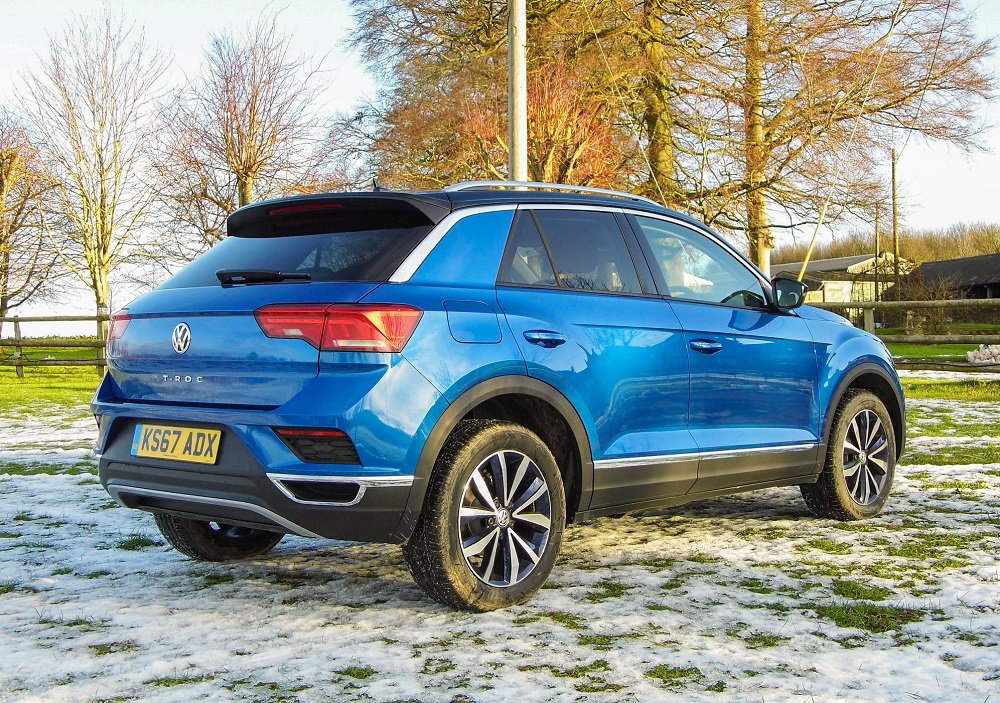 It has its work cut out though as it goes head-to-head with the MINI Countryman, Vauxhall Mokka X, Toyota C-HR, Honda HR-V and Fiat 500X, plus an endless list of supermini-based crossovers such as 2008, Captur, Arona, C3 Aircross and new Korean entrants Hyundai Kona and KIA Stonic.

It is underpinned by the MQB platform which also supports in-house VAG Group rivals such as the Škoda Karoq, SEAT Ateca and Audi’s Q2. 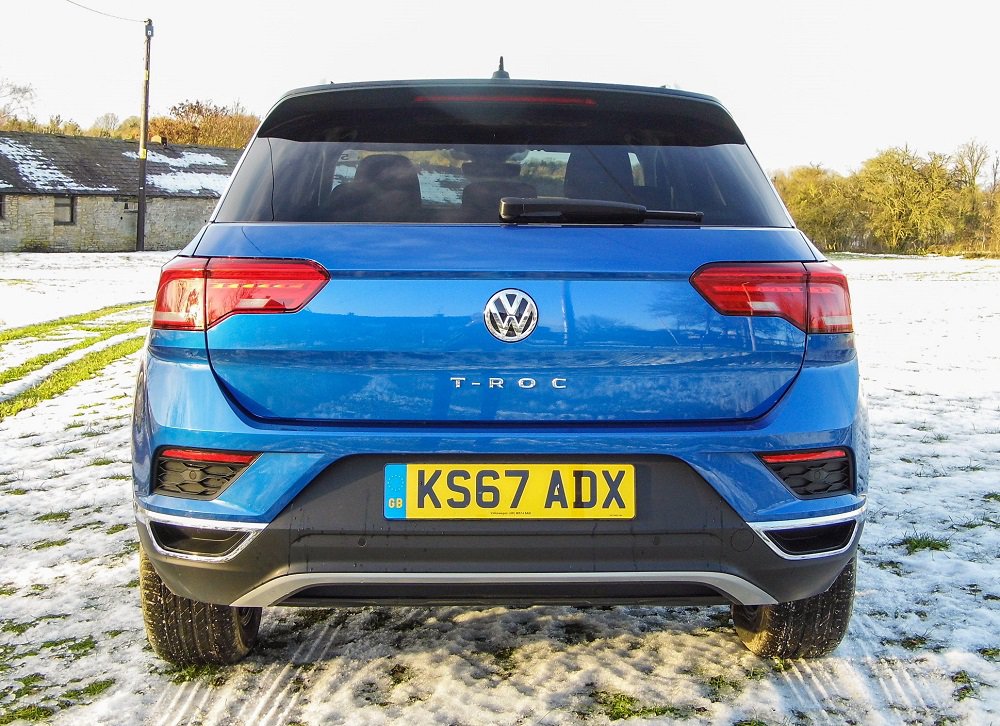 At this end of the market, looks and image are primary influences on buying decisions. Knowing this, Volkswagen is making a big fuss about the exterior of the T-Roc which explains the relatively bold exterior looks, bypassing the usual Germanic conservatism expected from VW.

Riding on a minimum of 17-inch wheels, a ride height 19mm more than the Golf and wheel arch and sill cladding, the T-Roc has purpose and gravitas.

Frankly, it’s hard to miss, especially as Volkswagen offers the T-Roc with a wide choice of exterior colours and added the ability to choose a contrasting roof and door mirrors, with up to 24 combinations of hue on offer. There’s further distinction inside too, as Design and SEL models get body-coloured trim inserts on the dashboard and door trims that bring a welcome lift to an otherwise staid interior. 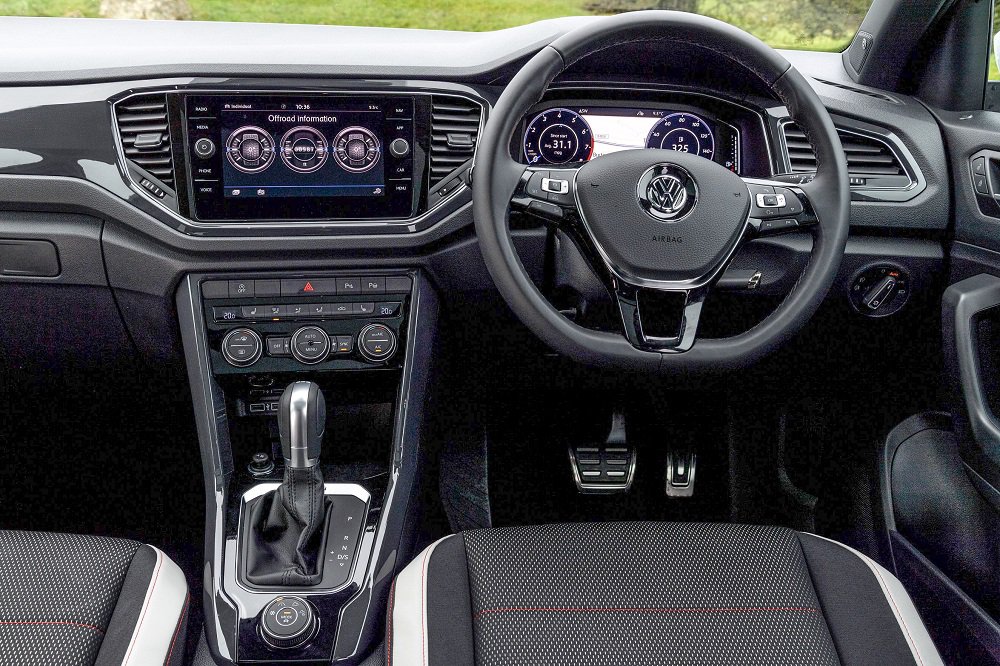 It’s the first time Volkswagen has ventured to such colourful digressions as, without them, the T-Roc’s cabin would typically be a more sensible place usually expected of VW.

The T-Roc is the first VW car developed since ‘diesel gate’ made headline news, the cost of which could well be higher than at first envisaged and must have made a huge dent in VW’s bottom line.

Nearly all of the interior plastic deployed in the T-Roc is scratchy, hard and brittle-sounding even in the upper levels of the cabin. One can’t help feeling it’s all a bit budget-led, even on the (expensive) top-end models. It’s feels and looks rather like KIA was fifteen years ago (and MG is today) and way off the quality we’ve come to expect from VW. I’m hoping it’s not the thin end of a future, cost-cutting wedge. Of little saving grace is the leather finish on the multi-function steering wheel and delightfully short-throw gear knob. 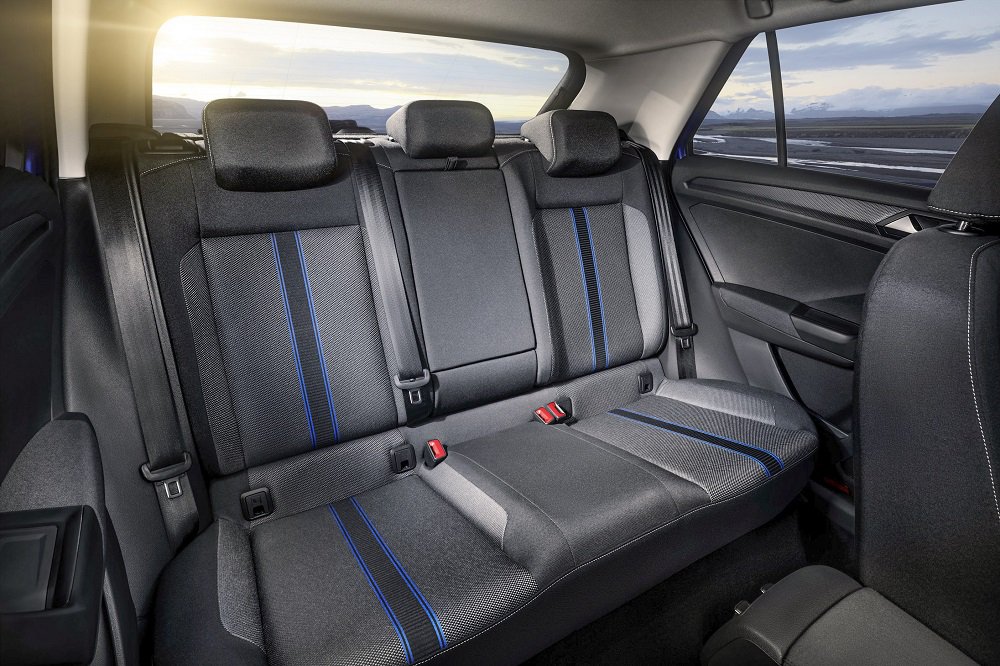 Cabin space in the T-Roc is good rather than exceptional, with emphasis on providing comfort for four people rather than five or a bigger family. Front occupants will have very little to complain about and the driving position is good and its increase in height over a comparable hatchback is part of the appeal for these type of vehicles. Head and elbow room is sufficient given the exterior dimensions.

Rear passengers might feel a tad confined, in part due to the narrow windows and high shoulder line. Legroom is adequate for grown-ups and while the two outer seats are well contoured for side support, the centre ‘seat’ is higher and suitable for a smaller passenger less in need of headroom. Boot space is a healthy 445/1,290 litres and an adjustable boot floor makes it a better lifestyle fit. 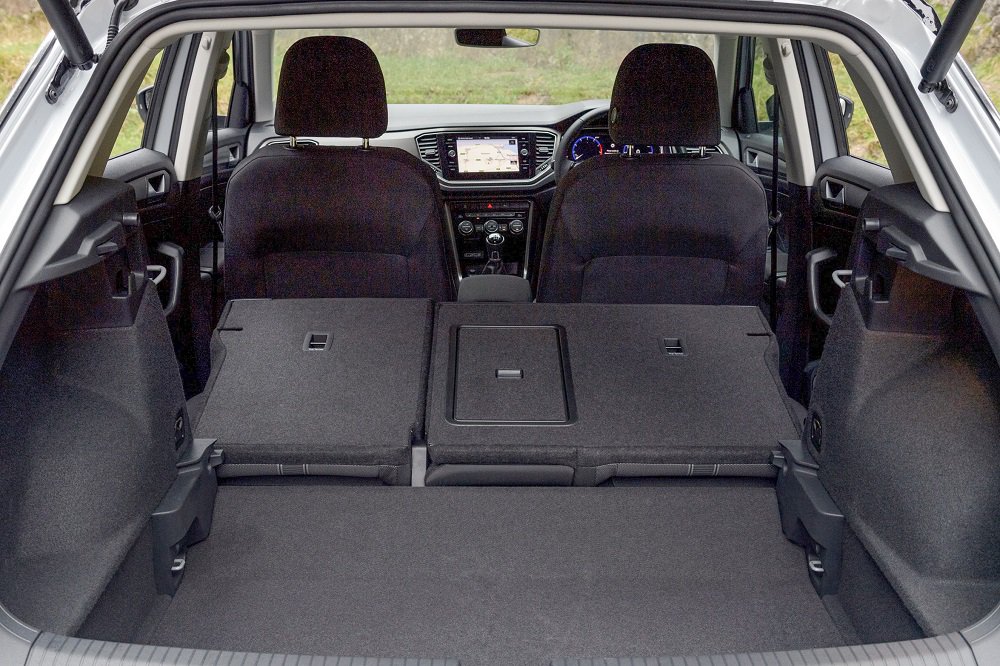 At its launch, the T-Roc will be available in just three trim grades: SE, Design and SEL. The austere entry-level S and top end R-Line trims will follow in spring ‘18. Volkswagen says it wants to meet initial demand for core T-Roc models rather than overwhelm production capacity by offering the full five-trim range at the off. 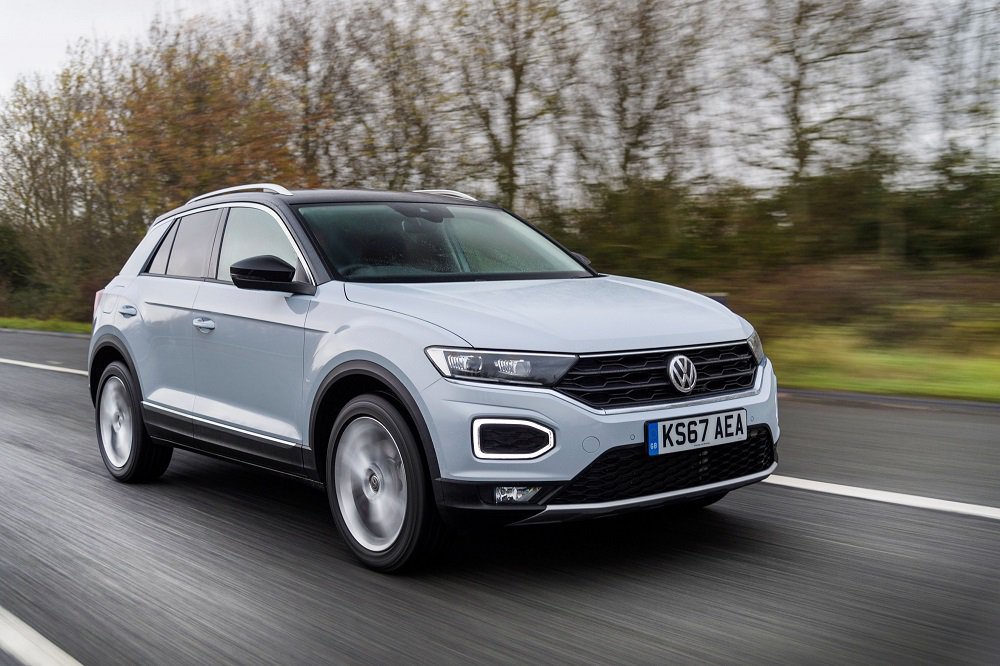 As you would expect of a VW Group product, there’s an expansive range of turbocharged engines and transmissions available on the new T-Roc SUV. There are three petrol and two diesel engines, a six-speed manual and 7-speed DSG automatic transmissions including front- and 4Motion all-wheel-drive formats.

On the TSI petrol front is a zippy and eager three-cylinder, 1.0-litre unit delivering 115ps/200Nm outputs. This is linked only to the 6-speed manual ‘box and is front-wheel-drive. Next is a four-cylinder, 1.5-litre engine with 150ps/250Nm, which may be paired with the manual or DSG gearbox in FWD or 4Motion drivetrain. The more powerful 2.0-litre engine offers 190ps and 320Nm of torque and is paired only with the DSG automatic and is 4Motion all-wheel-drive.

Diesel choice is a little more limited with just the 1.6-litre (115ps/250Nm) and 2.0-litre (150ps/340Nm) TDI units. They both offer strong, low-down grunt but like many latter-day diesels tend to be a bit ‘Alan Carr Chatty Man’ when cold. Both engines are paired with the 6-speed manual gearbox driving the front wheels, but the stronger 2.0-litre is also available in manual form with 4Motion AWD, or DSG front-wheel drive.

The best of the petrols is the 1.5-litre in manual front-wheel drive. It offers more than enough power for everyday enjoyment. Considering the family nature of the T-Roc, the 2.0-litre petrol may be a bit of overkill.

There were no diesels available during the media launch test drives but both available oil-burners are very well tried and tested in other VW and Group products. 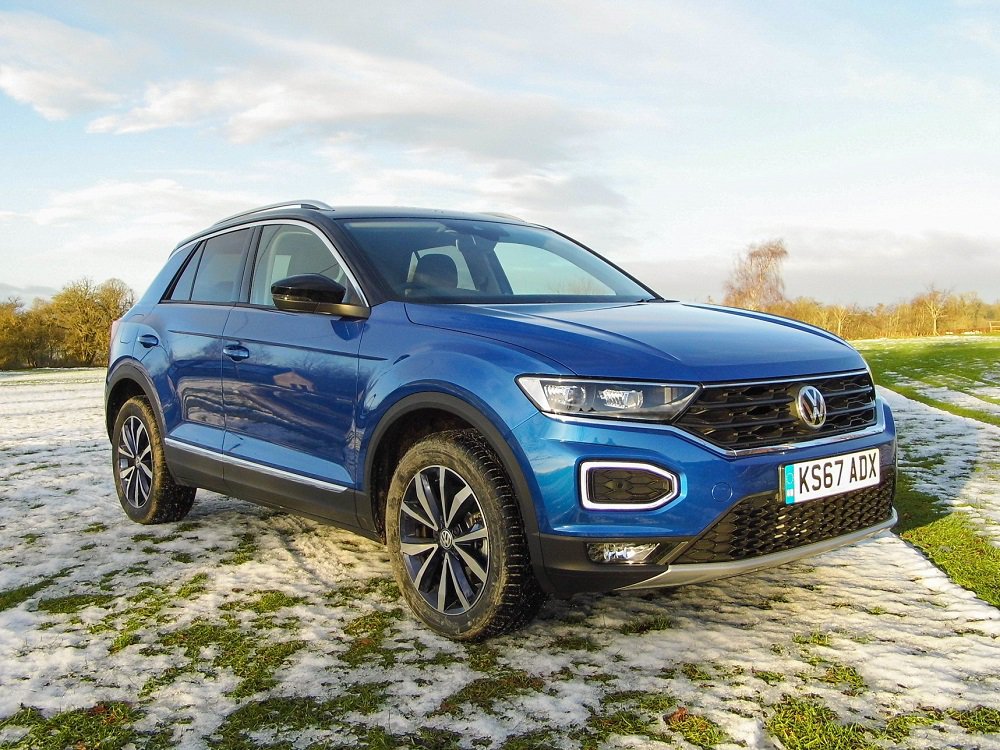 During yesterday’s product presentation, VW told us that the T-Roc chassis and suspension were tuned by the same chap responsible for the feral Golf Clubsport S and that the T-Roc retained some of those characteristics in its driving setup. It doesn’t, fortunately.

On the road, the T-Roc is a safe pair of hands. It isn’t a bad car to drive – far from it. It’s just not very engaging or involving. Following current industry trends, the steering is light but sharp and the ride is compliant. The rear does become a little undone over crusty surfaces and when hard pushed, the T-Roc does better on twisty roads than much of its opposition. Grip isn’t MINI like and – being the nature of the SUV beast – there is a degree of body roll under pressure, but the overall balance is good, even without the optional dynamic chassis control fitted. 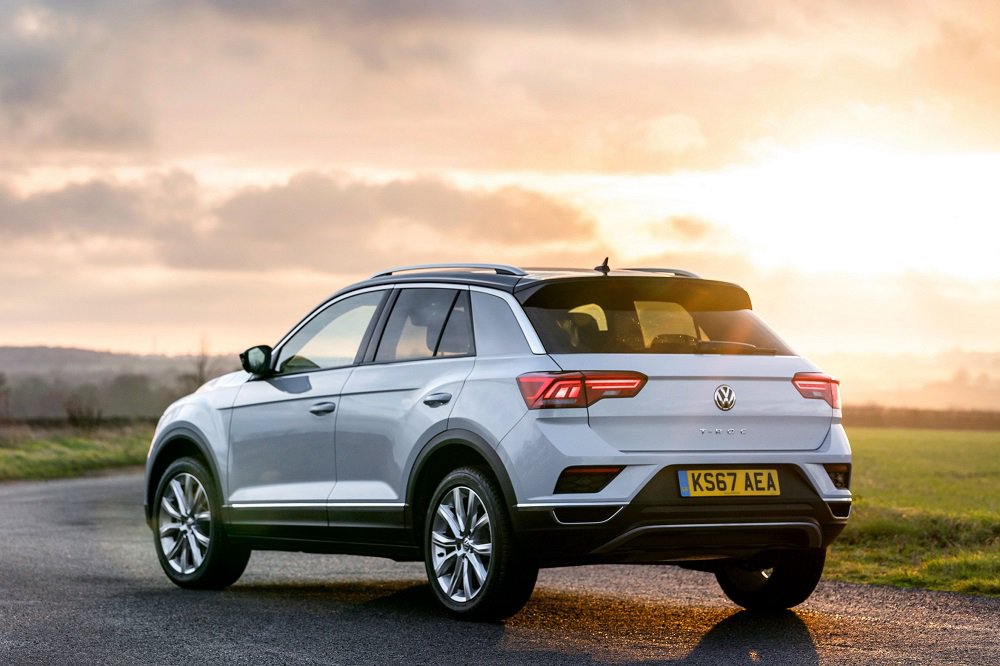 That VW will sell thousands of T-Rocs over the coming years is pretty much a given. Public hunger for crossover and SUV type cars is insatiable and will apparently get stronger. VW’s emphasis on personalisation with bright colours and contrast roof options is uncharacteristic for an automaker usually regarded as subtle, sensible and reserved.

The T-Roc is a viable option for those wanting to extract themselves from their hatchback and into something more practical. It looks good, is a safe, competent drive and should be an agreeable lifestyle fit.

Even SUV cynics might turn tummy up with this one. *cough*

Take a look at our latest Volkswagen T-Roc lease deals

The latest small SUV to emerge from VW will be based on their Polo...