Recently, a video was uploaded to YouTube that showed an all-wheel-drive Lamborghini Aventador and a Tesla Model X P100D in a quarter-mile drag race. Quicker off the line than the Lambo, the Model X left it behind for most of the run, with the Lambo bearing down on it fast. At the line, the Tesla was 0.05 seconds quicker, despite the Lambo being 544kg lighter. Impressive stuff, but more on that later.

Tesla began making all-electric powered cars back in 2007 with the Tesla Roadster, which was heavily reliant on the Lotus Elise as its donor car. During its four-year production run, a mere 3,000 Roadsters found homes around the world. In contrast, Tesla manufactured over 76,000 cars last year alone – a figure made up largely by the impressive Model S saloon, the global success of which continues unabated.

While initially scheduled for an early 2014 launch, production of the third Tesla – the Model X – eventually began in 2016 and reached our shores in February this year. The Model X is an all-electric, two- or three-row SUV, built alongside the Model S in Fremont, California. The X shares much with the S, including significant parts of the chassis and the aluminium structure, plus the electric motors and the battery pack. Style-wise, the Model X is pretty uninspiring and in profile, has the shape of a hatchback with trapped wind. At over five metres in length and almost 2.3 metres in width, the Model X is a large car. But on first inspection, the lekkie SUV looks far less imposing than you’d expect. It’s certainly bigger than its Model S sibling, but doesn’t have the visual gravitas of a Range Rover, Audi Q7 or Volvo XC90. The X is a low, rounded SUV and uses Tesla's most recent design language, with a blank-looking face and small moustache-style grille.

The minimalist shape is disfigured by the car's party trick – the two falcon wing rear doors that open upwards allowing unfettered access to rows two and three. They pivot in the middle to enable them to open in tight parking spaces and underground car parks. Their operation does deliver the requisite level of showmanship and the car looks Ninja-ish with both doors open to the heavens. The Model X is undeniably a large car, but clever packaging of the batteries and motors means it has an incredibly spacious cabin. The absence of a conventional engine and gearbox allows for a completely flat floor inside the vehicle, with no bulky transmission tunnel to consume foot space.

The dashboard is designed to closely resemble the Model S saloon and is dominated by two large touchscreens. The centre console houses a huge 17-inch portrait display, while a second, more modest screen appears behind the steering wheel replacing a more conventional analogue dashboard. Together, they allow the driver to adjust most of the car's settings, including the sat nav and autonomous modes. This means there are very few buttons and the cabin as a whole feels minimalistic and uncluttered. Unfortunately, while the interior may well be packed with incredible technology, the quality of the materials deployed throughout the interior have a budget feel and look about them and are certainly not as premium as the car’s price would have you expect.

Nonetheless, the Model X offers a huge amount of space and buyers can choose between the standard five- or optional six- or seven-seat layouts over two or three rows. I particularly liked the large panoramic glass windscreen which provides an expansive vista out the front. 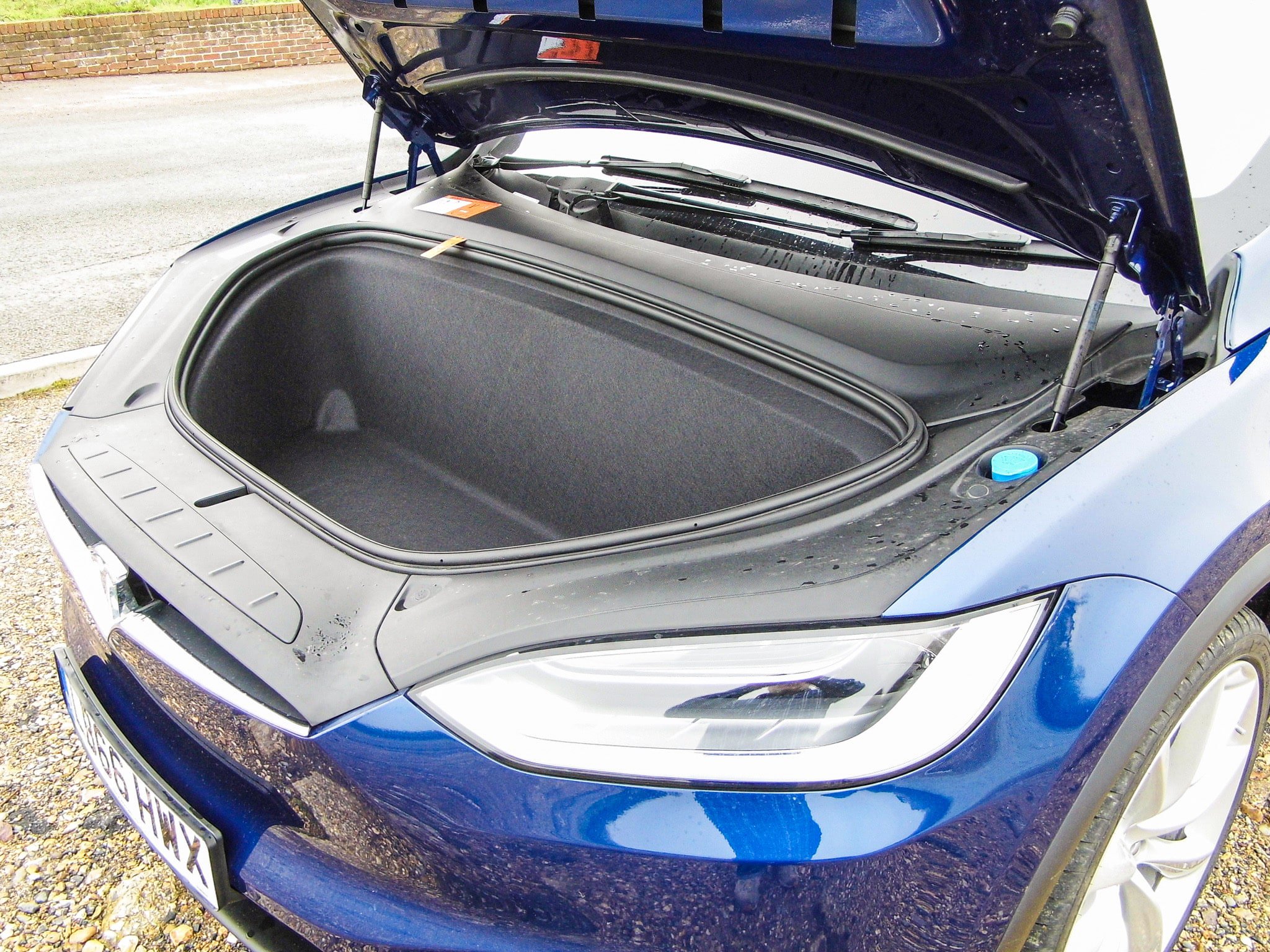 There are currently three kiloWatt/hour power grades available in the UK’s Model X line-up – 75D, 100D and P100D. All models are permanent all-wheel drive, courtesy of a pair of electric motors, one powering the rear wheels and one for the front pair. However, that doesn't mean you'll go too far off the beaten track, because ground clearance is minimal and it doesn't have the suspension travel or under body protection to cope with conventional off road terrain.

The entry-level 75D offers 75kW/h and a range of around 250 miles under normal driving conditions. The 100D offers (you guessed it) a healthy 100kW/h of power and will travel around 350 miles before requiring a re-charge of batteries. The P100D also offers the same power output but is available with ‘Ludicrous’ mode as standard. Somewhat naturally, if you activate Ludicrous mode on a regular basis – a tempting proposition, I assure you – your available range is significantly reduced, so you’d be well advised to pick your traffic light conquests very selectively.

At least you (currently) get free use of Tesla’s nationwide Supercharger network of fast chargers, which can add around 170 miles of range in just 30 minutes. The Model X is yet to undergo the rigid EuroNCAP safety testing, but the Model S – with which it shares much of its technology – received a full five stars back in 2014, so there is every reason to expect the Model X to receive the same level of safety. Eight surround cameras allow for 360-degree vision, while twelve ultrasonic sensors provide detection of surrounding objects. Active safety technologies such as collision avoidance and automatic emergency braking have been implemented by over-the-air software updates. Slam your right foot on the accelerator and the Model X’s torque is instant, seamless and unrelenting. Overtaking ability is astonishing and the optional (but expensive) ‘Ludicrous’ mode is exactly as advertised, even though it really is just a quick and expensive party trick. Happily however, its performance story doesn’t end with straight line speed.

The Model X features a composed ride at all its variable ride heights and is easy to handle. The suspension is compliant and not overly stiff, but the Model X lacks the dynamic prowess of the BMW X6 and commanding driving position of a common-or-garden Range Rover.

Through the bendy bits, excellent grip is accompanied by low noise levels – a prerequisite when driving an electric car. However, around town the 22-inch wheels present an element of compromise over crusty urban surfaces. Best leave them on the options list and stay with the standard 20-inchers. The Tesla Model X blends full-on family practicality with the kind of performance to please the most performance-obsessed. This is a car that weighs two and a half tonnes but can hit 60mph in 3.2 seconds from a dead start. When needed to, it can tow a caravan of up to 2,270kg - and do it comfortably with its dynamic air suspension.

Combine the myriad of technological innovations with a genuine 250-mile range and a ridiculous turn of speed and it’s easy to share Elon Musk’s excitement about the Model X. It’s just a shame about those low-rent interior materials.