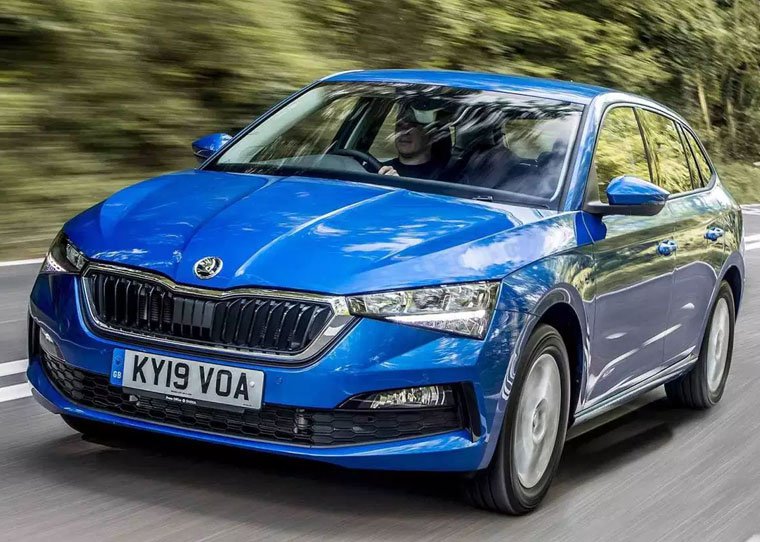 ➤ The Scala is the Czech carmaker’s first all-new car since 2017 and Skoda’s most competitive family hatchback offering yet.

The Scala replaces the Skoda Rapid, the sales of which were anything but. It sits between the Skoda Fabia and Skoda Octavia in the UK product line-up. As SUV and crossover sales continue to steamroll global markets, the Scala’s release shows that Skoda still sees the value in more conventional family hatchbacks. 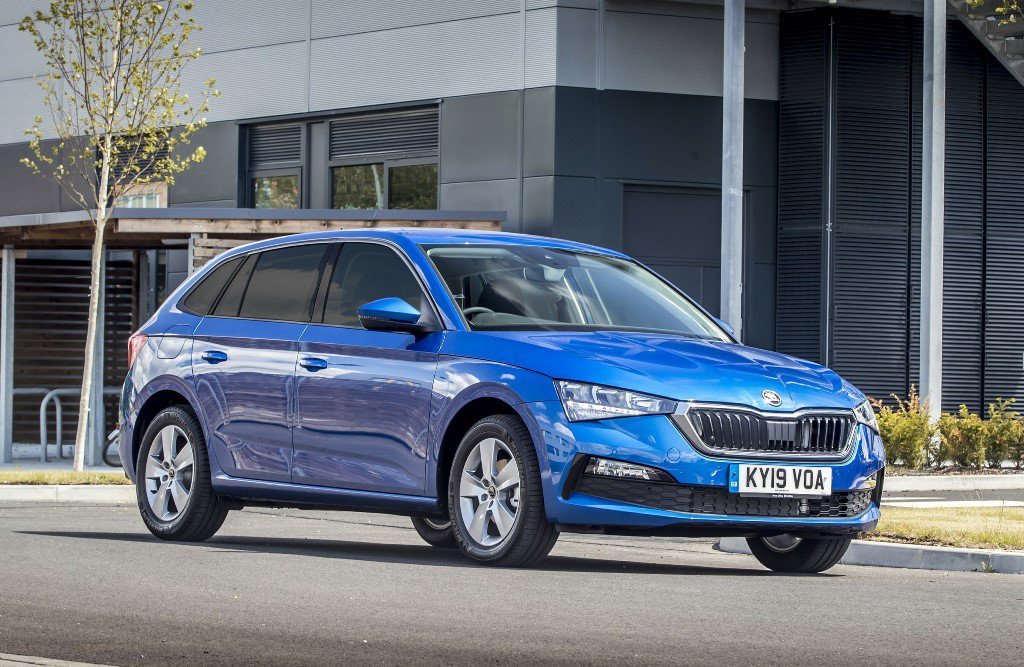 In the family hatchback class, the Scala faces an expansive range of rivals, including the Volkswagen Golf, Ford Focus, Vauxhall Astra and the SEAT Leon. Very competitive lease rates make it a viable alternative to the Hyundai i30, KIA Ceed and Toyota Corolla, plus B-sector models like the Volkswagen Polo and SEAT Ibiza.

Skoda has given the Scala much bolder styling than the rather dour Rapid. The front end features a wide grille and pointy headlights - which are LED units even on the entry-level model - and, in the side profile, there’s a nice chrome kink that follows the window line. At the rear, the tail-lights spread across the width of the tailgate, the top half of which may be a full glass panel, should you prefer. 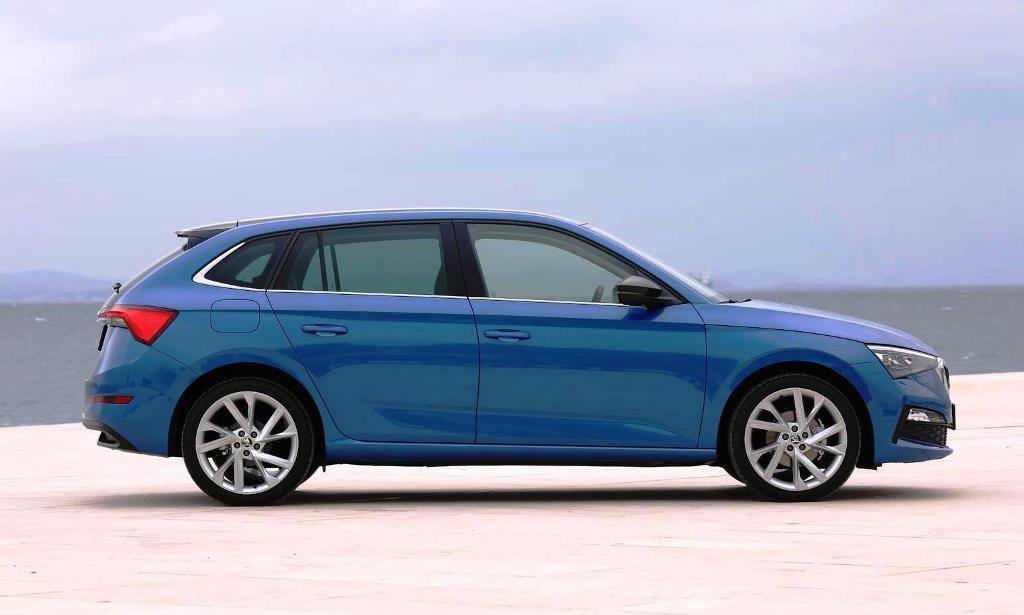 The no-nonsense cabin is one of the more appealing aspects of the Skoda Scala. All models offer an infotainment screen, but high-spec models offer a super crisp Amundsen touchscreen. Skoda has sensibly decided to retain buttons for the touchscreen shortcuts and the climate controls, so you don’t have to navigate through menus just to change the temperature.

Overall, the interior isn’t quite as plush as a Volkswagen Golf, but its lower price means you don’t feel short-changed. Material quality is markedly better than the Rapid because Skoda has placed less-expensive but more durable materials lower down, so you don’t notice them as much. The main touchpoints, like the door armrests, are made of a more luxurious soft-touch material. 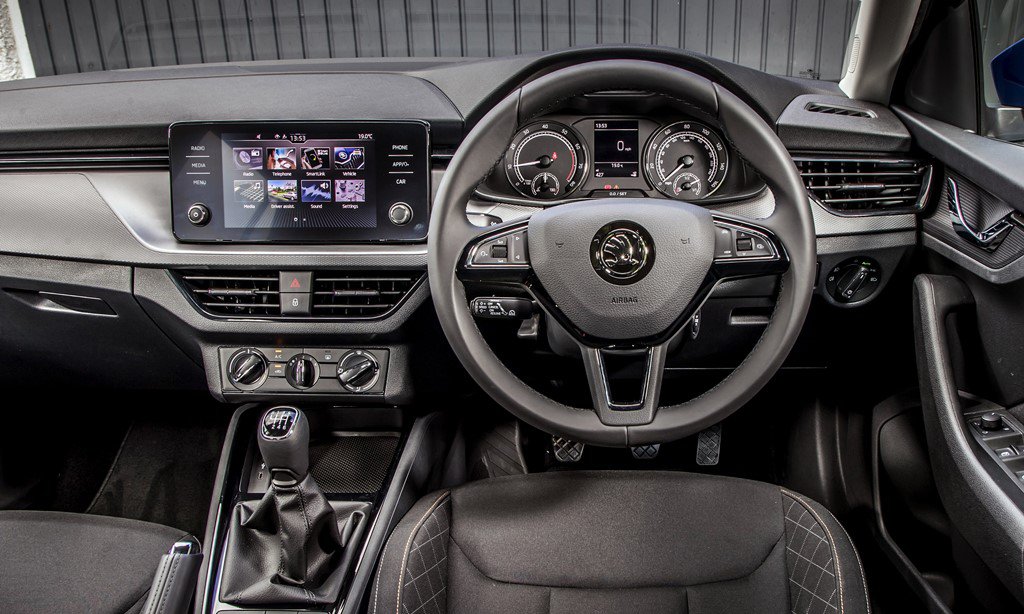 Another plus for the Scala is the level of space on offer. Front and rear passenger space is superb, affording generous leg and head room – even with the optional panoramic sunroof in place. There is a chunky central tunnel – which robs foot room for those sitting in the middle of the rear – but it’s not enough to spoil the Scala’s excellent mark for practicality.

Despite the competitive leasing rates, no Scala is sparsely equipped. The range kicks off with the S trim which features all-round electric windows, air conditioning, a 6.5-inch infotainment screen with DAB radio and Bluetooth, 16-inch alloy wheels and LED headlights. Step up to SE, which is proving to be the most popular spec, and Skoda adds cruise control, rear parking sensors and a larger eight-inch screen with Apple CarPlay and Android Auto connectivity.

There is no word yet if a high-end Monte Carlo or even the luxury Laurin & Klement trim grade will join the Scala line-up any time soon. This is unlikely though, as their respective leasing rates will elevate the Scala into Optima territory, away from its value-led character. All other VW Group cars were rated the top five-star score by Euro NCAP and it’s reassuring that the Skoda Scala follows suit.

It features a range of systems designed to prevent you having a crash, such as automatic city braking and lane-keep assist and offers many airbags and automatic emergency services contact if you do have a collision.

You can order extra features like adaptive cruise control and rear cross-traffic alert from the options list. 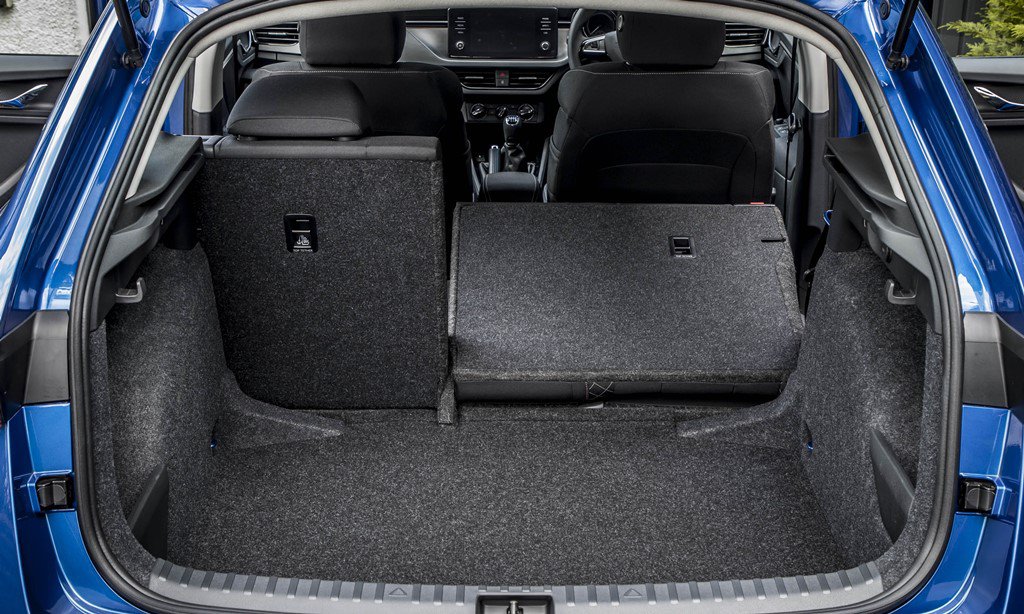 Despite being slightly longer than the Volkswagen Golf, the Skoda Scala doesn’t use that car’s platform. Instead, it shares underpinnings with the less expensive Polo and Fabia, albeit a stretched version of that architecture. The result is a much bigger boot than the Golf; at 467 litres, capacity is almost 90 litres more with the seats up, or 140 litres (1,410) when folded down.

The boot floor can also be adjusted which allows a hidden storage compartment plus, the lip at boot entry is minimal, making it easier to slide heavy items in. Three petrol engines are currently available in the Scala line-up. There is a 1.0-litre turbocharged triple-pot offered in 94- and 113hp. Only a five-speed manual gearbox is offered on the lesser-powered unit, while the latter may be paired with a six-speed manual or a seven-speed DSG automatic.

There’s also a 1.5-litre four-cylinder engine with 148hp (six-speed manual or seven-speed DSG auto) that manages 0-62mph in 8.2 seconds, while the 113bhp version of the 1.0-litre manages the sprint in a reasonable 9.8 seconds. To be honest, the 113hp engine feels plenty quick enough in the middle of the rev range. On the diesel front, there is just the one oil-burner – a 1.6-litre TDI that has seen extensive service throughout the VW Group product range. Paired with either the 6M or 7DSG auto gearbox, the engine is tuned to deliver 113hp and buyers are likely to be high-mileage drivers who need the slightly better fuel economy.

Avoid the costly and superfluous adaptive sports suspension – the Scala is not a sports car. Stick with the Scala's standard suspension and you'll find nothing to grumble about. It has a soft, cosseting setup that keeps life impressively comfortable, whether you're crawling along pockmarked urban streets or cruising along motorways. There is enough control in the suspension to prevent the body from excessive movement on undulating roads, or from leaning over too much in the bends, making the car feel suitably tidy and stable. Sure, it's not the sharpest-handling hatchback you'll ever drive (see Ford’s Focus), but the comfort level enjoyed is easily worth that trade-off.

A big step up over the previous Rapid, the Scala is an accomplished family hatchback that – although not a genuine Golf or Focus rival – is a serious alternative to the likes of the KIA Ceed and a plethora of others. It majors in space, cabin quality, technology and safety kit, plus the Volkswagen Group connection could draw in customers looking for a cut-price Golf alternative.

The Scala’s attraction is negated somewhat with the higher-priced SE-L model. The same monthly leasing cost buys an awful lot of talented alternatives and seems at odds with Skoda's value-focused ethos.

As much as the SE-L's niceties appeal, it's the mid-range SE that strikes the better balance, particularly when matched with the 1.0-litre 113hp TSI petrol engine and the smooth-shifting DSG automatic transmission.

Pick yours in a strong, bold colour and you've got a spacious, practical and comfy family hatch that still cuts a dash.