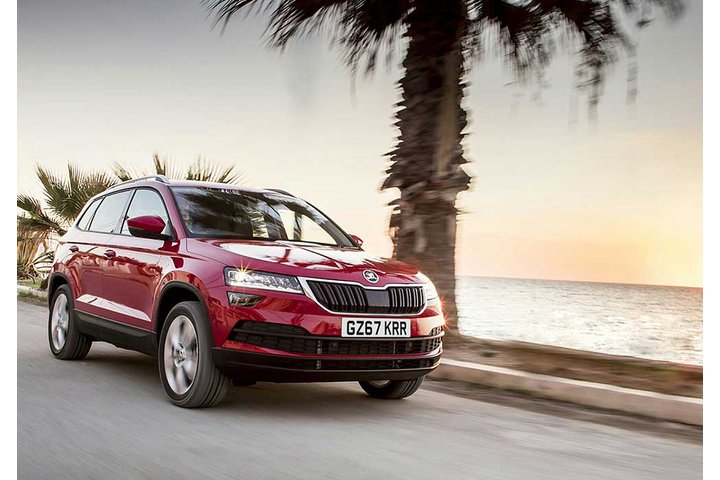 Following its public debut at the 2017 Frankfurt Motor Show, local sales of the Skoda Karoq began in early 2018. The latest Skoda to join the UK model line-up is a compact SUV which rides on the Volkswagen Group’s MQB platform and replaces the popular and trend-setting Yeti after its nine-year run. The new Skoda Karoq is the sister model to the Volkswagen T-Roc, Tiguan and SEAT Ateca.

Adhering to my journalistic duty to inform, the name Karoq comes from the Aleuts, the native inhabitants of the Alaskan island of Kodiak. It is a combination of words ‘Kaa'Raq’ (car) and ‘Ruq’ (arrow). 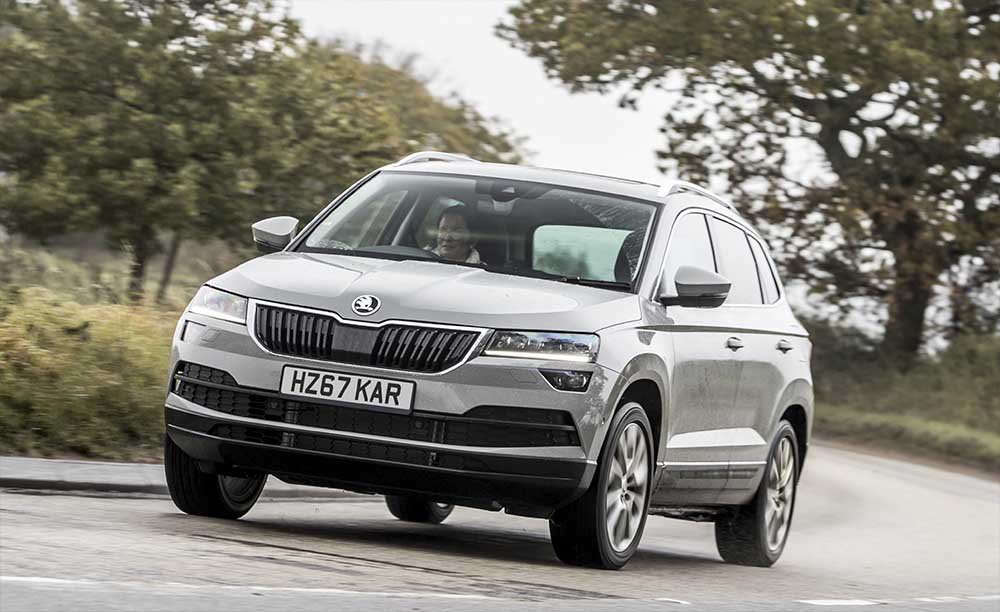 A replacement for the Yeti is may be, but in terms of styling, the two cars couldn’t be further apart. Being a product of the Noughties, the Yeti divided opinion with its eccentric, Tonka Toy design. However, the Karoq wears a far more conventional SUV design with its tall stance, slightly embellished wheel-arches and chunky lower body cladding which – at the moment – could easily be mistaken for any number of VW Group products.

Mimicking the Audi school of design, the five-seat Skoda Karoq is a ‘mini-me’ of the larger, seven-seat Skoda Kodiaq – one of the very best examples of its class. Its smaller size makes the Karoq a bit less expensive and sportier in many respects than the Kodiaq, even without the hint of Nepalese folklore enjoyed by its Yeti predecessor. 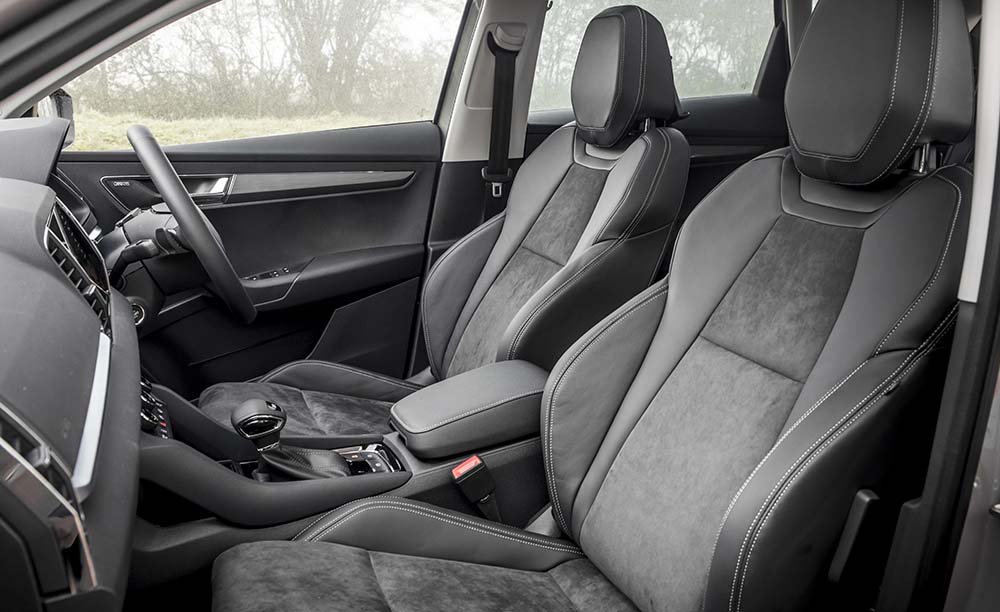 It isn’t many years ago when there was distinct divide between Skoda interiors and those found in purportedly more upmarket Volkswagen Group products…less so these days. Most materials deployed in the Karoq’s critical touch zones are soft and although there are more relatively hard surfaces than found in your average latter-day Audi, not for a moment do they detract from the feeling of durable, high-quality construction and assembly.

The driver’s seat and steering wheel offer a wide range of adjustment allowing pretty much everyone to find a comfortable driving position and attain a good view of the road ahead. 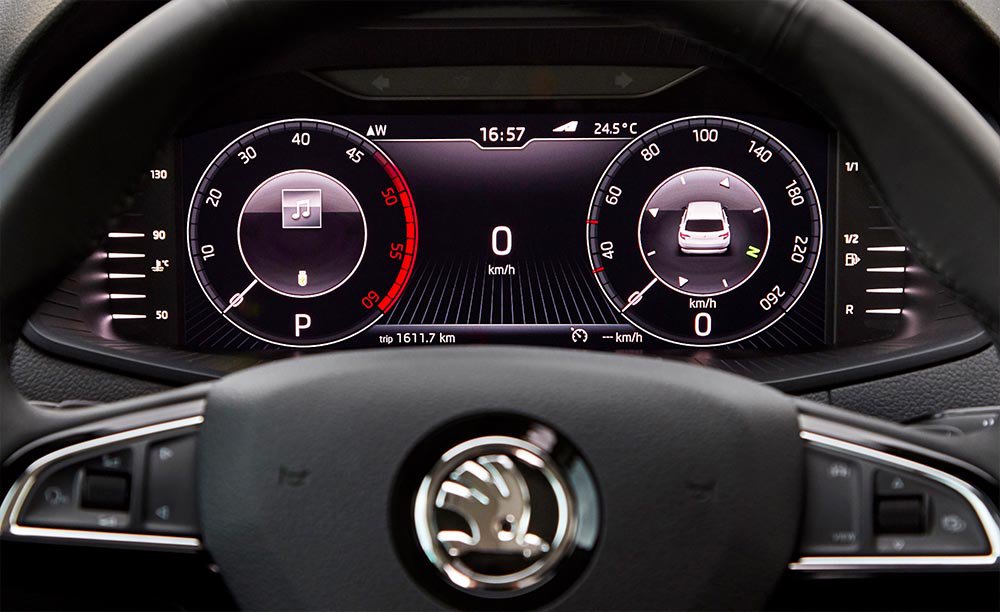 Upper trim models feature a large touch-screen infotainment system which incorporates sat-nav. The overall appearance is one of class and the quick responses to touch and logical menus make it fairly intuitive to use when you’re on the move. Other VW Group influences are evident in the quality switchgear which is the same as deployed in an Audi – which is no bad thing. 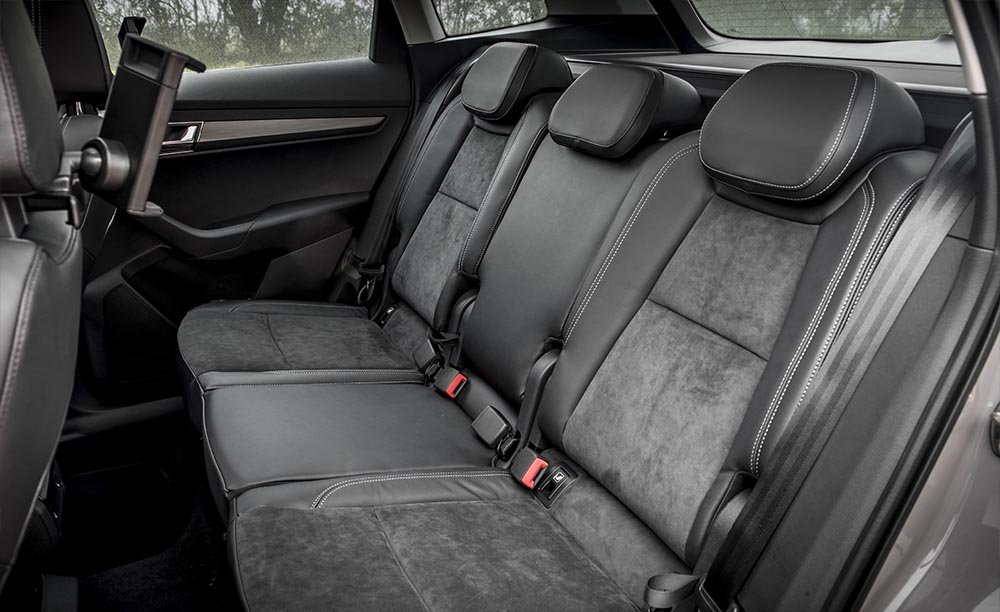 There are three core trim levels available on the Skoda Karoq, the familiar SE, SE L and Edition, plus the fleet-focused SE Technology. 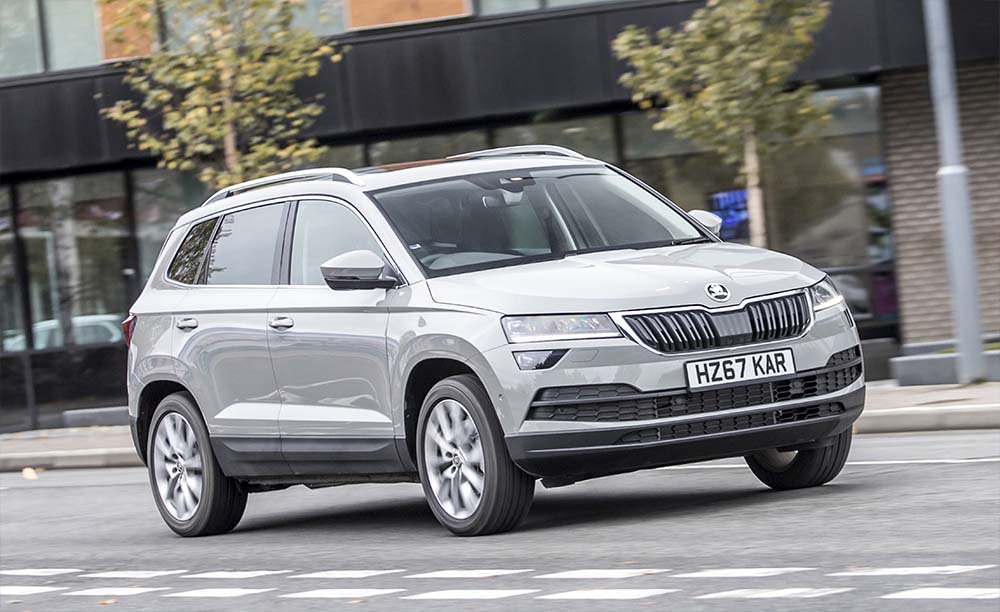 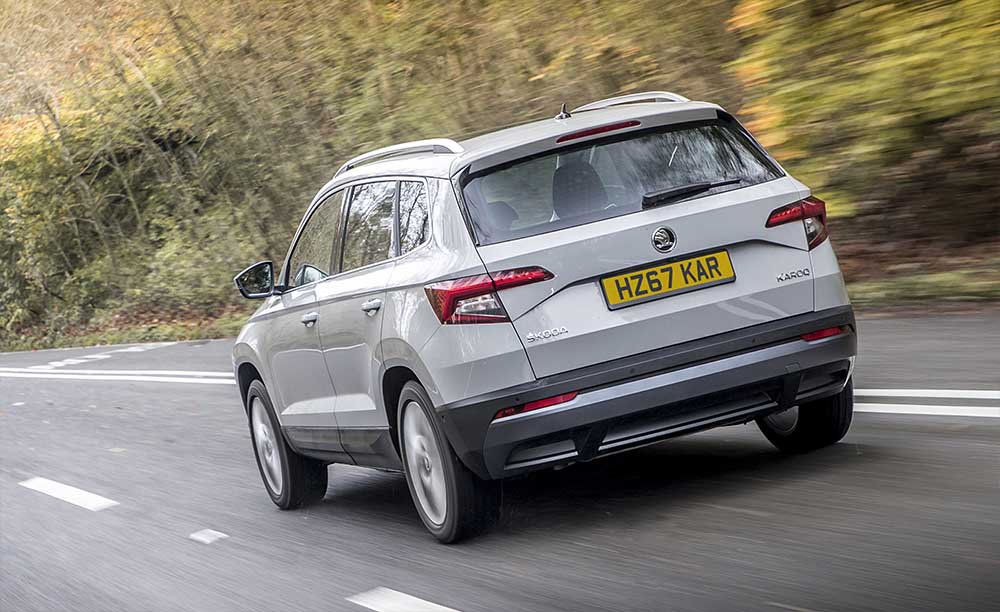 The engine line-up available for the new Karoq covers most bases demanded of our busy lives. There are two petrol and two diesel engines from which to choose: the first, a 114hp 1.0-litre three-cylinder petrol engine is supplemented by a stronger and smoother 148hp 1.5-litre four-cylinder engine. The two diesel engines are both four-cylinder units of 1.6- and 2.0-litre capacity, the latter only available with four-wheel-drive.

Despite pulling the additional weight of all its four-wheel drive bits and bobs (not a technical term), the 2.0-litre diesel still feels very strong in the middle of the rev range and is perfectly capable of getting the Karoq around at a decent pace without having to work it too hard. It’s not the smoothest engine of its kind, however, producing a bearable level of vibration over 2,000rpm and it also drones quite noticeably at motorway speeds. 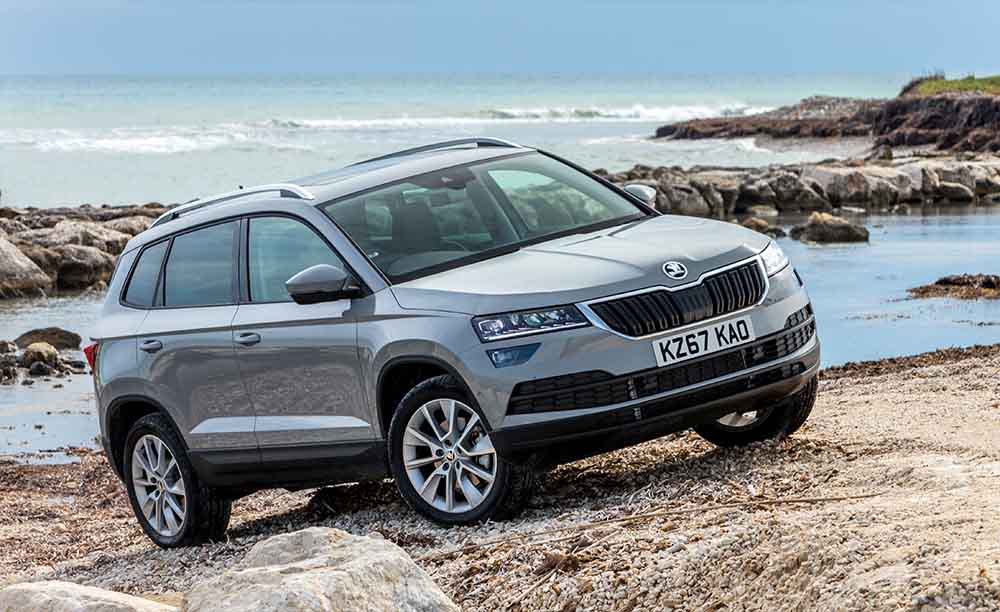 Next to the diesels, the three-pot 1.0-litre petrol can feel a little breathless on occasion, but rarely feels overwhelmed. Surprisingly, make quite a bit of noise but, to its credit, it's smooth and hushed when cruising on the motorway. However, the moment you start to work it hard and enter the upper reaches of the rev range, you’ll be met by a coarse and audible rattle.

The larger 1.5-litre four-pot has enough get-up-and-go for everyday use most of the time, but when loaded with passengers or with stuff in the boot, it can sometimes struggle at low revs, requiring more gear shifting than would be ideal.

If, like me you don’t mind changing gears the old-fashioned way, then the six-cog manual gearbox is a pleasure to use. The gear change is nicely weighted and has a pleasingly precise action. The seven-speed automatic is fine when getting up to speed and bolting seamlessly between gears, but its initial pick up can be a tad jerky, which isn’t ideal when trying to squeeze the car into a tight parking space and other, more precise manoeuvres. 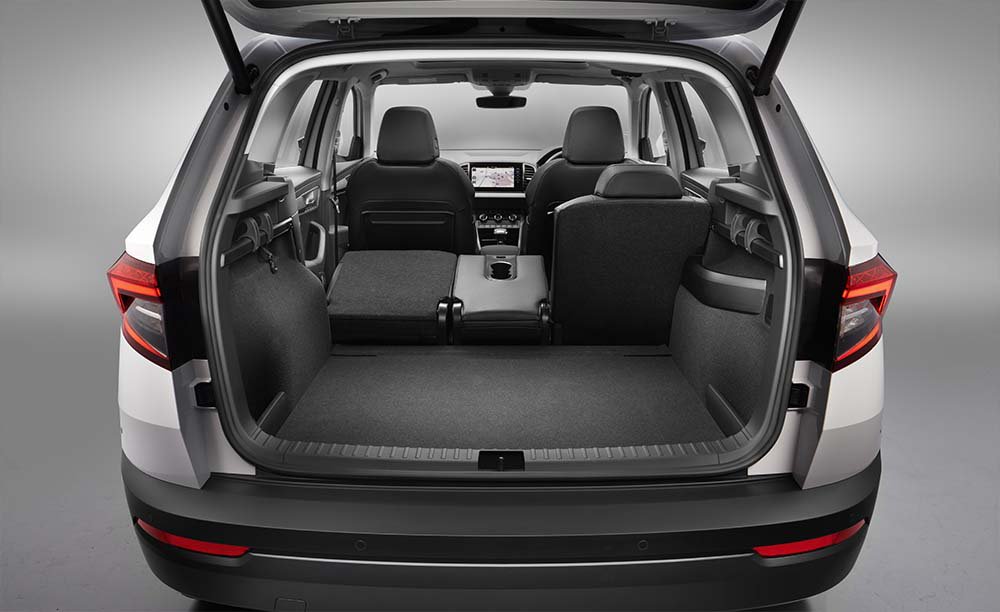 Families will be reassured that the Skoda Karoq was awarded the full five-star score for crash safety by Euro NCAP in late 2017. It’s fitted with an impressive array of safety equipment and actually beat the scores of the larger Skoda Kodiaq. 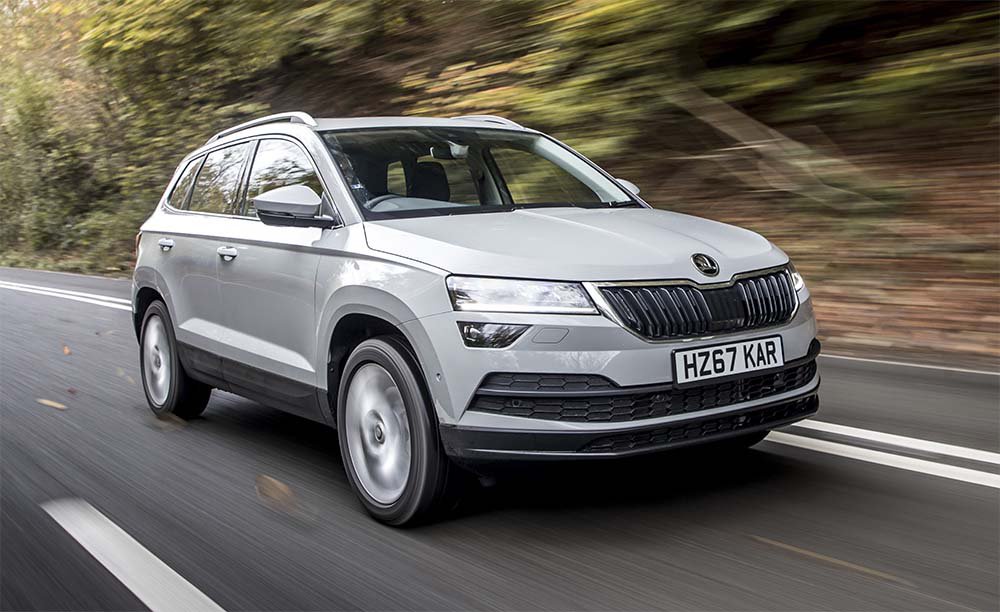 Despite sharing a platform (and many mechanical components) with the SEAT Ateca, the Skoda Karoq feels significantly different to drive. Rather than making the car feel sharp and overly sporty, Skoda has engineered the Karoq to be soft and comfortable, which better suits its overall character, to be honest. That’s not to say it’s not nice to drive, it just has a rather more laid back way of going about its business.

The steering for example, while accurate and well-weighted, isn’t particularly sharp or communicative. You still get a good idea of how the car is behaving, but it’s not up there with the SEAT Ateca or Ford Kuga for example.

In normal driving conditions, the Karoq flows appreciably from corner to corner and, despite its relatively large size, is easy to pilot through narrow city streets and tighter, ninety-degree turns. Push on with some gusto into corners and you’ll start to notice a higher degree of body roll than perhaps you might expect, but never to extent where it feels wayward or unsafe. 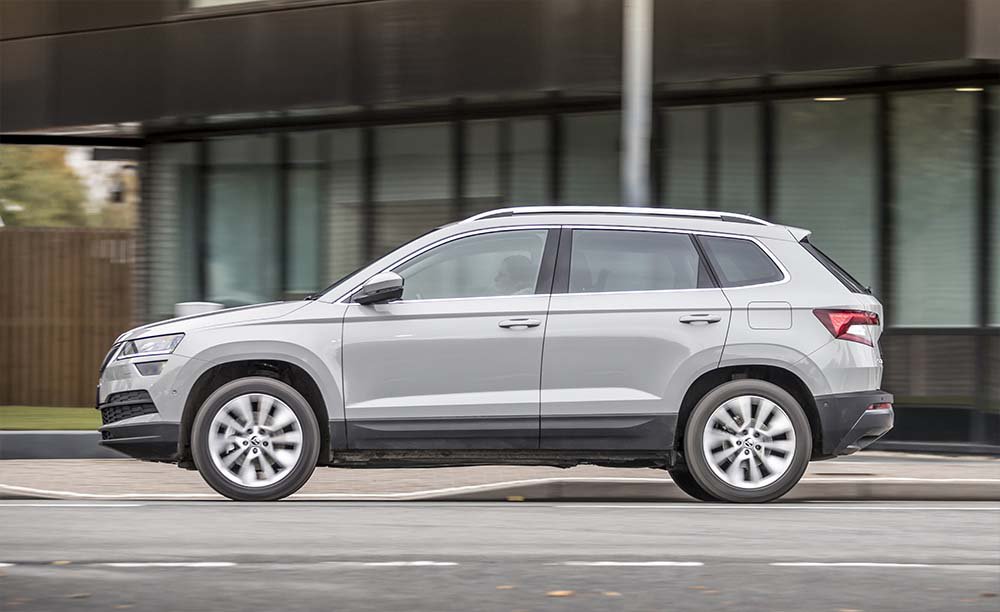 Grip levels are fair to middling for a car in this class and when you do run out of purchase, there’s just enough feel in the steering wheel to let you know the front of the car is beginning to push wide of the intended line.

The Karoq’s off-roading credentials will be more than adequate for the vast majority of customers, with hill-descent control and an off-road drive mode fitted as standard on 4x4 models. 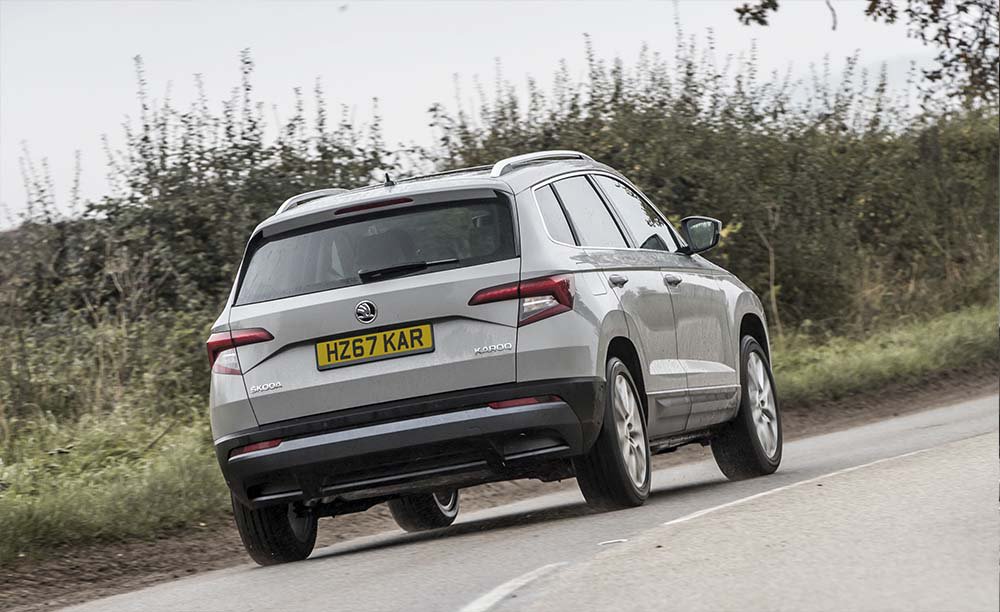 The new Skoda Karoq boasts many virtues and few shortcomings. Although it lacks the character of the Yeti it replaces, the Karoq was developed to provide exactly what SUV buyers want.

No, it doesn't drive as well as the SEAT Ateca, but in almost every other way it's a winner…the excellent practicality, the easy-to-use tech interface and the spacious and well-appointed interior. If you can get over its anonymous looks, the Karoq is the thinking person's compact SUV.