Peugeot 5008 Review: A return to Gallic style and substance

The original seven-seat Peugeot 5008, introduced in 2009 was an MPV of some gravitas. With all the space a large family and their pets could ever need, coupled with a quality interior and futuristic exterior design, it won several design awards and extracted accolades from the some of the most acidic automotive media. There were only a handful or so genuine family load luggers around at that time, but the buying public warmed to the French MPV and for several years it enjoyed sales success in markets around the globe.

As the SUV/crossover boom resonated through the automotive industry in the earlier part of this decade, MPV sales declined somewhat, resulting in the production of the 5008 coming to an end in early 2016. Unbeknown at that time, it would be nearly two years before its replacement was to arrive. 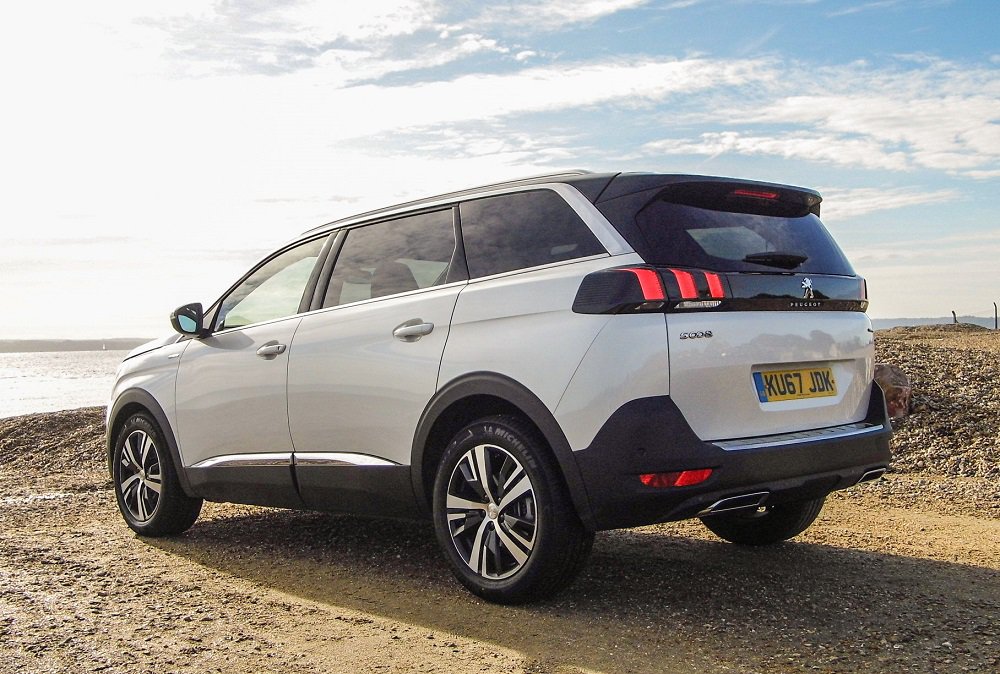 We found out why in the autumn of that year, when Peugeot pulled a blinder in launching the new and eccentrically styled 3008 five-seat SUV, which oozed style and flair. It also offered an updated version of their unique, space-age i-Cockpit interior, first seen on the new 308 hatchback. It dramatically set the stage for the arrival of the all-new and equally anomalous seven-seat 5008 SUV a little under a year later.

It was worth the wait. Like the 3008, the 5008 has morphed from being an MPV into an SUV, which is the way of the current market. It’s a repositioning that Peugeot hopes will pay dividends on the 5008 – as it already has on the 3008. Besides, these days MPVs are about as popular as a family of ferrets in your tighty-whities.

Barring a few indiscernible style tweaks, the new 5008 is essentially the same car as its smaller 3008 sibling from the near-vertical grille back to the B-pillar. It rides on the PSA Group’s versatile MP2 platform as found under the 3008 and Vauxhall Grandland SUV. However, its wheelbase has been extended by 165mm to accommodate the third row of seats, with evidently lengthier rear doors for their easier access. The car’s overall body length has increased by 190mm and its height by 20mm, depending on rim size of alloys chosen.

An extended bonnet, upright grille, sharp-looking front and rear lights and a chrome arc running over the window line to the hatch are the exterior highlights, but the biggest changes are inside. 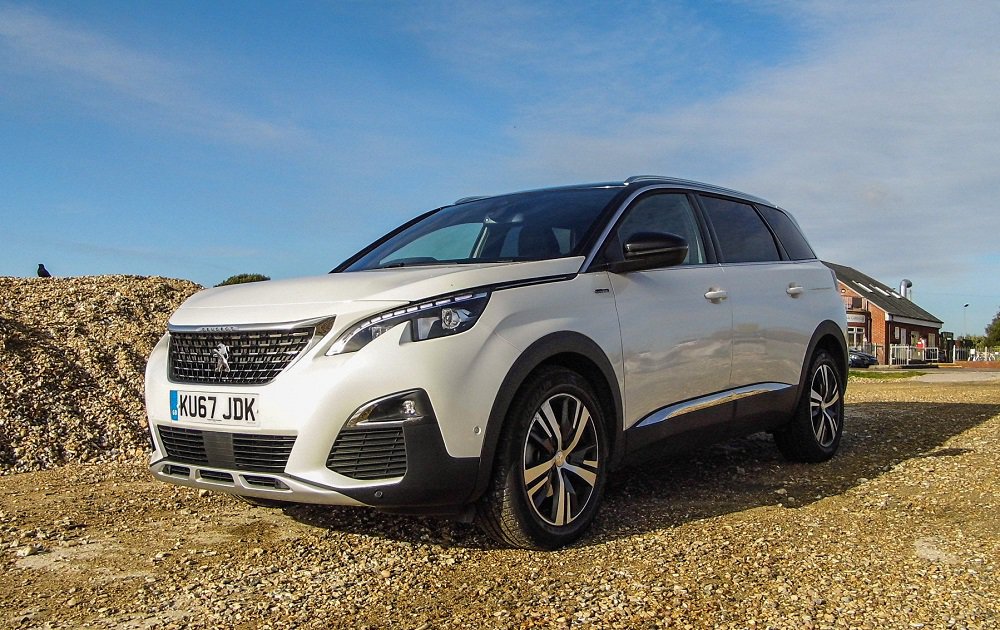 Here, the 5008 again mirrors its 3008 counterpart. The now familiar i-Cockpit design is cutting edge and high quality, soft-touch materials abound, even on the entry-level Active trim grade. That 190mm extra length over the 3008 offers a level of interior space rarely found in most three-row SUVs.

The diminutive flat-bottomed (and topped) steering wheel is again present in the new 5008. It looks sporty, feels nice in hand especially when finished in the perforated leather with contrasting stitching as found on the top-spec GT variant. However, it’s rather a Marmite thing, with some scribes saying it works well on Peugeot’s smaller and warmer hatches, but not on an SUV of this size. As you might expect, I rather like it. 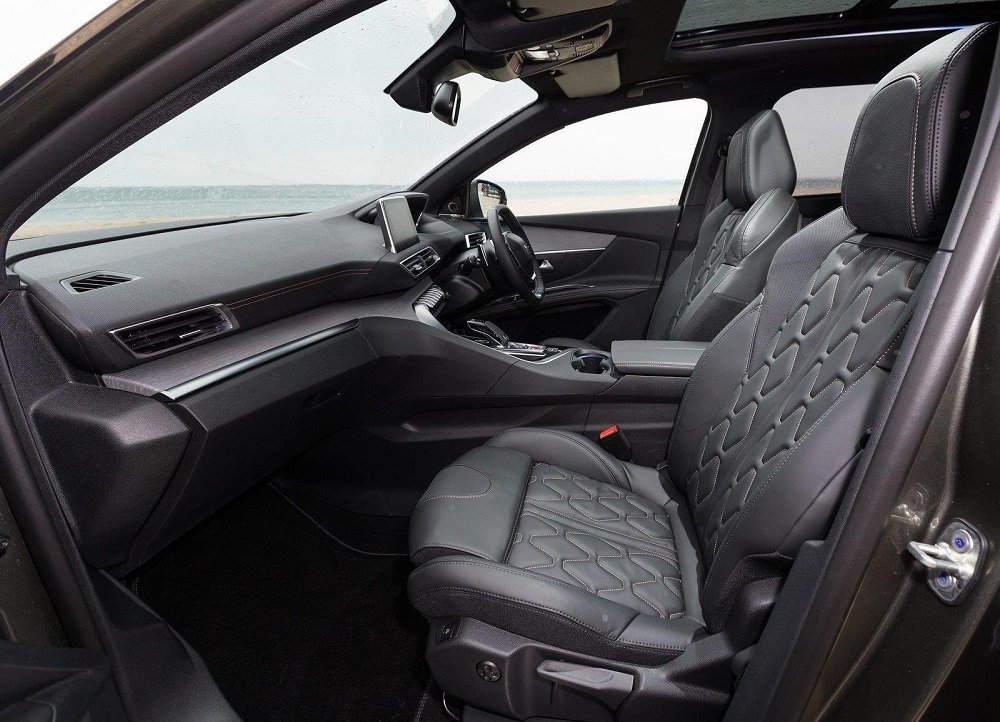 Within the 5008’s i-Cockpit layout is Peugeot’s 12.3-inch configurable driver instrument display and eight-inch infotainment and media touchscreen. The whole package is classy and fresh looking with a pleasant blend of materials.

Practicality is the keyword with this new 5008. Boot space is a remarkable 780 litres with two rows of seats in place. Collapse the second row and 1,940 litres become available. Coupled with a front passenger seat that also folds flat, the 5008 can carry objects in excess of three metres in length (well, there’s your IKEA trips covered!). 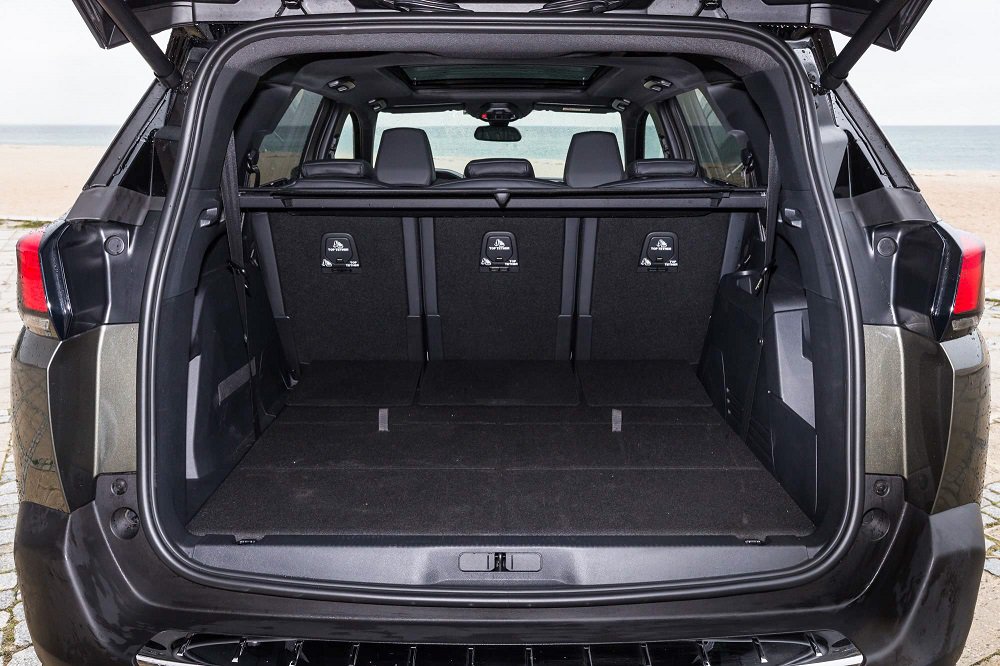 The second row of three individual seats slide fore, aft and of course recline too, making it easy for passengers to find an independent and comfortable seating position. They are all the same width so there’s no arguing who gets the outer two seats. All three have ISOFIX points.

Uniquely for its class, the 5008 offers a three-row, 5+2 seating configuration as standard. However, like most three-row SUVs, the rearmost seats really are for little people, sulky teens or dainty ballerinas and then only for short trips. Using the third row really compromises those in the second-row, thanks to having to slide seats forward in order to provide any leg room for third-row occupants.

For extended periods of non-use, both third-row seats can easily be removed from the car and stored in a garage – each weighing only 11kg, they free up an additional 80 litres of boot space. There are five trim grades in the Peugeot 5008 model line-up, most of which will be familiar: Active, Allure, GT-Line and the top-spec GT. Announced only last week is a new GT-Line Premium model, which slots in between the GT-Line and GT. At the top of the 5008 range is the exceptionally equipped GT which adds aggressive wheel arch extensions, adaptive cruise control with stop function, driver and front passenger seat adjustable cushion nose and full leather furniture throughout. 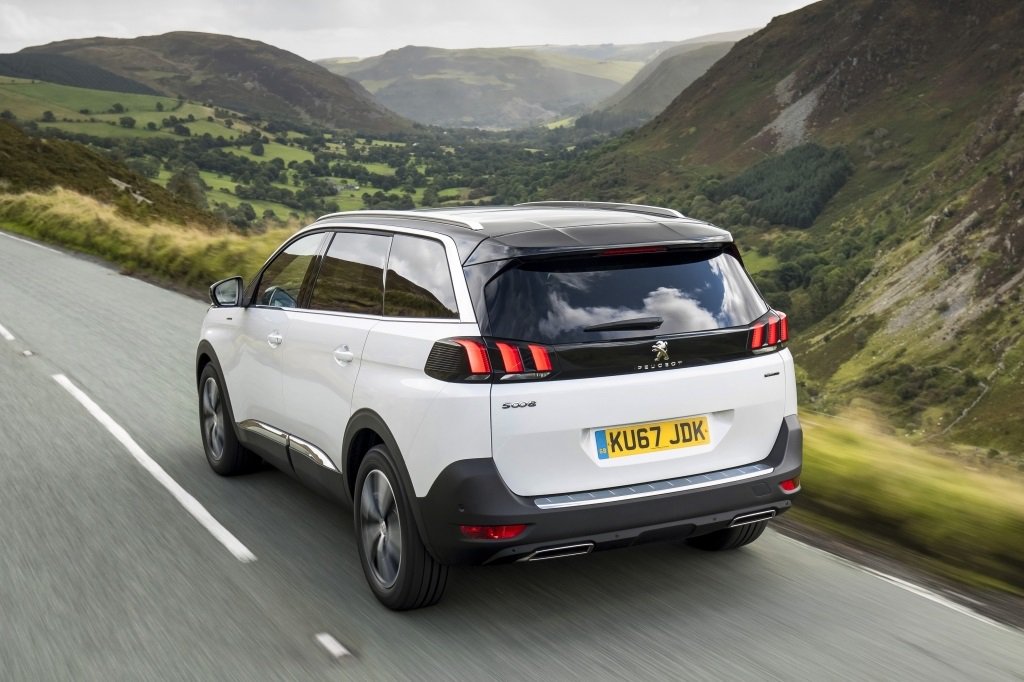 At launch, there are two petrol and two diesel engines offered in the line-up, each available in variable states of tune.

The first, a little 131hp three-cylinder 1.2-litre turbocharged petrol engine is a remarkable thing. It’s carried over from the 3008 where I found it a more than adequate match for the smaller SUV. Impressively, it’s made its way into the larger 5008, in which it performs smoothly and quietly yet, with its 170Nm of torque, pulls with remarkable gusto for such a small unit. However, load up the 5008 with five people and a boot full of luggage and the little engine could perhaps tell a different story.

The other petrol engine is PSA’s tried and very tested 1.6-litre THP four-cylinder unit delivering 165hp, which is only available when paired to a 6-speed automatic in Allure, GT-Line and GT-Line Premium trims. 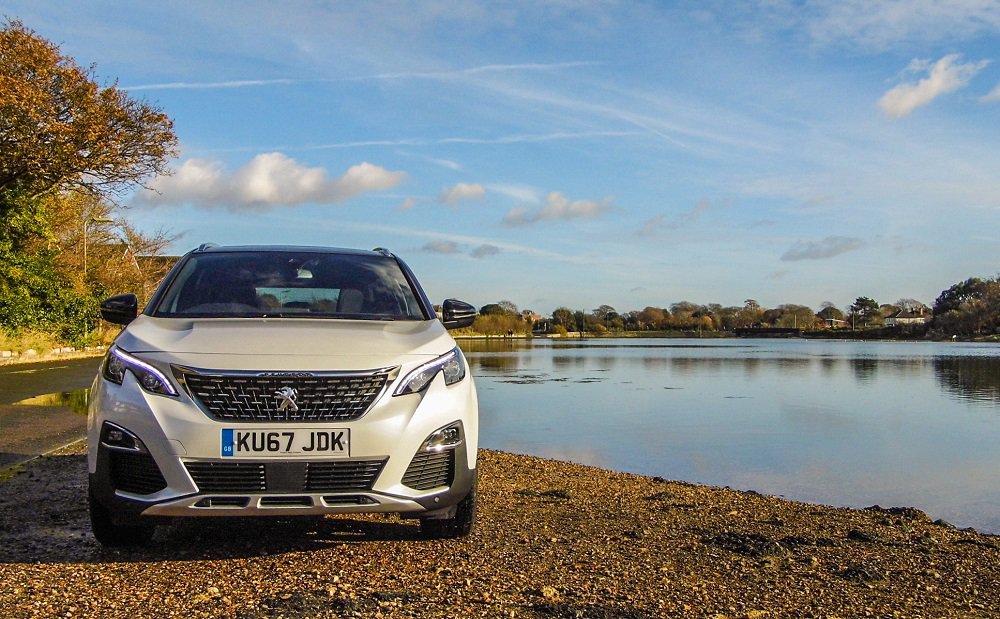 The more efficient and sippy diesel line-up starts with a turbocharged 1.6-litre BlueHDi unit, available in power outputs of 100hp or 120hp and may be paired with a 6-speed manual or the EAT6 automatic.

A larger capacity 2.0-litre diesel is available in the lesser 150hp and paired only with the 6-speed manual gearbox, while the slightly more powerful 180hp is available with either a 6- or 8-speed automatic (no manual option). Both 2.0-litre engines are available in GT-Line, GT-Line Premium and GT trims. 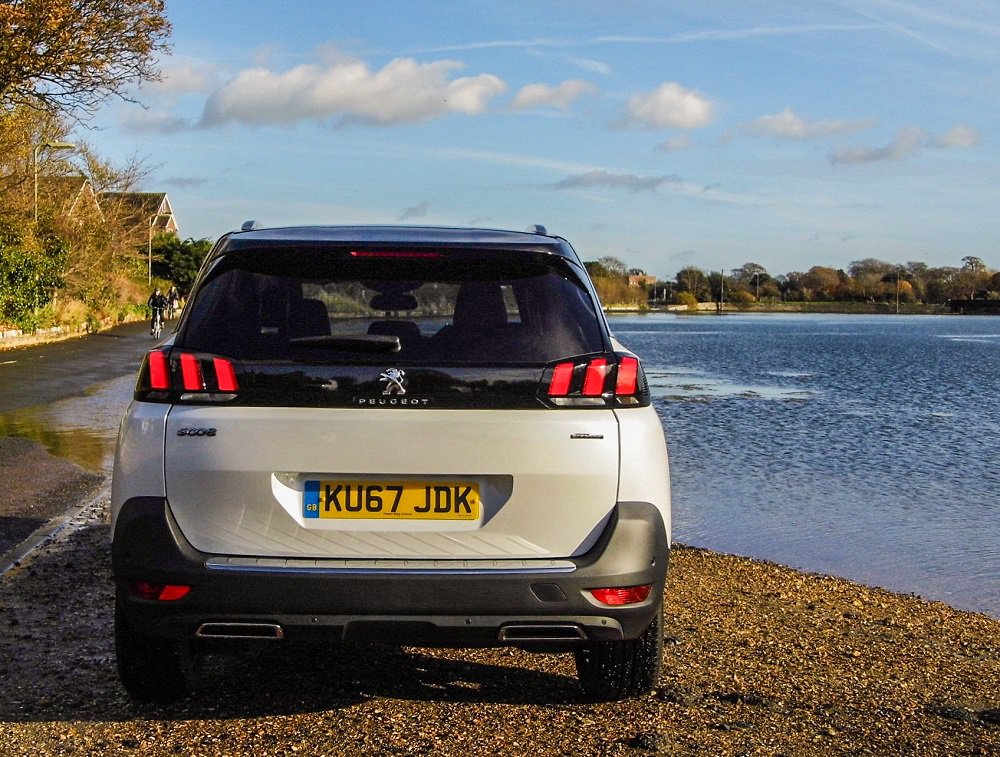 During the test week, a total of 571 miles were covered over a mix of motorway, main roads and country back lanes and brief sections of shallow muddy lane. The big 5008 offered an impressive, compliant and comfortable ride and handled the various surfaces with savoir faire, remaining totally unruffled by bumps, lumps and imperfections.

On the black stuff, the SUV remained nicely balanced, with minimal body roll through corners and with no propensity to over- or understeer. The extra length over the 3008 affords the bigger Pug a significantly more composed and mature ride quality.

Overall, it’s an engaging drive, offering nicely weighted steering with enough feedback to inform you of what’s going on underneath you and both road and wind noise are kept well in check. Not a lot here, to be honest. The lack of conventional four-wheel drive across the range might send buyers seeking extra traction into the arms of rivals. But, the 5008 isn’t completely hopeless off the beaten track though, because you can opt for Peugeot’s own Advanced Grip Control which, with a twist of the drive mode selector on the centre console, grip is adaptive to handle difficult conditions which include mud, sand and snow – and it works a treat during less-severe challenges while getting off the beaten track. Peugeot has a lot riding on the 5008 as the French brand takes the fight to its SUV rivals armed with sharp pricing and arguably one of the nicest interiors in the segment, not to mention excellent levels of equipment and a superbly engineered chassis that delivers a quality of ride unsurpassed by rivals I’ve driven over the past few months.

As Peugeot’s first foray in the medium-to-large SUV segment, the all-new 5008 is a triumph of Gallic style and substance, offering levels of luxury, design and comfort often found in more expensive brands. Bon travail, Monsieur!