Mitsubishi reached its car-manufacturing centenary last year, the same year in which it became the third member of the Renault-Nissan-Mitsubishi alliance. The alliance is a Franco-Japanese strategic partnership which – as each is quick to point out – is neither a merger nor a series of acquisitions.

The three companies are joined together through a cross-sharing, economies-of-scale agreement which will see Mitsubishi provide plug-in-hybrid and proven 4x4 technologies to Nissan-Renault which is expected to provide platforms to shape Mitsubishi’s expansive future product portfolio.

The Eclipse Cross crossover has been in development by Mitsubishi for some time and none of its parts are a product of the alliance – including the engines and transmissions. As a result, it is likely that the Eclipse Cross will be the last ever all-Mitsubishi Mitsubishi.

The Eclipse Cross is the first production car from the drawing board of Mitsubishi’s designer-in-chief Tsunehiro Kunimoto (ironically head-hunted from Nissan/Infiniti three years ago) and rides on a re-engineered Outlander chassis.

Introduced at the Geneva Motor Show last year and built for all world markets at the Mizushima facility just outside Okayama, Japan, the Mitsubishi Eclipse Cross slots in between the smaller ASX and larger Outlander in the current UK line-up. However, the next iteration of the ASX will be smaller and that of the Outlander is expected to be larger, which will better accommodate the dimensions of the Eclipse Cross in the middle of the line-up. 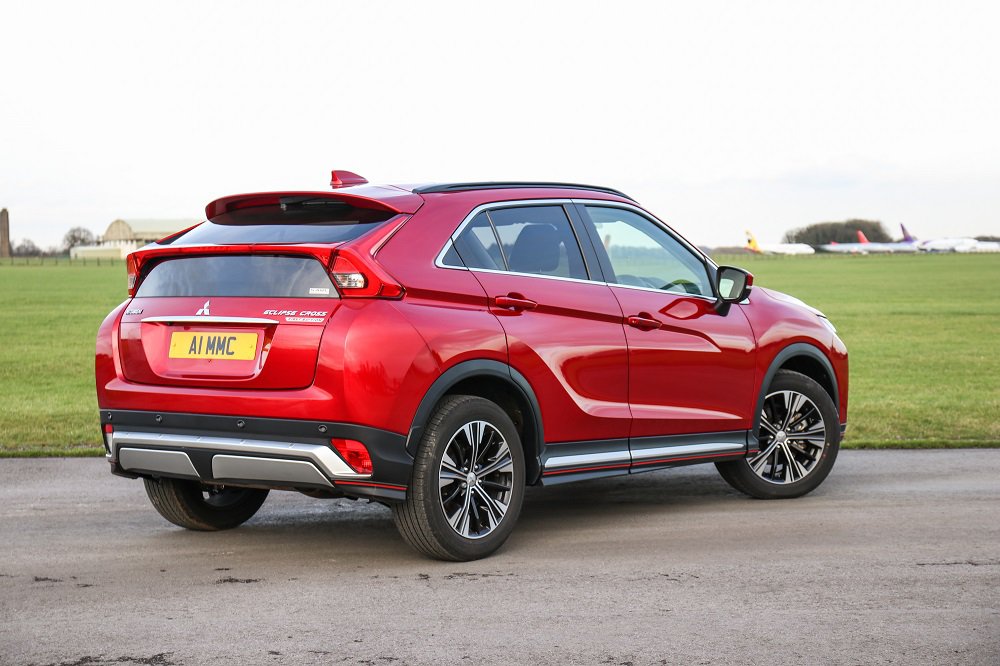 The eye-catching Mitsubishi Eclipse Cross is more adventurously styled than most of its rivals. A car of two lateral halves, it blends rugged, 4x4 lower body styling with a more coupé-like upper body. There’s a splash of chrome detailing on a rather bold front along with LED daytime running lights.

At the rear, the Mitsubishi has a short overhang and a hatch that features the rear windscreen split by a full-width light bar. Visually, there’s a lot going on and the sharp, angular lines are so severe as to perhaps divide opinion. However, the Eclipse Cross undoubtedly looks unique and refreshingly different in a torrent of crossover mediocrity. 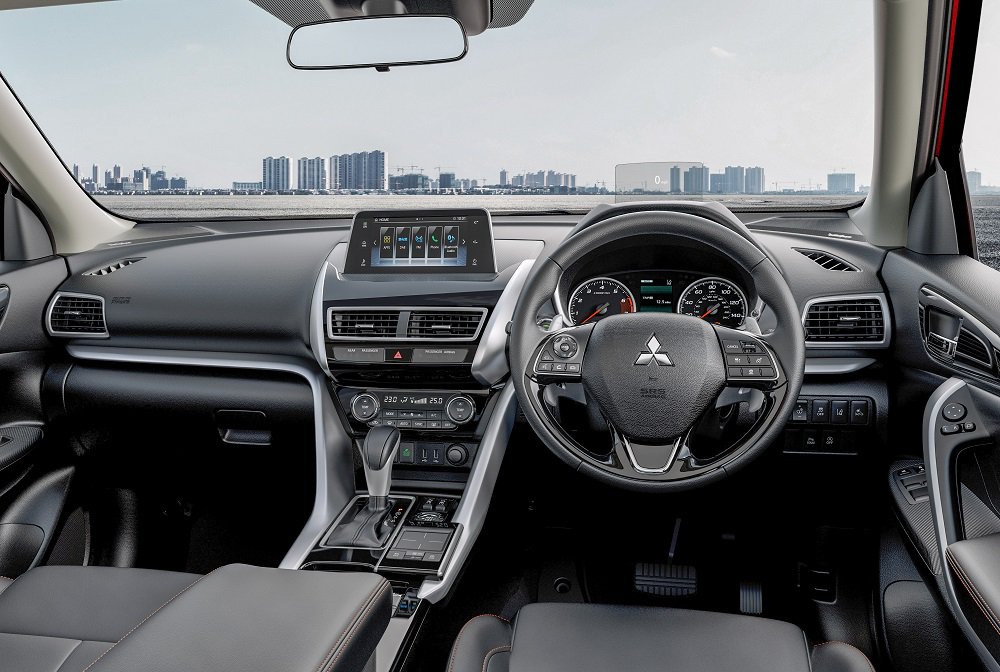 The striking exterior continues to a more sober degree to the refreshingly appealing interior. Much attention has been given to the quality of materials which is several rungs above the Outlander and a full-length fireman’s ladder over the ASX. Soft touch plastics cover the critical touch zones of the cabin, while more durable and utilitarian plastics are deployed lower down. The soft-touch switchgear feels high quality but the more frequently used buttons are relegated to the lower, darker part of the dashboard, requiring drivers to avert their eyes from the road, until such time as they get used to it.

The exterior styling is great news for individuality and driveway appeal, but its curvaceous shape does have something of an impact on overall practicality. Front and rear passengers have leg and elbow room to spare, but luggage will be feeling a little cosy in the boot. Rear passengers gifted with height in excess of 5ft 10 inches will find their hair rubbing against the headliner thanks largely to the sloping roofline.

The Eclipse Cross is a five-seater only and the rear seats can slide 20cm back and forth to alternate as desired between extra rear legroom or more boot space – which ranges from 341 to 448 litres. By comparison, the Peugeot 3008 has a permanent 520 litres. However, both front and rear furniture is noticeably more comfortable than either the ASX or Outlander.

A decent driving position is easily and quickly found, from which forward visibility is good and there are plenty of handy storage spaces around the cabin for one’s daily detritus. The split rear windscreen means there’s a solid line straight through your main rear view mirror that could distract, but the side mirrors are rather prominent, which helps when changing lanes on the motorway. 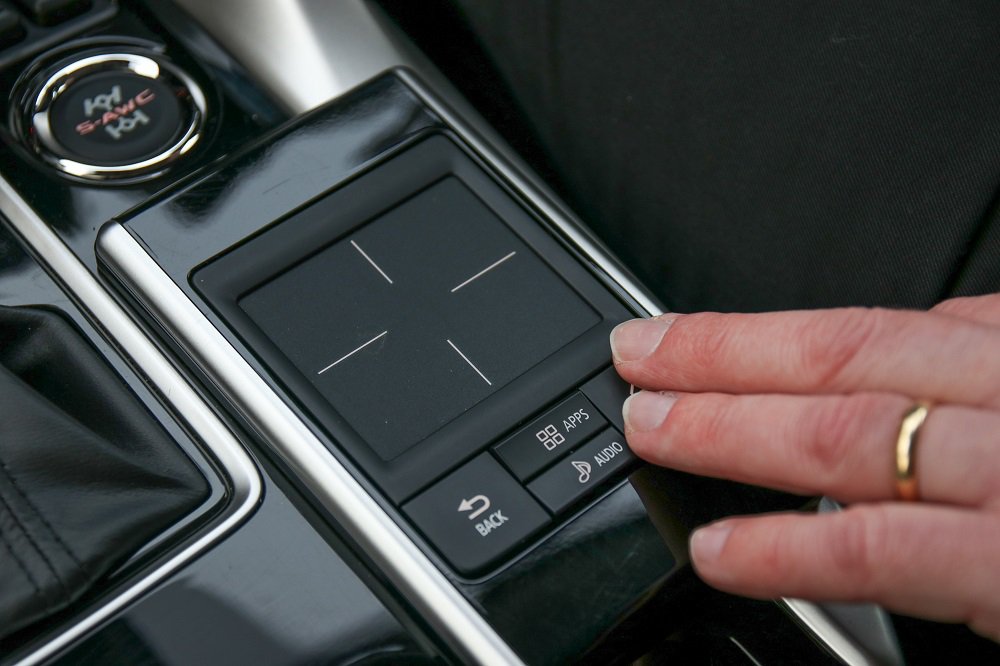 The Eclipse Cross range comprises of three primary trim grades - ‘2’, ‘3’ and ‘4’, plus a ‘First Edition’ launch model, which will be limited to 299 cars. 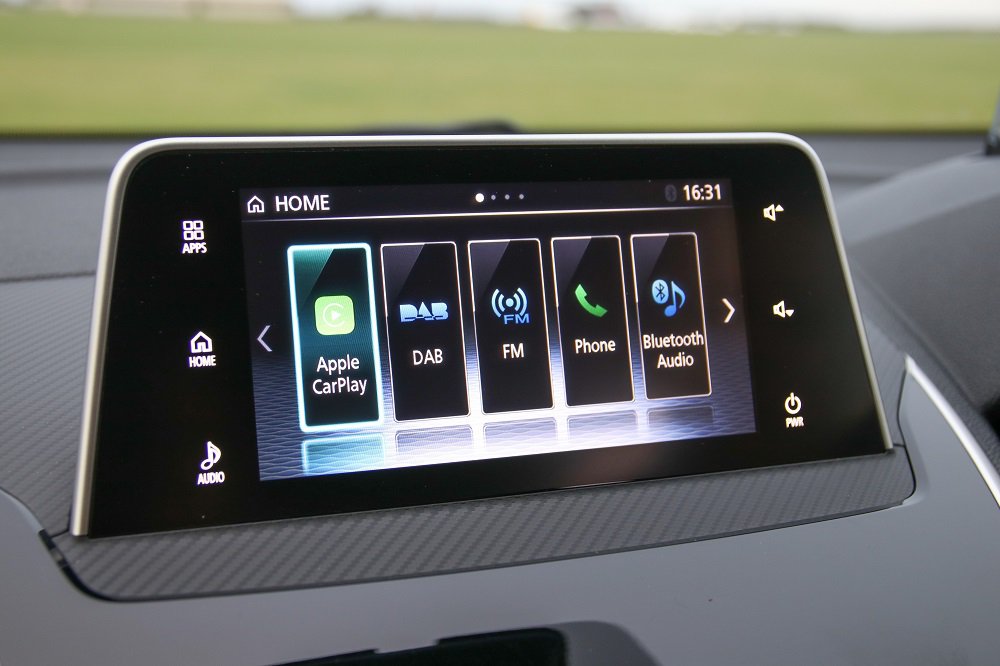 Standard on the Eclipse Cross is the seven-inch touchscreen display which sits BMW-style atop the dash. It looks smart and is adequately responsive to the touch. There’s a trackpad controller on the centre console, but I found it rather fiddly during the time I spent with the car so used the display itself to select the functions I needed. Heating and air-con controls are actual buttons, unlike in the Peugeot 3008 – an important safety feature.

There is no satellite navigation on any trim grade of the Eclipse Cross. It does however support Apple CarPlay and Android Auto, which some buyers will prefer over a conventional in-car sat-nav. However, if you don’t have a compatible phone then you’ll be stuck without navigation, plus you’ll have to fork out for data charges to your phone carrier when you need to go somewhere unfamiliar. From its launch, there’s just the one all-new 1.5-litre petrol engine on the Eclipse Cross, while the development of a 2.2-litre diesel engine is nearing completion and is expected to join the UK line-up later this year. Both engines are wholly designed and engineered by Mitsubishi and were in the pipeline before the alliance was concluded.

The four-pot, 1.5-litre, turbocharged petrol engine is available with six-speed manual or an eight-step CVT via a pair of flappy paddles. It has an output of 163hp and garners 250Nm of torque and shows willing and sounds entertaining when pressing on.

The impending 2.2-litre diesel will be paired only with a conventional torque-converter automatic gearbox (not the CVT) and all-wheel drive will be available as standard with the oil-burner. No technical details for the diesel are available at this time. A hybrid model is also expected to arrive sometime in the near future.

Manual petrol cars are front-wheel drive only but optional all-wheel drive is available and includes a home-grown system called ‘Super-All Wheel Control’ (S-AWC), which controls torque delivery to each wheel, sending power where it’s needed most. Three selectable driving modes (auto, snow and gravel) change how it responds according to prevailing surface conditions. 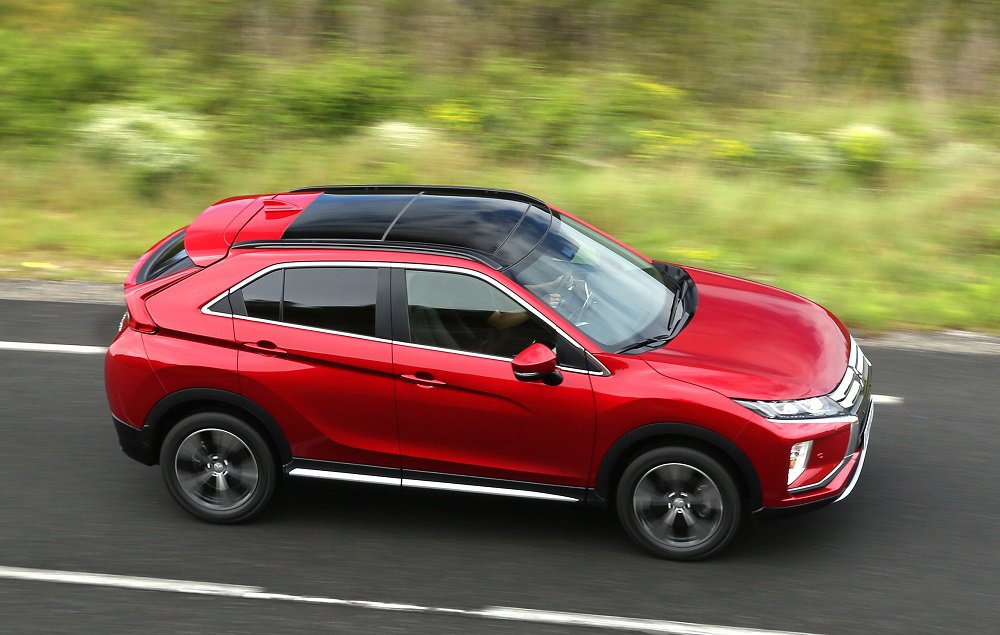 On the road, the Eclipse Cross felt light and exhibited good handling through the bends with little discernable body lean to speak of, although crusty surfaces did tend to make the rear end fidget, but not alarmingly so like some in this class.

The 1.5-litre petrol linked to the manual gearbox delivers a good turn of speed and the quick and direct steering means it’s quite good to drive on a sweeping road. There’s not much feedback through the wheel, but that’s common to crossovers in this class. The Mitsubishi is not as good to drive as the Peugeot 3008 or the Ford Kuga, but it’s not far off the mark by any means. 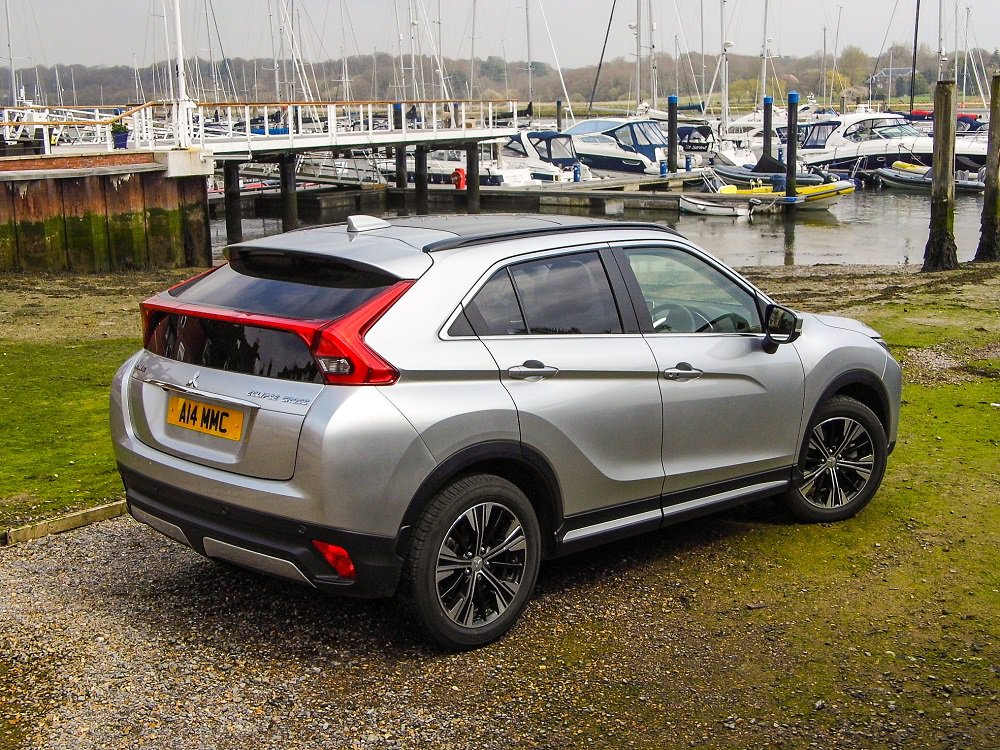 The electronic eight-step constant-velocity transmission (CVT) ‘gearbox’ paired to the petrol engine takes a sizeable bite from the pleasurable driving experience enjoyed by the manual ‘box. Mitsubishi were at pains to point out how much development has been put into the new CVT transmission and sure, it does feel better than most CVT’s I’ve experienced in recent years, but it still takes a partially deaf set of ears and a good dollop of patience to become remotely content with it.

If you only ever drive in the city, the CVT will be an adequate match for that environment. However, should the need to overtake arise on an open road, the revs soar noisily when you put your foot down as the gearbox resists the need for a higher ratio. It’s a characteristic common to CV transmissions and, while manufacturers proffer questionable claims of efficiency, they just aren’t enjoyable to drive.

Fuel consumption is unexceptional with the petrol engine returning an official 42.8mpg in front-wheel drive manual guise, reducing to 40.4 from the all-wheel drive CVT. CO2 emissions are also disappointing and range from 151 to 159g/km. While the new engine performs to impress, those numbers are mediocre at best, given that it has been developed for world markets that demand internal combustion engines be cleaner and more efficient than ever before.

When the all-new 2.2-litre diesel becomes available it should address those shortcomings via greater economy and much lower emissions – which will appeal to fleet managers – while the front-wheel-drive only model should also be cheaper to run. 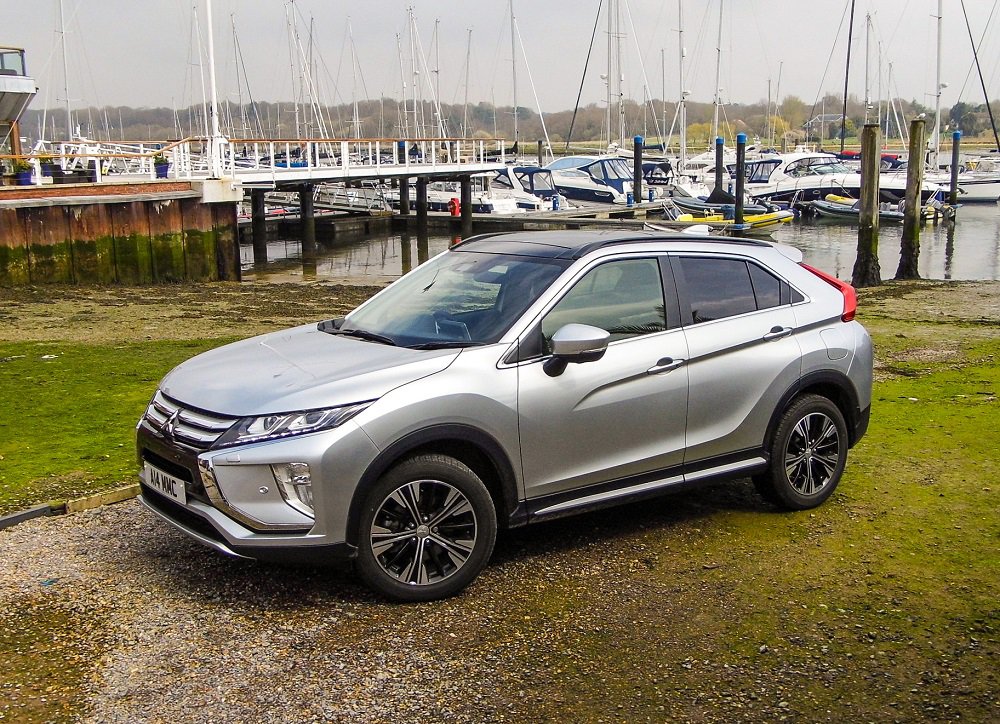 Euro NCAP awarded the Eclipse Cross a full five-star safety rating when tested in November 2017. It scored 97% for adult occupants, 78% for child safety, 80% for pedestrian safety and 71% for safety-assist equipment fitted as standard. While not top of the class, they are nonetheless respectable figures.

Available safety tech includes adaptive cruise control, auto city braking, lane departure warning, blind spot warning, rear cross traffic alert and auto high beams. A set of cameras allows a bird’s-eye view of the car when you’re parking using the seven-inch screen on the dash, which is a huge help in tight spots. The adaptive cruise control can go right down to a standstill, which holds the car when you’re in traffic until you press the accelerator pedal and it moves up to match the speed of the car in front automatically. Uniquely different styling aside, the most notable aspects of the Eclipse Cross are its interior quality and comfortable ride. With a touch of alliance irony, it feels almost French in terms of ride quality and overall, is a broadly significant step in the right direction for the Japanese car maker. It’s only the petrol engine that disappoints.

Its all-wheel drive capability and on-road dynamics will undoubtedly disenchant off-road enthusiasts, but they are not the target audience. British families looking for a civilised, safe, comfortable and spacious compact crossover with alternative appeal, have yet another contender to consider in the all-new Eclipse Cross.

The Mitsubishi Outlander Petrol has been updated for 2020, bringing...

Continuing our month of electric and hybrid vehicle reviews we road...