Mercedes-Benz X-Class Review: Finally, a Benz with a bed

Taking a market rival’s already successful product as a donor car to gain entry into a new sector is nothing new. Fiat did it two years ago with the Fullback which was based on the award-winning Mitsubishi L200. 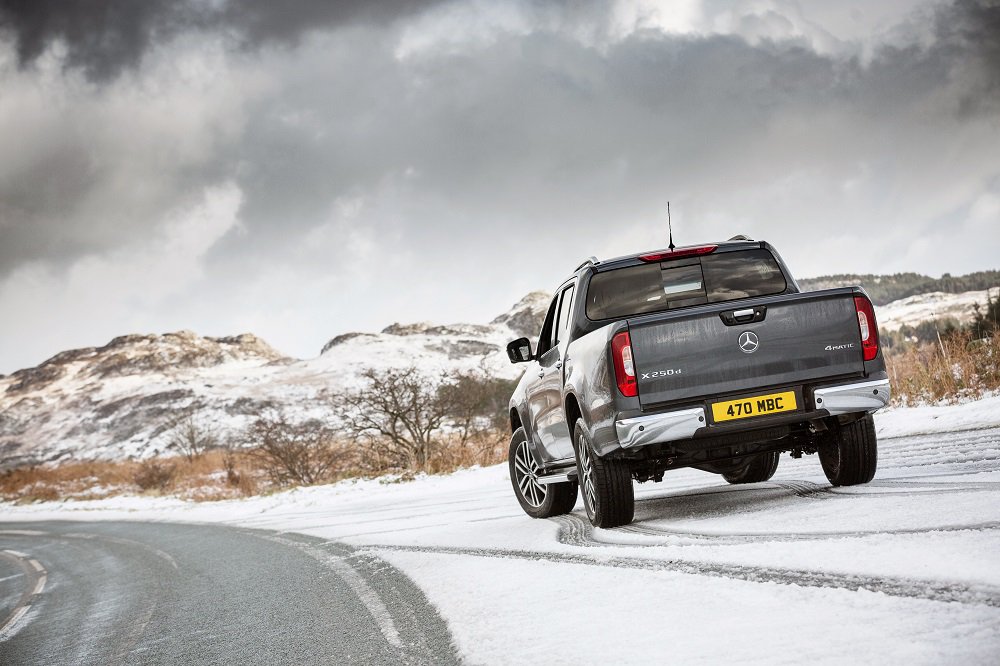 Why only now? It’s all down to impressive sector sales numbers. Top-end one-tonne pick-ups have undergone a global sales surge during the past decade or so and last year in the UK, almost 57,000 units were sold – up 16 per cent over 2016. At the moment, the Ford Ranger is the local market leader, but the classy Volkswagen Amarok is the real rival to the X-Class at the upper end of the UK market. 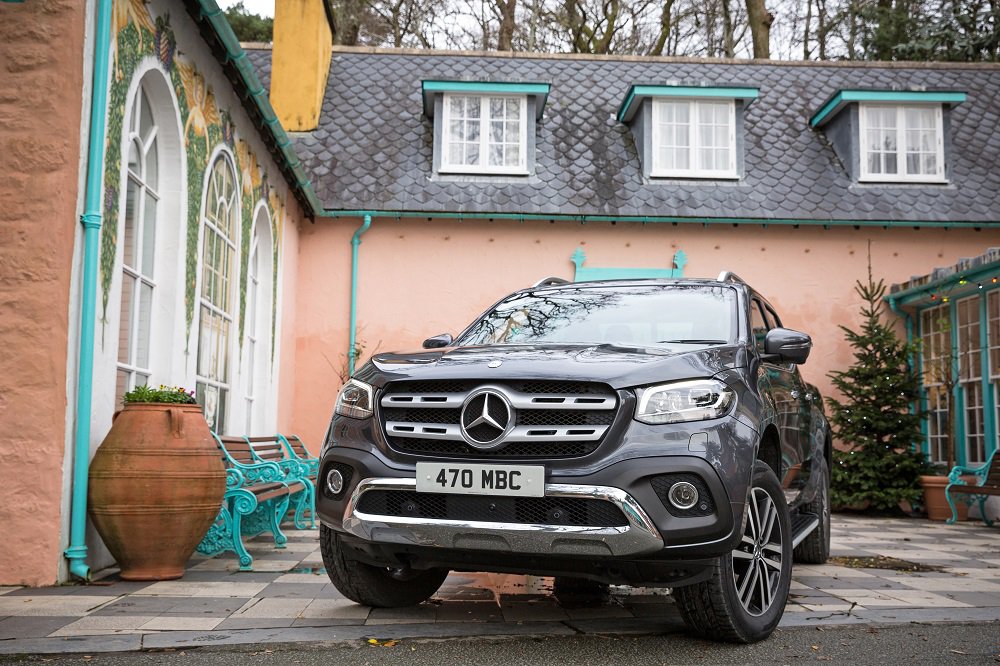 Furthermore, because pick-ups are classed as light commercial vehicles, they don't attract the same rate of tax as a normal car if used as a company vehicle. And because more and more are now available with better interiors and premium badges, the number of private buyers is steadily rising.

Jointly developed in conjunction with the Renault-Nissan Alliance which has been in existance for the past 18 years and recently joined by Mitsubishi, the X-Class is based on the Nissan Navara which has a reputation for toughness and reliability. The latest Navara replaced the traditional leaf springs for the rear axle with coil springs – sensible engineering that was key to enabling the kind of handling and ride comfort that Mercedes-Benz was after for the X-Class. 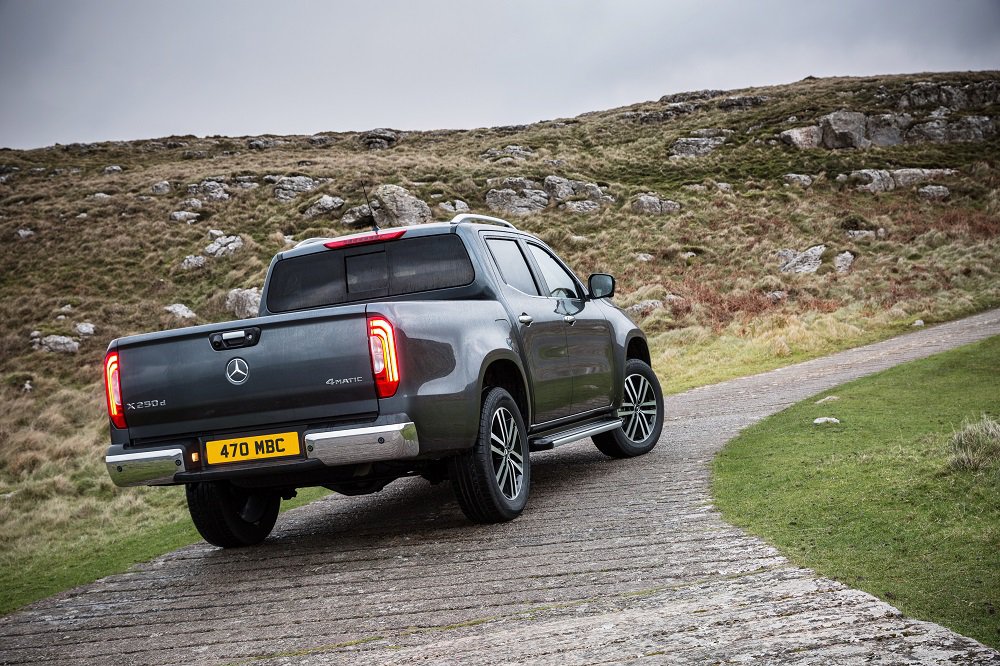 The X-Class is only offered as a double cab as Mercedes-Benz is openly pitching its new pick-up to SUV buyers and professionals who want a working vehicle that will double up as classy, family transport at the weekends.

The finished X-Class shares its ladder frame and a number of nonvisible parts with the Nissan, but hunting for obvious similarities when side-by-side is frustrating as the X-Class is a very different vehicle. 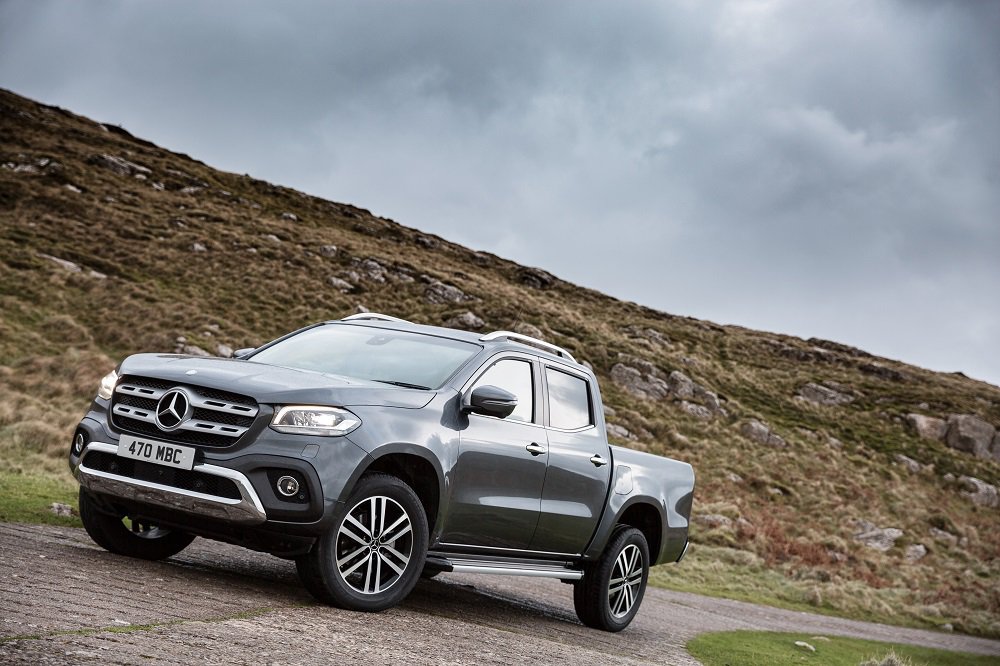 Underneath, the running gear of the X-Class is largely the same as the Navara, but Mercedes has tried to distinguish the X-Class with its own look – and has largely succeeded. Almost the entire exterior is different with sleek, unfussy surfacing and offers an imposing presence on the road. The front of the X-Class is dominated by the large three-pointed star and an overall design not too dissimilar to Merc’s SUV models.

It looks more substantial than the Nissan because Mercedes has widened the track and the bodywork by almost three inches. The two vehicles are built on the same assembly lines at Nissan’s plant near Barcelona, but no exterior sheetmetal or glass is interchangeable. The door geometry – the hinges, latches, and their locations – is the same, but the panels are all brand specific. 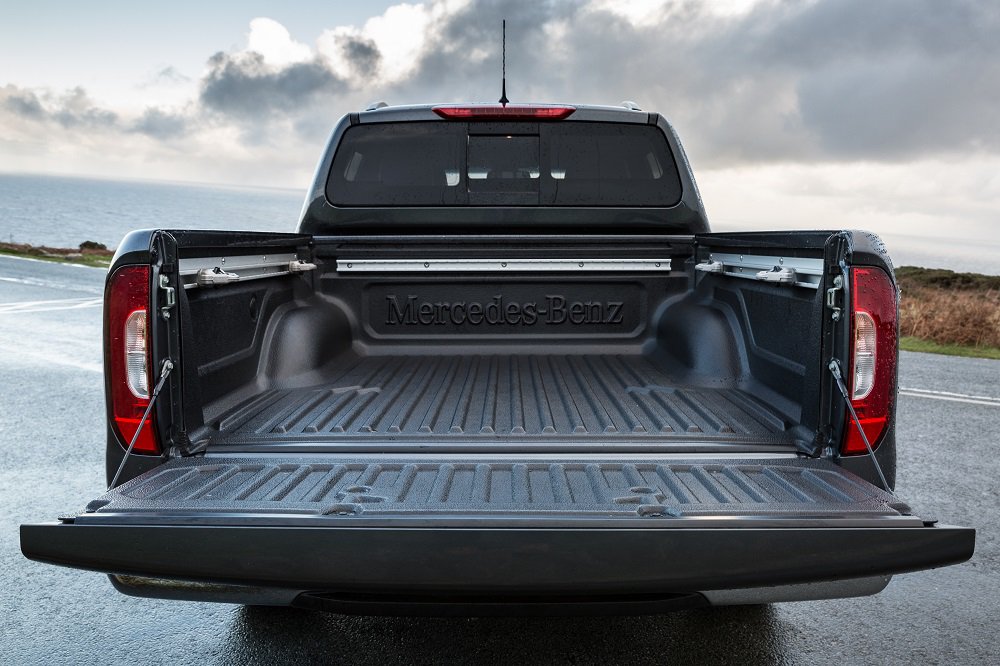 The cabin is above average in quality – for a pick-up – and it should always be remembered that the X-Class is effectively a working vehicle. It’ll carry over a tonne and tow up to 3.5 of them. This means hard wearing plastics are common, but there are also plenty of premium touches, with leather seats, optional wood trims and stitched dashboard covers.

The interior is dominated by a concave upper dashboard; the instruments, central screen, HVAC controls, and the optional touch-sensitive COMAND infotainment system come straight from the Mercedes-Benz passenger-car parts bin. However, the X-Class falls short of its premium aspirations when carryover parts from Nissan are used. These include the dome light, the switches for the seat heaters and the automatic gear selector that sprouts from the console. 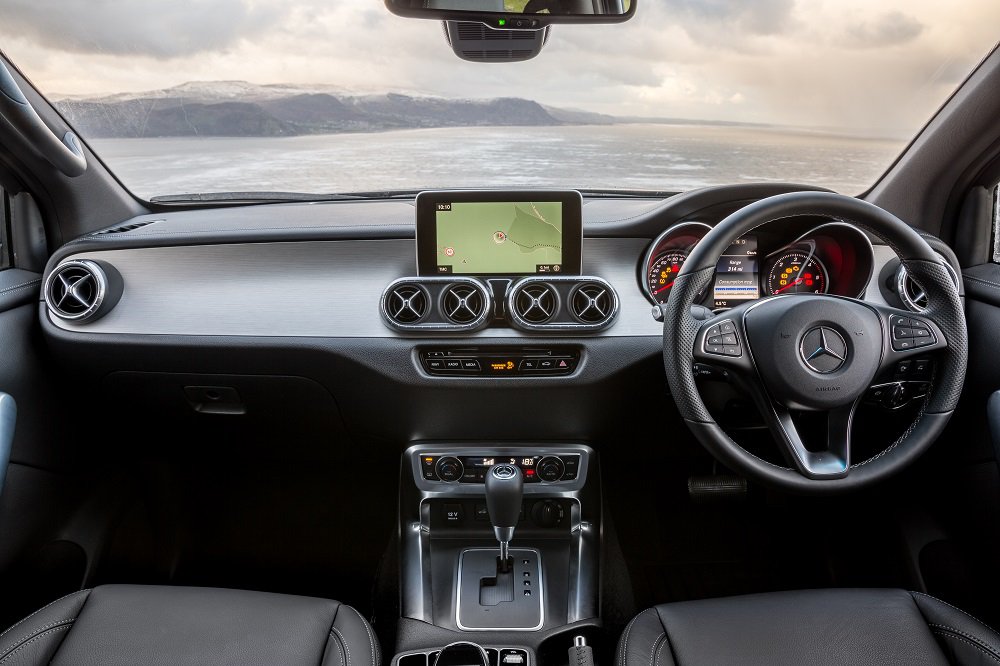 As you’d expect, build quality in the cabin appears to be first rate, but oddly, the steering wheel only adjusts for rake and not reach, but otherwise the ergonomics are also perfectly acceptable.

The X-Class also needs far more storage space in the cabin for a workman’s daily detritus. Only the door pockets could be described as large, but elsewhere the center console bin, cup holders and the glovebox are all tiny. 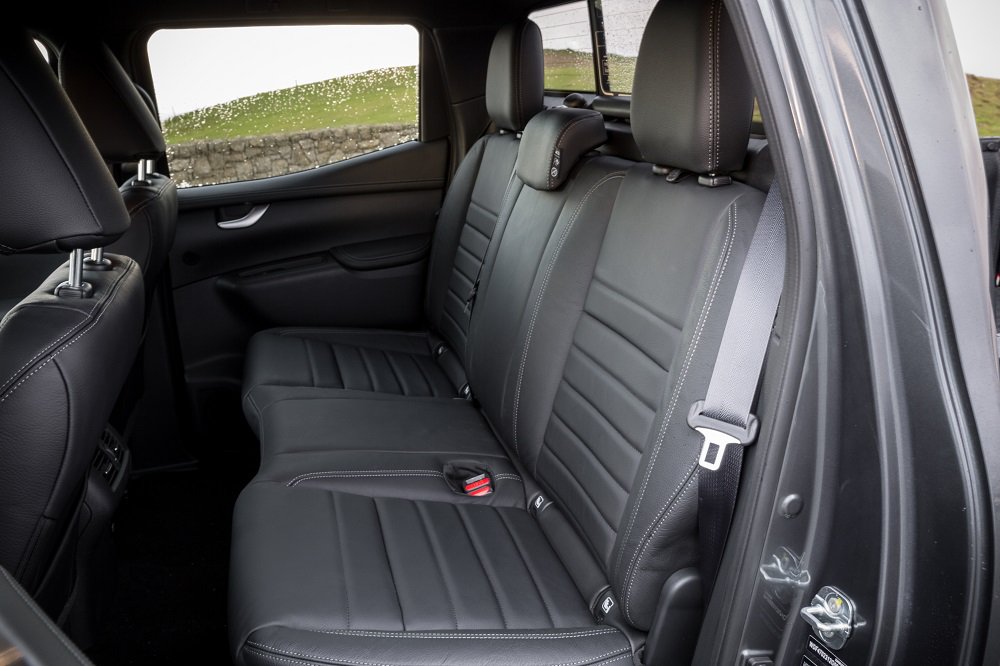 The range-starter Pure is evidently entry-level with a rather more basic interior and 17-inch steel wheels, unpainted bumpers and a rubber floor, but is still a bit more posh than any other ‘working’ pick-up. It is aimed primary at commercial buyers, but it does still get essentials like Bluetooth, air-conditioning, a reversing camera, electrically adjustable wing mirrors and front fog lights. All models have useful LED lights mounted beneath the third brake light, helping you see what you’re loading and unloading at night and operated by a switch on the dashboard. 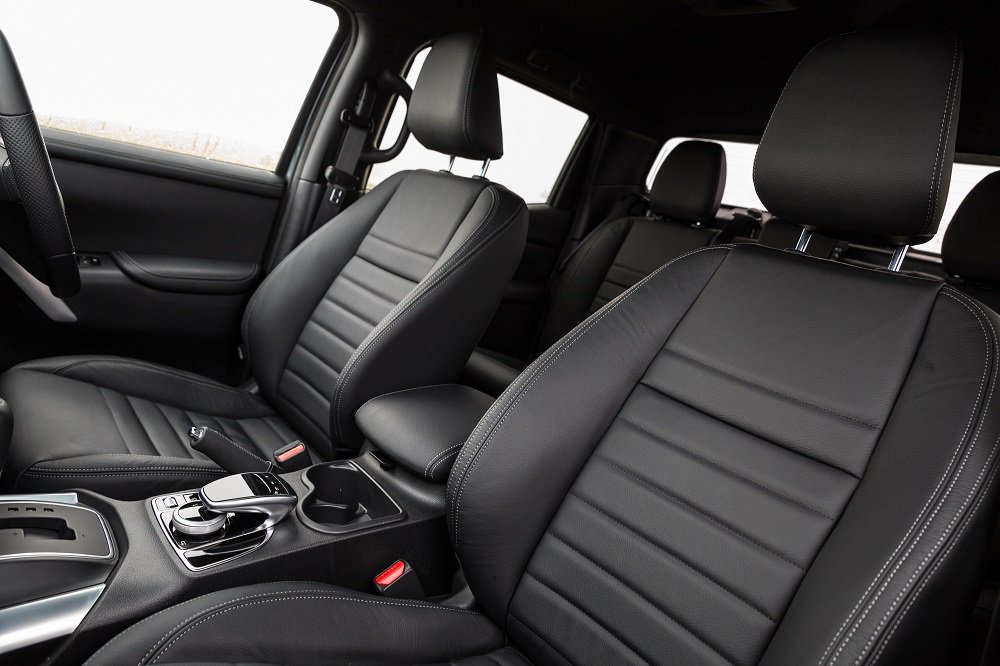 The mid-spec Progressive trim is more desirable, with alloy wheels, body-coloured bumpers, automatic wipers, a leather steering wheel and an eight-speaker stereo. It’s more useful too, thanks to rails along the load bed to tether cargo. 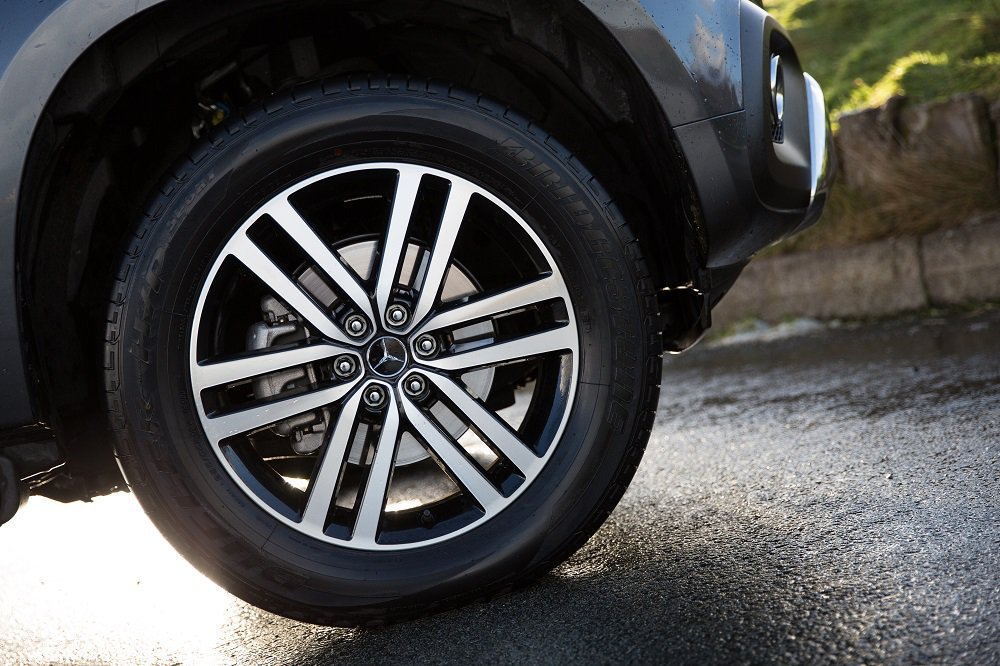 At launch, the Mercedes X-Class shares its muscular four-cylinder, 2.3-litre diesel engine with the Navara and Renault Alaskan, but unlike those two cars, the X-Class will eventually be available with a V6 diesel this summer. This will push the X-Class further upmarket, giving it a performance advantage against the 3.0-litre V6 Volkswagen Amarok.

The entry-level X200d makes do with a single turbocharger, but the 161bhp it produces should be more than adequate for many drivers. It’s also only available with a six-speed manual gearbox. Upgrading to the X250d adds a second turbo, a seven-speed automatic gearbox and sees power increase to 187bhp. 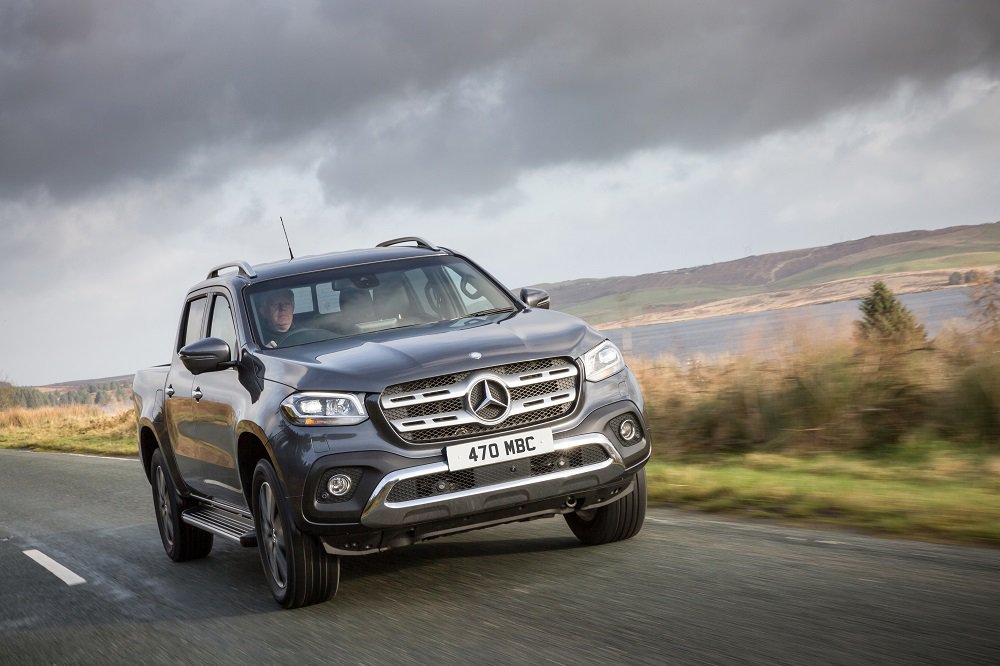 Both models come with selectable four-wheel drive. In normal driving, power is sent to just the rear wheels for improved economy, but both high- and low-ratio four-wheel drive can be selected by the driver for snow or gravel-topped jaunts or tough rocky excursions.

Like the Nissan, the big Mercedes can carry payloads weighing one-tonne. Towing capacity is expansive, with the X-Class capable of lugging 3.5 tonnes when hooked to a braked trailer – that’s a horsebox and three horses to you and me. If the standard 90-degree tailgate opening is not enough, the X-Class can be ordered without the rear bumper to allow the tailgate to open to 180 degrees downward. 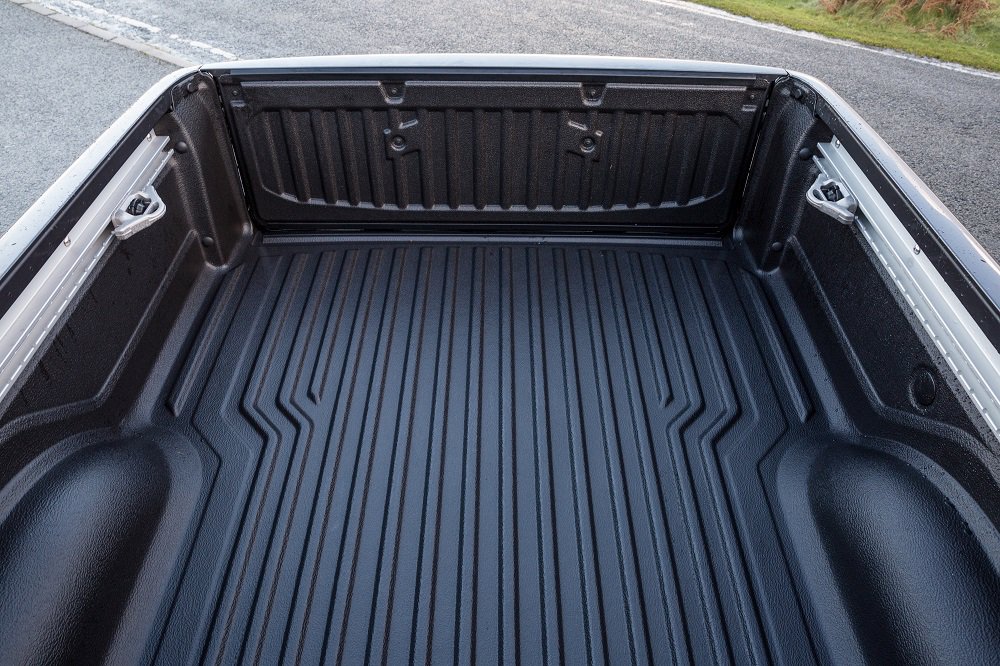 It’s a Mercedes so, as you would expect, the X-Class scored well across the four main categories of the now tougher EuroNCAP safety assessment, achieving the full five stars. Adult occupant protection was rated at 90%, while the X-Class scored 87% in the child occupant protection category. Safety equipment includes autonomous emergency braking, lane-keeping assistance, trailer stabilisation and traffic-sign recognition, along with the mandatory kit like anti-lock brakes and airbags. 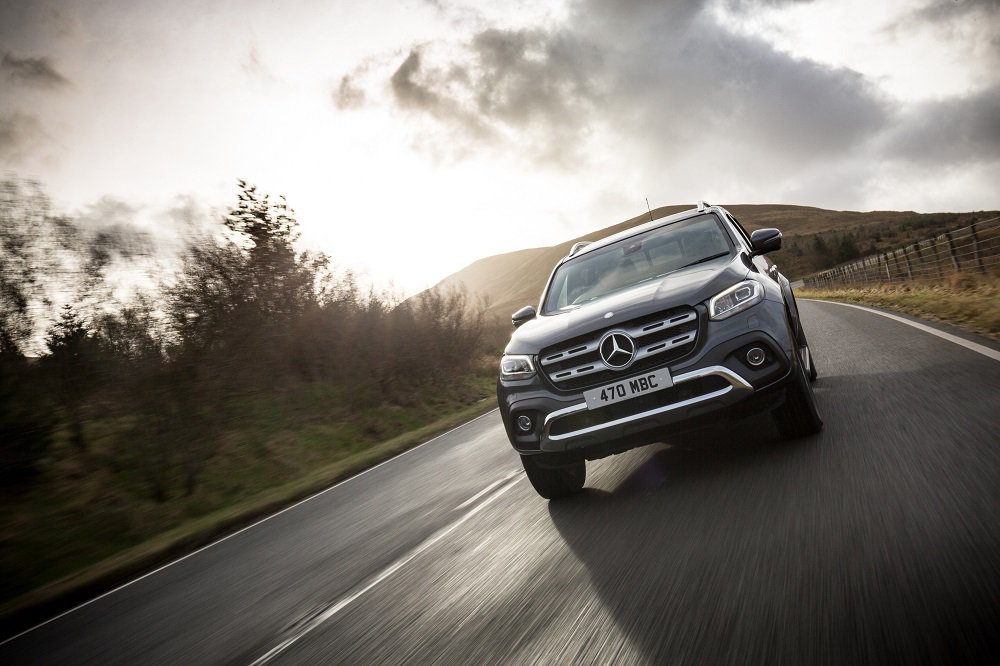 The 2.3-litre diesel feels strong and – for a pick-up – its on-road manners are surprisingly good. The X-Class demonstrates decent body control in corners, there’s plenty of grip, and, while slow, the steering is consistent and gives you confidence. It’s surprisingly quiet too as revs are just 2,000rpm at 70mph.

It’s no SUV though and while many will tell you that it rides like a car…it doesn’t. Sure, it is considerably better than many rivals but that traditional jittery pick-up ride over bumps and crusty surfaces – much like any other ladder-framed pick-up – persists.

Performance, even from the more powerful four-cylinder engine, won’t raise any eyebrows and, although the seven-speed automatic ‘box is smooth, it is sometimes slow to change down and throttle response is borderline stubborn thanks to turbo-lag. I expect the V6 engine available this summer to be a technically better pairing with the auto ’box, but we’ll have to wait and see.

Fortunately, the additional soundproofing provided by Mercedes pays dividends as little diesel rumble is felt in the cabin and wind noise at speed is well contained. 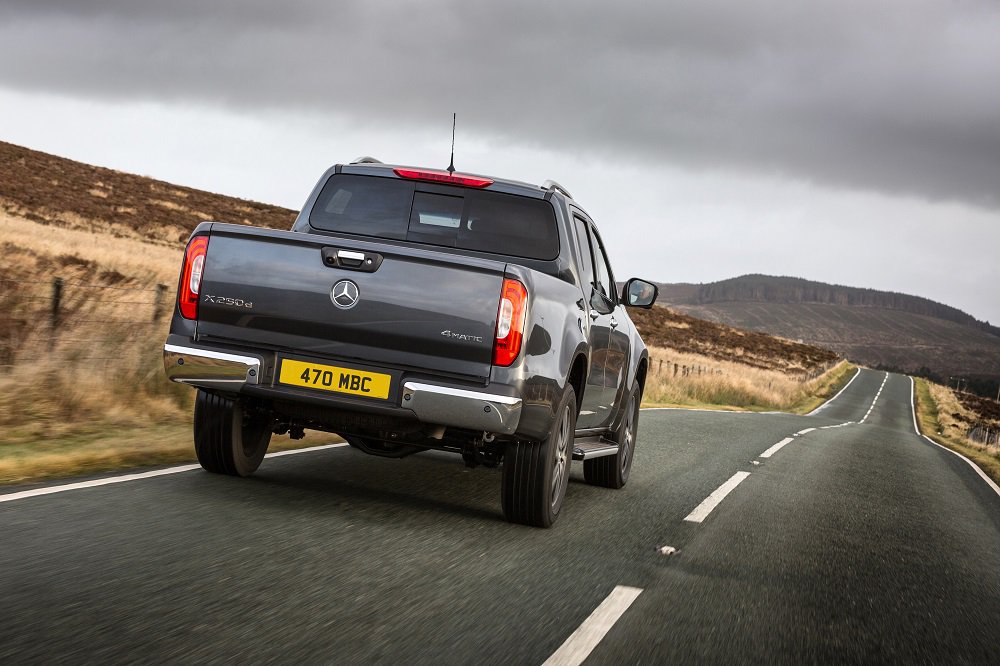 So, is the X-Class Merc enough to stand out from the crowd? Yes, it is…and more.

Given the shared technology, it would be easy to criticise the X-Class as a posh, overpriced Navara. But, to do so would be unfair, unjust and simply not true. Frankly, Mercedes has the best UK market pick-up on its hands in the X-Class. It’s good to drive, refined and stylish and its only genuine Achilles’ heel is the model’s pricing structure – even in range-entry ‘Pure’ trim.

However, the new star of the premium UK pick-up market shines brighter when the company car tax and VAT savings attached to running a commercial vehicle come into the financial fray. In reality, a budget-friendly leasing arrangement is the most practical path to X-Class ownership – and you won’t be disappointed.

We wanted to put the new pick-up to the test the best way we knew how...

Is the new V6 power plant enough to elevate it to leader of the pack?