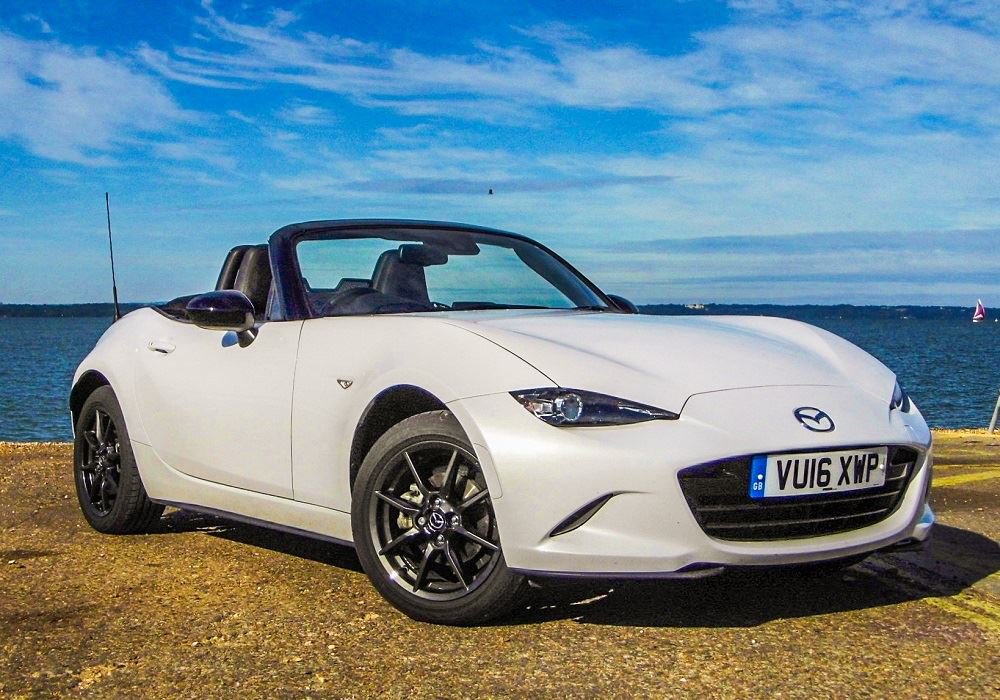 As convertibles go, my Lifetime Garage of Ten would certainly house the venerable Mazda MX-5 roadster. It’s a traditional two-seat sports car with a lightweight body, small engine and rear-wheel drive. It has a quick-folding manual fabric roof and is among the least expensive convertibles to buy and enjoy as a daily drive.

When the Mazda MX-5 arrived in 1989, it showed the world that an affordable, reliable, and extremely fun sports car was very possible. Consequently, it sold like well heated cakes to the point that now in only its fourth generation, the MX-5 continues to be the best-selling convertible sports car in history with more than 1.1 million MX-5’s sold globally. Indeed, Mazda is quite unapologetic about the fact that this model alone saved the company back in darker economic days.

The 2016 Mazda MX-5 is 105 mm shorter and 100 kg lighter than its predecessor, putting its curb weight at an entertaining 1,000 kg. It incorporates the latest in Mazda's SKYACTIV technology and adopts the corporate ‘Kodo’ design language first introduced so elegantly on the Mazda 6 back in 2013. 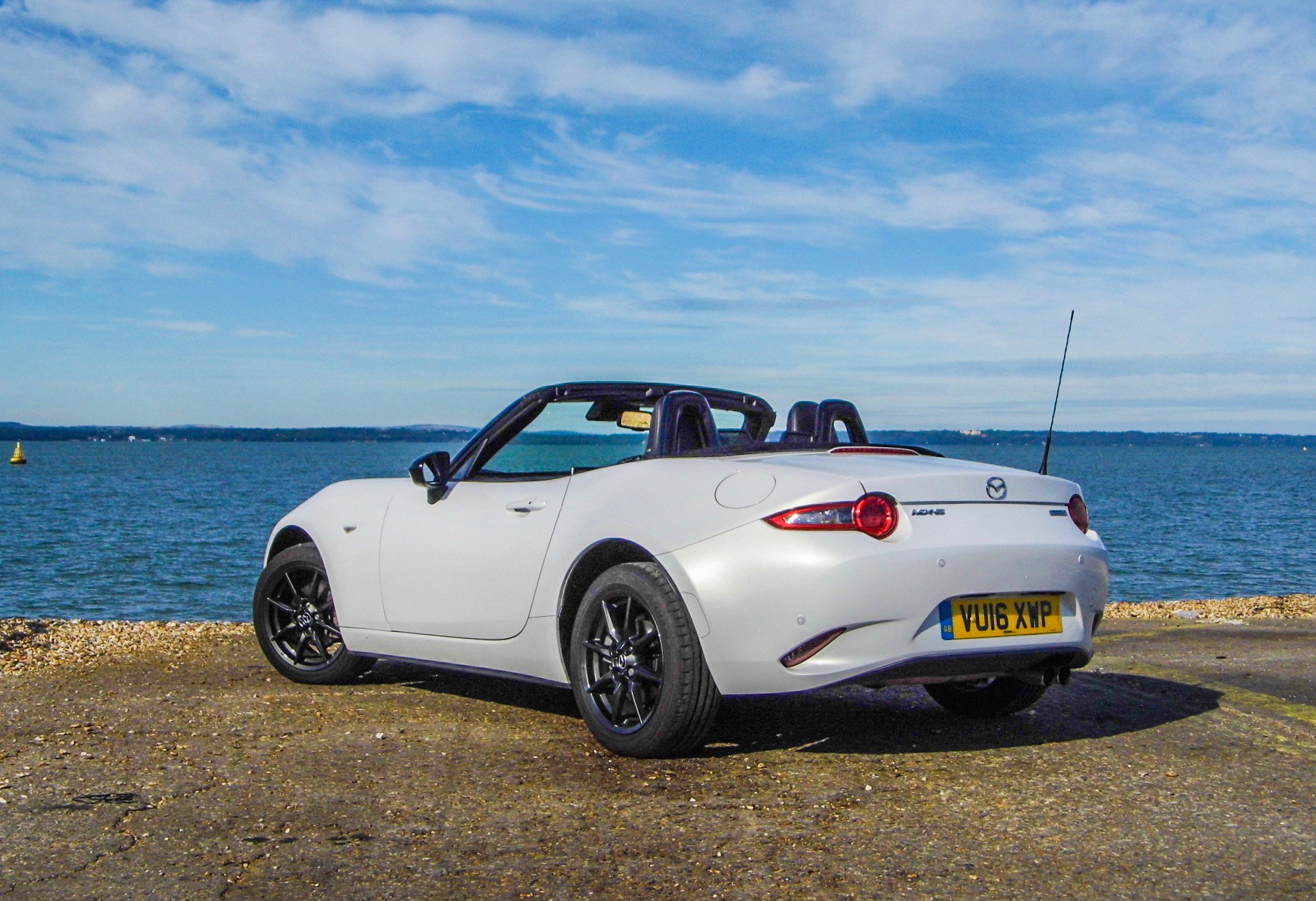 The MX-5 has always been a compact sports car – cosy even. This fourth-generation has been significantly reduced in overall size, reinforcing its envious reputation as a dynamically superb driver’s car with immense likeability.

In conforming to Mazda’s latter-day Kodo design language, the cuteness and curves of previous generations have been replaced with severe angles, pointy creases and sharp edges. It works wonderfully on the firm’s hatchbacks and saloons, but I’m not convinced of its suitability on the MX-5.

Fortunately, what’s left of the previous car still has that classic sports car shape – the long bonnet, cosy two-seat cabin and a short boot – and with the cloth top up or down, it unmistakably remains an MX-5. The larger grille and new, low profile headlights make this new generation appear more aggressive than the previous three versions which, in all fairness, may have been what the designers had in mind. 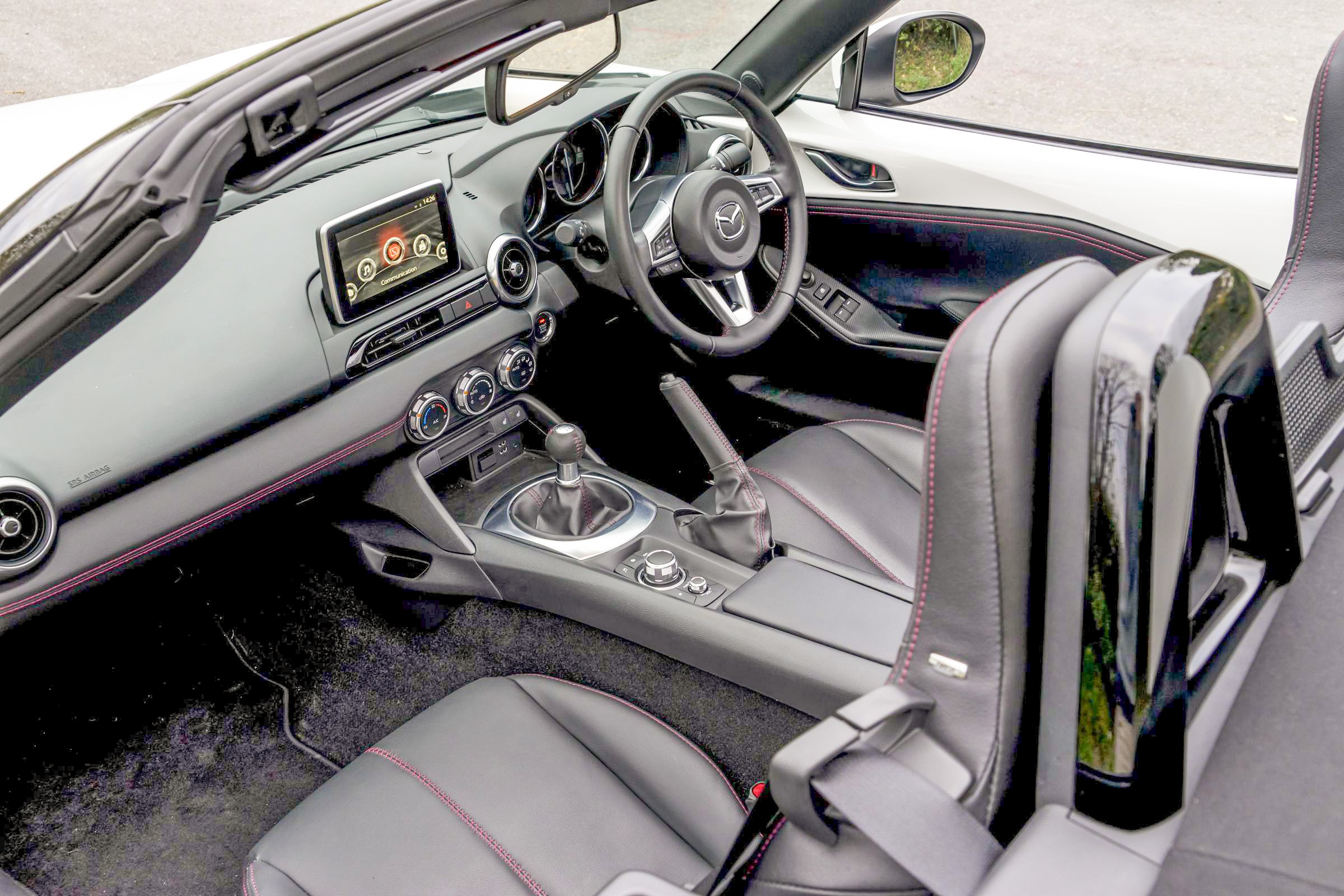 True to form, the new Mazda MX-5’s interior is snug and the driving environment is very focussed on the driver. Getting in and out isn't particularly difficult and the seats are surprisingly comfortable. The quality of the materials has improved significantly for this generation and for the price, the whole package is pretty spot on.

The controls are logically arrayed around the driver and there’s an excellent touchscreen interface on mid and upper level trim models with intuitive menus and crisp colour graphics.

The manual convertible top is exceptionally easy and quick to use. Practiced operators will be able to flip it open in one easy over-the-shoulder motion without leaving the driver seat, and raising it requires equally little effort. 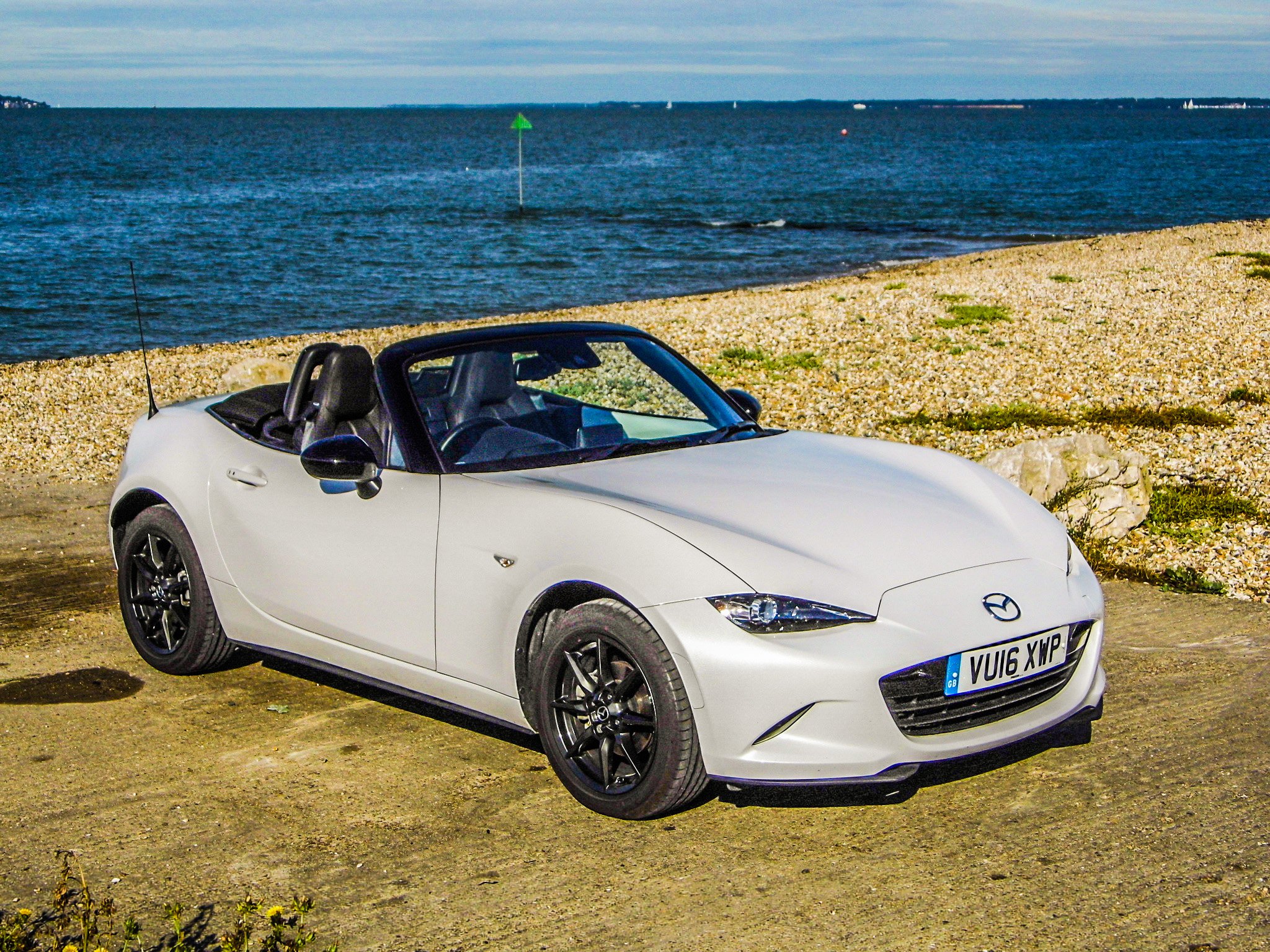 Step up to the SE-L Nav and more goodies can be had in this little fun pot, like climate control, cruise control with speed limiter, LED daytime running lights, 7-inch colour touchscreen display, DAB radio, Bluetooth and of course, satellite navigation. 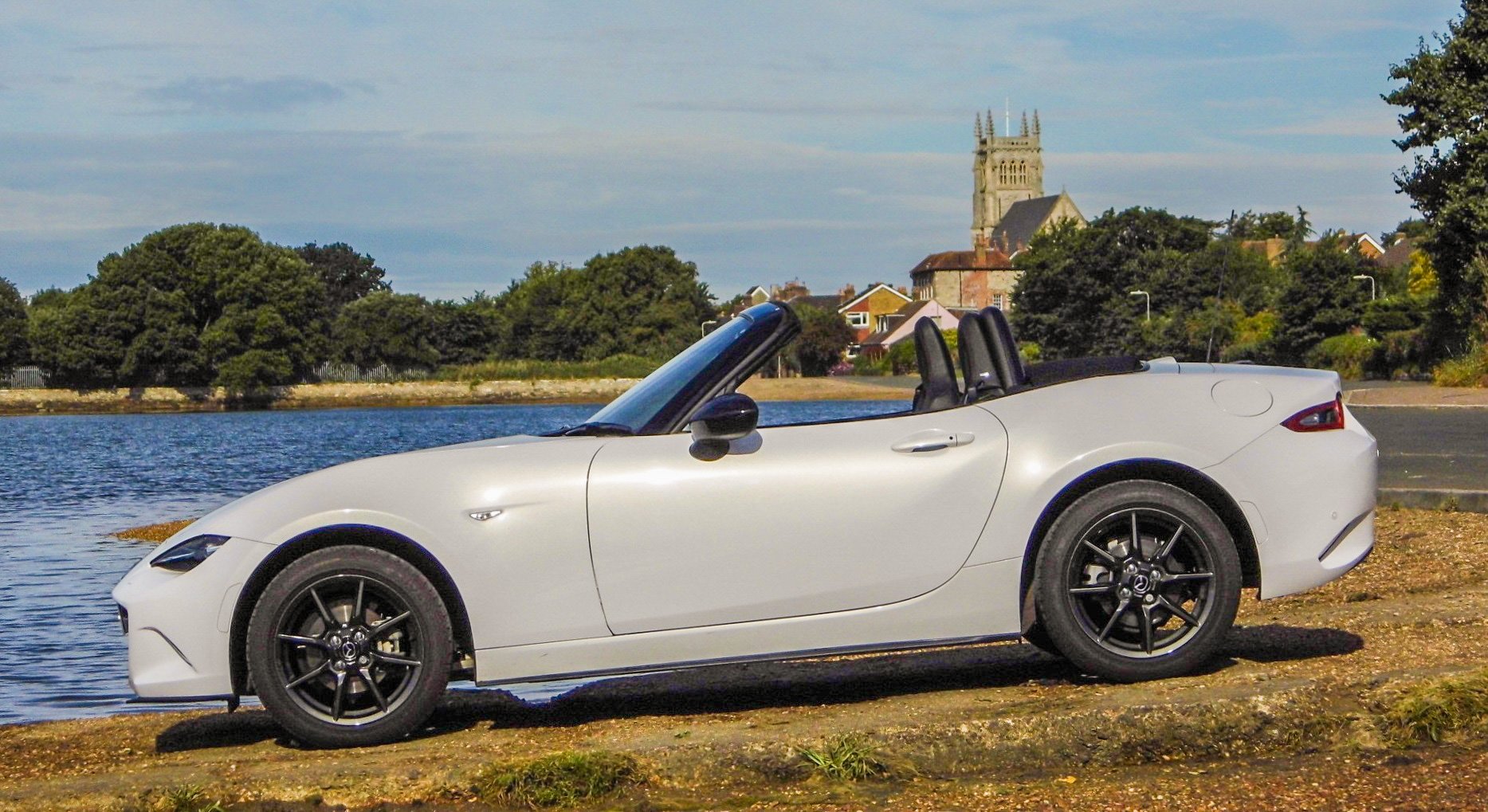 In true sports cars like the MX-5, the chassis should always be the star of the show, with outright performance being a lower priority. Mazda have decided to offer just two four-cylinder petrol engines of 1.5-litre and 2.0-litre capacity, both of which are mated to a six-speed short-throw manual gearbox. There is no automatic option available on the rag top convertible. This is reserved for the new MX-5 RF (retractable fastback) hard-top launched just last month.

The 1.5-litre engine is the same deployed in the Mazda 3, but tuned to offer an extra 10hp. That power of 130hp might not seem very much, but in a model that weighs less than 1,000kg, it offers sprightly and entertaining performance.

From a dead start, 60mph arrives in a respectable eight seconds and the willing engine is more than happy to nudge its 7,500rpm limit. Some may prefer the extra throttle flexibility that comes with the more powerful 2.0-litre, but few will lament choosing the 1.5-litre engine which is far more suited to the well-engineered chassis. Less is more, as they say.

The manual gearshift is still as brilliant as it always has been in the MX-5, the six-speed ‘box offering short, light and positive shifts. The pedals are superbly placed but there is no resting place for your left foot which can become tiresome on longer, inter-city journeys. 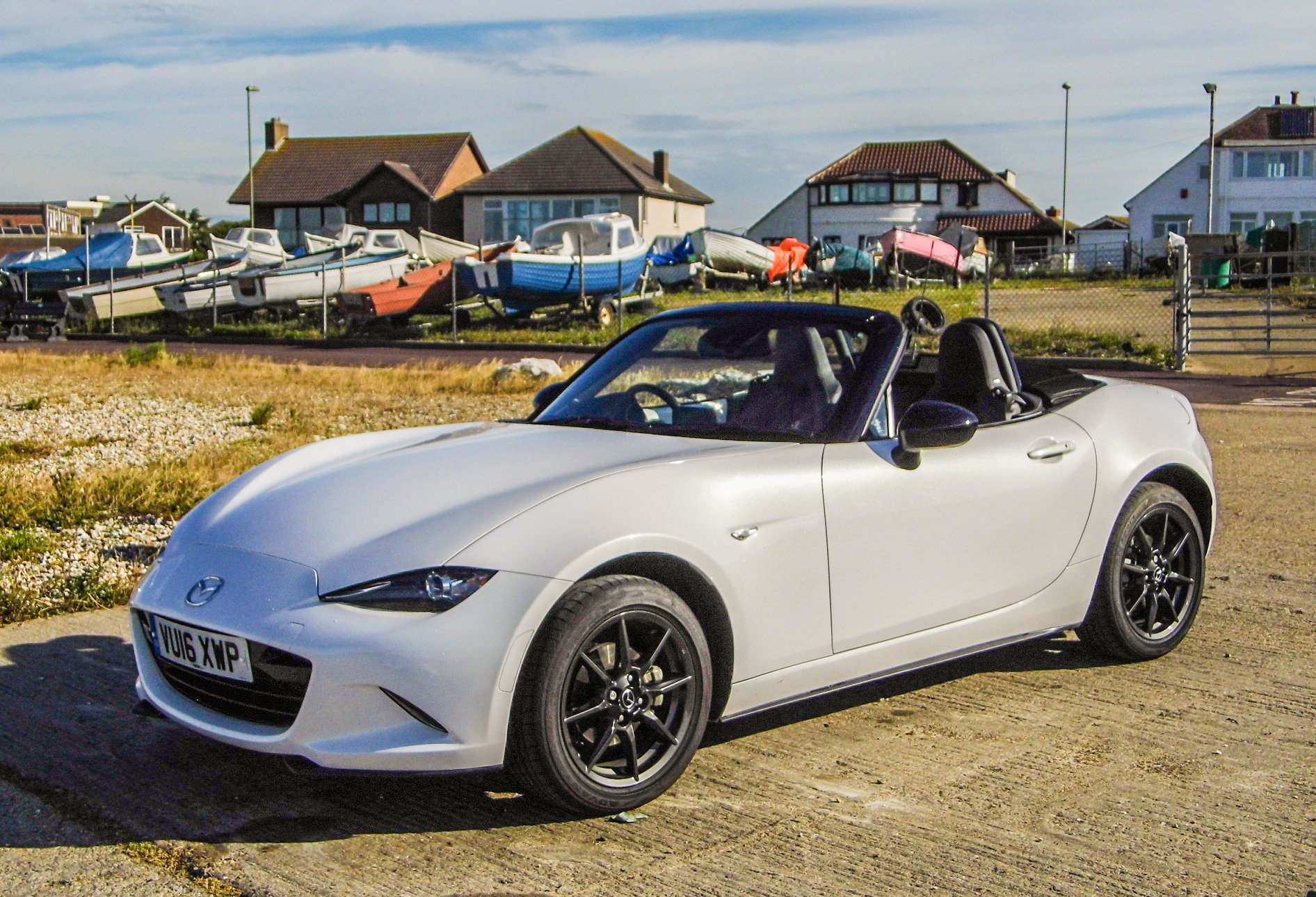 The 130hp 1.5-litre SKYACTIV-G petrol engine is arguably the one to have with this car, offering everything you need and nothing you don't.

Sure, it’ll max out at 127mph, but straight line speed was never what the MX-5 was about. Instead, this model has always majored on tactility, usability, comparatively entertaining grip levels and a chassis that's helped generations of drivers grasp the joys of rear-wheel drive dynamics.

Through the twisty bits, MX-5 buyers will certainly be extracting plenty of enjoyment from the sweet chassis. There's a little more roll through corners than you might expect and the engine can't boast a particularly inspiring soundtrack but nonetheless, there's a huge amount of fun to be had behind the wheel.

The little Mazda has undergone extensive mechanical changes this time round, to make it the finest handling version yet. In order to improve weight distribution and lower the centre of gravity, the engines sits 13mm lower and 15mm further back than in the old model, offering incredibly balanced road manners and frequent ‘wow’ moments.

The steering is quick, sharp, and communicates the necessary information to give the driver confidence along more challenging roads. Barely a flick of the wrist sends the MX-5 diving into a corner while the weight savings over the old version are tangible in the way that a series of bends can be strung together so smoothly.

The engineers have done a splendid job on the suspension, too: firm enough to let you know you’re driving something sporty, but with enough compliance to offer surprising levels of comfort on longer journeys. 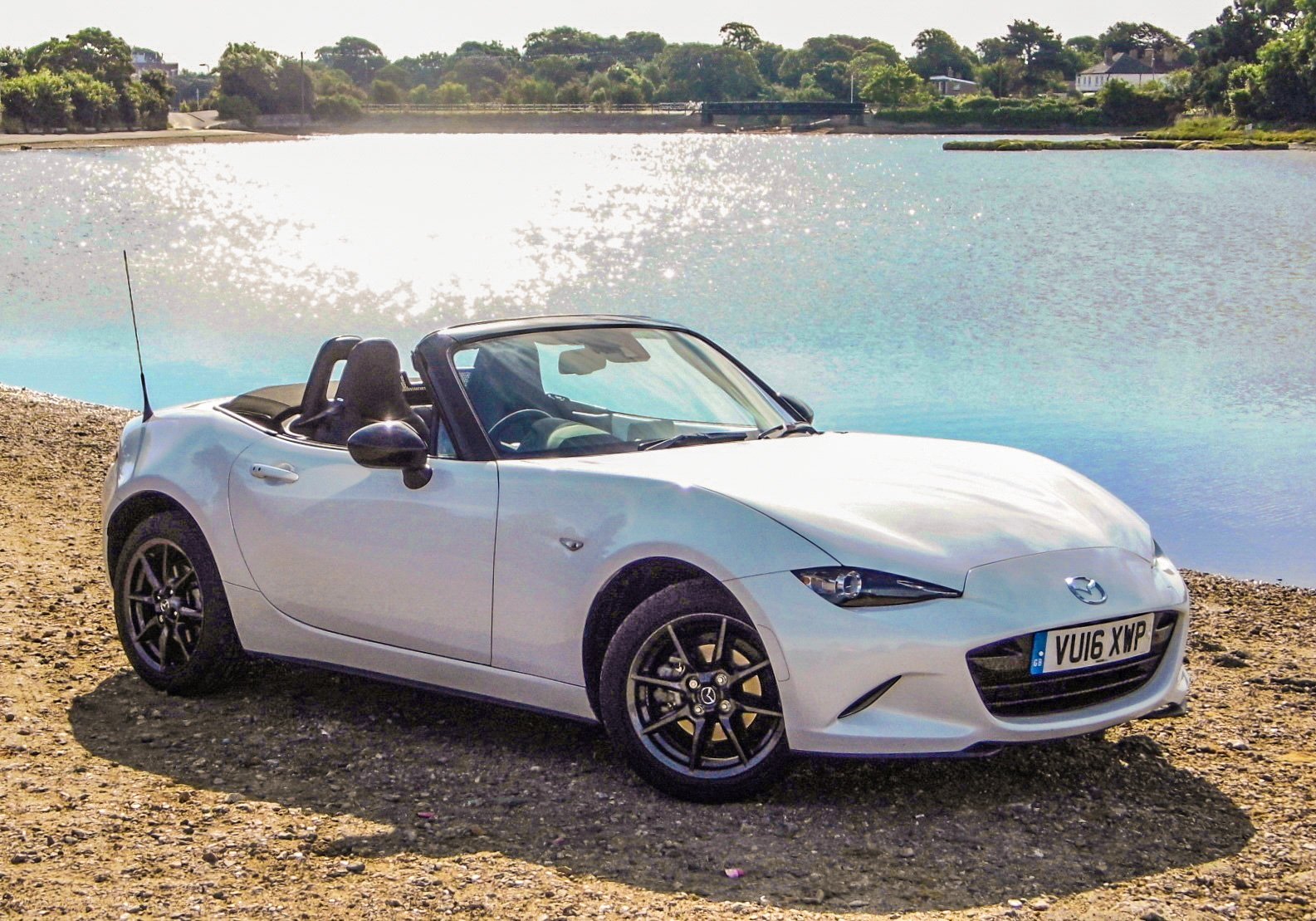 The MX-5 has reinvented itself several times through recent decades, but never quite so spectacularly as this. It combines a highly active and involving chassis, engines that are responsive and eager to rev and improved levels of quality and luxury.

The Sport Nav as tested has more goodies than most will ever want, but to keep it real and in tune with the MX-5 spirit of not overcomplicating things, the car’s best value lies with the more honest mid-spec SE-L Nav.

Take a look at our latest Mazda MX-5 deals

We take on the BMW M4 Convertible – with added kick in the form of...

Grab a Black Friday Bargain with delivery in time for Christmas!