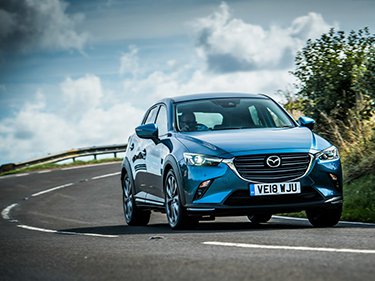 Despite the misinformation surrounding diesels and the all-enveloping uncertainty of Brexit, sales volumes of sports utility vehicles and crossovers continue to rise around 23 per cent annually, with the body style making up almost one in six of all current car sales. 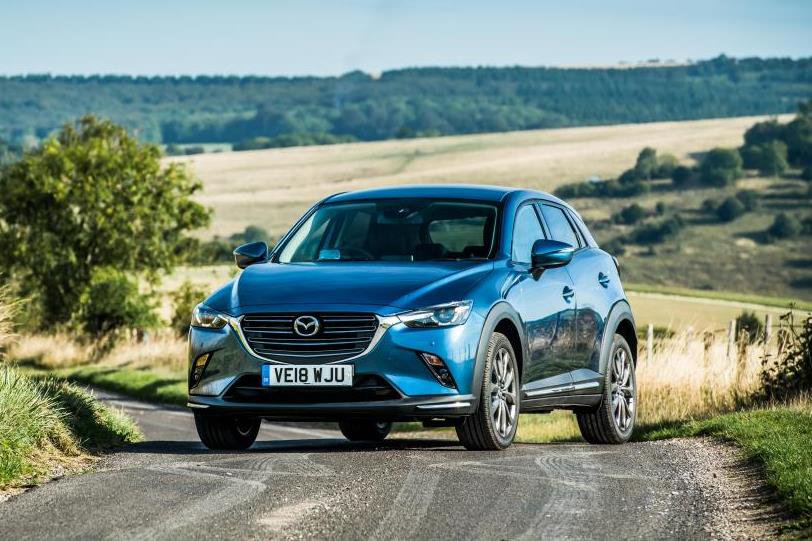 Most are contemporarily styled, confined as they are to their respective in-house style and design ‘languages’. Others, like the Nissan Juke, Vauxhall Mokka and Ford EcoSport continue to forge their own paths in the looks department. But, there are few, if any, that wear their curves, lumps and bumps in all the right places better than Mazda’s CX-3 compact SUV. 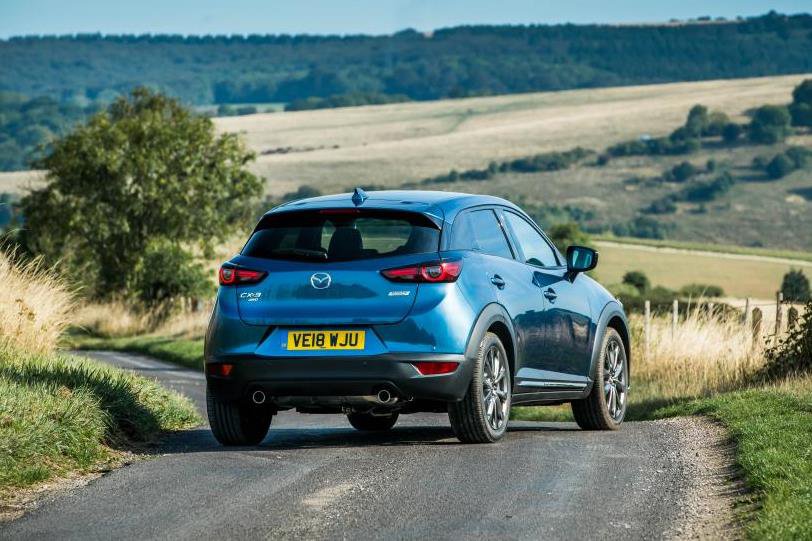 Riding on an adaptation of the chassis that underpins the smaller Mazda2, the Hiroshima-built CX-3 arrived on our shores a little under four years ago. In the summer of 2018, it underwent a series of subtle updates to its exterior styling plus a host of technological and interior improvements, along with the introduction of an all-new 1.8-litre SkyActiv-D diesel engine.

Towards the end of last year, I had the pleasure of spending a few hours with the current Mazda CX-3 and recorded some thoughts…

Style is a significant reason why people park SUVs and crossovers on their driveways, so any car in this class is under immense pressure to deliver the goods. 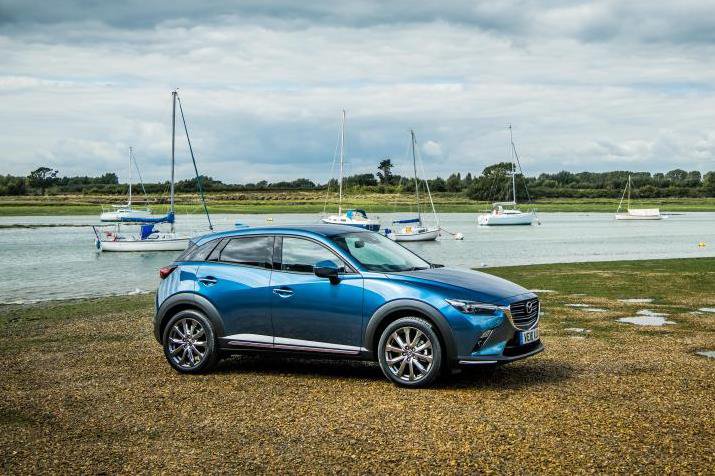 When launched in 2015, the CX-3 adopted Mazda’s familiar and well-received SkyActiv technology and ‘Kodo: Soul of Motion’ design philosophy. Refreshed last year to keep it competitive in an ever-challenging market, the CX-3 wears a restyled grille and darker side pillars to reinforce its floating roof effect and emphasise its coupé-like profile. The tough-look cladding over the wheel arches remain and Mazda’s signature Soul Red Crystal metallic paint is also available. 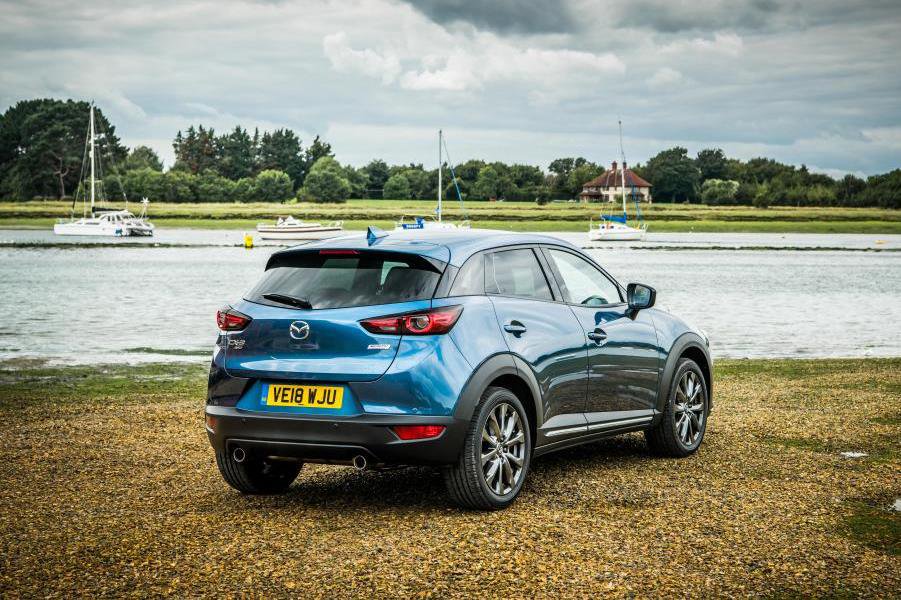 Its front continues to feature the predatory headlamp styling which instantly identifies it as a member of the Mazda family and, riding a full five centimetres higher than the current Mazda2, the CX-3 offers the commanding view of the road favoured by buyers in this sector.

However, it’s inside where most revisions will be noticed. The centre console has been redesigned due to the adoption of an electric parking brake (with auto hold) and now flows more elegantly into the dashboard, while Mazda’s rotary multimedia commander has been relocated slightly more forward for improved usability. The centre armrest is now padded and there’s also additional storage underneath. 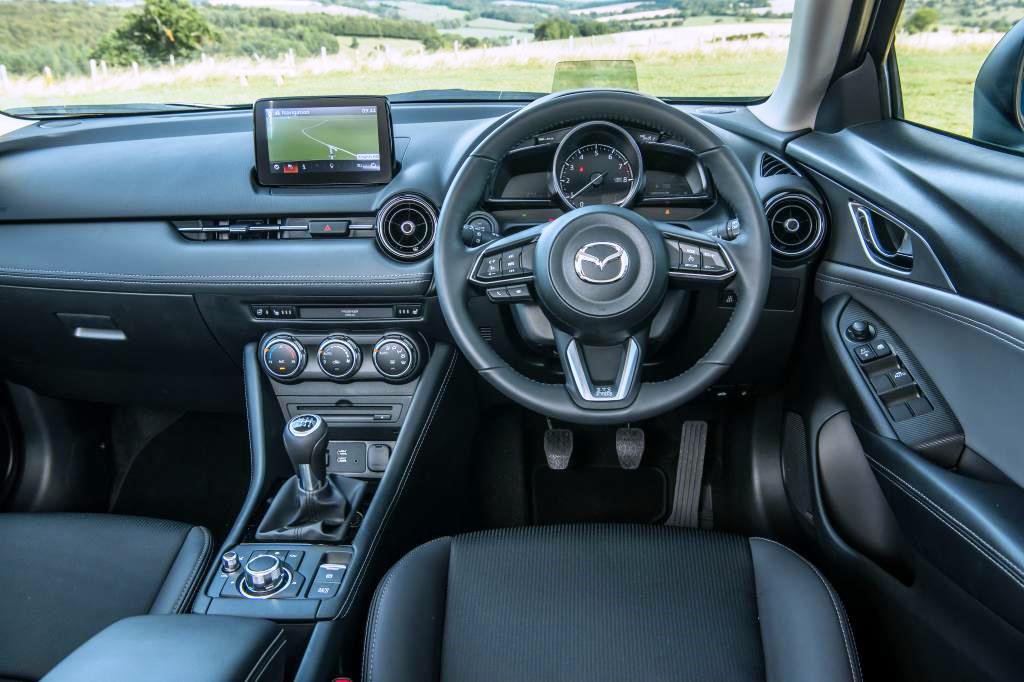 Cabin refinement has been improved with upgraded door sill trims, thicker sound isolation in the doors and enhanced rear glazing. In addition, an increase in the cabin headliner thickness absorbs more sound to deliver a hushed cabin. 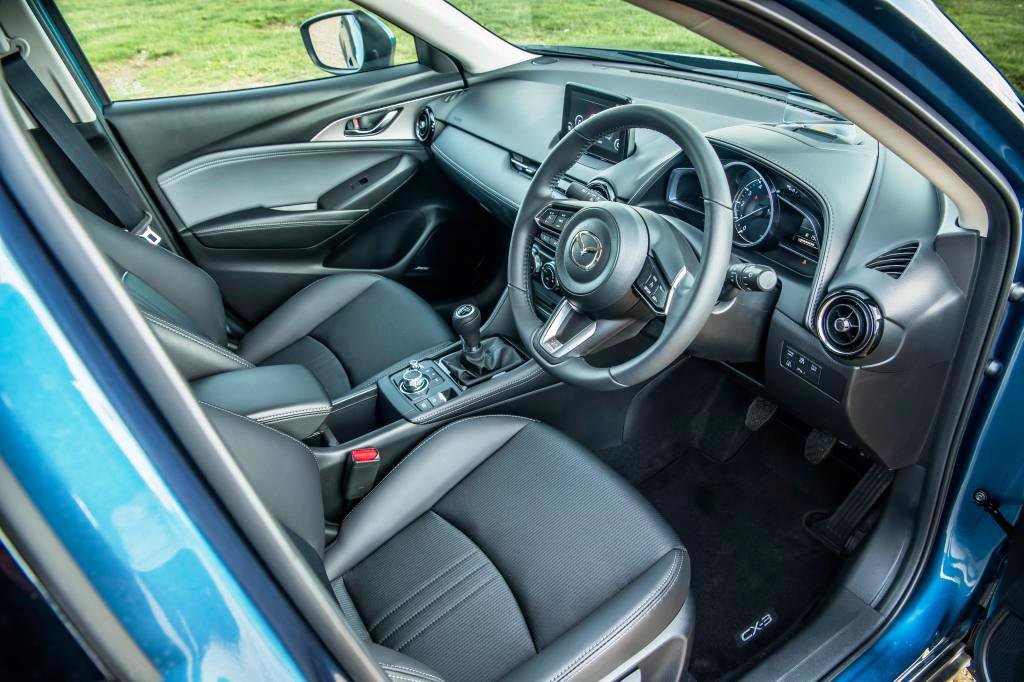 The driving position has lots of adjustment and the standard touchscreen infotainment system is reasonably easy to use, although several years after it was first introduced, it’s starting to feel somewhat dated. In addition, it doesn’t offers Apple CarPlay or Android Auto as standard, unlike many of its rivals. They are available as a dealer-fit, but you’ll have to part with several hundred pounds for the privilege. Rather stingy of Mazda, I thought. 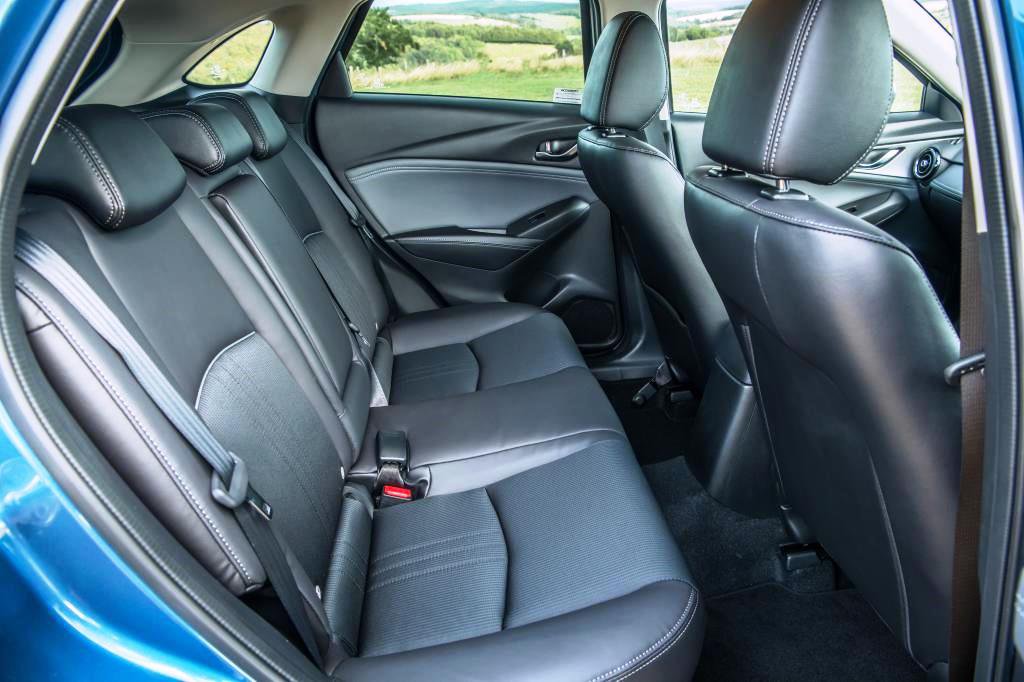 Ease of driving is helped by controls that are placed within comfortable reach, clearly labelled and therefore simple to understand. In a welcome move, Mazda continues to offer heating and ventilation controls via large and intuitive rotary dials, unlike the fiddly (a.k.a. dangerous) touchscreen icons found in many rivals. Yes, Citroen…I’m looking at you.

The CX-3 has a 350-litre boot with the row two seatbacks up, which beats the likes of the Ford EcoSport and Nissan Juke. That figure jumps to 1,260 litres with row two folded flat. The boot is a well-shaped space plus there’s a shallow underfloor storage bay. The false floor can be folded away for bonus practicality and the boot lip isn’t pronounced, but the opening is high thanks to the car’s raised ride height. 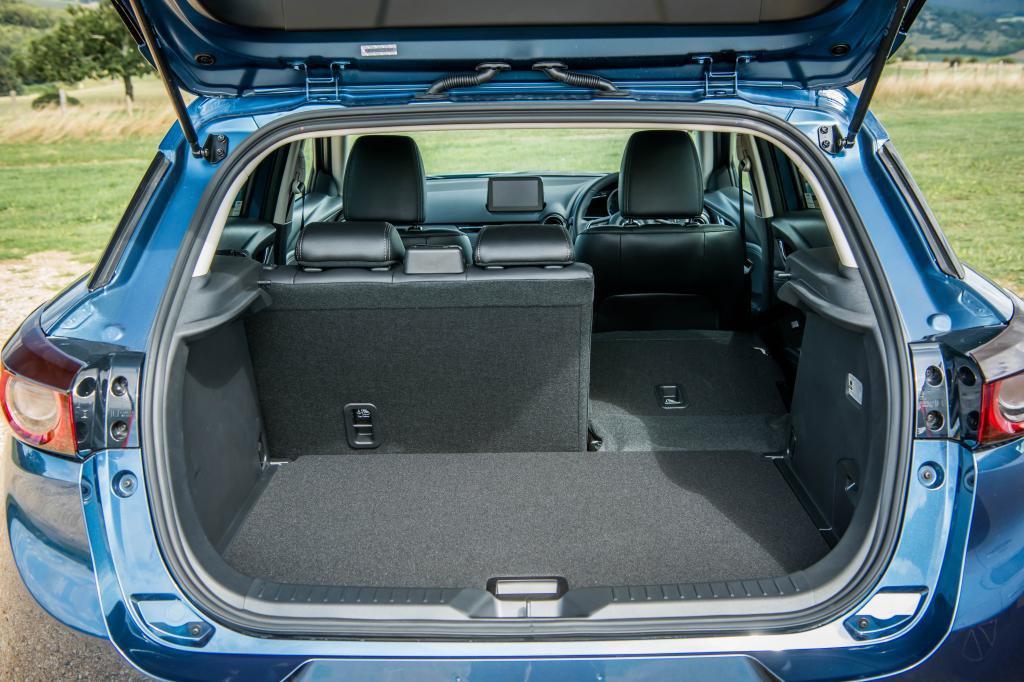 The 2018 update saw the CX-3 range revised so there are now only three trims, but all are pretty well equipped. There's SE Nav+, SE-L Nav+ and Sport Nav+. As the names suggest, all cars have navigation via a seven-inch touchscreen and rotary controller, while Bluetooth, a DAB radio, electric heated door mirrors and push-button starting are also included. Go for a Sport Nav+ model, and you won't be found wanting for kit, with luxuries such as leather furniture, a Bose stereo and a head-up display all listed in the toy box. 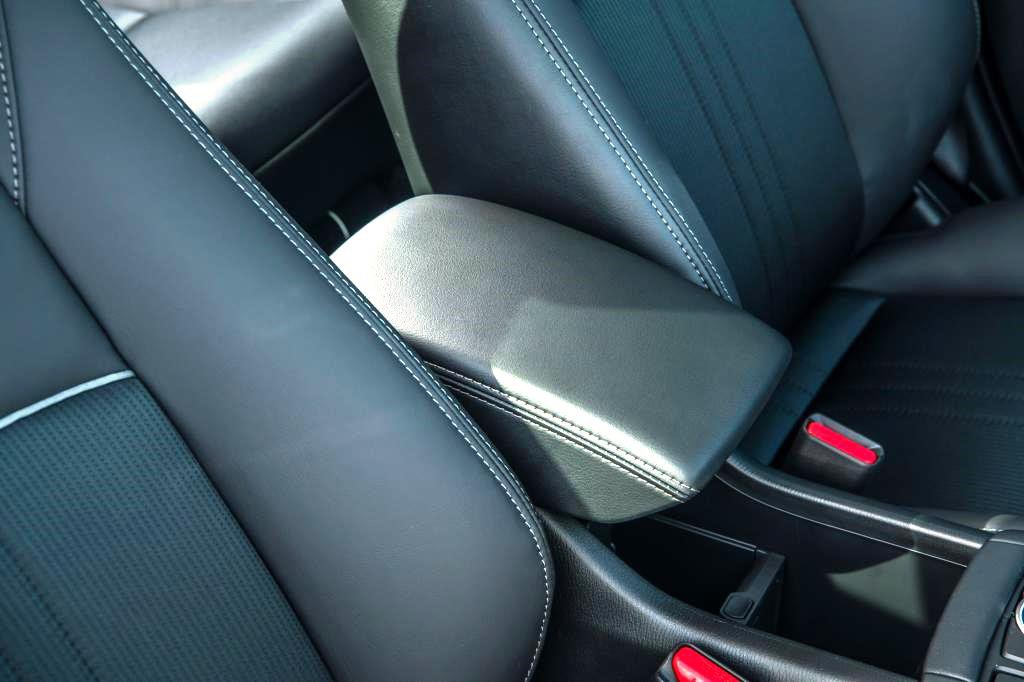 The current engine line-up available in the CX-3 comprises of one 2.0-litre SkyActiv-G petrol engine offered in two states of tune (121 and 150hp) and the 115hp 1.8-litre SkyActiv-D diesel introduced last year to replace the previous 1.5-litre unit.

Diesel
The new diesel is certainly the best for fuel economy and CO2 emissions and refinement is exceptional, too. It is unerringly quiet at idle and smooth under acceleration, although if you really work it hard, it does tend to grumble a little.

There's some hesitation lower down the rev range, but with 260Nm of torque, mid-range power is strong and consistent. The sprint from 0-62mph takes 9.9 seconds and the diesel model has a top speed of 114mph. Unfortunately, this engine is only available on the top Sport Nav+ model – in manual guise. 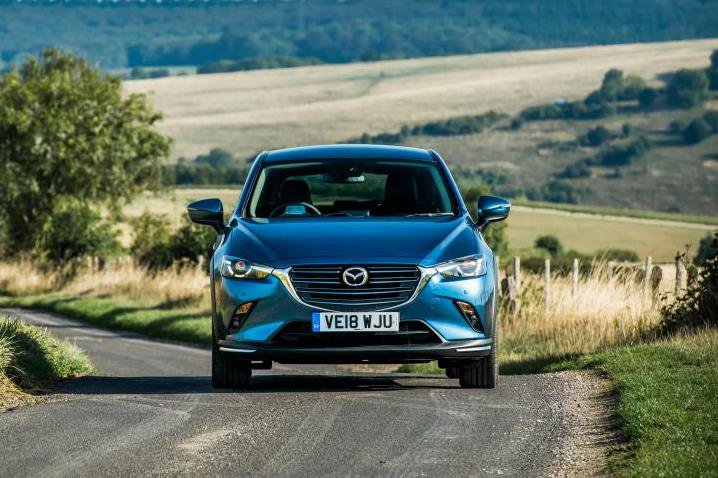 Petrol
The Mazda CX-3 is available with two versions of the brand’s 2.0-litre SkyActiv-G (gasoline) petrol engine, producing either 121 or 150hp. The 121hp petrol is slightly quicker than the diesel, taking nine seconds to go from 0-62mph, while the 150hp is the quickest in the range, going from 0-62mph in 8.8 seconds. Both are very responsive when you need extra power and generally stay quiet and smooth.

With just 206Nm of torque, both petrol engines need to be worked harder than the diesel engine to produce the same results, as they only get into their stride around 4,000rpm. Plus, they sound increasingly strained under hard acceleration. However, they do feel more responsive overall compared to the slightly sluggish, but overall stronger, diesel.

Transmissions
Both the manual and automatic gearboxes are six-speed units with the manual a particular delight to use with its slick and precise shifts. There’s nothing much wrong with the auto either, though the paddles fitted behind the steering wheel of the top-spec Sport Nav+ model tend to feel a tad inappropriate. 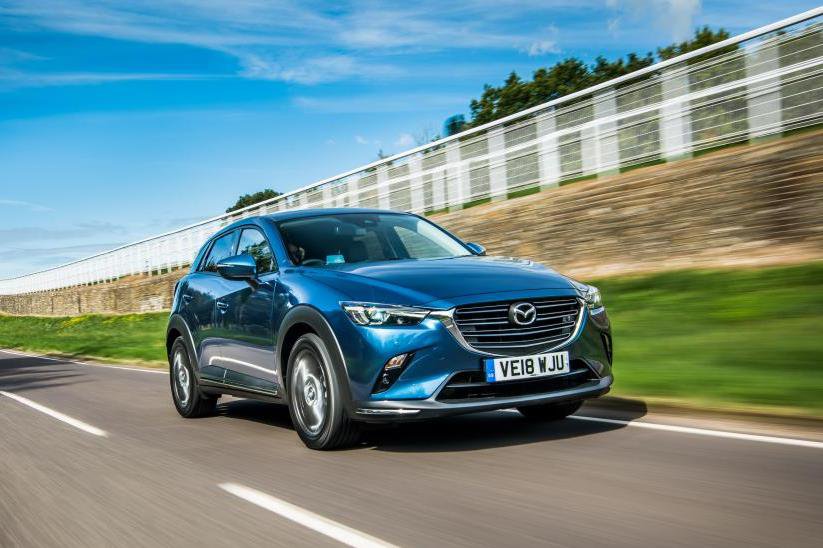 If you’re after a compact SUV that’s great fun to drive, you’re on the right page.

Whether you go for front or four-wheel drive (both are available), the CX-3 offers plenty of grip when needed. The steering, which was revised in 2018, remains sharp with purposeful, meaty weighting, while the body control stays impressively tight in all situations. 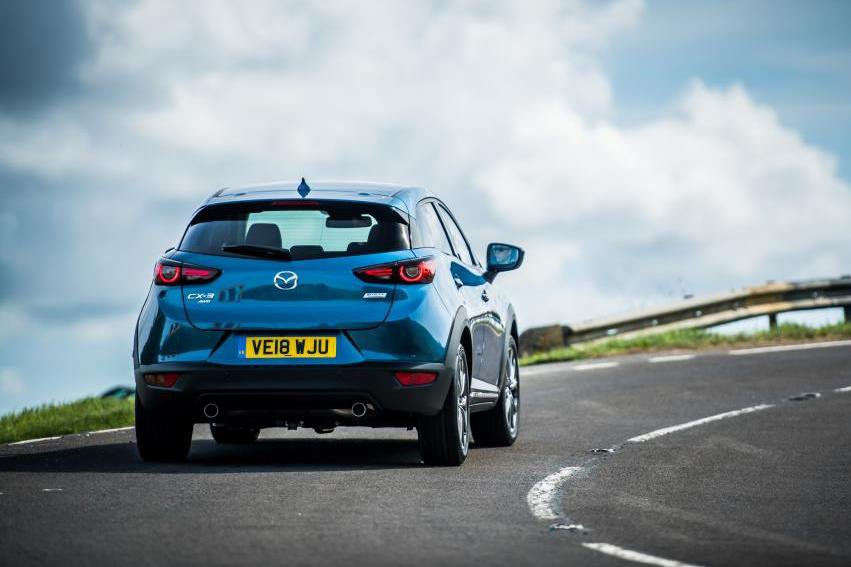 The taut suspension, again revised in 2018, is tuned for handling over ride quality, so it’s not as squidgy as the blancmange-like a Renault Captur, but it never gets to the point where you’ll feel uncomfortable.

Around town it soaks up imperfections in rutted roads reasonably well. Hit a pothole at speed, however, and you’ll feel (and hear) an unpleasant jolt through the Mazda’s cabin – especially in top-spec Sport Nav+ cars with their larger wheels. Stick to a lower trim grade model with the smaller wheels and bumps in the road will be slightly less noticeable, plus you’ll hear a touch less tyre roar at motorway speed. 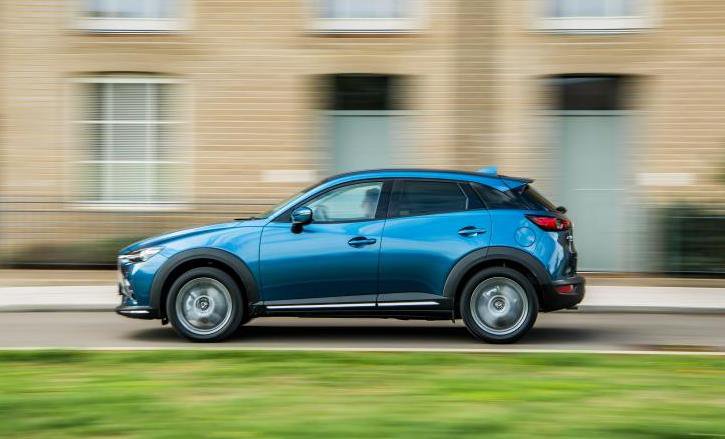 To be sure, the CX-3 is one of the most entertaining compact SUVs on sale, both around town and on a twisty backroad. It’s certainly no sports car but it feels light and nimble – like a spritely hatchback rather than a higher-riding SUV.

The CX-3 was last crash-tested by Euro NCAP after its 2015 introduction, when it scored a four-star rating. The model continues to feature a host of safety technology, including electronic stability control, six airbags, hill-hold assistance and an emergency stop signalling feature on all models. 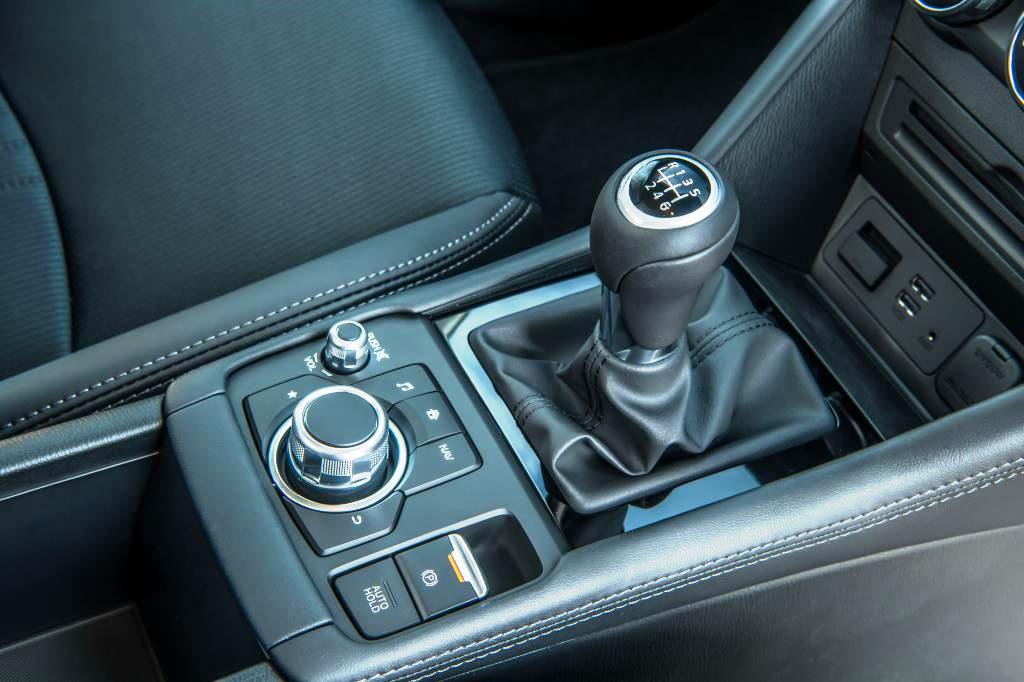 With new sector rivals arriving in the market seemingly on a monthly basis, the Mazda CX-3 continues to offer broad appeal for anyone's compact SUV/C shortlist. One of its main attractions is that it's probably the best of the lot to drive. Add great styling, generous equipment and an easy-to-use infotainment system into the mix, and there is very little not to like. 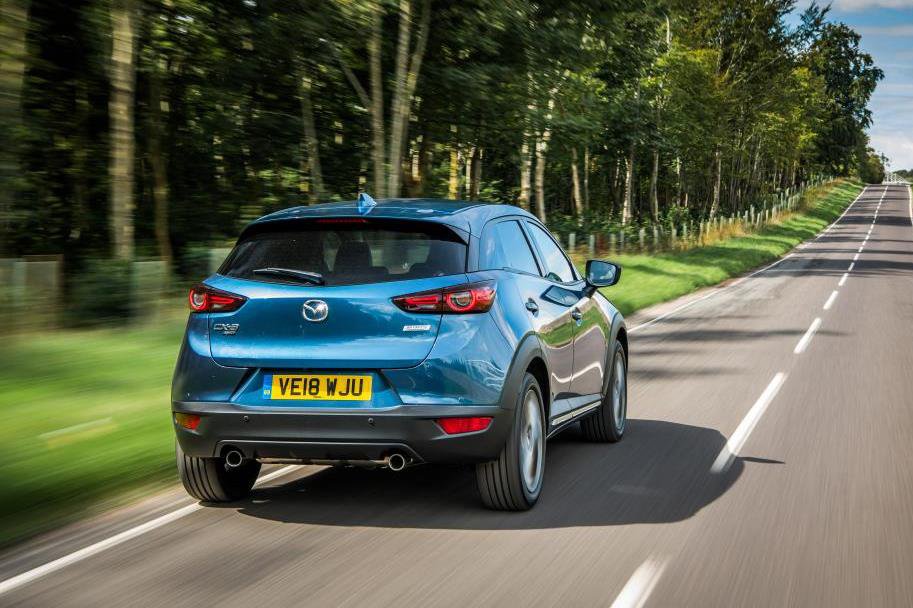 Positioned as the gateway model to the Lexus SUV range, is the UX...