Lexus ES 300h: A car for cruising, not for bruising

The Lexus ES is an executive saloon with classmates that include the Audi A6, BMW 5 Series, Jaguar XF and Mercedes E-Class.

This is the seventh generation ES, but it’s the first time the model has been sold in the UK, replacing the Lexus GS that’s now slipped into retirement. Globally, the ES is only second to the RX SUV in Lexus’ sales charts.

The latest ES rides on the Toyota New Global Architecture (TNGA) that underpins other Toyota products such as the Camry and new RAV4. The new platform stretches and widens the car compared to last year’s model, and although the ES wears a disproportionately large grille up front, it seems to match the rest of the body’s lines, which are sharp and give the ES a very sleek profile.

The oversized Lexus spindle grille will remain a point of contention, but it seems to work better on the sleek ES than other Lexus models. The Lexus ES’ interior borrows plenty of design features from the luxurious LS saloon. You get a similar sweeping dashboard with intricate inlays, swathes of hand-stitched leather and some lovely solid-metal door handles that feel every bit as posh as in the flagship Lexus LS. Every surface above the electric-window switches feels fabulously soft and squidgy, and all the buttons and switches operate with a pleasingly solid feel. 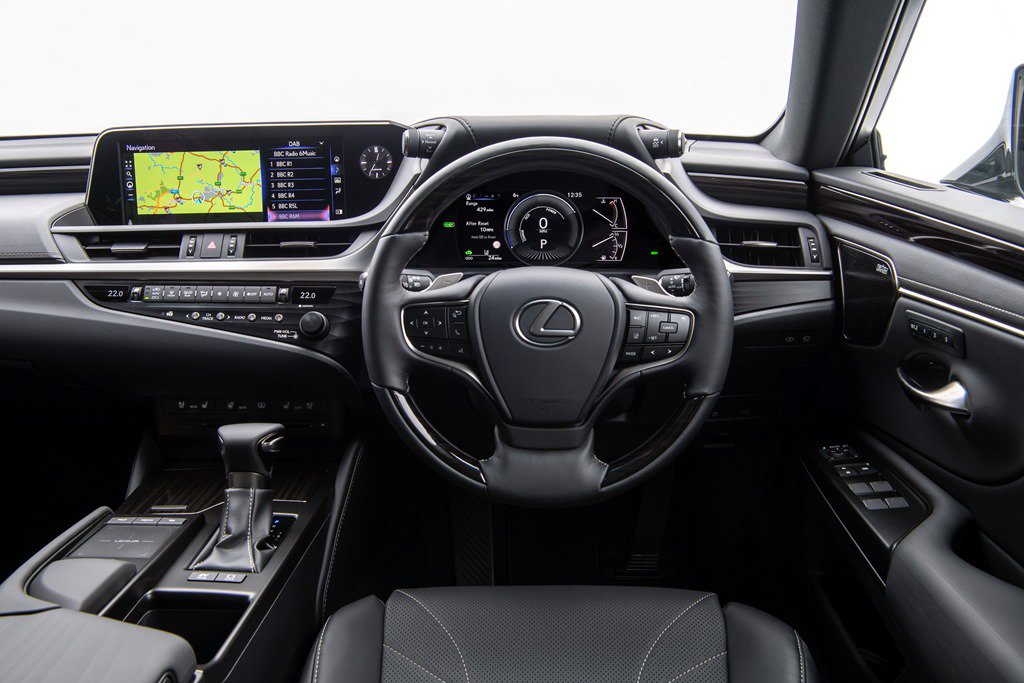 The dashboard features a similar infotainment display to the BMW 5 Series, but it sits in a slanted frame that leans towards a second screen where you’d usually find a set of analogue dials. These two units are bright, colourful and look especially flashy when you press the button to start the engine and a vivid welcome animation plays across them simultaneously. 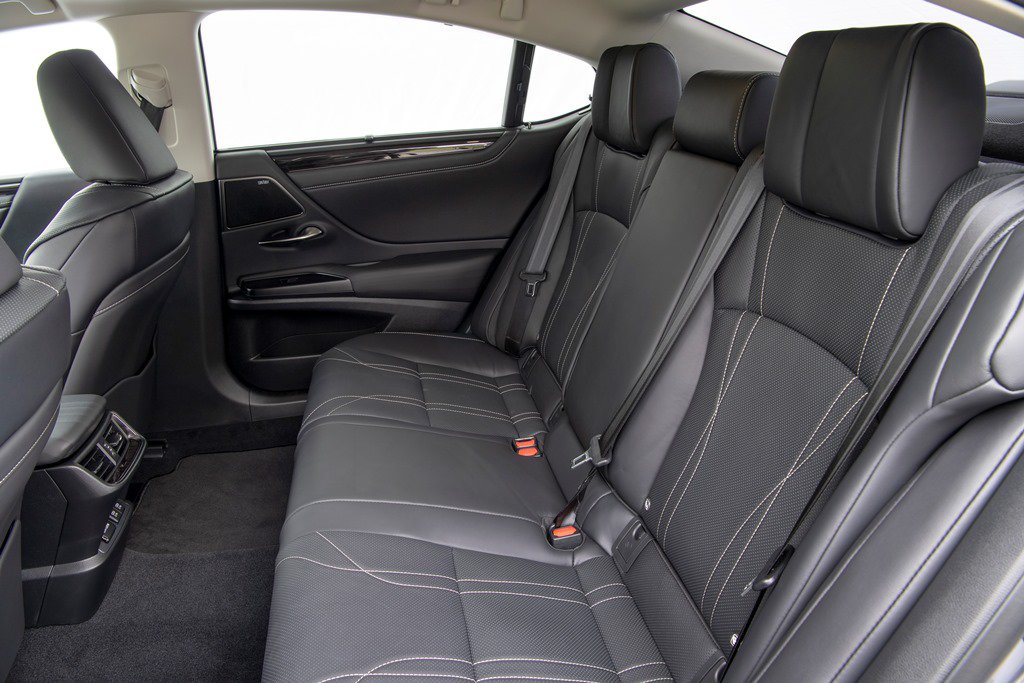 Elsewhere on the dashboard, you get a simple, intuitive row of buttons for the heating and ventilation controls and a few shortcut buttons and a volume knob for the radio. Almost as an afterthought, the controls for the heated (and in Takumi versions, cooled) seats are tucked down by the centre console under the CD player.

The centre console itself is raised higher than in the likes of the Audi A6 so you feel slightly more cocooned in the Lexus ES. Similarly, the staggered dashboard design makes it feel as though you’re sitting in a low-slung sports saloon, even with the seat raised up high. 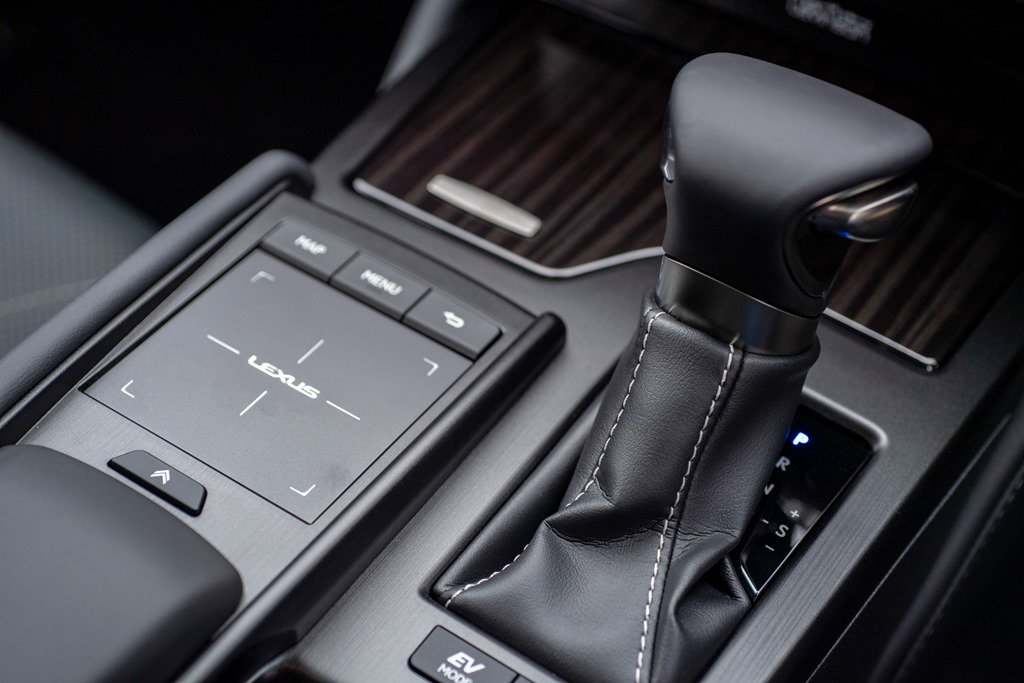 Pick an F Sport model and the trim piece that divides these two dashboard sections comes with a ribbed aluminium finish that mimics the construction of a traditional Japanese sword. These models also come with some more supportive front seats in black or red upholstery and a set of aluminium pedal trims.

Go for a high-spec Takumi model, and you get varnished wood trims, leather seats, a bigger central infotainment screen and an upgraded stereo. You can have leather seats fitted to the standard car as part of the Premium Pack, while the Optional Takumi pack for F Sport models adds the stereo and infotainment upgrades, but not the leather seats. 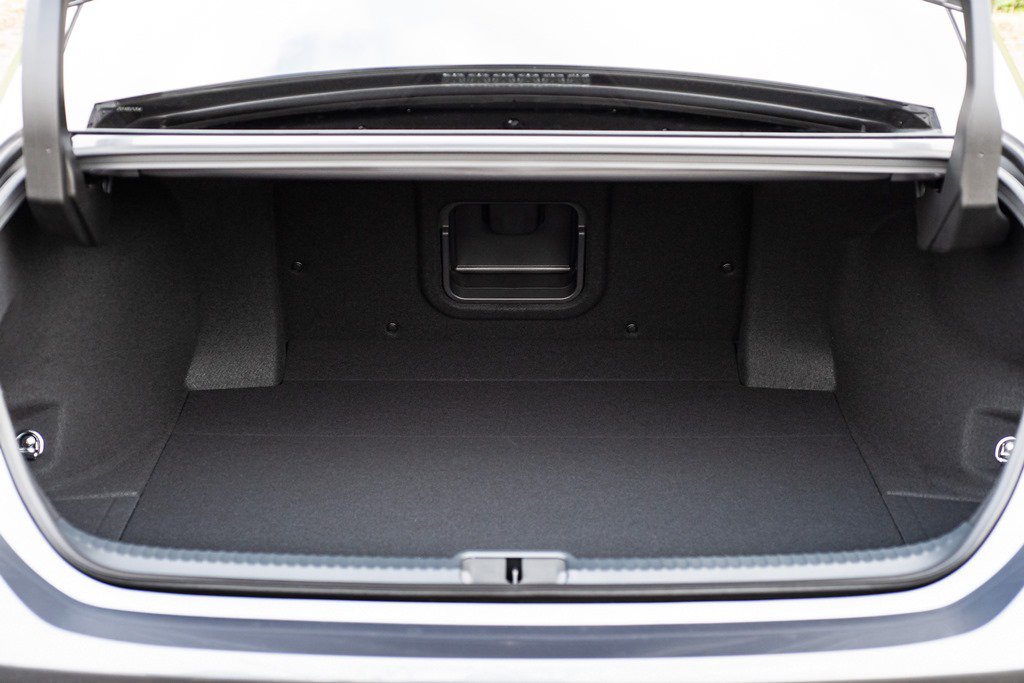 Saloon sales have declined in the UK partly because their boots tend to lack the flexibility and added practicality of SUV models. Such is the case with the ES because not only is the boot opening smaller than a hatchback, the rear seats are fixed in place and can't be folded down.

The loading aperture is wide at least, but there's a lip to load items over. Measuring 454 litres, the boot itself is also fairly small by class standards as the Audi A4 and BMW 5 Series both offer 76 litres more, while the Mercedes E-Class has 180 litres extra.

Step up to the mid-spec F-Sport trim and you get sporty touches like figure-hugging front seats and adaptive sports suspension, while a powered boot, heated reclining rear seats, a 360-degree camera, LED adaptive headlights, triple-zone climate control and a Mark Levinson sound system are all reserved for the Takumi. 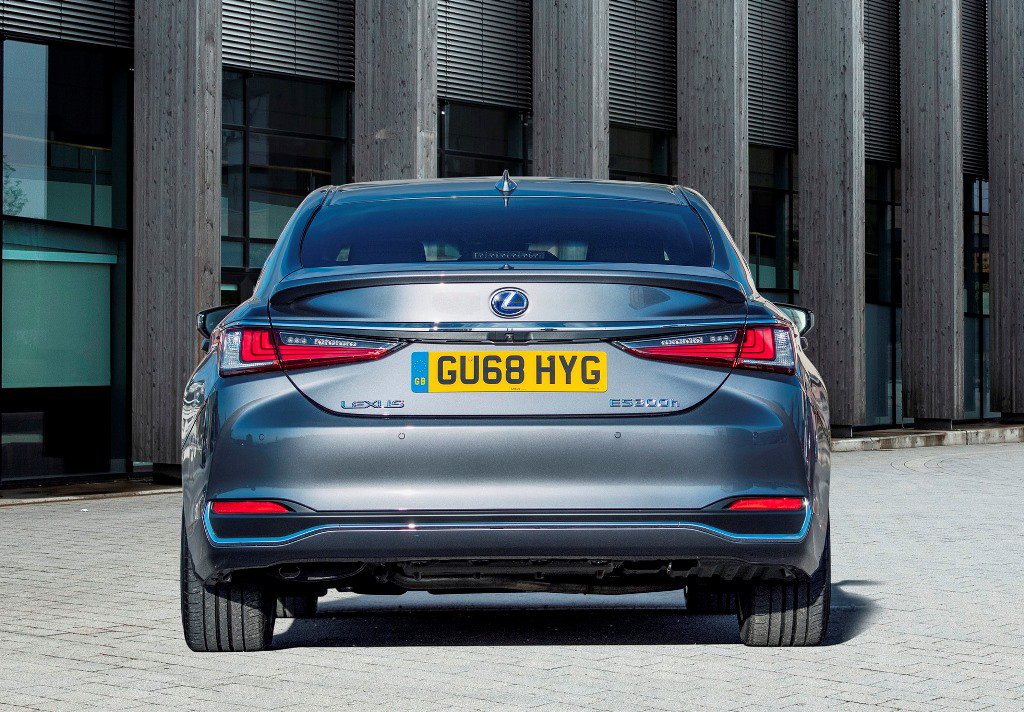 Like many Japanese models, options aren't as prevalent for the Lexus ES, but the F-Sport Tech and Safety Pack adds a wireless smartphone charger, upgraded LED headlights and a heated steering wheel. You can also add a Takumi Pack to the F-Sport trim, bringing most of the features fitted to the higher trim, including its 12.3-inch screen and Mark Levinson stereo. Trying to push on with the Lexus ES is missing the point somewhat. This is a refined and comfortable cruiser that takes on the Mercedes E-Class for relaxed long-distance driving. For that reason, the 19-inch wheels and stiffer suspension of the F-Sport model make the ride firmer and don’t feel as well suited to the ES’ laid-back nature.

The petrol engine and electric motors produce a combined 215hp which is enough for the Lexus ES to accelerate from 0-62mph in 8.9 seconds. 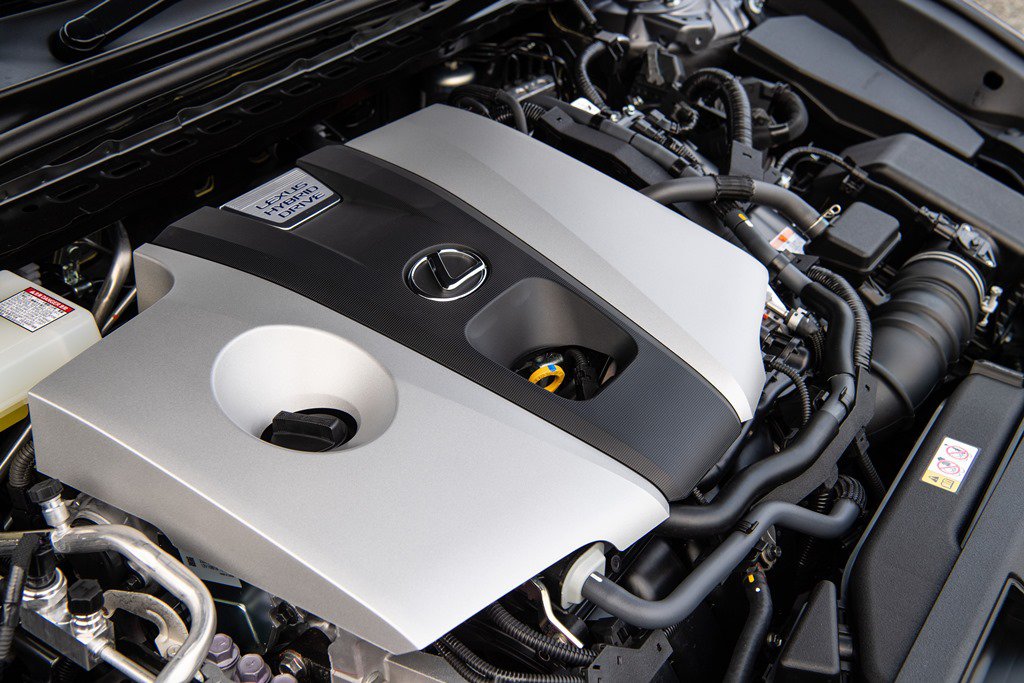 By using the electric motors around town and when you’re cruising on the motorway and restricting the petrol engines efforts to hard acceleration, Lexus claims the ES will return up to 59mpg. In normal driving conditions, however, you can expect to see a number in the mid-forties. You get a pair of paddles on the steering wheel to allow you to choose when to change gear, but the ES’ gearbox is slow to respond most of the time and sometimes completely fails to co-operate. It’s nowhere near as smooth as the conventional automatic gearboxes you get in almost any other large executive saloon. On the road, the chassis of the ES feels well sorted, with suspension that soaks up bumps nicely without allowing the body to wallow through bends and steering that's quite direct.

But keen drivers would be advised to look elsewhere because, while the hybrid system is better than ever, the Lexus ES is at its best when driven gently. Do so and it’s smooth and refined, but push harder and the ES doesn’t feel like it has quite enough grunt for a car of its size and weight. 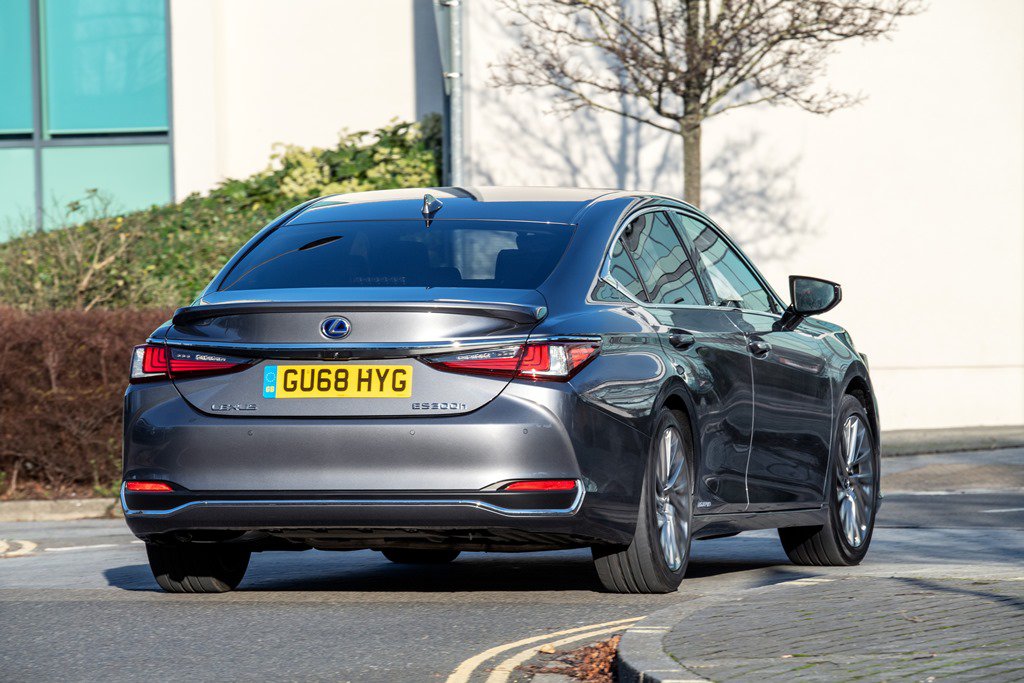 On a twisty country road the Lexus ES is perfectly easy to drive. There’s plenty of grip to help you smoothly carve from one corner to the next and its large body leans a great deal less in tight turns that you might expect. It doesn’t feel anywhere near as sporty as the likes of the BMW 5 Series, however – even in F-Sport models with their larger wheels and firmer suspension.

That being said, the Lexus ES has been designed to be a comfortable cross-country cruiser, not a sports car in a smart four-door suit. In this respect, it performs rather well. You’ll hear barely any wind and tyre noise at speed and it comes with plenty of driver assistance systems to help long drives feel like a trip to the shops. You get adaptive cruise control, lane-keeping assistance, automatic headlights and automatic emergency braking as standard. The latter can even spot pedestrians and cyclists and will automatically perform an emergency stop in reverse to stop you bumping into a car behind when backing out of a parking space.

These features helped the Lexus ES earn a five-star Euro NCAP rating in 2018, making it one of the safest large saloon cars on sale. 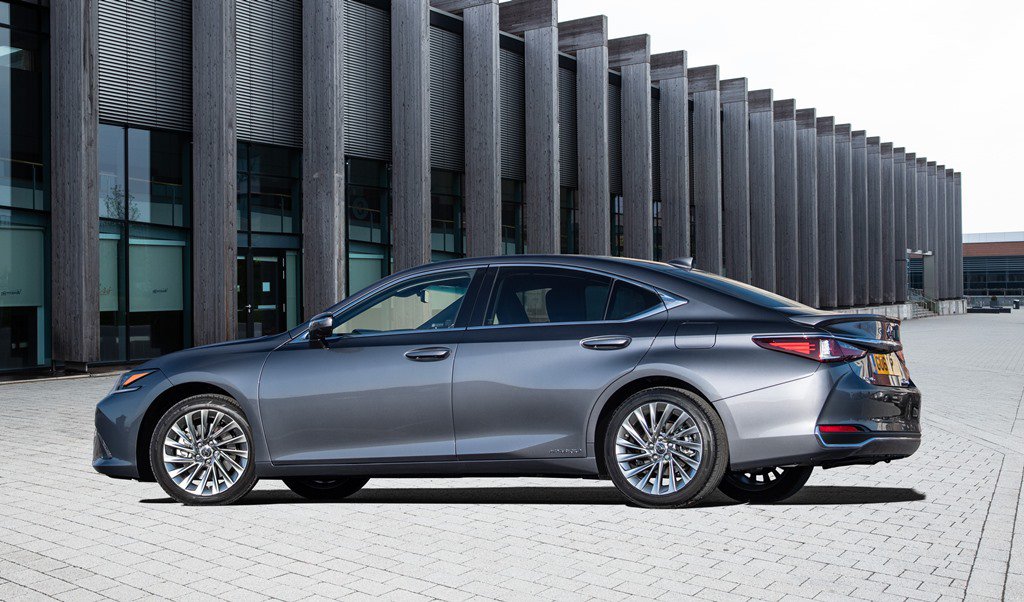 The Lexus ES is something a little different to the Audi, BMW and Mercedes models most executive car customers drive. It majors on comfort, refinement, quality and equipment and it makes a very sound financial case for itself as well. It’s not the most enthralling car you’ll ever drive and folding rear seatbacks could make it a lot more practical, but it’s a very credible alternative to the established elite.