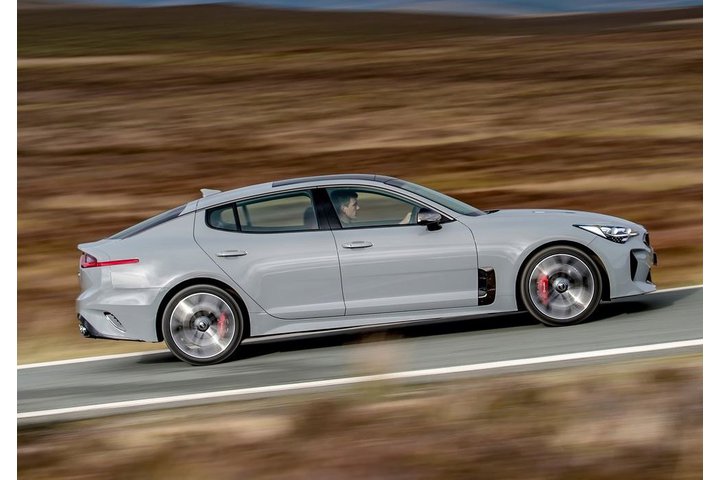 As flagship models go, the four-door KIA Stinger is the South Korean manufacturer’s response to class-leading German rivals such as the Audi A5 Sportback, BMW 4 Series Gran Coupé and the Volkswagen Arteon.

Created as a premium gran turismo at KIA’s Frankfurt studios under the watchful eye of KIA’s chief designer Peter Schreyer (yes, Mr Audi TT himself), the Stinger also boasts substantial sporty intentions thanks to all-new underpinnings shared with Hyundai’s Genesis and a limited but powerful range of engines, all of which vaunt impressive performance figures.

From KIA’s point of view, the Stinger exists to change attitudes, make a statement and offer up a comparison with more premium brands – a halo car for KIA to help raise perceptions of the brand, just as the Genesis intended to do for sister company Hyundai, but is no longer available to order.

With its striking, coupé-like looks and halo model status, the imposing KIA Stinger is an intriguing prospect, but does it have genuine substance and gravitas to compete with the best that it’s established high-end rivals have to offer? 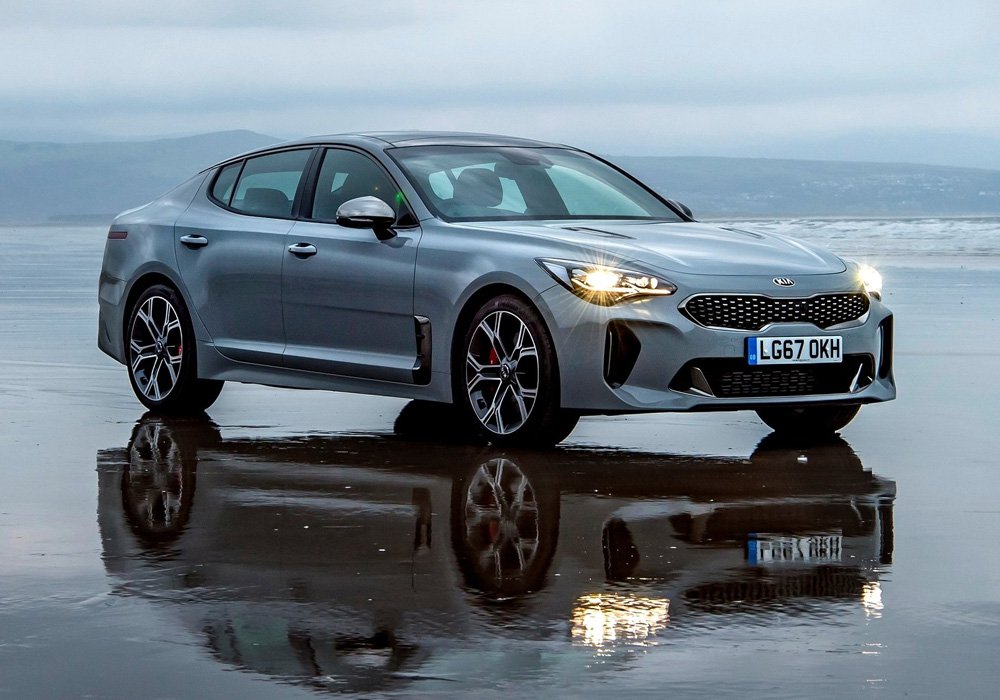 In terms of looks, the stirring KIA Stinger is pretty much bang on and could well have the jump on those aforementioned German rivals. Its long, low bonnet and elongated profile extends the entire length of the car, through its Picanto-bearing hips around to the rear where twin dual exhaust pipes hint at the stonking performance of the Stinger GT S.

The car is at its most aggressive and striking when viewed from the front and the brand describes the car as the most eagerly-awaited model in its history and is undeniably the most noticeable and impactful model the Korean firm has ever put into production. However, those ‘air intakes’ on the bonnet look both sad and fake – because they are.

The Stinger is the UK’s first rear-wheel drive KIA and was specifically engineered for UK roads, thanks to a team of Korean engineers ensconced here for several months working to perfect a set-up specifically for the models coming to British shores. 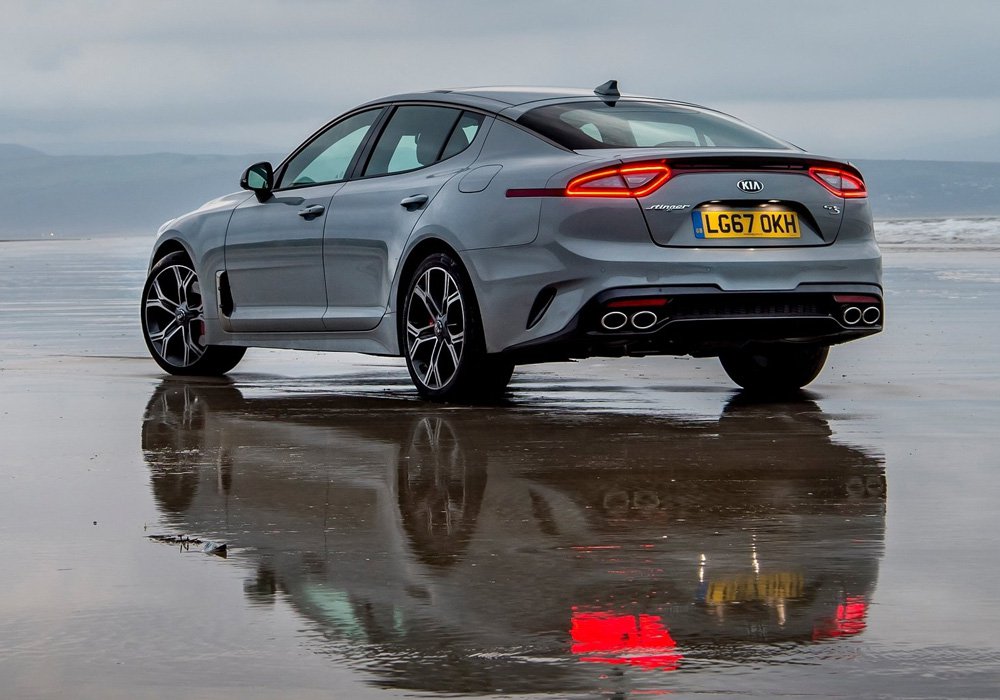 The Stinger’s appeal garnered from the exterior continues on the inside. The aluminium finish on some of the central switchgear adds an elegant touch along with the swathe of leather across the top of the dashboard and the suede-feel roof lining. Soft-touch materials abound in critical touch zones and the super-comfortable, leather clad seating is, frankly, a triumph.

The Stinger’s ergonomics are good, with a well laid-out dash behind a fully adjustable steering wheel. The instruments and multimedia display are clear and easy to read. There’s a dash of style, too, via three turbine-styled Mercedes-looking air vents set below the high-mounted multimedia touchscreen. 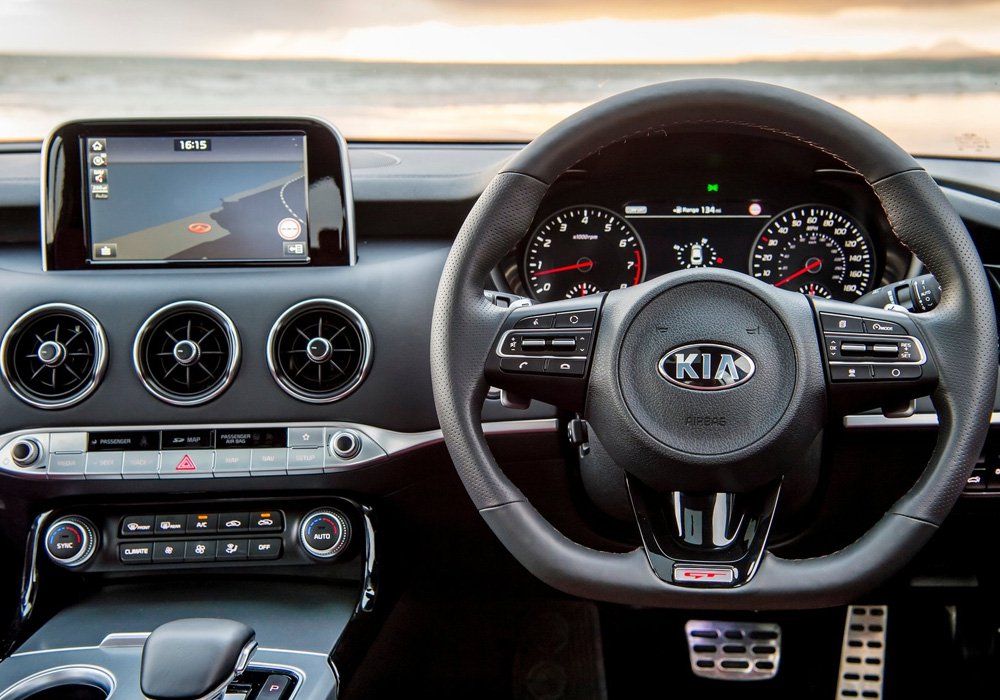 Up front there’s plenty of room and a comfortable (or sporty) driving position is easily found. As a plus, the passenger’s seat includes height adjustment on all variants.

At the back it’s all a little dark and sombre but the seats are nicely shaped and supportive and there’s plenty of knee and leg room, although space for feet under the front seats is tight. The reducing roofline makes getting in and out of the smaller rear doors’ openings less easy than for the front seats.

The boot is sizeable though shallow, but at 406 litres should just about swallow everything required for four adults to get away for the weekend. 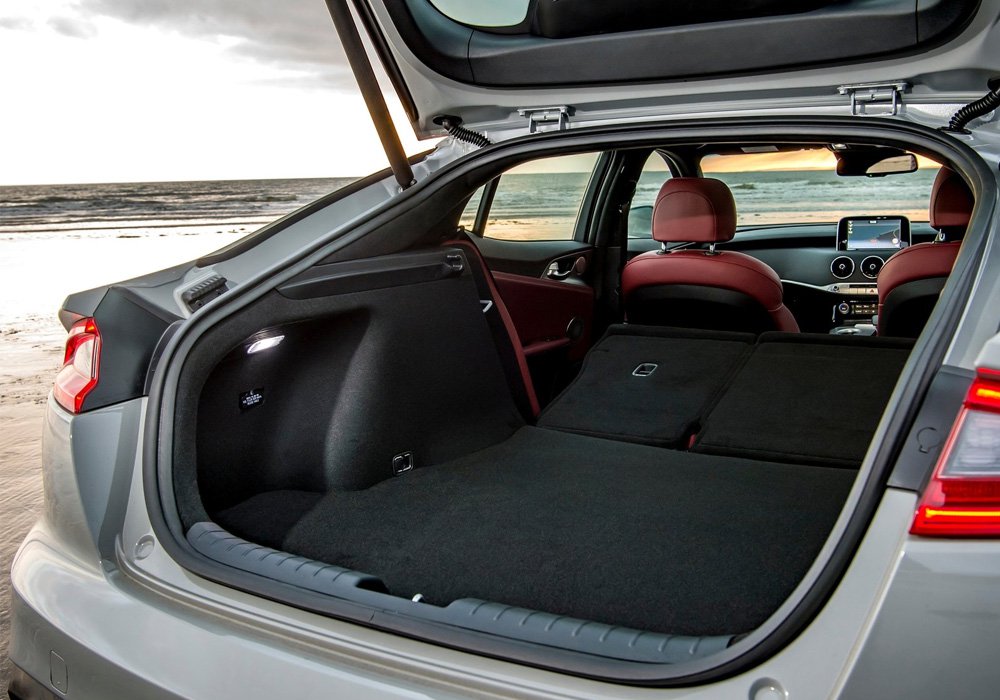 There is a trilogy of trim grades available on the KIA Stinger: GT-Line, GT-Line S and the GT S as tested. 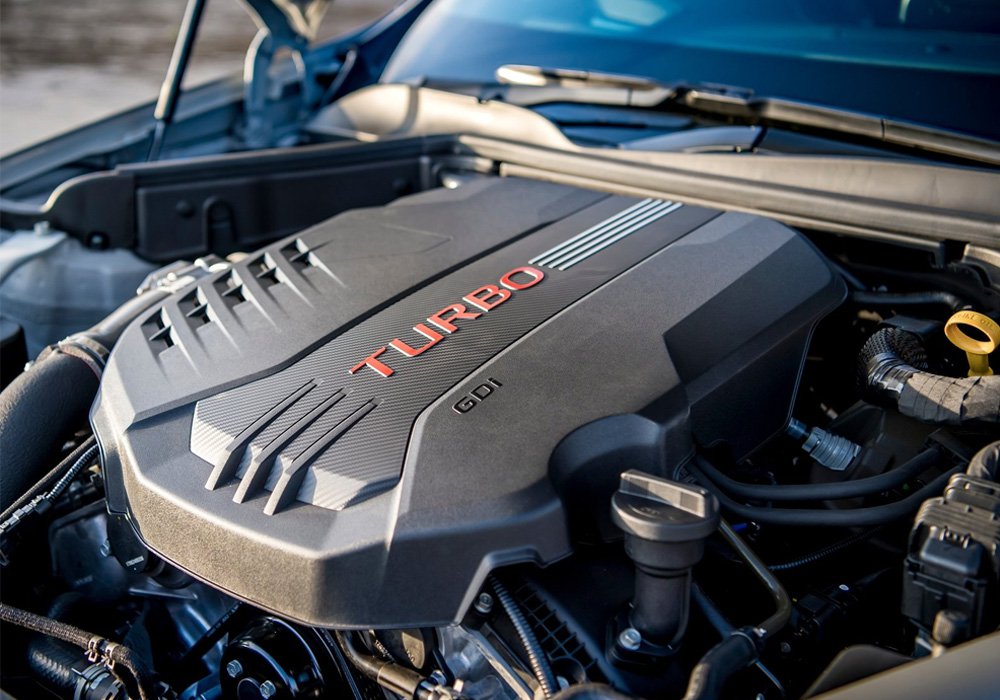 Buyers may be put off by the lack of an all-wheel drive Stinger, something the KIA’s rivals offer either as standard or at least an option. There is currently no manual transmission available on the KIA Stinger as all engines are mated to an 8-speed automatic gearbox which can be left to its own devices or manipulated via flappy paddles.

There are three turbocharged engines from which to choose, depending on your daily lifestyle, two petrols and one diesel. First, let’s run through the two ‘other’ Stingers before we get to the really interesting one – the GT S 3.3-litre bi-turbo V6.

For those that travel upwards of 12,000 to 15,000 miles a year, KIA’s trusty 2.2-litre turbocharged CRDi diesel is the most economical and practical choice, offering 197hp (at 3,800rpm) and 440Nm of torque from a lowly 1,750rpm and returning around 48mpg on an official combined cycle, which is off the pace for the class. However, this oil-burner is an ageing, chatty and unrefined unit more suited to KIA’s rugged SUV range than in the Stinger. If you drive that many miles on an annual basis and have to have a diesel because your boss says you must, there are better and less pricey mile-munchers available, such as the brand’s Optima sedan or estate.

The first petrol engine, a 2.0-litre turbocharged unit delivers an entertaining 244hp/353Nm and returns an official combined cycle of a little under 36mpg. I spent some time in a Stinger with this engine recently and was pleasantly surprised by its smooth, quiet and refined character which didn’t seem at all phased by the Stinger’s curb weight of almost 1,700kg. Lighter up front that the 3.3-litre V6 Stinger GT S, it rode more deftly and was much keener to turn in – and stay turned in. It’s a bit thirsty though as it returned just 28.8mpg over 121 mixed miles in mixed traffic conditions.

Last but by no means least, it’s the 3.3-litre, twin-turbo V6 GT S that really highlights the Stinger’s much-hyped engineering success, looking down its nose at the likes of BMW and Audi with a genuinely entertaining chassis. It’ll top out at 167mph and dead-sprint to 60mph in just 4.7 seconds. All good stuff but first, you’ll need to choose a drive mode in which to fully enjoy the car’s potential… 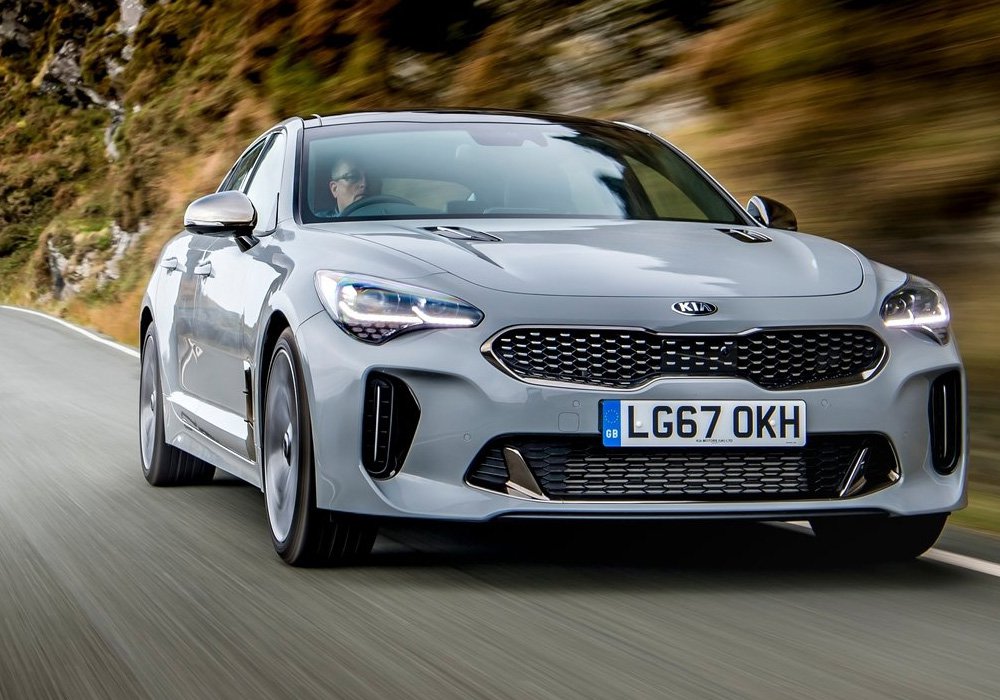 KIA is rather proud of its five drive mode options that control the Stinger’s steering, ride and engine response, but the fact is there’s not a great deal of difference between them…well two of them at least.

There’s ‘Comfort’, which is best suited for normal, everyday driving but particularly useful in a city or urban environment as none of its steering, ride or engine responses is at all interesting.

‘Eco’ mode numbs all three dynamics in an effort to save fuel, but it feels like driving a pre-millennial Honda Accord, so it’s best to use ‘Eco’ sparingly to minimise those unwelcome flashbacks. ‘Smart’ apparently learns your driving style and adapts to it, but like a mood lamp, its effects are just too subtle. 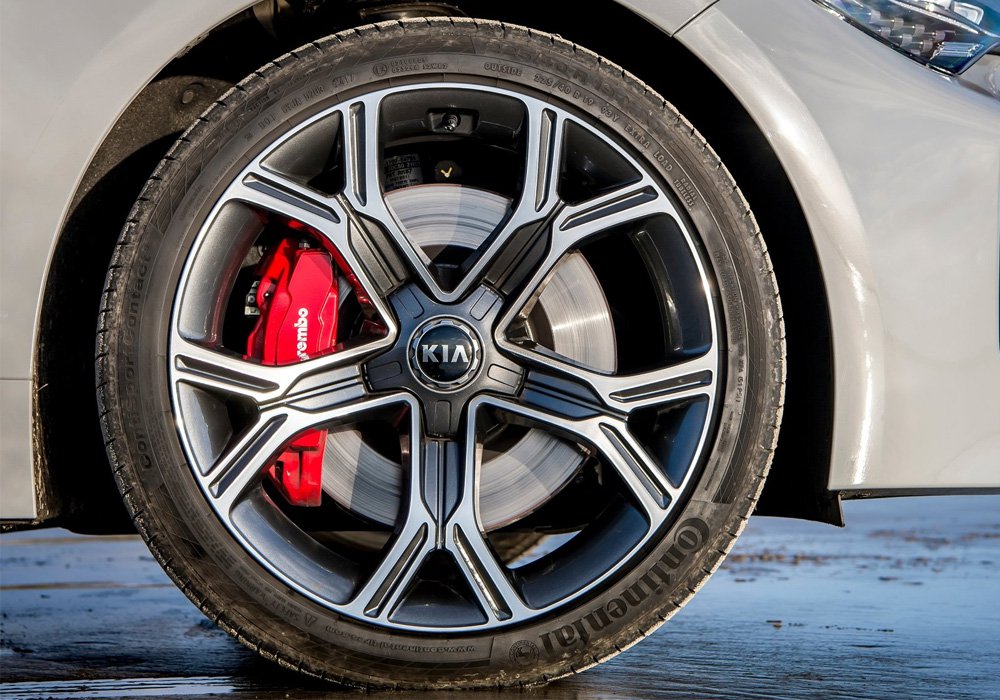 If you have an enthusiastic driving style – and you should if you’re considering a KIA Stinger GT S – you might as well twist the knob towards ‘Sport’ and leave it there. It activates (oddly enjoyable) fake engine noise piped in to the cabin via the audio system, stiffer suspension, sharper throttle response and slightly heavier steering. ‘Sport Plus’ keeps all of that on but switches the traction control off…such fun in the right hands.

Sport is probably the default, daily-drive setting as the Stinger is full of surprises and most of them are of the pleasant variety, the least of which is getting the tail out on a regular basis due to the overly lenient traction control system.

Flooring the throttle too quickly (even in ‘Eco’ mode) will loosen the rear tyres’ grip, but the Stinger impresses with the way it delivers its 365hp through its eight-speed auto ‘box. It’s progressive, not brutally neck-snapping and is all the better for it. But you do need to have your wits about you as the rear will step out when you least expect it. 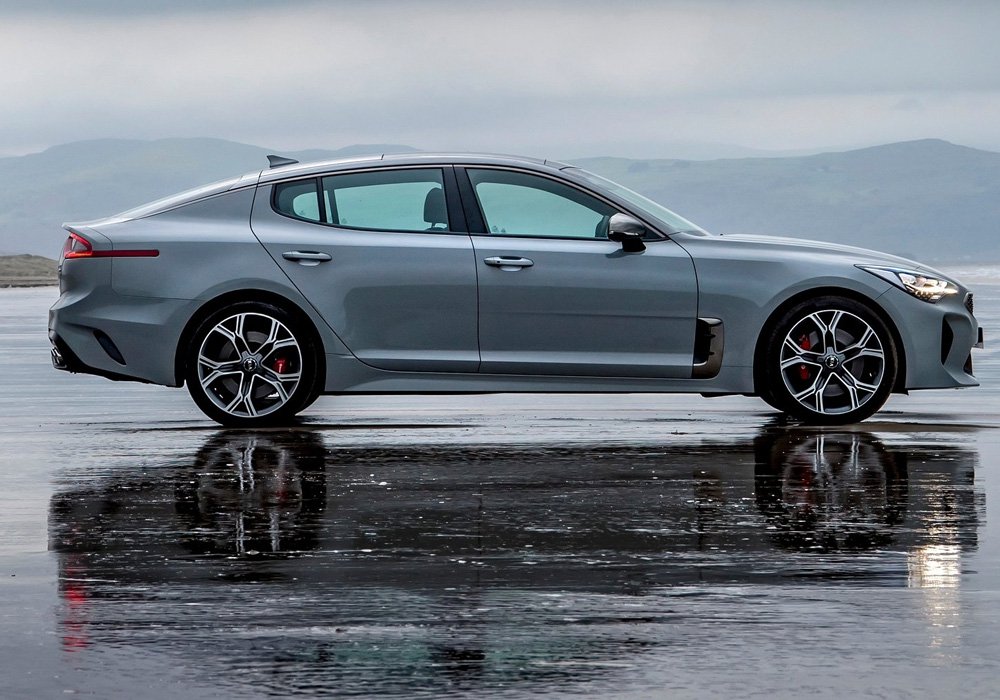 The chassis setup on the Stinger GT S is excellent. It’s supple enough to smooth out the worst of the UK’s roads, with only the odd noisy clunk when traversing harsh potholes or expansion joints taken at high speed.

Refinement of the V6 is exceptional too, with very little vibration through the controls and minimal wind and engine noise on the motorway. There were a few creaks, groans and rattles on the test car which began to irritate as the week went on, mostly to do with an ill-padded rear parcel shelf, driver’s window seals and some vibrating trim that I failed to find, let alone suppress. 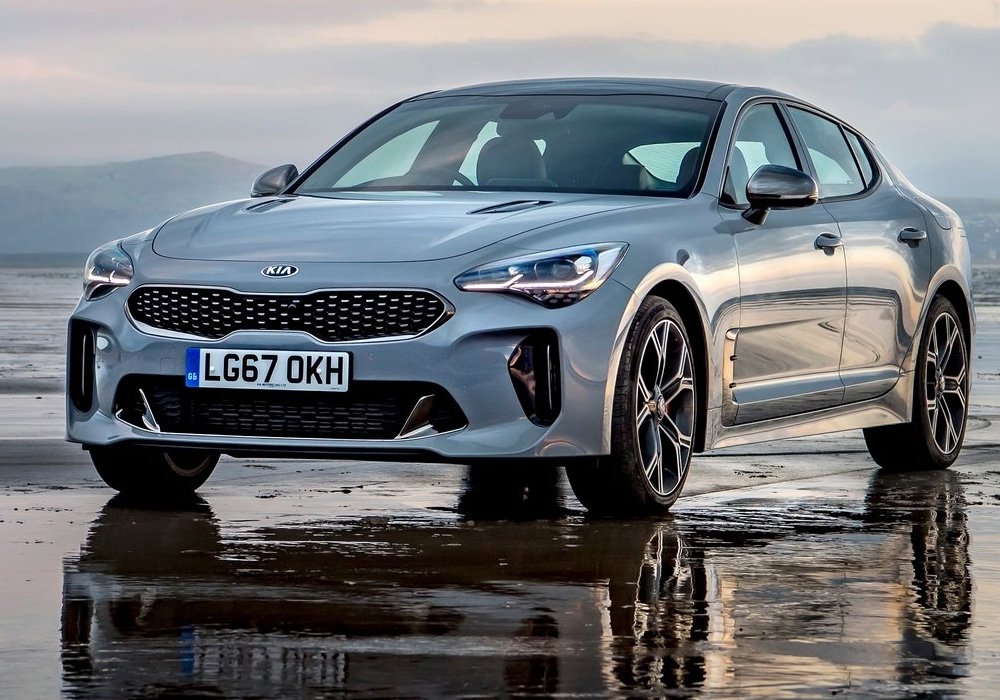 The GT S also gets different steering to the rest of the Stinger range, with a variable ratio rack that means you can swing into tight corners with less steering input. While not the most tactile of setups, it does make the KIA easier to precisely place on the road, being good enough to satisfy during the occasional B-road attack.

Find some well-knitted corners and you’ll discover there’s a pleasant, easy-going balance to the chassis, which manages the critical trick of hiding its weight without detaching you from what’s going on at the wheels. It floats a little if you’re bounding over crests, but the suspension tidies up the movements professionally and there’s less body roll than you’d expect for such a sizeable sedan. 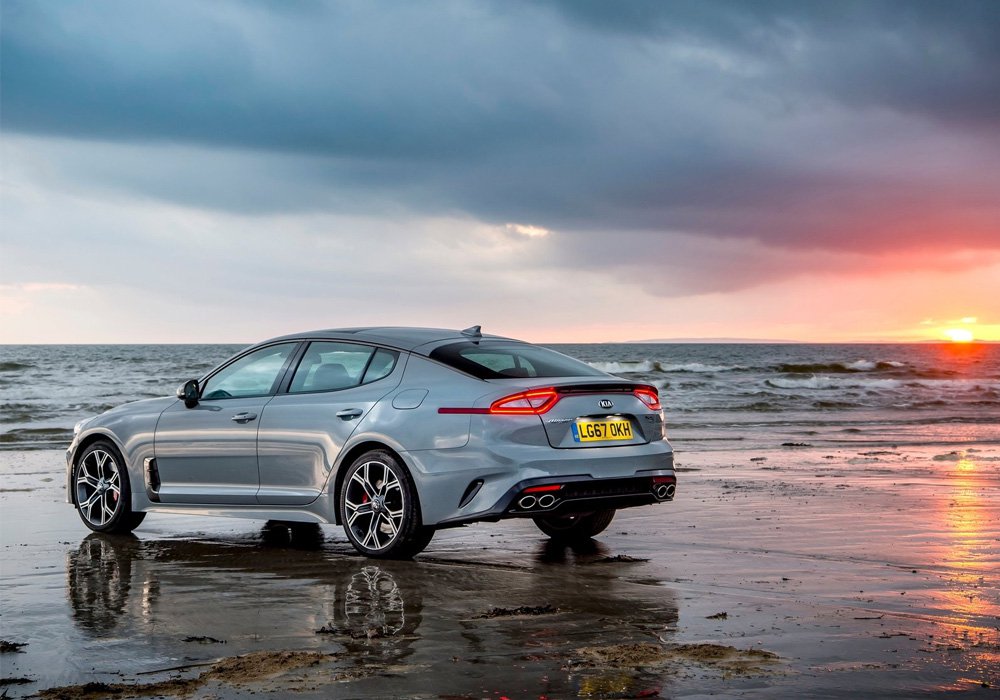 The KIA Stinger GT S is not a hard-edged sports car, created to be brutally fast at the expense of comfort. As a genuine grand tourer, the Stinger is more about the joy of the journey, where driving to a destination is only half of the fun.

The Stinger is a stylish and very well-equipped four-door grand tourer with a sleek, fastback roofline. It comes with a choice of powerful if not overly efficient engines and has a sophisticated and spacious cabin that’s comfortable for long-distance cruising.

Human nature being what it is, it’s hard not to be a little skeptical about KIA’s chances of really making a dent in the premium German ranks with the Stinger, but it’s certainly worthy of a decent shot.