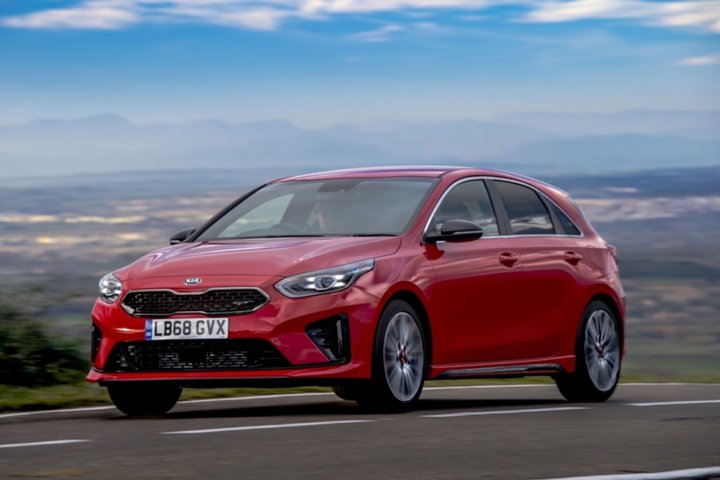 KIA’s first cee’d GT was instrumental in converting the Korean automaker’s perceived brand image through its sporty looks and sharp, smile-a-mile drive. Can the latest Ceed GT do the same?

The launch of the first cee’d GT in 2013 – KIA’s first performance model – helped present the brand in a different light and demonstrated that its cars could entertain keen drivers without sacrificing family hatch practicality. Further KIA models, such as the excellent Stinger saloon, have built on these foundations. 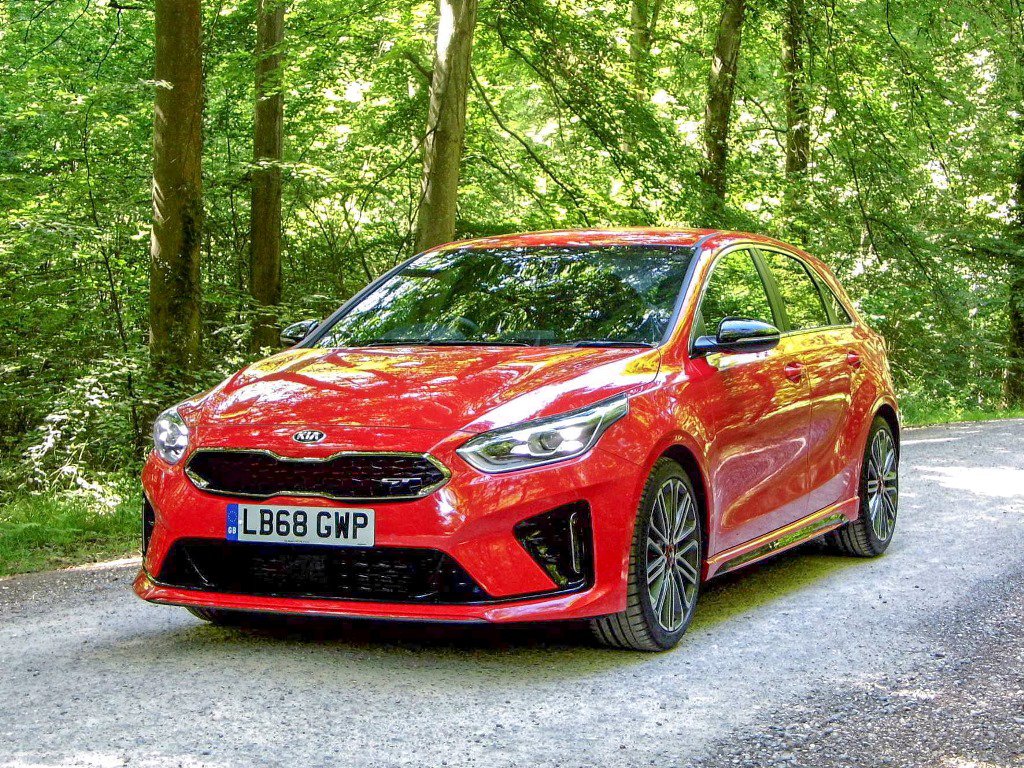 Last August KIA released its all-new, third-generation Ceed family hatchback alongside the Ceed Sportswagon (estate). This summer the Ceed GT arrived in tandem with the stylish ProCeed which has morphed into a low-slung shooting brake body style.

The new Ceed GT is not a full-blown performance model barking up the same tree as the feral Volkswagen Golf R and bonkers Honda Civic Type R, but a 201hp ‘warm’ hatch that offers buyers enjoyable, grin-inducing performance. 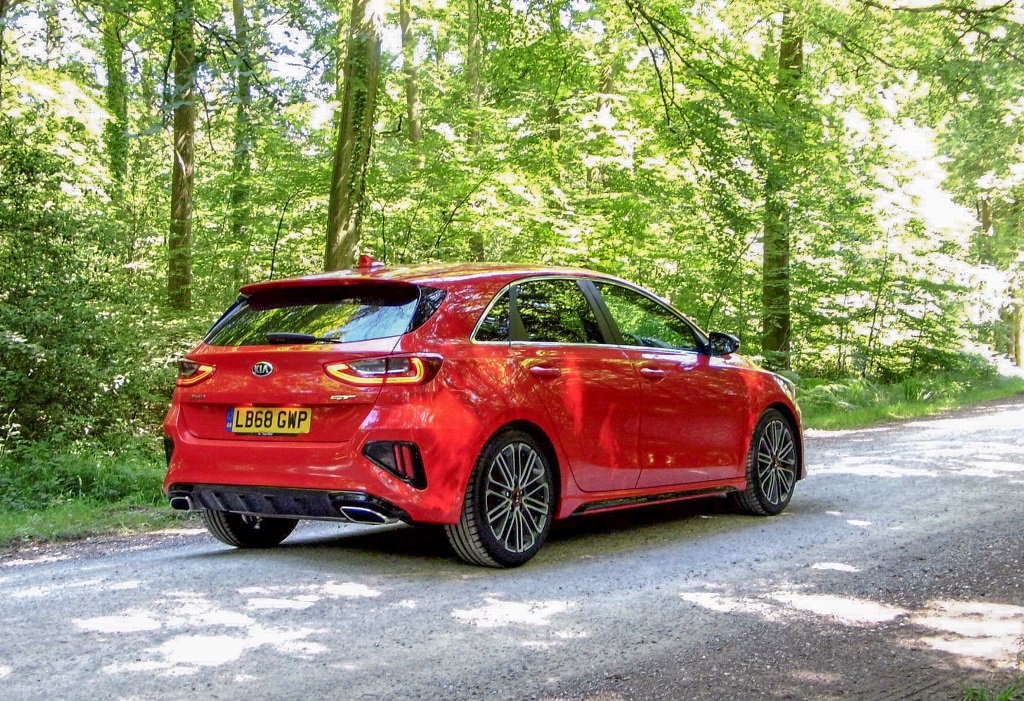 KIA has done a fine job with the styling of the Ceed GT. While it surely features clear sporty cues, the Ceed GT doesn’t go over the top with the styling (Civic Type R) so you won’t feel like a boy racer, yet it successfully manages to distinguish itself from regular Ceed versions.

At the front it features larger air intakes, a revised front bumper and gloss black styling details. It also receives 18-inch alloys, while the back end benefits from a rear splitter and a subtle roof spoiler. 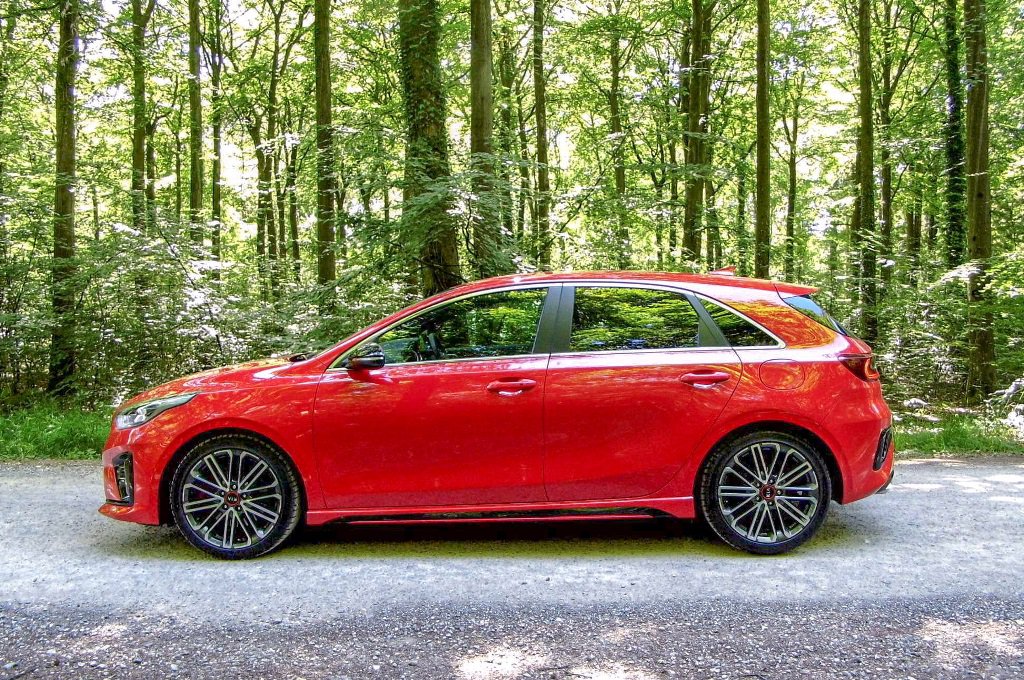 Inside the regular Ceed, high-quality, upscale materials are used throughout. The dashboard is better ergonomically in layout and all the controls fall easy to hand. 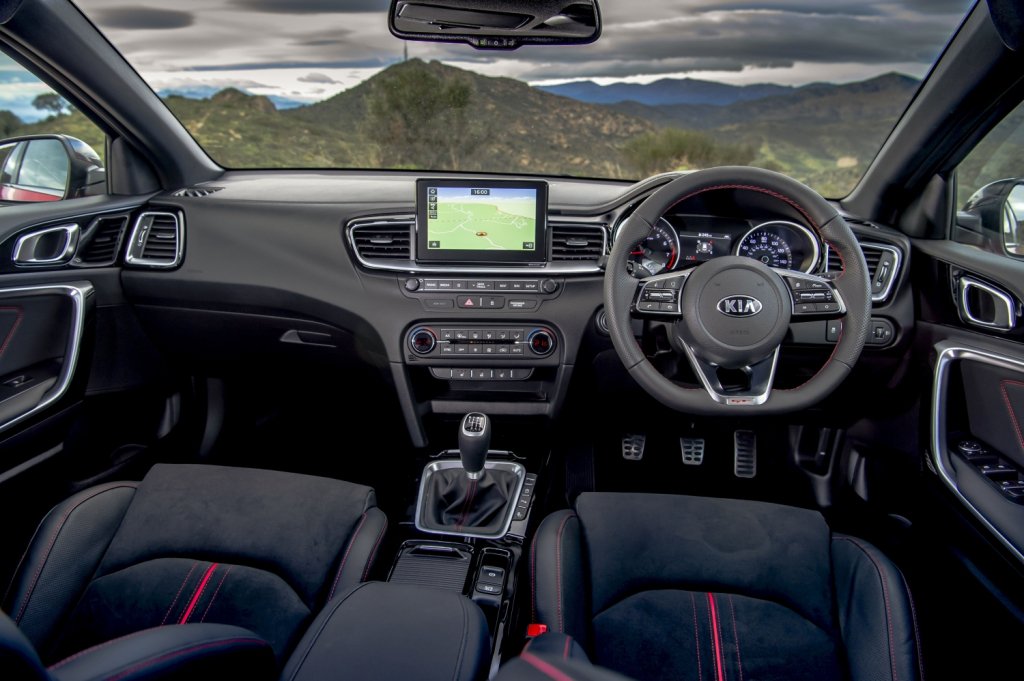 Inside the Ceed GT, the new sports seats are a great addition, with thick bolsters helping you remain fixed in your seat. They are trimmed in a mix of black leather and faux suede and finished off with red stitching. But other than the seats and black headlining, it’s pretty much your regular Ceed interior.

And there’s nothing wrong with that. Modern KIA interiors are superbly ergonomic and also finished in plenty of soft-touch and hard-wearing plastics (in the right places). Add the Ceed’s eight-inch touchscreen, which comes with sat nav, Apple CarPlay and Android Auto smartphone connectivity and there’s very little to grumble about. 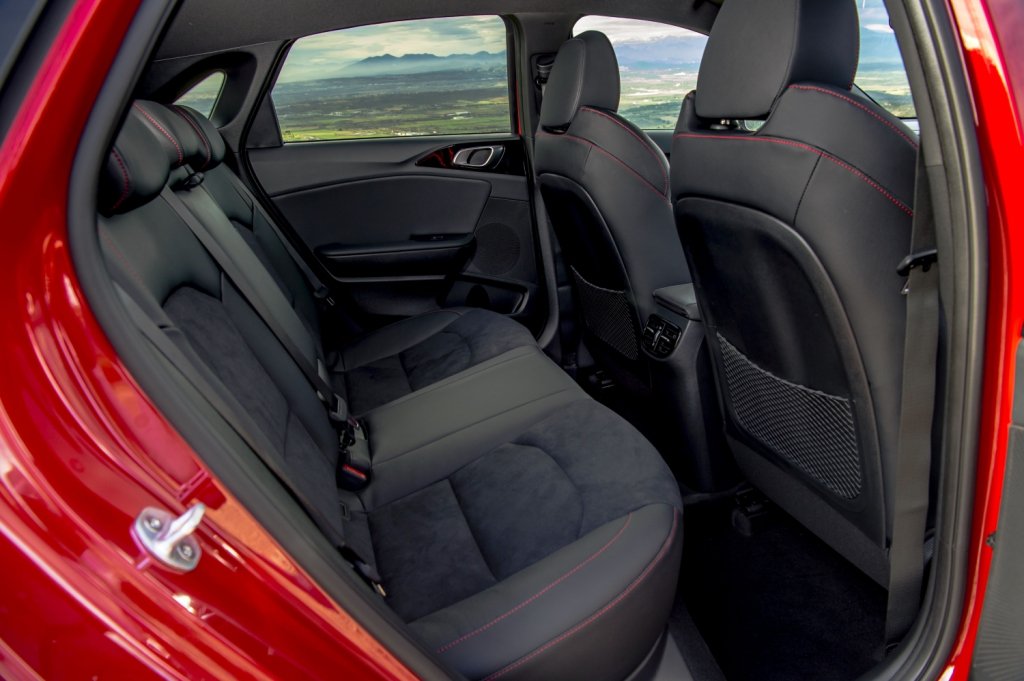 Practicality won’t be a concern, either, with the GT having no compromise on space over the standard Ceed, with plenty of rear-seat space for adults.

The boot space on the Ceed GT remains the same as that on the regular Ceed at 395 litres and is very accessible thanks to a practical low load lip. Folding the 60:40 split rear seatbacks allows up to 1,291 litres of luggage area. 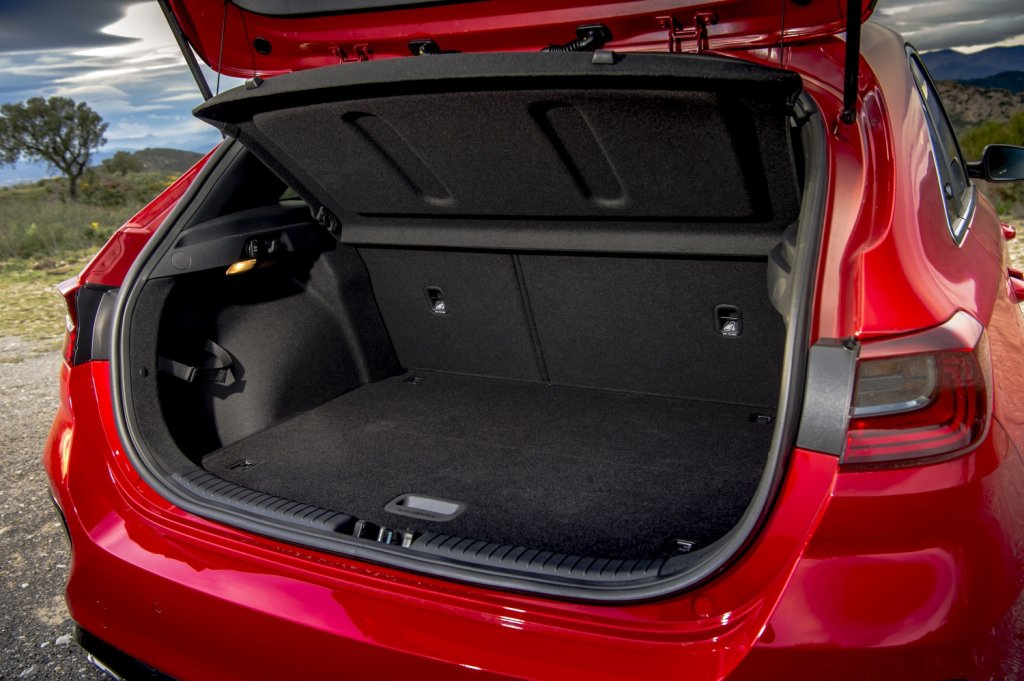 The Ceed GT hatch gets the same 1.6-litre turbocharged petrol engine as the ProCeed GT, but where that model is only offered with an automatic gearbox, the hatch is offered with a six-speed manual instead. Elsewhere, the suspension has been lowered by 5mm and made firmer, and bigger brakes with red calipers have been fitted.

The power plant is willing and free-revving, producing 201hp and 265Nm of torque and makes this KIA’s most powerful hatch to date, with all power sent to the front wheels. Peak torque arrives 250rpm earlier at 1,500rpm and loiters with intent all the way until 4,500rpm. 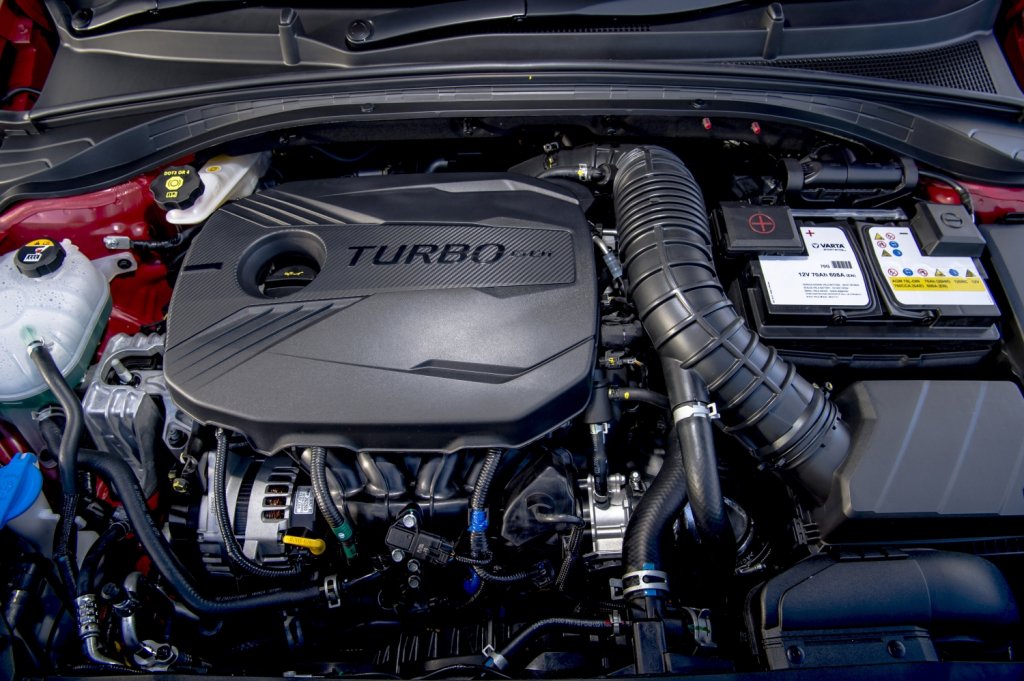 The difference between the sound of the GT and the standard Ceed is marked because the GT’s sport exhaust emits a throaty nuance, even in Normal mode. Select the Sport mode and the exhaust gets surprisingly loud, or at least it does inside the car, where some engine sound is boosted by the car's speakers.

Happily, though, this effect sounds more natural than it does in rivals such as the Peugeot 308 GT, so it doesn’t get on your nerves. Pull away flat out and the car will get from 0-62mph in 7.2 seconds, making it quicker than most family cars, without troubling any of the hot hatch elite. It’s an engine that feels happy to be worked hard.

While the engine and manual transmission are an excellent pairing, the 1.6-litre is still a thirsty beast. KIA claims a fuel economy figure of 41.2mpg, with CO2 emissions of 155g/km. However, if you want to enjoy the Ceed GT as intended, you’ll struggle to see anything higher than 35mpg. 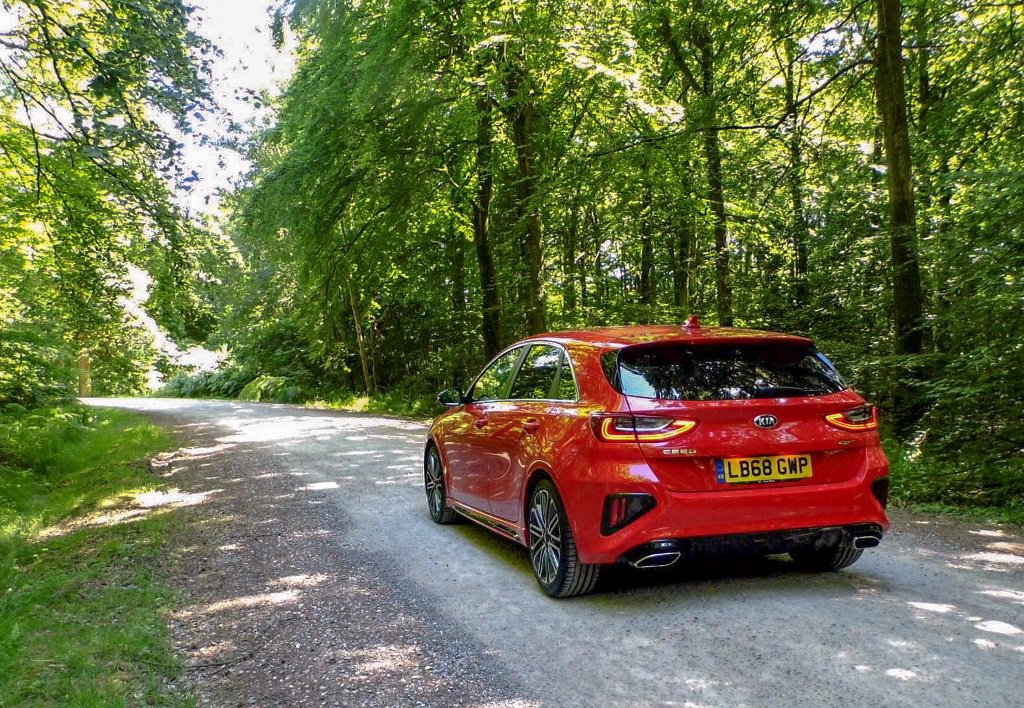 During the test week, we achieved 34.8mpg over 392 mixed miles at an average speed of 31mph. Much less than the claimed figure, but goodness it was fun!

Albert Bierrmann, former head of BMW’s ‘M’ division and now the genius behind Hyundai’s ‘N’ programme, had his team fine-tune the Ceed GT for six months purely for European markets and the differences are clearly tangible. 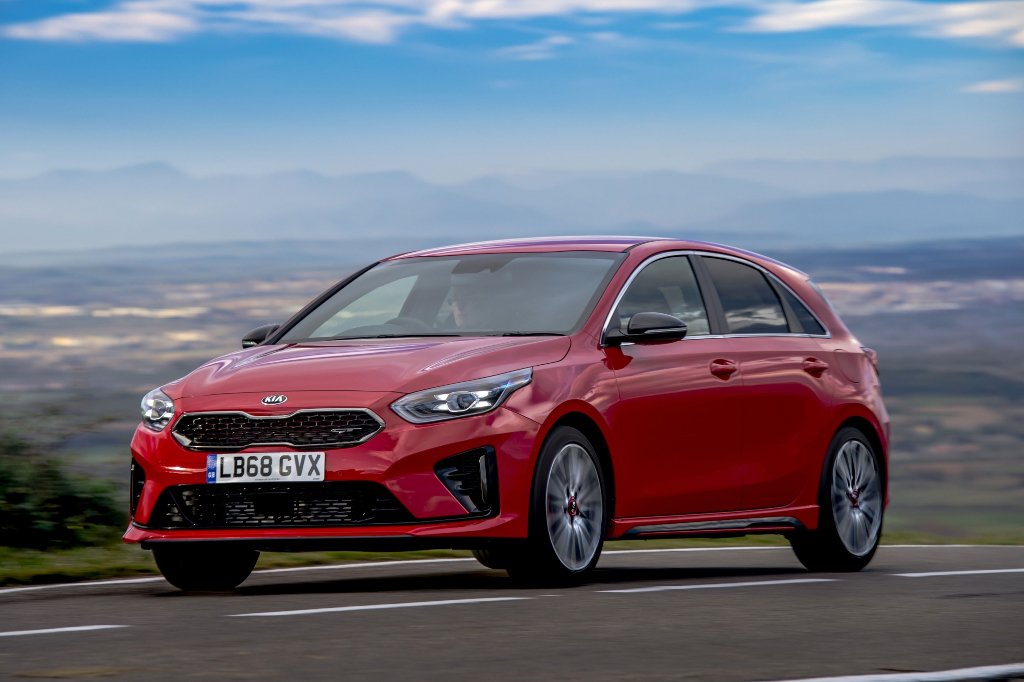 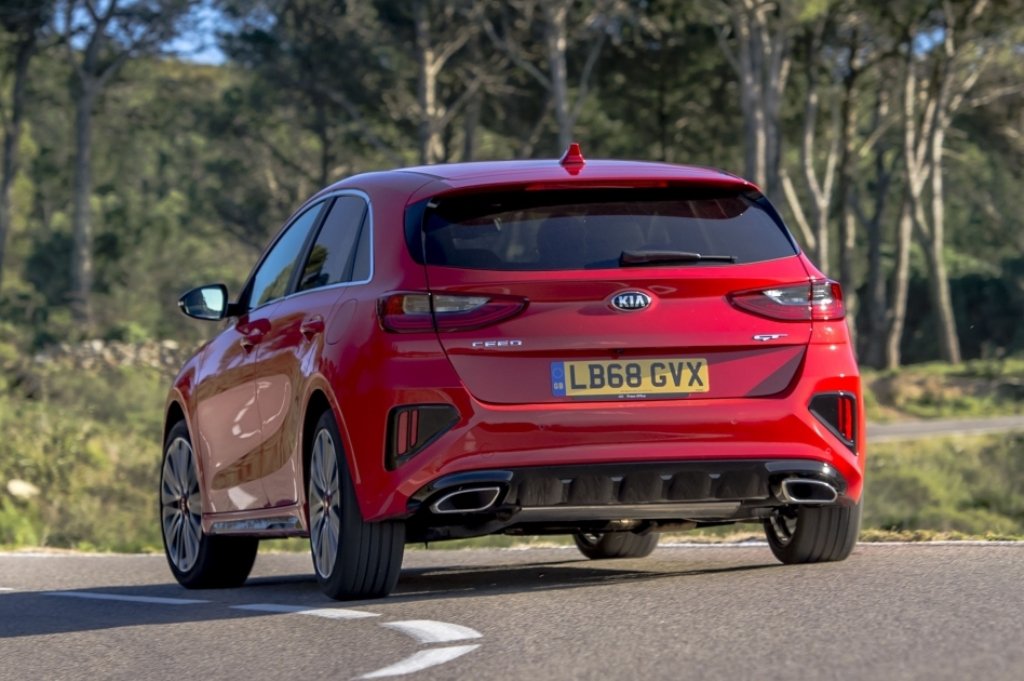 As mentioned, the Ceed GT is more of a warm hatch than a hot one, but it proves that you don’t need loads of power to have fun. The GT’s stiffer front and rear springs, as well as retuned electronic stability control allows the car to be pushed to its limits, but at no time feeling dangerous or unstable.

The ride errs on the firm side but is never harsh or bone jarring – it’s a hatchback that is very easy to live with every day. 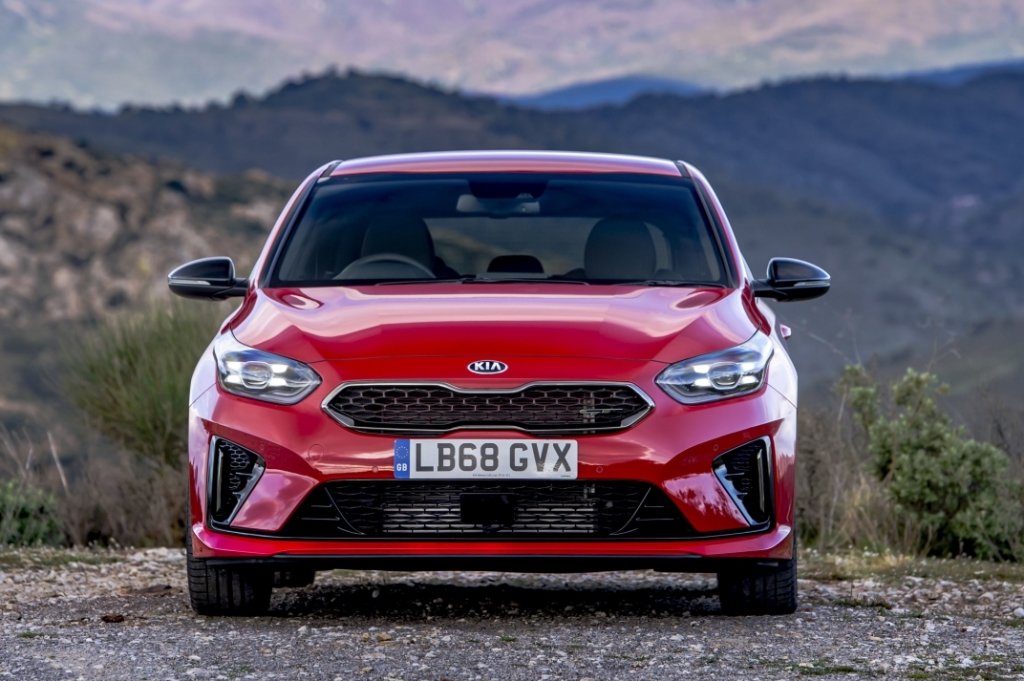 KIA’s second-generation Ceed GT performance hatch is a welcome enhancement over the previous GT. It feels like a far more rounded package – particularly with its excellent chassis and uncompromised practicality.

Those wishing to smash the Nürburgring lap record would be better off looking at other options in the hot hatchback class, but for those wanting a subtle sporting hatch with impressive every day liveability, the KIA Ceed GT holds much appeal.

Browse our top leasing deals on the KIA Ceed range. 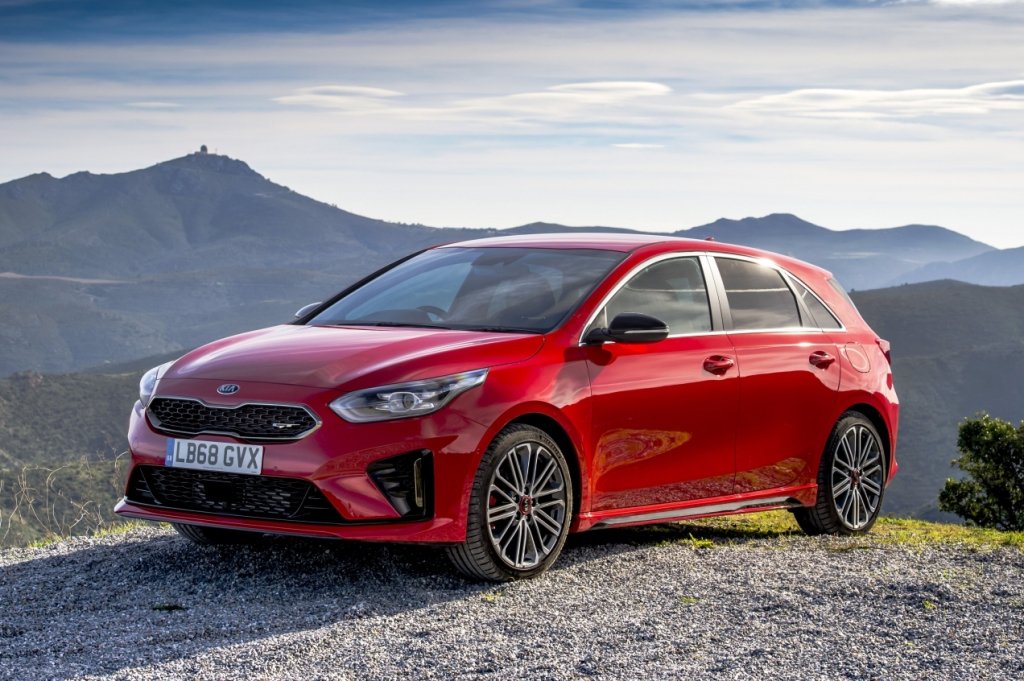