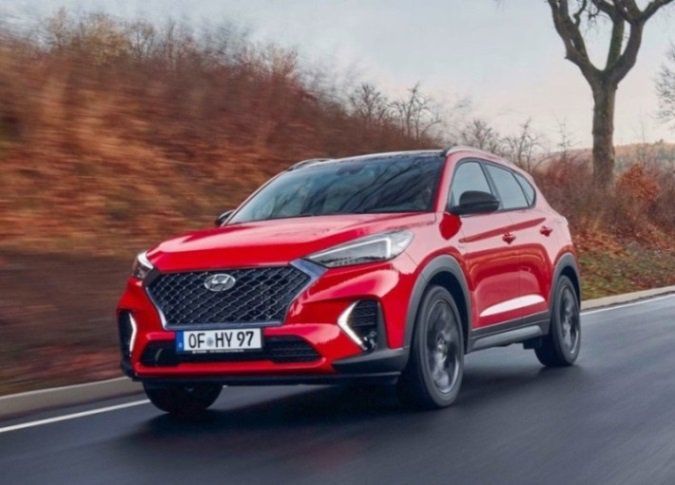 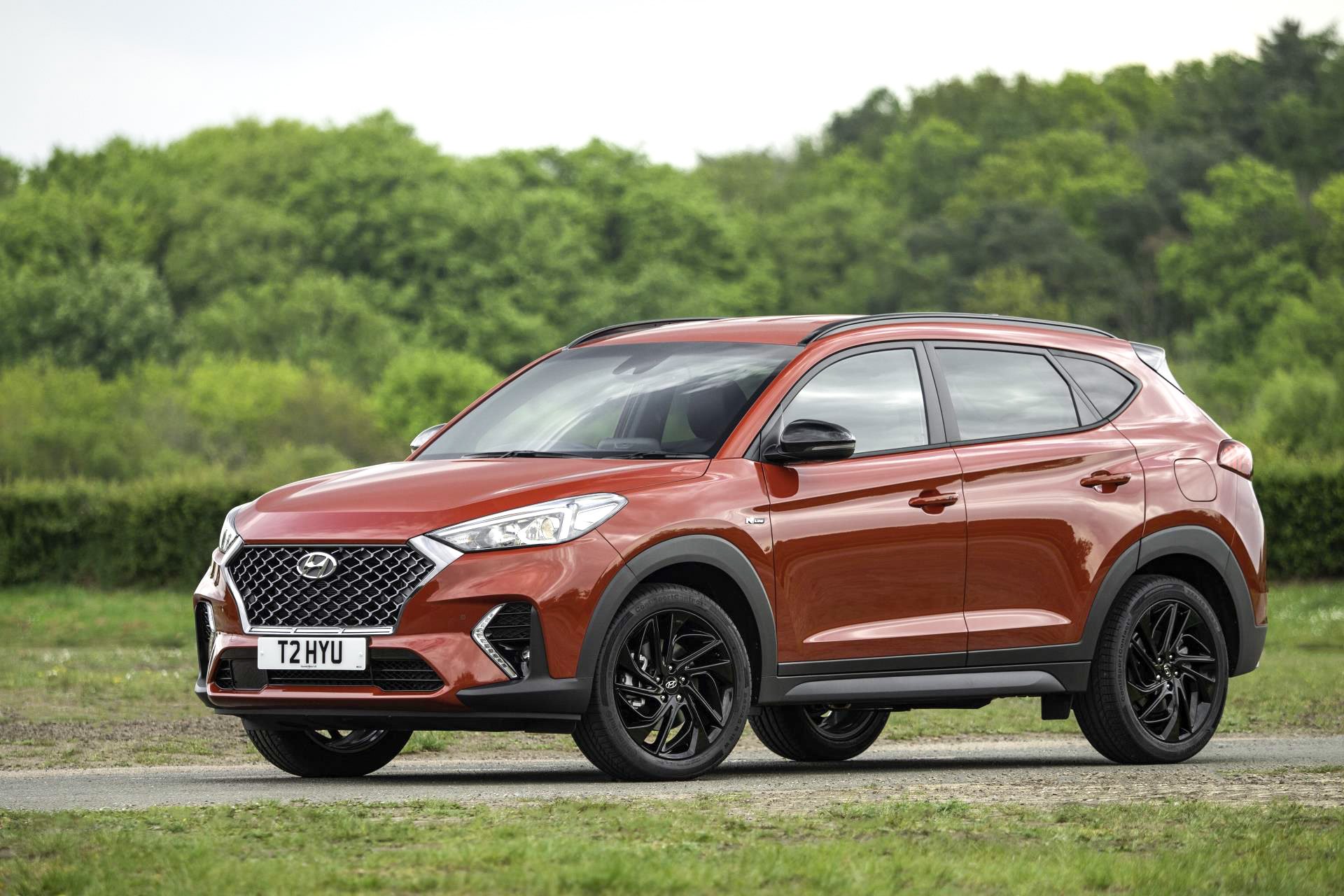 The model’s third iteration arrived in the UK in 2016 and replaced the popular ix35 SUV. It further received an exterior facelift and interior overhaul in 2018. Exterior enhancements included a new cascade grille, headlights and a new tailgate design.

Recently, we spent a brief while in the current Hyundai Tucson presented in its new, mid-range N Line trim grade, which went on sale in May. 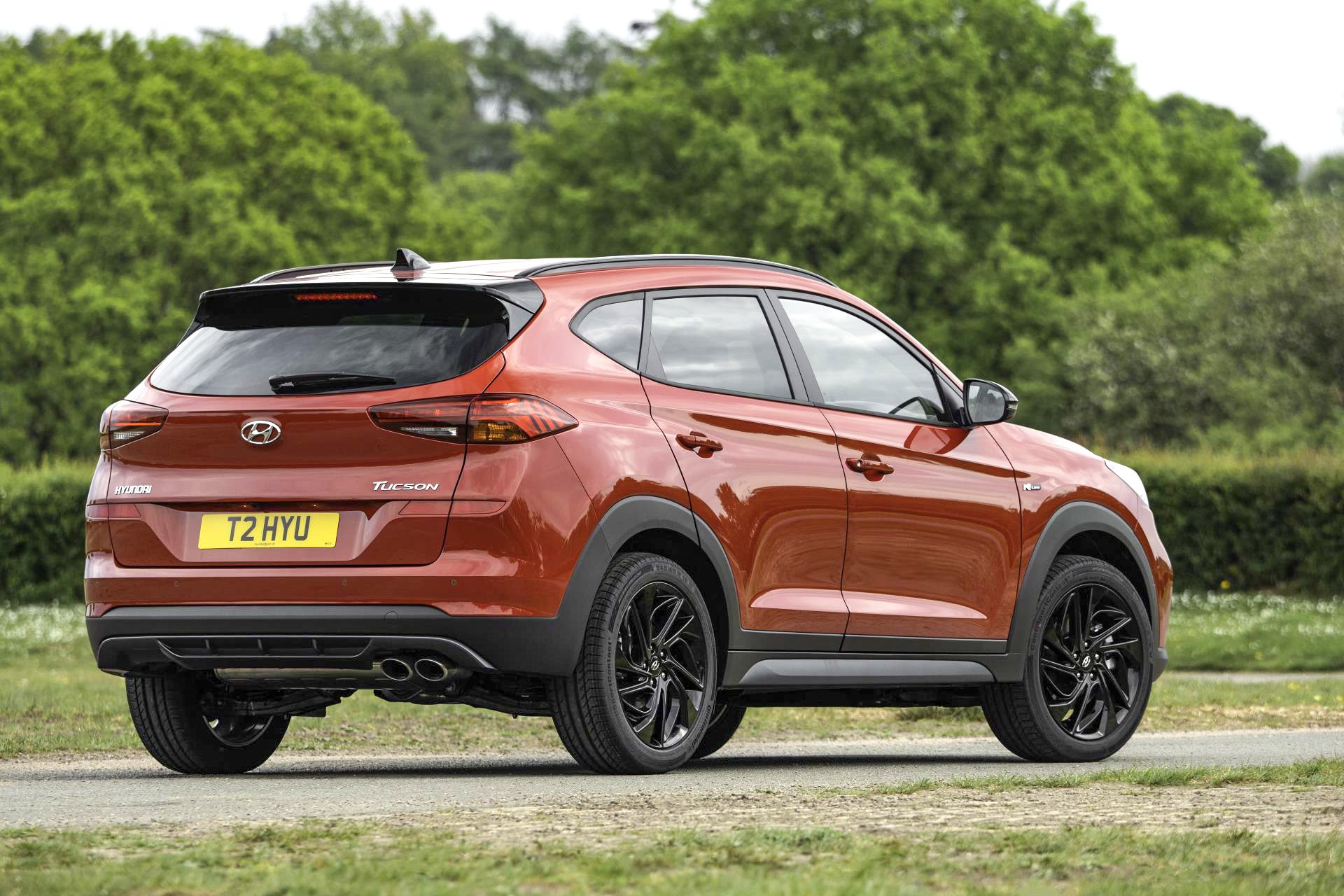 The ‘N Line’ is a little like KIA’s GT Line or Audi's S Line – it's a trim level rather than being a sporty version of the SUV. It may well have the looks, but it won’t have the poke.

In Hyundai’s case, following the popularity of the Hyundai i30 N and N Performance, the company has picked up some styling points to create this new trim level. 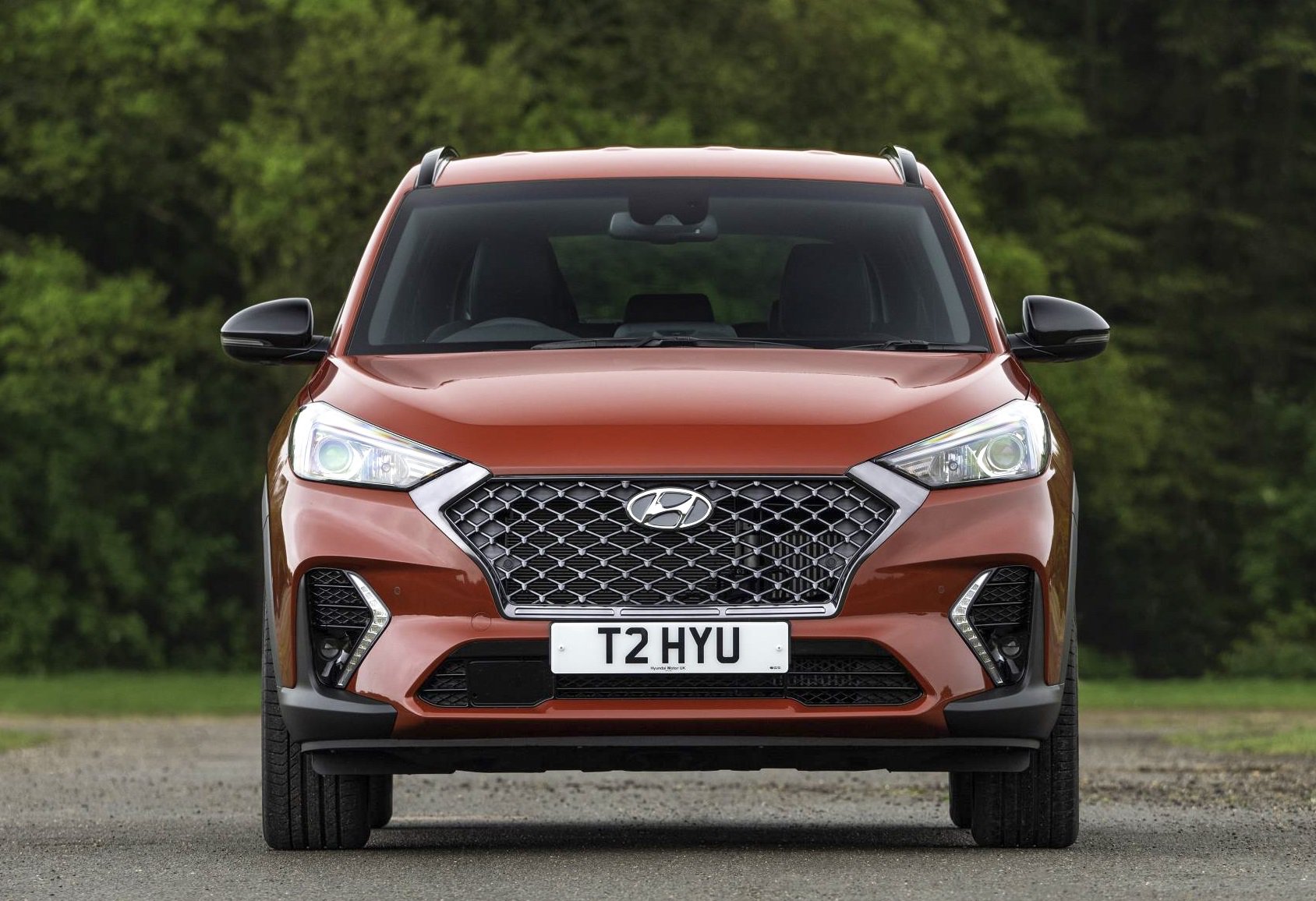 Exterior differences over the ‘regular’ Hyundai Tucson include a smart-looking bumper design which, like its i30 N Line cousin, features little ‘shark tooth’ elements poking up from the front splitter. There’s a grille insert that matches i30 N Line’s smoked metallic design, too, as well as some boomerang-shaped LED daytime running lights. Extra sporting intent is added with a contrasting black finish for the door mirrors, roof, extended rear spoiler and new 19-inch wheels. Inside, there's extra red trim to perk up an otherwise gloomy black cabin. The seats are trimmed in a mix of fake leather and Alcantara-esque materials. Go for a manual gearbox and the gear knob is the same as the one that you get in the i30N hot hatch. Equipment levels give you everything you really need: heated front seats, keyless entry, climate control, front/rear parking sensors and privacy glass are all standard. 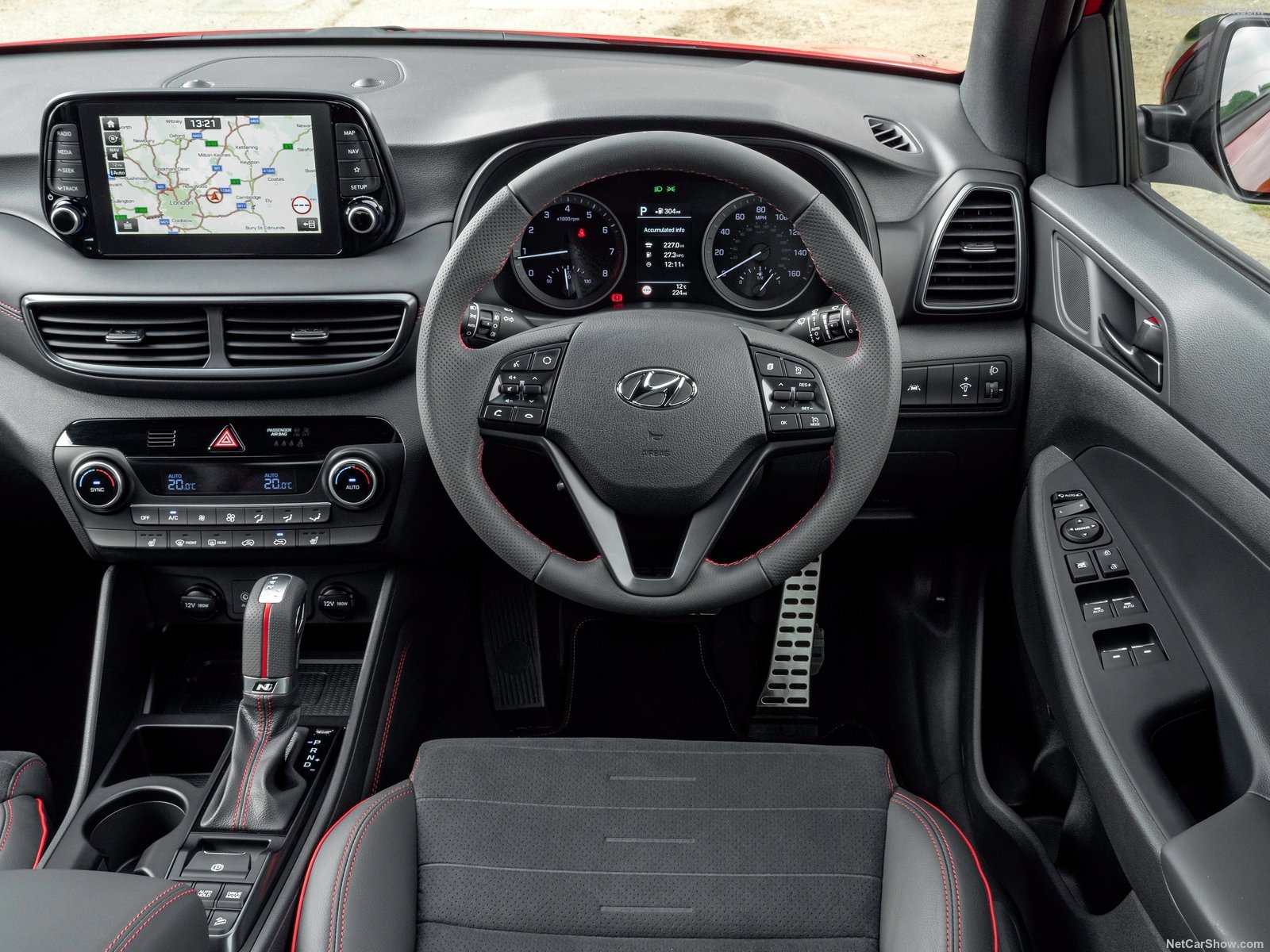 Elsewhere, the interior is the same as in any other Tucson. The dashboard layout is functional rather than particularly interesting, build quality is okay and the eight-inch touchscreen infotainment system is clearly laid out and easy to use – if a little dim-witted to respond to touches. Rear cabin space isn’t the best in the class, and the rear centre seat is firm and too narrow for an adult. 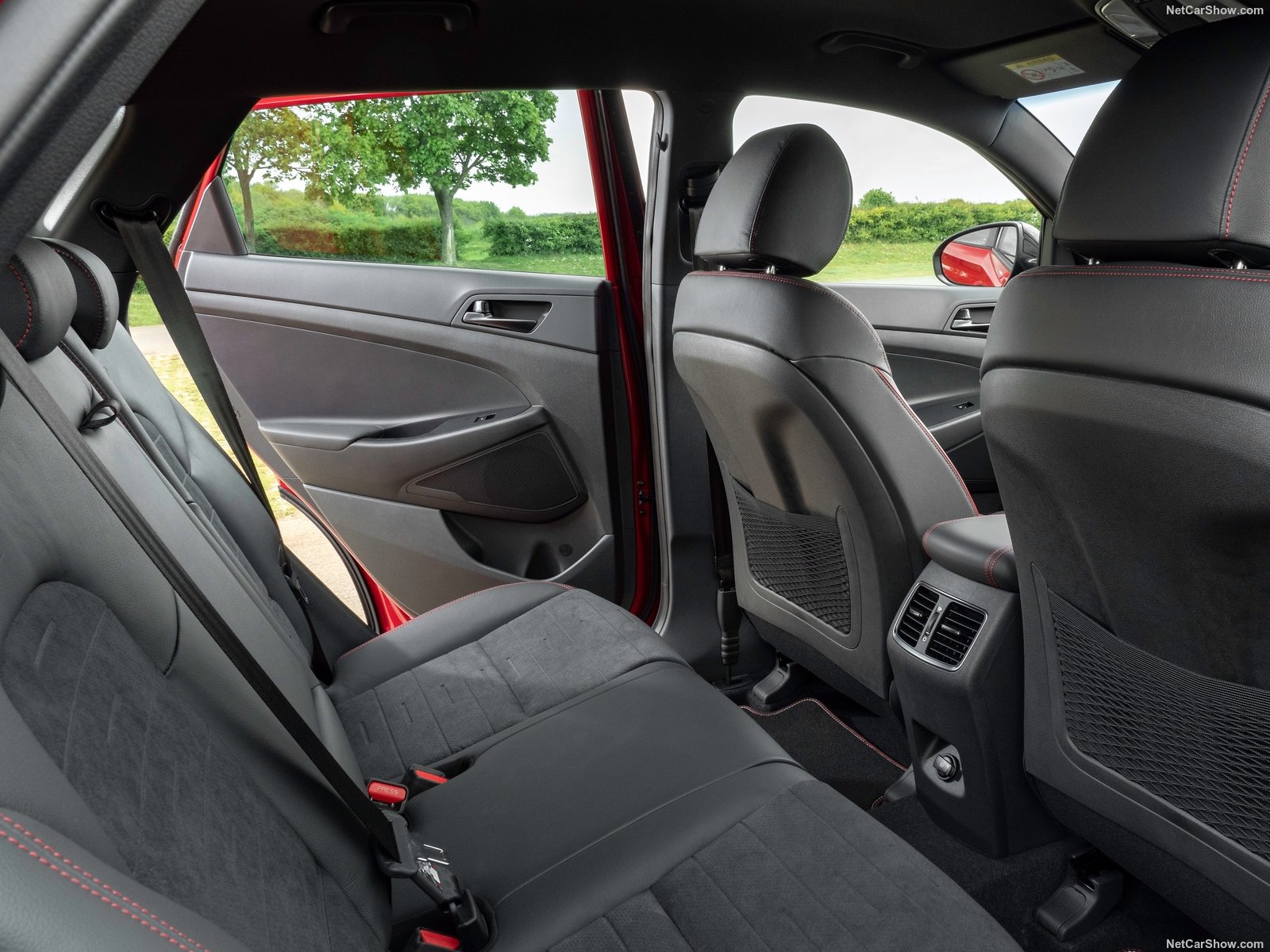 No change here from the regular Tucson, which is very competitive, as it trounces many of the car’s rivals for total volume. You get 513 litres of luggage storage. This can be expanded to 1,503 litres by folding the seats down completely flat. The boot floor can be lowered and the 60:40 split-folding seats can be lowered in a single movement. Safety kit includes auto emergency braking, lane-keeping assistance, speed limit recognition and trailer stabilisation. Seven colours are available but you’ll have to pay extra if you’re taken with any of the five metallic or pearl options. The N Line Tucson is available with a choice of two 1.6 litre engines. The first is a petrol engine producing 175hp that can accelerate from 0-62mph in under 9 seconds when specced with the seven-speed automatic gearbox.

Also available is a 1.6-litre diesel engine with mild hybrid technology. It’s assisted by a 48V electrical system that allows the diesel engine to engage the stop/start system by shutting down the engine during braking helping to increase fuel and emissions efficiency. This is assisted by a new brake regeneration system that can feed the energy recovered into the driven wheels. These additions help reduce carbon emissions by up to 11% according to Hyundai when compared to the standard 1.6-litre diesel engine. As a result, you can expect to achieve up to 50mpg from the diesel in mixed driving, or 36mpg from the petrol.

Both will be offered with either a six-speed manual gearbox or seven-speed dual-clutch automatic gearbox. The regular Tucson offers a quiet and refined drive, with safe handling – it won’t satisfy those with a more enthusiastic driving style, but its light controls make it a doddle to pilot around town, which is great for families who spend most of their time in these situations. While it doesn’t get any more power, the Tucson N Line does feature chassis improvements to improve handling, with slightly firmer dampers and weightier steering. You’ll need to choose the petrol engine to get these enhancements, though, as N Line models with a diesel engine will be set up exactly the same as the standard versions. This car is as good as it needs to be, given that most customers in this segment aren’t overly fussed about a sparkling driving experience. As a rival to the KIA Sportage or the Nissan Qashqai, the Hyundai Tucson N Line has plenty of appeal. It's affordable, is practical and comes with plenty of technology. Engine choices are reduced too, but it still offers the most popular options and is a practical alternative to market leaders.