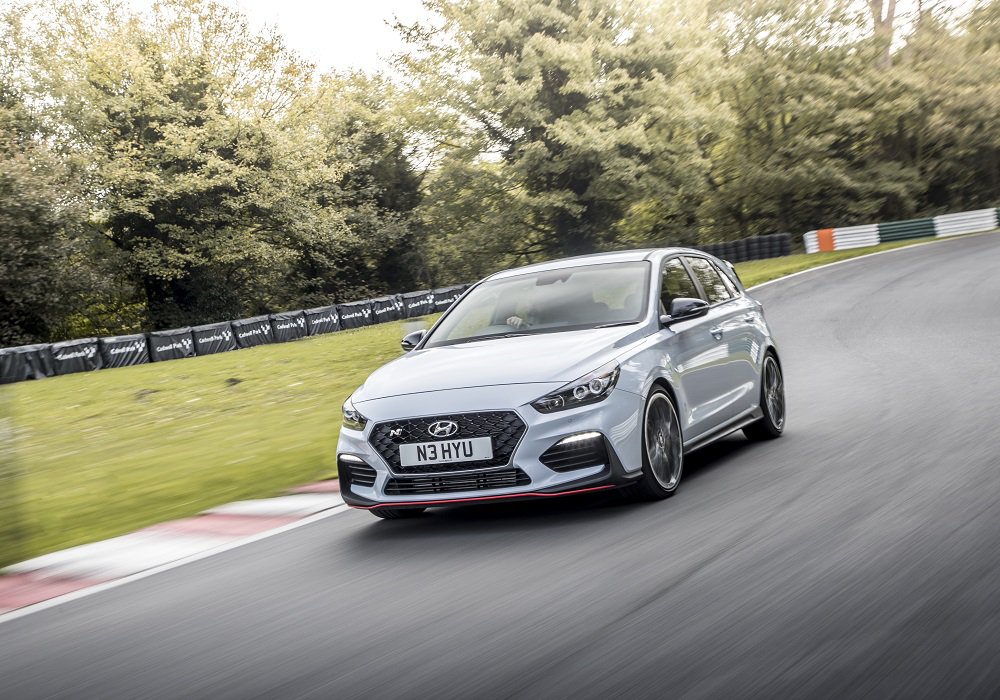 Some of the 100+ cars I drive every year could arguably be described as appliances – simple tools to get from A to B and back again. In a mature market such as ours, the majority of cars are good and several are extraordinarily good. But only a few are so exceptional as to leave a lasting memory. The Hyundai i30N Performance is one such car.

Building on their growing list of World Rally Championship successes and to prove that the company can make properly credible fast cars, Hyundai chose the latest iteration of the i30 four-door family hatchback as the donor car to introduce their high-performance ‘N’ sub-brand to the world. 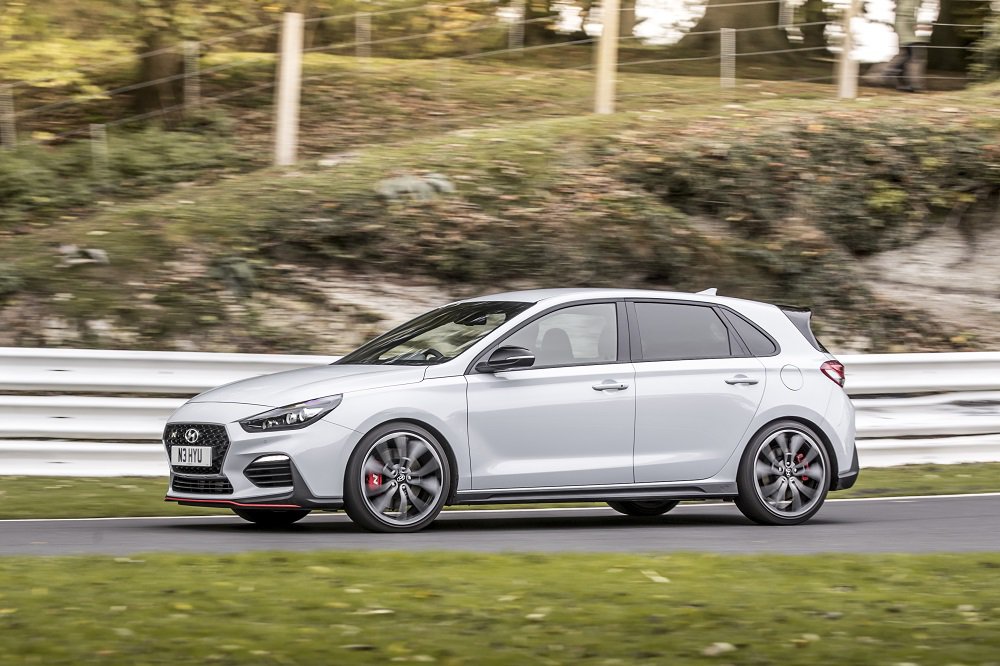 Former BMW M Division boss Albert Biermann was recruited by Hyundai to head up the newly formed division. He and his colleagues rolled up their sleeves and immediately got to work, uprating everything that mattered to create the completed i30N Performance model tested here. The 'N' refers to Hyundai’s global R&D centre in Namyang, Korea and the legendary Nürburgring Nordschleife circuit, where over 6,000 miles of testing and development produced the finished product.

The Hyundai i30N arrives as the latest rival for a long list of well-established players. It directly challenges front-drive performance hatchbacks like the Ford Focus ST, Peugeot 308 GTi, Renault Megane RS and, of yes, even the Volkswagen Golf GTi. 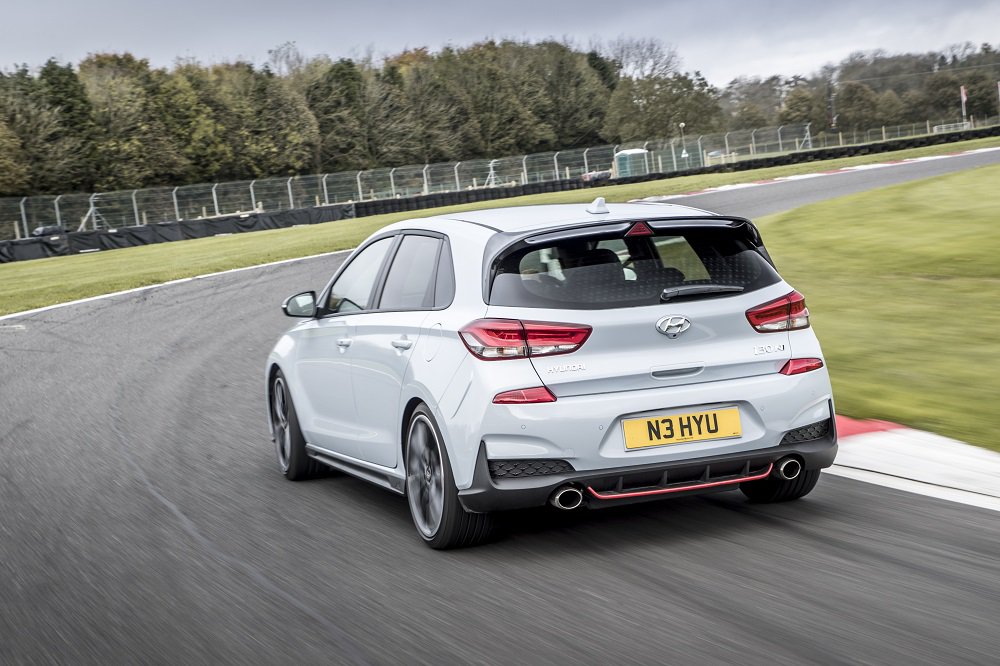 The i30N takes the improved, contemporary styling of the third-generation i30 family hatchback released in early 2017 and enhances it to include aggressive front and rear bumpers with larger air intakes and de rigeur red GTi pinstrips front and rear, aerodynamic rear spoiler with triangular brake light, dual muffler exhaust and sport seats.

The N model wears 18-inch alloys shod with Michelin Pilot SuperSport tyres, while the N Performance car rides on larger 19-inch alloys clad with notably superior Pirelli P Zero’s, the compound of which has been specifically developed for the car. 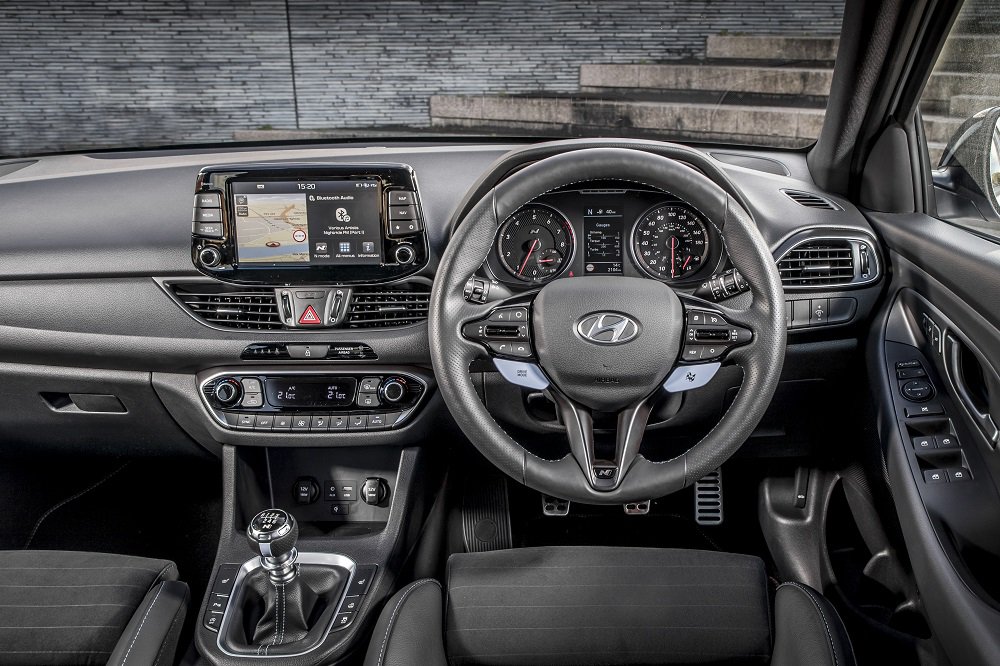 Inside, there’s subtle 'N'-branding on the floor mats, the door sill scuff plates, the steering wheel and on the gear knob. Also on the multifunctional steering wheel are two oversized light blue buttons – the left one for 'Drive Mode' (Eco, Normal and Sport) and the other sporting a chequered flag for N and N-Custom modes. 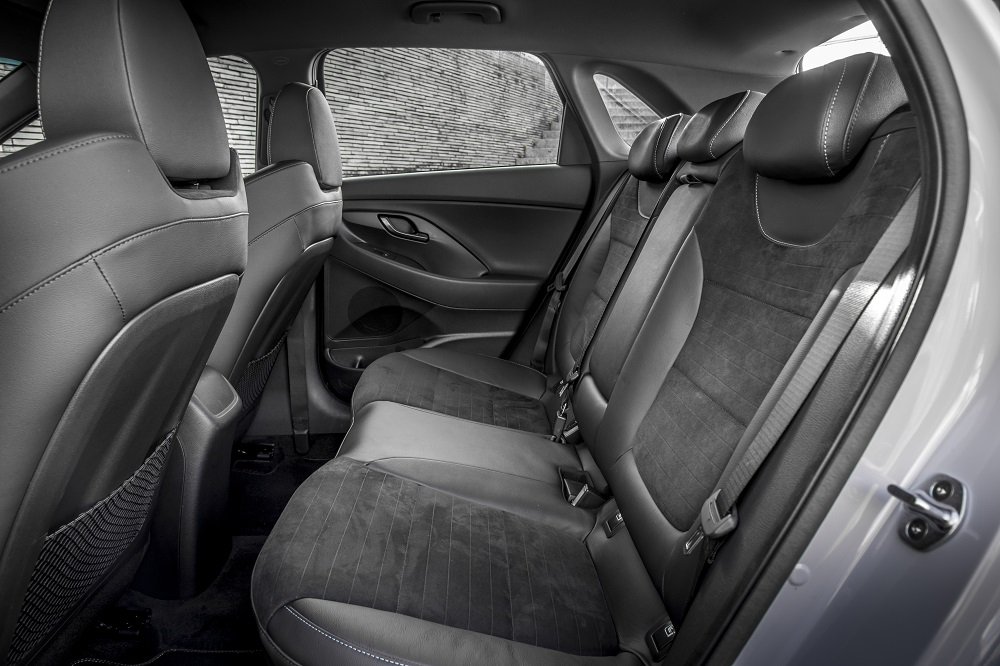 The rear of the cabin is not the roomiest in the class but, by the standards of most other family hatch-sized hot hatch contenders, the space provided in the rear is quite competitive and probably as much as most buyers will need. As for boot space, the 381-litre cargo capacity is class-competitive. 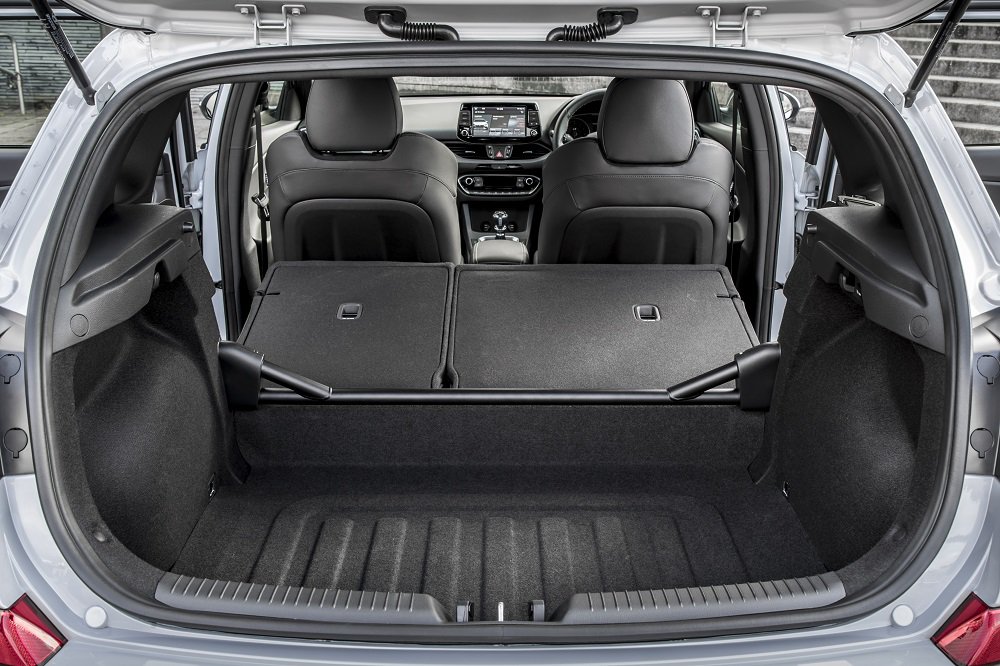 Both cars use the same four-pot turbocharged 2.0-litre petrol engine but the N Performance benefits from an additional 25hp, boosting total power output to 275hp. The standard electronic limited slip differential prevents excessive power being allocated to just one of the front drive wheels, along with an ‘active variable exhaust system’ which emits a playful ‘crackle’ and ‘pop’ audio track from the exhaust when in N or Custom drive mode. (PS – it’s best in tunnels or when overtaking Golf GTi’s.)

There is no dual-clutch automatic gearbox option available on the N models – and consequently no flappy paddles – as both are fitted with an excellent manual six-speed short-throw gearbox.

Body mods over the standard i30 include reinforced front suspension strut rings, strengthened front sub frame and a central tunnel support bracket and inside is a stiffness bar across the rear wheel arch lowers. 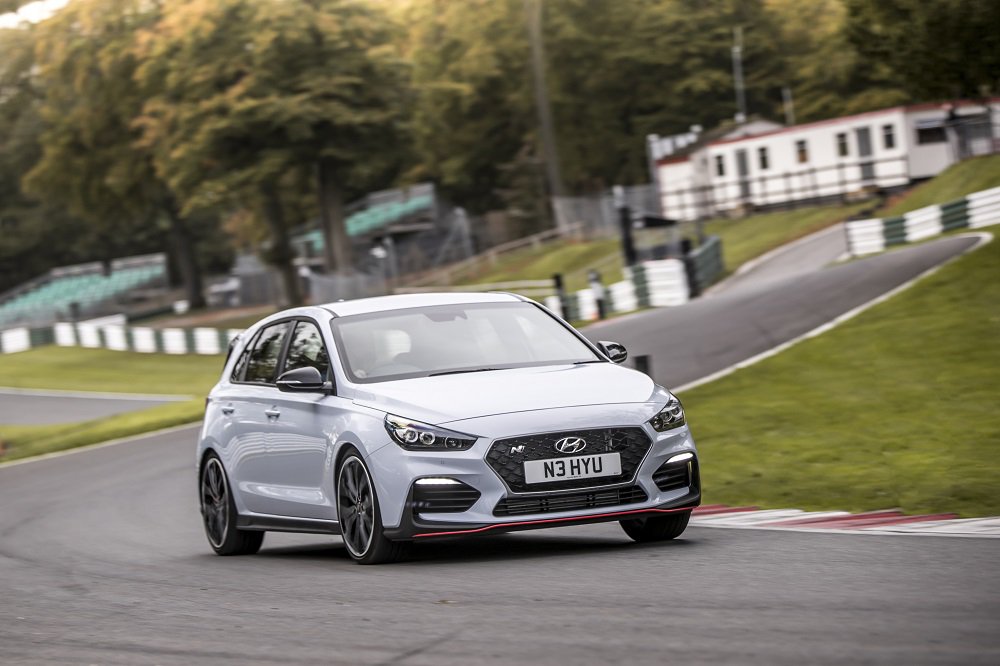 In outright performance terms, both i30N and i30N Performance are electronically limited to 155 miles per hour, with the 0-62 sprint reached in 6.4 and 6.1 seconds respectively. Both models share a torque figure of 353Nm available between 1,500 and 4,700 rpm.

Other shared equipment includes a launch control function to assist with maximum acceleration from a standing start, a cool steering wheel mounted rev match switch that eliminates the need for heel and toe gear changes, and ‘brake control knock back pre-fill’ to maximise braking response after high g-load cornering. 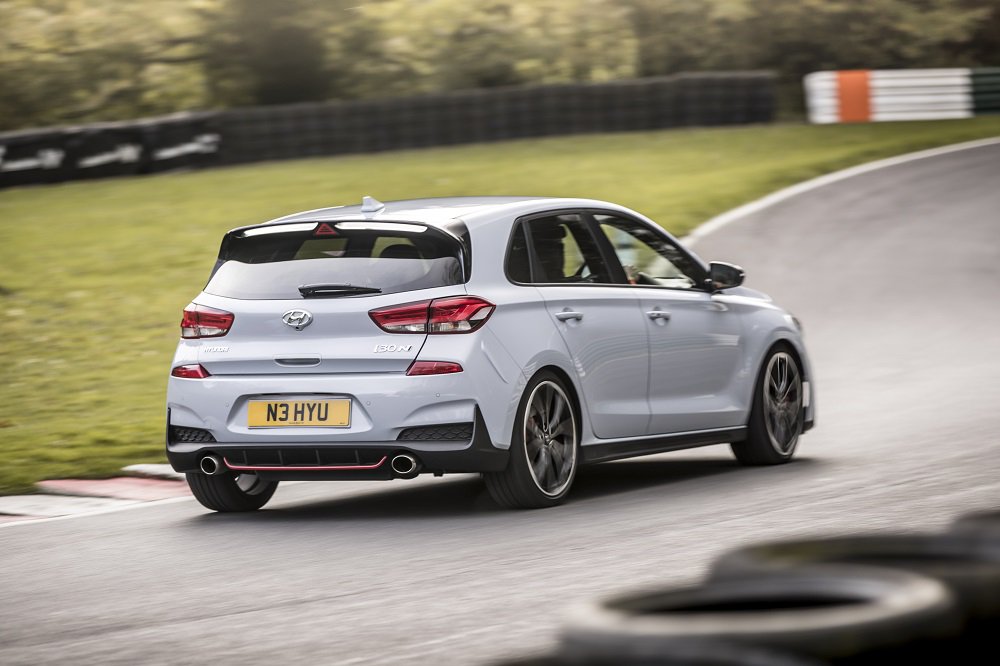 The punchy 2.0-litre engine has a wonderfully thuggish quality that suits the car very well. Turbo boost arrives a little late and hard, its low-rev anaemia morphing to a full-blooded surge with white knuckle suddenness. The soundtrack is deep throated even with the exhaust in its quietest mode and approaches antisocial when revved with the exhaust in its loudest setting. The engine spins eagerly to its 6,000rpm / 250 horsepower peak and continues slightly less willingly to the rev limit 750 rpm later. There are sequential upshift LEDs integrated into the top of the instrument cluster to encourage harder applications of power. 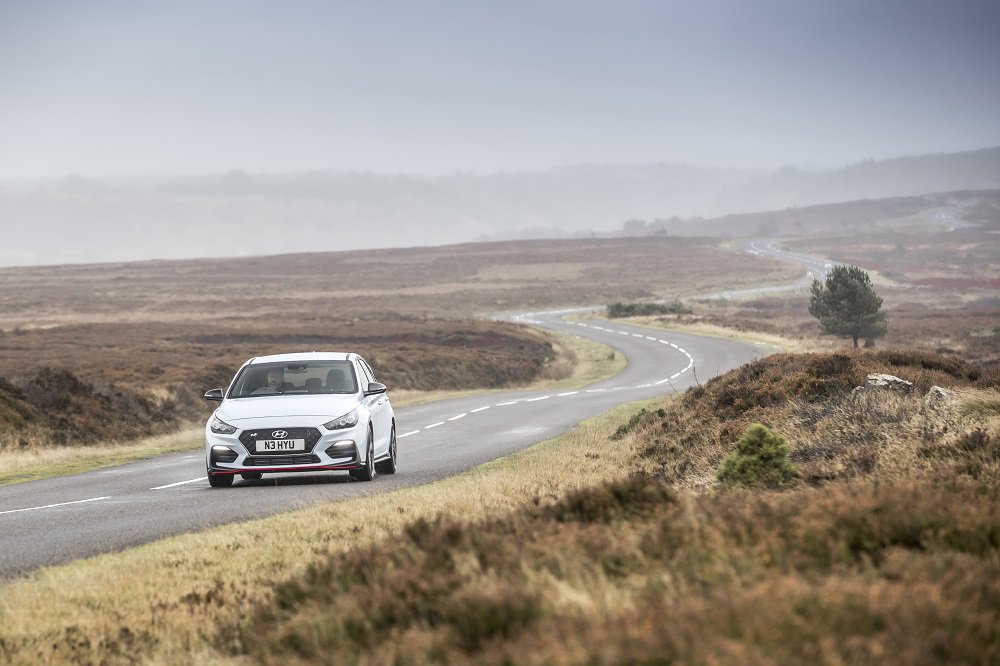 While the limited-slip differential helps the i30 N Performance find impressive traction, there is still some torque steer at low revs. But it’s of the exciting sort, rather than wayward. The engine feels as if it’s spinning a hefty flywheel and holds onto its revs stubbornly when the throttle is lifted, so downshifts need to be timed carefully. In top gear the engine is turning at a becalmed 2,100 rpm at 60 mph, from which throttle inputs are met with much lag. Fortunately, downshifting is a sonorous joy aided as it is by rev matching and the short shift action is accurate and nicely weighted.

Ride quality is firm even with the dampers in their more pliant settings and higher speeds over anything other than perfect surfaces produce lots of road noise to add to the omnipresent engine grumble. At enthusiastic speeds and higher cornering loads, the chassis proves itself to be well disciplined, resisting roll and fighting hard to prevent bumps from throwing the car off a chosen line. The steering is excellent, although, as is often the case with electrical assistance, it feels most natural in a more laidback setting. Default suspension settings in N drive mode are too harsh for street use, but a myriad of customisation options means it is possible to find a sweet spot for both conditions and driver preference. 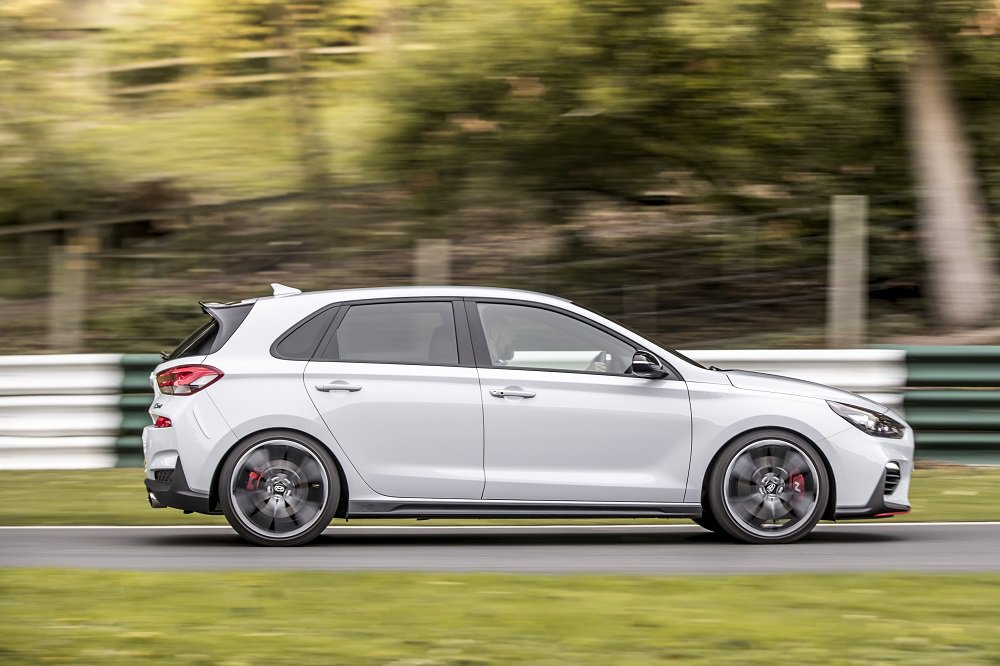 While the i30 N Performance isn’t one of the quickest cars in the hot-hatch arena, it scores high in the fun-to-drive criteria – realistically a better measure of a performance car than tenths of a second or g-forces. The well-engineered chassis setup offers respectable grip and excellent balance.

Traction is feisty but sure and the limited-slip diff helps the front end put up a spirited defence against understeer. Yet, when the i30 N Performance does start to nudge a little wide, it comes obediently back into line in response to an eased throttle. Turn in harder after selecting the stability control’s Sport mode and the system will even allow a charitable amount of rear-end breakaway before stepping in to restore order. 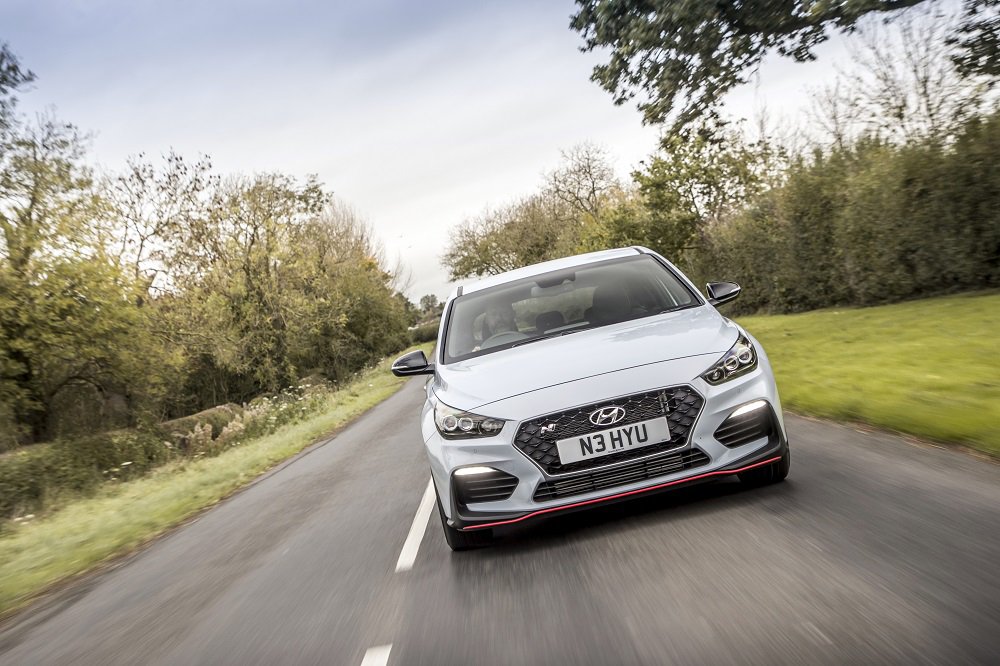 Hyundai’s first hot hatch is the complete package and a credit to the embryonic N brand. It brings strong power, plenty of equipment and a thrilling, adrenalin-filled driving experience. The result is not one punch, but a well-orchestrated flurry of body blows inflicted on its rivals. It’s so much more than very good.

Hyundai is rightly proud that it finally has a car for the driving enthusiast. A rummage through the specifications of the Hyundai i30N Performance shows the family-oriented five-door hatch indeed has the bona fides to rival established hot front-drive rivals from Europe…and beyond.

Smart styling, comfortable, well-equipped and easy to drive, the...