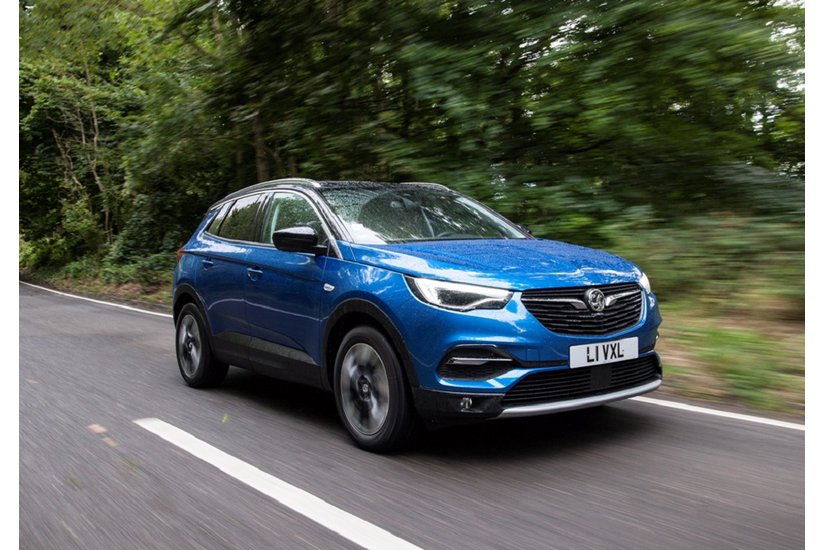 Launched last year, the Vauxhall Grandland X is the largest SUV made by Vauxhall and, along with the compact Crossland X and middling Mokka X, completes the firm’s three-model SUV line-up. This car is a big deal for Vauxhall – the company expects the Grandland X to become the second best-selling model in its range behind the Astra.

Vauxhall hasn’t had a C-Segment SUV of this size since the market unwittingly drowned its unloved and uncompetitive Antara and co-stable Chevrolet Captiva models a few years ago. With Vauxhall now an integral part of the French PSA Group – which makes the Peugeots and Citroëns we drive today – the Grandland X is the second fruit borne of that amalgamation (the first being the Crossland X / Peugeot 2008). And rather good it is, too.

If you’re going to introduce an all-new SUV, basing it on the 2017 European Car of the Year in the Peugeot 3008 is a healthy start. It shares its underpinnings with other members of its adopted PSA family, like the equally well-received Peugeot 5008, the DS7 Crossback and the imminent Citroën C5 Aircross.

A head start from the off then, but is the Grandland X – being by far the more interesting of the new Vauxhall SUV line-up – good enough against rivals such as the ubiquitous Nissan Qashqai, Ford Kuga, Volkswagen Tiguan and Kia Sportage? 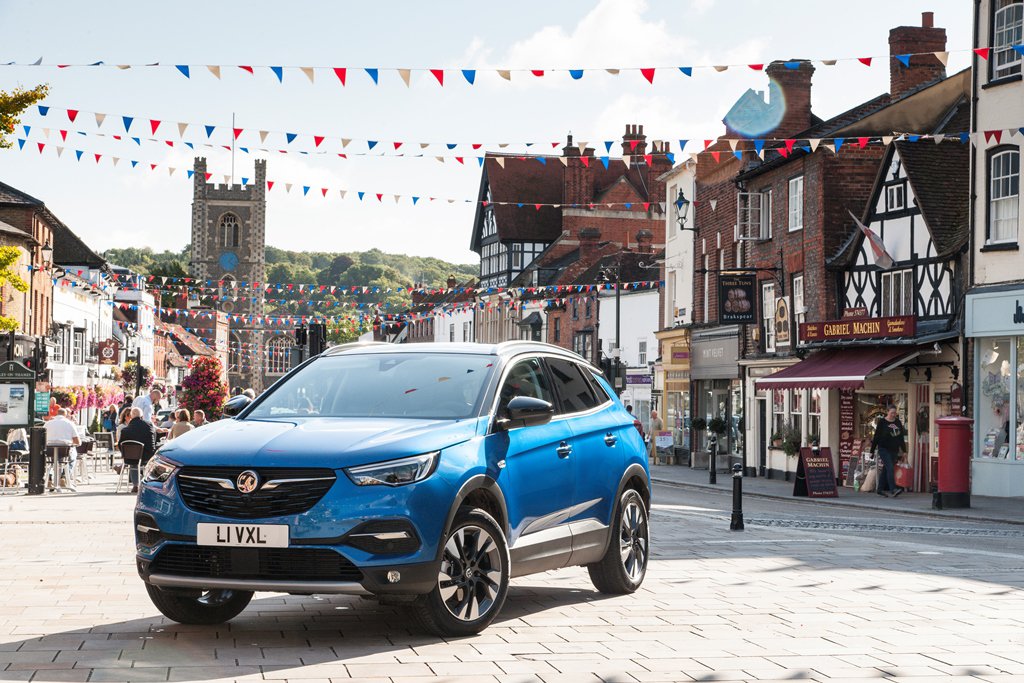 The Grandland X looks the least blobby when compared to Vauxhall’s two other SUV models. It gets the company’s latest frontal lobe with distinctive LED daytime running lights and its flanks wear a sharp line running upwards from the front wheel arch wrapping around the boot. While not particularly striking, it’s all tastefully done, as is the beefy cladding on the lower door sills.

The use of a reverse-flick C-pillar (first seen on the little DS3), which is partially painted at the top affords a floating roof effect and a contrasting black roof colour on higher grade models reinforces the illusion. 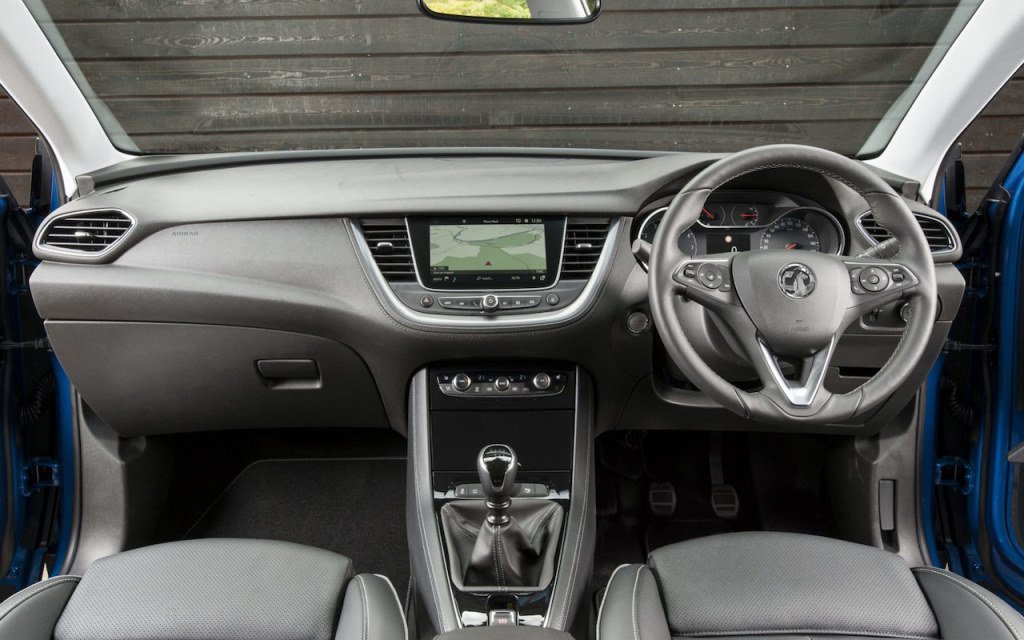 While the Grandland X shares the underpinnings and much of its mechanicals with the Peugeot 3008, those expecting the Gallic flair of the Peugeot’s glitzy, avant garde interior will be disappointed. The Vauxhall’s layout is far more conventional which is in keeping with the target market of the car – straight down the middle of the demographic road

If you’ve recently had the pleasure of being inside the current Astra, or new Insignia or more diminutive Crossland X, the dash will look rather familiar – and that’s no bad thing as it all works very well. Noticeably higher quality switchgear is very well organised and logically laid out. Interior fit and finish along with the quality of materials, such as soft plastics in the critical touch zones, seemed fine. It is especially pleasing to see that Vauxhall still flatly refuse to incorporate the heating and ventilation controls into the touch-screen and instead maintain a separate, more intuitive HVAC pod below the centrally mounted infotainment unit.

Both the front and rear seats are comfortable enough and all-round visibility is good. Headroom and legroom are also fine both front and rear, although the de rigour rear centre ‘seat’ is not a pleasant place to spend any length of time…for anyone, let alone a grumpy teen. 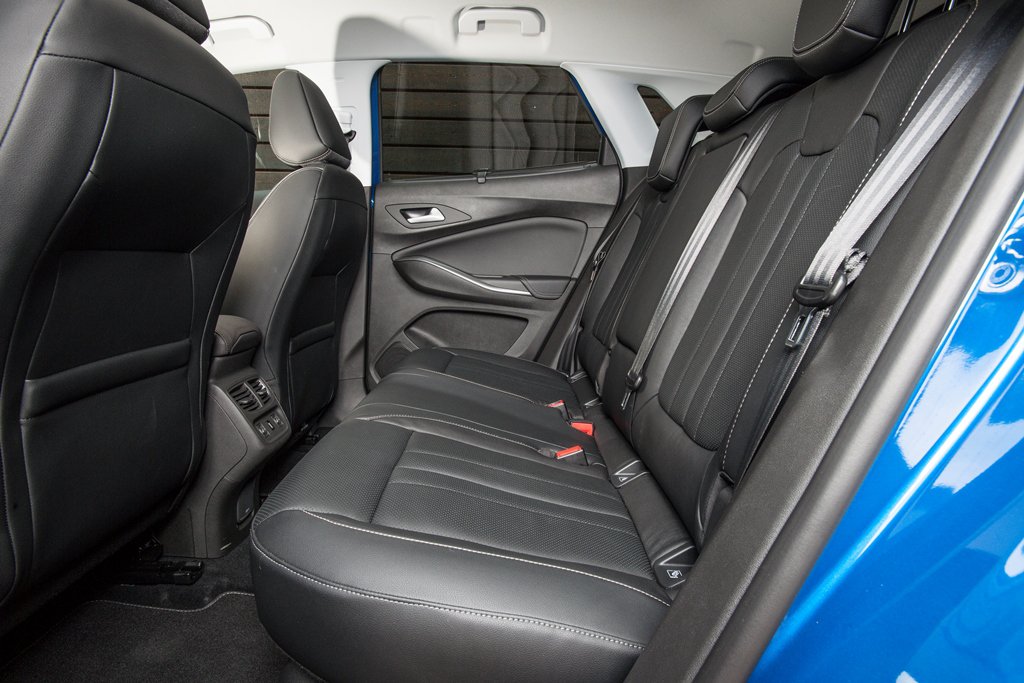 At 514 litres with row two in place, boot space is good and more than adequate for everyday family use. There’s a double boot floor (not on the SE) so you can squirrel away the odd valuable out of sight, or lower it to accommodate the odd bit of bulky cargo when needed.

The glovebox is tiny and with the exception of a pair of crumpled gloves, is pretty pointless for anything. General cabin storage for every day detritus is also lacking and seems at odds with the car’s raison d'être towards families. Kit level on the range-entry SE is generous to say the least and includes Vauxhall’s own R4.0 IntelliLink system with smartphone projection, Apple CarPlay and Android Auto7-inch colour touchscreen, DAB radio, Bluetooth phone and audio streaming and a USB connection with iPod control. 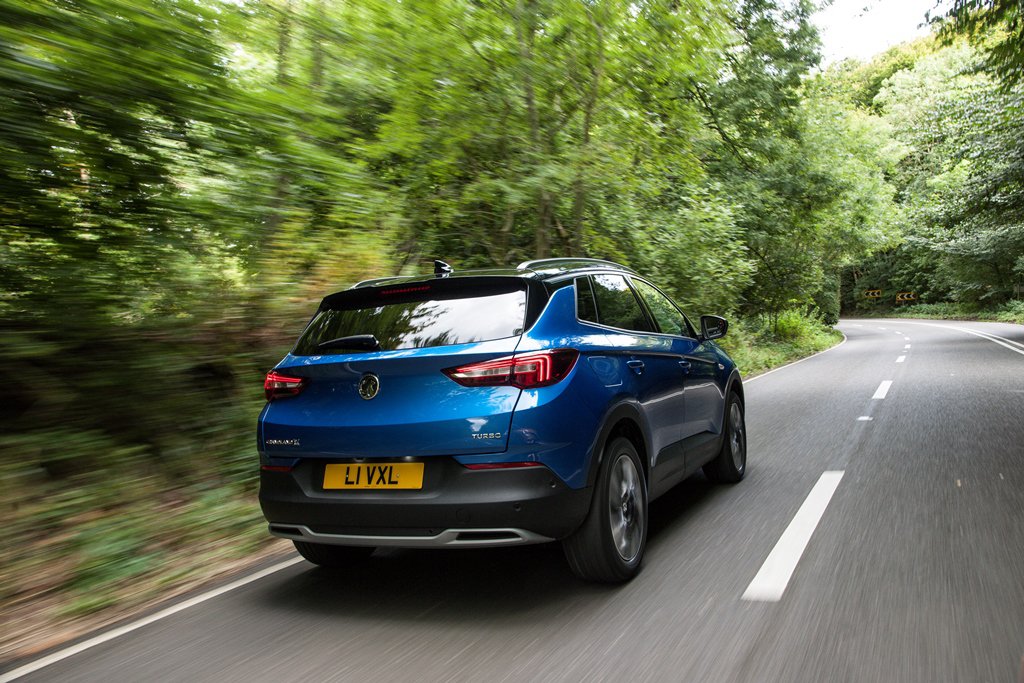 There is just the one petrol and two diesel engines currently available on the Grandland X.

The turbocharged three-cylinder 1.2-litre 128bhp petrol engine offered with the Grandland X is carried over from the Peugeot 3008. It’s smooth and punchy and delivers remarkable performance than its small capacity might suggest. In manual guise, 0-62 takes a brisk 11 seconds and with the current assault on diesel engines, most buyers will find the petrol engine the pick of the range. It is also available with a good six-speed automatic gearbox, which some may find preferable over the manual.

If it’s the low down torquey grunt of a turbocharged diesel you’re after, don’t be put off: the 118bhp 1.6-litre engine offered with the Grandland X offers impressive economy and is a proven performer in other PSA Group vehicles. Offering 300Nm of torque from as little as 1,750rpm, it’s a talented engine that’s happy to be driven at low revs, but doesn’t get too raucous at the opposite end of the rev counter. It too is able to be paired with the manual or auto ‘box.

Reserved exclusively for the top of the range ‘Ultimate’ trim is a 2.0-litre diesel which is paired only to an eight-speed automatic gearbox – there is no manual option on the Ultimate model. This engine produces 175bhp, but delivers its power at low engine speeds to provide a smoother driving experience and is particularly useful for those who frequently tow. 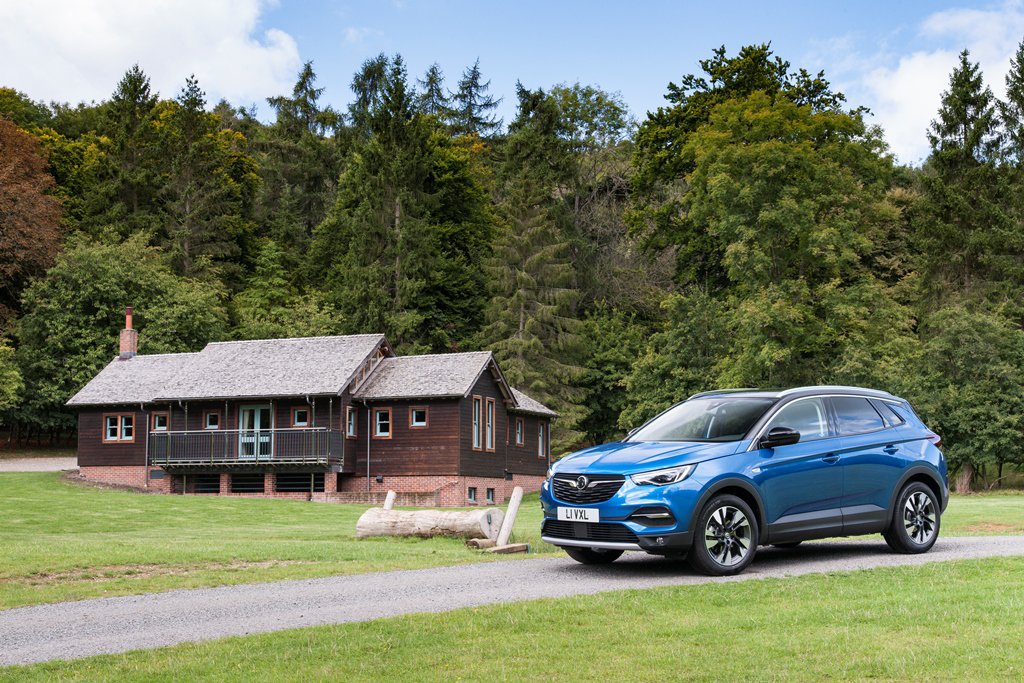 It’s generally accepted that buyers of family-oriented SUV’s like the Grandland X are less hung up on a car’s outright handling capabilities than owners of conventional hatchbacks and saloons. Rather than being a driver-centric, crisp-handling SUV like a few of its considerably more expensive rivals, the Grandland X is a relaxed, comfortable and easy car in which to cover long distances, whether as a driver or passenger. If that’s what you’re after, it’s very easy to recommend.

It’s not all rosy in the R&H department though…its very light steering provides little knowledge of what’s going on underneath the car and the long-throw manual gearbox provides little encouragement for those attempting quick, slick shifts. But, this isn’t what the Grandland X is about.

Despite relatively soft suspension, body lean is adequately controlled and the lenient suspension setup means the Grandland X dismisses potholes with aplomb, rather than sending jarring jolts through the interior. There is detectable wind noise around the wing mirrors once up to cruising speed, but you notice it only because of the Grandland X’s otherwise hushed nature. Unlike the Mokka X, the chunkier Grandland X does not offer four-wheel drive in the range. However, it is the first Vauxhall to feature the IntelliGrip electronic traction control system – but linked only to the front drive wheels, not all four. It helps eliminate wheel spin and avoid getting stuck in slippery conditions. Therefore, you can expect the Grandland X to undertake a modicum of green laning or venture pretty much anywhere a little Vauxhall Viva would happily go.

The IntelliGrip system isn’t standard on any Grandland X model either, remaining Fagin-like on the options list – surprising, considering it only costs £50. You would be forgiven for thinking that at that price, the technology would be standard across the range, thus giving the marketing gurus something to exploit.

The big Vauxhall has the circular IntelliGrip dial down where the mechanical handbrake used to be. It offers switchable modes for different surfaces – road, snow, sand and mud. Visually, it promises at least semi-serious 4x4 capabilities but, because it only governs the front two wheels, I really don’t see the point of it. Rather redirect the £50 towards a family curry night. 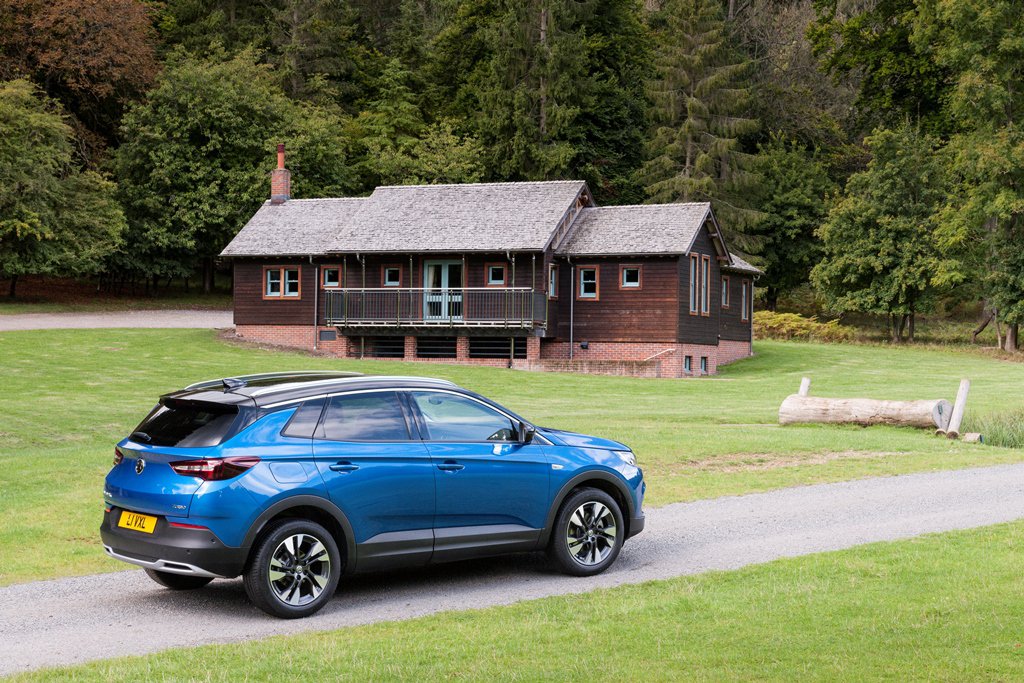 The Vauxhall Grandland X is not perfect, but it looks the part, feels great, is a genuine pleasure to drive, respectably equipped at range-entry SE level and evidently built to last. I would rate it high along with the Astra as Vauxhall’s best car currently available.

While PSA’s influence may not be in evidence at first glance on the Grandland X – particularly in the contemporary styling, it has however influenced an altogether different level of all-round quality rarely seen before in a Vauxhall.