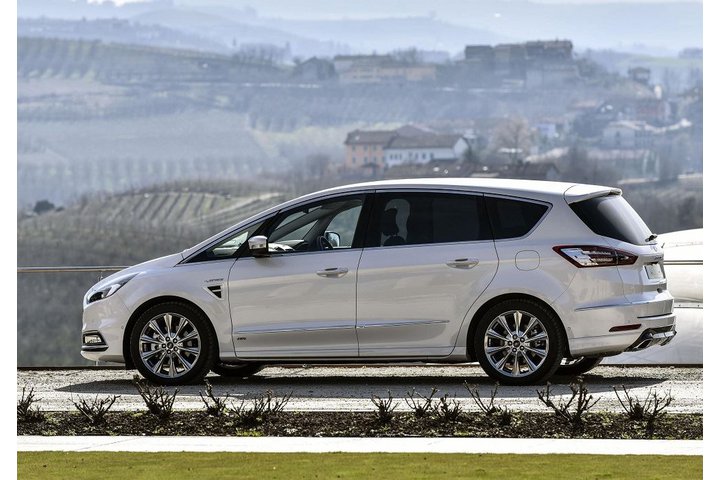 Let’s face it, a growing family still tends to be the main reason most people buy an MPV. Back in 2006, Ford decided to offer buyers all that practicality in a car that also looked good and was fun to drive in the shape of the Ford S-MAX. It was developed at the same time as the current Ford Galaxy and uses many of the same parts, but the smaller S-MAX has a sleeker roofline and a sportier suspension set-up.

The Ford S-MAX is now in its second generation and was first shown at the Paris motor show in 2014, eventually reaching our UK shores the following year. It offers seven seats as standard but isn’t as big as the VAG Group twins of the SEAT Alhambra and Volkswagen Sharan. However, it is longer than most of its other rivals, including the Citroen Grand C4 Picasso and Vauxhall Zafira Tourer.

When it’s time to sell through your beloved Focus RS due to an expanding family, Ford has helped your reluctant transition to a larger family car with the S-MAX, the greatest appeal of which lies in the fact while a big and practical seven-seater, it feels and drives like a larger sporty hatchback when you’re behind the wheel. Also, the S-MAX is remarkably comfortable, so you and your family won’t be subject to a bone-shaking ride. 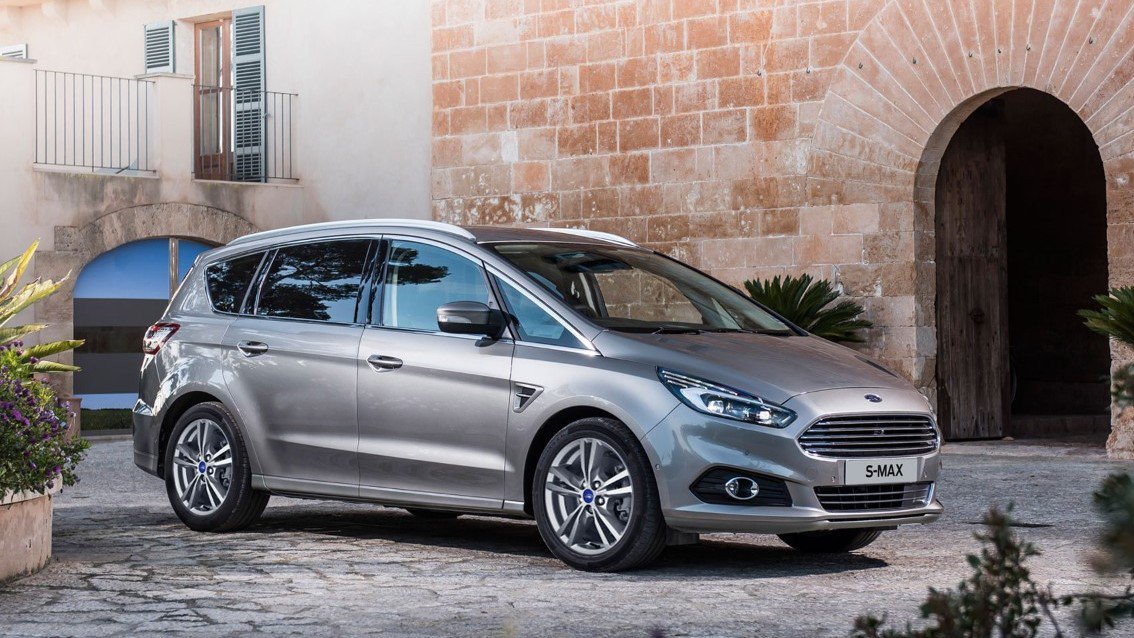 A product of Ford’s chief exterior designer Claudio Messale, there is much admire on the current S-MAX. Since 2006, the model has always been styled with sharp lines that disguise its true size. This version continues the trend, only revealing its true dimensions on narrow roads or in car parks.

But I can’t help thinking that Ford has missed a trick with the current S-MAX. It looks a little samey as all other fords, just larger. The S-MAX looks a lot like the facelifted C-MAX, which in turn looks like a Focus, which itself copies the Fiesta. I’m all for continuity of brand image and message – Volvo’s crop of three new XC SUVs (40, 60 and 90) springs nicely to mind. The basic profile remains very similar with a sloping roofline helping to avoid the unwanted boxy look of traditional people carriers. 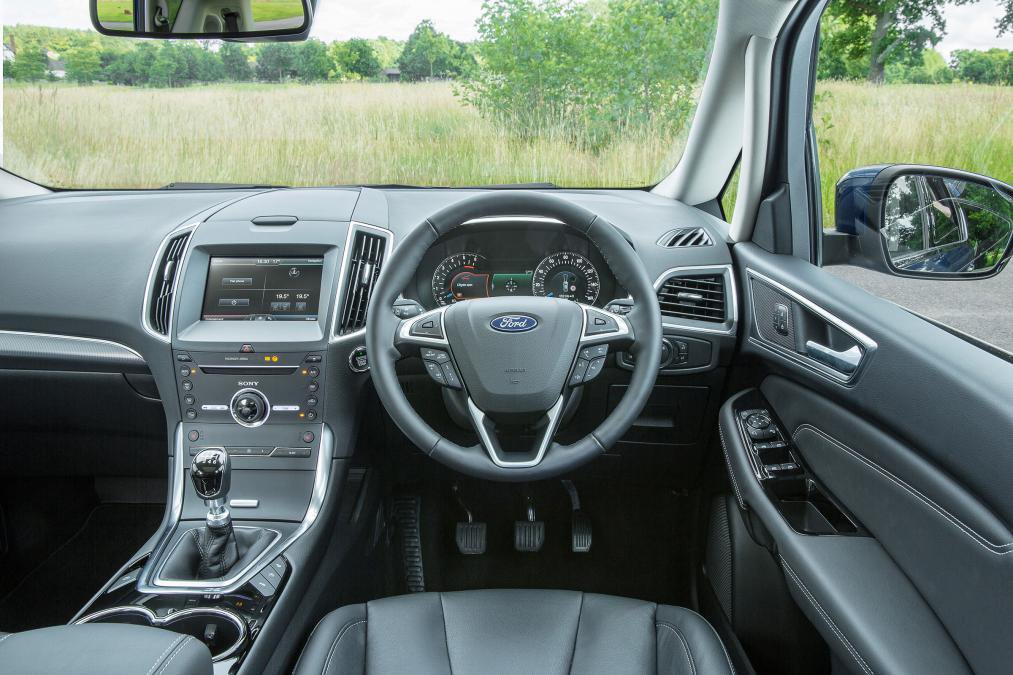 Inside is where things get a lot better for the Ford S-MAX. Unsurprisingly, the interior follows on from the new Mondeo with a similar central stack and instrument cluster. Gone are lots of nice details from the Mk1 S-MAX and, while the quality is impressive with high quality soft touch plastics, it has a rather bland feel to it.

There are plenty of positives though. The driving position is slightly lower, so you don't feel like you're driving an MPV and there's lots of adjustment in the steering column and seat. As a result, it's very much like being in a Mondeo. The 3D effect instrument cluster works well and the central touchscreen SYNC system is a vast improvement on what Ford had before. There are also more stowage areas. 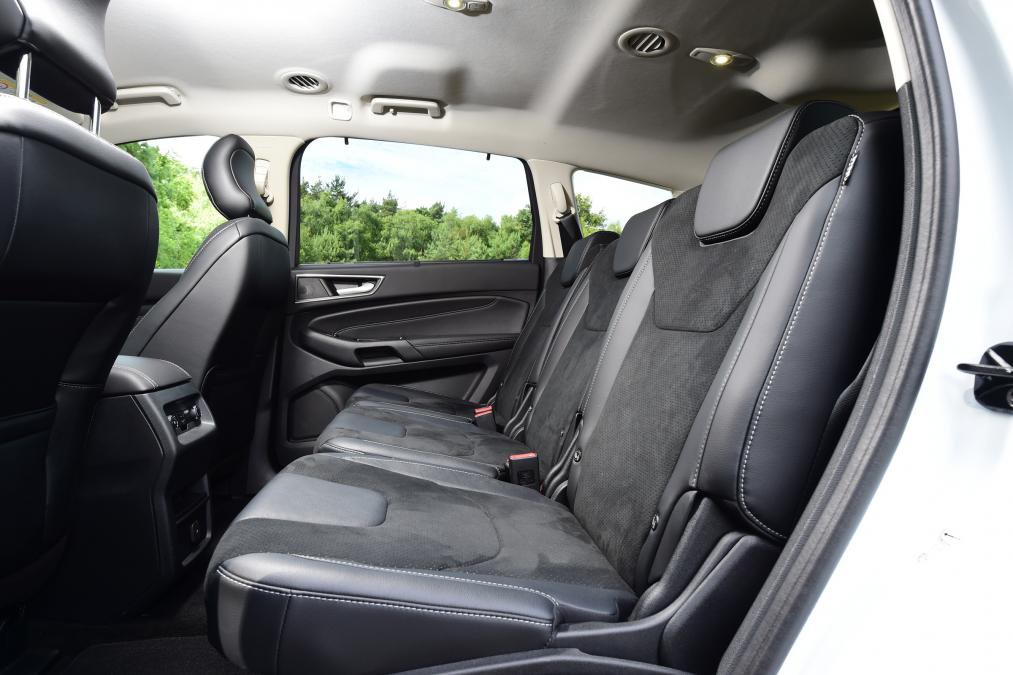 Being a family car it's as practical as you'd expect. All models come with seven seats and the five in rows two and three can be folded down, all at once if you so desire, with just the touch of a button. The 'stadium'-style seating means kids in the back can still see forward, essential to help prevent car sickness, plus the seats have been redesigned to be more comfortable.

In fact comfort has improved throughout the S-MAX. The seats are thinner which means more legroom, plus the second row slides back and each seat reclines individually as before. Those in the back get their own climate control settings with aircraft-style air vents in the roof.

Cabin surfaces range from the excellent to the obviously price-focused, but importantly the whole feels quite cohesive. The chunky leather steering wheel helps to impart a sense of quality. 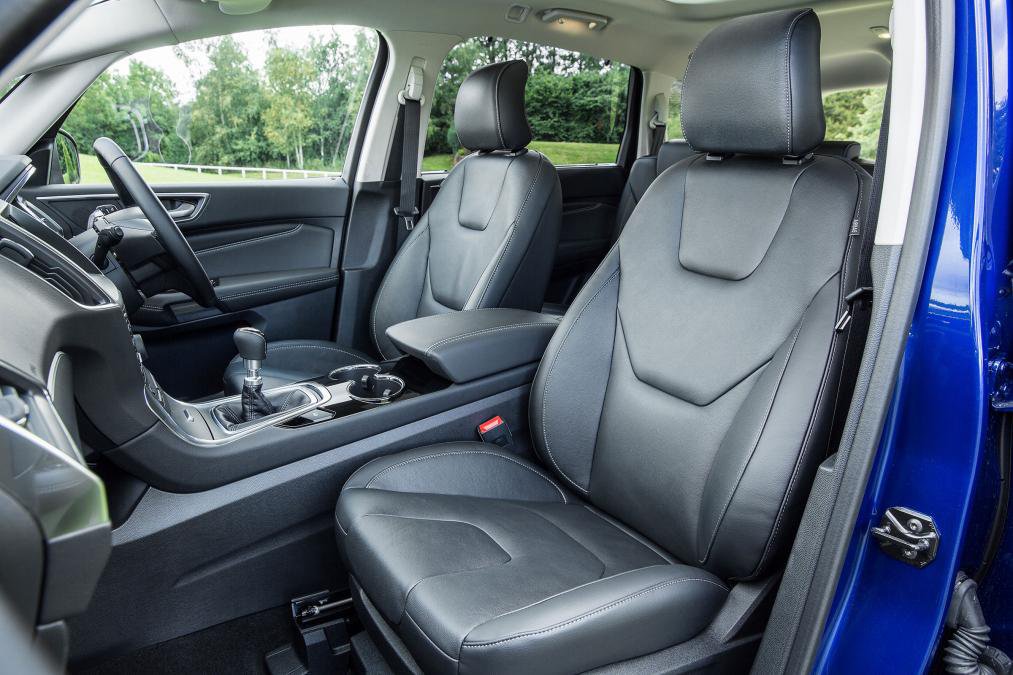 Opt for one of the posher S-MAX Vignale models and you'll benefit from heated leather seats, a SYNC 3 infotainment system and laminated side glass for improved refinement. There's lashings of chrome on the outside, too, but it's not suddenly transformed into a luxury car - the standard model is just as good looking. 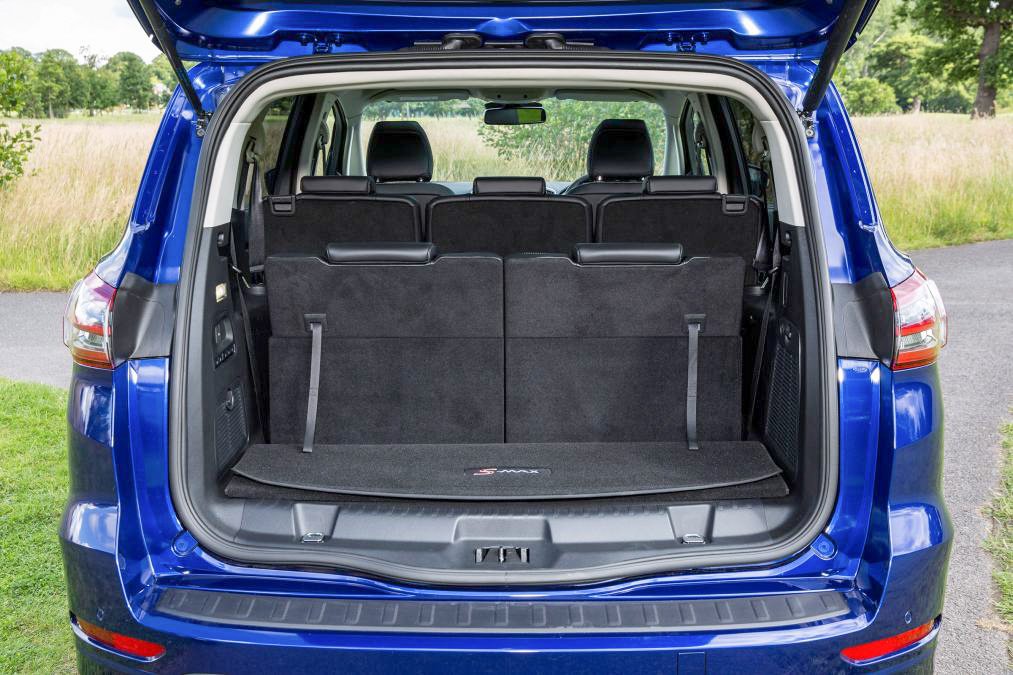 The petrol models are of course quieter, but in exchange for some added refinement you’ll have to fork out at the pumps. There’s a 158bhp/240Nm, turbocharged 1.5-litre EcoBoost which I haven’t yet tried and the 237bhp/340Nm 2.0-litre EcoBoost just doesn't feel as eager or as fast as you'd expect from a two-litre engine, especially considering there’s 340Nm or torque available from it.

The one, 2.0-litre TDCi diesel engine is available in four different power outputs – 118bhp/310Nm, 148bhp/350Nm, 178bhp/400Nm and the top-end 207bhp/450Nm unit. I have driven the mid-range 148bhp engined car which offers a decent blend of performance (0-62mph in 10.8 seconds) versus running costs and feels responsively nippy on the move. The entry-level 118bhp version might cost less, but if you regularly carry five to seven people, it’s likely to feel very lethargic and negate the excellent driveability of this car.

To be honest, I would avoid either petrol unit and opt for one of the faster, stronger diesels instead, particularly when carrying passengers and accompanying luggage.

A six-speed manual gearbox comes as standard on the S-MAX, but Ford does offer a six-speed PowerShift automatic gearbox as an option. It’s delightfully smooth but a little lazy, doesn’t like to be rushed and changes don’t feel as quick as those in the equivalent DSG gearbox you’ll find in the SEAT Alhambra or VW Sharan. Stick with the six-speed manual unless you actually need a self-shifter. 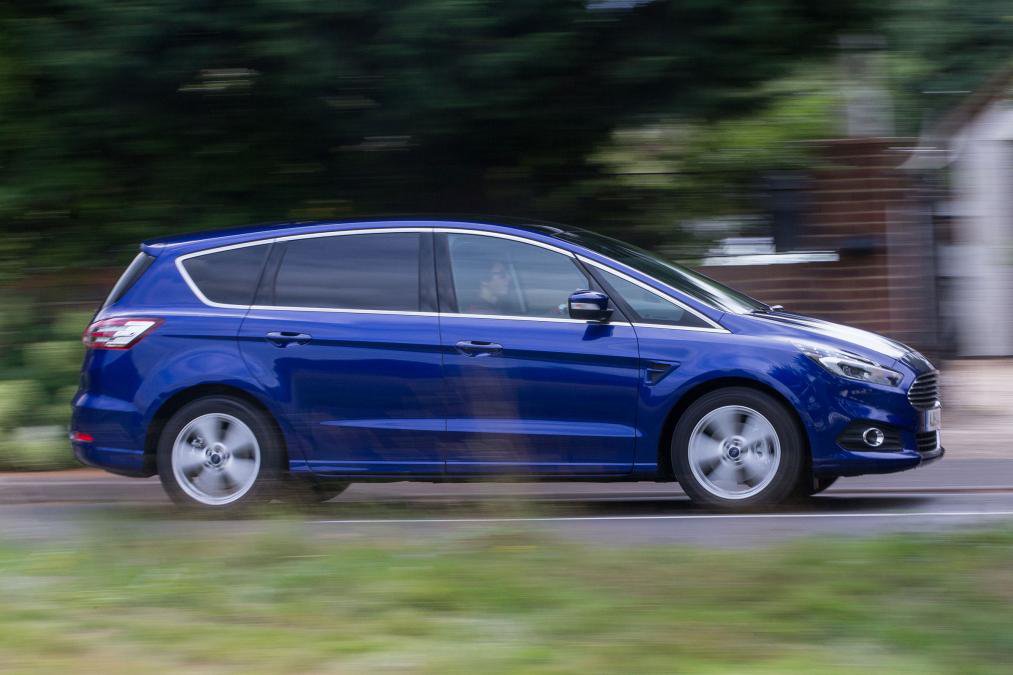 Here’s where the S-MAX steps proudly up to the plate. From behind the wheel, the S-MAX feels nimble, belying its bulk in a way few MPVs can, with the lower centre of gravity meaning it doesn’t roll as much as some of its rivals through the corners. (And here’s a little nugget for you…it’s more fun to drive than many seven-seat SUVs too!)

However, such handling prowess doesn’t mean it’s uncomfortable on motorway journeys. The compliant suspension does a great job of keeping the car in check, yet soaks up the lumps and bumps on more entertaining country roads. It’s remarkably composed, and will transport large families long distances from A to B and back again via C, without breaking a sweat. 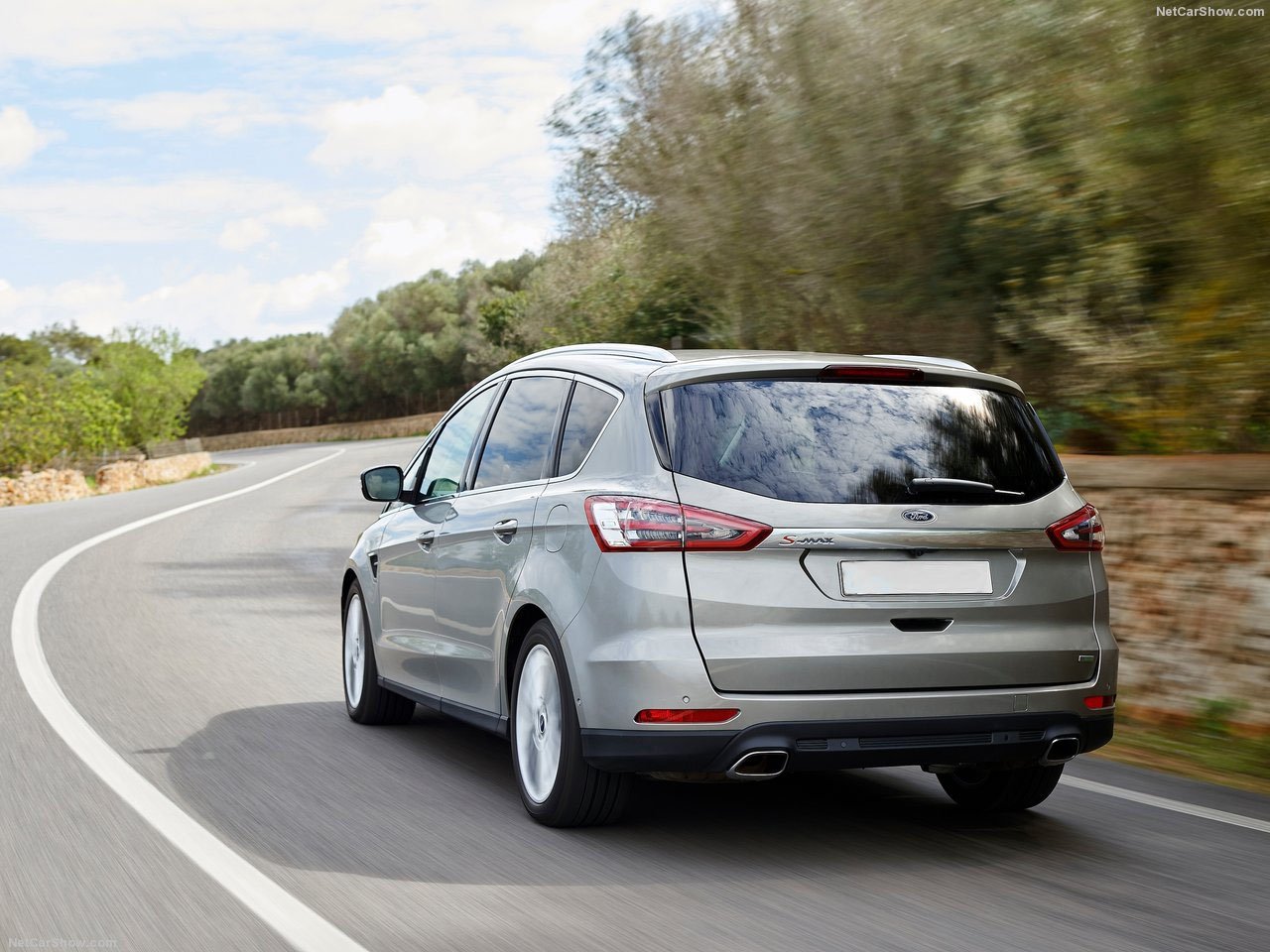 For drivers who don’t want to sacrifice an enjoyable drive and an upmarket interior for the sake of more family-friendly space, the S-MAX is ideal. There are more spacious options, including Ford’s own Galaxy, as well as less expensive alternatives such as the Citroen Grand C4 Picasso and the KIA Carens but, as an all-round, do-it-all family car with loads of substance and a bit of style, the S-MAX is still hard to beat.

Take a look at our latest Ford S-MAX lease deals