As its name infers, space and practicality are significant aspects of the Ford Galaxy, which can seat seven adults in comfort. It's one of the few traditional MPVs remaining on the market.

Those currently in the market for a seven-seater family-shifter are rather spoilt for choice. However, most of those choices now lie in the SUV sector. Far more popular in the noughties, the range of traditional seven-seat MPVs currently available in the UK is reduced somewhat. 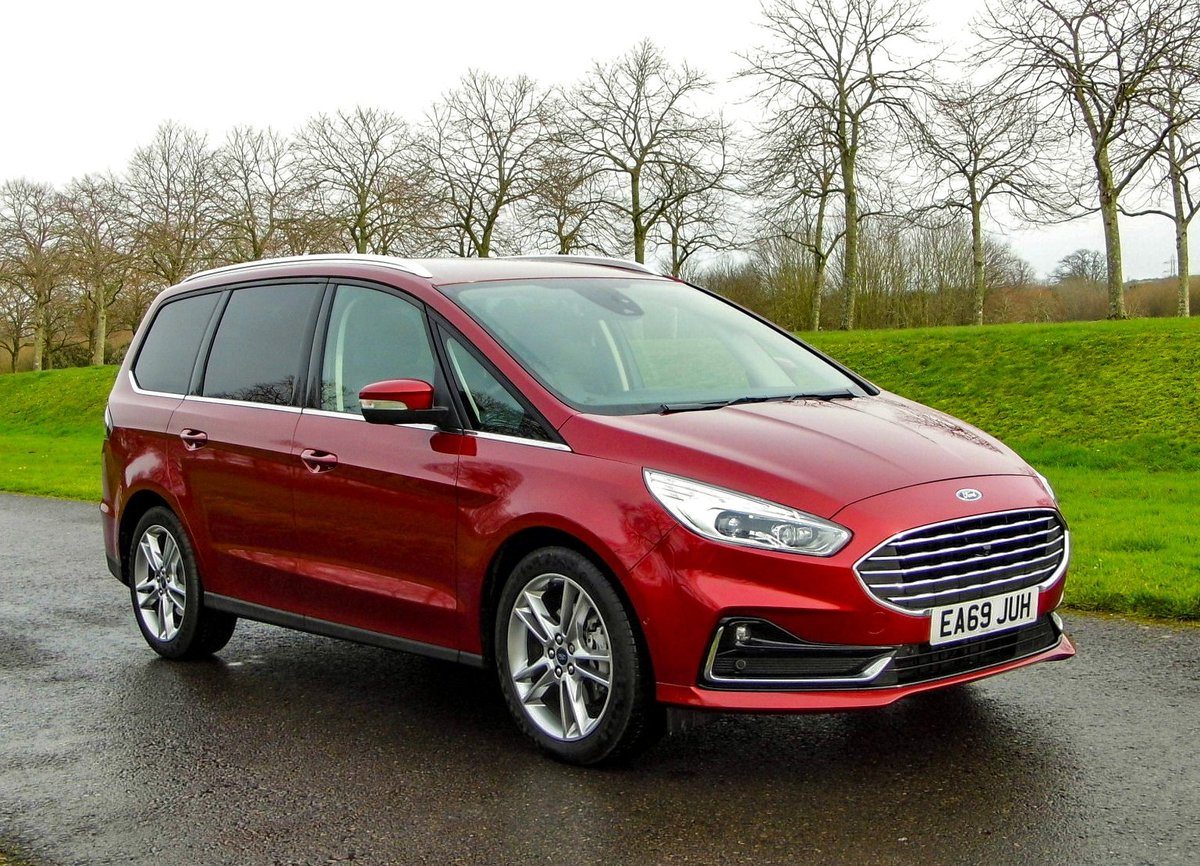 The Ford Galaxy and its closely related sibling - the sportier and more stylish S-MAX - are two of the remaining stalwarts. Both are made for people-carrying duties and share identical underpinnings, engineering technology and interior furniture and fittings.

To keep it fresh and competitive, Ford updated its Galaxy in October 2019 and, earlier this year, in between relentless storms and before our world turned upside down due to an undercooked bat, we spent some time with ‘JUH’ to reacquaint ourselves with one of the UK’s favourite people-shifters… 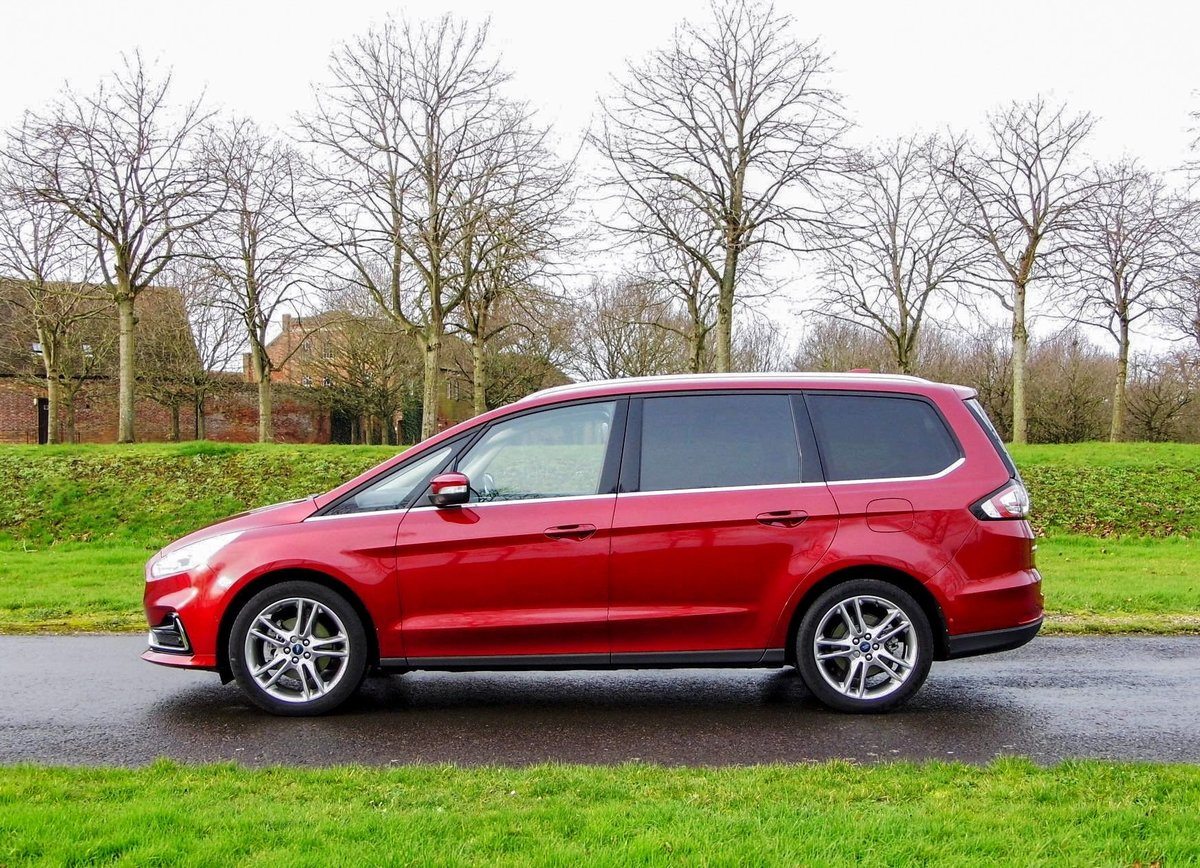 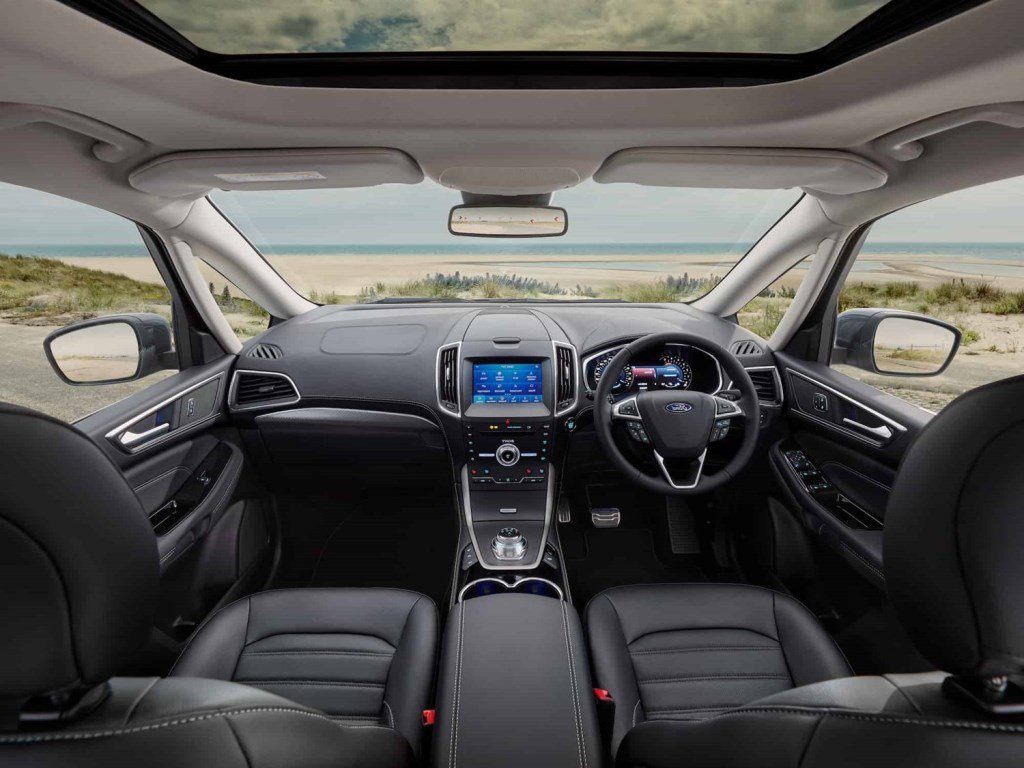 The third-generation Ford Galaxy (2015 - present) focussed on interior comfort and last year’s updates re-enforced that focus, with the introduction of new 8-way adjustable driver and front passenger seats on both the Zetec and Titanium trims.

The new front furniture help provide relief for back pain-sufferers on the road, having achieved recognition from AGR’s independent testing committee of medical experts. 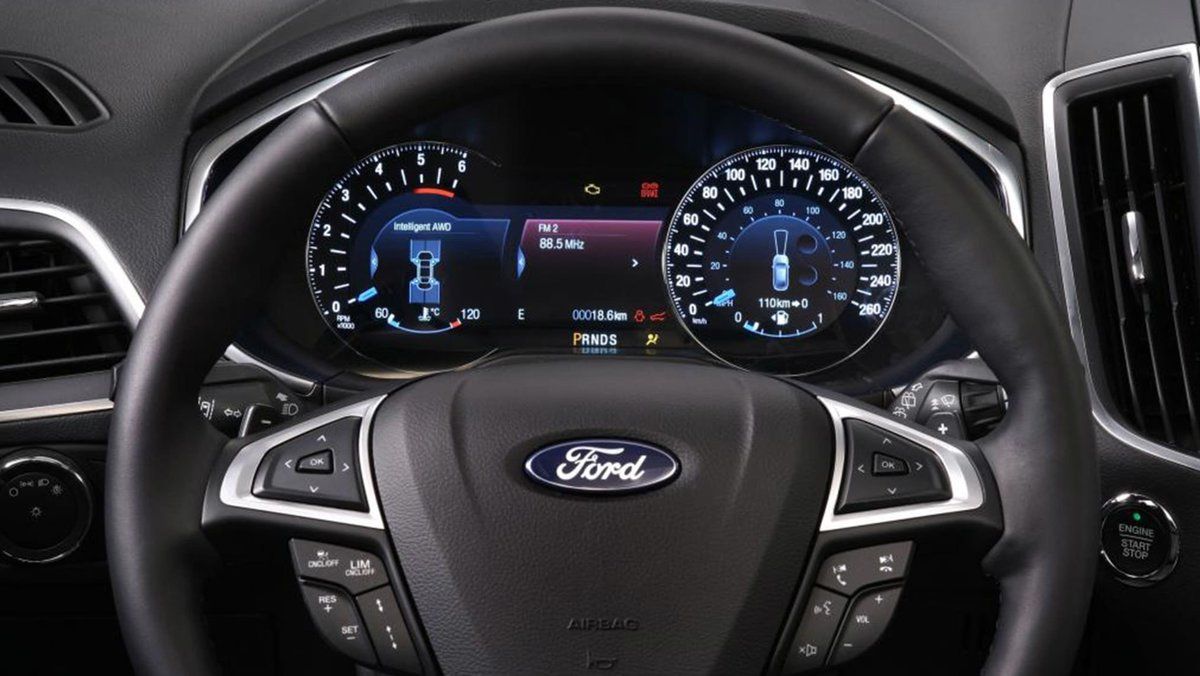 To obtain the AGR seal, the seat must be able to adapt to the person in their sitting position, rather than the person adapting their position to the seat. Adjustment includes height, length and inclination, in addition to back, neck and thigh support. The four-way lumbar adjustment is controlled electronically from a switch on the seat’s side.

Elsewhere, the interior has received an upgrade in the quality of materials used throughout, including chunky aluminium trim and some good-looking soft leather seats on the Titanium (LuxPack) model as tested. There’s still the odd bit of cheaper plastic in less visible parts of the interior, but even that feels robust. 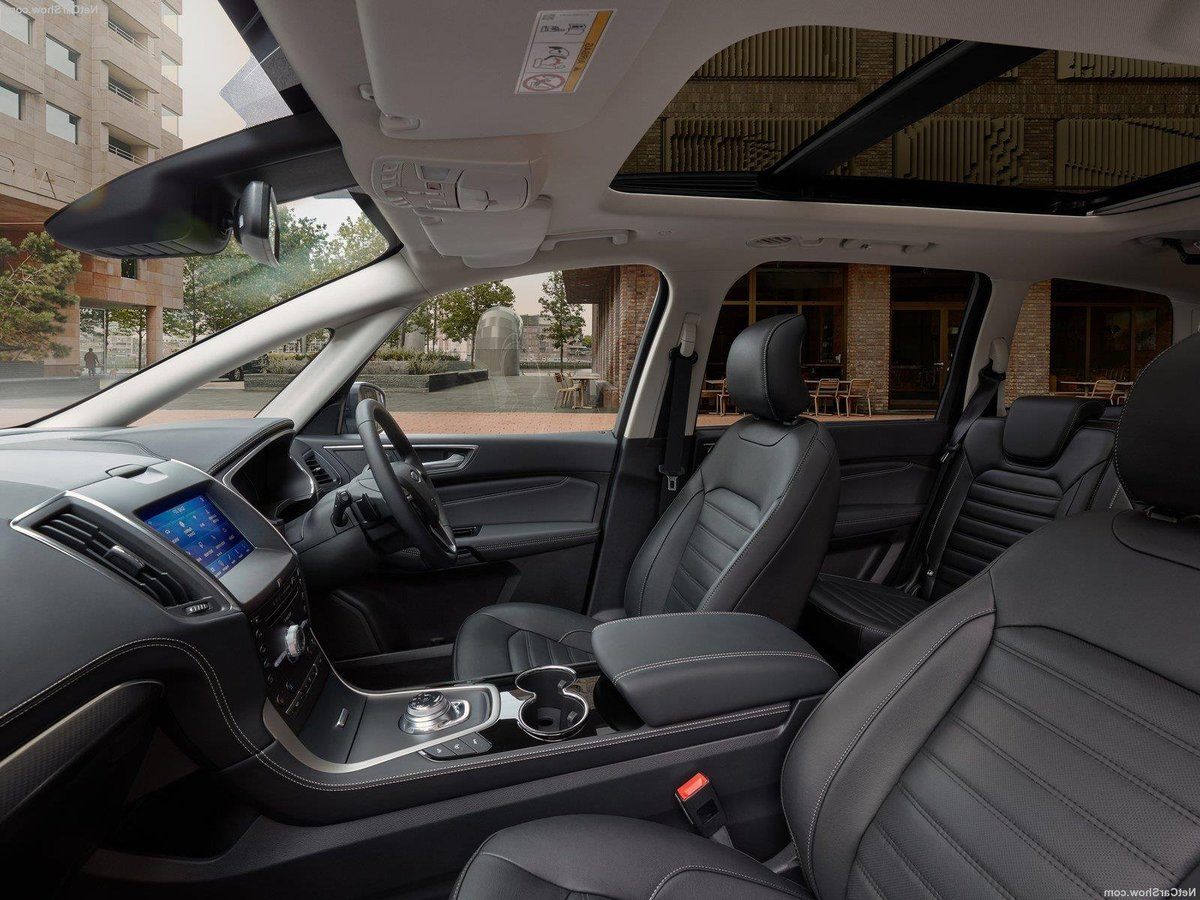 The dashboard looks modern and uncluttered thanks to an eight-inch high-resolution central touchscreen that removes the need for too many buttons. A 10.1-inch semi digital instrument cluster is standard on the Titanium trim level and optional on Zetec models. This screen merges with the traditional instrument cluster and is a useful addition that can be fully controlled from the multifunction steering wheel. The overall design of the interior looks fresh and upmarket, while the optional full-length panoramic glass roof really enhances the spacious feel of the car. 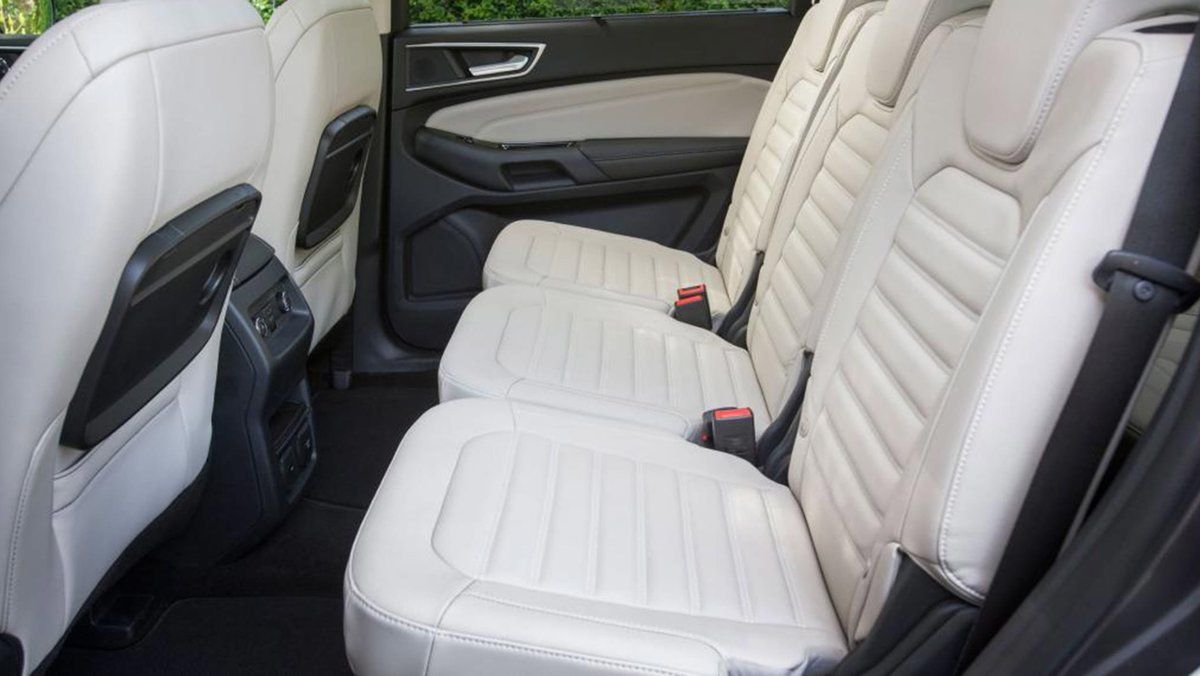 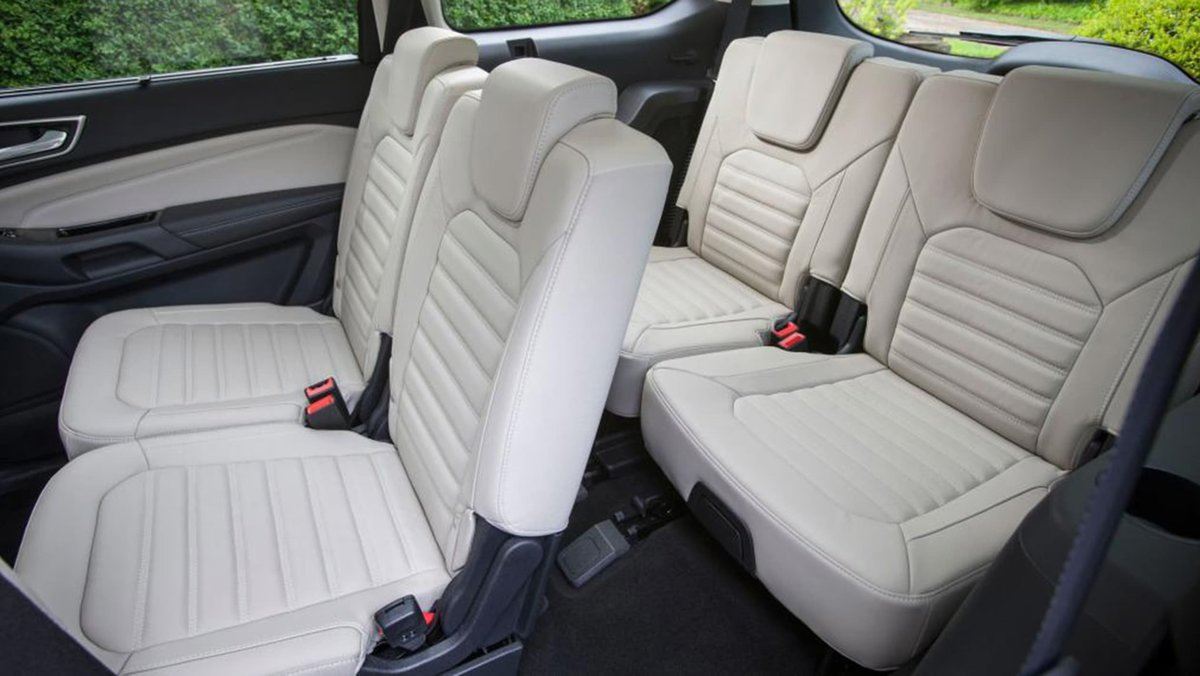 As Ford’s largest MPV, the Galaxy goes some way beyond the practicality that the S-MAX offers, trading some of that model’s nimble feel from behind the wheel. The payoff is worthwhile, though – the Galaxy is one of the most versatile cars on the market.

We’re used to testing cars with seven seats and finding that the third row is only really suitable for children, but that’s not the case in the Galaxy; adults can actually sit in the sixth and seventh seats and are treated to good leg and headroom, plus a big window for extra visibility. There aren't any USB ports in the third row, but it does feature a useful 12v power socket. There are plenty of storage cubbies dotted around, too, and it’s very easy for all occupants to get in and out of. 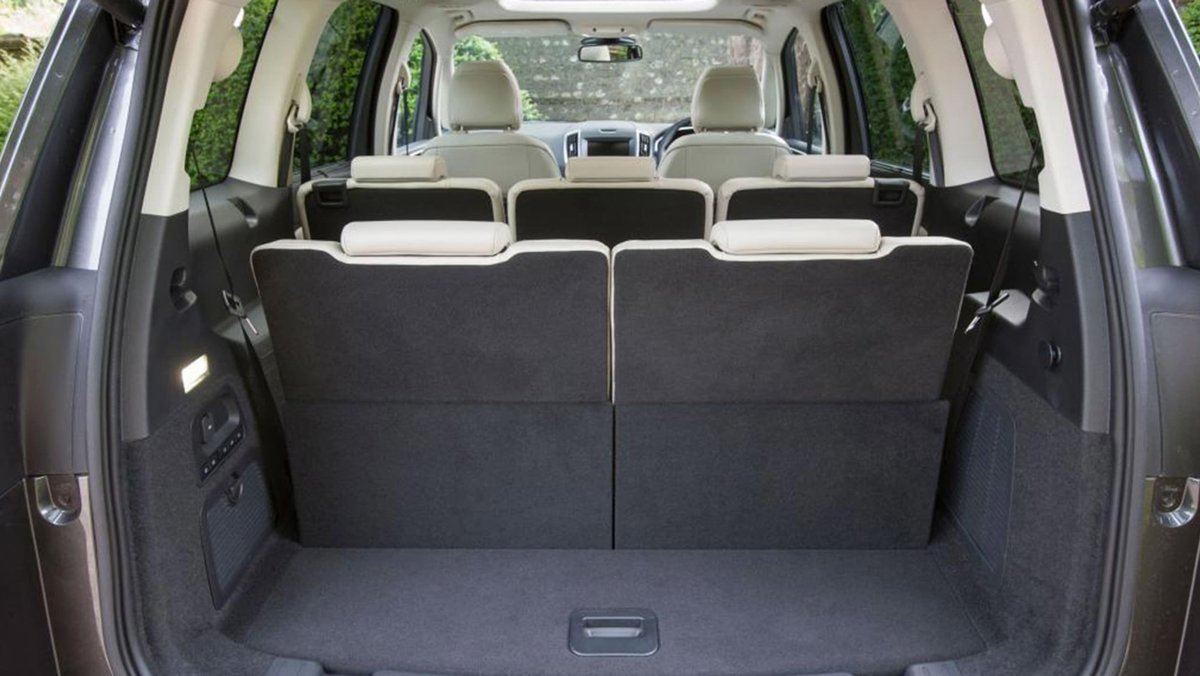 The seats of the second row slide back and forth individually if you need more legroom, while other useful features include cup-holders for the third row, a three-point socket in the second row and a deep storage bin under the front armrest. There are also three ISOFIX points in the second-row – one of the Galaxy's big advantages over other cars in its class.

There’s a slim storage bin on top of the dashboard for phones, large door bins that hold 1.5-litre bottles and picnic tables for people sitting in the second row. The rear doors open nice and wide for easy access, even into the third row of seats. 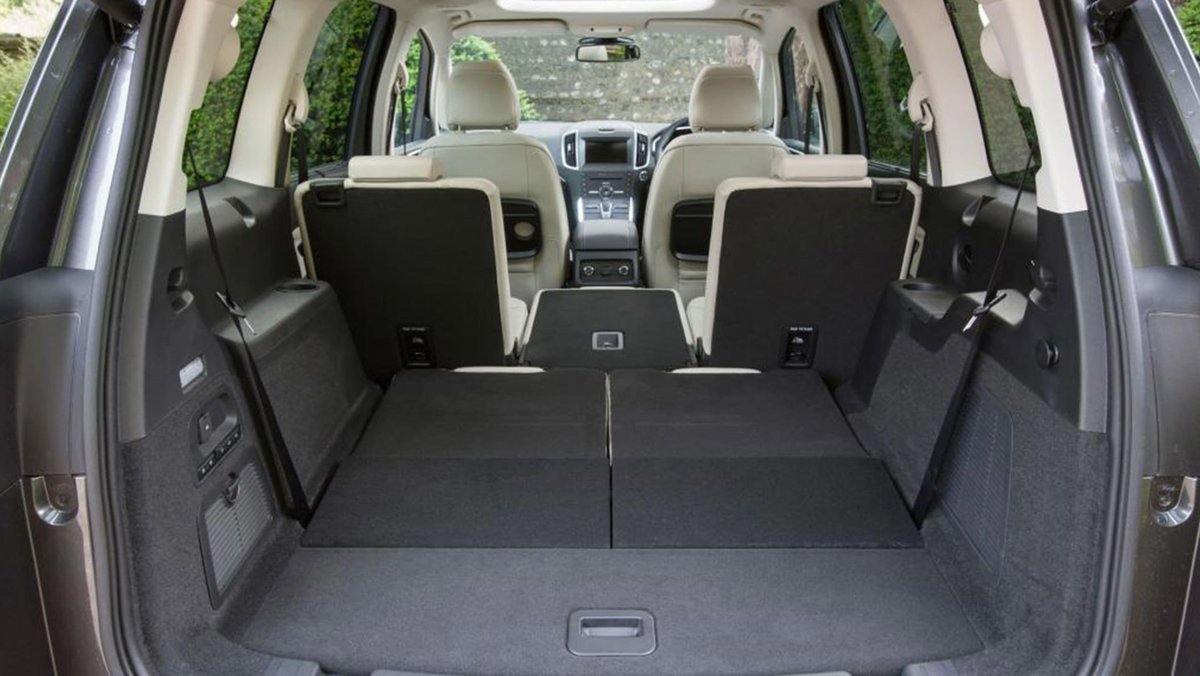 The Galaxy has a 300-litre boot with all seven seats in place, 1,301 litres with the third row down and 2,339 litres with just the front two seats in place. The opening of the boot is very wide and its loading lip is low, which together makes it very easy to put heavy and awkward items in the back of the car.

A powered boot lid is part of the LuxPack available on the Titanium model and is actually very useful because of how large the door is. Ford has made folding the seats flat very easy, with the third row dropping electrically when you press a button in the boot and the three individual seats in the second row flopping forward when you press another series of controls. 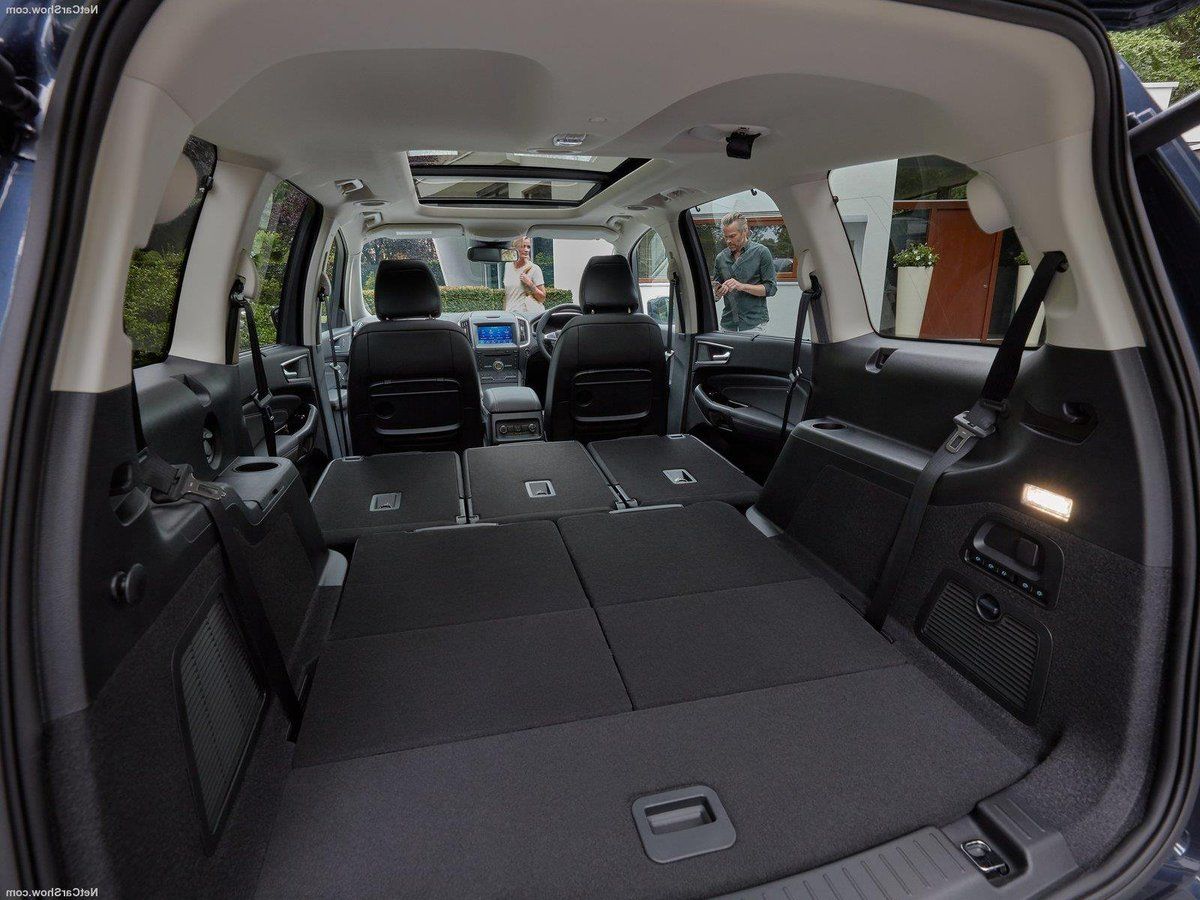 There are two trim levels to choose from when buying a Ford Galaxy: Zetec and Titanium. A third Titanium X is no longer available and by selecting the optional LuxPack, essentially becomes what the Titanium X was. The entry-level Zetec is actually very well equipped, but the Titanium model is also popular because of its extra luxuries. 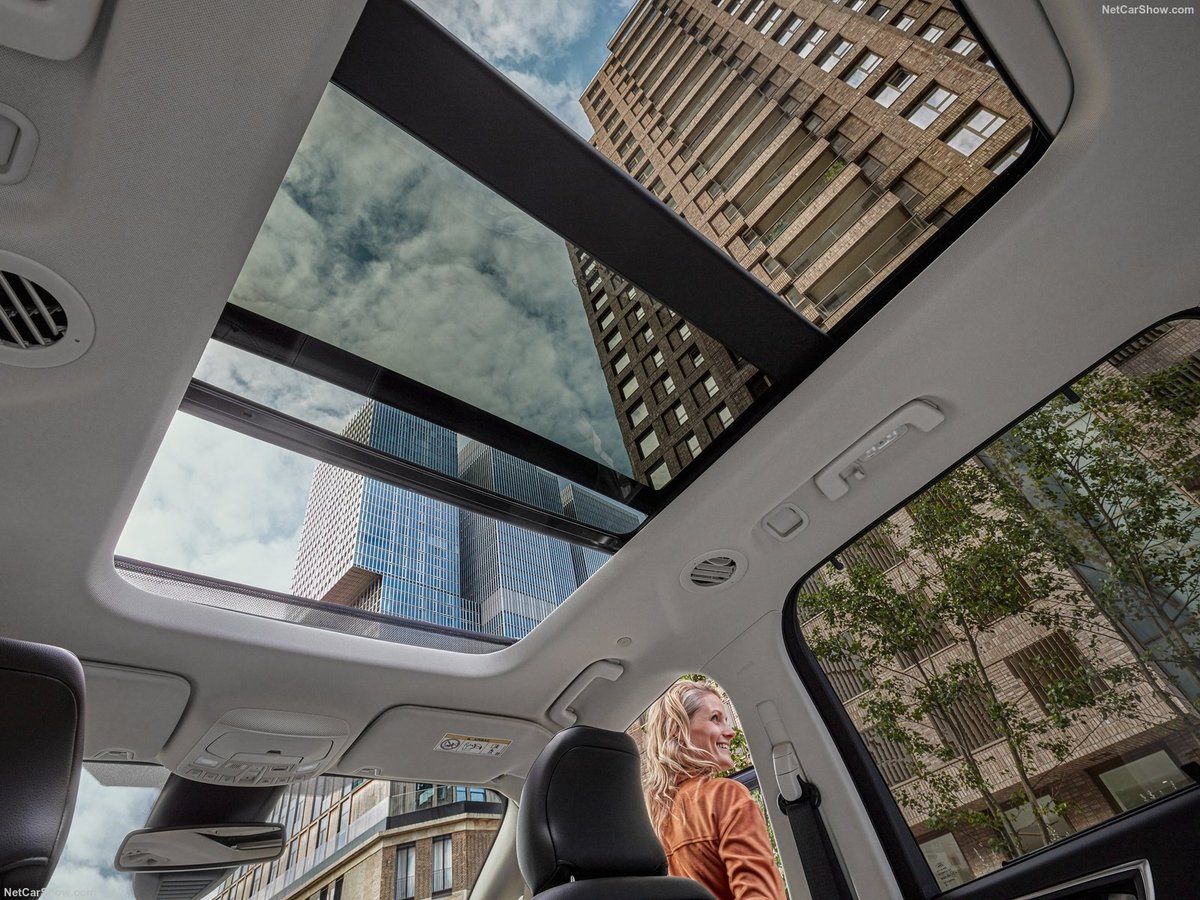 If you opt for the Zetec mode, it’s well worth considering the optional satnav. The panoramic roof is optional on Zetec and Titanium models and makes a big difference to how the Galaxy feels inside.

For Titanium cars, you can spec the ‘Titanium Lux Pack’ as tested, which adds adaptive LED headlights, leather upholstery, heated and electrically adjustable front seats and a powered tailgate. 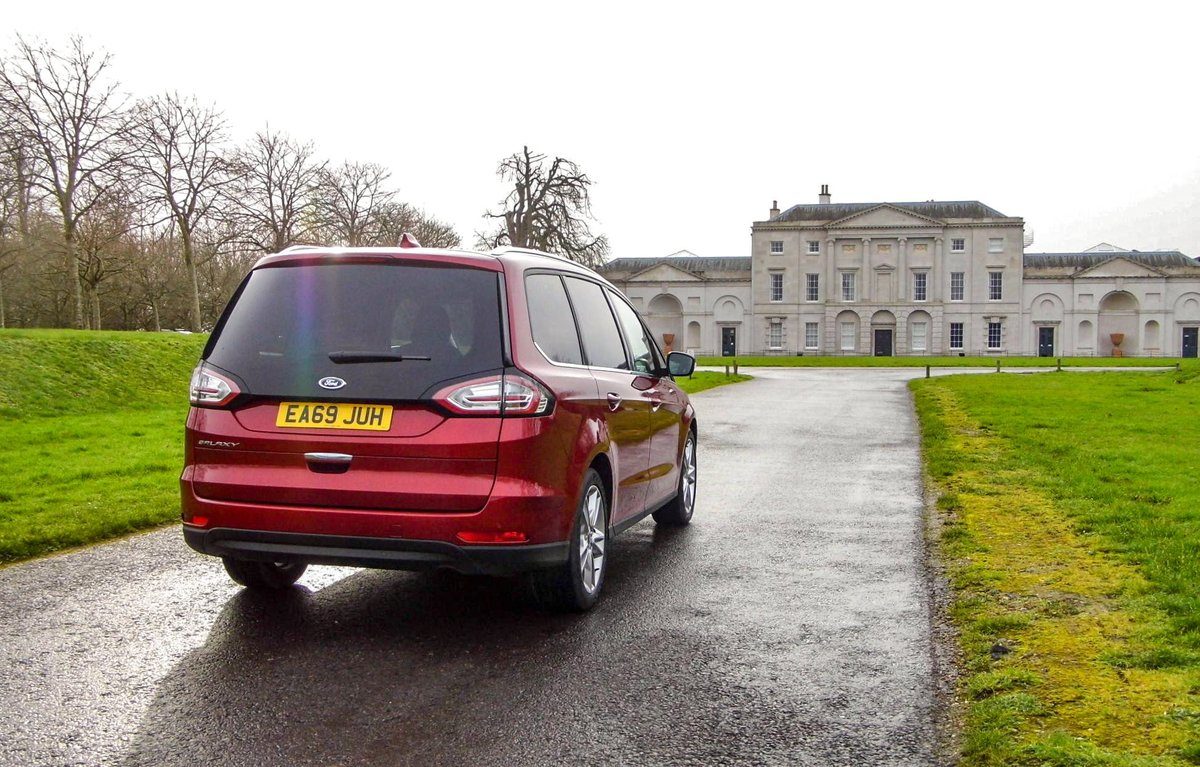 There is just the one four-cylinder 2.0-litre EcoBlue diesel engine offered in two states of tune. The 150hp is the best-selling Galaxy engine and enables 0-62mph in 10.9 seconds with either a six-speed manual or an eight-speed automatic gearbox controlled using a stylish and ergonomic rotary gear shift dial.

The more powerful 190hp version (as tested) of this engine can only be had with a smooth eight-speed automatic gearbox that makes for a becalmed and relaxing drive. You’ll also enjoy the extra power, which ensures decent progress when the car is fully loaded and reduces the 0-62mph to 9.6 seconds. 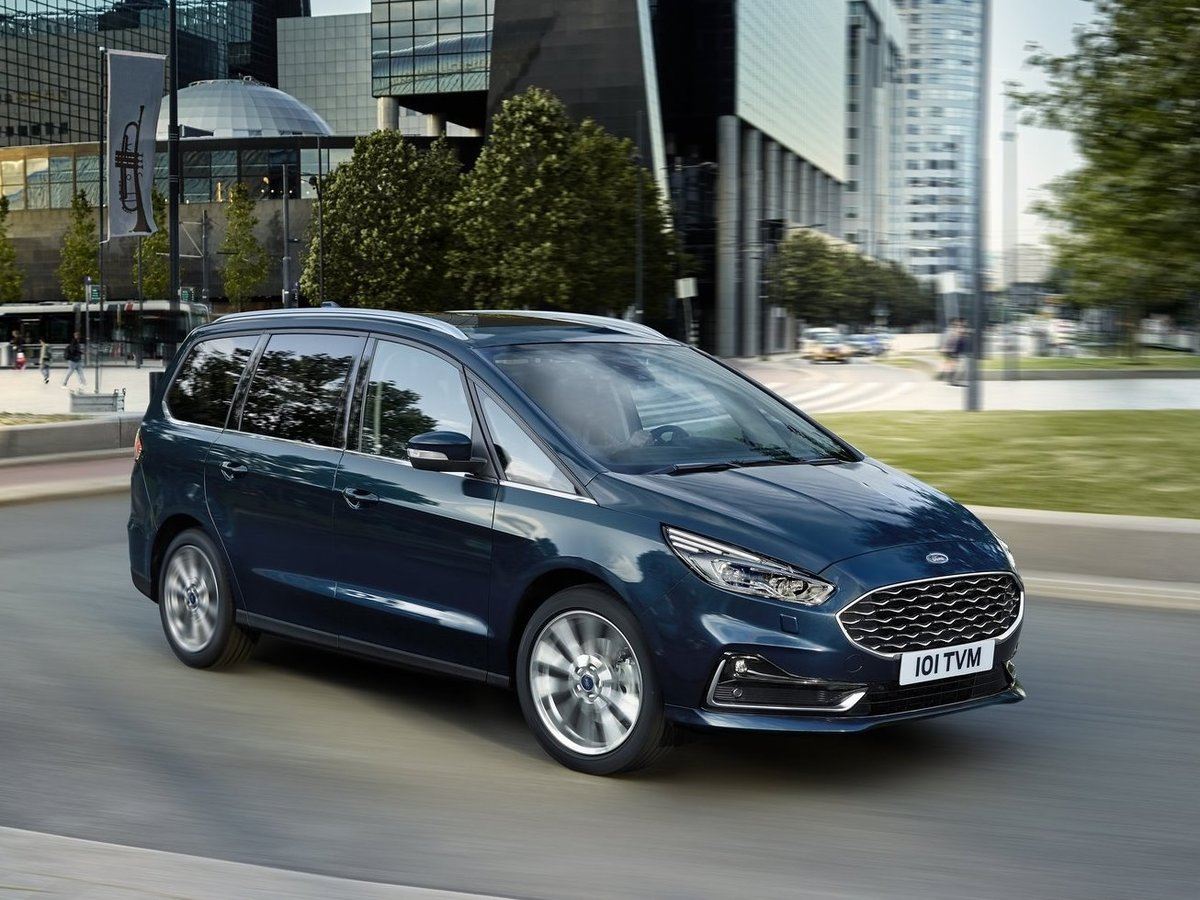 MPVs are usually bought with the head rather than the heart, with emphasis on practicality rather than outright performance. Ford has worked hard to ensure its bulky family cruiser is enjoyable to drive – and they are to be commended for a job very well done.

Passenger comfort is the first priority, though – the Galaxy is very quiet at low speeds and remains hushed on the motorway. The ride is well judged, too – it’s not so soft that it feels woozy and causes motion sickness, but is supple enough to lessen the effect of potholes and bumps in the road. 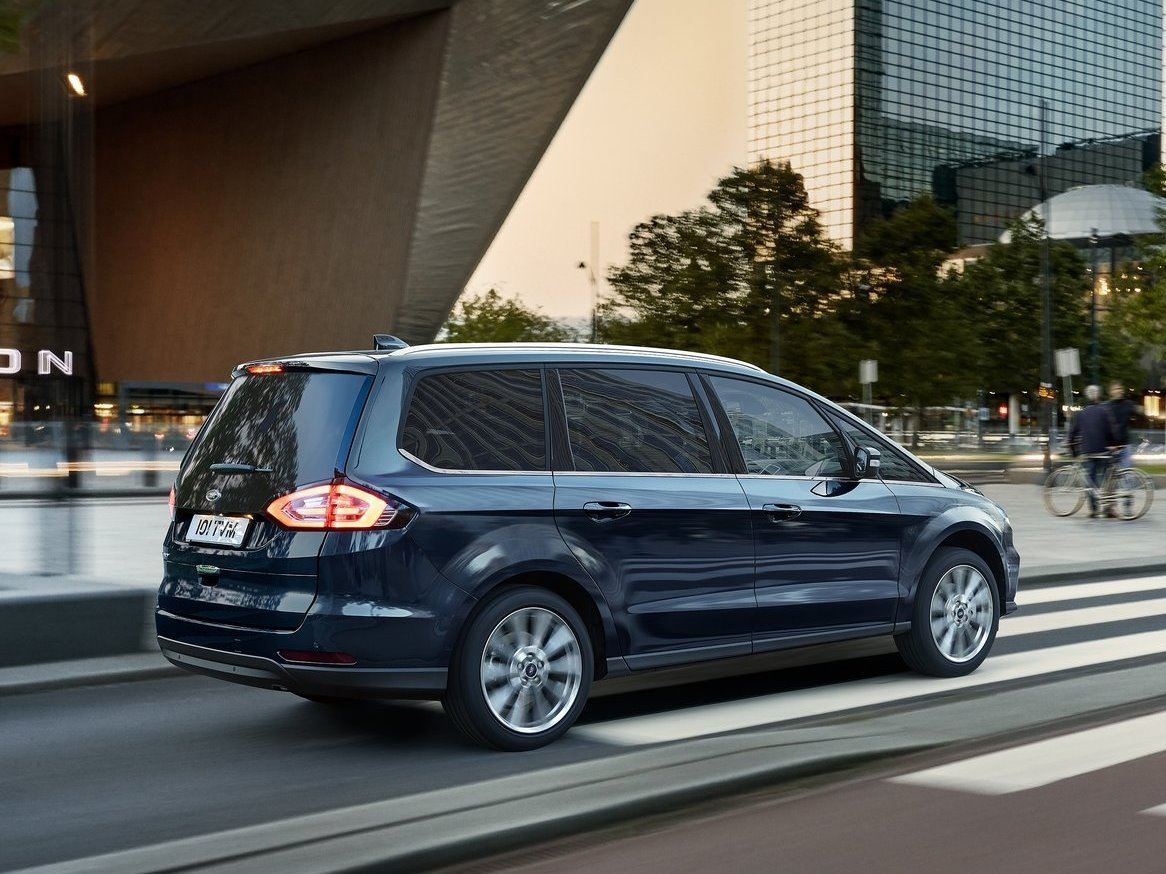 Anyone familiar with the Ford S-MAX will be impressed that the bigger Galaxy feels very similar to drive, with positive, confidence-inspiring steering and a real resistance to body lean, so it isn’t out of its comfort zone in corners where grip is impressive.

True, the Galaxy doesn’t have the responses of a sports car and it always feels large and bulky, but as people-shifters go, its drive is quite impressive.

The Galaxy was awarded the maximum five-star score for crash safety by Euro NCAP when tested in 2015. As well as the usual host of airbags, tyre-pressure monitors and ISOFIX child-seat mounting points on the second row, the Galaxy has an intelligent speed limiter that can scan traffic signs and ensure you never break the speed limit. 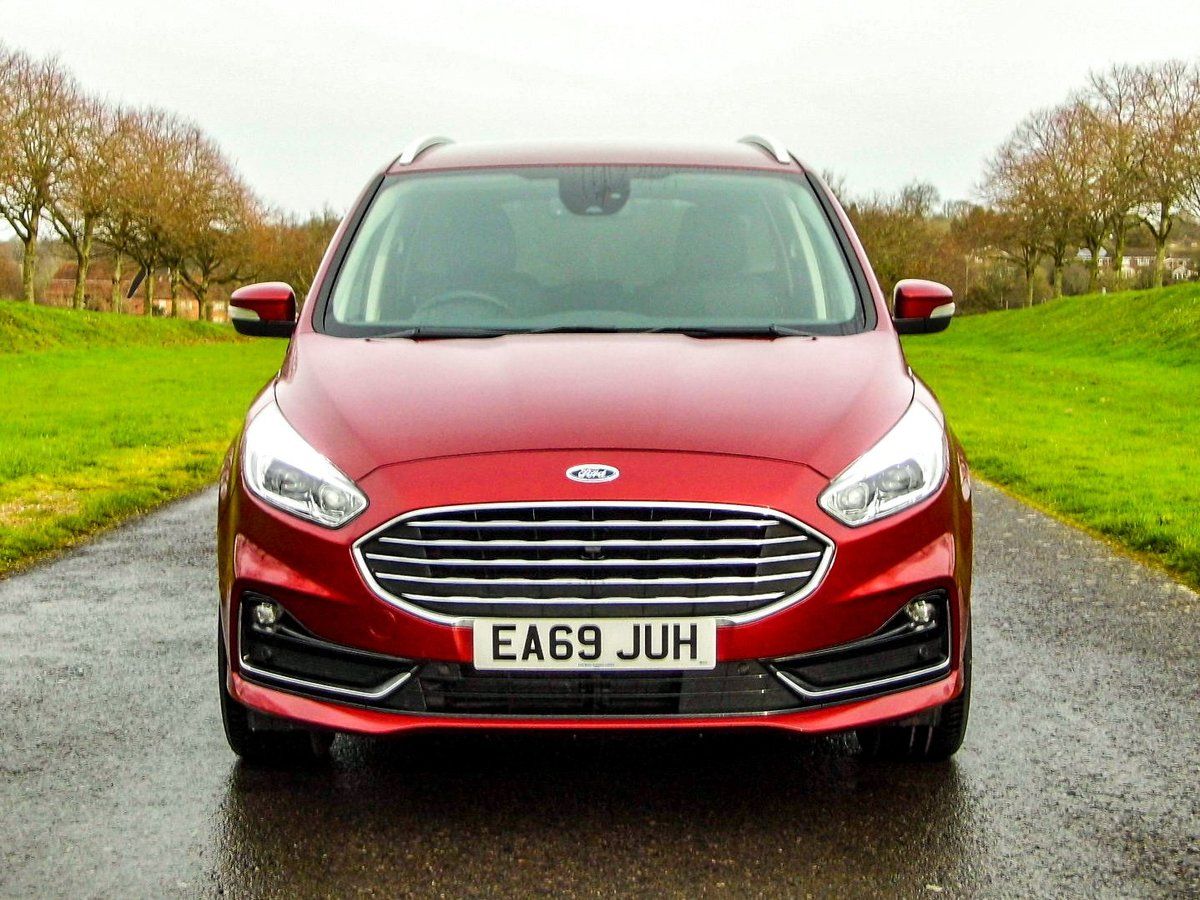 Other safety systems include cruise control and an active lane-keeping assistance function. The automatic braking function can detect pedestrians and other vehicles, while adaptive LED headlights adjust themselves automatically to avoid dazzling oncoming drivers.

Trends in the UK car market have changed much during the last decade, with SUVs taking most of the sales of traditional MPV customers in recent years.

However, the Ford Galaxy is a brilliant large MPV that doesn't impose many compromises. With its huge boot and spacious seven seats, it fulfils the same practical role as rivals such as the Volkswagen Sharan, but is quieter and more composed on the road than the VW.

For the ultimate in practical family transportation, the Ford Galaxy is a very solid choice.

* Browse our top leasing deal on the spacious Ford Galaxy. 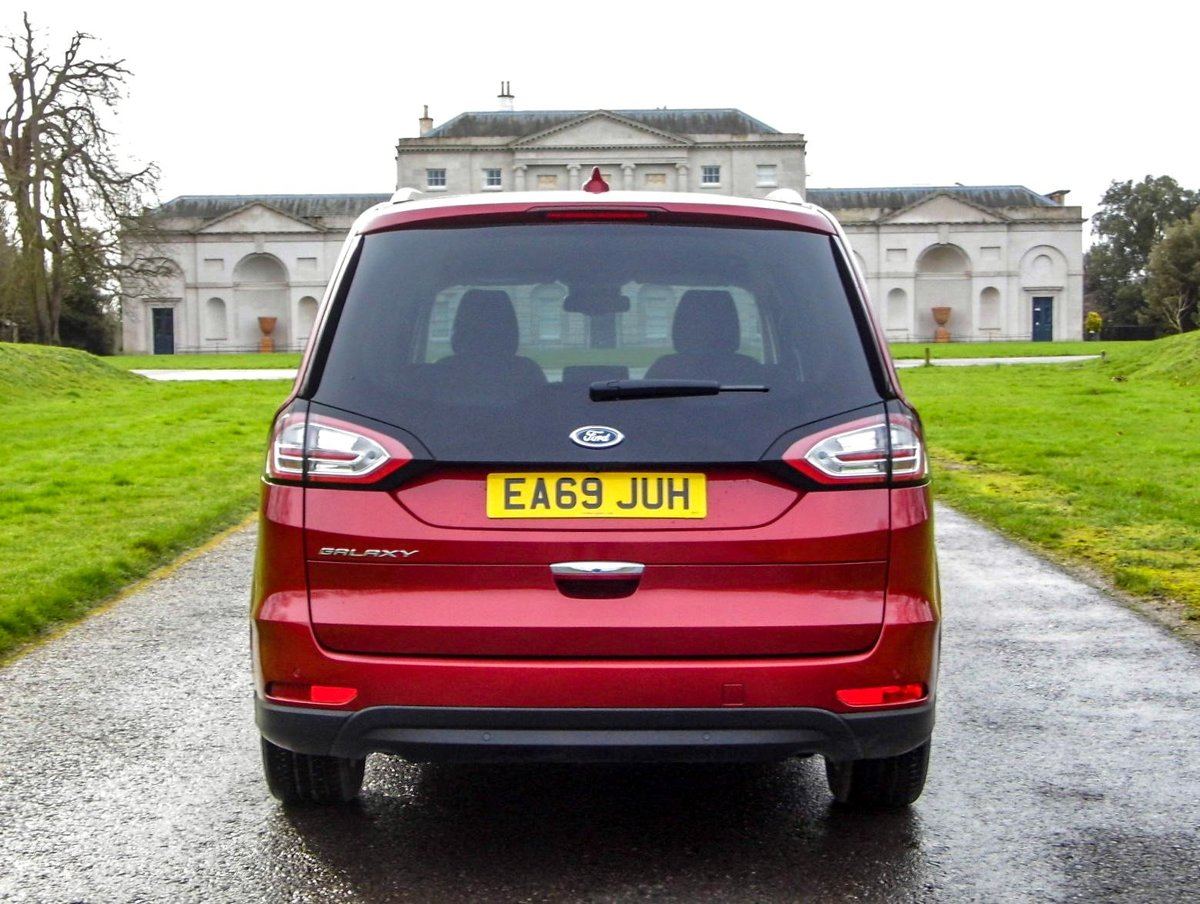 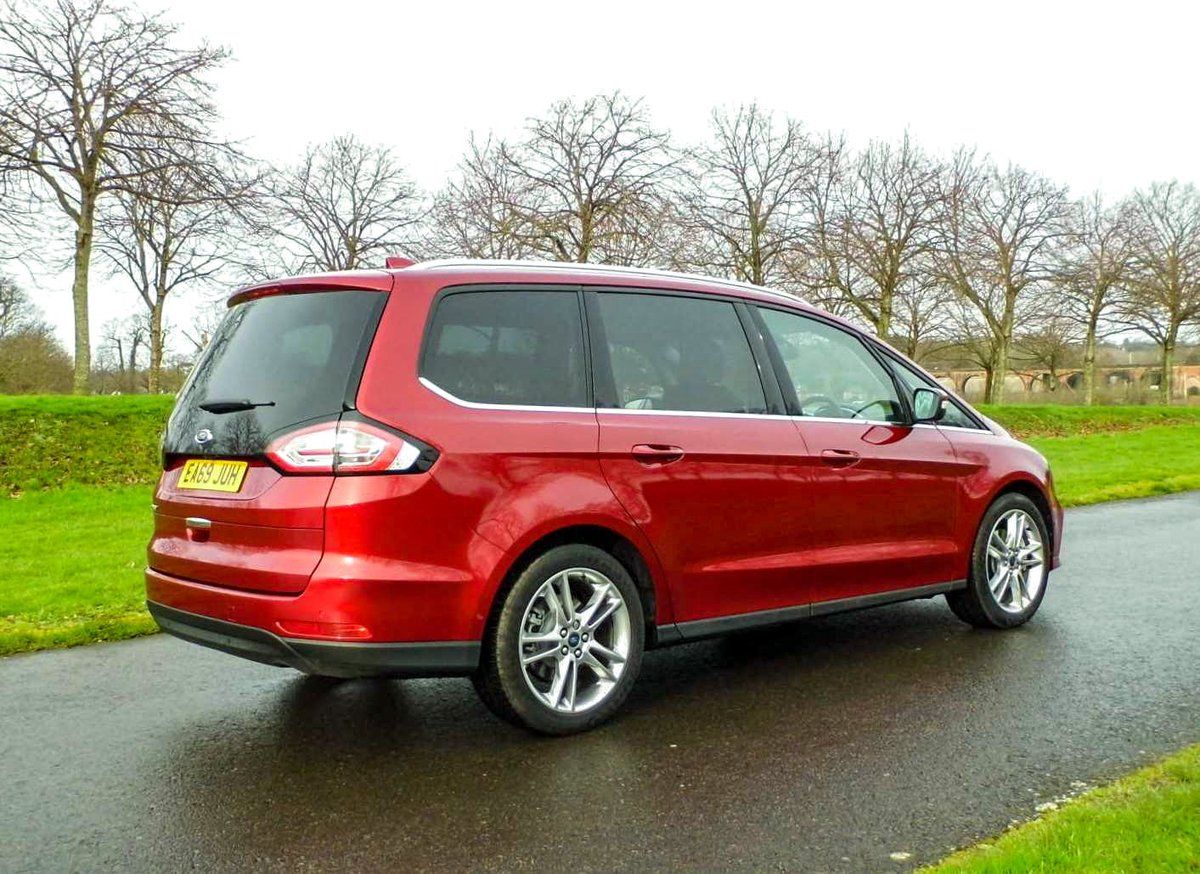