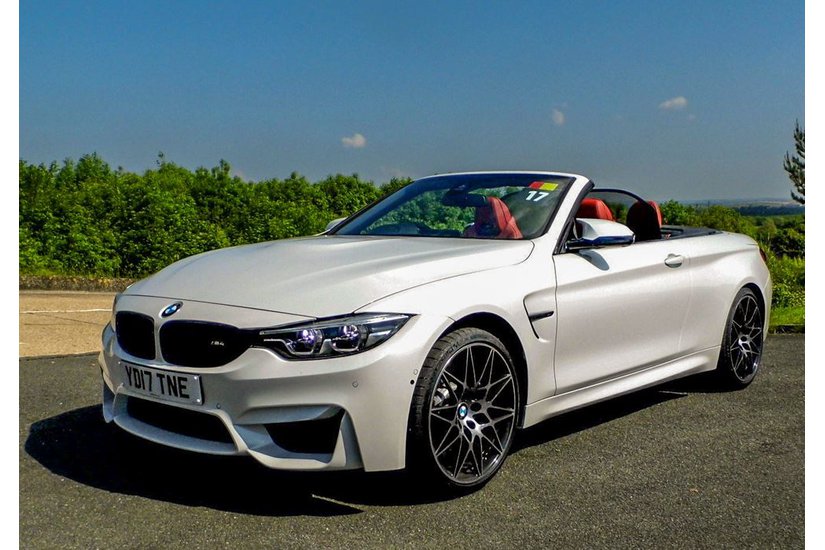 Who doesn’t love a convertible? From the evergreen ‘best-bang-for-your-buck’ Mazda MX-5 through to the feral Hennessey Venom GT Spyder, true topless aficionados know there are many reasons for having one on your driveway – but, bragging rights aside, most reasons are sensory.

Exposed as you are to nature’s elements, there is a the heightened sense of motion, the rushing of passing scenery, the fragrance of fresh, open air as dappled shade flickers over your Ray-Bans. Ah…good times!

The other is all to do with hearing; the arresting dissonance of a well-tuned engine, a gasping turbo or two and a canorous finale via a handsome set of rear steel pipes.

Of course, there’s much more to convertibles that that; stinky buses, sunburn, dust, nosy over-takers, birds keen to demonstrate their exquisite sense of timing and a host of extraneous bug life ricocheting off your wing mirror straight into your teeth. Gotta love it!

My affection for the BMW 4 Series is well documented. Together with the 2 Series, they alone have re-ignited my love for the German car-maker, a love lost many years ago. This week, I pilot the BMW M4 Convertible – with added kick in the form of BMW’s Competition Pack. 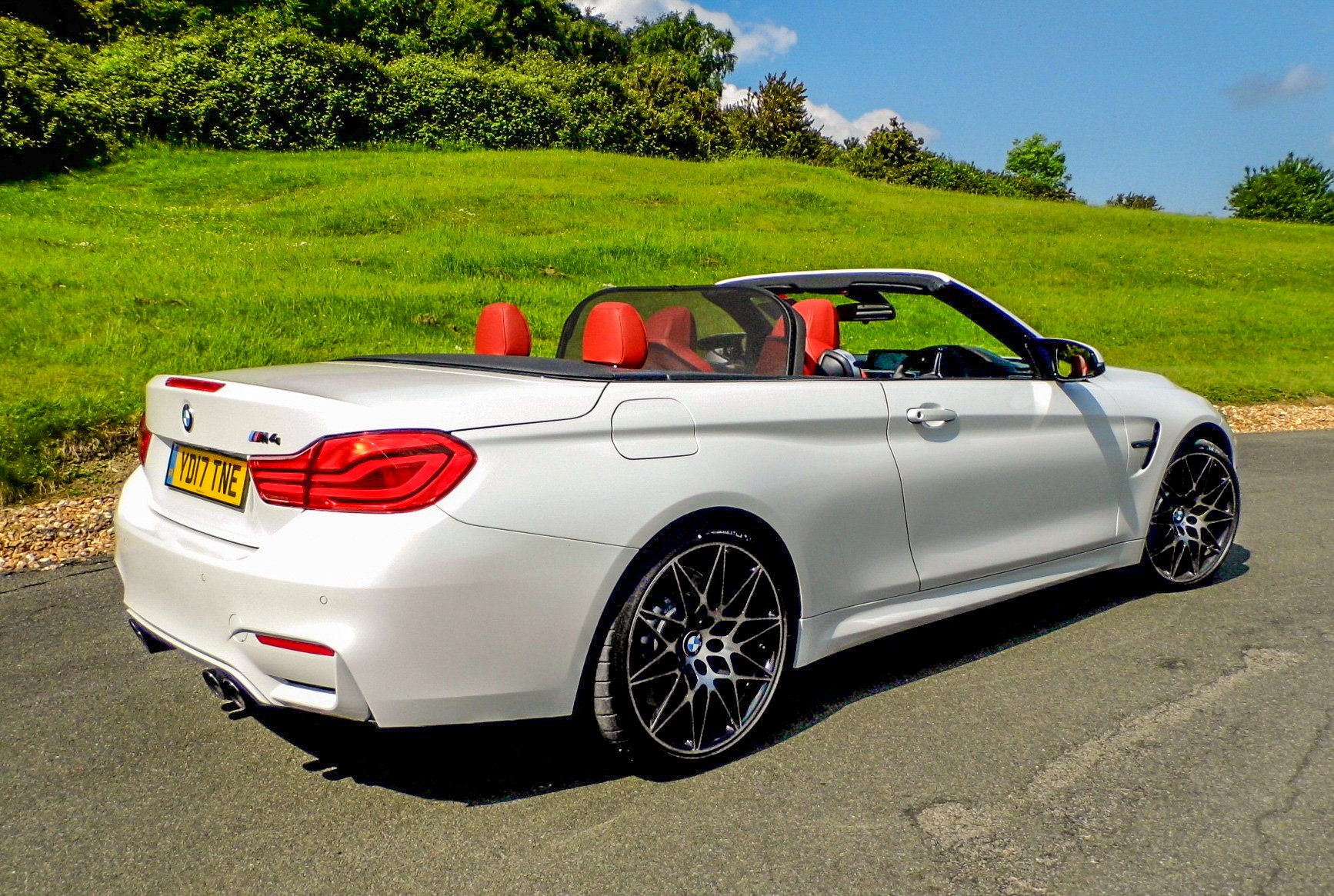 As with any convertible, once the roof of the car is removed, its structural integrity is severely compromised. Engineers must re-engineer the car’s chassis to offset the lost strength and rigidity that a fixed roof brings. How good a job they do determines how much scuttle shake* remains in the car.

It is extremely difficult to engineer out and remains noticeable even on high-end Rolls-Royce and Bentley convertibles, too. As a result, there is a degree of acceptability of it when considering a convertible car. However, strengthening the chassis always brings added weight which can impact on body control, handling and overall performance.

The new BMW M4 convertible is heavier than the coupe, but is still a lot of fun to drive. Its added weight comes partly from the additional folding mechanism for the hard-top roof, but mostly from the necessarily beefier chassis. 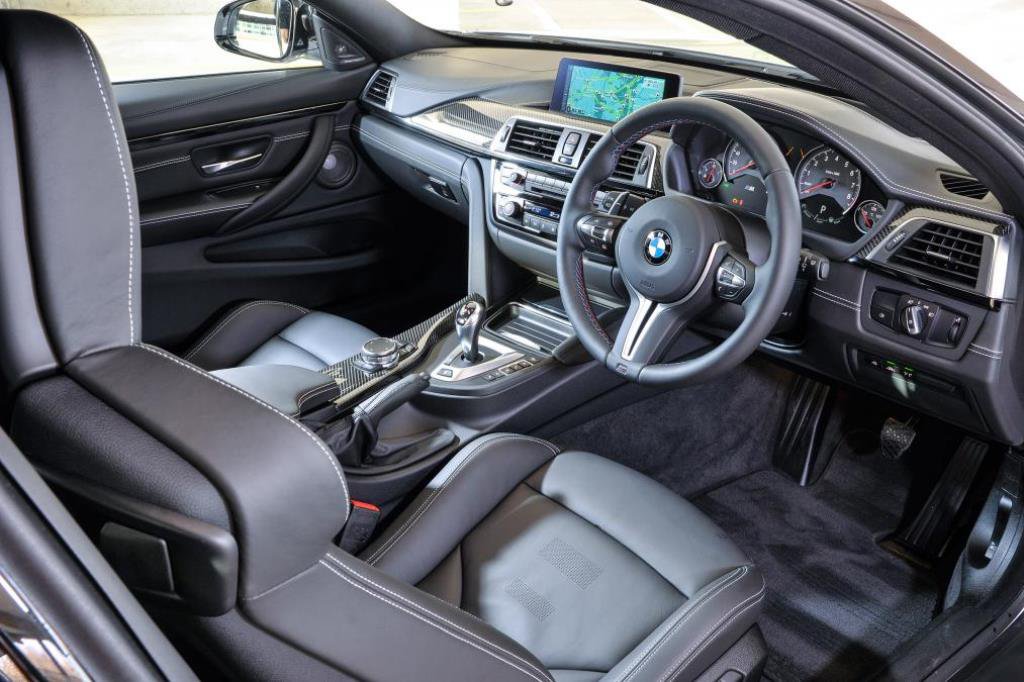 As you would expect of a car returning little change from £60,000, the M4 convertible is very well equipped and jam packed with the latest on-board technology and driver aides. It is available in two trims – the standard M4 and the enhanced M4 Competition Pack.

Invest a further £2,200 for the Competition Pack and your M4 convertible comes with more horsepower, adaptive suspension with Pack-specific springs, dampers and anti-roll bars. There’s also an active M differential with Comfort, Sport and Sport+ driving modes. Inside, there are exclusive front seats with back-rest cut-outs and M colour striped seat belts. It’s all rather tasty, to be honest. 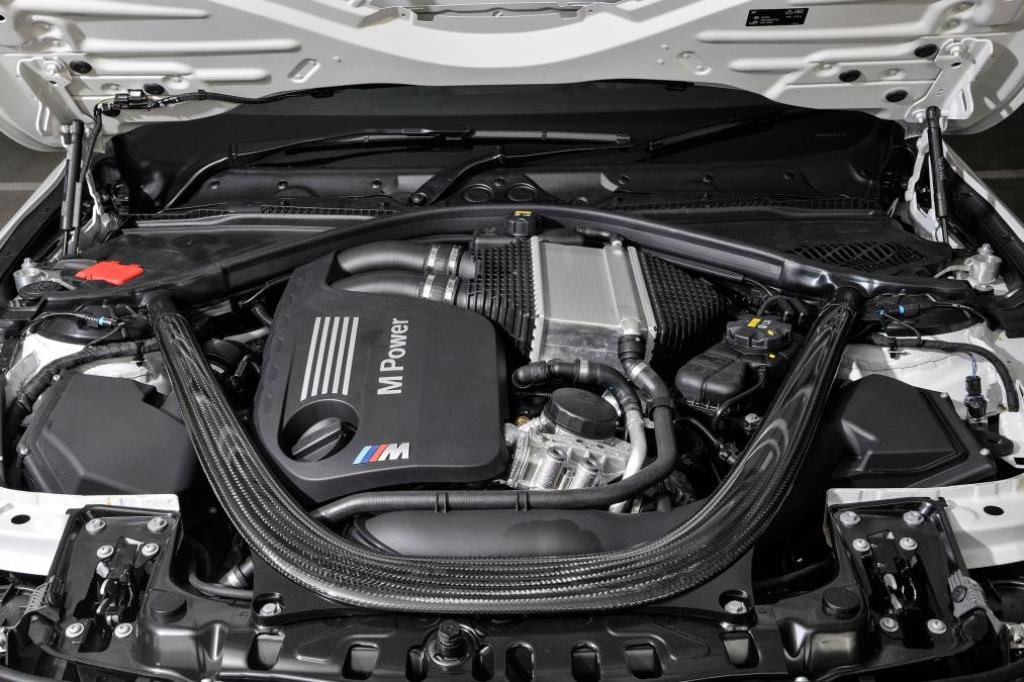 There is just the one engine powering the BMW M4, whether in Coupe or Convertible body style. It’s the same 3.0-litre inline-six engine that’s been powering the M4 from the beginning of its life back in 2014. It’s good for 431hp of pure, pleasurable power and a healthy 550Nm of torque available from a lowly 1,830rpm.

In developing the Competition Pack, M Division engineers squeezed a further 19hp from the engine, offering a nicely-rounded 450hp of brute force while the torque remains unchanged.

The BMW M4 Convertible retains two transmission options - a six-speed manual that comes standard across the unit and an optional seven-speed M DCT (double clutch transmission) as tested. Obviously, both transmissions provide advantages over the other so choosing which comes down to a matter of preference.

On a car of this sporty nature, the manual transmission is always the way to go if you want to control the way your M4 drives. It is much more challenging and the convertible’s performance – and there is a lot of it – is literally in your hands. If you can get the power down, 60 mph arrives in a blurry 4.4 seconds from a dead start.

However, should you wish not to be bothered by all of that, then fork out an additional £2,645 for the optional seven-speed DCT auto. Either left to its own devices or using the flappy paddle gear shifts, it provides premium acceleration off the line during quicker and smoother gear shifts. The DCT will get you to 60 mph in 4.3 seconds from standstill.

In terms of fuel economy – largely an irrelevance on a car of this nature – the manual M4 Convertible Competition Pack returns a combined cycle of 32.1 mpg, while the DCT will average out at a slightly better 34.0 mpg. CO2 rating for the manual-geared model equates to 204g/km, while the DCT emits less at 194g/km CO2. 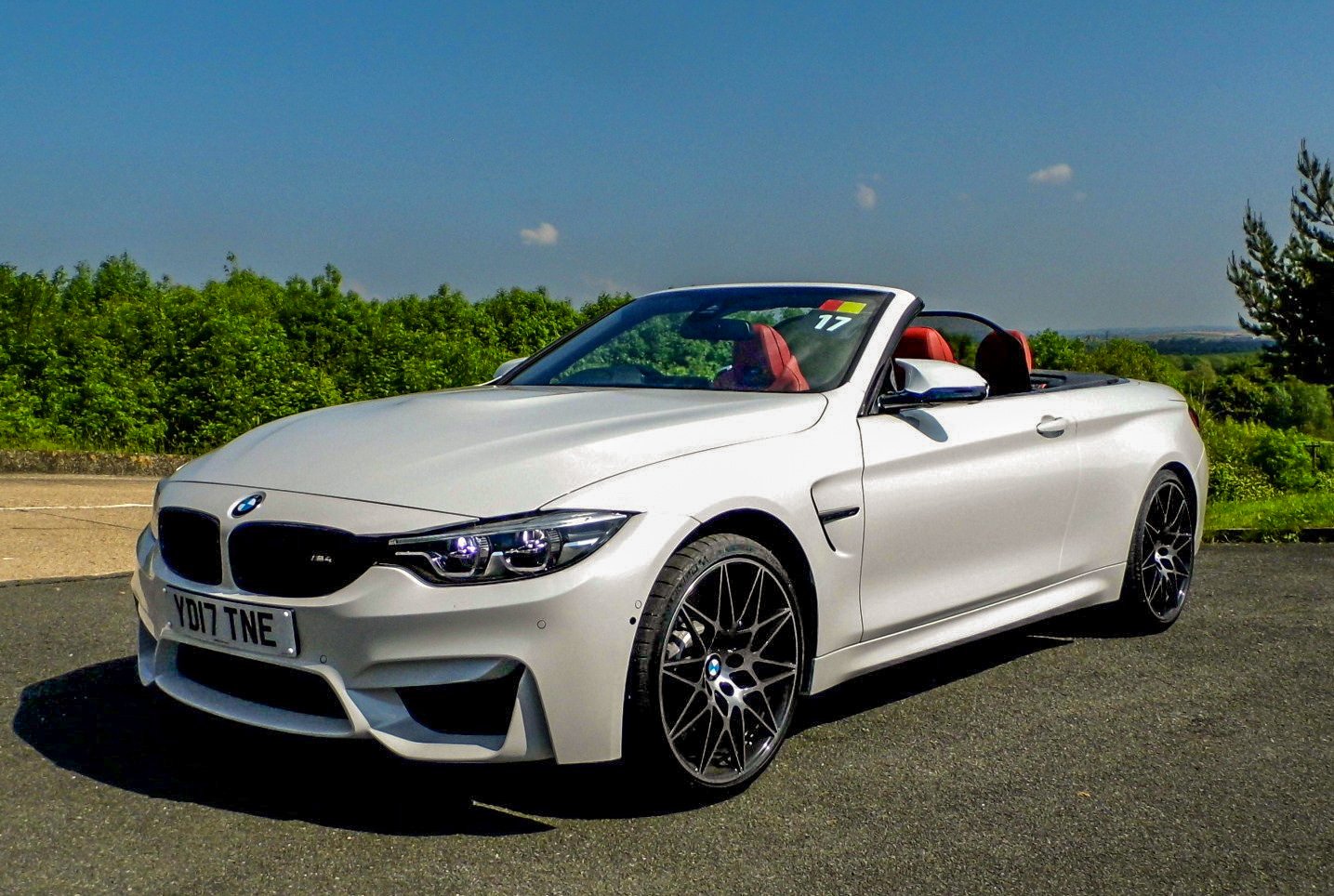 Here is where the M4 Convertible Competition Pack loses some appeal. As a result of the strengthening of the chassis and the folding roof mechanism, the convertible weighs 178kg more than the coupe, which is felt in the way that it drives.

The added mass is ‘always on’ and a smidgen of scuttle shake exists. It all makes the convertible feel far less agile than the coupe, while the steering is incommunicative and lacks the feedback that a driver needs to feel fully confident in the car packing 450 horses.

Despite these flaws, the M4 Convertible Competition Pack is impressively refined. With the roof down, as long as the windows and wind deflector are up, the cabin remains distinctly un-breezy, even at speed.

This is an M car more suited to cruising along a coastal motorway than tackling tricky mountain passes, an activity best left for the M coupe. 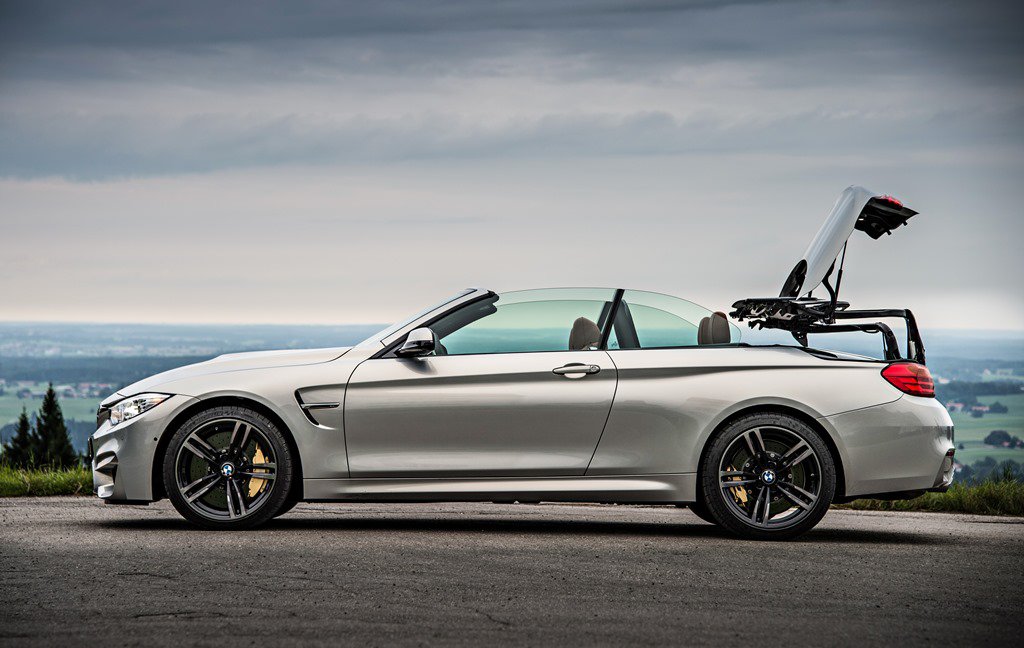 The BMW M4 Convertible Competition Pack shouldn’t have to explain itself to prospective buyers. At the end of the day, it’s a very quick BMW and as such, you can expect it to be built in a world-class manner with features and technologies that few automakers are capable of.

The only question you’re likely to be confronted with is whether the BMW M4 Convertible Competition Pack represents a better deal than the standard M4 Convertible. It’s a wickedly fast and capable car, but it’s not something you can explore the limit without a measurable degree of skill and lots of open space.

As an upgrade, the Competition Pack undeniably improves the BMW M4 convertible. From that aggressive stance and glorious noise, to the great seats and funky belts, it’s a step forward but perhaps a step closer to what the M4 convertible should have been in the first place.

* Scuttle shake is the phenomenon experienced in many convertible or open top cars where, due to lower structural rigidity caused by the lack of a roof, the middle section of the chassis flexes, causing the bulkhead in front of the passenger compartment to move and vibrate when the vehicle is subject to uneven road surfaces. Passengers feel it as a noticeable vibration and shudder.

Summer's here so it's time to take the top down for some wind-in-the-h...