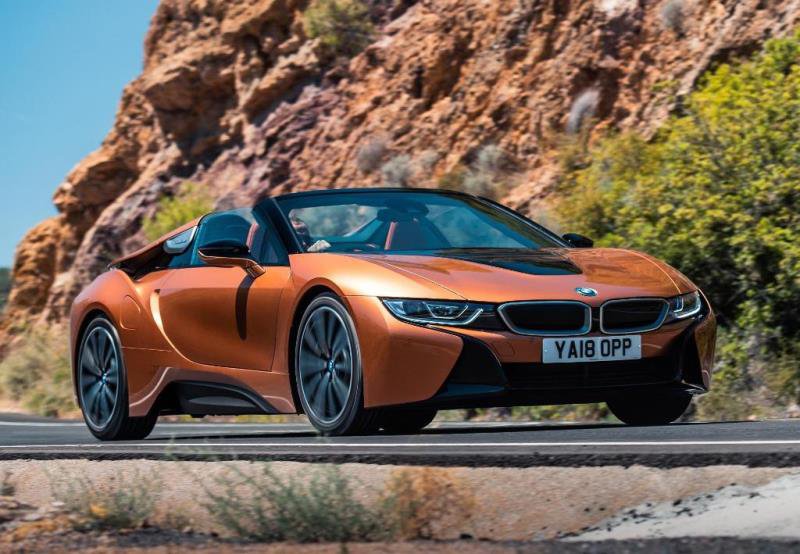 In the immortal words of Freddie Mercury, “It’s finally happened.” After six long years, the open top BMW i8 Roadster has eventually arrived. 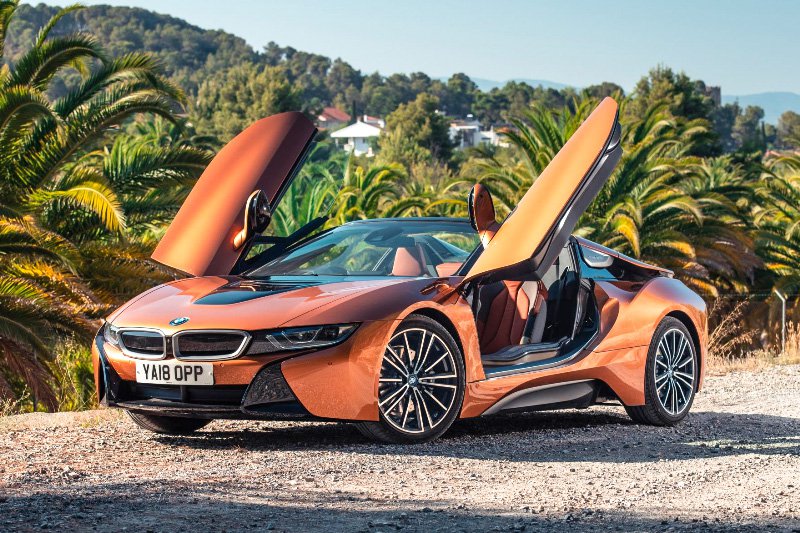 Originally making its debut at the Beijing Motor Show in 2012, the BMW i8 Concept Spyder drew gasps of astonishment for its futuristic styling and advanced (for its time) plug-in hybrid drivetrain technology. Much anticipation awaited its intended launch set for 2015.

Disappointingly, the roofless i8 required further development and was not to see the light of day for a further six years and, in 2015, BMW chose to release the i8 Coupé instead. 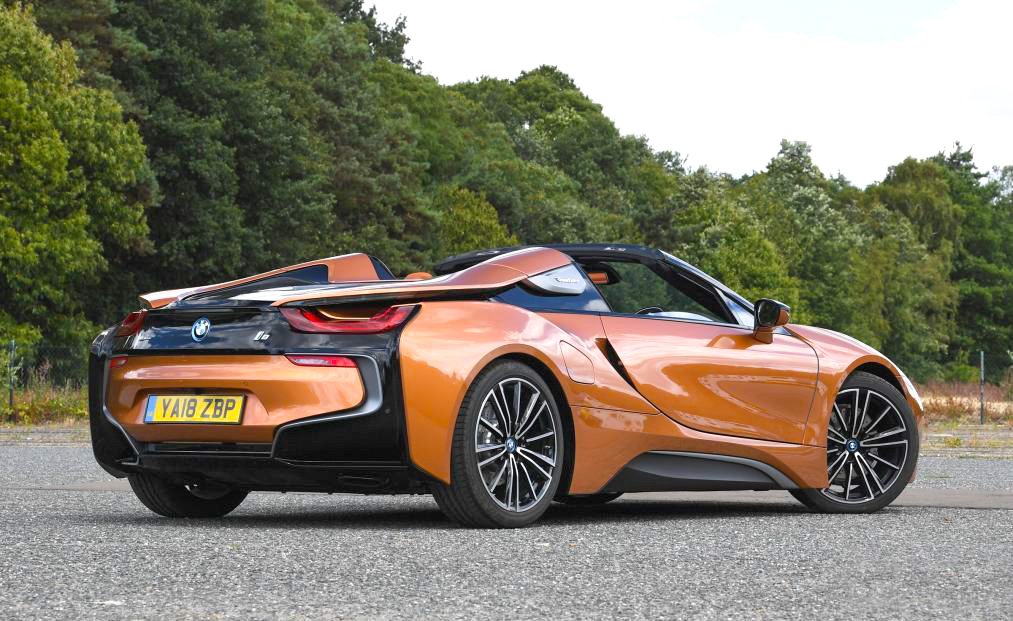 In those intervening years, the open-top i8 has undergone a significant amount of development. But, despite the long gestation, it hasn’t lost any of its original impact created in Beijing.

In the early autumn I was fortunate enough to spend some time in the BMW i8 Roadster, and made a few observations…

Three years on, the original BMW i8 Coupé remains one of the most futuristic-looking production cars in the automotive world. But, exactly how do you make one of the most dramatic looking cars appear even more arresting? Simples…by removing the roof. 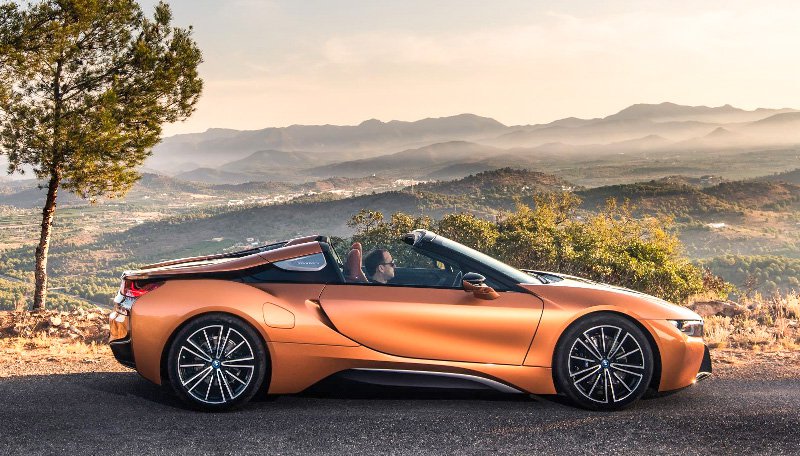 The i8’s futuristic lines are even further enhanced by the loss of its roof, particularly at the rear which has gained added prominence on the Roadster due to the appearance of two large buttresses in the place taken up by the lift-back style tailgate found on the Coupé.

The roof, which consists of a large fabric panel and integrated header rails, opens automatically in 15 seconds at speeds up to 30mph. It boats near-silent, full electric operation and stows vertically behind the two-seat cabin at the press of a button, nestling in a space-saving position between the rear bulkhead and mid-rear mounted combustion engine. 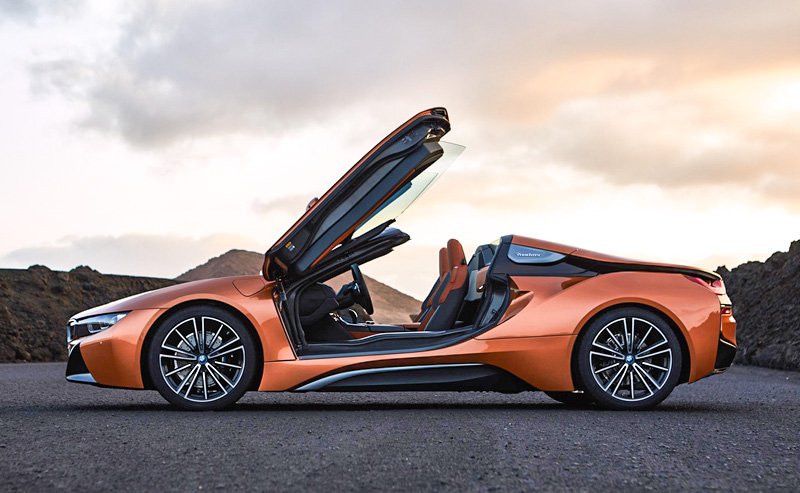 To accommodate the new soft top, BMW has modified the windscreen of the i8, providing it with a strengthened carbon fibre frame. The rear window, which doubles as a wind deflector, is also altered and can be closed or opened independently of the roof.

Further stylistic changes over the facelifted i8 Coupé include the removal of the rear side windows, which have been replaced by new panels overlaid with aluminium-look trims with 'Roadster' decals either side of the new buttresses. 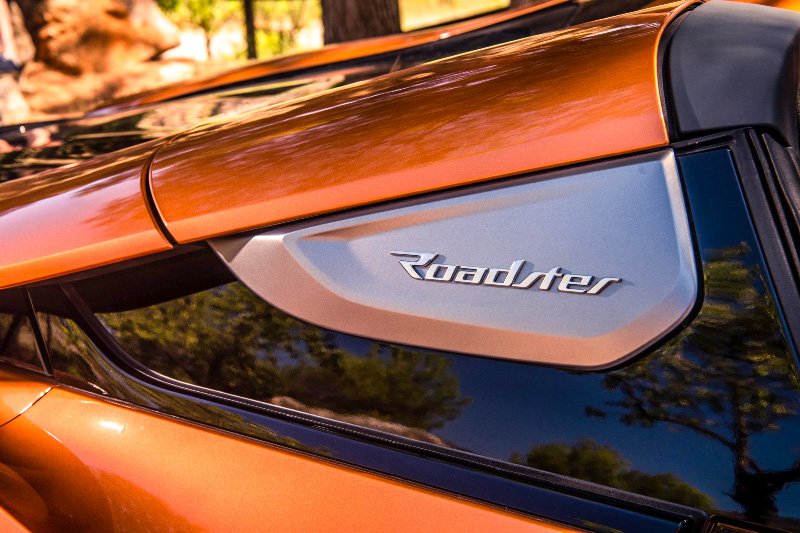 The drama continues when lifting one of the i8’s dihedral doors to reveal an equally stylish interior.

The earlier dashboard design has been lightly updated for the i8 Roadster and facelifted i8 Coupé. Among other subtle changes, the latest version of BMW’s iDrive system now offers either touch control on a free-standing 8.8in monitor or (more safely) via a rotary dial on the middle console. 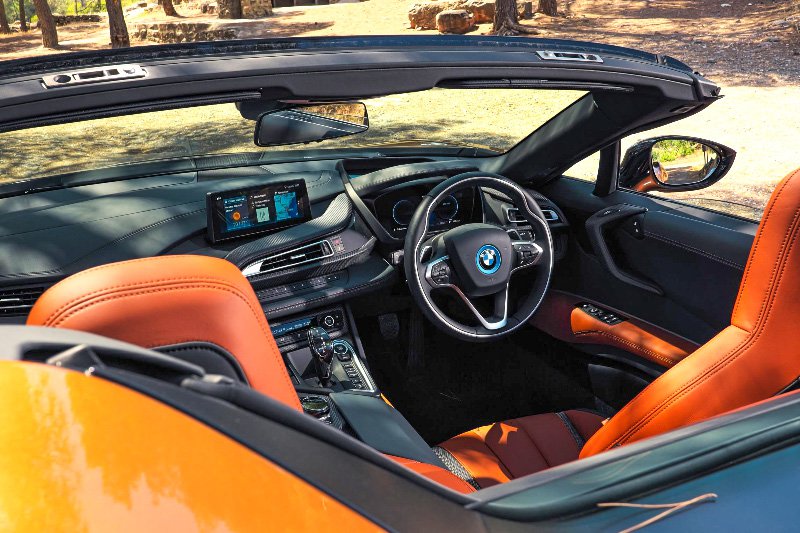 The i8 Coupé may technically be a four-seater, but the rear pews are only good for children, minor hand luggage or a pair of BB-8s. 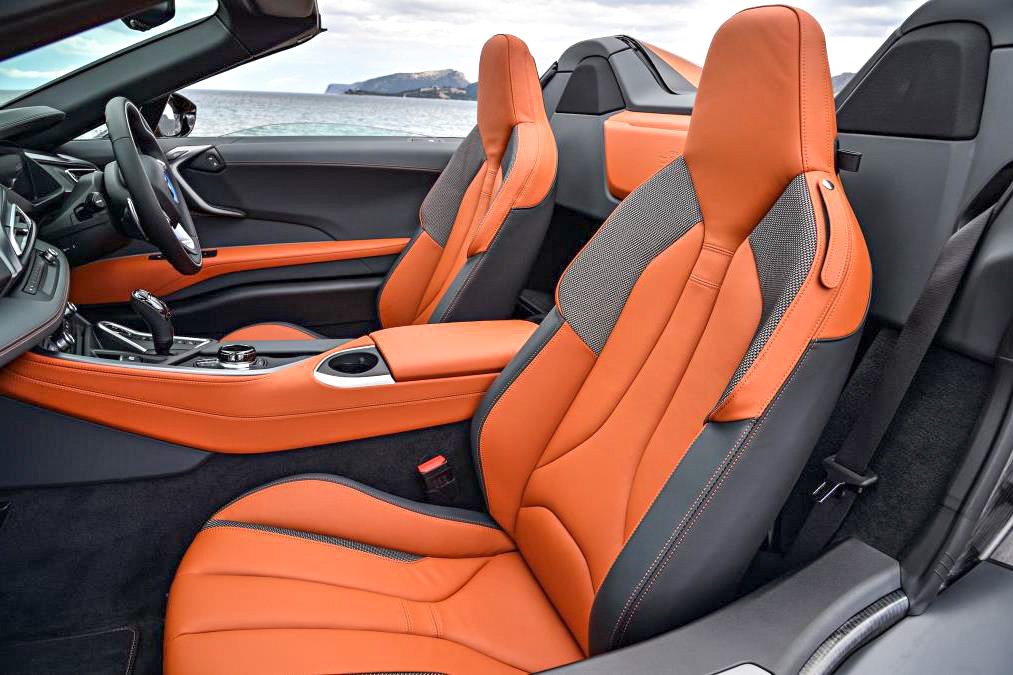 It’s no great loss that the new Roadster loses the Coupé’s rear ‘seats’ and instead offers a more usable luggage storage shelf that’s big enough to carry three large soft bags. Combine this with an extra storage bin under the BMW’s engine cover and you actually get slightly more luggage space in the Roadster than in the hard-top. 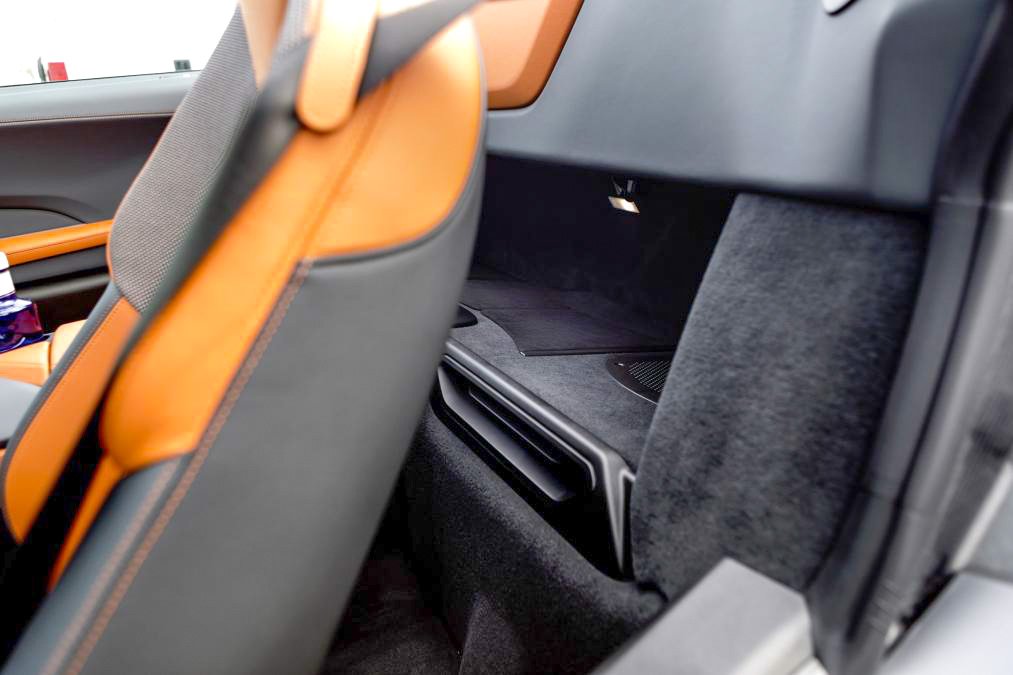 Identical to the Coupé, however, is the Roadster’s cabin design. It’s simple, minimalist layout means everything’s easy to use and plenty of plush leather and brushed metal trims make sure it feels super posh inside, more so than its Porsche 911 and Audi R8 rivals  You also get one of the most intuitive infotainment systems around and a cool digital driver’s display instead of conventional analogue dials as standard. 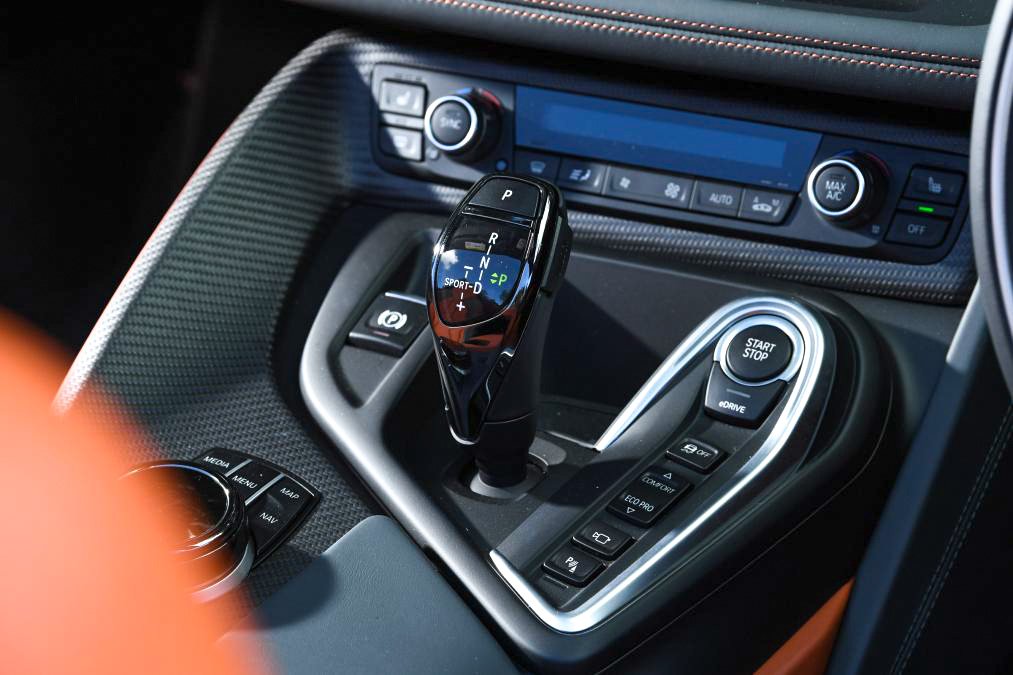 Unlike other BMW models, trim options for the i8 are made up of fixed-price 'interior worlds'. However, standard kit is expansive with top-flight infotainment, leather furniture and dashboard, DAB radio, ambient lighting and heat-insulated glass. A set of 20-inch alloy wheels is standard, as are adaptive LED headlights, with 'laser light' headlamps optional. 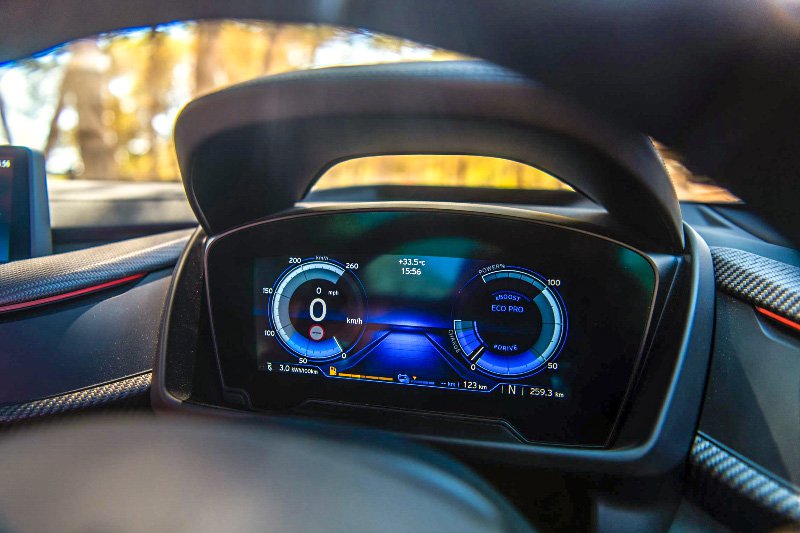 Other high-tech features fitted as standard include automatic emergency braking that’ll perform an emergency stop if it detects an obstacle in the road ahead. The i8 hasn’t been crash-tested by Euro NCAP, but features such as this help make it a very safe sports car, and one of the very best hybrid performance cars on sale.

The i8's combined petrol and electric power plant is rather different to other plug-in hybrid models, as it emphasises the electric side of things, with the petrol engine there to keep the batteries charged and provide extra thrust when needed.

In pure electric mode, the 141bhp electric motor sends power to the front wheels, allowing a top speed of 75mph and a range of up to 30 miles before the petrol engine powers in to rescue proceedings. 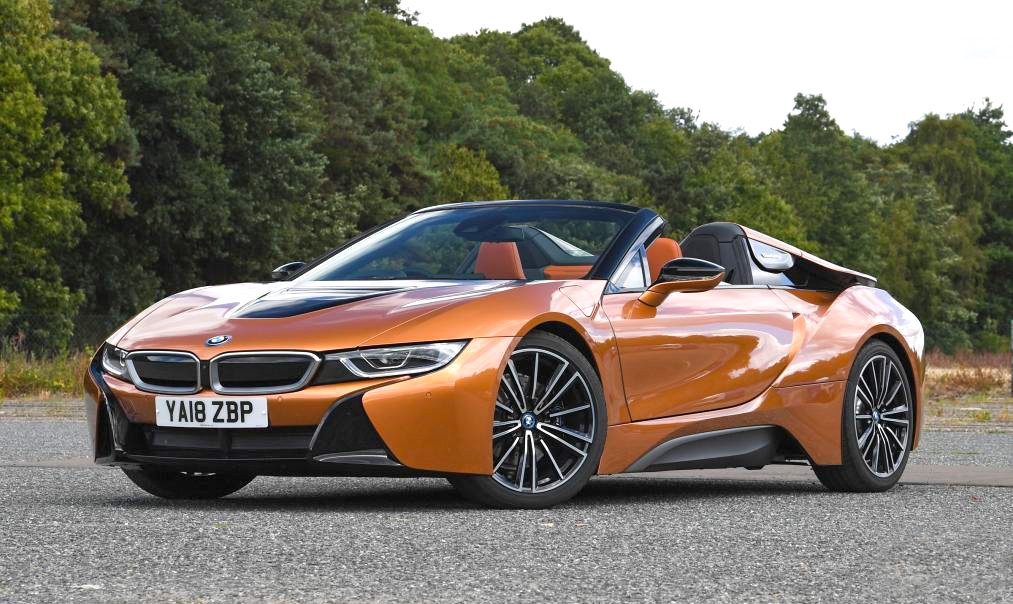 Electric power rather dominates the driving experience, but that isn't necessarily a bad thing; in fact, the seamless and immediate way it delivers its power makes urban driving a pleasant and satisfying experience.

The petrol engine is a 1.5-litre, three-cylinder turbocharged unit borrowed directly from the MINI hatchback. It adds an extra 228hp to proceedings when required – enough for a thoroughly sporty 0-62mph time of 4.6 seconds, topping out at a limited 155mph where it's safe and legal to do so. 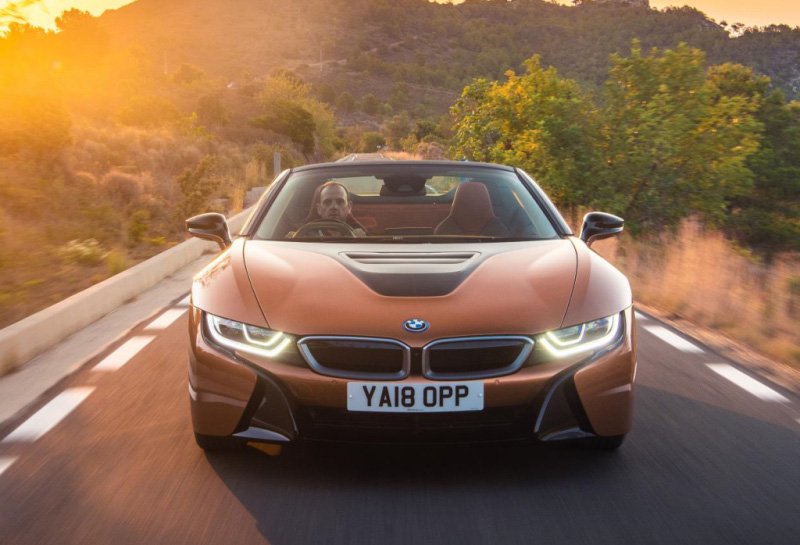 The i8 doesn't make the kind of great noise a Porsche flat-six or Audi V10 does, but its three-cylinder engine burbles along nicely while its turbocharger whooshes away as required.

The i8 Roadster emits just 46g/km of CO2, so monthly company car costs are astonishingly low. Don’t expect to get near the claimed average of 134.5mpg on a regular basis, though, unless you’re running almost exclusively on electric power – which, incidentally, can be easily done if you have a short, sub 12-mile commute and a recharge facility (3 hrs to full) at the office.

The i8 combines stonking performance with the eco-friendly traits normally associated with a Toyota Prius. In Comfort or EcoPro mode, the i8 will try and run on electric power alone, which it can do for around 30 miles. 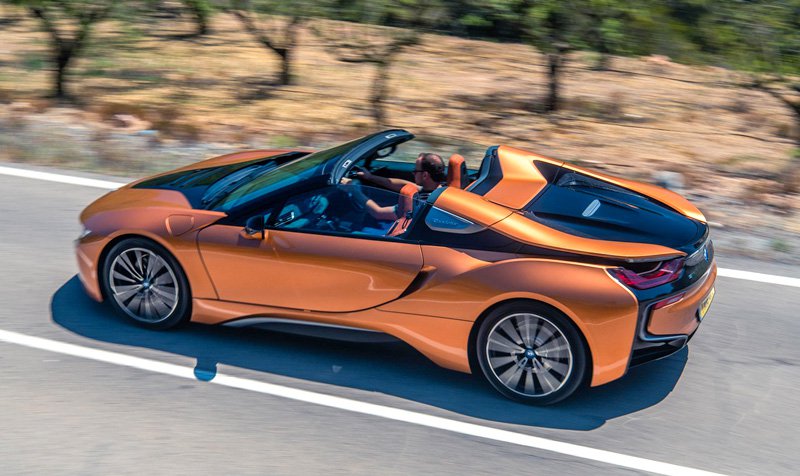 On the handling front, the i8 Roadster follows the Coupé's example in that, the electrically driven front wheels add traction in corners while the petrol-driven rears provide the lion's share of effort. The result is a car that can cover ground very quickly indeed, even when the road get twisty and more entertaining. There's not much lean in corners, either, thanks largely to the i8's heavy battery pack being located low in the chassis. 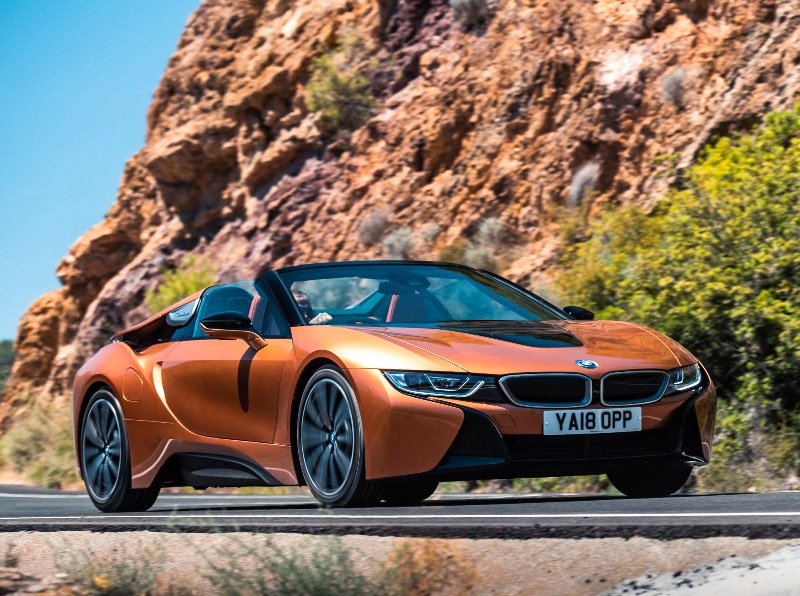 The Roadster also benefits from an evolution of the i8's suspension, with adjustments to the springs and dampers for a more accurate and easily placed front end, with less of a tendency to run wide if you carry too much speed into a corner. It's not quite enough to counter the rather artificial feel through the wheel, though – until you’re used to it, there's a weird disconnect between the steering and the road that feels a little alien.

However, you quickly learn that the i8 is very obedient and well composed during those more spirited moments behind the wheel. Its limit becomes apparent when comparing it directly to, say, the Mercedes-AMG GT Roadster, Porsche 911 Cabriolet and Audi R8 Spyder, all of which encourage drivers to explore both their own and the car’s limits. 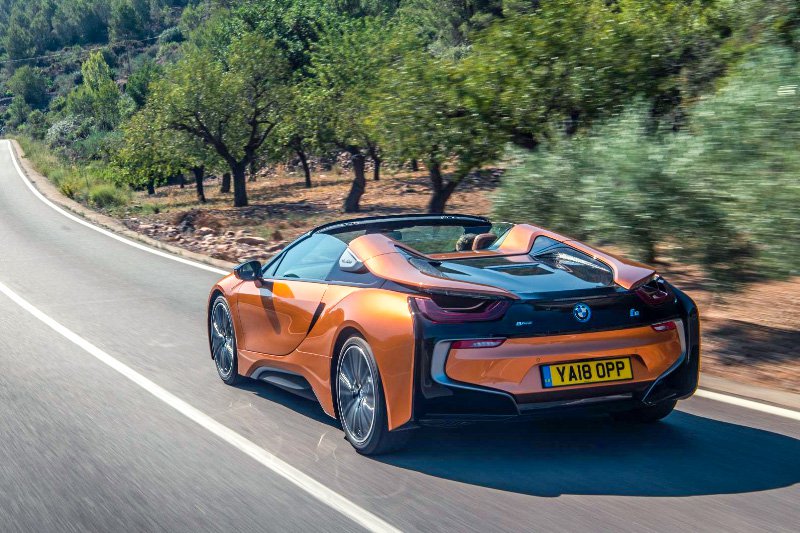 The i8 isn't like that – it doesn't invite tail-happy dalliances like the BMW M4 and, ultimately, will naively run wide in corners. Mind you, you'll need to be going very fast indeed before that happens.

After a tenuous start, the BMW i8 Roadster has finally arrived and it’s It offers a unique prospect if you’re looking for a fast, dramatic – yet unusual car.

To buy an i8 Roadster, you’re going to have to have a strong desire to adopt its USP of being the only plug-in hybrid sports convertible on the market. You’re also going to have to accept that while it’s certainly an enjoyable thing to drive, it’s far from thrilling.

While the i8 Roadster will appeal to those who appreciate its technology, style and conspicuous presence, there are other drop tops that offer more for a driver and charge a lot less for the privilege.