The BMW 6 Series officially ceased production in 2018. But it’s sort of back and this time it’s very grown up and has a new name: the all-new BMW 8 Series.

The chaps in Munich suggest that the new 8 Series not be considered a replacement for the old 6 Series, as the 8 Series sits higher up the scale in terms of cost and capability. Right you are, then. 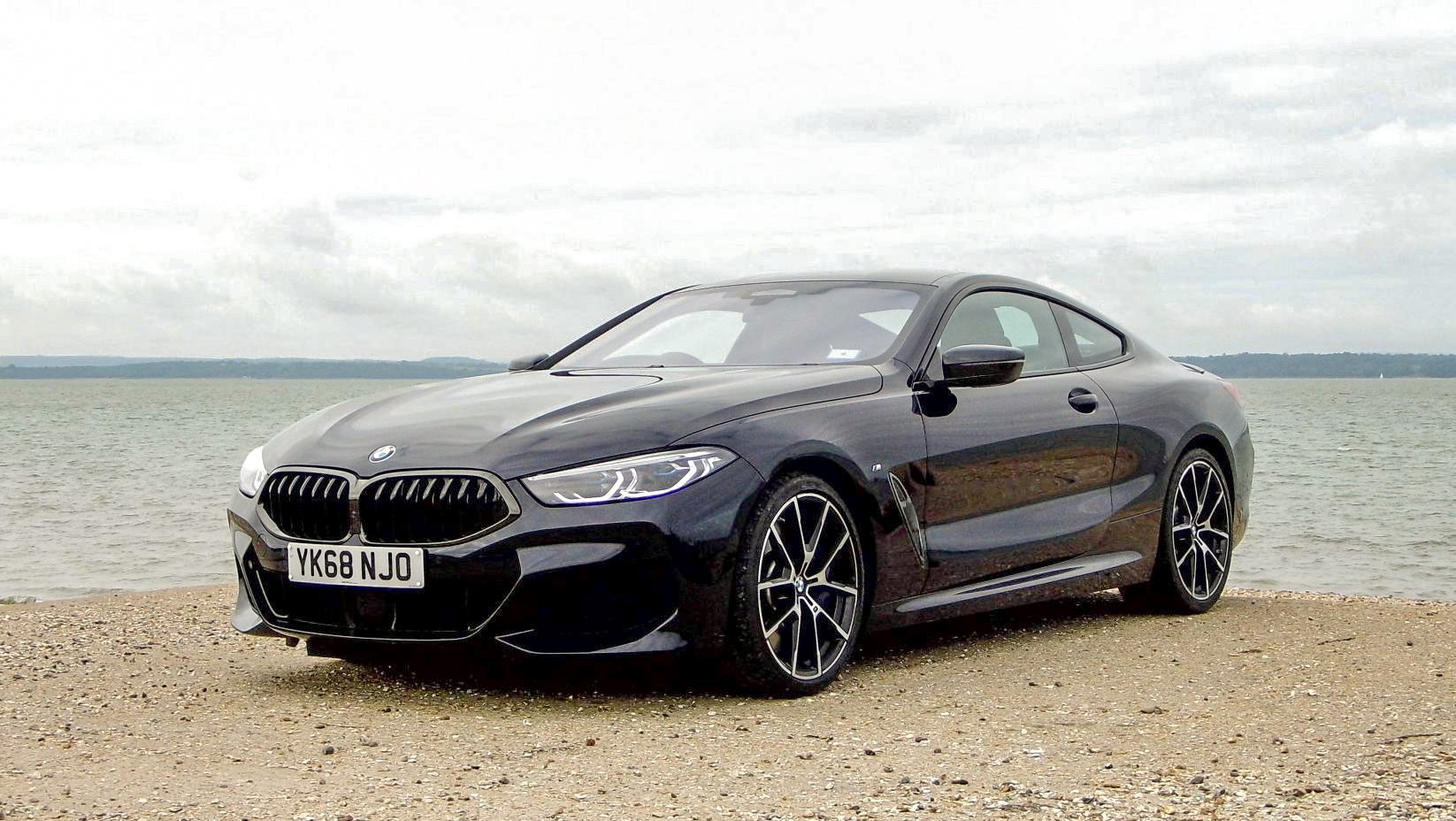 The first BMW 8 Series was in production from 1990 to 1999. Almost twenty years later, the Coupé iteration was announced last summer and went on sale in November 2018. It was quickly followed by the soft-topped Convertible and the five-door Gran Coupé was announced just this week. (We’ll bring you more details of that in our Leasing Lounge on Monday.) There will also be M8 versions of all three body styles…hhnnngg. 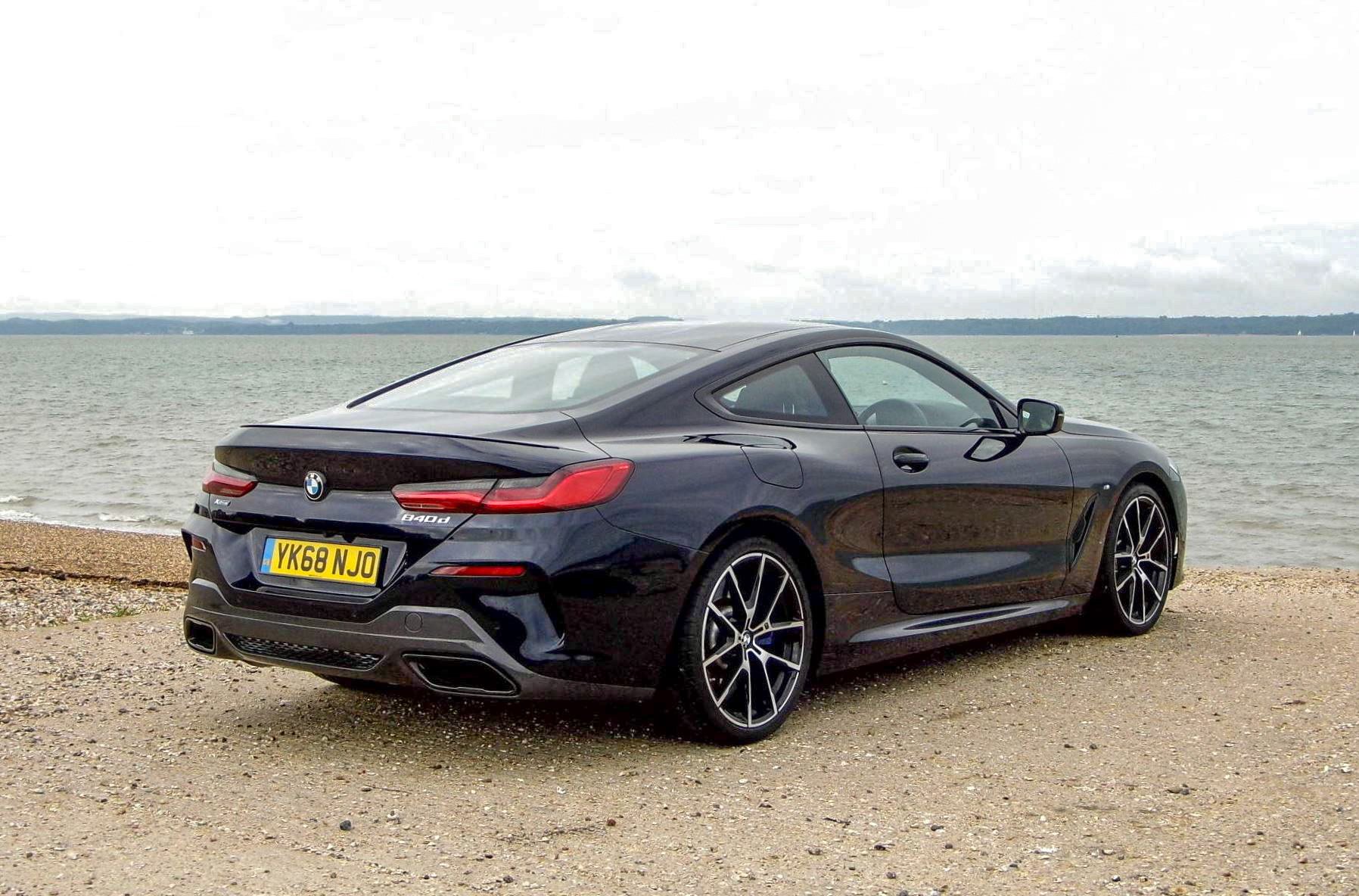 Courtesy of BMW UK in Farnborough, I spent most of last week with NJO, an 840d xDrive Coupé, presented in Carbon Black, which, when the sun shines on it, isn’t black at all…but rather a deep, rich blue. And lovely it was, too.

Outside, the new 8 Series Coupé wears the new Shouty McShouty face of BMW, more angular and big-grilled than ever. The new model is slightly shorter than its 6 predecessor and it’s wider and lower, too, which sharpens the drive somewhat.

The sides are sculpted and chiselled and the rear shoulders broad. Should you wish, you can spec the roof to be in carbon fibre and it has a double-bubble section as it tapers downwards. All-in-all, the new 8 Coupé offers striking and elegant lines. 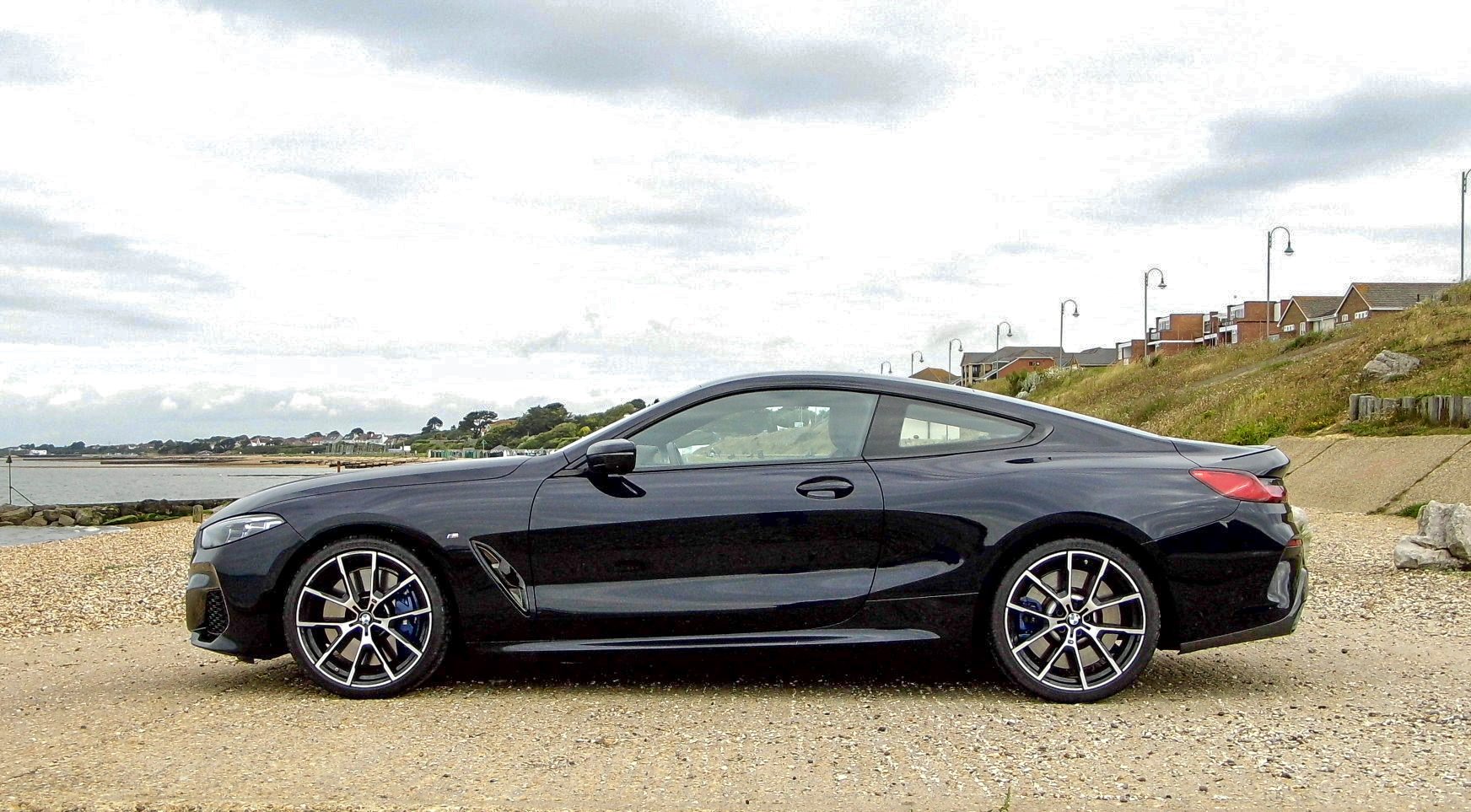 Having taken in the sleek exterior, it would be safe to expect things to be equally dramatic on the inside. Not so. Here, you’ll find an interior that seems a lot like a more plush 5 Series. There is far less drama than found inside the new Porsche Panamera and Mercedes S-Class Coupé, for instance.

That said, it’s still all good, make no mistake. BMW has always focused on restrained interior visual design, preferring to focus on outright build and material quality over showiness and it’s here that the 8 Series excels. From the stitching on the leather dashboard to the numerous brushed chrome trim pieces, everything looks and feels cohesive and tactile. BMW’s latest-generation iDrive 7.0-inch touchscreen infotainment system is currently the best on the market, being responsive and easy to operate on the move thanks to an intuitive rotary controller. It works in conjunction with a 12.3in digital instrument display that’s standard across the range.

Up front, there’s all the space you would expect of a high-end grand tourer, with plenty of head and leg room for a couple of tall adults. However, there’s very little leg room in the rear and that attractive sloping roofline restricts head room to the point where only children would be happy sitting in the back – but probably not for long. If the truth be told though, the rear of the 8 Series is far more suited to a couple of weekend bags than they are to humans of any description.

When you are only two-up in the 8 Series, it is highly unlikely that you’ll be looking for more luggage space as the car has one of the most accommodating boots in its class. With 420 litres behind the rear seat uprights it's not only more practical than, say and S-Class Coupé, but many mainstream family hatchbacks, too. There's plenty of room for luggage even before you lower the 50:50 split-folding rear seats. These fold via levers inside the boot and the powered boot lid can be opened and closed 'hands-free'. The boot opening itself is rather narrow and awkwardly shaped, but (top tip) you'll find soft-luggage a lot easier to accommodate than rigid cases.

As you would expect from a brand’s flagship model, every 8 Series is lavishly equipped, with only the most specialist of features reserved for the options list.

Outside, you'll find 19-inch alloy wheels on the 840d (as tested), and 20-inch alloys on the M850i. Both 8 Series models get full LED headlamps as standard, which are the slimmest ever fitted to a BMW. As well as all the heated, leather seats, electric adjustment and ambient lighting functions, there is a long list of driver assistance features are fitted as standard, too. Autonomous emergency braking (AEB) has the ability to detect cyclists in your path. Along with adaptive cruise control and lane keeping assist, the technology forms the basis of BMW's 'Personal Co-Pilot' system, developed to make motorway driving safer and easier.

On the options list, BMW's laser light headlights are available, along with Parking Assistant, which can identify suitable parking spaces and automatically manoeuvre the car into them. The M Sport Technic Package is tempting, and likely to become sought-after on used examples. It includes larger M Sport brakes and a limited-slip differential, as well as M Sport-specific styling touches to the steering wheel, seatbelts and headlining. The BMW 8 Series is rare among luxury two-door coupés in offering buyers a diesel option but the 840d with its 316hp 3.0-litre straight-six certainly has the torquey muscle – all 680Nm of it – worthy of its 'sporty' billing. From a dead start to 62mph takes just 4.9 seconds, with an electronically limited top speed of 155mph.

Although 'diesel' and 'sports coupé' might not read like a match made in heaven, this laid back but muscular engine makes plenty of sense in this instance. Its acceleration feels entirely effortless thanks to the seamless way the automatic gearbox changes gear. It does mean the 840d has a rather different character to the M850i, though, and has less to offer those who drive for the sheer thrill of it. Little surprise then that the sportiest 8 Series models are petrol powered. As mentioned, there's an even hotter M8 in the pipeline, but the M850i really ought to satisfy all but the most power-crazed. Its twin-turbocharged 4.4-litre V8 petrol engine develops 523hp and makes a sonorous roar while doing so. The M850i takes just 3.7 seconds to do 0-62mph and it’s also electronically limited to 155mph

An eight-speed automatic gearbox is standard. There's no manual option but you can override the gearbox using steering column mounted shifters, and it responds to inputs immediately. Left to its own devices, automatic gearshifts are quick so smooth they would be almost impossible to detect were it not for the engine noise.

There's no getting away from the fact that the 8 Series Coupé at 1,890kg is a large, weighty car. At nearly five metres long and two wide, the BMW is hard pressed to match the lighter Porsche 911 for agility, but it certainly doesn't disgrace itself. Take a corner at speed and the 8 Series feels more taut and poised than its Mercedes-Benz rival, and there is lots of fun to be enjoyed on a challenging twisty road – even more so if you engage the Sport driving mode (which you should from time to time).

This stiffens the suspension, sharpens up the steering and quickens the throttle response. It also introduces a (synthesised) exhaust note with (artificial) pops and bangs, offering more sensorial engagement. However, while the Sport mode’s extra sharpness provides entertainment in enjoyably brief doses, the Comfort mode is most agreeable as it’s far more 'every day' without sacrificing much in the way of composure in corners. The BMW's resistance to body lean is particularly impressive, while the 19-inch tyres (20” on the 850i) have massive reserves of grip. Although there's no real giveaway that the car is four-wheel rather than rear-wheel drive, the way it grabs hold of loose or damp surfaces even under hard acceleration is both impressive and reassuring.

At the time of writing, there is no Euro NCAP independent crash test data for the new BMW 8 Series. However, as one of the German marque’s flagship models, it comes loaded with all the safety kit you can imagine. There aren’t many cars on the road that can boast a similar array of cameras and sensors intended to create a protective monitoring zone all around the car. It boasts a full complement of passive and active safety technology, including intelligent active cruise control, lane-keeping assistance and emergency autonomous braking.

The large windscreen head-up display (no tacky raised see-through plastic here) should help to keep the driver focused, in spite of the potential distraction of the car’s impressive infotainment screens. The basic structural engineering of the 8 Series, with its hyper-rigid carbon core platform, will protect you and yours should the worst happen. I covered a little less than 460 miles during mixed road and drive-mode testing and realised 42.4mpg (91 per cent of the official 46.3) and averaged 35.7mph.

If you’re in for a large continent crusher, with handsome rakish looks yet decent access and a sensible boot, you’ll find it hard to better the 840d xDrive Coupé – especially with a 40mpg+ diesel engine that’ll let you cruise 600 miles on a tank. Your bladder will need emptying before the tank needs filling.

At nearly five metres long, the 8 Series takes up as much road as a big saloon, so it’ll rarely – if at all – feel truly agile. But there’s the effortless drive, the relaxed ride, the luxury aura and the cabin space to compensate.

Yes, I would. But I’d have a close look at a couple of equally worthy rivals, too.