Since the first BMW 5 Series debuted back in 1972, there have been around 5.6 million sold and, even today, approximately 17 per cent of all BMWs driven away from the forecourt have nomenclatures beginning with ‘5’.

With its sights aimed squarely at the Mercedes-Benz E-Class, Jaguar XF and the current Audi A6, the BMW 5 Series is a similarly large executive saloon that offers all the luxury and clinical build quality expected from a premium German manufacturer. Now in its seventh generation and lighter, more powerful and more efficient than its predecessor, the latest (G30) 5 Series remains focused on BMW’s core values of driving pleasure and performance.

First revealed in October 2016, sales of the current 5 Series commenced in early 2017 and, now that the dust is a little more settled, I recently spent a week with this stalwart of the executive saloon sector – the BMW 520d presented in M Sport trim. It would be unprofessional to gush, but goodness me, it was worth the wait. 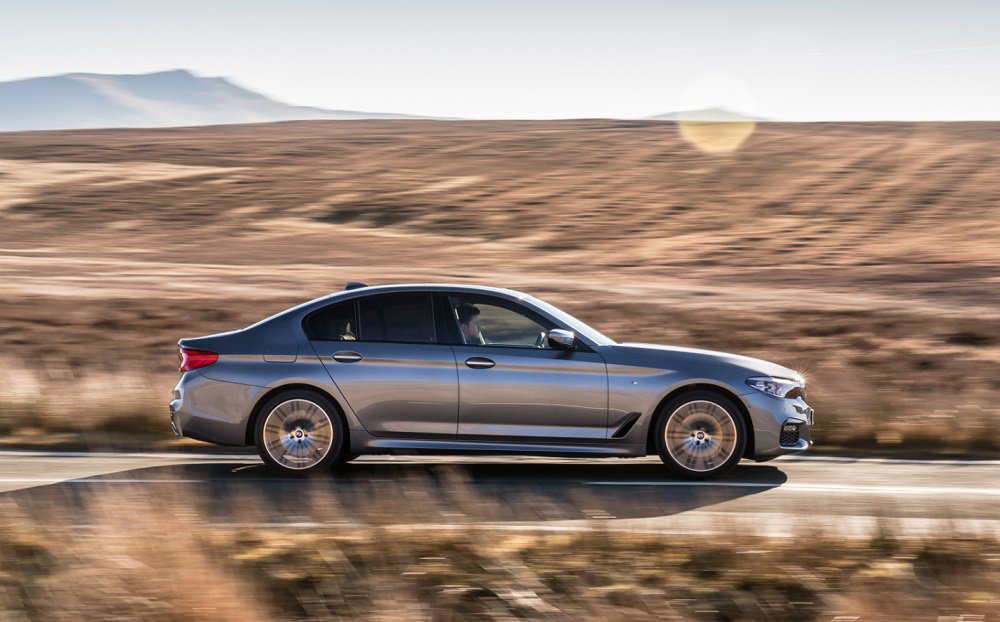 Unless you’re really into your BMWs, it could take a moment or three to notice the key aesthetic enhancements to the new-generation 5 Series, but, once your eye is attuned to the G30's styling tweaks, it's hard to deny that the refreshed Five is a rather handsome saloon.

This generation of 5 Series in 36mm longer and six millimetres wider, allowing an increase of seven millimetres to the wheelbase.

These minor changes in the dimensions are accompanied by new styling to the standard LED headlights, air slats behind the front wheel arch like its larger 7 Series sibling and a conservative profile with emphasis on drag coefficient that sets a new benchmark in this class.

In essence, the 5 Series has never looked more like a mini-me 7 Series, which is no bad thing, really. 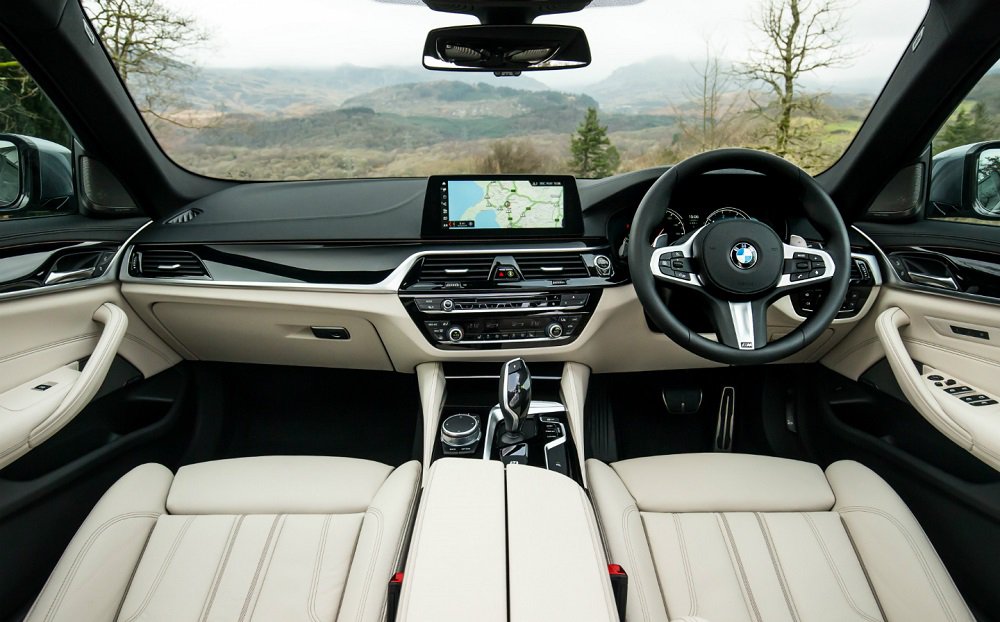 As you might expect, fit and finish inside the 5 Series is exemplary.

BMW have used quality materials throughout the interior, with the option to customise aspects of the cabin from a large range of metal or wood trims as well as different leather types, finishes and colours all making the 5 Series feel like it’s yours.

The control layout and design are perhaps not much of a departure from regular BMW fare, but then that’s what buyers pay for when they buy this car and it’s what they expect.

The 5 Series is a car as much to be driven in as it is to drive, so there’s loads of legroom in the back, given that the car’s wheelbase has been significantly stretched over the previous model, making it roomier inside than some previous 7 Series models. 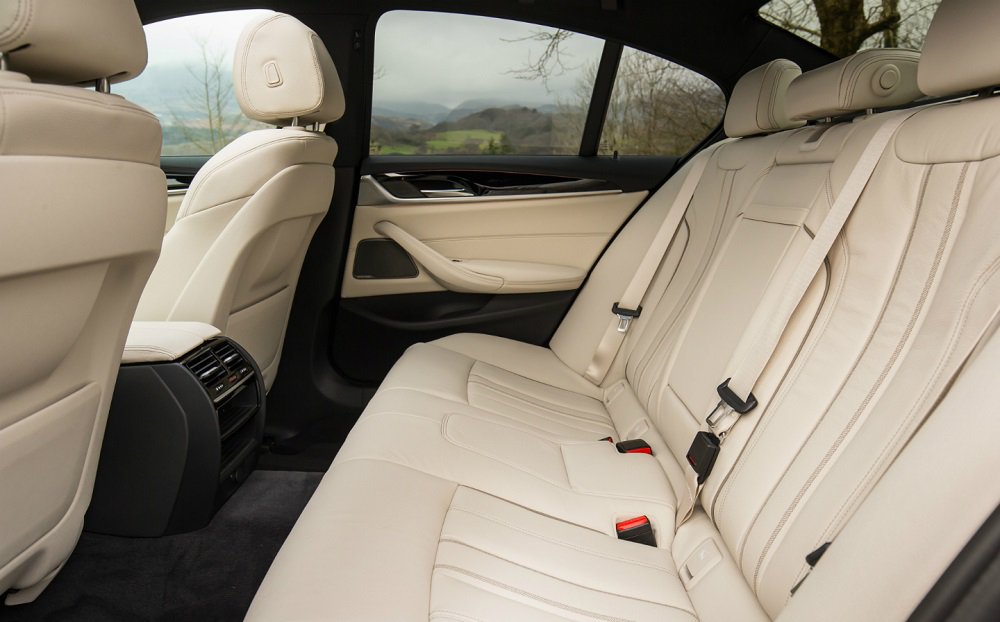 Headroom is reasonable throughout, though in the rear the high transmission tunnel and sloping roofline makes great space for two but not a third as the middle pew is quite tight. But perhaps this is a car you’re more likely to use as a transitory office rather than cart the whole family and a boot full of luggage. That’s a job best left for the Touring estate.

The boot is now 10 litres bigger than the previous 5 Series, bringing total capacity up to 530 litres. That’s a tad less than the E-Class, but it’s still roomy enough for large suitcases, golf clubs or shopping bags, while the optional (and recommended) electric boot lid takes much of the hassle out when you’ve got your arms full of luggage. 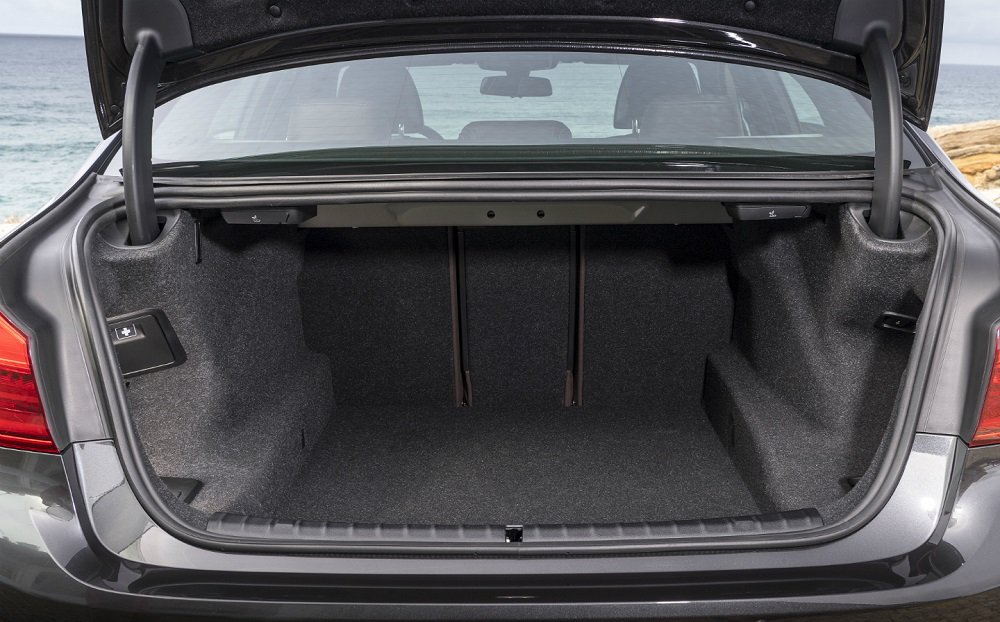 Standard equipment on the range-entry 520d SE is expansive to say the least, yet the M-Sport upgrades the SE’s 17-inch alloys for a handsome set of 18-inch ‘M’ twin-spoke wheels that look great and are shod with run-flat tyres.

Throughout the cabin, the M’ moniker is displayed on key parts of the interior including floor mats, pedals and a steering wheel specific to M models. The M Sport also features an M aerodynamic body styling package too, with LED fog lights and specifically engineered M Sport suspension adding to its appeal. 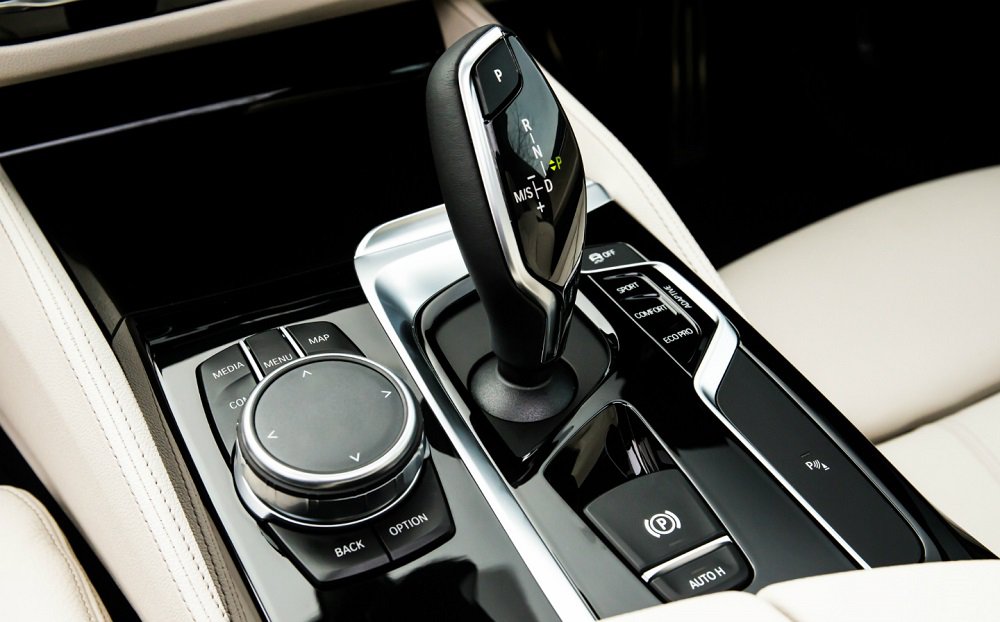 While the four-cylinder 2.0-litre turbocharged 520d is a range-entry engine, it feels anything but basic. There’s 187hp on offer, along with 400Nm of torque providing plenty of punch for easy overtaking and motorway driving yet is quiet enough that you rarely ever notice it going about its business. If you want a 5 Series and you’re perhaps concerned about choosing an oil-burner, don’t be. Diesels have never been as clean as they are today, and most are friendlier to our planet than petrol engines in terms of CO2 and NOx emissions.

All versions of the 5 Series come with an eight-speed automatic transmission as standard and it’s excellent. As the gearbox moves through the gears it’s so smooth you barely notice it changing. Kick downs are smooth and predicable too, but if you want to take control - which is easy to do - it behaves just as you’d want it to in manual mode.

If the recent dusting of snow means you’re worried about rear-wheel drive in your neck of the woods, then the 520d is available with xDrive as an option. This all-wheel drive system remains rear-biased, so you still get very good handing for most of the year, but with added peace of mind when conditions take a turn for the worse. 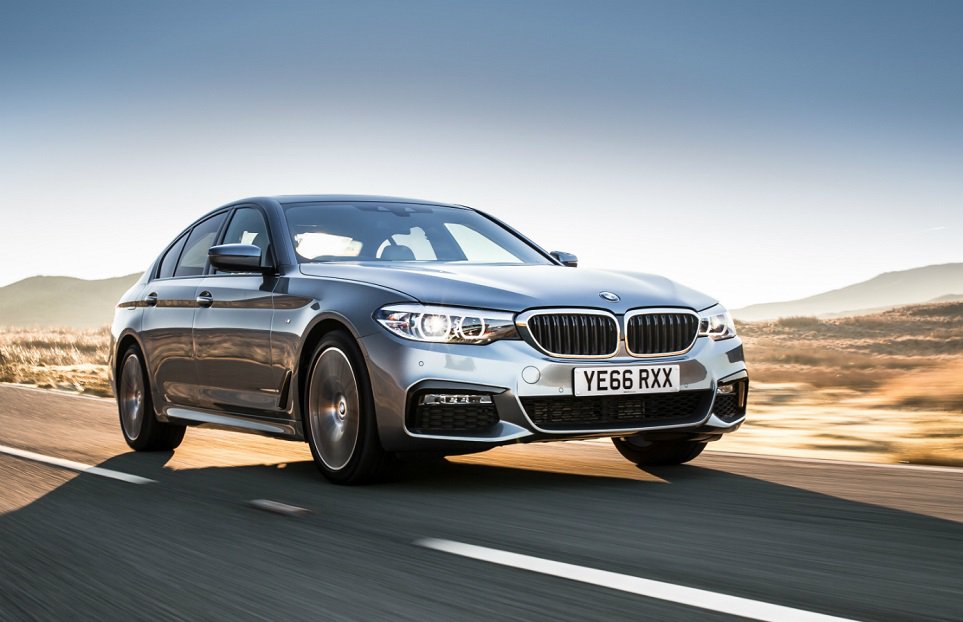 Surprisingly for a large car, the 5 Series is so easy to drive and inspires confidence. There’s a good view out of the large windows and the only mildly annoying blind spot is the chunky base of the A-pillar.

In the urban environment where roads aren’t the smoothest, the 5 Series is impressively comfortable, soaking up potholes and rough surfaces with ease.

Like its rivals, the BMW 5 Series feels at home on the motorway, where its refinement and comfort really shine. It makes long trips feel short and cossets its occupants. Tyre noise is largely muted at motorway speeds and only a hint of wind noise makes its way into the 5 Series’ otherwise very relaxing cabin. It doesn’t quite waft along like a Mercedes E-Class fitted with air suspension, but it’ll chomp its way through hundreds of motorway miles with the utmost ease. 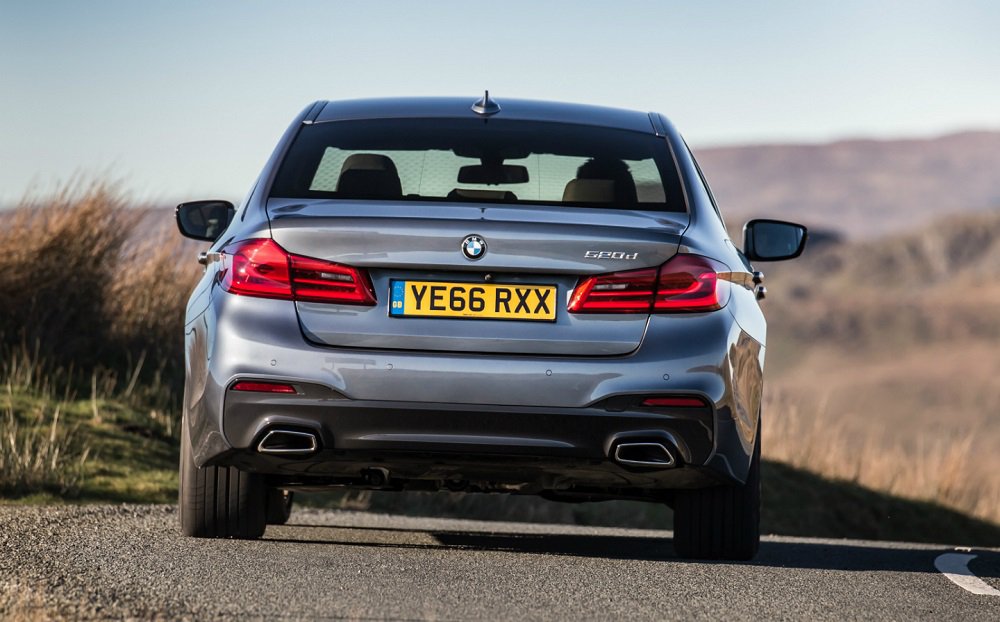 The 5 Series does feel considerably sportier compared to the Mercedes E Class, which can’t quite match its fun factor on a quick backroad blast. The steering, suspension and chassis work together very impressively to negate the car’s bulk and the result is handling that puts plenty of smaller, lighter cars to shame. 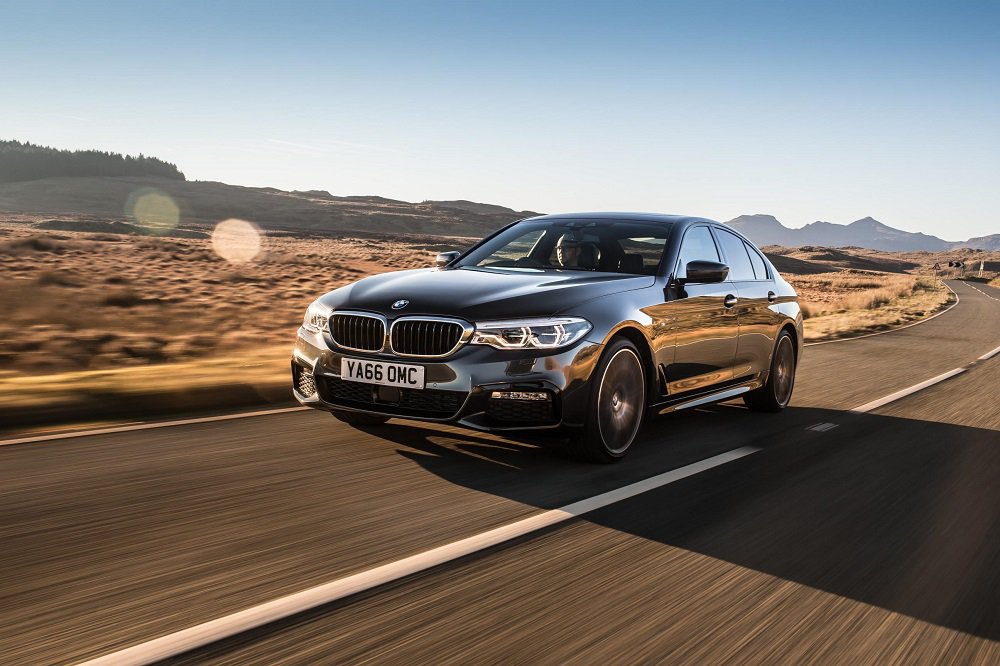 Fuel economy: During my week with the 520d M Sport, I covered 528 mixed miles and achieved 43.8mpg (which I was rather pleased with), at an average speed of 35.2mph. Official mpg on the combined cycle is given as 65.7 which I very much doubt is achievable outside of a clinical laboratory.

CO2g/km & NOx emissions: Surprisingly from a car of this size and weight, CO2 emissions are a very respectable 114g/km and NOx equates to just 0.0142g/km – and that’s cleaner than most petrol-burning rivals. 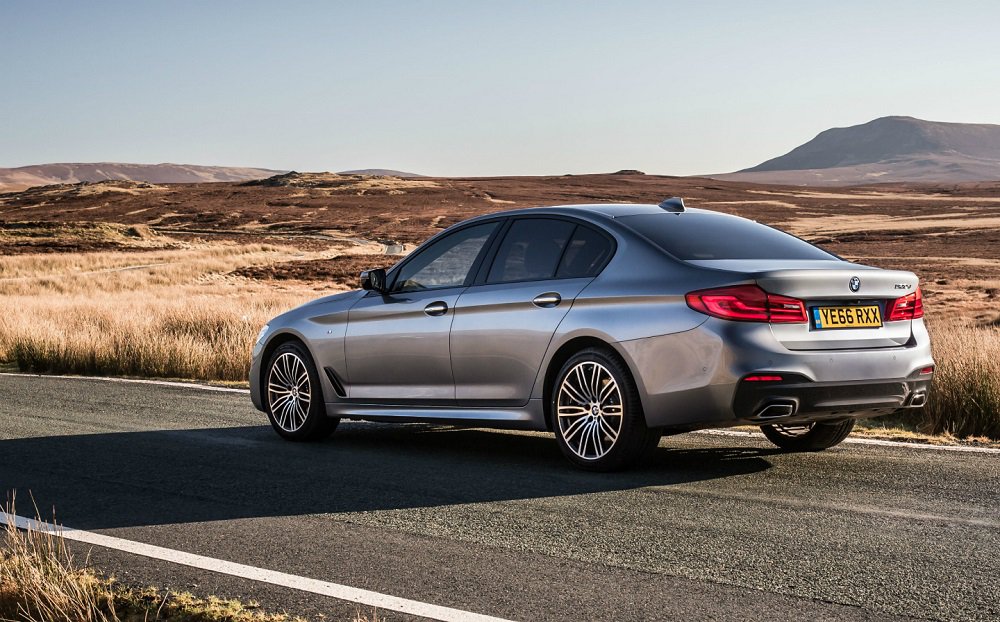 BMW says the current 5 Series is the most technologically advanced car the company has ever made and it’s difficult to disagree with such a bold statement – however hard I tried. Everything on board contributes to an impressively polished package which blends stunning driving dynamics, efficient performance with cutting-edge connectivity and technology.

Even in fairly basic SE spec, many of the headline features are included as standard – which makes the 5 Series incredibly good value compared to its competitors. Add the dynamism of the M Sport package which lowers and stiffens the car to provide an impressive level of roll control, and you have what many are saying is the finest BMW ever produced.

I would go one further and suggest that the 5 Series is the most accomplished saloon car in the current UK car leasing market.