I’ll concede it’s an age thing, but it is hard to believe that the Audi TT Roadster has been with us for nigh on twenty years.

Since 1999, the Audi TT Roadster has provided the more fashionable driver with open-topped motoring pleasure. A blend of striking good looks, a high-quality interior and reasonable running costs has enabled the TT to reach its third-generation. Unlike its hardtop equivalent which has four (sort of), the Roadster (definitely) has only two seats, but otherwise it proffers the same virtues. 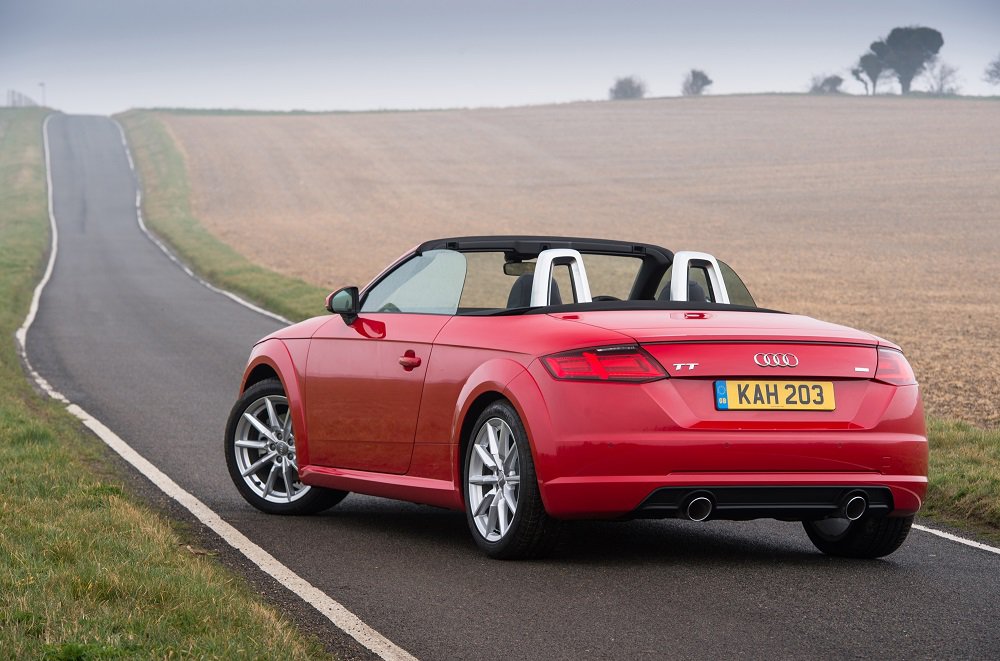 Originally designed by Peter Schreyer (who was headhunted by KIA to kick of their model regeneration programme in 2006), the Audi TT Roadster was scheduled to be the initial late nineties TT launch model – until Audi decided to lead with a hard-top coupé version.

Many dismissed the TT’s earlier iterations as being little more than a car for hairdressers, estate agents and labradoodle shampooists and, to some degree, they may have been right. However, this third-generation rag-top TT Roadster has upped its game significantly. It’s more refined, better to drive than ever and packed with far more advanced technology than any of its predecessors.

The TT Roadster Mk3 is 21mm shorter than its predecessor. However, its wheelbase has been extended by 37mm, meaning shorter front and rear overhangs which contribute to a more bullish stance. Now at 1,832mm wide, the latest TT Roadster is 10mm narrower and 3mm lower than previous.

The party-piece of the TT Roadster is, of course, the folding fabric roof. (Audi has always offered a fabric roof on its convertibles, rather than folding metal hardtops. It’s weight thing.) There are twin electric motors powering the soft-top which can now complete the full opening and closing cycle in 10 seconds – and at speeds of up to 30mph. When opening the roof fabric forms a ‘Z’ shape as it folds flat into its all-aluminium tray. Unlike most convertibles, none of its luggage capacity is lost in doing so.

In the flesh, the svelte bodywork, huge hexagonal front grille and big wheels are instantly attention-grabbing while the LED headlights and tail lights have a unique criss-cross lighting signature.

Compared to the TT Coupé, a flat boot deck, the removal of the small rear seats and new rollover hoops give the Roadster its own look. But still, roof up or roof down it’s a stunning piece of design. 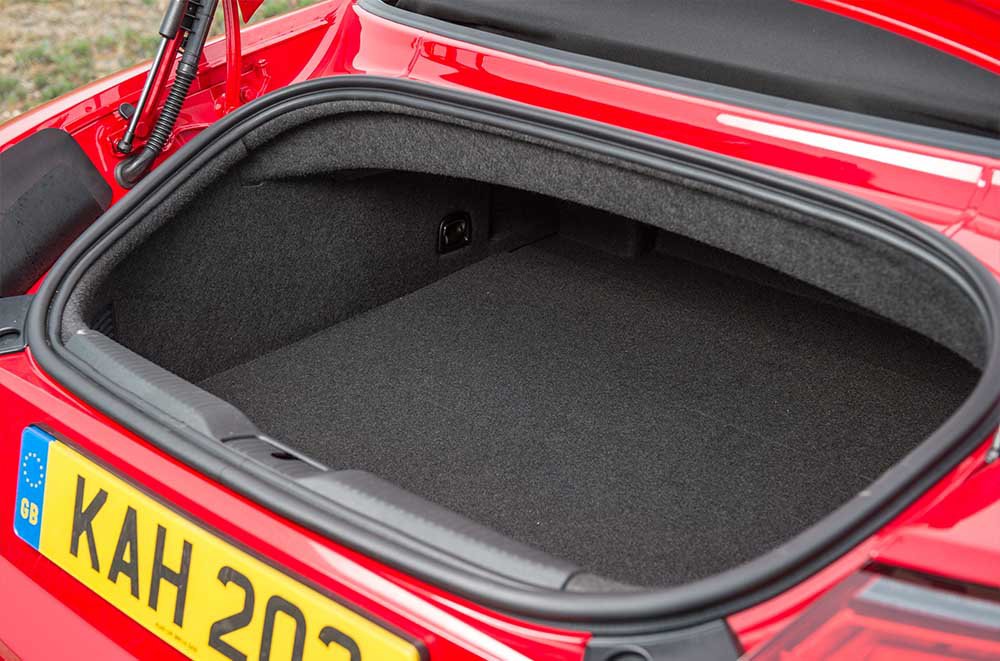 Things get even better on the inside of the TT Roadster where Audi has used technology to create an uncluttered and driver-centric space.

Since the Mk1 TT, the car’s interior has left rivals playing catch-up – and so it is with this third generation. Completely uncluttered and boasting the firm’s ‘virtual cockpit display’, which dispenses with the traditional centre console for infotainment, navigation and other information and puts it directly in-front of the driver in the main instrument binnacle.

The ability to switch between information streams and even fill the screen with navigation instructions is intuitive and genuinely beneficial to drivers, while the multifunction display offers a different layout for the TTS. 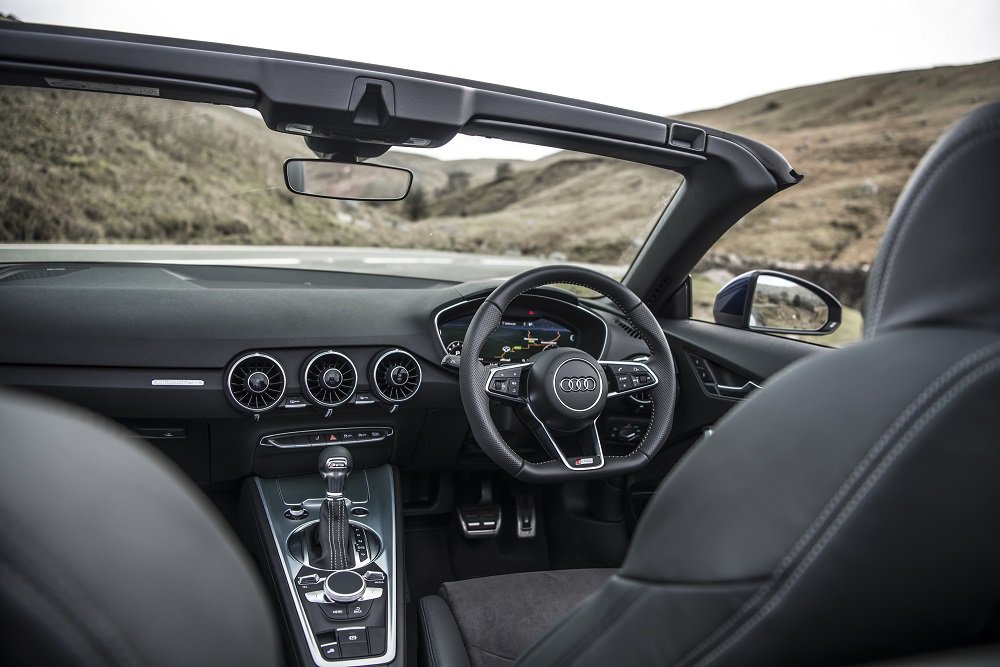 While there isn’t much to entertain the passenger, they can at least be fascinated by the exquisitely designed air vents, complete with integrated controls for the climate control system (and heated seats where fitted).

Be in little doubt that this is one of the best car interiors currently in production, at any price point. 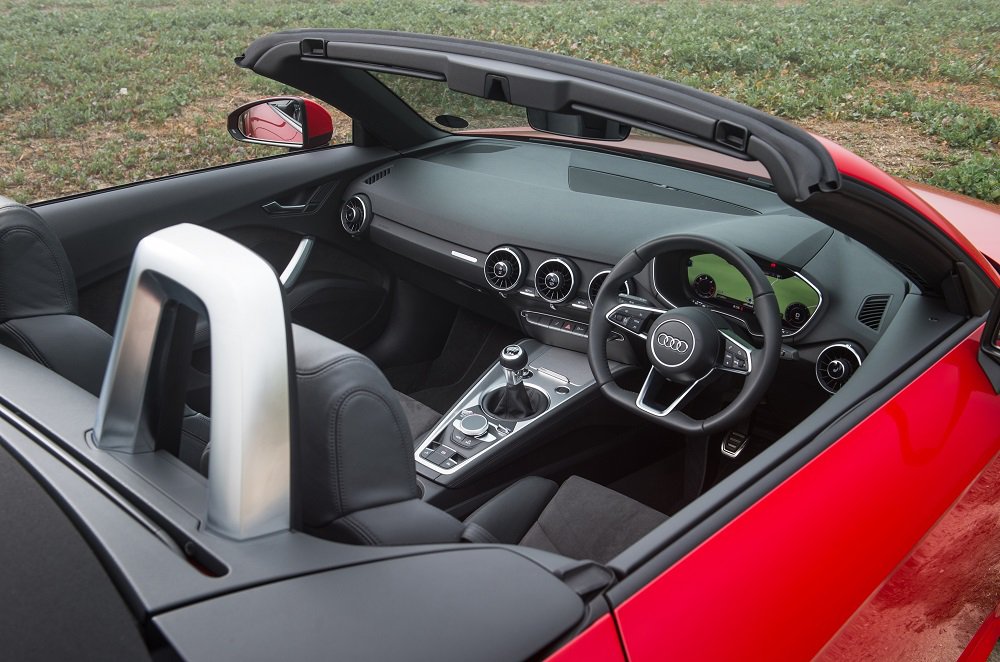 There are three trim grades available on the current Audi TT Roadster; Sport, S Line and TTS Quattro. In addition, there are two further Black Editions offering interior and exterior styling upgrades for those who prefer a sportier look.

The TTS Roadster is the ‘high-performance’ variant for those who want to add speed and a sonorous audio note to the open-top experience. It adds a lot of the same equipment as the other models but has a mid-range stereo and more aggressive ‘Super Sport’ seats. 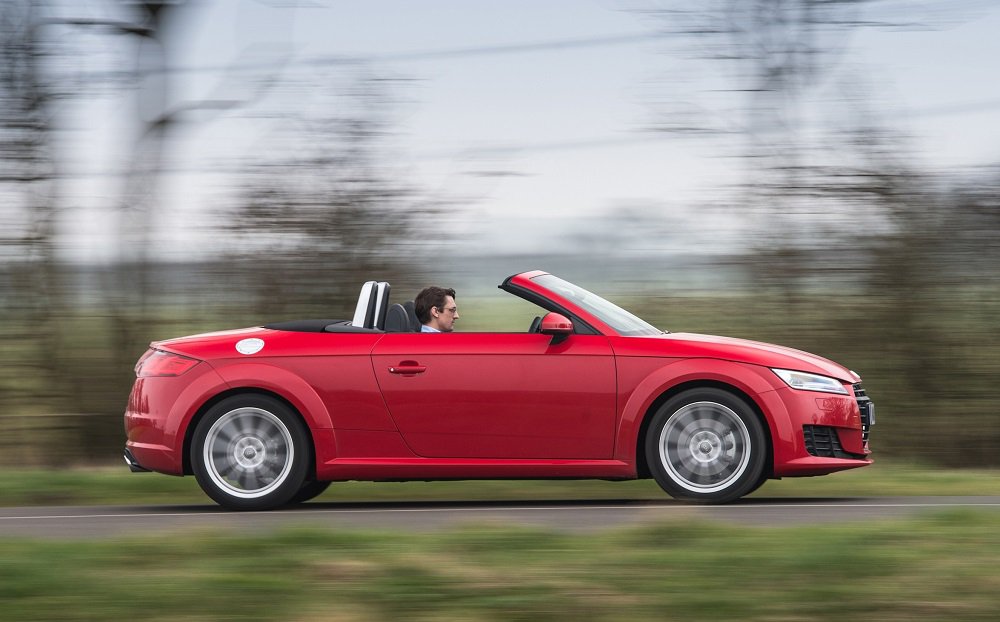 It’s little surprise that the all-four-cylinder engine range available on the TT Roadster is identical to that found on the coupé.

There’s also the more powerful 306hp / 380Nm petrol in the top of the range TTS quattro. All impress both on paper and in reality.

It’s pretty safe to say that the petrol engines suit that TT Roadster better thanks to a great exhaust note and a strong, linear power delivery. The diesel is a strong performer, but with the roof down it lacks the aural drama of the petrol models. 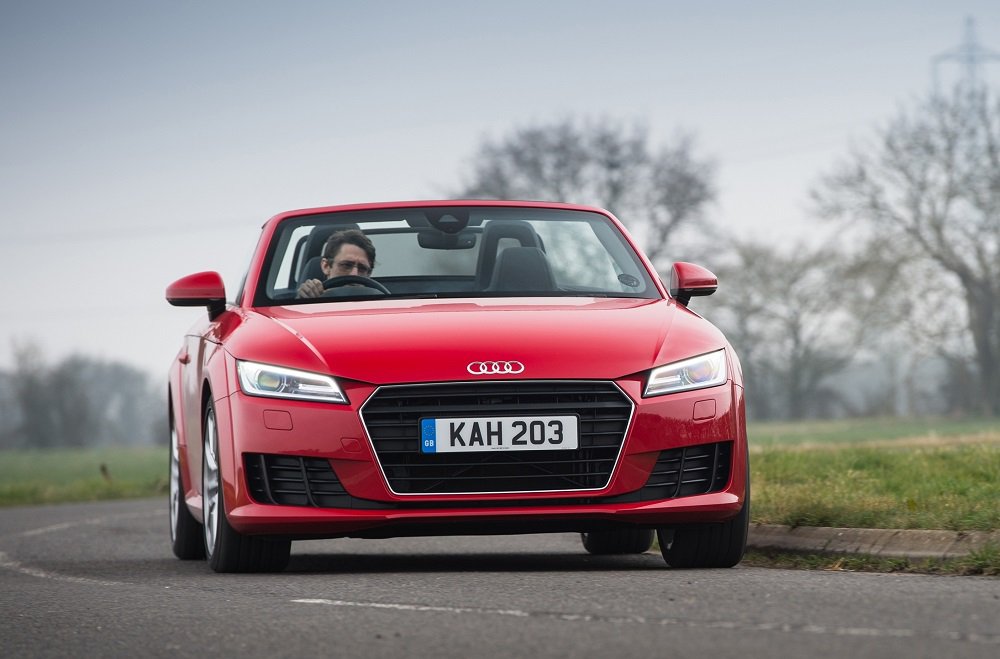 The diesel is available with a six-speed manual or six-speed automatic which can send drive to the front or quattro layout. It is the most economical option at 65.7mpg and emissions are 114g/km, so tax is less expensive that petrol-engined TT’s. Performance is still impressive though, especially when on the move thanks to a hefty 380Nm of torque, but you do feel the diesel’s extra weight over the front axle.

The 306hp top-of-the range TTS gets the same 2.0-litre TFSI engine paired to either the manual ‘box or six-cog S Tronic transmission and full-time quattro system. 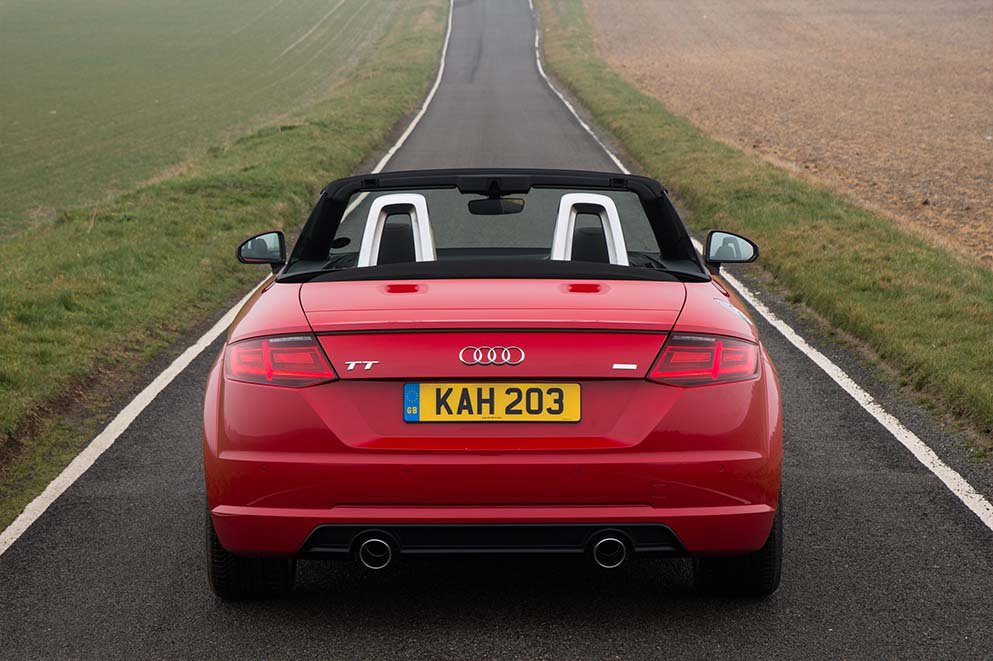 The Audi TT Roadster running costs will be music to your ears, especially if you choose the diesel with its promised 65.7mpg economy and 114g/km of CO2 emissions. You’re unlikely to achieve over 60mpg in the real world, but around 55mpg should be eminently possible.

However, if you don’t think a roadster should have a diesel engine – and many certainly won’t – then the petrol engines won’t be too harmful on your wallet either. With front wheel-drive and a manual gearbox, emissions are pegged at just 140g/km. On the official combined cycle, this car will return 47.1mpg, though it would be reasonable to expect a number closer to 40 than 50mpg from day to day. 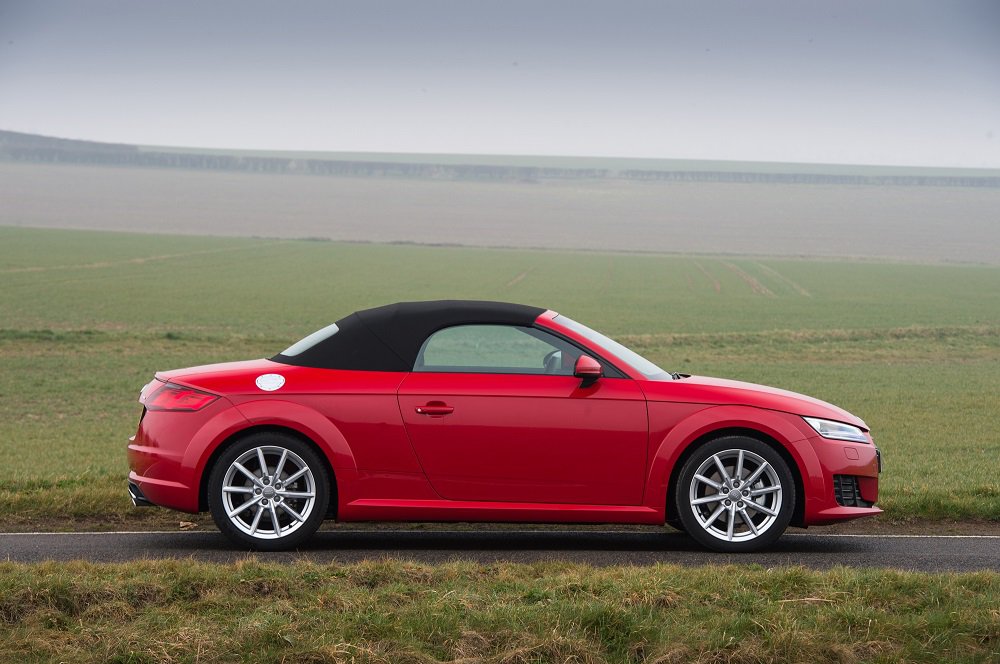 Being 90kg heavier and (despite the extra bracing) less rigid than the Audi TT Coupé, the TT Roadster isn’t the sharpest sports car on the market. However, the differences between the two variants are marginal at best, so you’ll still have access to one of the better roadsters in this market place to drive.

Find a twisting B-road and the TT Roadster can be great fun. Performances are good whichever engine you choose and there is plenty of grip from the rubber. Our crusty British road surfaces tend to agitate the Roadster which can sometimes become a little skittish or even uncomfortable over particularly large potholes and bumps.

The TT Roadster gets a Drive Mode selector, which allows the driver to set up the steering weight, throttle response and, in the S Tronic, the cog-shifting pattern to suit different situations.

There are five driving modes - comfort for town driving, dynamic for a twisting route, an efficiency mode for saving fuel on a long journey, an automatic mode that adapts to the situation plus a customisable ‘Individual’ mode which allows the driver to tune various options to suit personal preferences.

The Roadster’s overly firm suspension may dent your confidence when pressing on and it would be pushing the envelope a tad too far to suggest the TT Roadster is a genuine sports car, as it tends to lack the composure, agility and nimbleness of some of its rivals such as the Porsche Boxster or Lotus Elise.

Nonetheless, it is very good fun to drive on the right road and easy to live with in town thanks to the selectable driving modes and steering that can change its weighting. For an everyday car that is fun when you want it to be, be assured there is plenty to like about the TT Roadster. 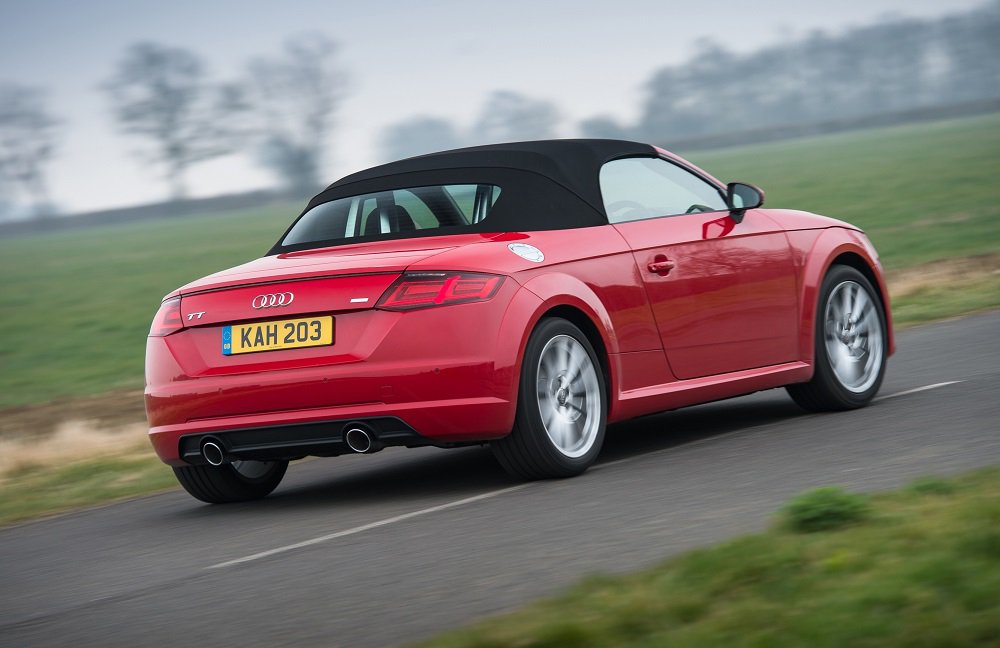 The Audi TT roadster has always been one of the most stylish convertibles in its class and this third iteration is no exception. It’s better to drive than ever, offers great performance and is as high quality a product as you’d expect from Audi.

Purists might find the TT Roadster a little too easy and unchallenging to drive but, short of forking out lots of extra dosh for a Porsche 718 Boxster, it’s hard to think of where else you’d go to beat it.