Call me old fashioned (it’s okay, I’ll wait…thank you), but while the ongoing deluge of SUVs and crossovers have their place, I am still rather fond of the traditional three-box sedan when it comes to cars. And the subject of this week’s review is a cracker.

The current fifth generation Audi A4 debuted at the Frankfurt Motor Show in 2015, with the first models reaching our shores in 2016. However, the A4 has been around since 1995, when it took over the ‘posh saloon’ mantle from the Audi 80.

The Audi A4 resides in the very competitive compact executive area of the market, rivalling the likes of the Jaguar’s XE, BMW’s 3 Series, Mercedes-Benz C-Class and perhaps the impressive Volkswagen Arteon. 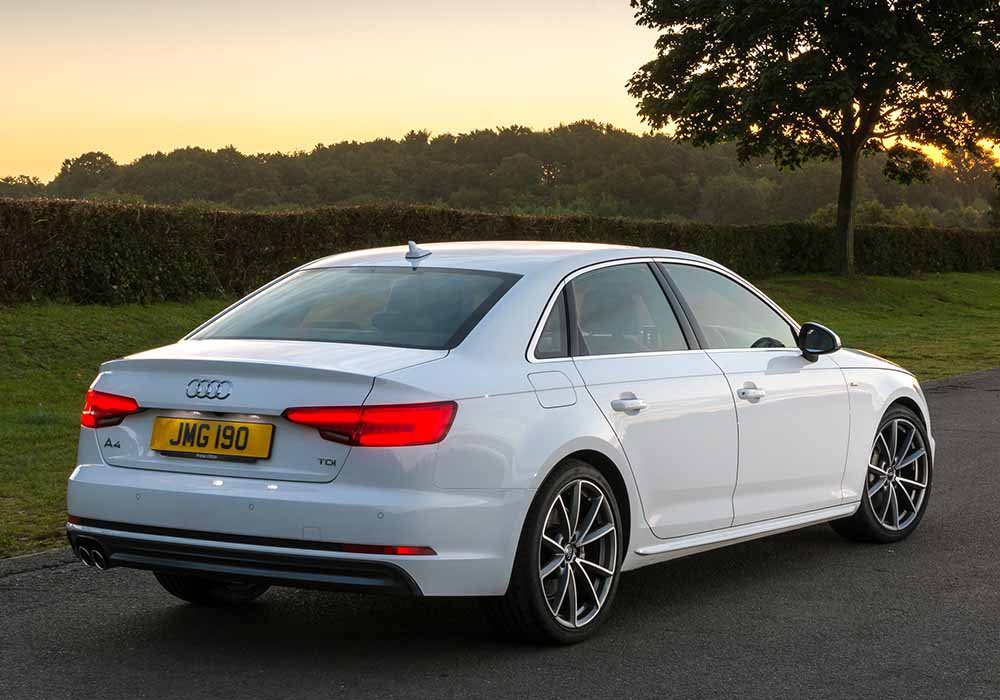 The A4 is, of course, also available as the load-lugging Avante estate, but it’s the conventional three-box saloon that has become Audi’s bread and butter over the years and given gravitas to Audi buyers in the face of the two other strong players from the Germanic ‘hood, BMW and Mercedes-Benz

Using its new MLB Evo platform, the A4 has switched to hybrid aluminium and steel construction, making the kerb weight of certain versions 120kg lighter than their predecessors. In addition, the latest Audi A4 has the lowest roofline of any compact executive, contributing to a drag coefficient as low as 0.23. 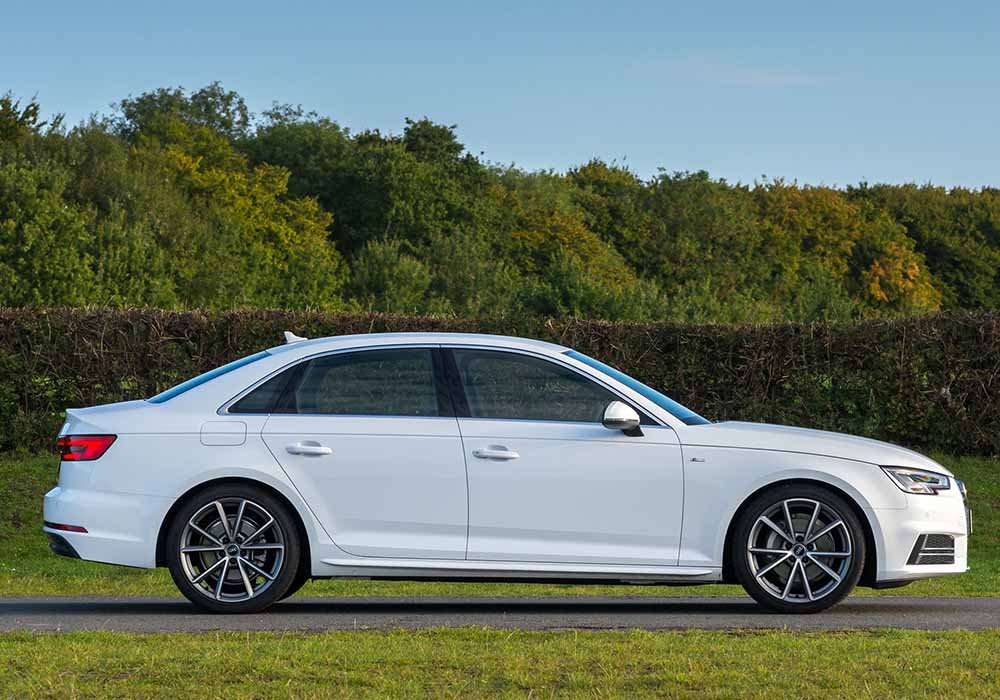 As is the way with Audi’s Russian-doll approach to styling, the smallest Audi saloon is fairly similar in appearance to its larger saloon siblings – the A6 and the A8 land yacht – boasting a large hexagonal front grille, sleek lines and a sporty stance. As ever, the signature Audi logo takes pride of place on the front of the car.

The options list is expansive and you will need deep pockets should you wish to personalise your Audi A4 saloon. Choices include 14 colours of paint, various alloy wheel designs and diameters, a choice of suspensions (standard and adaptively damped), differing headlight technologies, seat upholsteries and interior trims, plus a good selection of technology and safety packs. 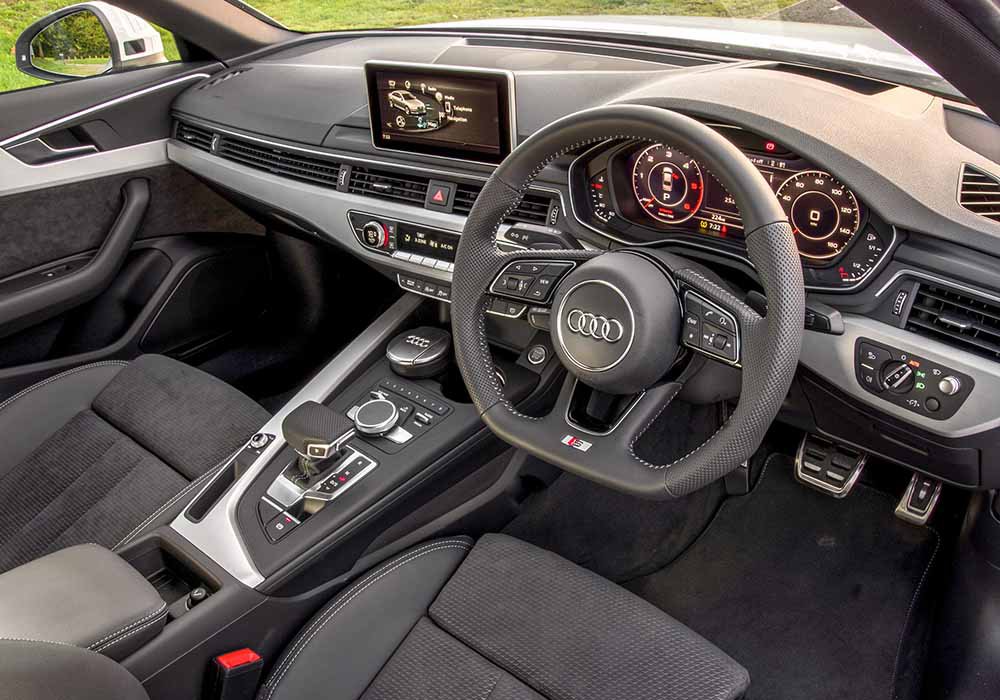 The A4’s cabin is very impressive – even by Audi’s own high standards. Material quality is excellent and the fit and finish are impeccable. All the switches and dials feel slick and precise, while the instruments and infotainment screen look clear and respond immediately, with no input delay. The A4 really does feel like a top-quality car.

Audi has removed as much clutter from the dashboard as possible in recent years, with the A4 becoming the fourth model in the brand's line-up to feature a minimalist interior layout. It also has an incredibly well-built interior that just oozes class and sophistication. In true Audi fashion, it's still a more sober design layout you get in the rather boisterous Mercedes C-Class, but Audi's penchant for creating classy interiors has been maintained in the A4.

The 'Virtual Cockpit' instrument cluster originally introduced on the TT Coupe has been carried over to the A4. This means most of the buttons have been moved down into the centre console. The only buttons that remain on the dashboard operate the climate control and the driver aids. The automatic versions have an aircraft-throttle-like gear lever which looks smart and doubles as a wrist-rest. The central vent that's fixed into the dashboard is called an 'air shower'. It's meant to diffuse air gently towards occupants, rather than blow it in your face like traditional air vents.

Space for rear-seat passengers is generous, with more leg and head room than in the previous A4 - adult occupants will be more than happy, even on longer trips. The boot has a generous load volume of 465 litres, but the A4 is a saloon and is consequently less practical than a hatchback by design. Folding the rear seats expands volume to 965 litres. There are three primary trim grades in the current Audi A4 model range: SE, Sport and S line, plus a special Black Edition atop the pile.

All models have three-zone air conditioning, with separate controls for the rear row, plus there is a rotary controller for the seven-inch ‘nav-ready’ colour infotainment system, along with Bluetooth phone and audio connectivity and DAB. All A4 cars also come with cruise control, rear parking sensors, keyless go and emergency brake assistance. 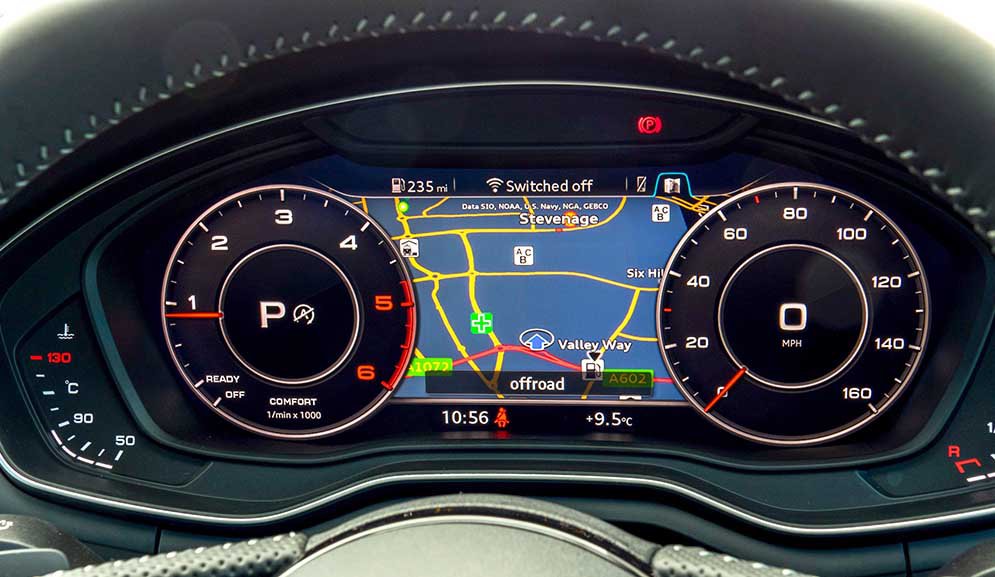 Higher trim levels get more equipment including navigation, an upgraded audio system and sports seats, but the real toys are - in typical Audi style - optional. These range from alternative alloy wheel designs, upholstery finishes and trim details through to advanced technologies like adaptive LED lights, a head-up display, Audi's full-LCD instrument display as introduced on the TT Coupe, plus a more advanced cruise control system that will advance automatically in slow-moving traffic jams, following the car ahead.

Android Auto and Apple CarPlay connectivity is standard and works very well in the A4, replicating most of the functions from a smartphone screen in the car, including Siri voice control or Google Maps, complete with navigation. For staying connected, or even just for listening to music streaming services like Spotify, both the Apple and Android systems are excellent. 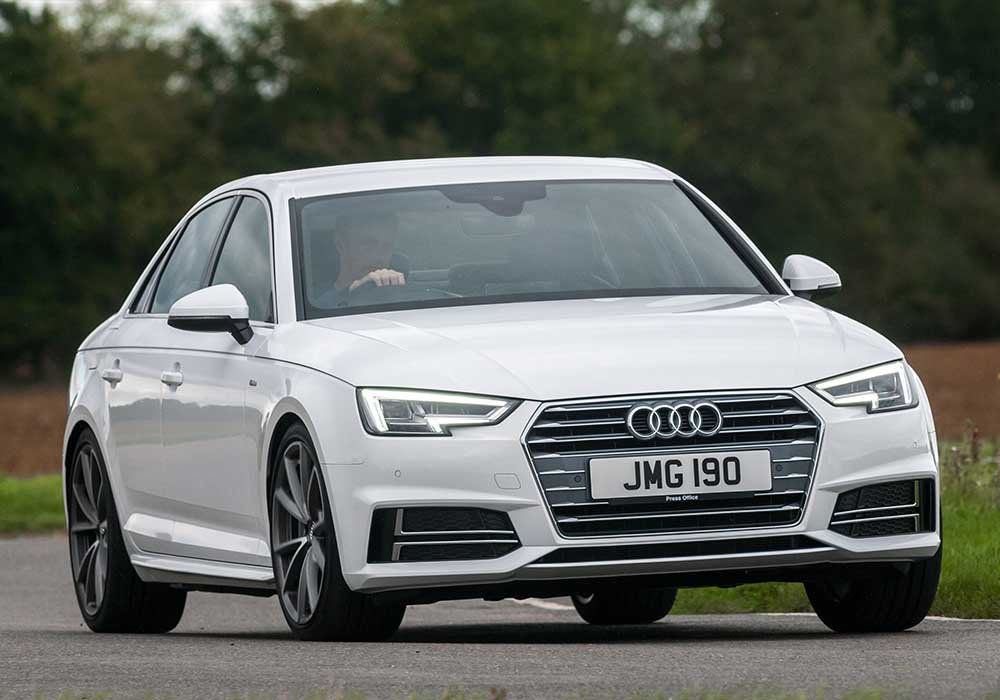 The Audi A4 is available with a broad selection of engines with power outputs ranging from 150PS to 272PS. The engine range is predominantly diesel, but there are three petrol options – a 1.4-litre with 150PS and a 2.0-litre with either 152PS or 190PS.

The diesel selection is wider, with outputs ranging from 150PS for the efficient 2.0-litre Ultra to 272PS for the range-topping 3.0 TDI quattro.

For company car drivers, the most appealing option is likely to be the 2.0-litre TDI Ultra since it has low emissions of just 99g/km and official economy of 74.3mpg on a combined cycle, meaning low running costs and 17 per cent benefit-in-kind (BIK). Despite being an entry-level engine it’s quiet and very capable, reaching 0-62mph in a respectable 9.2 seconds. It has plenty of torque for motorway driving and the slick manual transmission is effortless.

But the A4 is at its best with an automatic transmission. The 190PS 2.0-litre TDI Ultra is available with a seven-speed S Tronic (as tested) and I think it’s the sweet spot in the A4 range, offering capable performance allied to impressive fuel economy. Acceleration from 0-62mph takes 7.7 seconds, while emissions are just 103g/km and official economy is 70.6mpg.

Those who really want some power can opt for the 3.0-litre V6 diesel, which has quattro all-wheel and comes with 218PS or a hefty 272PS. The latter has a colossal 600Nm of torque, making for a very swift 5.3 second 0-62mph sprint time. Yet, despite the seriously impressive performance, claimed emissions are as low as 129g/km if you opt for the smallest wheel size. However, regardless of what’s under the bonnet, the new A4 is a wonderfully quiet and refined car. There is barely any wind or engine noise audible in the cabin – even at motorway speeds – thanks to impressive aerodynamics and excellent sound-proofing. Audi says the A4 is as quiet on the go as an A8 and it’s believable, but the quietness is somewhat interrupted in cars fitted with larger alloy wheels which tend to rumble on coarse British tarmac.

The larger wheels also tend to spoil the ride quality. Over rough, potholed surfaces the A4 feels too firm with optional 19-inch wheels, meaning road imperfections pound their way into the cabin. This issue is mostly eliminated when smaller wheels are specified though – in fact the A4 rides smoothly with the entry-level 17-inch alloys. If you choose the S line trim level, by default you get firmer Sport suspension as standard. This can be optionally removed at no cost. Through corners the A4 is very well composed, with little body roll and impressive grip levels, especially when quattro all-wheel drive is equipped. That said, the A4 really isn’t a car for heroic B-road antics – it’s far more at home on a long motorway cruise, where the excellent refinement and comfort levels really make their mark.

All cars come with a drive mode selector that allows the driver to choose from various profiles, with steering, throttle response and even air conditioning retuned to deliver a more economical or sharper, sportier drive depending on what you want. It makes a slight but noticeable difference in practice, but most drivers will be happiest with the Comfort default setting. Overall, for those who aspire to refinement and quality, the Audi A4 is hard to beat. It might not be quite as sharp to drive as the BMW 3 Series on a country road, but on motorways it’s quieter and more relaxed, plus it is available with a huge range of technology – should you want it.

You’ll hear less wind and tyre noise than in the BMW, Mercedes or Jaguar and its light controls and standard parking sensors make it a doddle to drive in town. The efficient engines and low running costs are the icing on the cake, making the A4 arguably the best small executive car on sale.