As a trembling finger prods the ‘stop’ button, a deafening silence floods the cabin. My ears are ringing, my wrists are numb and my forearms ache. Unused adrenalin turns my body into a sack of Maris Pipers. On the ragged edge of legal velocities deep in the Yorkshire Dales National Park, I’ve just spent the final few hours of a great week with the best Alfa Romeo ever made.

As much a mouthful as it is a handful, the Alfa Romeo Giulia Quadrifoglio Verde–to give it its full name–is an utterly brilliant car.

However, that it saw the light of day at all is a minor miracle. 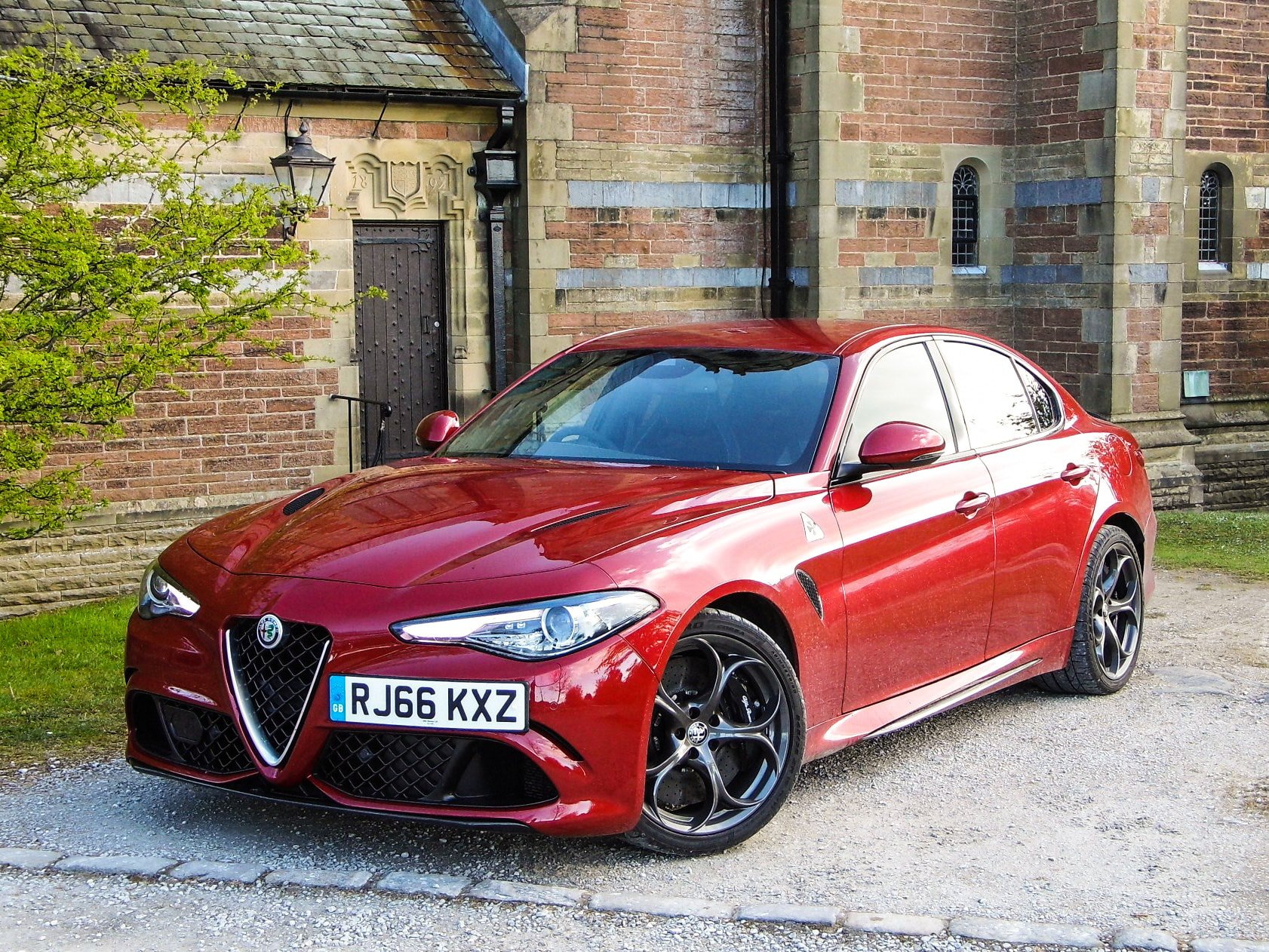 With the debatable exclusion of the 4C, there has been much to disappoint from Alfa Romeo in recent years, fuelling the near-demise of the Italian brand. It has offered a series of dull Fiat-sourced front-wheel drive hatchbacks that have failed to tempt the Alfisti. As for attracting new buyers to the brand, the current Mito and Giulietta are as appealing as a caravan of stoats in your underwear.

Consequently, there is a lot resting on the Giulia’s shoulders.

It’s the first model in Alfa Romeo’s ambitious renaissance, which purportedly involves a cash dump from parent Fiat to the tune of €5 billion and an army of over 800 designers and engineers whose sole brief is to develop an all-new Alfa Romeo model range in the coming years. Whether or not those plans reach full–or even part–fruition, there is no doubt that Alfa Romeo is in dire need of long overdue regeneration.

The Giulia was subject to extended gestation and several delayed launch dates, reportedly due to several designs being unceremoniously returned to the drawing board by Fiat Chrysler Automobiles (FCA) CEO, Sergio Marchionne. 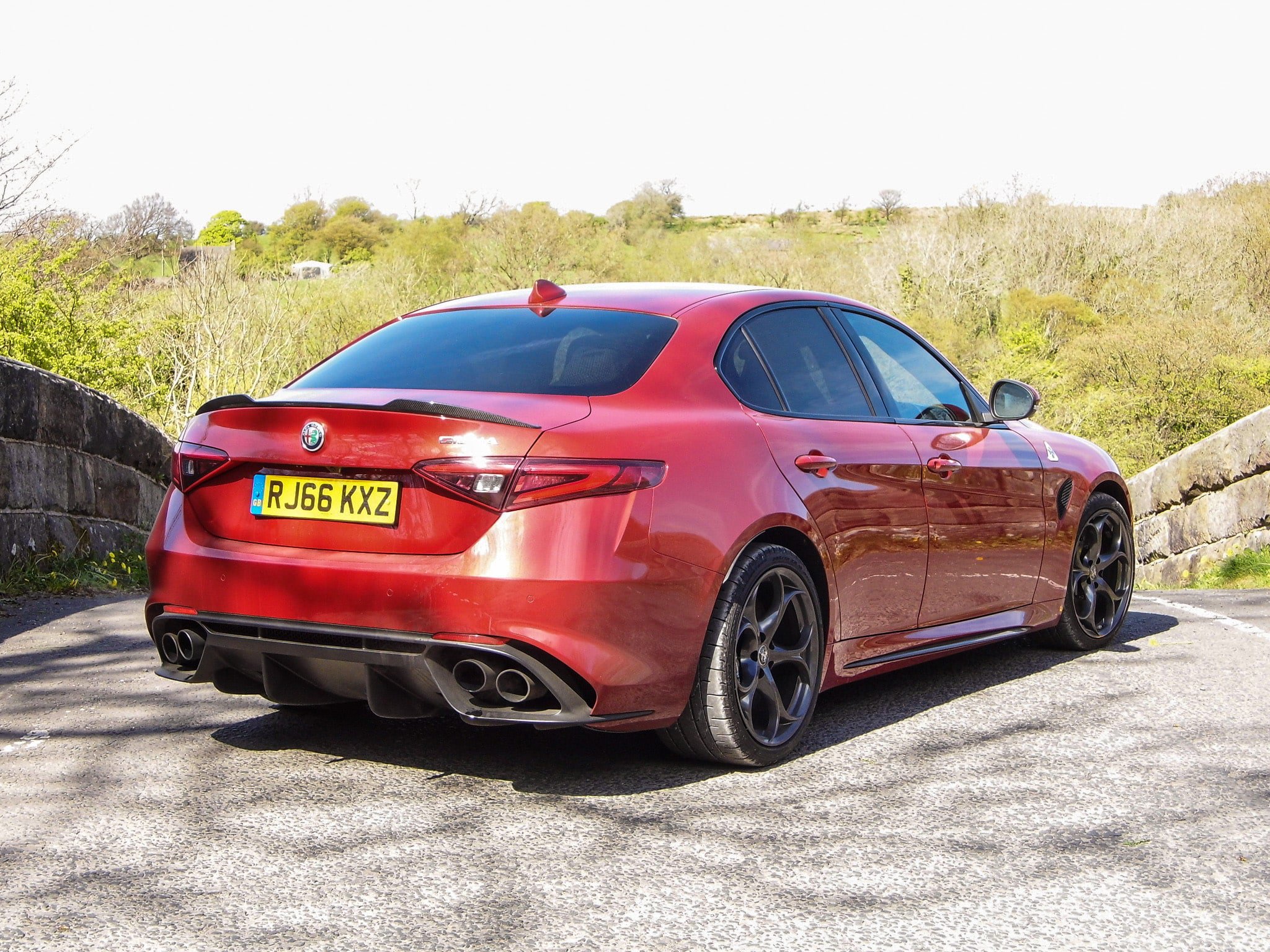 Development of the Giulia was overseen by Ferrari 458 creator Philippe Krief. It was designed at the Centro Stile Alfa Romeo and is built at FCA’s Cassino plant north of Naples. It rides on an all-new, longitudinal-engined, rear-wheel drive platform developed by Ferrari for Alfa Romeo. Production of the Giulia started in April, 2016. 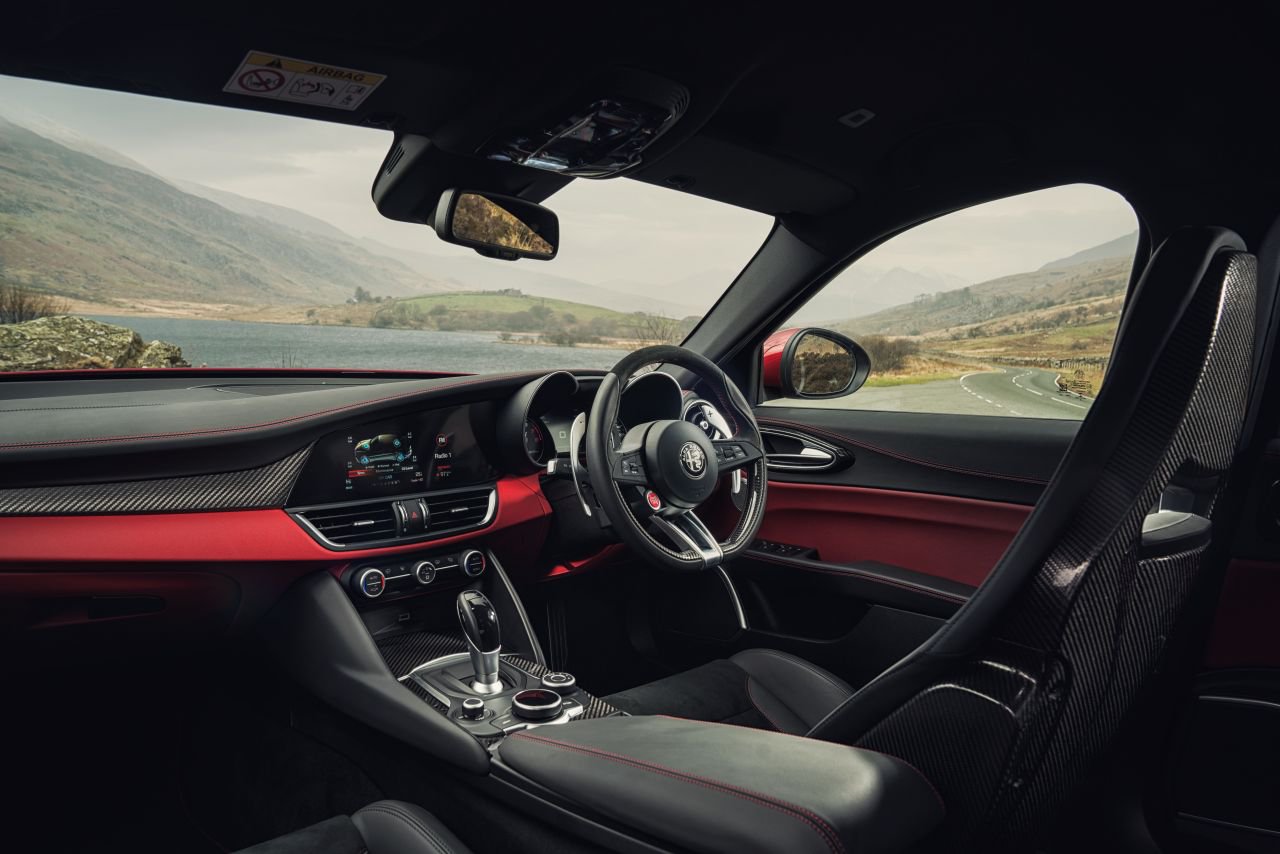 The hardcore Giulia QV was designed and engineered to deliver uninhibited driving enjoyment. Should it happen to transform BMW’s M3 to gelding status along the way, then so be it.

The level of sex appeal expected of an expensive, high-performance Italian car oozes from the Giulia’s sculpted curves. The Quadrifoglio Verde upgrade piles on the testosterone with an angry-looking front bumper underlined by an active front aero splitter, a massive rear diffuser straddled by Ferrari-like dual exhausts and a bonnet and roof made from weight reducing carbon fibre. 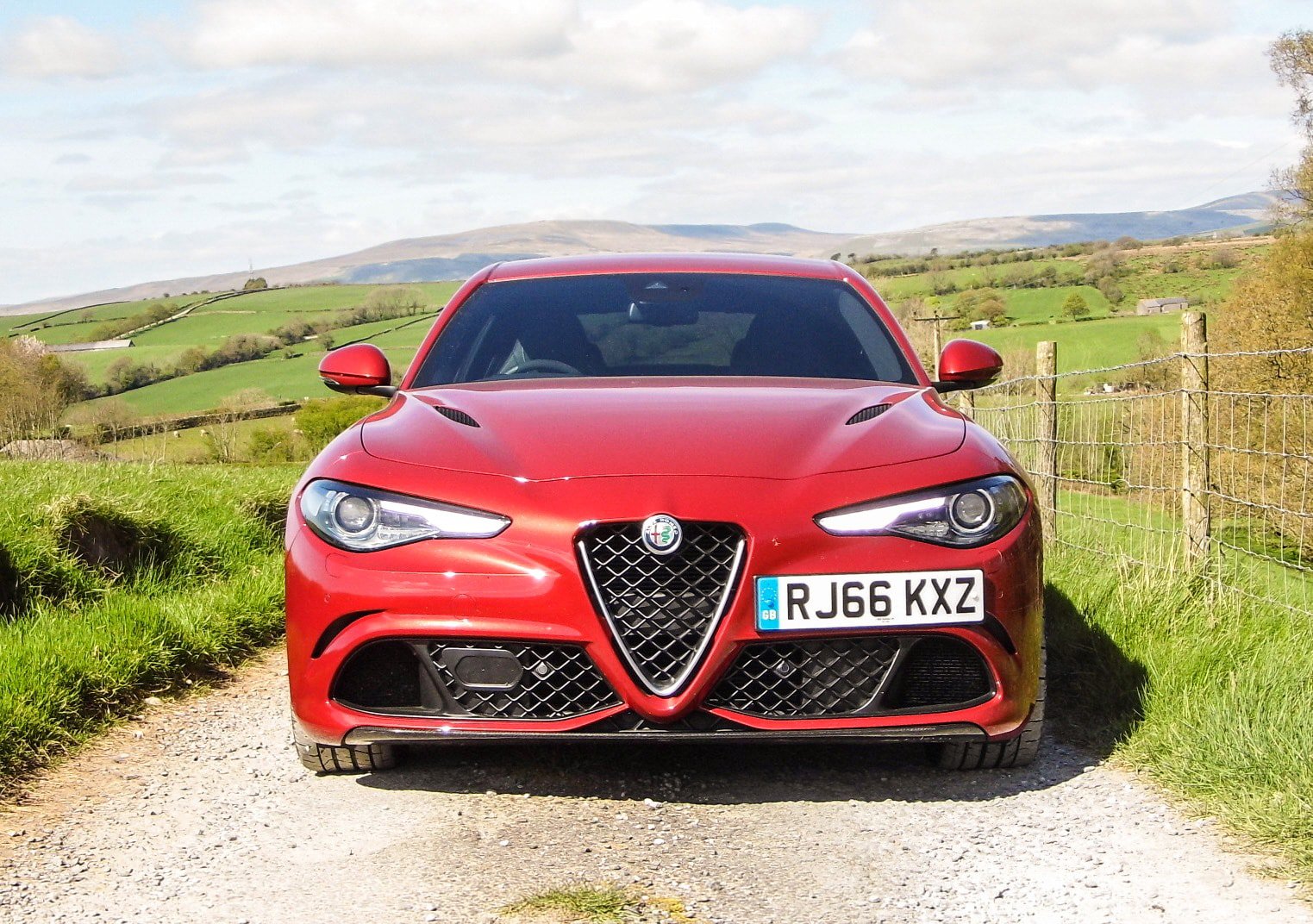 That twin-turbocharged V6 is a potent power plant. You won’t hear Alfa Romeo admit it, but it has the same bore and stroke as the V8 in Ferrari’s 488 GTB. The Alfa’s V6 is pretty much the same thing only with two cylinders lopped off. Performance from the engine is staggering, generating more power at 503bhp than the M3’s 437bhp and also more torque at a whopping 600Nm. It sends that power exclusively to the rear axle, via an eight-speed ZF automatic transmission. Off the line, 62mph arrives in a blistering 3.9 seconds and will peak at an unshackled 191mph.

The test car was fitted with optional carbon-ceramic brakes and carbon fibre Sparco buckets in the front. As I set off, the brakes felt alarmingly soft on a cold Yorkshire morning and continued to do so until I could get some degree of useable heat into both them and the fat Pirellis. Fortunately, I was heading for the Dales where stupendous roads and little traffic awaited. However, until I got there, conditions gave me an opportunity to drive the car ‘normally’. 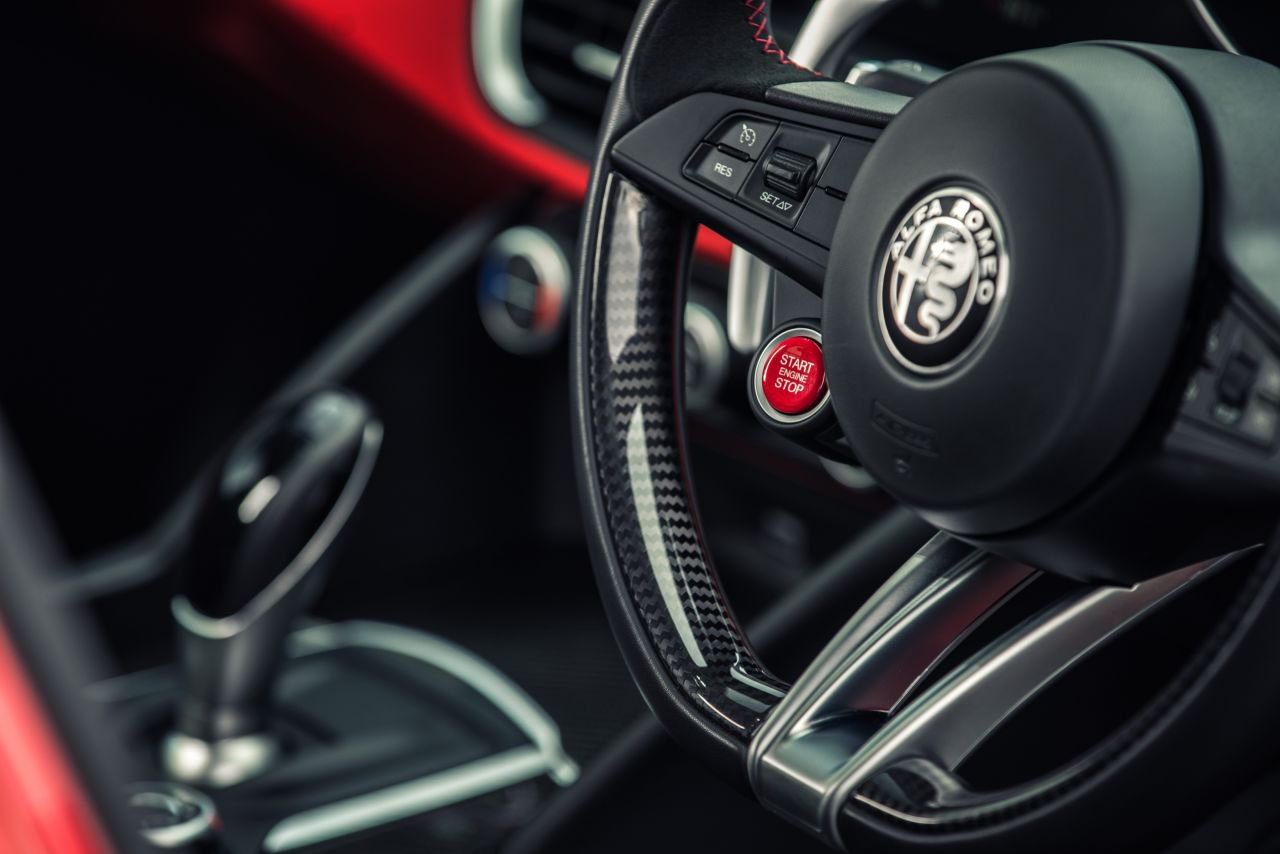 On most so-called performance cars and SUVs, driving modes such as ‘Eco’, ‘Normal’ and ‘Sport’ do little more than make the steering and throttle response feel more aggressive–largely at the expense of balance–while creating a perception of performance gains. Not so, on the Alfa.

The standard Giulia offers a choice of progressively more relaxed ‘Dynamic’, ‘Natural’ and ‘Advanced Efficiency’. However, on the QV you also get ‘Race’ mode.

These modes actually–and dramatically–change the ride quality, driving characteristics and soundtrack of the car, switching between a comfortable and liveable executive saloon, to a vicious, track-ready M3 muncher at the turn of a dial, all in the same car. This genuine versatility and almost schizophrenic range of character is perhaps what impressed me the most. 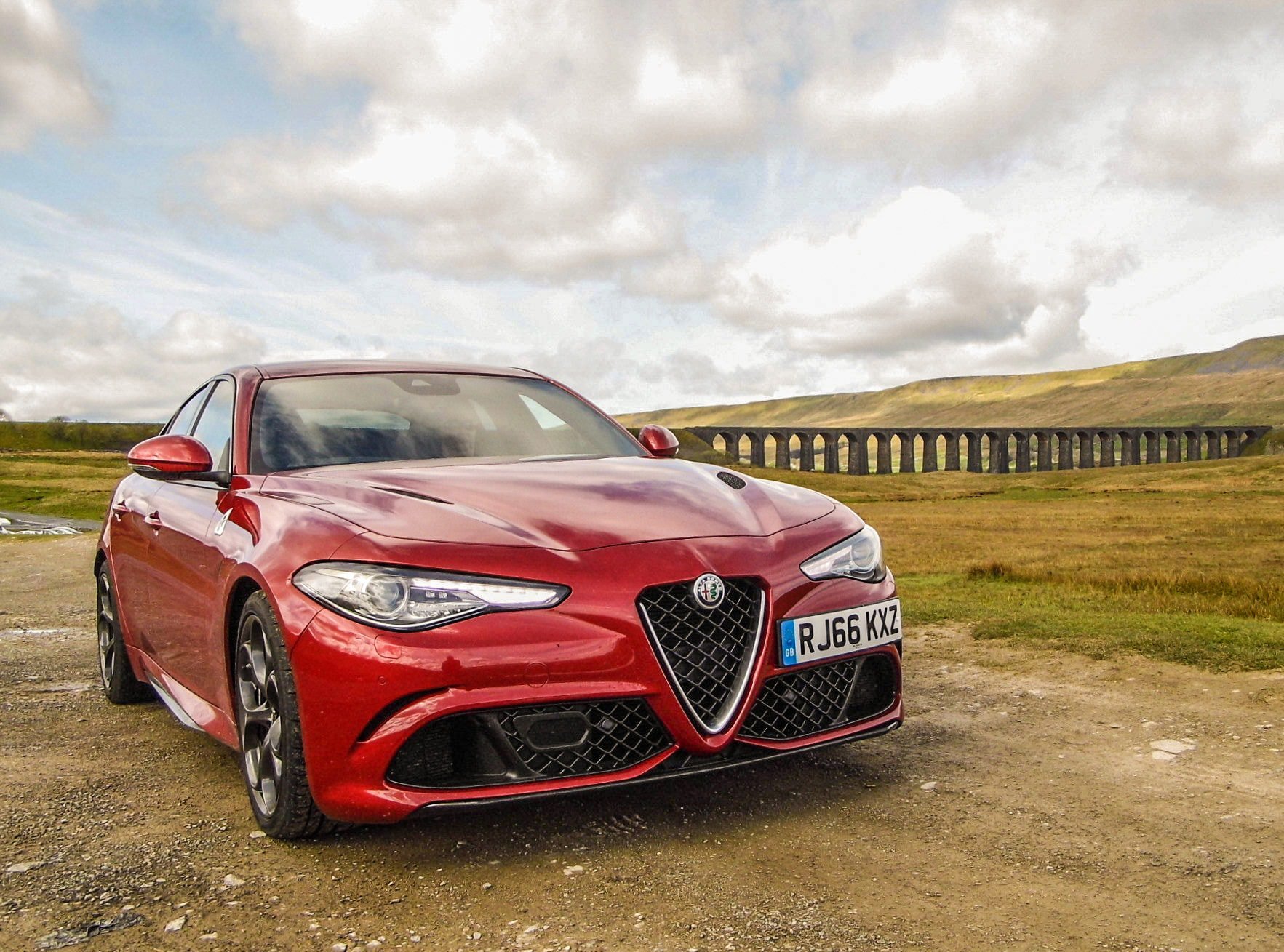 As I left the valley floor behind and made my way up through the foothills of the Yorkshire Dales, I clicked the drive mode from ‘Natural’ to ‘Dynamic’. With some heat in the engine, brakes and tyres, it was time to see what five billion euros and 800 engineers and designers felt like.

The acceleration is so hard that each lightning fast upward shift from the deliciously oversized flappy paddles felt like a mule kick in the back. The twin turbos wind up 35psi of boost and it’s not until second gear that it rushes in proper. Suddenly, it’s time for third, fourth, fifth, sixth as scenery screams by. Along a half-mile straight, I brace and slip into ‘Race’ mode. I feel everything change but I don’t have time to analyse it. 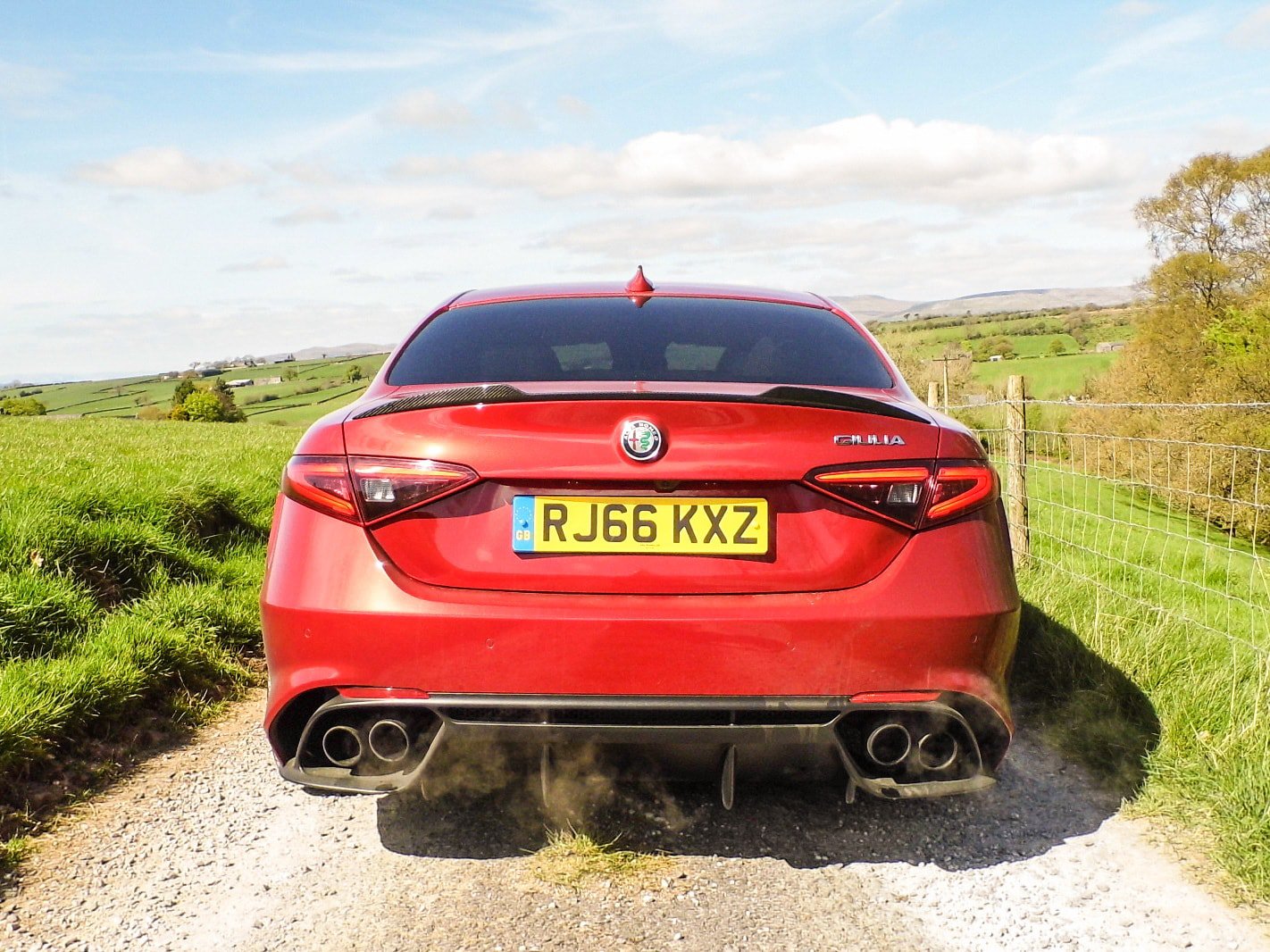 Ahead looms several black and white chevrons indicating a sharp turn to the right. Fortunately, I have clear line-of-sight to the other side as the road sweeps left, upward and away. Just ahead of the chevrons, I stand on the brakes, double shift down and ease in the power mid-S, air kissing the dry stone walls as I straight-line the bend. Not so much as a fidget from the Alfa.

As I scrambled through the tightest corners gaining altitude, it became clear to me that this was different from the M3. The Beemer felt harder, firmer, more planted…but in a rather coarse way. The Alfa is just as nimble, equally adept but slightly more agile, changing direction without the Beemer’s raw aggression and with considerably more collective composure.

The front aero splitter is active in that it lowers at speed to create additional downforce for faster cornering. I’d like to report that I felt the difference, but I was busy. 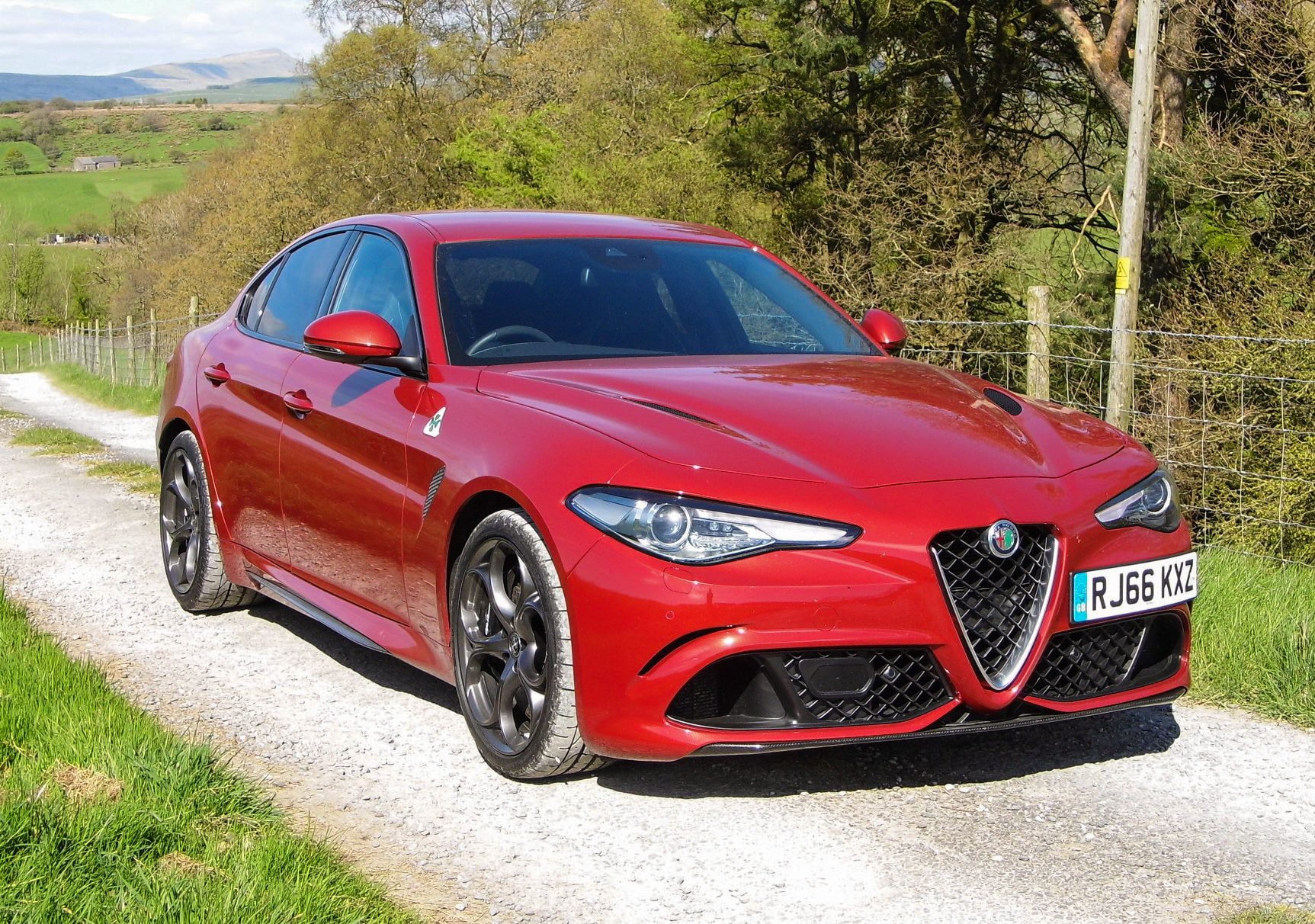 Niggly nagglies include excessive road noise, but the set of Pirelli rubbers can take the blame for that. Thick A and B pillars render front and side visibility far from perfect and the indicators often refused to cancel out. But these are small things and you soon get used to them.

It is fortunate for the Giulia QV that it looks fantastic and drives brilliantly, because the interior is the sole reason it doesn’t receive a full five stars. Sure, there’s probably the most perfect driving position ever, plenty of space for passengers and their luggage and a plush, leather-clad interior. 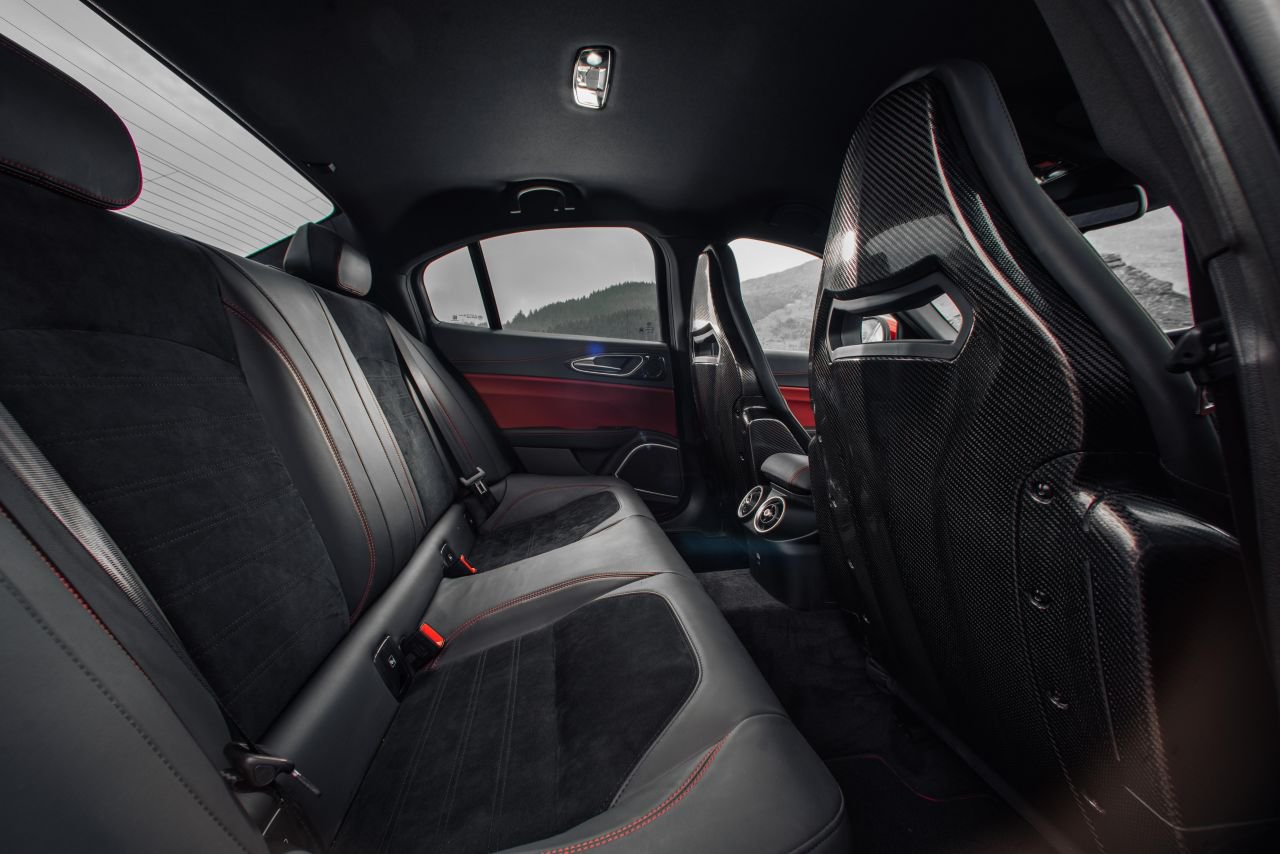 It’s just a pity that some of the switchgear feels Fiat-cheap and the non-touch infotainment unit a bit below par on a car that costs upwards of £60,000.

Being the nature of the beast, the Giulia QV is a thirsty creature. Official (combined cycle) fuel consumption is 34.4 mpg, but during the test week, I covered 584 mixed miles and achieved 28.8mpg. Average speed over that distance was 36.2mph.

Emissions are a reasonable 189g/km CO2 which is no worse than many of its rivals. Being a high performance car, it’ll cost a few pretty pennies to keep on the road. (Personally, I’ve never spent so much of my own money refuelling a test car.)

Residual values are unlikely to be as sharp as its Germanic rivals either, although a five-star Euro NCAP safety rating suggests it’ll be as safe as them. The Quadrifoglio Verde is a worthy flagship for the Giulia range, which just happens to be the best Alfa Romeo in a generation. It’s not perfect, but that feeling, that exhilaration, that magnificent drive is all that really matters, particularly on a car so heavily stickered with Ferrari fingerprints.

Click here to see our latest deals on this fantastic vehicle!

In celebration of Alfa Romeo’s 110th anniversary, the Italian...

When the regular Mercedes-Benz E-Class doesn't do it for you, the...