Many car-makers take a regular model – usually an estate – from their popular line-up, jack it up an inch or two, bolt on some plastic cladding around the wheel arches, add front and rear (plastic) scuff plates and a pair of roof rails and voila!, you have a supposedly rugged ‘active’, ‘all-road’, 'lifestyle' or ‘active tourer’ type of car, perfect for both town and country…but, in reality it's usually just town.

Don’t get me wrong, I don’t mind the idea at all. In fact, I rather like it when it’s done properly. It’s just that some manufacturers ‘do it’ better than others…way better, actually. 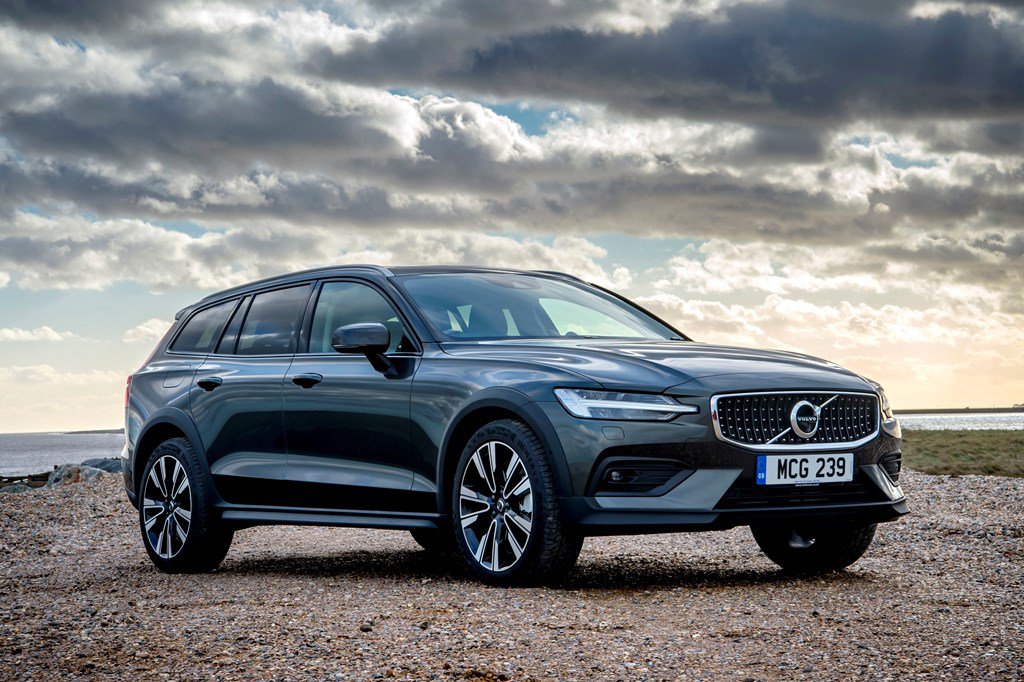 It looks and works a treat. Little wonder then, that the Cross Country is expected to account for ten per cent of all V60 sales in the UK. 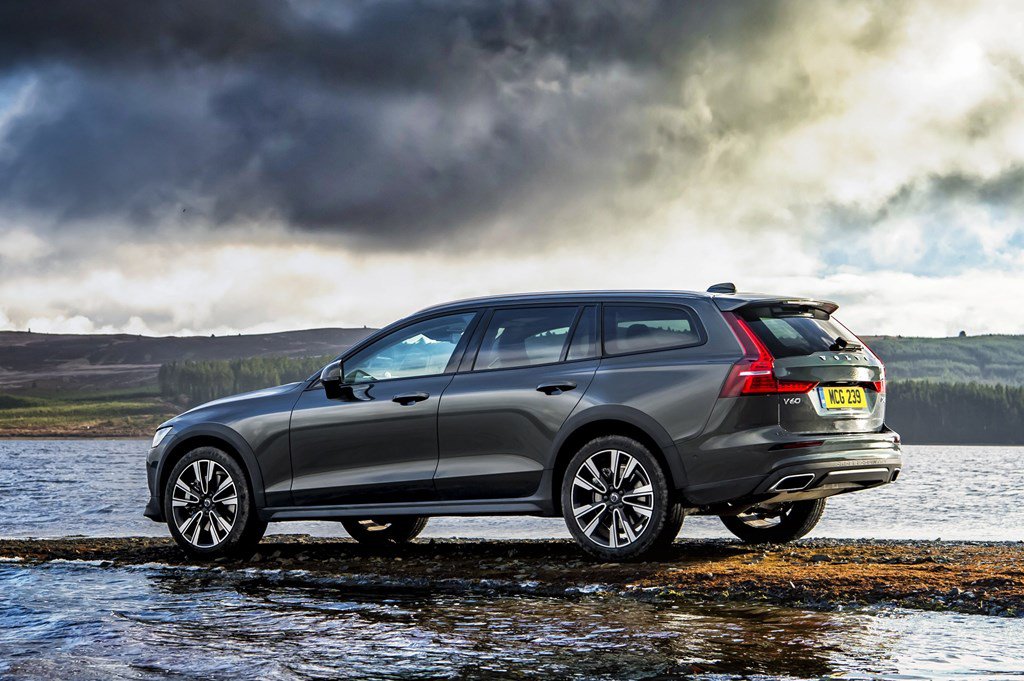 Inside the V60 Cross Country, there is little change from the regular V60 which arrived in early 2018. It’s everything we’ve come to expect from the current generation of Geely-backed Volvos – a clean-cut Scandinavian design with most functions controlled through a responsive portrait touchscreen that dominates the centre console. The standard driver’s seat is extraordinarily comfortable, but power adjustments remain on the options list. There’s loads of movement to the seat and steering wheel, the pedals are perfectly aligned with both and the driving environment is becalmed and wonderfully natural. It’s a pleasing contrast from the Audi A4 Avant, Mercedes C-Class Estate and BMW 3 Series Touring, each of which serves up slightly offset pedals and/or bulges in their transmission tunnels. Material quality is superb and build quality trumps that of the C-Class and 3 Series. What’s more, despite a minimalist Scandinavian design, the interior feels sumptuous, light and airy and makes its German equals appear a little Gothic by comparison.

Volvo made a welcome return to form when the regular V60 was released, ditching the curvy shape of the previous iteration to maximise boot space. Behind row two there is a very useful 529 litres of space, which is more than its primary competitor, the Audi A4 Allroad. 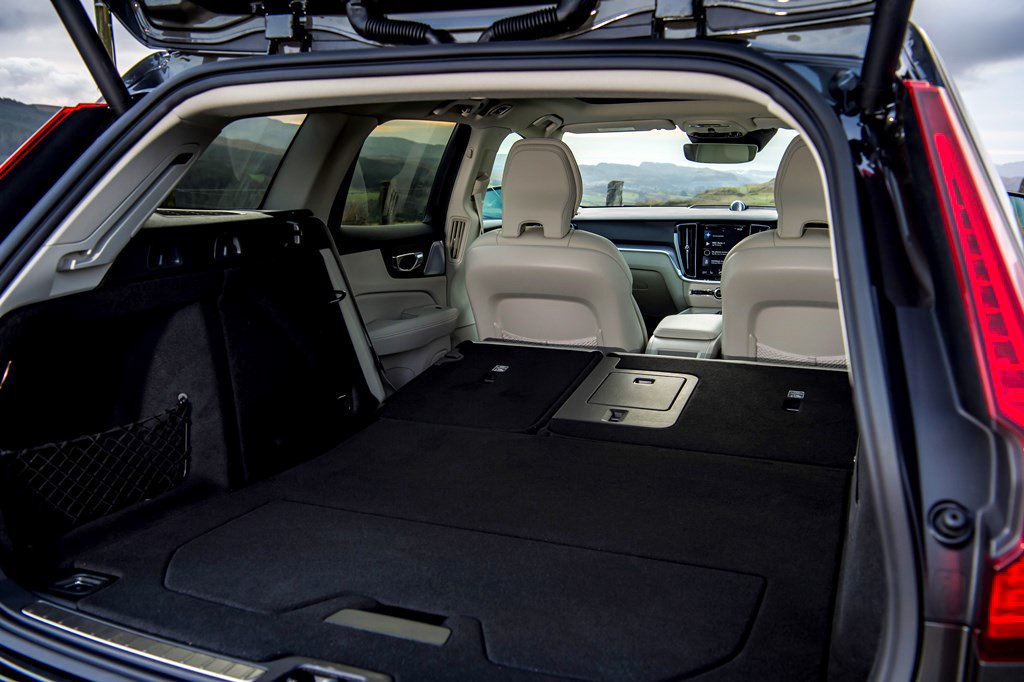 Fold the seats down and 1,441 litres is available for longer items. Extra neat touches include its flush loading boot lip and the pop-up luggage divider that you can strap shopping to, preventing it from moving around when driving. Unlike the V60’s full range of Momentum, R-Design and Inscription trim lines, there is just the one Cross Country trim line called the…er, Cross Country.

Based on the generously-equipped and range-entry V60 Momentum trim line, the Cross Country is an awful lot of car for the money. In addition to wearing the external cosmetic and technical additions mentioned above, it also comes with speed sensitive steering, cruise control, hill start assist, drive mode settings, keyless start and a dynamic chassis. 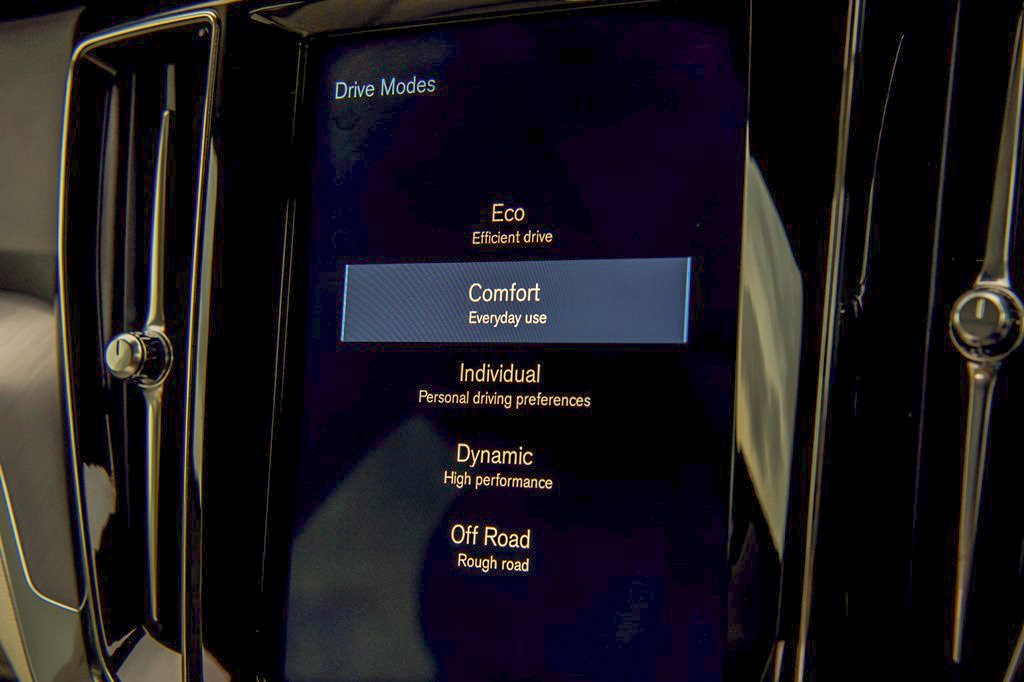 However, many of the toys you might really want remain as packs on the options list, such as the Winter Pack which offers heated front seats, heated windscreen, a headlight cleaning system and heated wipers. 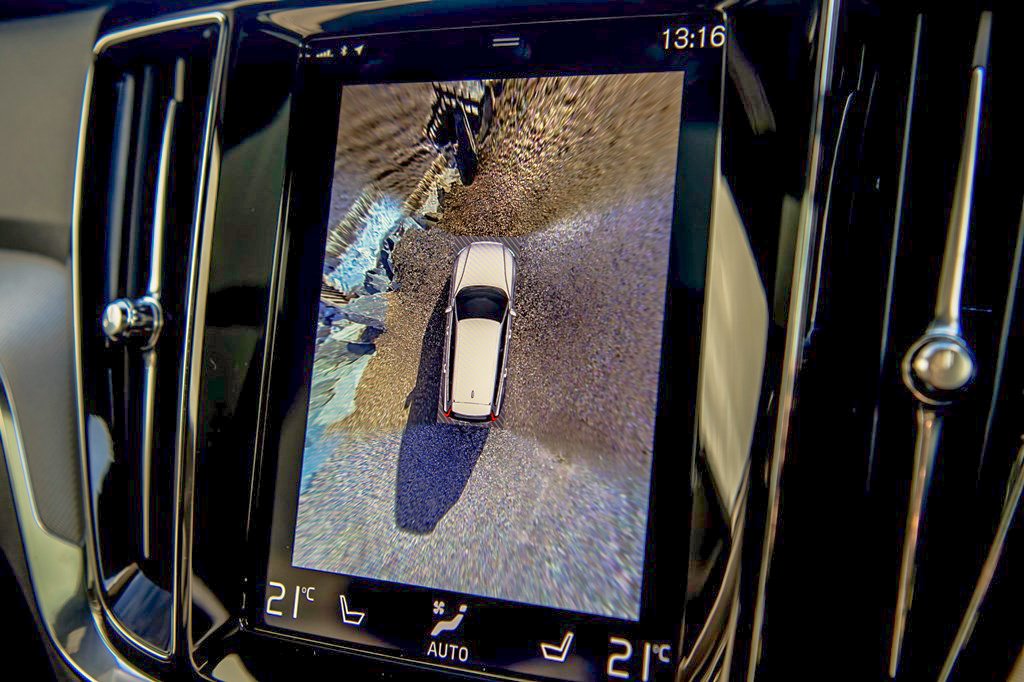 Unlike the single trim level, the Volvo V60 Cross Country is offered in two engine and transmission configurations – a petrol and diesel engine, both of which send power to all four wheels via an eight-speed automatic gearbox.

The 190hp and 400Nm twin-turbo D4 diesel engine (as tested) is my pick of the regular V60 range – if only for strong load lugging duties – and here again proves a fine fit for the Cross Country. Although the 2.0-litre doesn’t feel quite as potent as engines fitted to the C-Class estate and A4 Avant that on paper have similar power outputs, the D4 still displays plenty of low and mid-range punch, making regular driving a breeze. Should you need to overtake, there’s ample power to get past slower traffic. 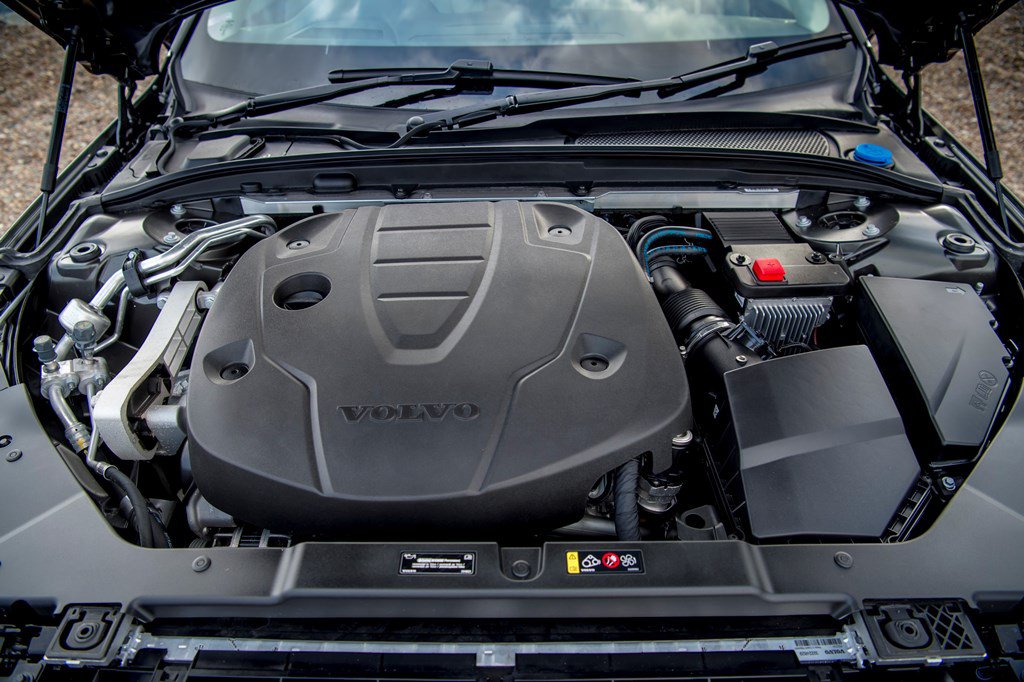 Using the standard 18-inch wheels, the benchmark efficiency figures for the D4 are 55.4mpg combined cycle fuel economy, with CO2 emissions of 135g/km.

For those who prefer their engines to be petrol powered, there is the 2.0-litre 247hp T5 petrol. It’s refined enough at low revs, although not especially smooth when asked to press on. 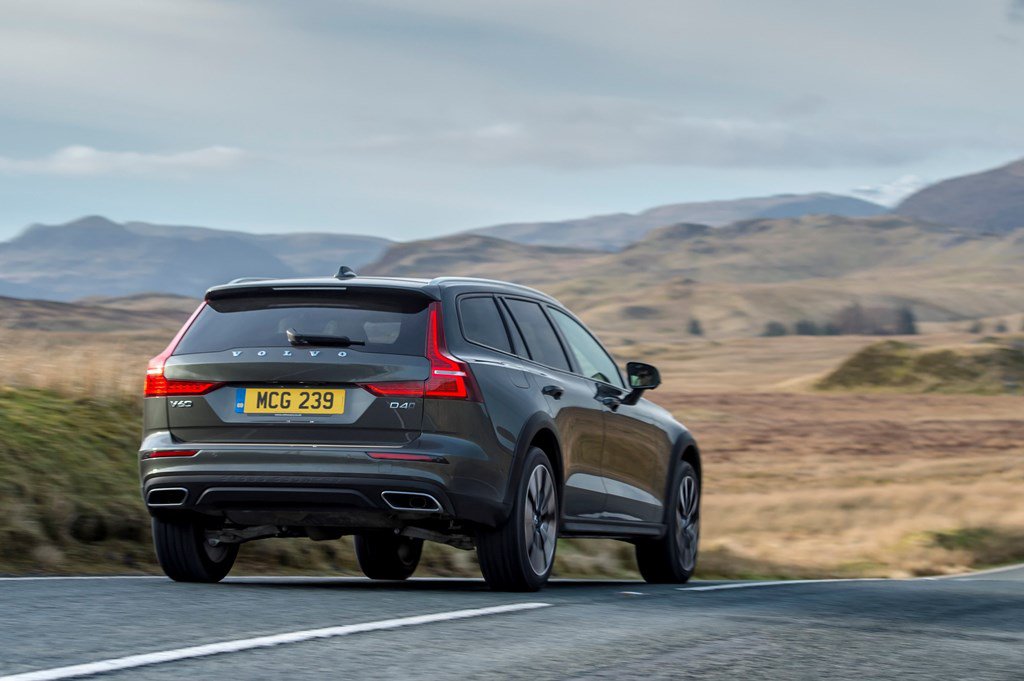 Thanks to the softer suspension set up over the standard V60, the V60 Cross Country’s ride is very impressive in a soft-edged, wafty sort of way which is exactly what you’d want from five-seater family estate, plus have the ability to journey a bit further from the black stuff than its regular estate car competition. 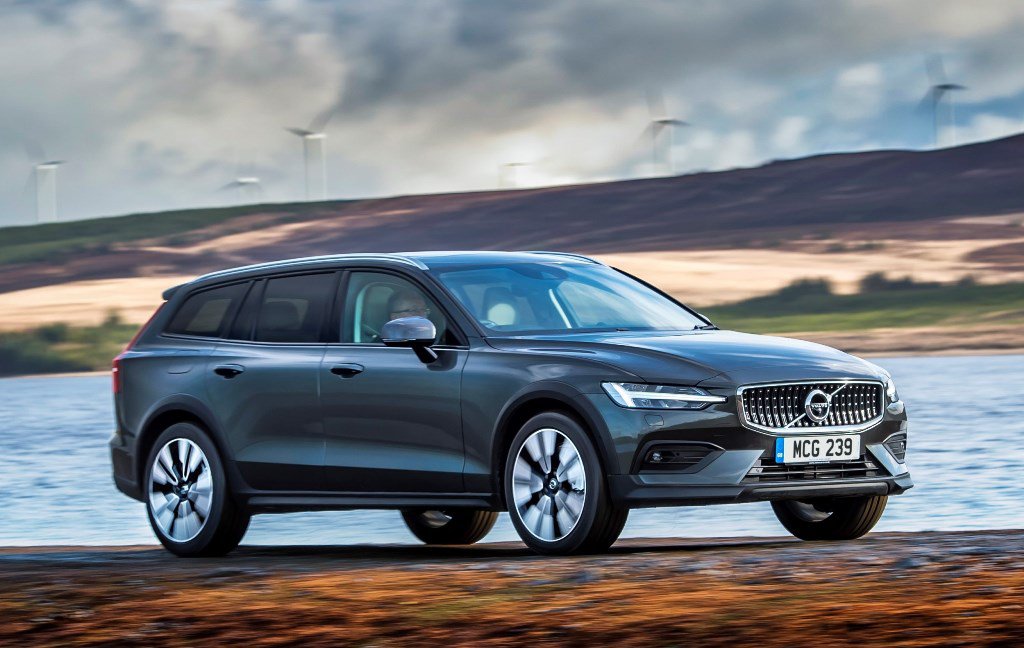 On rolling rural roads and lanes, the V60 Cross Country walks the tight-rope spanning the gorge between cushioned, duvet-like comfort on the one side, and tight, controlled body movements on the other with impeccable balance and finesse. It’s soft and forgiving enough to smooth out fast compressions in near-graceful fashion, but not so spongy that it becomes a blancmange-like liability in the bends.

The effect is that the V60 Cross Country never really feels anything less than resolutely surefooted. As with the regular V60, its steering rack is still a touch too light and by no means communicative. 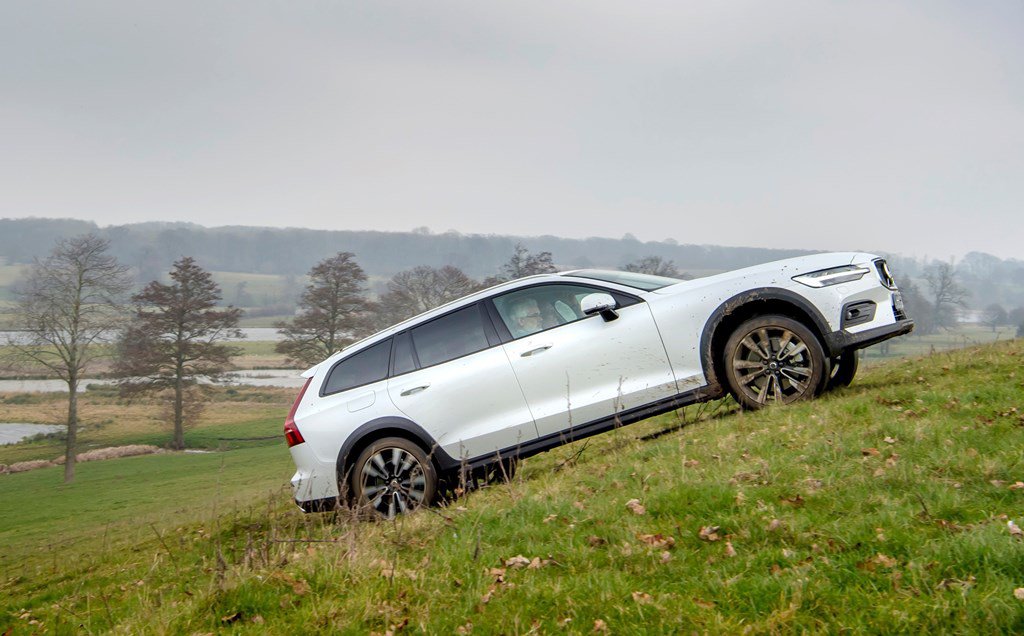 The standard eight-speed auto makes for a relaxing drive around town but it’s slow to respond when you want a quick burst of acceleration, which can be frustrating when you want to pull out at a busy roundabout with its all-or-nothing delivery.

The Cross Country's extra height and four-wheel drive does affect fuel economy. According to the latest WLTP testing procedure, the D4 as tested can return 47.9mpg with 18-inch alloy wheels fitted and it emits 135g/km, resulting in a 35% BiK band. A drop to 42.8mpg and emissions of 143g/km (36% BiK) could be enough to dissuade you from ticking the 20-inch alloy wheel option box, though. Fitted with the same engine, the standard V60 can manage up to 55.4mpg with emissions as low as 117g/km

The premise behind the V60 Cross Country is that it will get you and yours far enough off-road to enjoy that active, adventurous lifestyle you seek. Like every other V60, you can choose between different drive modes to suit your preferences and road conditions. However, as well as Comfort, Eco, Dynamic and Individual modes, the V60 Cross Country also has an Off-Road mode.

This works at speed below 25mph and the engine, gearbox, accelerator and all-wheel-drive system are optimised for slippery surfaces. This all means the car is a pretty capable 4×4 estate. Sure, journeys across Tanzania’s Serengeti National Park might be beyond its remit, but trips across muddy fields to the best fishing spots, or traversing the more challenging of green lanes should prove well within the Cross Country’s capabilities. Volvo’s large family estates have always been renowned for their towing capabilities and the Cross Country is no exception. It will haul a braked trailer of up to 2,000kgs (750kg un-braked), which is more than enough for a large caravan or a horse trailer complete with horse, hay and kit. 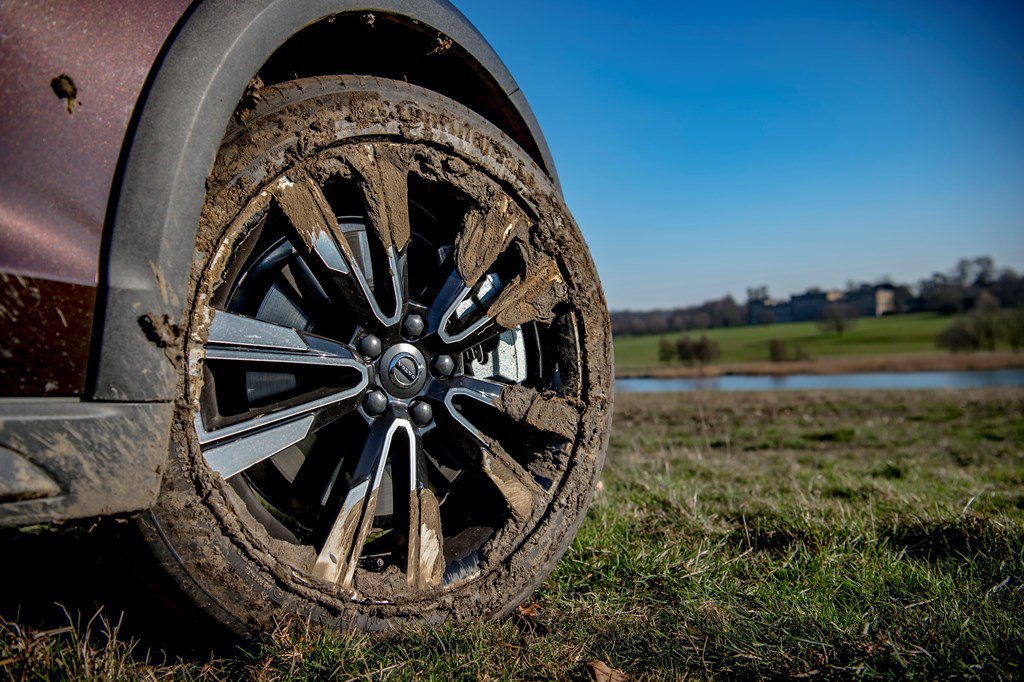 As you’d expect, Volvo and safety make fine bedfellows. The new V60 Cross Country is at the forefront of modern technology when it comes to collision prevention and passive safety features. As a result, the regular V60 estate racked up another impressive five-star score in Euro NCAP crash tests, with a near-perfect 96% score for adult occupant protection. What I like most about Volvo's Cross Country models is that they’re, well...different.

The V60 is arguably the best example of the Cross Country package yet. It’s a better drive than the larger V90 and I think it looks better, too. It might not be too different from the standard V60 estate, but that's because the V60 is an extremely strong foundation on which to build.

All it takes is the classy application of a little more ride height and some tough-guy style. The Cross Country package makes the Volvo V60 more appealing than ever before. Showing its age now, but is it still a contender?

On image, quality and all-round liveability, the Audi A6 Avant remains...