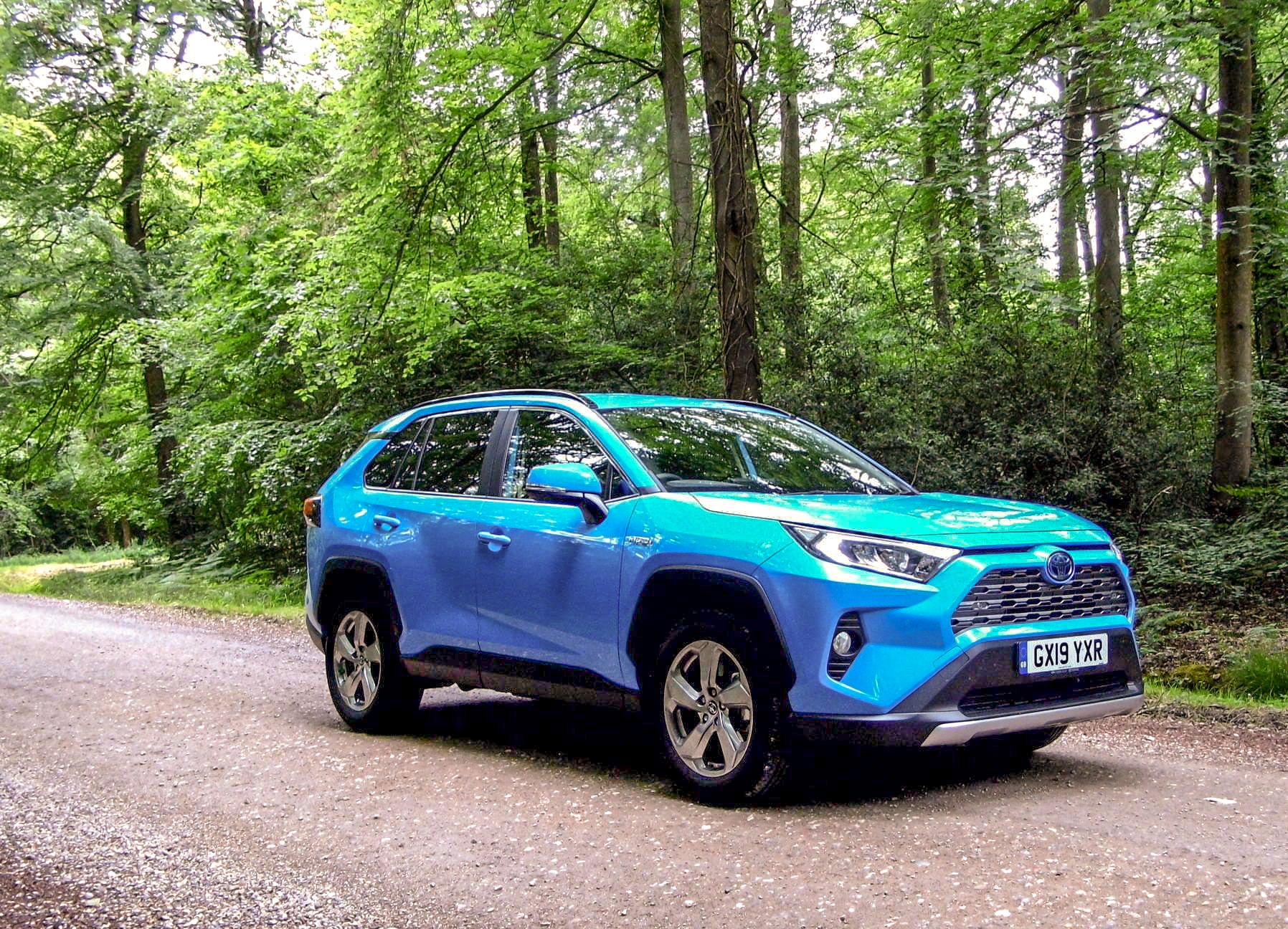 ‘From the ground, up’, ‘New’, ‘All-new’, ‘Completely redesigned’, 'Blank sheet of paper', etc. These are terms you’ll hear often in the automotive industry.

In the case of this fifth generation Toyota RAV4, we’ll have to tick the ‘all of the above’ box. Aside from the chalk-and-cheese visual differences, all the mechanical underpinnings replace those that had been around on previous RAV4 iterations for thirteen years.

The new RAV4 debuted in March 2018 at the New York auto show. It is based on the front-wheel-drive Toyota New Global Architecture (TNGA-K) platform, which is also shared with the eighth generation Camry, the current Prius and CH-R, along with the seventh generation Lexus ES. 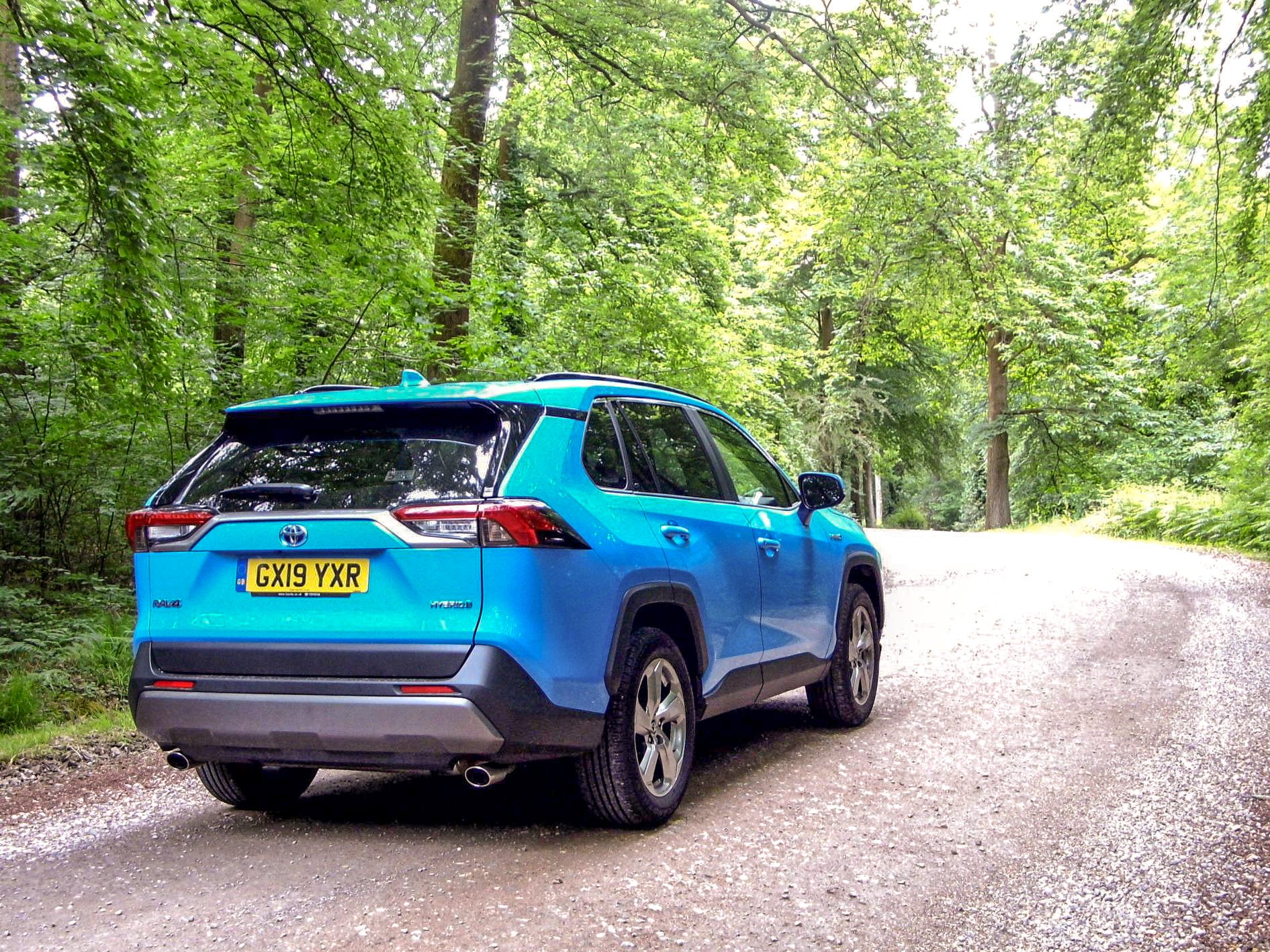 We recently spent a week with ‘YXR’, a front wheel-drive 2.5-litre Hybrid, presented in second-tier Design trim and finished in vivid ‘Cyan Splash.

With hints of the bold Toyota C-HR crossover and sporting a more sculpted, chiselled look that could well have derived from a Lexus drawing board, the new Toyota RAV4 SUV is certainly more distinctive than its bland predecessor.

The car has better proportions than it used to – it has a longer wheelbase (the distance between the front and rear wheels) but is shorter overall by 11mm. The refreshed RAV4 now competes with its closest rivals in the medium sized SUV market, which is currently occupied by the Nissan X-trail, Renault Kadjar, Skoda Karoq and Volkswagen Tiguan 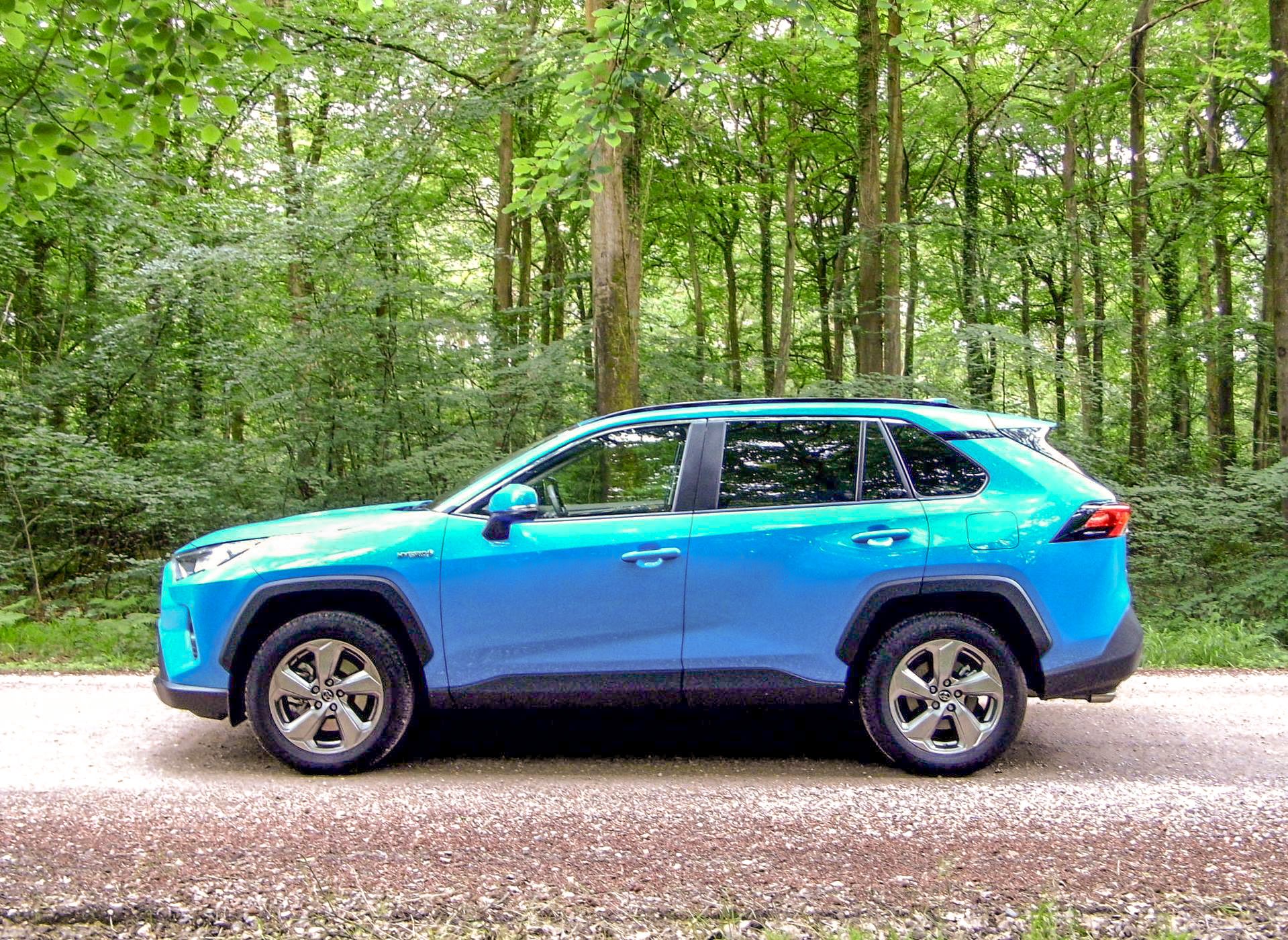 The first impression you get when climbing into the new RAV4 is one of improved quality. Less daring than the outside, the interior is laid out simply and sensibly and you get swathes of soft plastics across the dashboard and doors, and plenty of aluminium-effect trims on the steering wheel, door handles, around the air vents and centre console.

There are a few hard, more durable plastics on the grab handles, around the glovebox and below the central armrest, but on the whole the RAV4’s cabin feels pretty plush and suitably solid.

The heating controls are a nice utilitarian design, allowing easy control without having to look where they’re located, where as the heated seat switches are set back in dashboard centre console, finding their location takes some getting used. These aren’t generally a switch you’ll be adjusting all the time, we’ll forgive Toyota for that one. 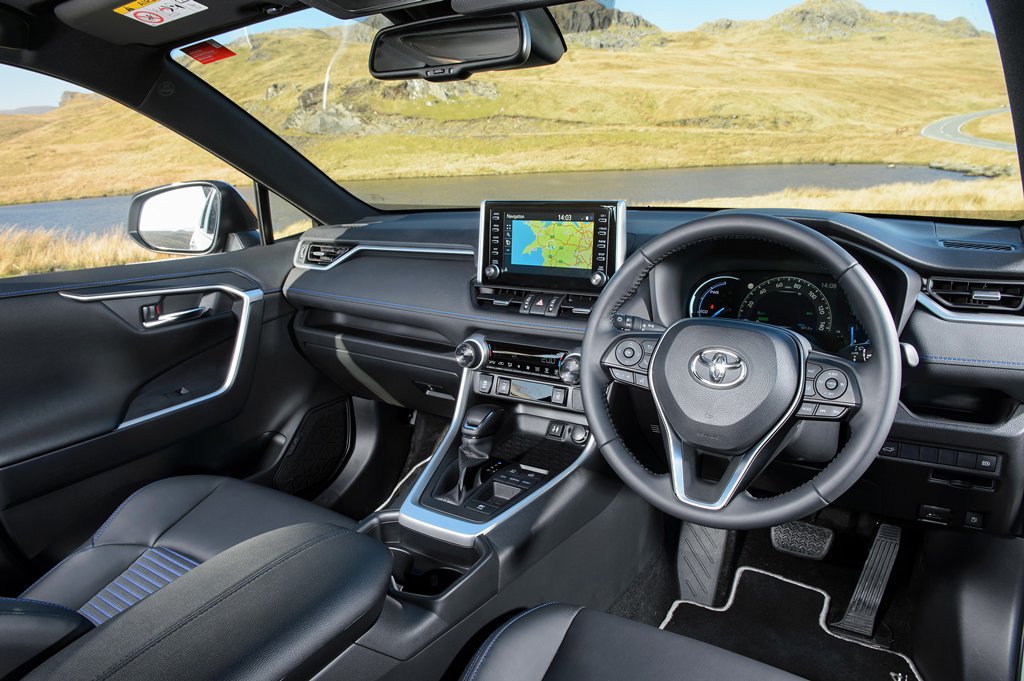 Every Toyota RAV4 comes with an 8-inch touchscreen infotainment system as standard. The screen is bright and relatively easy to read in direct sunlight, but the menu screens need more than a cursory glance.

Navigation is standard in all but entry-level Icon models. It’s relatively easy to input an address and add a waypoint, but the maps themselves aren’t particularly clear. 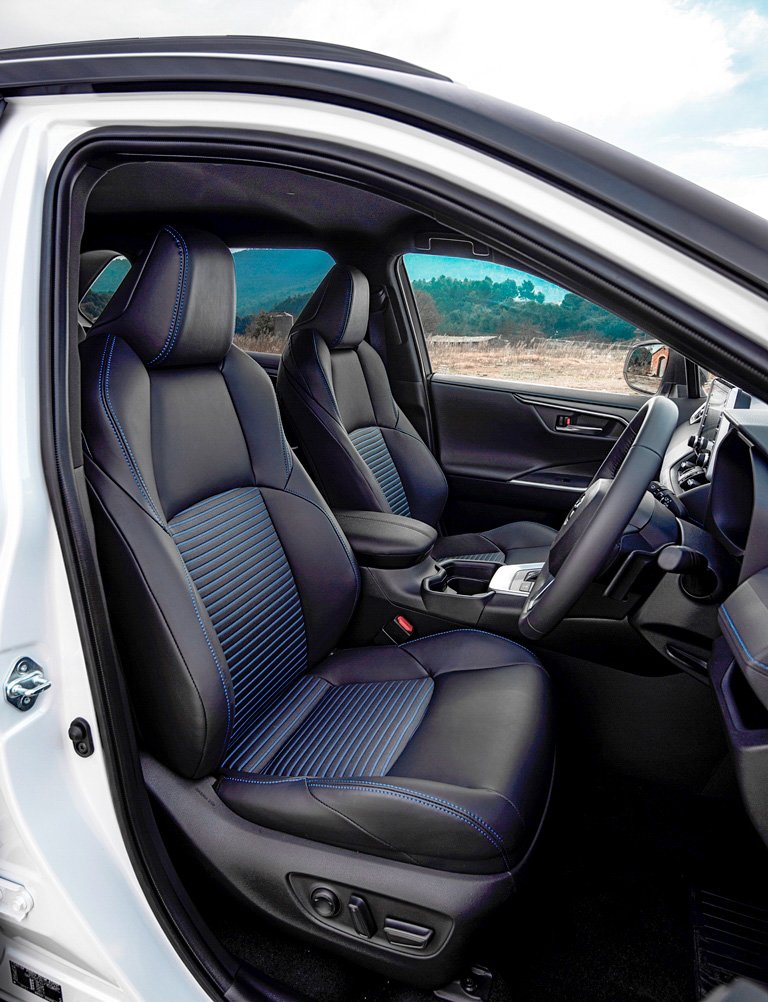 Unfortunately, you can’t mirror your phone’s navigation apps because – like the new Corolla range – Apple CarPlay and Android Auto is not available on the RAV4 range. You can still use the standard Bluetooth connection to play music from your phone through the car’s stereo, though. 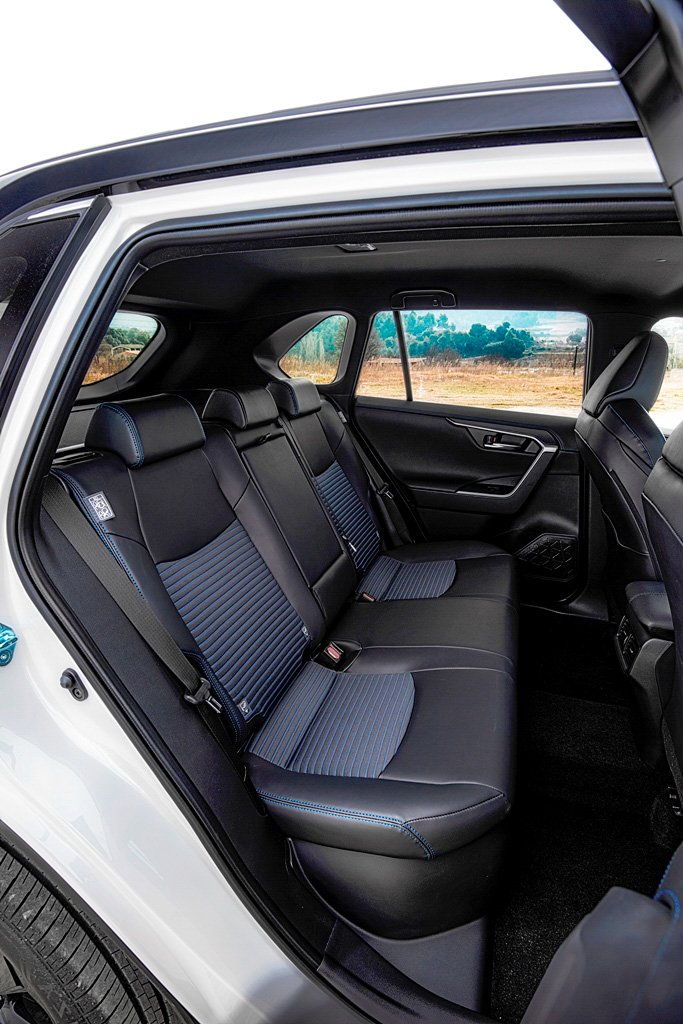 The Toyota wins for practicality, with a powered tailgate standard on the Design trim and above, revealing a sizeable 580-litre boot. A stretched interior also means adults will be able to travel more comfortably in the back. Toyota hasn’t squeezed a superfluous third row into the new RAV4 either as there is no seven-seat option in the new line-up. Sensible, actually. 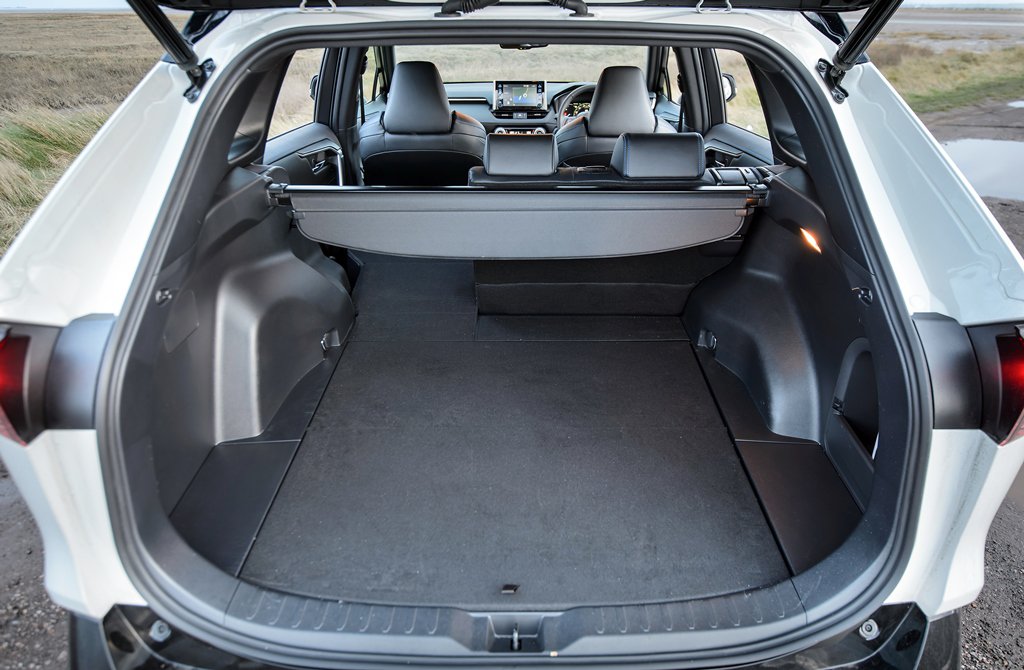 Its boot has expanded by 79 litres to 580, with 1,690 litres of luggage area available when row two is folded down. That should be plenty of space for families and those figures compare well with the 497 litres available in the Honda CR-V hybrid. However, for similar money its hybrid rivals such as the Skoda Kodiaq and SEAT Tarraco offer a seven-seat option and more space. 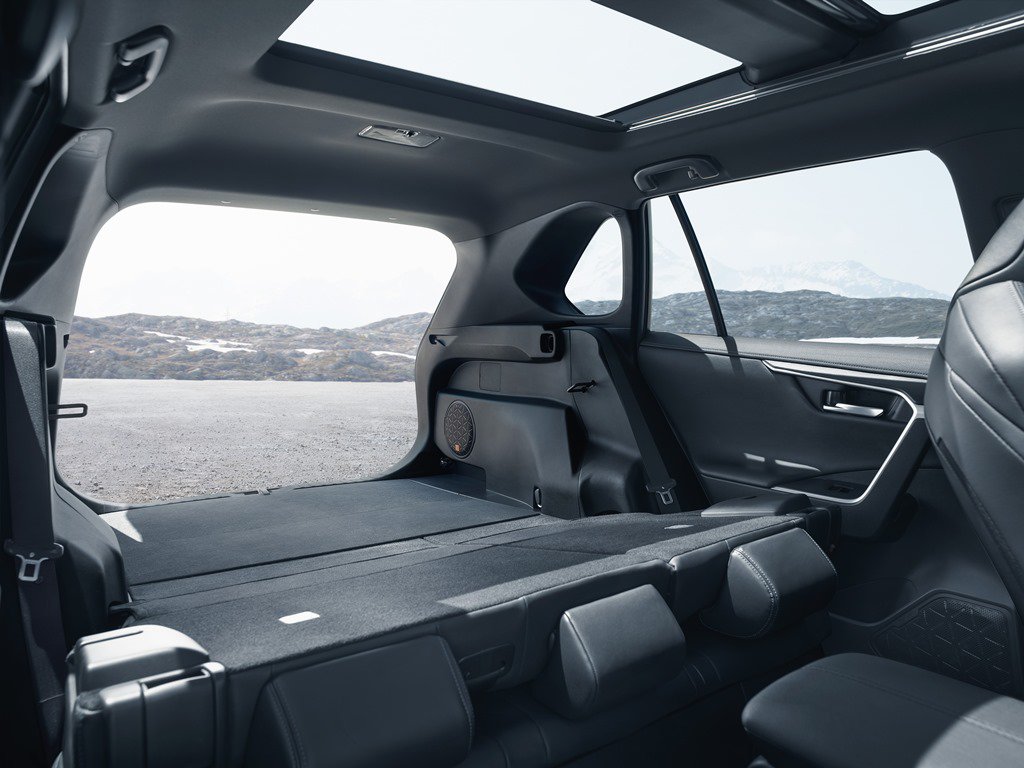 Based on the Design trim, Dynamic models give the RAV4 a sporty look with its black wheels, a black headlining and heated front sports seats. Convenience is also boosted with folding door mirrors and a powered driver's seat, and safety features of blind spot monitoring and rear cross traffic warnings. 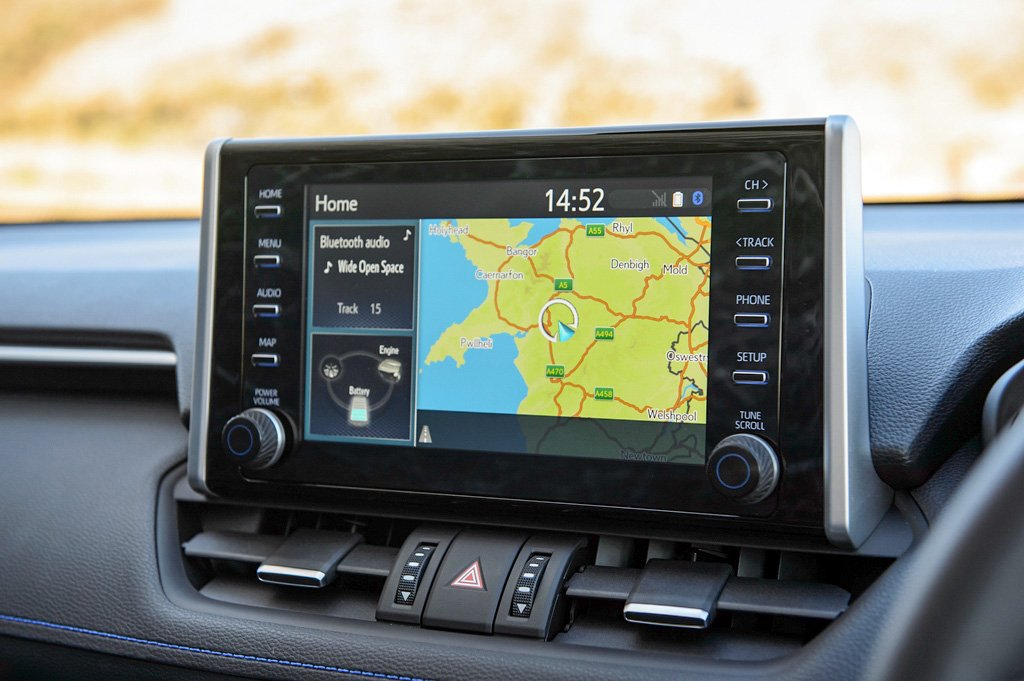 For the UK market, Toyota offers just the one powertrain – a 2.5-litre four-cylinder petrol engine paired with an electric motor. The combination offers 215hp in 2WD models, or 219hp in AWD versions. Because this car is hybrid only, no manual gearbox is available. Instead, there’s a CVT automatic with CO2 emissions ranging from 102 to 105g/km, which should certainly get the attention of business car drivers.. The RAV4 is a regular, self-charging hybrid, not a PHEV. While it’s great for convenience, you can’t go very far on pure electric power. Even with the EV (electric-only) mode selected, you’ll not get further than a few hundred metres before the hybrid system kicks the petrol engine back in to take over propulsion duties.

To be honest, you're better off leaving the RAV4 in its 'normal' driving mode and let the system decide when’s best to deploy the electric motor and petrol engine. In normal mode, electric power is used for stop-start traffic and combined with the petrol engine at higher speeds or sudden bursts of acceleration. 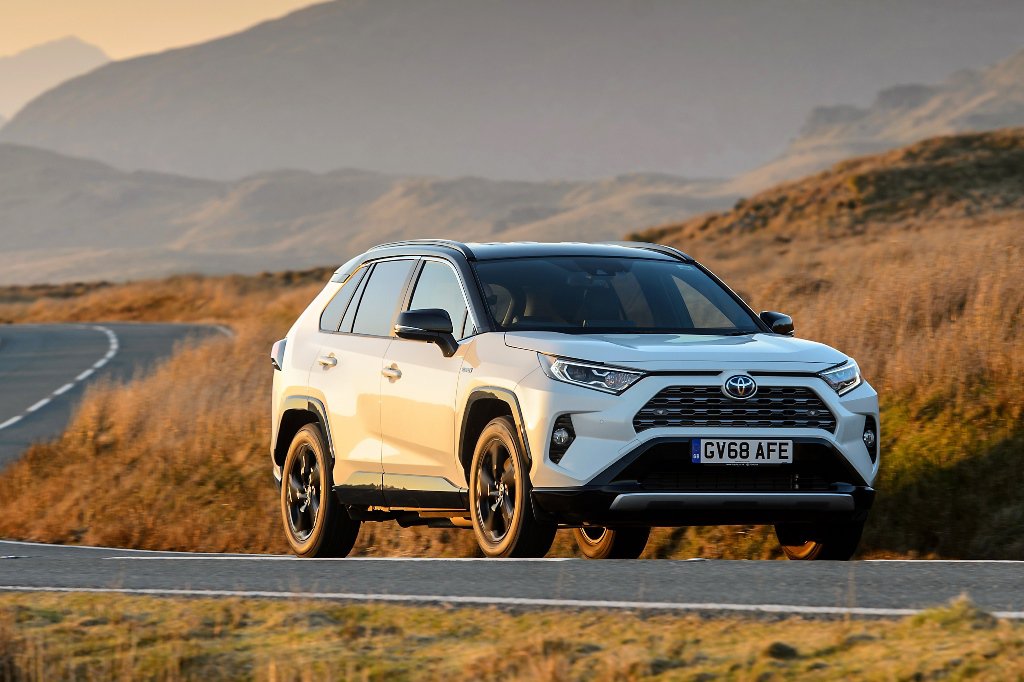 The RAV4 continues to offer an elevated driving position, great for town and country driving, allowing you to see the road ahead, over hedgerows and the traffic in front.

The A pillars are relatively thin and the side windows are nice and large so it’s surprisingly easy to manoeuvre through city traffic.

The steering isn’t particularly heavy and every model gets rear parking sensors and a reversing camera to help make parking relatively stress-free. Pick a Design model or above and you also get front parking sensors. The RAV4 does a good job smoothing out bumps and potholes around town and exhibits little lean on faster country roads. For a high riding family SUV the RAV4 drives well, steering feel is direct, and weighted nicely, giving confidence in the corners.

Settle into an inter-city motorway journey and you’ll find things stay calm and relaxed. One slight gripe from the refreshed RAV4 is the wing mirrors, being so large and angular you might hear a slight whistle at motorway speeds, but you won’t hear much noise from the goings on underneath. Toyota claims the hybrid combination of petrol and electric power lets the RAV4 return up to 51mpg, which would be about right as, during a week of mixed-road driving, we covered 505.9 miles and attained an average of 52mpg. When crash-tested by Euro NCAP early in 2019, the new Toyota RAV4 was awarded a full five stars for safety, scoring 93 per cent for adult occupants and 87 per cent for child occupants.

It comes with plenty of driver assistance systems as standard, too, such as adaptive cruise control, lane-keeping assist and road-sign recognition. You also get automatic emergency braking to help prevent avoidable collisions with other cars, pedestrians and even cyclists. The 2019 Toyota RAV4 offers considerably more substance than the outgoing model. It’s more robust, more efficient, promises more off-road capability and has a chassis agile enough to satisfy most drivers. Overall, the new RAV4 Hybrid is a pretty good family sized SUV and makes a worthy and compelling case for itself.

Browse our latest top leasing deals on the 2019 Toyota RAV4. 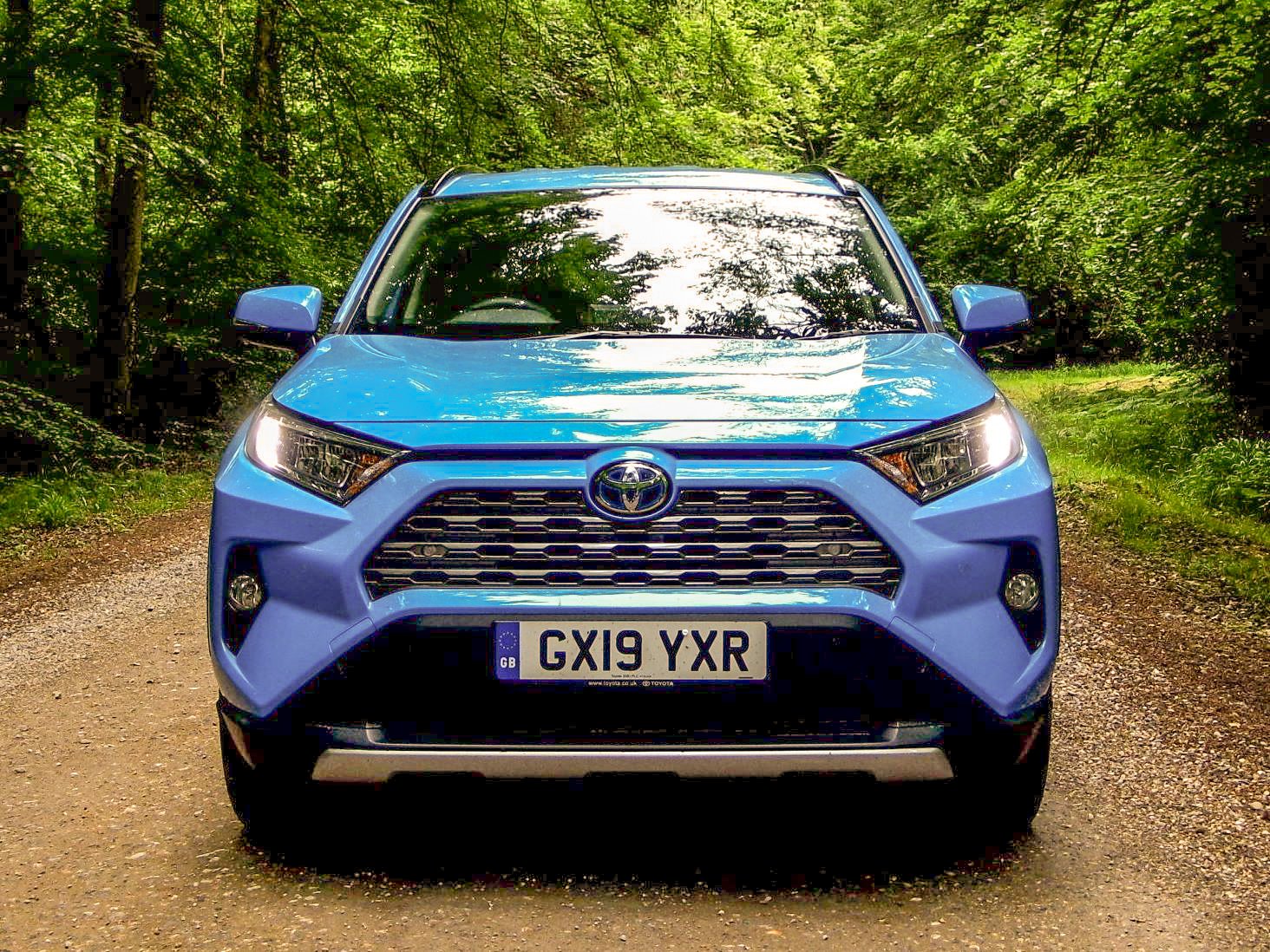