The Suzuki Jimny is a compact 4x4 off-roader, not an SUV as some would have you believe. Essentially, it’s a car definitely built for bruising, not necessarily for cruising. Suzuki’s diminutive 4x4 has been around in one guise or another since 1970. In the intervening years the car has seen surprisingly few big changes. The previous generation launched in 1998 remained on UK sale (42,000 units) for twenty years until production ceased in March this year so the production line could be re-tooled to make way for this new fourth-generation Jimny.

Whereas, the on-road civility of the previous Jimny was awful at best, the new Jimny’s on road manners are notably improved. But it’s off the beaten track where this iconic 4x4 is most at home and nothing else of the Jimny’s size or price will get you further in to the back of beyond, and out again. Last week, I met up with Suzuki Cars UK at Fawsley Hall south of Daventry and nearby Stoneleigh Park to try out the new Suzuki Jimny both on- and off-road and filed this first-drive report and range review exclusively for Leasing Options…

As for the new Jimny’s exterior design, I think Suzuki has got this spot on. One’s first thought is ‘retro’, which is understood due to its upright sides, square edges and sharply angled corners. I love its cubist form especially when finished in one of the funkier colours from the exterior palette. It has several touches from the Jimny long heritage such as the round headlights and stand-alone indicators, features it shares with the original LJ10 from the early 70’s.

The clamshell bonnet and the twin horizontal side-strakes that sit just aft of its shut line at the base of the A-pillar are distinctly SJ410 from 1982. Its five vertical-bar grille and generally less utilitarian looks are where it clearly demonstrates touches of the previous Jimny. While an homage to its noble heritage is evident, this Mk4 Suzuki Jimny has a strong, loveable identity all of its own, being neither too cute to discourage its strong off-road followers nor overly rugged to dissuade tarmac drivers to give it a pootle. I don’t think Suzuki could have done a better job, to be honest.

That the interior of the previous Jimny was in need of a full strip-out and thorough redesign is of course an understatement. Fortunately, Suzuki has avoided gifting the all-new Jimny with more style than substance, but many may still find the Suzuki's interior rather light on kit and ‘luxuries’ compared to true rivals (if you can identify any) and there’s no getting away from the fact that it has been designed and built to a strict budget.

The latest version has made a big step forwards from its predecessor when it comes to comfort, but its deliberately straightforward design both inside and out prevents it from matching more fashion-led and pricier rivals. The Jimny’s square, fit-for-purpose body develops an inordinate amount of wind noise at higher speeds, which joins the tiresome engine buzz and tyre roar to make long-distance motorway travel quite a tiring experience.

However, not only is the latest Jimny more attractive inside than before, it's just as easy to drive and enjoy as ever. Most important controls are chunky enough to use while wearing gloves, while the dials are big, bold and easy to read. Materials used are more pleasant to the touch than before, without feeling any less robust than they need to be. 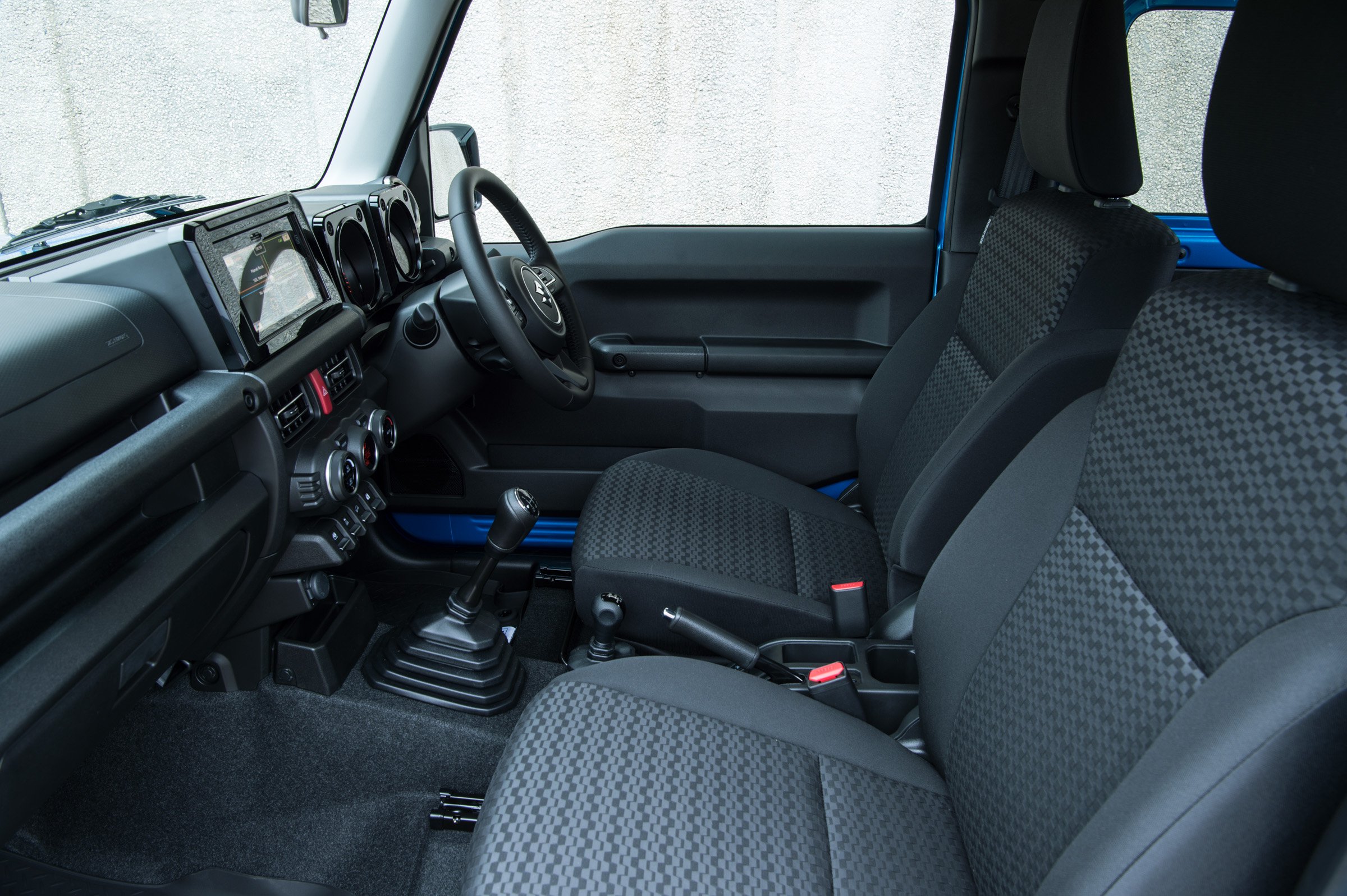 The latest model makes far more concessions to comfort and convenience than before, with climate control and even heated seats available, along with a seven-inch touchscreen infotainment system that's also used in the Suzuki Ignis.

Space for rear passengers has increased significantly but does remain somewhat cosy. The rear windows are fixed closed which some may find claustrophobic. Suzuki would do well to add leading-edge, hinged openings to both rear windows in the future. Boot space with row two in place is a paltry 85 litres, but a handy 830 litres of space becomes available with the rear seat uprights folded to create a fully flat floor, unlike its predecessor.

There’s a small underfloor storage area, plus a series of mounting points below the side windows from which a variety of accessories can be secured – load hooks, tonneau covers, that kind of thing. The trick is to think of the new Jimny as a two-seater with a massive and incredibly practical load area, from which sprout a pair of seats should you so need them.

The 2019 Jimny is offered in just two trim grades; SZ4 and SZ5. You can only opt for the automatic transmission and access the full six-colour paint range if you go for the SZ5. Select the SZ4 trim grades and your exterior colour choice will be limited to white, silver or black, whereas SZ5 buyers also have the option of yellow, ivory or blue with a contrasting black roof. 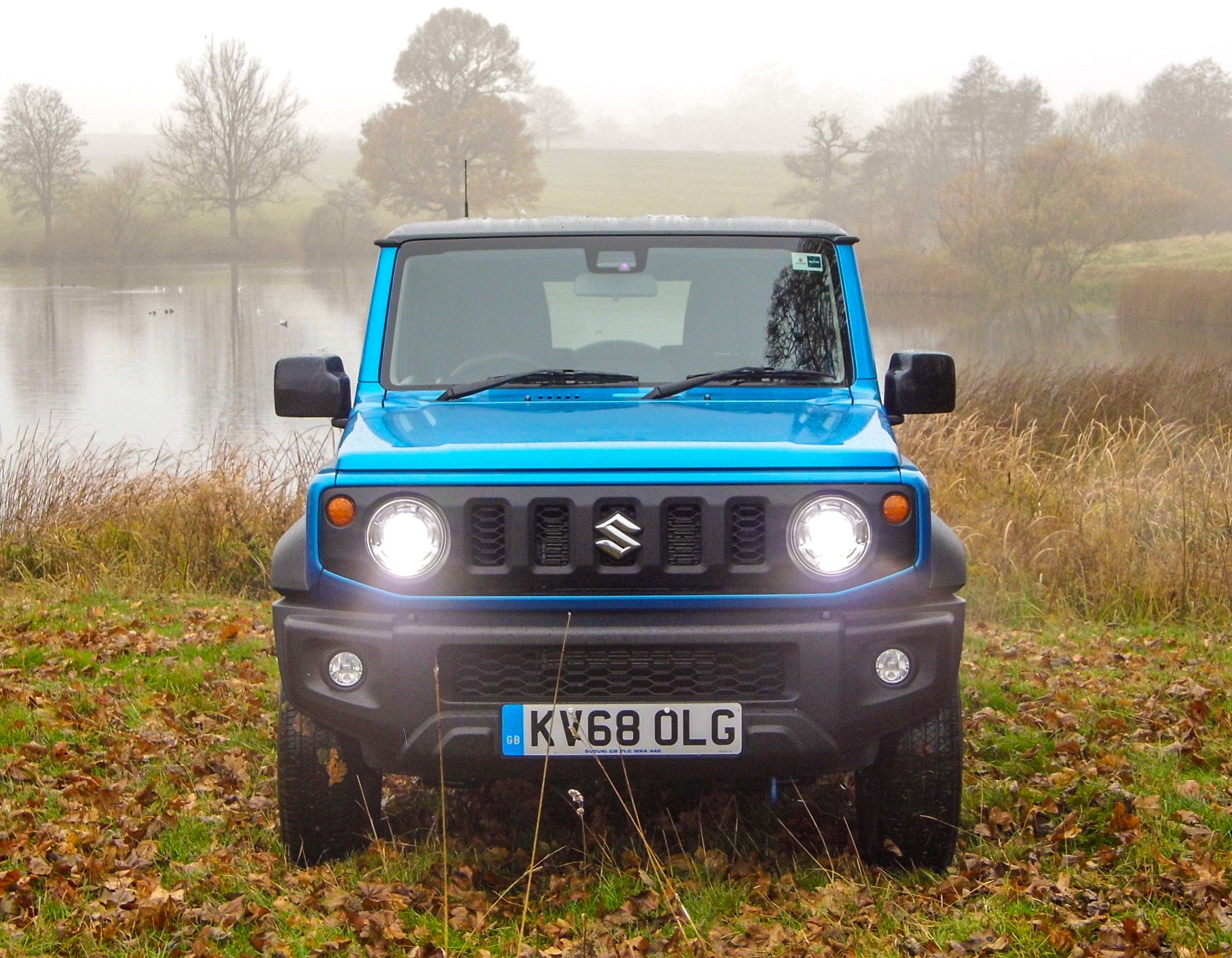 Here, it’s a very much a case of out with the old and in with the new. The latest Jimny is fitted with a four-cylinder 1.5-litre petrol engine, which replaces the ageing and less-efficient 1.3-litre engine used in the previous model. 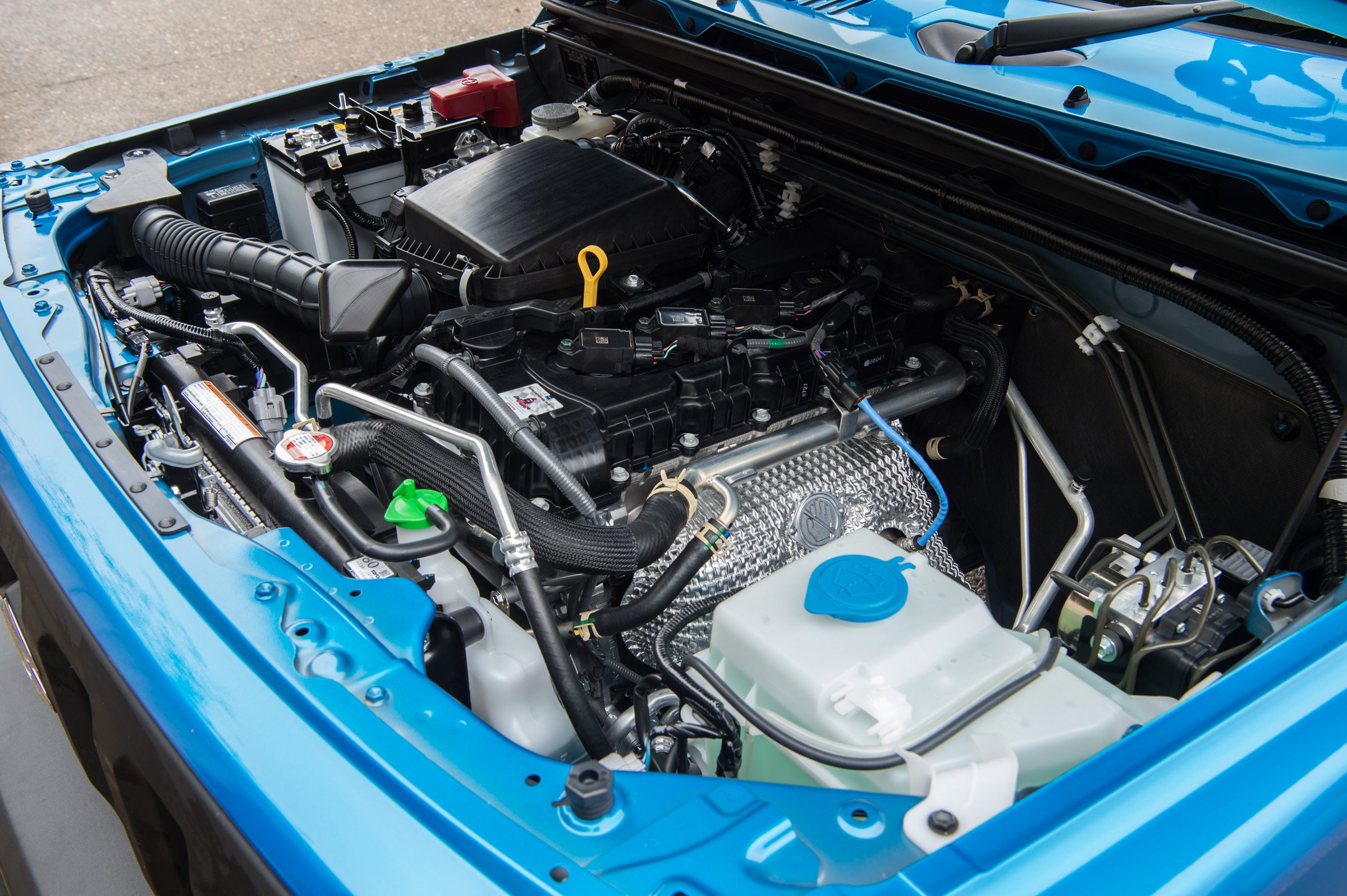 The newer, bigger engine produces 101hp – an increase of 14hp. Acceleration has improved as a result, with 0-62mph taking around 12 instead of 14.1 seconds. While the additional power doesn't turn the Jimny into a quick car, it does make it more capable of keeping up with traffic than before. However, with 3,550rpm showing on the rev counter at 70mph, the Jimny is anything but a quiet cruiser. 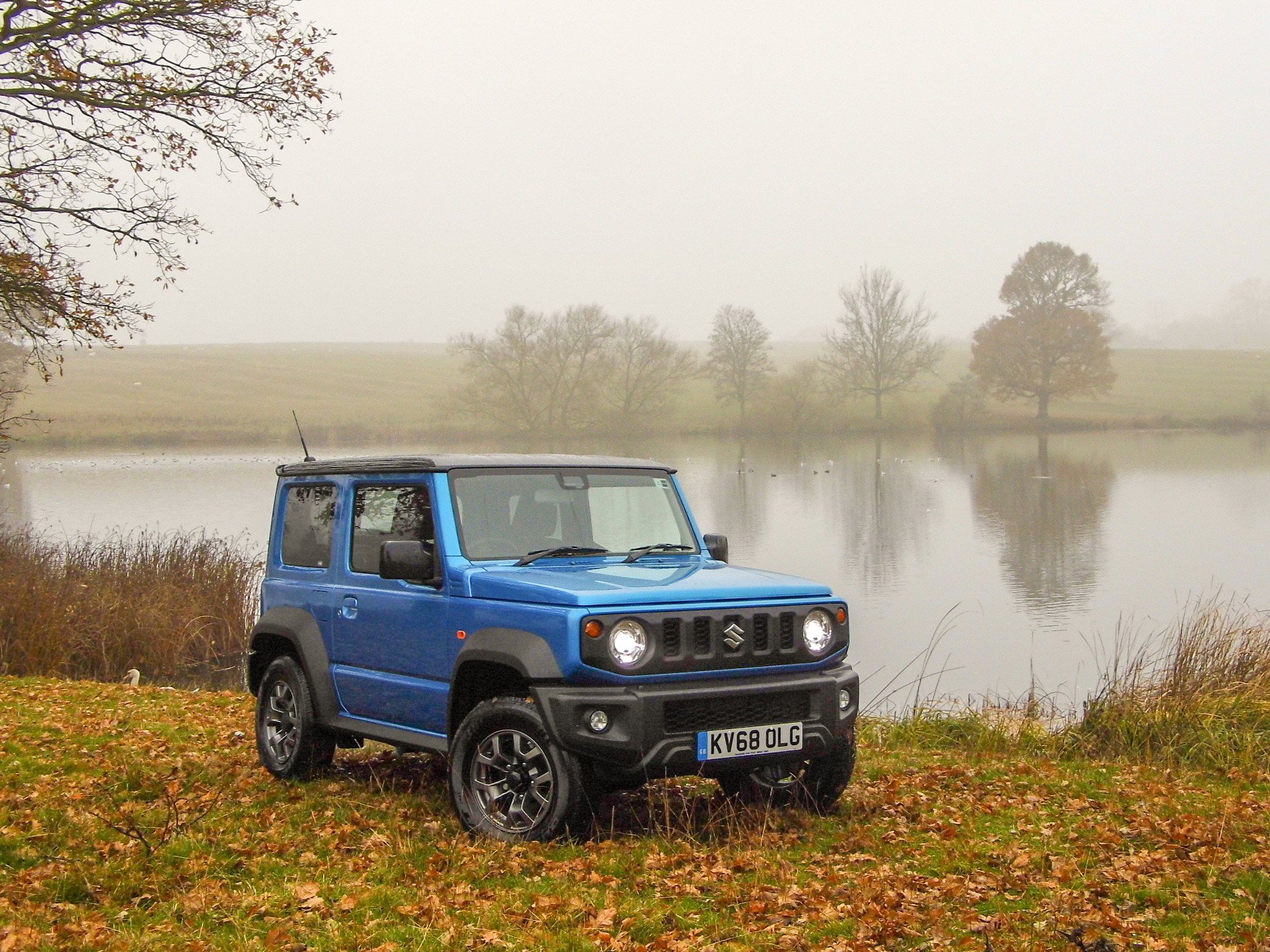 Rather unusually for latter day, newly-designed engines, the 1.5-litre four-pot petrol engine isn’t turbocharged. Fortunately, thanks to the Jimny’s small size and relatively low weight it doesn’t really need a turbo. However, like its predecessor, economy still isn’t its strongest attribute, particularly as it’s four-wheel-drive only. The Jimny was awarded just three stars when it was crash-tested by Euro NCAP in September 2018, which isn't particularly encouraging. However, the car's poor rating is mostly to do with how its construction fails to offer a high level of protection to adult occupants in accidents.

The car comes with safety systems including Dual Sensor Brake Support (DSBS), which operates if the system determines there’s a risk of collision with a vehicle in front or a pedestrian. You also get lane-departure warning, high-beam assistance, traffic-sign recognition, hill-descent control, hill-hold control and six airbags.

The new Jimny’s on-road driving dynamics have improved markedly over the previous model. However the steering is unnervingly light, is late to react and has too much play at the dead-ahead. In an urban environment the ride is best described as adequate and the car feels agitated on imperfect road surfaces. When you do eventually get up some speed (62mph arrives in a lethargic 12.3 seconds), the ride doesn’t get much better.

Due to the Jimny’s tall, narrow body, short wheelbase and ladder frame construction, the ride is ‘buoyant’ through dips and over crests. Fortunately, there is much less body lean than before. The front tyres are not quite wide enough to instil confidence to take sweeping corners with any degree of sure-footedness as the front end has a noticeable tendency to float laterally on its sidewalls. The new Jimny is one of the few authentic off-roaders equipped with a rigid axle for both front and rear. Drive can be switched from two-wheel drive and four-wheel drive at speeds of up to 62mph and from 4-high to 4-low at a complete stop.

The ladder frame structure from the previous iteration is retained and provides a solid base for suspension components when driving off-road and also helps protect the vehicle body even on bumpy surfaces. For the new Jimny, a new cross member plus two additional cross members have been incorporated for increased torsional rigidity. The approach angle of 37 degrees, ramp break over angle of 28 degrees and departure angle of 49 degrees enables the Jimny to climb over obstacles and steep hills without the risk of scraping its bumpers or underbody. The 2019 Jimny features a part-time rear-biased 4WD system with low range transfer gear, which can be easily switched from 2H (2WD-high gear), 4H (4WD-high gear) and 4L (4WD-low gear) modes by a manually operated shift lever directly connected to the transfer gear. Compared to the 4H mode, the 4L mode can transfer more torque to the wheels when in lower gears offering better traction on steep slopes and rough terrain. We trundled the new Jimny through the tough and rugged off-road course at Stoneleigh Park. As expected, it performed exceptionally well and its low-ratio ‘box is a gem to use with confidence. Its off-road capability is unquestionable as the dozens of YouTube videos of past Jimny’s in action around the world, will attest. With 45 years of Suzuki heritage and engineering, it's easy to see why the Jimny has become one of the most loveable compact 4x4's on the road today. Being five years in development, the brilliant new Jimny will undoubtedly continue to enjoy a cult following largely due to its genuine off-road capability and all round rugged cuteness.

The 2019 Jimny’s negatives – and there remain a few – are tangible. But if you’re looking for an affordable way into the off-road lifestyle with a genuine off-roader that defies luxo-barge modernity and over-styled vulgarity and can accept its minor shortcomings, then the all-new Jimny is for you. There has been much speculation that the Suzuki Jimny is to meet an...

A blend of styling, luxury and a healthy dollop of off-road prowess in...

A modern classic you can drive today, the Toyota GT86 is easy to love.