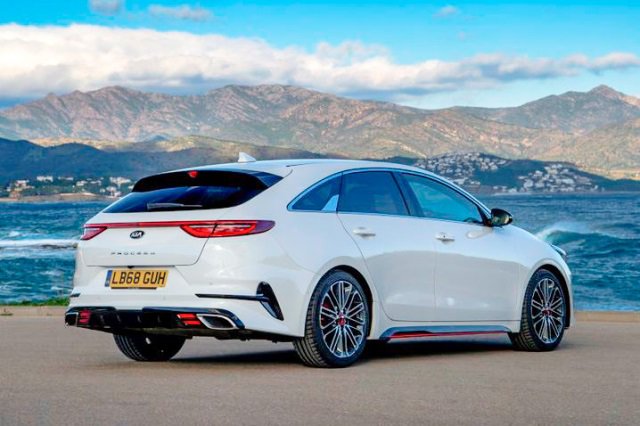 …and for my next trick, ladies and gentlemen, I will morph a contemporary three-door hatchback into a svelte five-door shooting brake…right before your very eyes! And I won’t even change the name. Much.

The 2019 KIA ProCeed used to be called the pro_cee'd, but that was when it was a three-door variant of the reasonably-priced five-door cee’d hatchback…and yes, both of those spellings are correct. 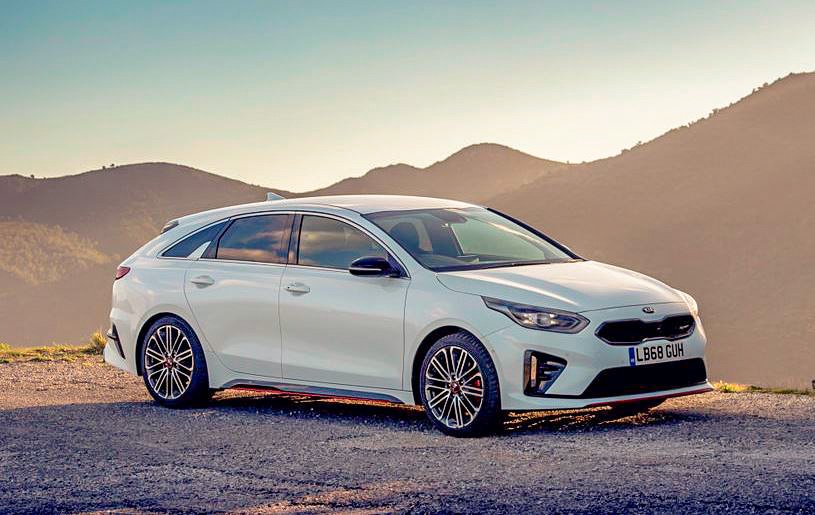 However, last year KIA introduced the all-new Ceed five-door hatch (now with a capital C and divested of its pretentious apostrophe) to a deservedly glowing reception.

And, so it is with the new KIA ProCeed. It may now be more sensibly spelt – for which my keyboard is eternally grateful – but just where does its new shooting brake body style fit in the current KIA UK product line-up – above or below the handsome Ceed Sportswagon estate also introduced last year? Being ‘low, lean and lithe’, KIA UK refers to the ProCeed as their ‘halo’ Ceed model, so I guess that, officially, at least, it sits atop the Ceed hatch and estate. 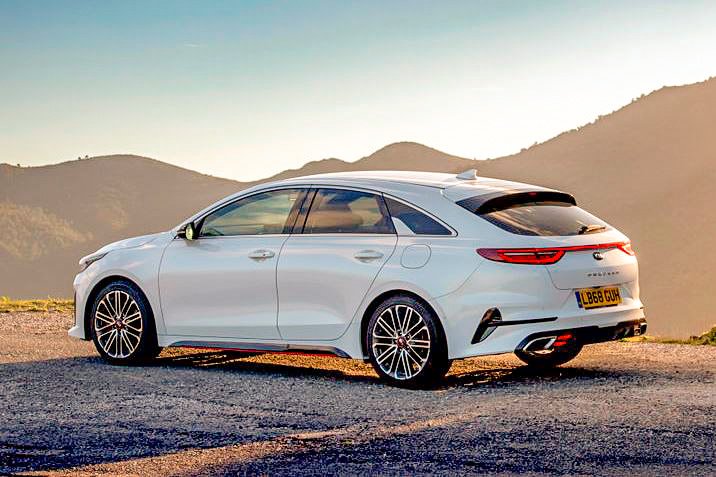 Last month, I went to Peralada near Figueres in northeast Spain to drive the new (RHD, Brit-plated) KIA ProCeed and filed this first-drive impression…

The 2019 KIA ProCeed GT is an answer to those who like good-looking cars, but find that a three-door hatchback just doesn’t fit their lifestyle. Design-wise, it’s a visually pleasing mix of coupé and estate, but with practicality erring more on the latter, which is no bad thing for families.

The ProCeed’s bodywork shares nothing but its front wings and bonnet with other Ceed variants. Everything else is new. Borrowing styling cues from a number of cars such as the Mercedes-Benz CLA and (the rear of the) Porsche Panamera, the end result is both sporty and classy. 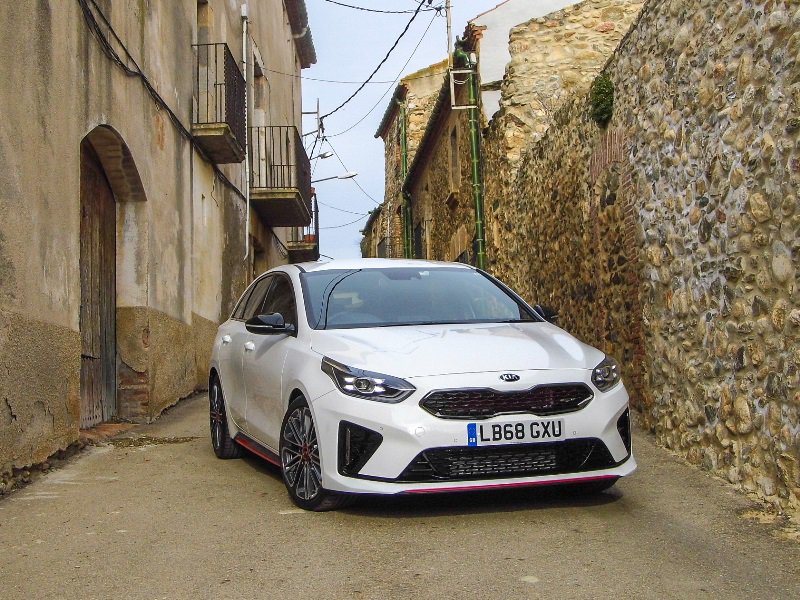 Underpinning the car is KIA’s now familiar K2 platform deployed under all Ceed models, but the dimensions have been adjusted. It’s 5mm longer than the Ceed Sportswagon estate and has a longer rear overhang, but ground clearance is reduced by 5mm and the roof line is a significant 43mm lower. The wheelbase and width are unchanged. 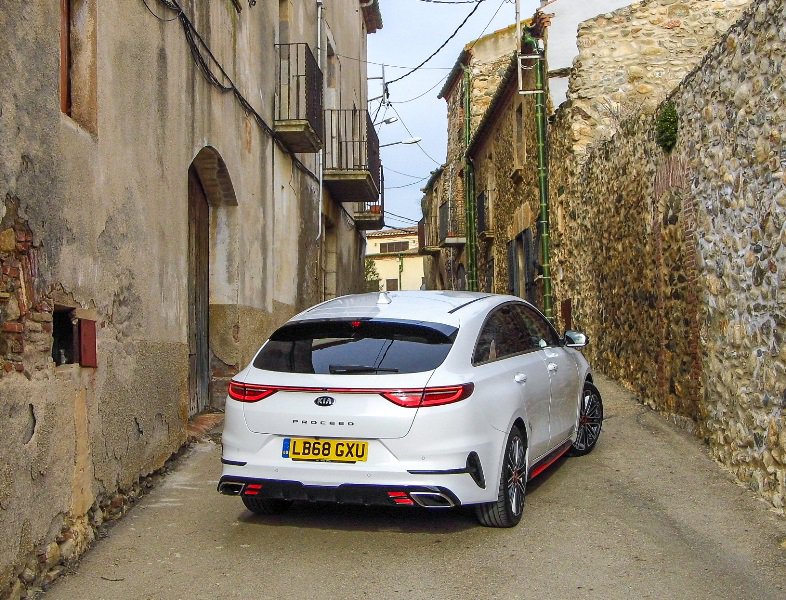 It has few rivals in the family car sector and only Mercedes-Benz, with the A-Class based CLA Shooting Brake springs to mind – a premium competitor don’t forget – but more on that shortly.

Inside, the ProCeed is much like the Ceed upon which it’s based and that’s no bad thing, as the new Ceed has an upmarket appearance, quality finishes and soft-touch plastics similar to those found on more expensive German premium cars. 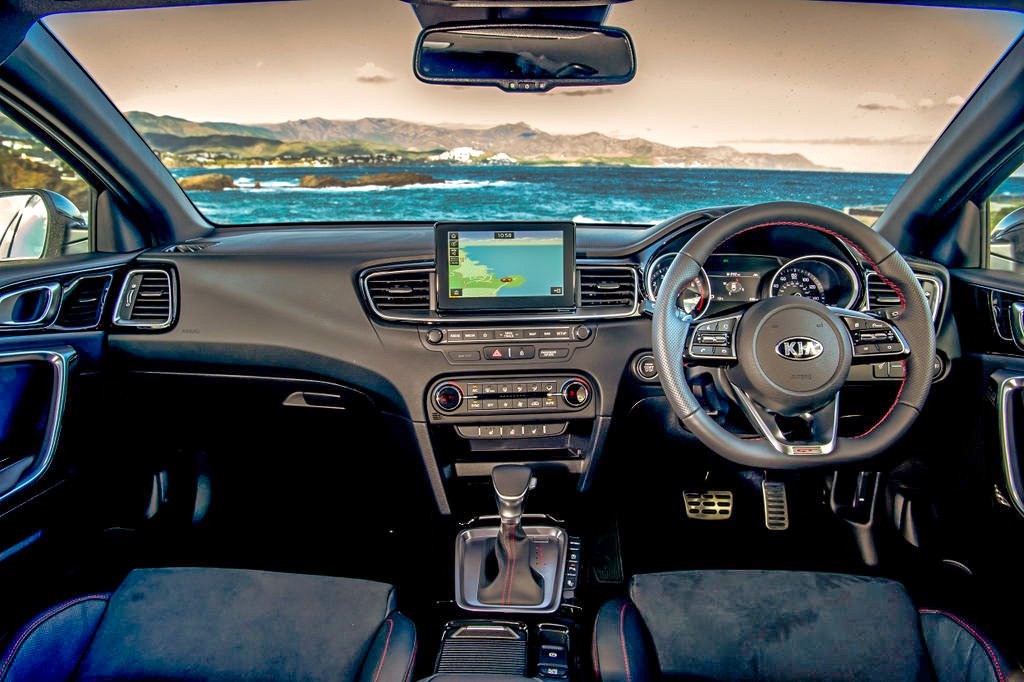 Not as value-led as it once was, KIA is a more mainstream brand than Mercedes, but believes it can learn from the CLA. Those Merc buyers typically spend more on a Shooting Brake than they do on other CLA/A-Class derivatives. On that understanding (and it’s hard to disagree), KIA decided to introduce three higher specifications on the 2019 ProCeed: The range-entry GT-Line, a mid-spec GT-Line S and a performance-focused GT. 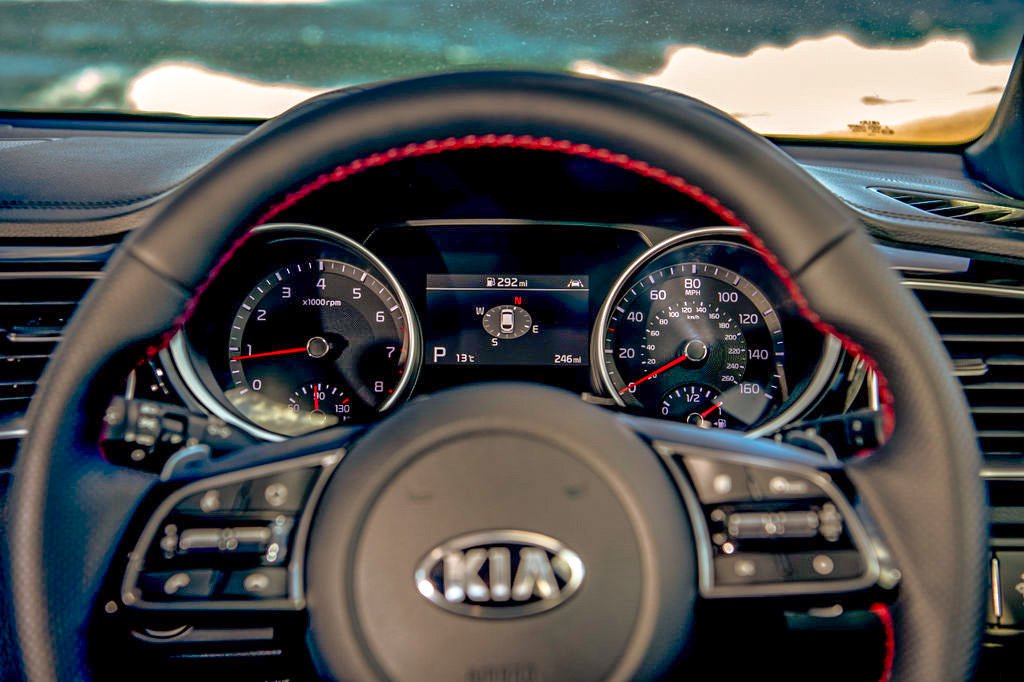 As all ProCeed models are high-spec, they all get faux suede sports seats and a grippy leather steering wheel, and black gloss interior finishing. It all feels very posh and befitting of its stylish status. The grey roof lining in the Ceed hatch and Sportswagon estate, for instance, is black in the ProCeed to make the cabin more enveloping. 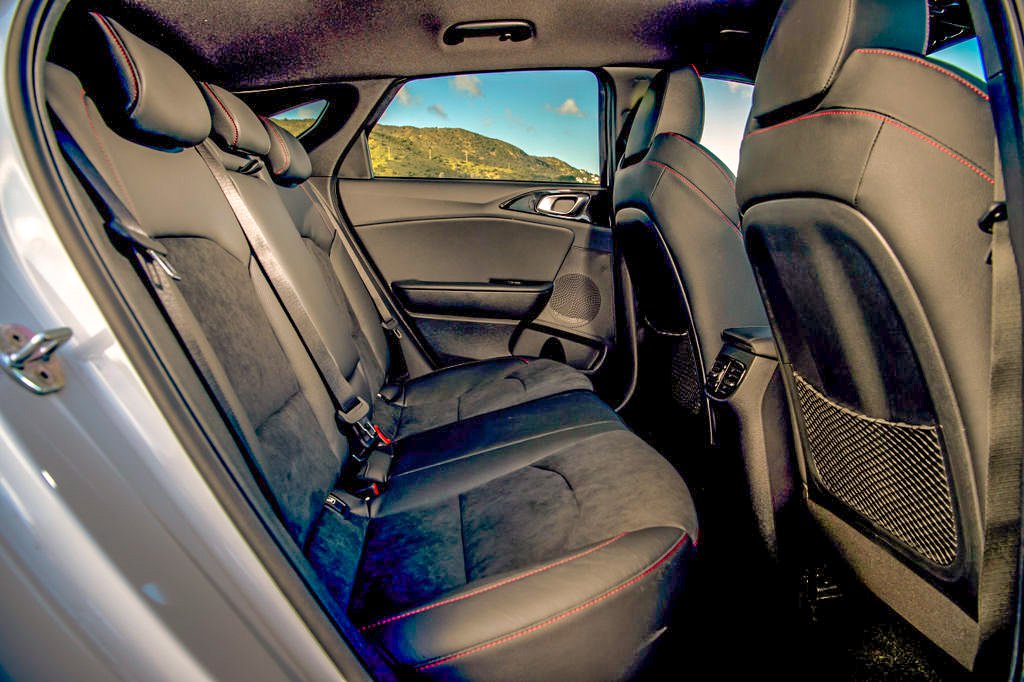 Here is where the blurred lines appear between the Ceed Sportswagon Estate and the ProCeed Sport Brake. To be honest, there is little difference in boot volume and at the end of the day it will be a straight choice between the two body styles. 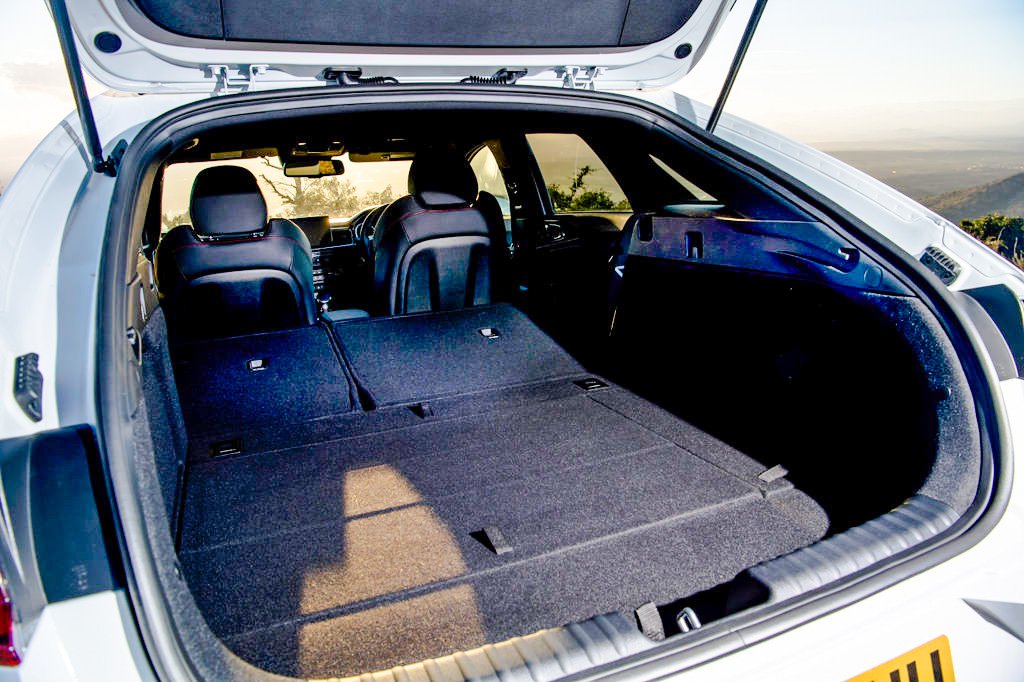 By lowering the hip line of the rear seats, KIA claims headroom is unimpeded by the lower roofline. In reality, my five-foot ten frame certainly had no issue in either row of seats, but those more vertically-blessed may encounter the roof lining a little sooner than they would like. Leg room, too, is decent throughout.

Compared with the Ceed hatchback, you get a whopping 50 per cent more boot space. Its 594 litres is a healthy figure when you consider what you get in some estates. In fact, it’s only 31 litres less than the Sportswagon estate. 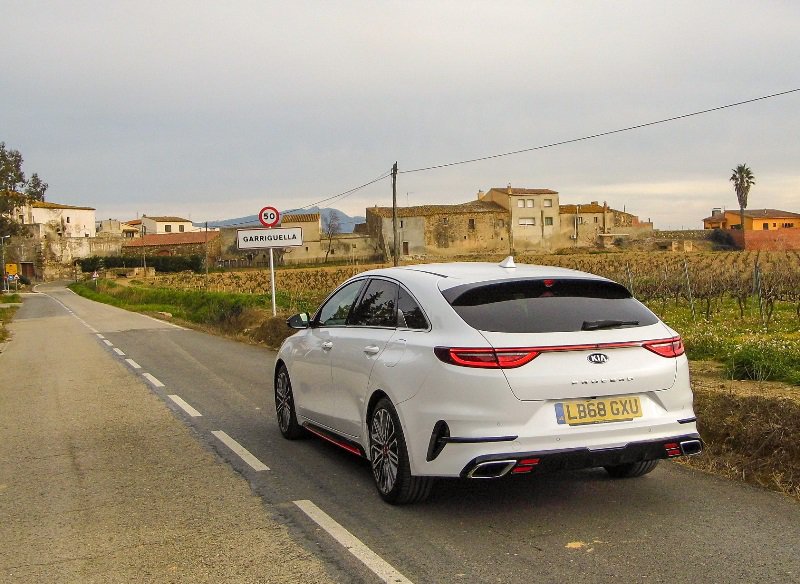 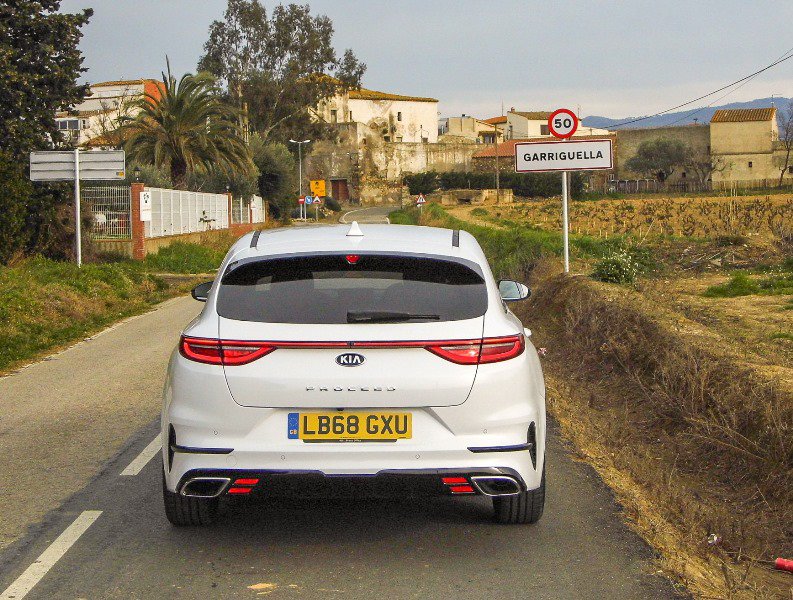 However if you do need more space in the boot, the back seat uprights collapse via handles in the luggage area, so you don’t have to go to the rear doors to fold them down. Doing so reveals a generous 1,545 litres of load space. At GT-Line level, the rear seats can be folded 40:20:40, while the other two models are limited to 60:40. But all get an under-floor storage area and hooks to lock things down.

It would be remiss of me not to mention that rear visibility is somewhat restricted, though. The view out of the rear mirror permits little more than a downward, letterbox view of what's going on behind – up to about a hundred feet. For some, that might be a safety compromise too far. 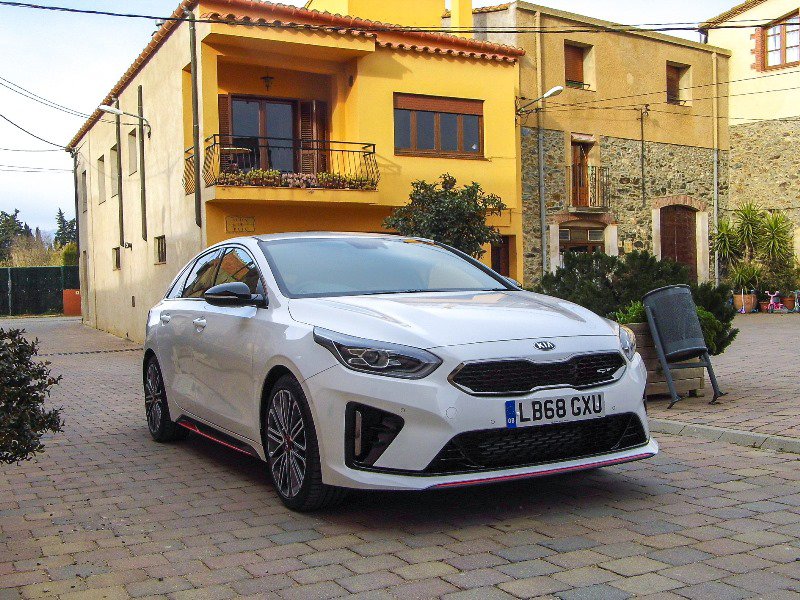 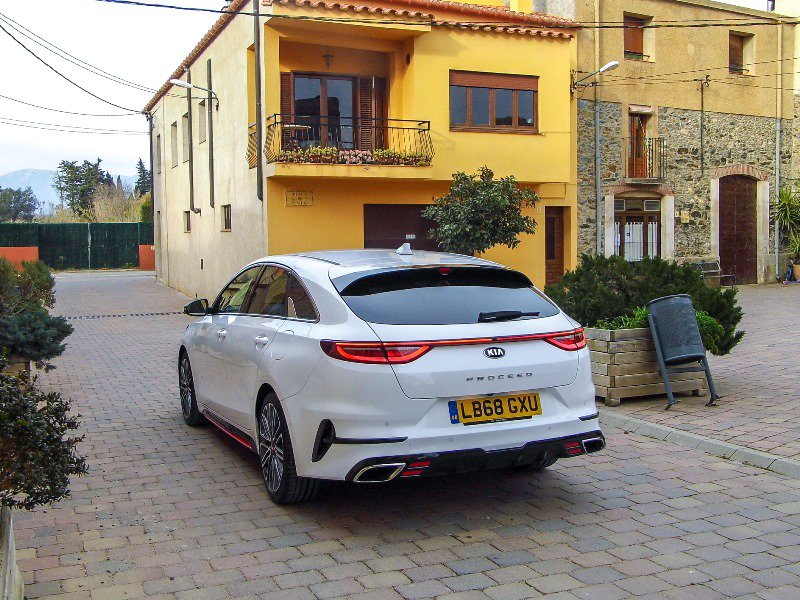 At launch, there are three engines in the 2019 ProCeed line-up. For the more sensible, there’s a turbocharged 138bhp 1.4-litre T-GDi petrol or a 134bhp 1.6-litre CRDi turbo-diesel. Both engines are available with a six-speed manual gearbox or seven-speed dual-clutch automatic – opt for the GT-Line S version, though, and you’re only choice will be the 1.4 T-GDi with the automatic. At the top of the range you have a 201bhp 1.6-litre T-GDi turbo-petrol engine that powers the auto-only GT variant. In the range-topping version the power delivery is strong with a broad spread of practical torque with an unexpected kick from low revs. That gives very flexible performance that’ll help see off an overtake manoeuvre with ease.

A prod of the ‘sport’ button sharpens the accelerator pedal’s response further and also livens up the audio notes. The engine sound is partly electronically enhanced but sounds pleasantly guttural, nonetheless. Gearshifts are quick and smooth, but when you’re driving quickly and asking a lot of it then the ‘box can feel a tad behind the beat. 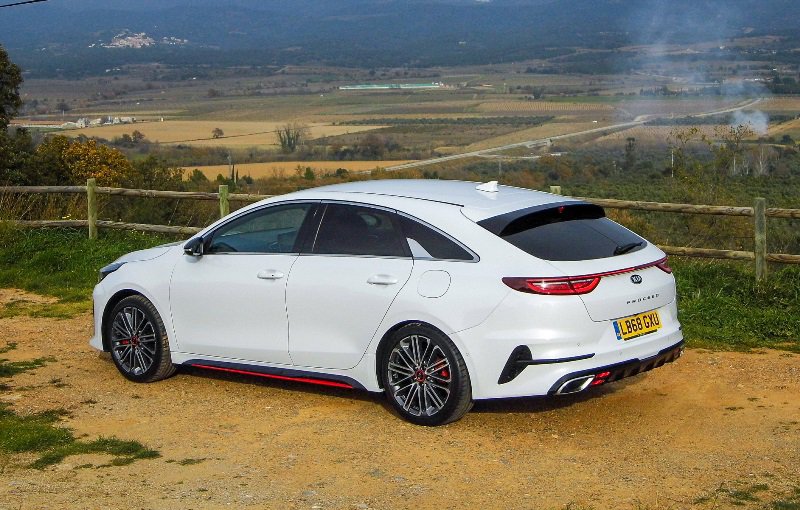 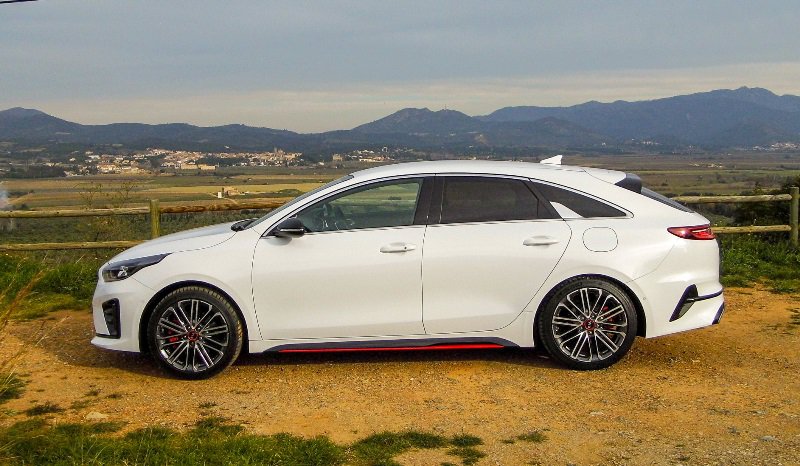 I also drove the 1.4 T-GDi which is reasonably flexible, but while it’ll get up to motorway speeds and cruise along without huge effort it does feel strained if you give the accelerator an enthusiastic prod and ask for a quick burst of pace. But it’s only at those higher speeds where it disappoints slightly, but around town it’s perfectly adequate and very well refined.

Emissions and fuel efficiency, meanwhile, are competitive, with the diesel predictably the best of the three, while the higher-powered petrol GT is on the thirsty side.

Once the ProCeed is underway, it’s the unexpected level of plush refinement that grabs your early attention. It is a very classy and quiet cruiser with little wind noise and quite acceptable levels of road noise. 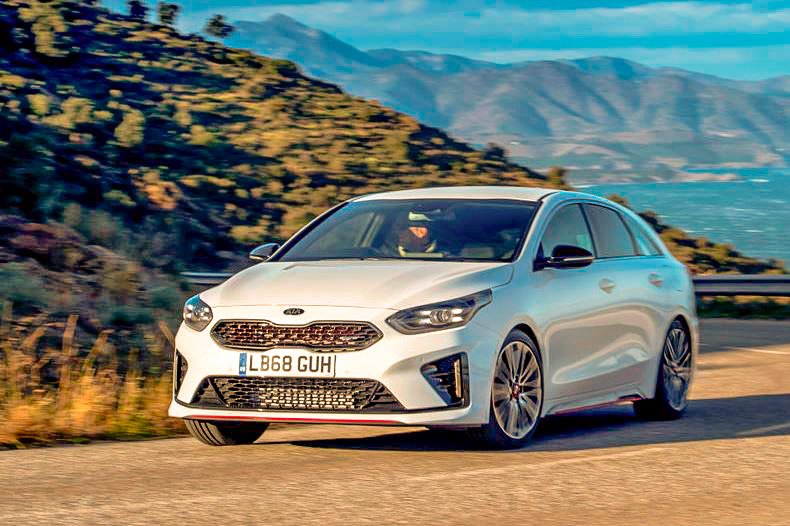 Directly from Barcelona airport, the Proceed proved to be an adept motorway cruiser and, even on more rural crusty roads nearer Figueres, the car handled itself with particular aplomb.

Quick steering, a range of engines that gives its best at mid-range revs and expensively-engineered suspension (it has a high-end multi-link setup front and rear, like a premium car) enables the KIA ProCeed to punch above its price bracket. The comfort-biased ride of both the GT-Line and GT-Line S did tend to introduce more body roll through the twisty rural Spanish roads around Peralada if you chuck it around – and you’ll want to!

Then there’s the top-end GT model which has a firmer suspension setup. It exhibits less body roll but some may find the ride a little too firm for its family-oriented target market. The European New car Assessment Programme (Euro NCAP) has yet to crash-test any of the new KIA Ceed range. The ProCeed offers a suite of driver aids as standard and these include autonomous emergency braking as part of the Forward Collision-Avoidance Assist (FCA) system. Lane-keeping, driver attention and high-beam aids are also included. The KIA ProCeed is a most welcome addition to the family car arena. Shooting brake-style coupé-estates have been kept largely within the premium sector for too many years. Introducing one into the Big Brand’s Playground that looks as good as this is a particularly bold move by KIA.

It’s just as practical as the Sportswagon estate, drives very well and offers a classy and upmarket experience. Parking one on your driveway (and you should), tells the neighbours you haven’t succumbed to an SUV or even worse – a crossover – just yet.

The new KIA ProCeed is available to order and first UK deliveries are now underway.