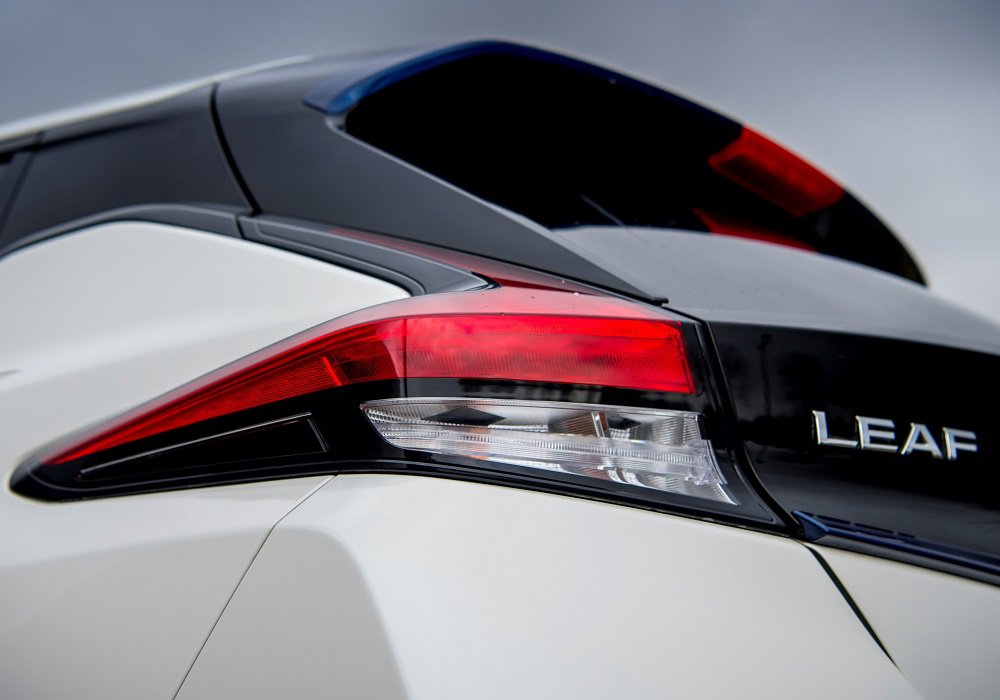 The original Nissan Leaf was launched in 2010 and quickly became the world’s best-selling electric car, with global sales in excess of 320,000 units. More than 100,000 of those found homes in the EU (UK 28,000) and collectively, EU/UK Leaf owners have now driven nearly two billion miles and saved over 300,000 tonnes of CO2. These are numbers more than worthy of mention.

Nissan revealed this second-generation version of the ground breaking all-electric Nissan Leaf hatchback in Japan back in October. It’s a hugely important model for Nissan and reaffirms the Japanese automaker’s position as a battery-only electric vehicle pioneer.

The Leaf finds itself with only a few direct rivals. The smaller Renault Zoe might appear on some shortlists, but in terms of matching the Leaf for family-friendly size, there’s only really the Hyundai Ioniq and the Volkswagen e-Golf in the competitive mix. The BMW i3 is a further premium option, but it’s much more expensive and isn't remotely as spacious. 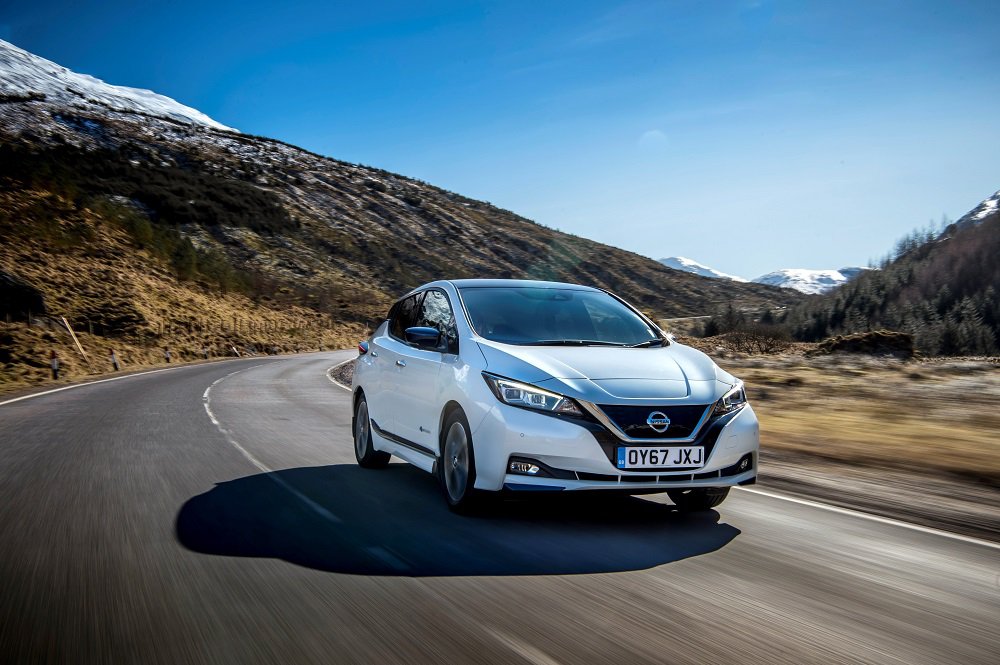 The 2018 Leaf looks more substantial, more conventional and less ‘blobby-Bobby’ than its predecessor. The exterior has been redesigned with a flat underfloor, sharper nose led by Nissan’s now familiar V-motion grille. There’s a floating roof effect at the C-pillar and boomerang rear lights with touches of ‘eco’ blue in the grille and bumper detailing.

The aerodynamic overhaul helps keep the Leaf’s EV range up at cruising speeds, as drag has been reduced by four per cent compared with its predecessor and the centre of gravity is lower, too.

If you want to make your Leaf stand out from the crowd, there are white, yellow, red and blue exterior colours that can be paired with two-tone roof options and a new Spring Light Green colour exclusive to the Leaf. Inside, the second-generation Leaf offers greater appeal than before and shares many features with the new Micra introduced last year. Material quality has undergone the required step up, as has the new dashboard. The controls feel altogether more traditional, although some of the switchgear and buttons seem ergonomically ill-placed.

Finding a comfortable driving position was an unexpected challenge and if I’m honest, I’m not sure I fully acquired one. Because you’re perched atop some of the underfloor batteries, the front seats are set rather high – which is good for forward visibility, but not ideal when the steering wheel adjusts only for rake, not reach. 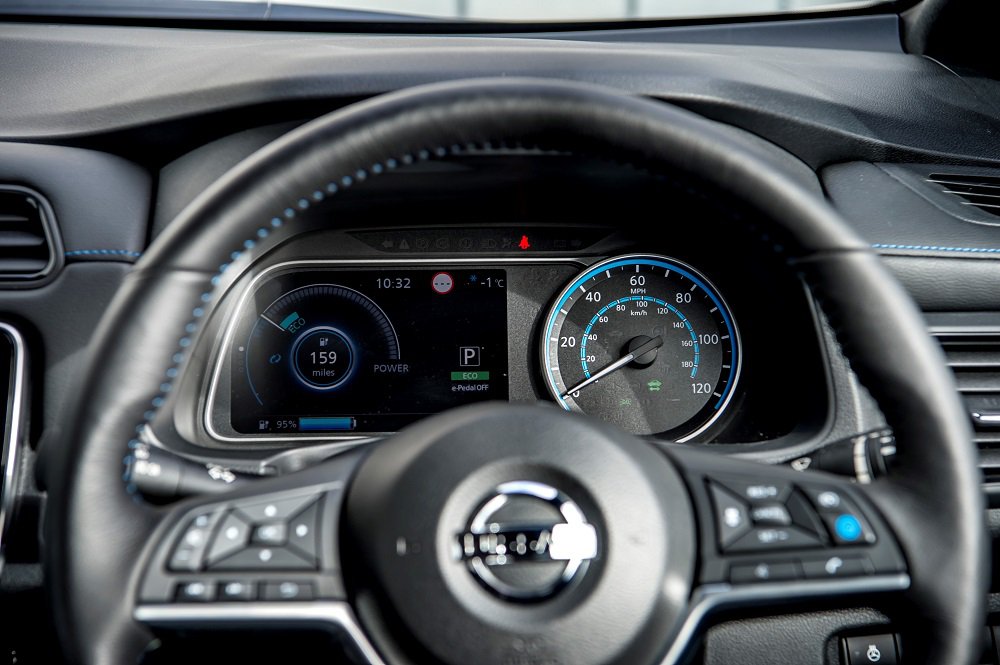 This time around, there’s a much better instrument cluster from the base model up. The digital screen has a display you can customise, which makes getting the best out of the electric powertrain that much easier and more interesting.

At an impressive 435 litres, the boot is bigger and deeper than any rival – including those part-electric plug-in hybrids you might also be considering, although there is a serious step behind the rear seats when folded down, which may impinge on practicality. 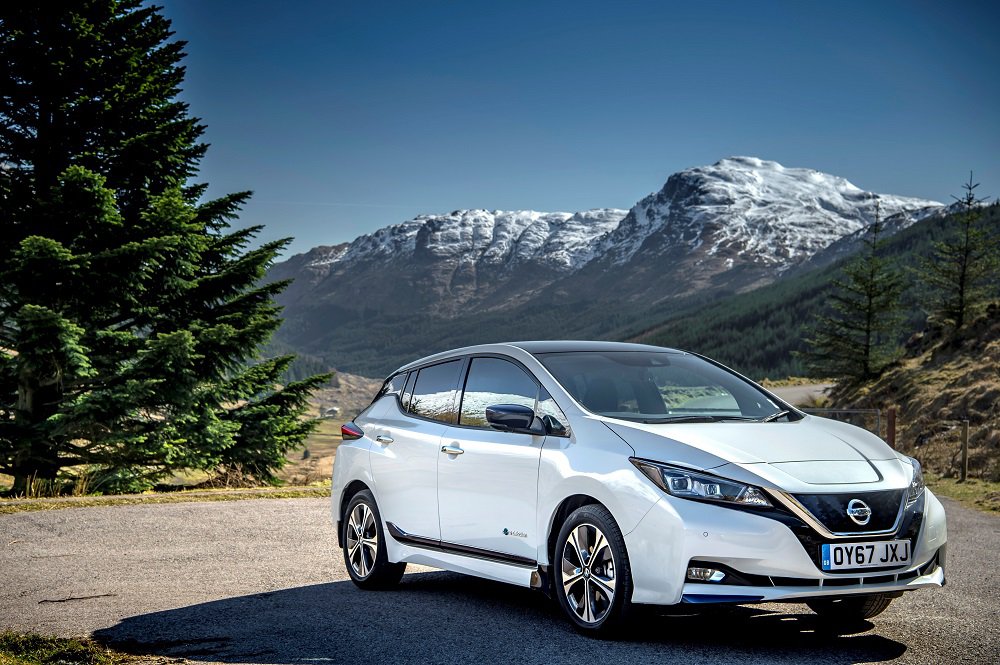 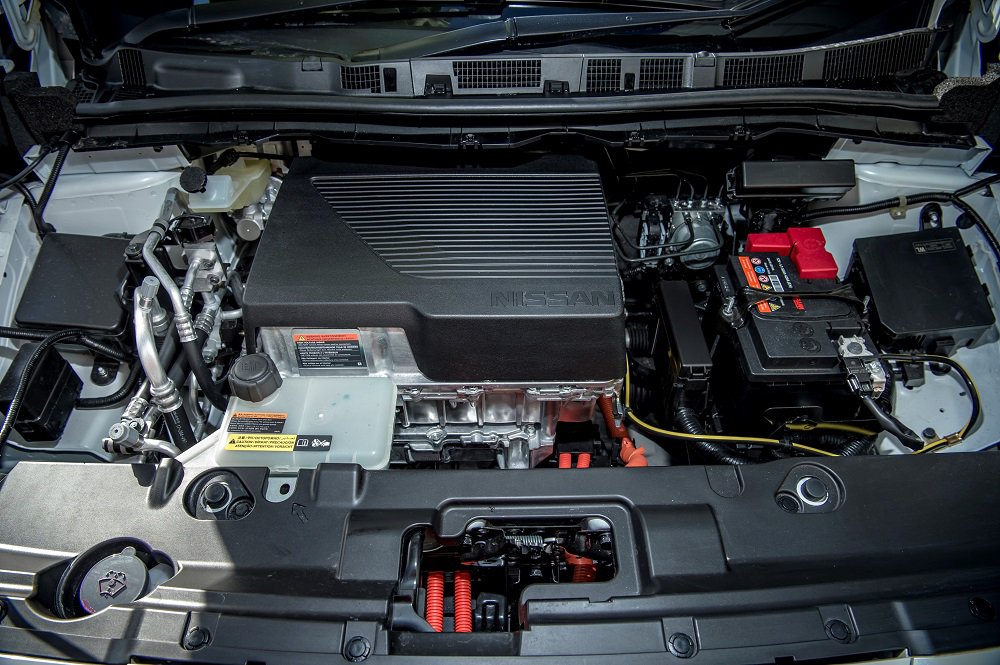 If rather unkindly, many still associate electric cars with milk float performance (my neighbour, for instance), but that really couldn’t be further from the truth – particularly with the Leaf. It’s much nippier than a Renault Zoe and will out sprint a Volkswagen e-Golf from a standing start to 62mph. Stomp on the two-stage accelerator pedal when pulling out of junctions and the front end fights for grip as it attempts to deal with the delivered power.

The previous model Leaf had a 30kWh battery system and offered a paltry 110-mile range. The new Leaf now has a larger capacity 40kWh battery which offers an official, lab-tested range of 235 miles. The new electric motor fitted to the Leaf is not only more powerful than in the previous model but also more energy efficient and while that claimed range of 235 miles might sound impressive, a safer ‘real-world’ figure of 160-170 miles is easily attainable. (The test car arrived from Nissan UK on a flatbed transporter, 100 per cent charged and indicated an available range of 168 miles.)

The Mk2 Leaf is also faster to charge – but only when using a home wall box or public rapid-charger. With a standard domestic three-pin plug it now takes up to 21 hours due to the increased battery capacity. I charged the Leaf from 14 per cent capacity to 78 per cent within 13 hours, overnight from a standard domestic plug. 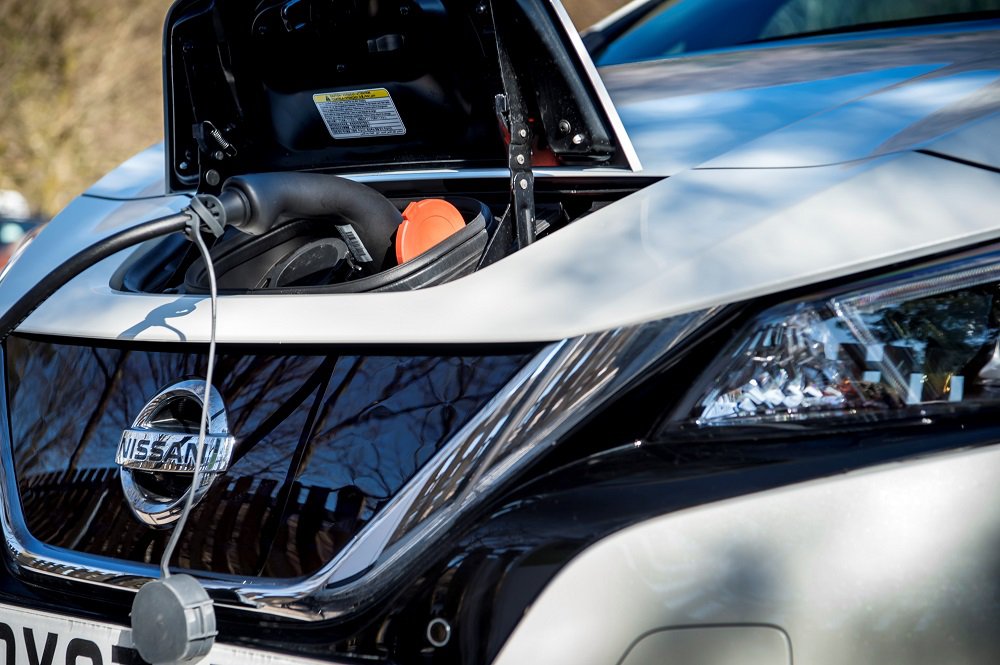 There are three key new features for this generation of Nissan Leaf: e-Pedal, ProPilot Assist and ProPilot Park.

Nissan’s e-Pedal allows the ‘one-pedal’ driving style enjoyed by EV fans, but takes it to a new high. Lifting off the e-Pedal accelerator brings the Leaf to a complete stop with no need to apply the brake pedal. From higher speeds, the e-Pedal can decelerate the Leaf with up to 0.2g of robust force, which may initially cause all aboard to bob their heads like the Bohemian Rhapsody scene from Wayne’s World. The system also holds the Leaf steady on hills once you’ve stopped. 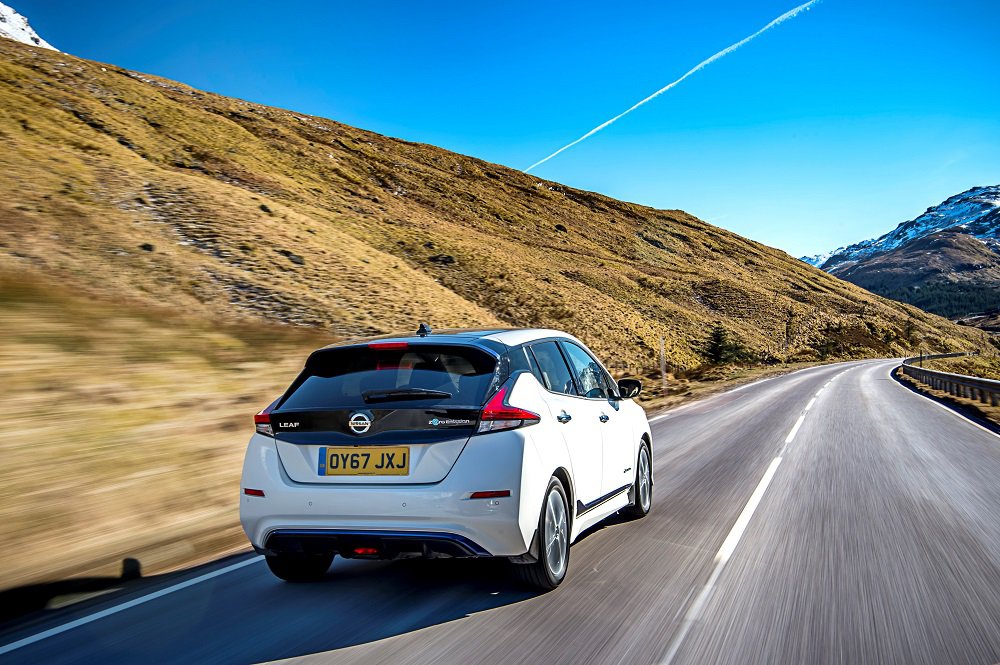 But where some regenerative systems feel like they’re always dragging on the car like an anchor, the Leaf’s pedal is wonderfully linear and sensitive – in either direction: The slightest foot pressure propels the car forward. Feather the pedal and the Nissan coasts naturally, even as the 7-inch TFT display shows that the car is beginning to capture and store energy. Lift more and deceleration increases but along a very progressive curve as you ease off the throttle. Even in crushing rush hour traffic, I could tailor one-pedal slow-downs and stops from any speed and almost never had to touch the brakes. The only miscue was the occasional low-speed jerkiness during parking when I was feathering the throttle. 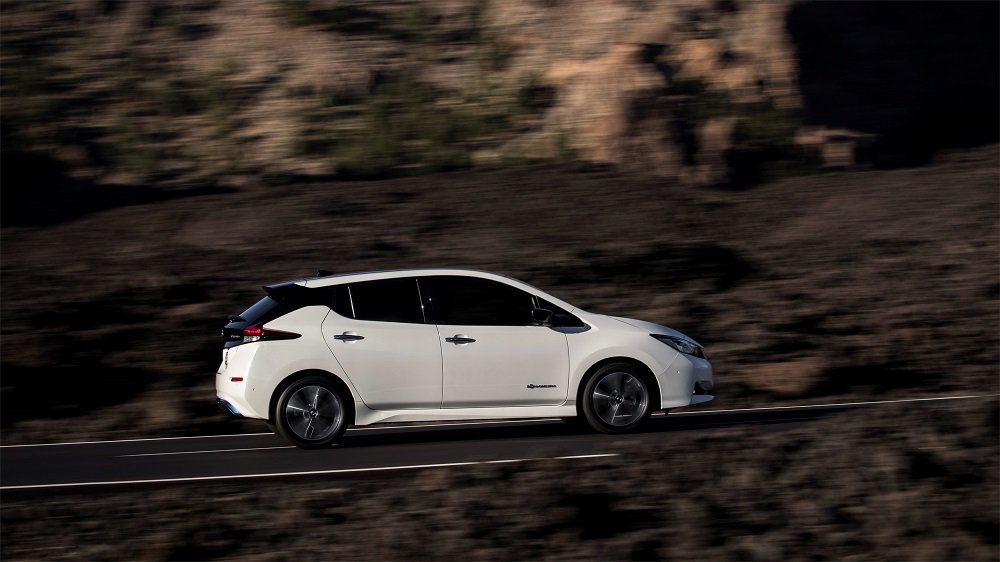 A round trip of 72 miles to Reading using only A and B-roads, regenerated an additional 22 miles of range, which I was rightly impressed with. Motorways are best avoided as they offer fewer regenerative braking opportunities and – as you’re mostly draining the battery and not replacing any charge – the available range plunges noticeably when cruising at 70mph.

ProPilot Assist is a combined adaptive cruise control and lane-keep assist system, enabling what’s increasingly called semi-autonomous driving wherever there are clearly marked lanes – as on the motorway. ProPilot Park is a one-touch autonomous parking system. Press the button and the Leaf will do all the steering, accelerating and braking necessary to get you into the space. 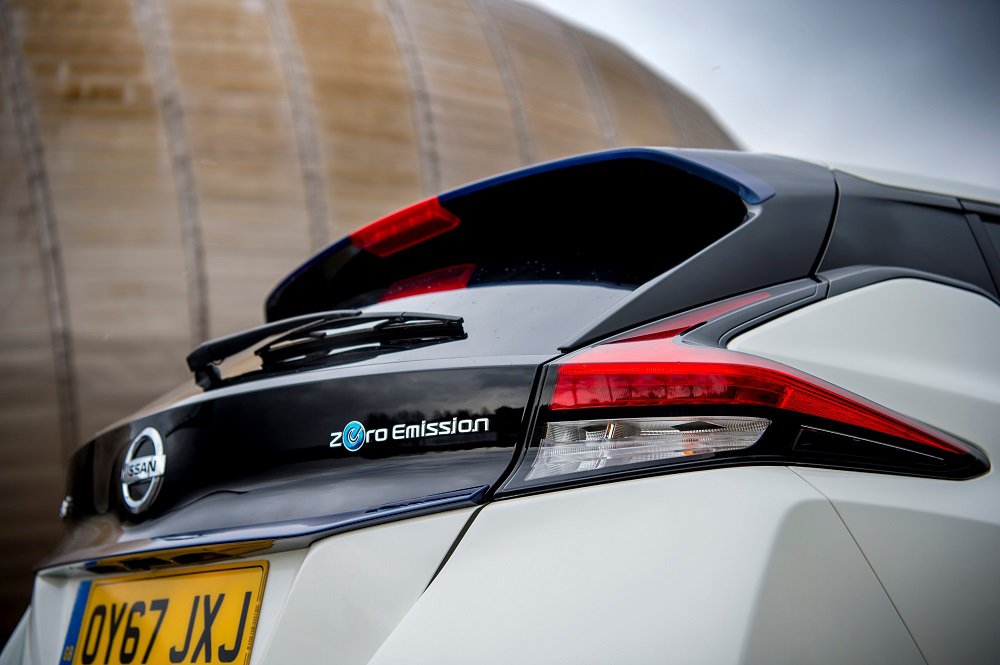 Nissan has made this second-generation Leaf more fun to drive than the original. Handling is safe and predictable and at no time during the test week did the car step away from a chosen line.

Nissan has also made an effort to refine the driving experience for Europe’s more dynamic driving tastes. This includes changes to the suspension springs and shock absorbers, mildly stiffer anti-roll bars and quicker steering.

The steering has also been given heavier feel – not to the point where it gets tiring to drive, rather just enough to give you some sense of feedback and grip levels. Being electric, it’s an artificial sensation but convincing enough to instil confidence when driving the car faster. This Leaf’s centre of gravity is also 5mm lower than before, further improving its ability to change direction and add stability in the bends.

The result is an electric car that doesn’t roll around too much when cornering enthusiastically, but still remains suitably comfortable for everyday family motoring. 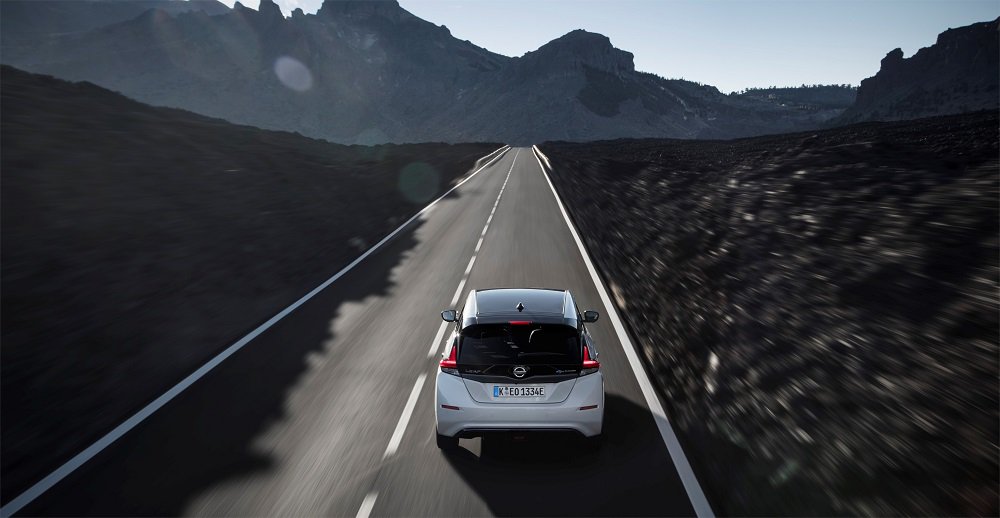 Only this week, Nissan Europe announced that one Leaf is sold every 10 minutes in the EU. There are many reasons why this is so, but the all-new Nissan Leaf just added a whole host of new ones.

If your work-life balance suggests you’re ready for an all-electric car lease, choosing the new Leaf will be one of the better decisions you’re likely to make. It’s now sharper looking, better-priced than its opponents, better-supported by relevant public fast-charging infrastructure, more practical as a family conveyance and most importantly – it now has the battery range to be an integral part of everyday life more than ever before.