We Brits are a funny lot. Optimistic, too, it seems. Despite our unexpectedly scorching summer, our weather at any time of year is usually fickle at best. Still, we are one of the biggest markets in the world for convertible cars and one of the UK’s best-selling ragtops currently available is MINI’s unique convertible.

Why unique? Well, it has a fully-retractable roof and a pair of rear seats. The competition either have oven-like panoramic sunroofs or, in the case of the Mazda MX-5, two fewer seats. Of course, the MINI convertible isn’t without its flaws, but that doesn't stop it being charming and immensely likeable. 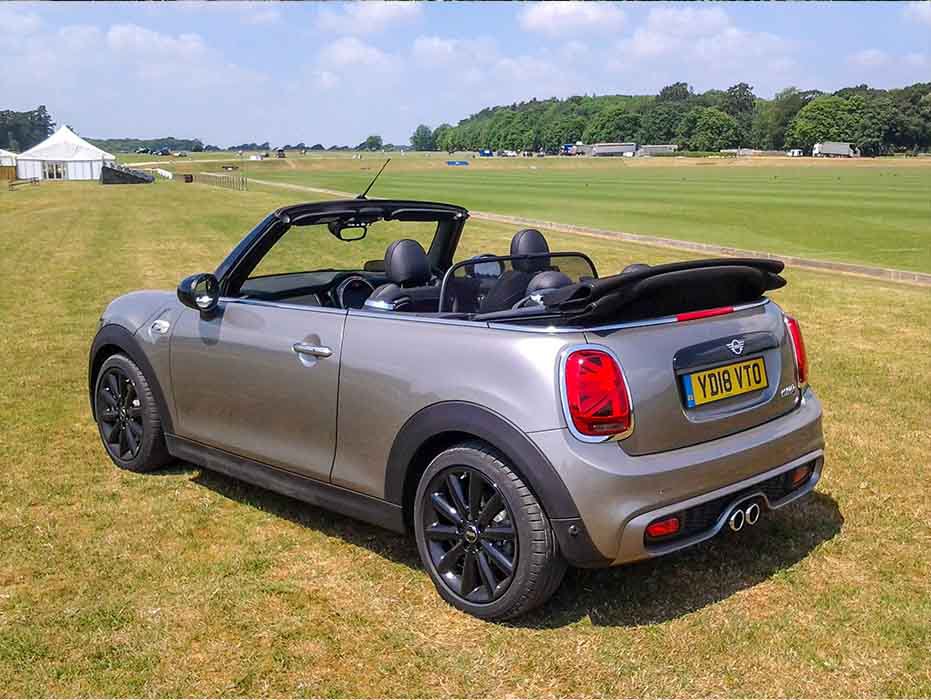 The current, third generation MINI was introduced in 2014, but earlier this year both the hatchback and convertible were treated to a round of updates. At first glance, there’s not too much difference between the current MINI convertible and the pre-facelift model as the 2018 enhancements are subtle, to say the least.

As a frequent winner of the automotive pie-eating contest, it’s no secret that the MINI has been getting bigger through the years and this new convertible is no exception. At 3.8m long, 1.7m wide and 1.4m high, it’s close to superminis like the popular Ford Fiesta and Fiat 500 in size. The folding roof requires the body to be significantly strengthened, so the convertible weighs 1,280kg compared to the two-door hatch’s slimmer 1,160kg.

However, it feels more luxurious than ever, while its increased dimensions mean it’s more spacious inside, too. The electric roof has been improved and the boot is also bigger than before.

Unlike rivals such as Fiat’s 500C and the DS3 Cabrio, which have roll-back roof panels which obscure rearward visibility when lowered, the MINI’s folding roof folds all the way down which means with the windows down the whole cabin is exposed. The boot space takes a hit with the roof down, dropping from 215 litres to 150 litres, however. 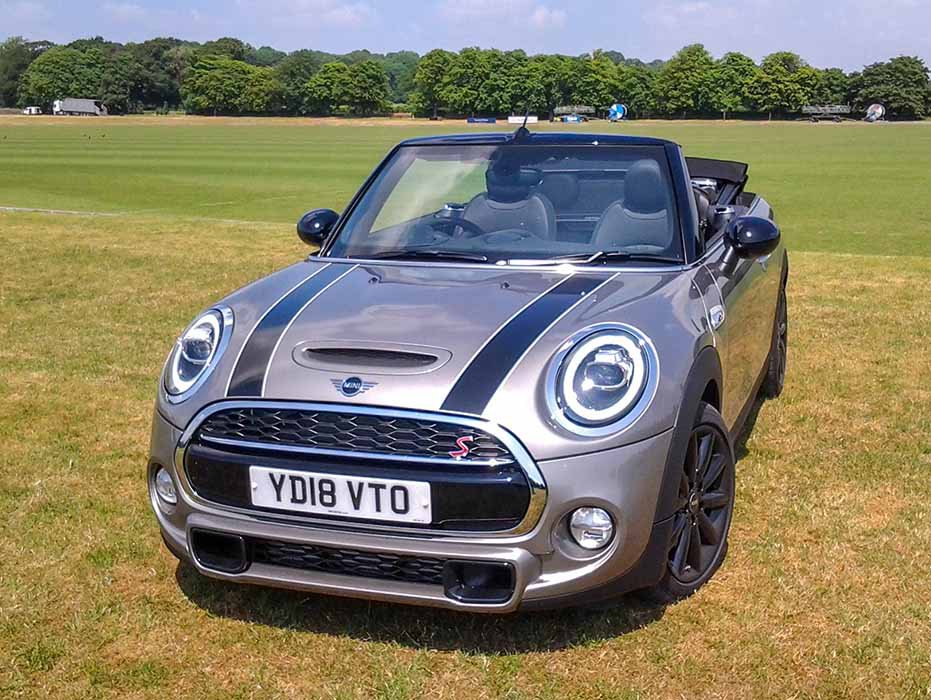 The MINI’s cabin is just as quirky and retro-inspired as the exterior look, with oversized dials, a circular display screen in the centre of the dash and lots of funky design cues. For instance, the driving mode selector switch is part of the gearstick assembly - rather than just being a button on the dash.

The latest MINI convertible is bigger than before and in the front there’s plenty of room for two. However, the rear seating arrangement tells a very different story as you’ll need to have the front seats set quite far forward to shoehorn grown-ups in the back. Even children will be within their rights to complain about legroom if they are behind a taller driver.

Still, it’s easier to get into the back than in the hatch, since you can get the roof off and hop in easily enough. The seats aren’t at all uncomfortable either, so it’s just a case of limited space inside.

The same may be said of the interior storage, as the small glovebox and centre console storage don’t offer much space either. You could always use the back seats as a makeshift storage shelf until you need to use them. 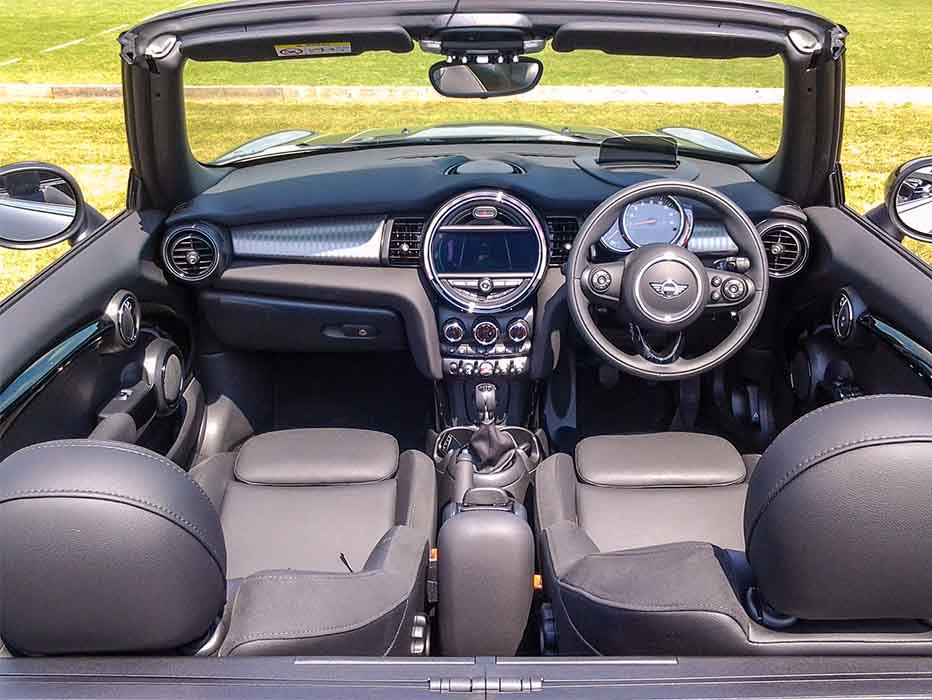 The driving position means forward visibility is good, but with the roof up it’s a bit harder to see out of the back for parking. Clearly it’s a different story with the top down, but that’s not always practical - parking in the rain, for example.

The infotainment and satnav system in the MINI convertible is all part of the large central section in the middle of the dashboard. It’s a prominent feature and has a backlit ring around the outside that matches the colour of the speedometer lighting. Quirky? Sure, but not entirely uncool.

The satnav system itself is based on BMW’s excellent iDrive set-up, using a slightly awkwardly-placed dial controller behind the gear lever. The stereo isn’t fantastic either, which means overall the in-car tech leaves a bit to be desired considering the quality of the rest of the cabin. 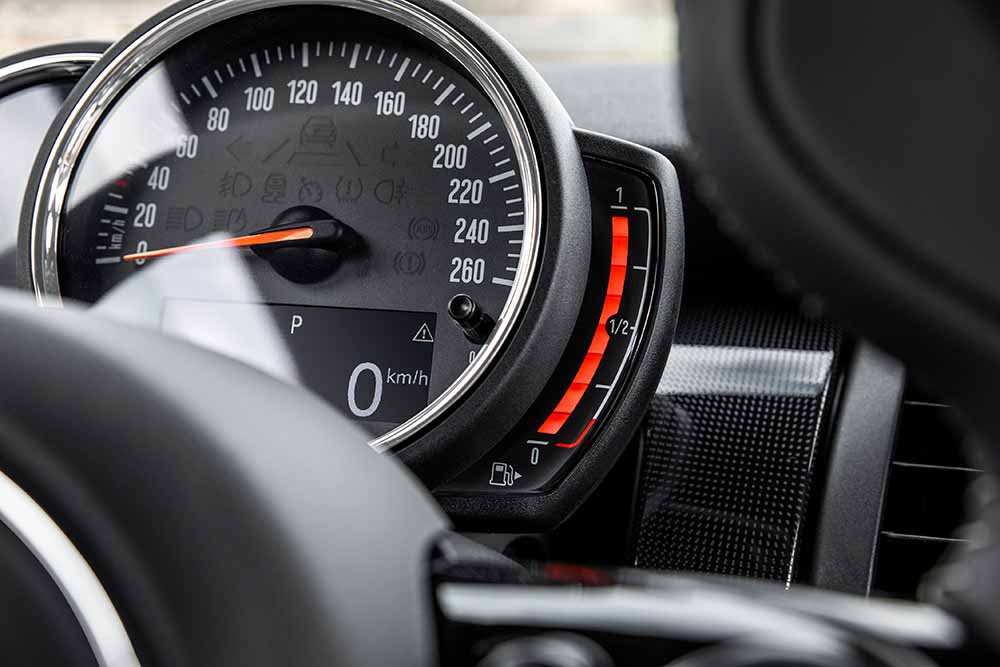 For the MINI convertible there are just two standard trim lines, the Cooper and Cooper S, plus the John Cooper Works performance convertible. There is currently a 25th Anniversary Limited Edition which uses the Cooper S as its starting point and just 300 cars are being made available for the UK market.

While there are a number of cosmetic variances between the Cooper and Cooper S, the significant difference is largely unseen – the engine, but we’ll come to that shortly.

Standard kit was boosted for the 2018 model year, with a multi-function steering wheel and standard 6.5-inch colour touchscreen for the infotainment system. Satnav, connected services and a larger screen are on the options list, too. Interior fit and finish is excellent and the car is comfortable and quiet even with the roof down, particularly if you’re sitting up front. As well as choosing your MINI convertible model, there are a variety of option packs designed to tempt buyers to push the boat out further.

For example the MINI Convertible Pack offers upgraded remote opening and closing from your key fob, plus heated front seats. The Chili Pack counts posher upholstery and LED headlights amongst its highlights, while the Pepper Pack focuses more on comfort. The Convertible Yours Pack includes options such as a multi-function steering wheel, and Union Flag upholstery detailing.

An optional Navigation-Plus Pack is available which adds an 8.8-inch central infotainment screen in place of the standard 6.5-inch unit and adds wireless charging and Apple CarPlay. 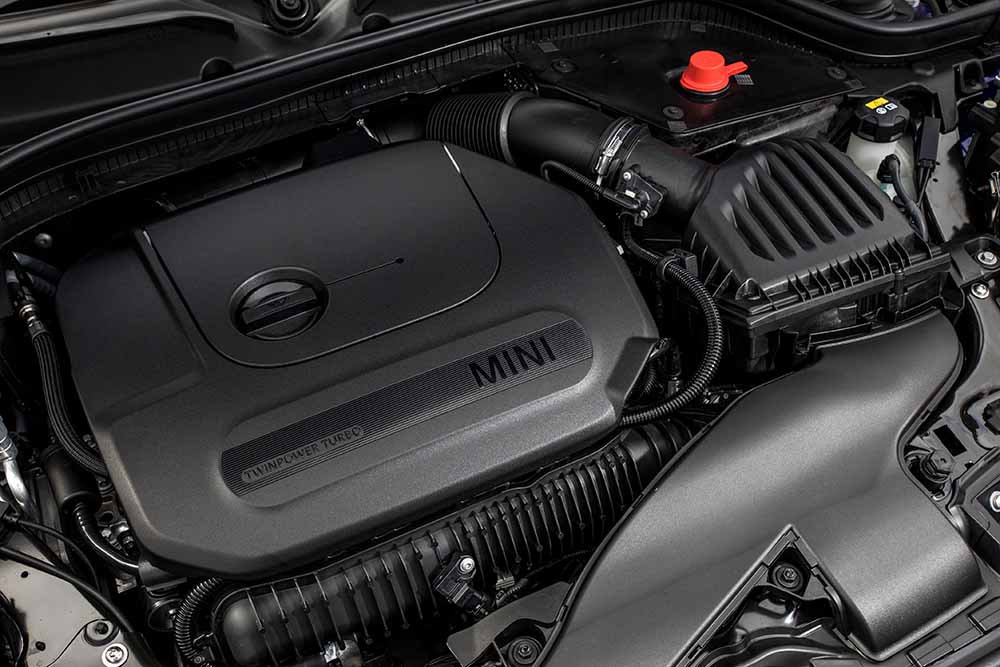 The range-entry Cooper gets a 1.5-litre three-pot engine which offers 134hp/230Nm, while the Cooper S has a 2.0-litre four-cylinder engine offering 189hp. The John Cooper Works bumps that same engine up to 228hp, making it one of the fastest and exciting supermini hot hatches around.

The Cooper’s three-cylinder turbo is my pick of the range as it offers plenty of punch for overtaking and enjoying the chassis at a more reasonable price and with decent fuel economy. There’s a choice of a six-speed manual or the new seven-speed Steptronic transmission with double clutch and electronic shift selector. I would choose the manual, as the Steptronic auto isn’t the best at selecting the right gear to be in at the right moment when left to its own devices.

The potent JCW, with its 320Nm of torque retains its conventional eight-speed auto ‘box.

The Cooper S is the sweet spot for drivers seeking a decent helping of performance, feeling genuinely brisk and sounding good in the process. However, it's quite thirsty as a result and all a bit unnecessary in a convertible that's all about posing and nipping around town.

Using the satnav’s Real Time Traffic Information (RTTI) data and the car’s inbuilt camera systems, the stop/start can be intelligently controlled to identify situations in which it is better not to switch off the engine: for example when stopping briefly before making a turn or entering a roundabout, or if the traffic ahead has started moving again. With its new range of turbocharged engines, the new MINI convertible is reasonably cheap to run. The extra weight needed to strengthen the chassis means the figures drop from the equivalent hatchback model but the difference alone shouldn’t be enough to dissuade you from buying.

The most economical model is the Cooper which returns 54.3mpg when fitted with the manual or the new Steptronic auto and emits 119g/km of CO2 (manual) or 118g/km (auto).

Considering the performance on offer, the bigger-engined Cooper S’ 44.8mpg and 145g/km figures are reasonable, with the JCW model only managing 42.2mpg and 152g/km of CO2. Neither will do much better than 35mpg in the real-world, however.

An optional MINI Driving Mode system is available that lets you choose between Sport, Mid and Green settings. Switching it to Green mode will change the throttle, steering and air conditioning to optimise the car for fuel saving, which could add a few extra miles providing your driving is smooth enough. MINI convertible models drive very similarly to their hatchback equivalents, which is impressive considering that removing the roof of a car traditionally has a negative effect on handling. It does have a slightly greater tendency to run wide when cornering hard (thanks to that extra 120kg), but the feeling through the steering wheel is just as accurate and involving as ever.

The MINI Convertible generates plenty of grip as well as feeling agile and adjustable mid-corner. As with other MINIs, there are three driving modes to choose from: Green, Mid and Sport. Sport makes the car most fun, as it sharpens up the throttle and makes the steering more involving by decreasing the amount of assistance. On the Cooper S and John Cooper Works convertible models, the exhaust also makes lots of entertaining pops and bangs when in Sport mode. There's also a nifty rev-matching function for the manual gearbox to make downshifts on manual versions smoother.

The recently introduced dual-clutch seven-speed Steptronic auto ‘box is a good match for the MINI's character, providing smooth yet rapid gear changes – it’s just a shame it doesn't include paddles behind the steering wheel to use when the 'box is in manual mode. All MINI convertibles have a slightly firm suspension set-up, like in the hatchback, but this is a trade-off of being one of the best-handling small cars on sale. It's never uncomfortable, but larger alloy wheels will accentuate the firmness.

If you're determined to maximise driving excitement in a MINI, you'll want the John Cooper Works model. The steering is direct, fast and, if you've put the car in Sport mode, well-weighted, too. Body lean is just about non-existent, even under hard cornering, although stiffening the suspension to achieve this has made the ride excessively firm and some may find it a bit much. As a desirable, stylish car that’s fun to drive, the MINI convertible commands a higher price than most two-or four seat rivals. The regular Cooper gets my nod over the more powerful, more expensive Cooper S, because to be honest the extra power doesn’t make enough difference to justify spending more.

If you’re after a compact, fun car that delivers wind-in-your-hair thrills, there isn’t much out there that can beat the MINI Convertible.

The split personality hot hatch that’s not so Mini.