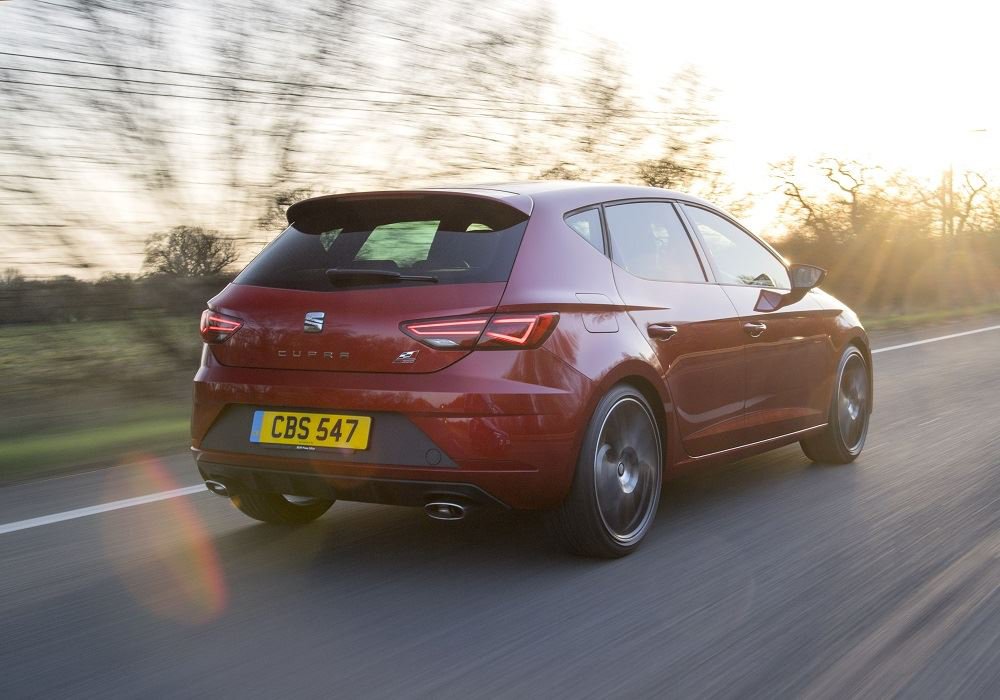 The affable SEAT Leon has been part of the UK market for nearly 20 years and, like all VW Group products, has evolved dramatically in that time. The third-generation Leon arrived in 2012 and belatedly, it’s time for a 2017 model-year refresh.

The upgrades given to the 2017 Leon all look to be strategically planned and positioned exactly where they should be. There’s new exterior lighting units with LED strips, the radiator grille has grown some 3cm in width and now features an elegant chrome surround.

Down below, there’s a wider air dam to go with larger corner air inlets that are also home to the LED fog lights. At the rear, there’s a new tail light layout with LED lights to go with a revised hatch lid and rear fascia. 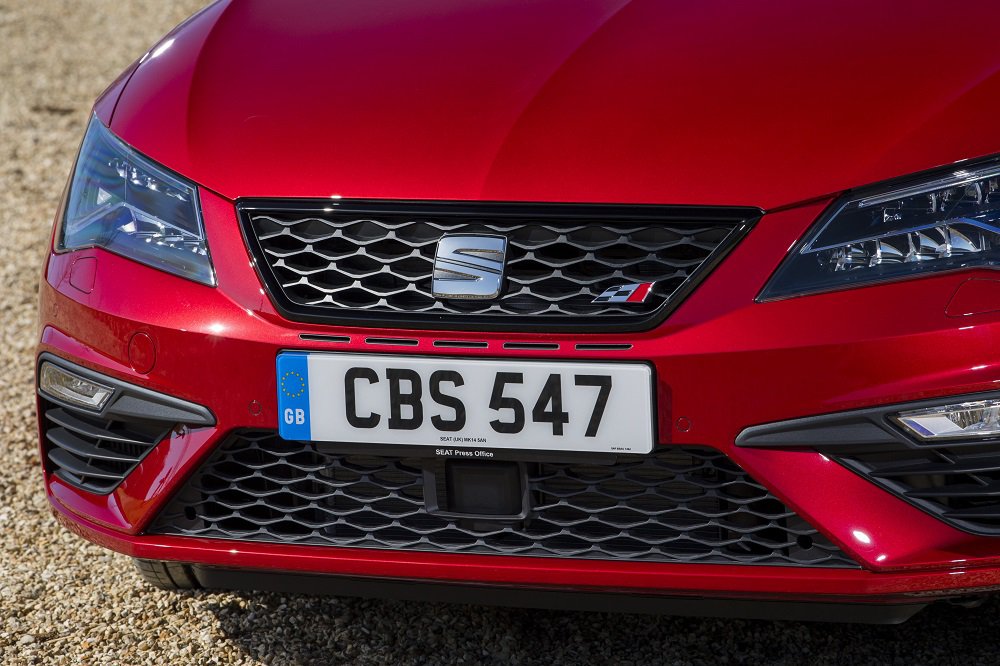 The standard SEAT Leon now has a brand new optional three-pot power plant added to the engine line-up, but what I really want to tell you about this week is what’s happening at the other end of the Leon scale; the new Leon Cupra 300.

The more astute of you will have already ascertained that peak power output has been raised from 290 to 300 PS on the new model, but with that also comes a welcome upping of torque by 30 Nm.

Unlike its rivals, the collection of subtle ‘Cupra 300’ badges are available on three body styles–the three-door SC, a five-door Hatch and the all-wheel-drive ST estate. So that’s hot, hot versatile and hot practical! 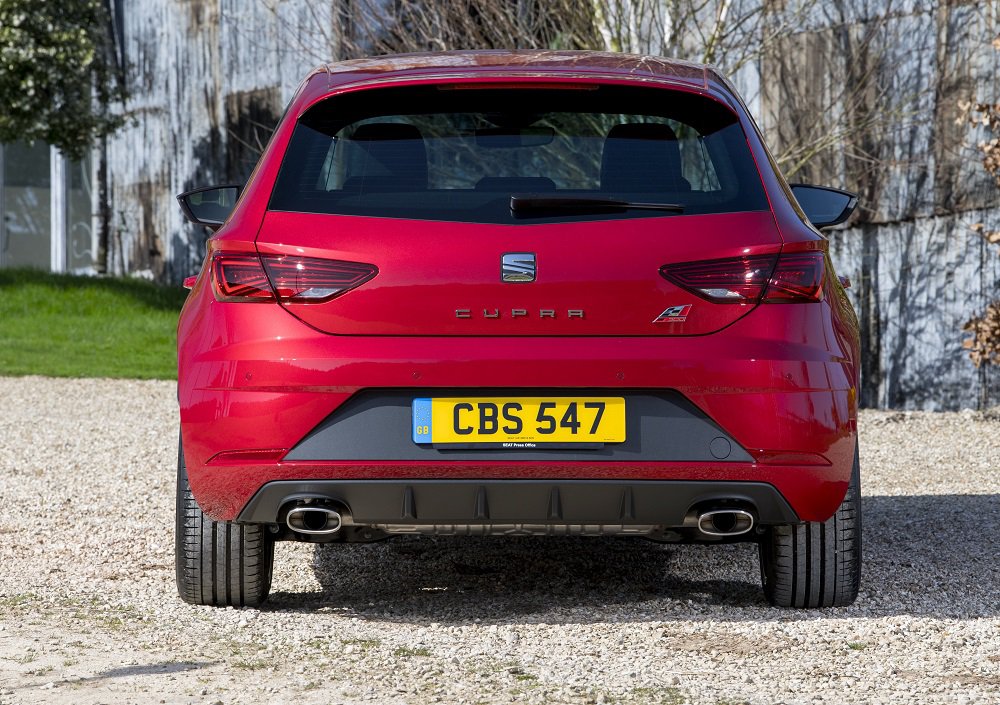 In terms of the Cupra 300 variant, there really aren’t any details on the exterior that will separate it from non-Cupra Leons. There is, of course, a good sprinkling of Cupra 300 badging and red brake calipers front and rear emblazoned with the CUPRA logo, but there is little else in terms of more aggressive looks or extra aerodynamics. Then again, this is a hot hatch that we’re talking about, so what really matters is the single, overall design, not the tacky little bits and pieces found on a Japanese rival.

And that’s okay, as the standard facelifted Leon looks pretty aggressive as it is, especially in the ‘Desire Red’ as the test car. That front fascia, in particular, is actually pretty menacing for something that is in any way related to VW, plus the triple side creases are in all the right places. To be honest–and perhaps divisive–the Leon actually looks a little better than the VW Golf upon which it is based. 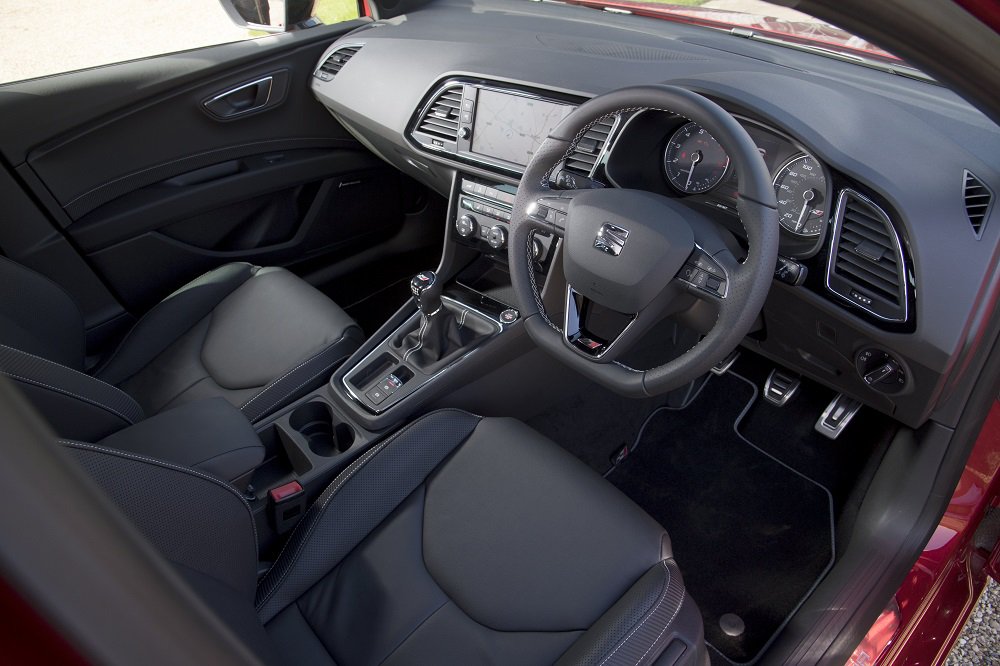 The new Cupra 300 benefits from a new center console, an electronic parking brake and advanced sound insulation to reduce road noise. It also gets the updated Media System Plus that pairs an eight-inch screen with a connectivity hub that includes wireless phone charging

There are a few details to segregate the Cupra 300 from lesser Leons, though. A hand-stitched leather, flat-bottomed sports steering wheel and Alcantara trim on the doors. The seats are far removed from any Recaro ‘sports’ offering, but they do have decent thigh and kidney bolsters for support during more spirited driving and have the Cupra logo embossed into them. There’s also alloy pedals and ambient LED lighting.

In terms of space, the three and five-door hatchbacks each have a 380-litre boot, which is the same capacity as a VW Golf's and bigger than that of the Ford Focus. It's easily big enough to get a couple of large suitcases or a child’s buggy into. And while there is a high load lip to lift luggage over, the opening is usefully wide. As a bonus, the seats fold should you be planning a trip to Ikea or B&Q.

At the rear, the five-door hatch Leon has decent access and egress with competitive amounts of leg and head room. A couple of adults will fit comfortably in the back, but it’s unlikely a third would be overly amused. 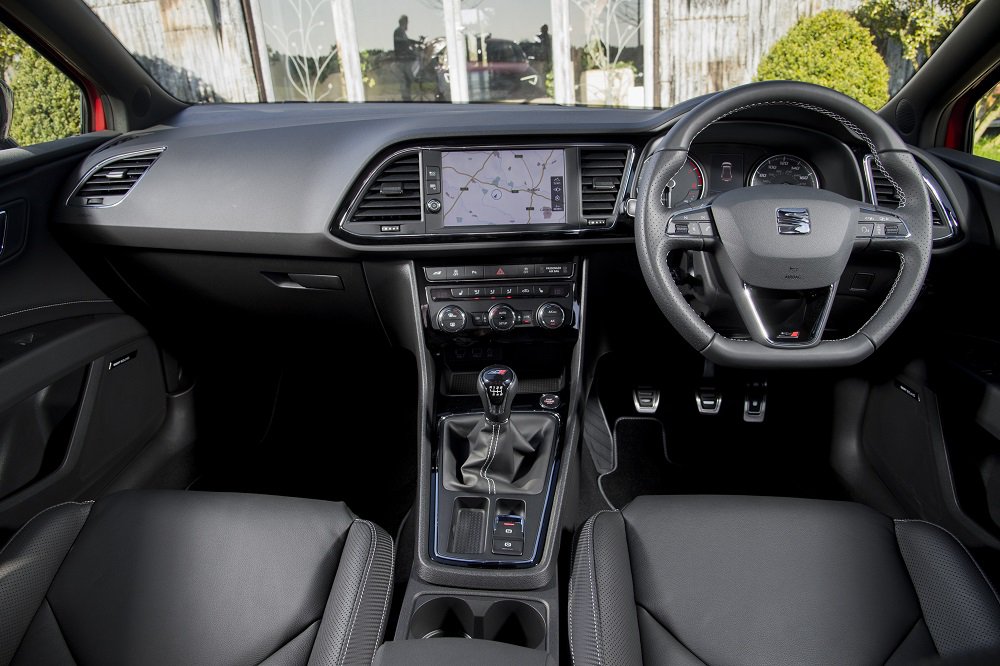 The touchscreen infotainment system is pretty easy to use. Okay, the smartphone-style pinch function for the map isn’t very responsive, but the rest of the menus are and the graphics look sharp. It comes with sat-nav, SEAT FullLink, Bluetooth and a DAB radio. You also get stereo controls on the steering wheel and a multi-function colour display between the rev counter and speedo.

There is also a plethora of driver-assist systems that come with the new Cupra 300, such as Traffic Jam Assist, Lane Assist, Adaptive Cruise Control, and Pedestrian Protection. There is, of course, the electric parking brake, but you also get SEAT’s own keyless entry and start system.

Finally, SEAT’s Cupra Drive Profile offers the choice of four different driving modes; ‘Comfort’ softens things up to give the most comfortable and pliant ride, while ‘Sport’ turns the performance screws to reduce body roll when cornering at higher speeds. The bonkers ‘Cupra’ mode is where all hell breaks loose. SEAT says ‘Cupra’ mode “takes the driving experience to another level”. I would heartily agree and add that ‘Sport’ is adequate for everyday driving and ‘Cupra’ is best left to more experienced hands–or the track day. ‘Individual’ mode facilitates customised settings to dial things in just the way you like. 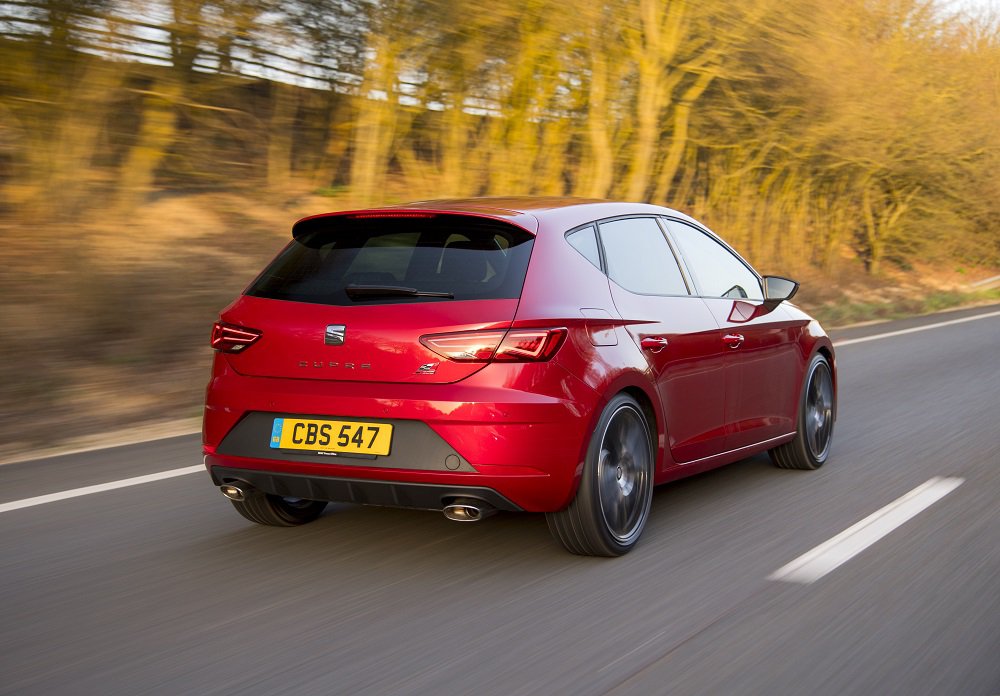 On the test car, the engine was ill-paired with a bog-standard six-speed, long-gate manual gearbox that, on the Cupra was a little too slow and notchy for my liking. If your budget allows an additional £1,350, opt for the six-speed DSG automatic which is a tad quicker and allows total concentration on the job in hand. It’ll be needed.

As far as performance goes, the Cupra will reach 62mpg from a dead start in 5.8 seconds. Top speed remains limited to 155 mph and for now the three- and five-door hatchback models will soldier on with front-wheel-drive, where the massive power level is very difficult to put down on the black stuff without spinning the wheels or worse, a tendency for axle tramp to rear its ugly head.

One can only hope that the Haldex all-wheel-drive system found on the Leon Cupra 300 estate will one day find itself on the hatchback variant, where it is sorely needed. 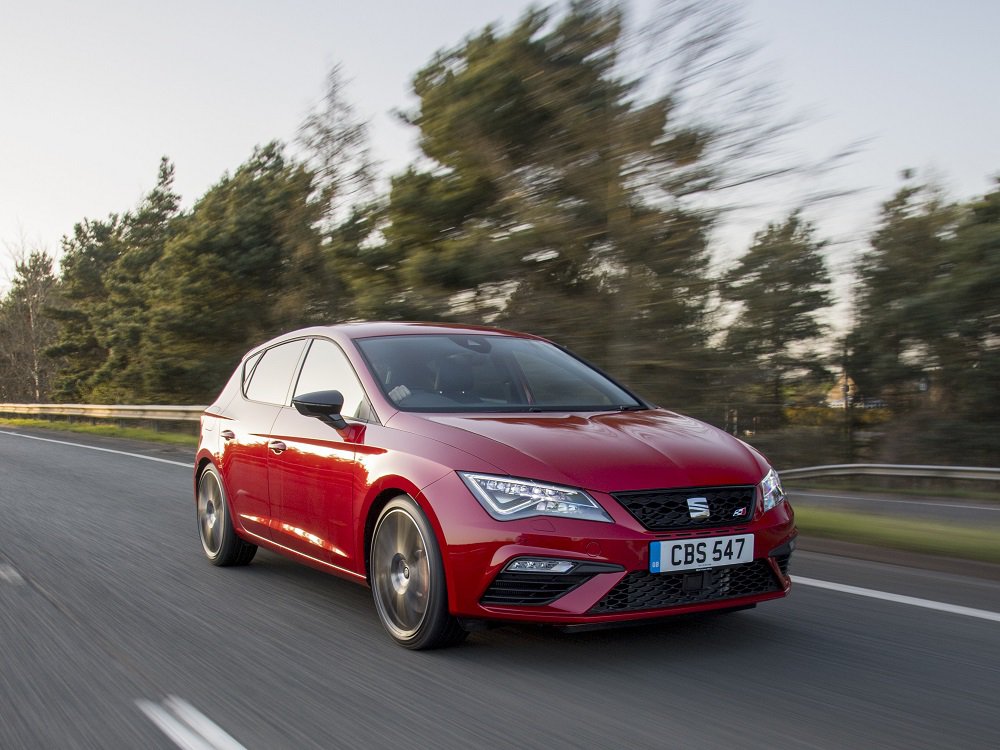 As the engine happily pulls without fuss or fanfare from very low revs, the Leon Cupra 300 is actually quite a relaxing mode of transportation–right up until you decide to give it some welly. On a smooth and dry road, the Cupra 300 accelerates savagely, thrusting you against the back of your seat and sending the speedo needle soaring happily to the 6k rpm red line.

You would be forgiven for thinking that perhaps there may be too much power for the chassis, though. Throw in a few crusty bumps and things become a little undone all too quickly. Given that unruliness, it was surprising to find very little in the way of torque steer.

Fortunately, you’ll soon find out that the Cupra 300 has bucket loads of grip. What it doesn’t have is the kind of delicious adjustability that marks out the very best hot hatches. Offer excessive speed in a corner and you will understeer.

While you can ramp up the firmness of the adaptive dampers, they work best in Comfort mode on anything other than the smoothest of surfaces. Try Sport or Cupra mode on a B-road and its unruliness feels like you’ll fly through the nearest hedgerow. 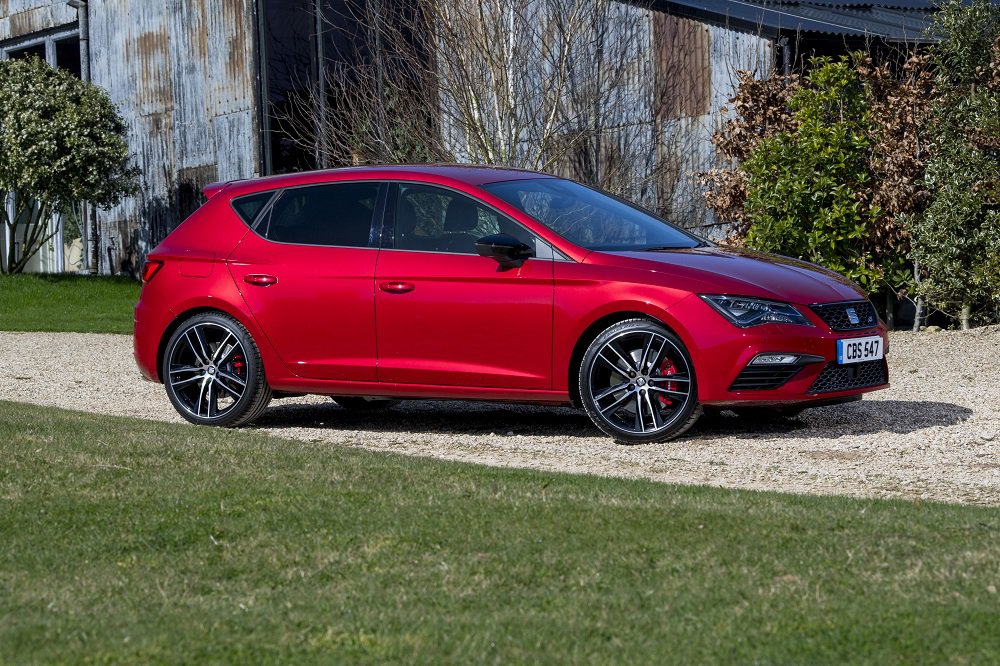 The new SEAT Leon Cupra 300 (along with the new Golf R), falls far short of the near-feral performance offered by the biggest hit in the pocket rocket market right now, the all-wheel-drive, 345bhp Ford Focus RS. But, if you like the minimalist nature of the Leon Cupra 300 then fine, go for it.

Don’t get me wrong, it isn’t a bad car in any sense of the word and it’s definitely an improvement over the last model. But if SEAT really wants to find itself closer to the throne in the hot hatch arena, it simply needs to deliver more power and better performance, likely with the introduction of all-wheel-drive.

Until it does, there will always be better hot hatch options out there as long as you’re willing to pay for them.

Earlier this week, SEAT revealed the production version if it’s...