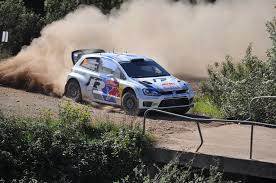 Since the beginning of the WRC (over 40 years ago), Portugal has been recognised as one of the top locations for international rally sport. Now set in the Algarve (since 2007), the gravel stages can be very demanding on tires – it's regarded as one of the most technically difficult gravel rounds. It's a challenging race and has been crowned the 'Best Rally in the World' on five occasions now; but was this the best race in the world?

It certainly was for Frenchman Sebastien Ogier. He won Rally Portugal for the fourth time (his 19th win overall), second as a VW driver, and dominated the race through all stages. He now equals Markku Alen on rally wins. During Saturday's stages it was clear that Ogier had secured victory, shifting from his 6.5 seconds from Finland's Mikko Hirvonen at the beginning of the day to 38.1 seconds by the end. Hirvonen won second place with his Ford, even after being just 0.4 seconds slower than Ogier after the two splits. It was his first podium finish since returning to M-Sport.

Rally Portugal 2014 is said to have been as 'brutal as ever', claiming the cars of a few high-profile drivers, including VW's Jari-Matti Latvala, Citroen's Kris Meeke and RK M'Sport's Robert Kubica. Latvala (who won Rally Sweden back in February) did manage to get his car rebuilt and continue the race under the rules of Rally 2. Impressively, he still managed to finish the race in 16th place. After Ott Tanak rolled his Fiesta RS on Saturday morning, Norway's Mads Ostberg came third in his Citroen.

Although Ogier adopted a more cautious approach during the last leg, he made it a weekend worth maximum points, with a total of 28 after he claimed three points from an outstanding performance through the final Loule Power Stage.

When asked about Rally Portugal, Ogier said that Portugal is somewhere he loves to drive. He enjoyed his battle with Hirvonen for a big part of the rally and said his good tyre management at every stage made all the difference.

If you're interested in hiring a VW, why not have a look at our range here at Leasing Options?