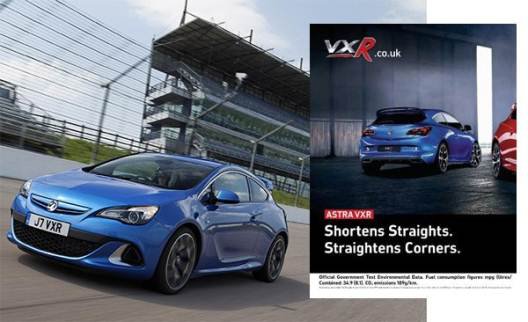 20 March 2013
So where the Advertising Standards Agency plucked up the nerve to judge an advert containing a stationary car as ‘socially irresponsible’ is just beyond us. Surely if that logic was enforced, more than 50% of movie and video game trailers would also be too socially irresponsible to show up on our TV screens too, right? The new Vauxhall VXR advert was deemed to be a breach of ‘social responsibility’ rules, after the complaint of just one person! The ASA suggested that the strapline ‘shortens Straights. Straights Corners’ encourages dangerous driving and speeding. Vauxhall’s parent company, General Motors, was quick to defend the advert though by pointing out the footer at the bottom, which clearly states, “Vauxhall does not condone irresponsible driving”. General Motors also went on to say that “the Astra VXRs were deliberately shown stationary to avoid any suggestion that the slogan related to speed”. However, the ASA sustained the complaint, on the basis that many members of the general public will interpret ‘Shortens Straights’ to mean that the VXR is built to cover straight stretches of road quicker than any other car, which would effectively encourage reckless driving and speeding. They went on to say that they “therefore considered that, by making speed the main message, the ad breached the [CAP advertising] Code and condoned irresponsible driving”. The VXR advert is to not appear in the offending form again. What are your thoughts on the new VXR ad? Let us know what you think of the ASA’s decision on our Twitter page @LeasingOptions. It is our promise here at Leasing Options to provide you with the lowest car leasing prices in the UK. We have an extensive range of cars to compliment anyone’s style, weather it is a business contract hire car or a personal car lease. Call us today on 0161 826 3877 or alternatively visit our website and browse through our car leasing models.

Back to beginning of creation.

Vauxhall has always been a brand available to the masses, born in...

One of Vauxhall’s most desirable models: the Astra GTC is yours from £181.99 a month