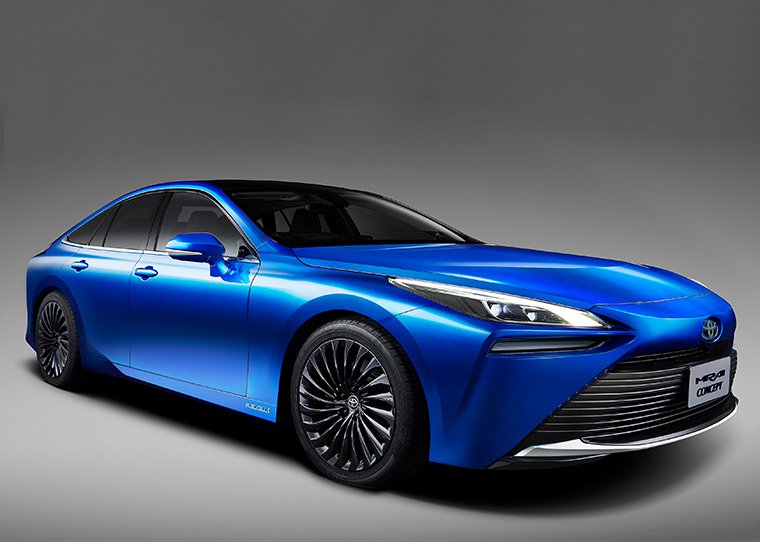 In the famous words of Leslie Philips…”Well, helloooo.”

Meet the all-new, second-generation 2020 Toyota Mirai. This is a blank sheet redesign of Toyota's hydrogen fuel cell electric vehicle – and it looks stunning. Which is a very, very good thing…

The first iteration Mirai looks like a boozed Friday night liaison between a Mk1 Prius and a Henry vacuum cleaner. But then, not many of you are likely to have seen one as only 247 have been registered in the UK since its introduction in 2014. Mind you, the lack of FCEV refuelling infrastructure will account for much of that small number.

The really good news is that the new Mirai is a total departure from the previous model. Rather than a compact front-wheel drive offering, the new one steps up to a significantly larger rear-wheel drive platform – possibly some derivative of the Lexus LS/LC's underpinnings. The Mirai's new 4.97m length and 2.92m wheelbase certainly suggests as much.

The new look is probably one of the best Toyota-penned designs of recent memory with a wide, low stance and a profile that matches an elongated front end with the sultry arc of the coupe-like roofline. The horizontal grille is Lexus-large and works well with the Mirai's deeply set headlamps and DRLs. Inside is a massive 12.3-inch widescreen display and digital instrument cluster coupled with a high level of luxury quality and appointment. It impinges on Lexus territory, whereas the old model was just Mk1 Prius weird. We can also expect a full suite of Toyota infotainment, safety and driver aid tech.

Of course, the Mirai is still a fuel cell electric vehicle. Details about the powertrain, performance and efficiency are slim for now, but we do know that the 2020 model will feature a new generation of Toyota's fuel cell that is more efficient than the current technology. The larger Mirai has more room for hydrogen storage capacity which Toyota hopes will increase the FCEV's cruising range by about 30 per cent, which works out to about 400 miles between fill ups versus the previous 312. Expect the larger, more premium Mirai to also be more powerful and quieter than the outgoing one, too.

"We have pursued making a car that has emotional and attractive design appeal, as well as dynamic and responsive driving performance that can bring a smile to the faces of drivers," said Yoshikazu Tanaka, the Mirai's chief engineer. "I want customers to say, 'I chose the Mirai not because it's an FCEV, but because I really wanted this car, and it just happened to be an FCEV’." So far, the 2020 Toyota Mirai is looking pretty handsome, but looks are only part of the equation. We expect to learn more details of the new Mirai when it makes a more formal debut at the Tokyo Motor Show next week.

Scheduled for launch in 2020, initially in Japan, North America and Europe, the new Mirai will be much more than an eco-car, showing how its FCEV technology is no barrier to creating a vehicle that is both ultra-stylish and rewarding to drive, before going on UK sale in late 2020.

After a fifteen year hiatus and two missed generations, the Toyota...

Toyota Motors and Hino Motors have agreed to jointly develop a...