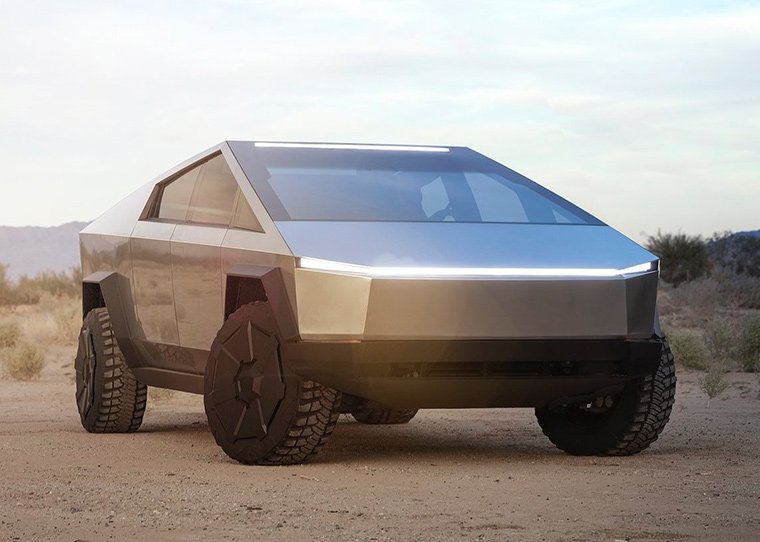 TESLA: New Cybertruck revealed – what we know so far

This is the all-new Tesla Cybertruck, an electric pickup that boasts a maximum single-charge range of over 500 miles and can tow up to 6,350kg. 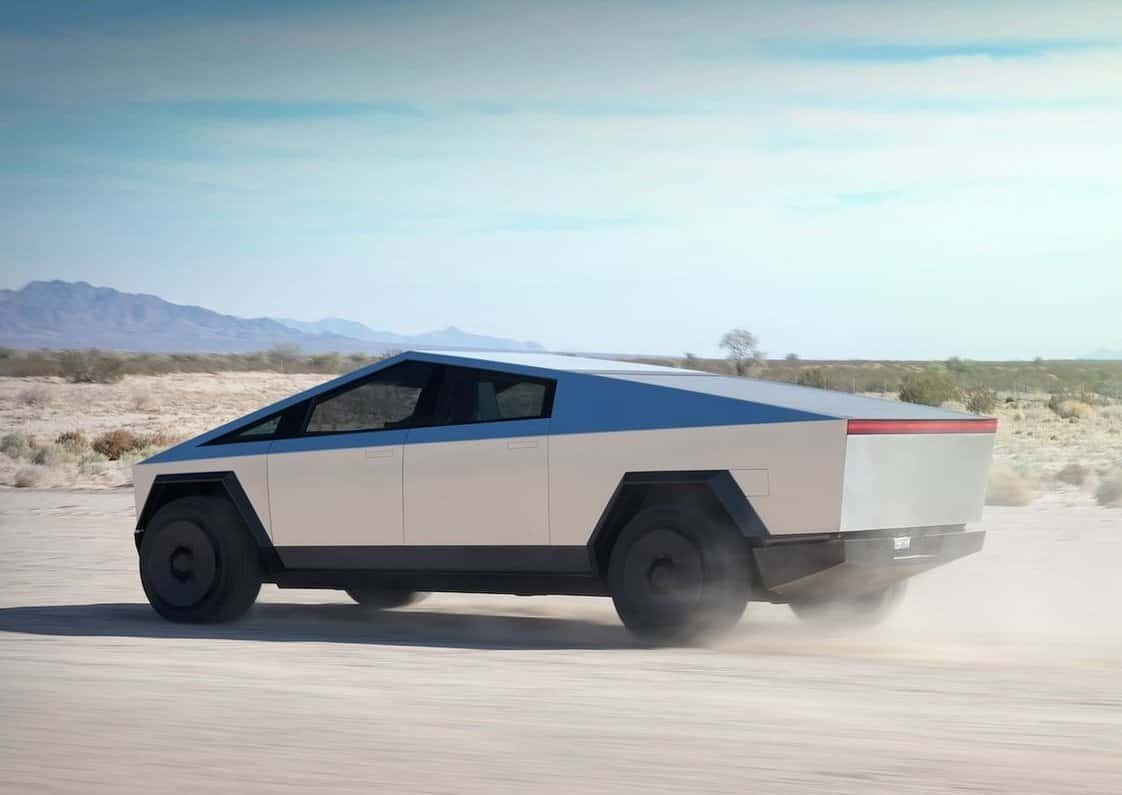 Tesla’s new electric Cybertruck pickup boasts striking appearance, a range of over 500 miles (on top-spec models) and features stainless-steel construction. It will go on sale in the United States from 2021. Two models will be offered, one with a single electric motor and another with two.

The Cybertruck was unveiled by Tesla boss Elon Musk at the Tesla Design Centre in Los Angeles. It would be no understatement to say that the pickup’s Lego-like shape and brash stainless-steel bodywork took many by surprise. 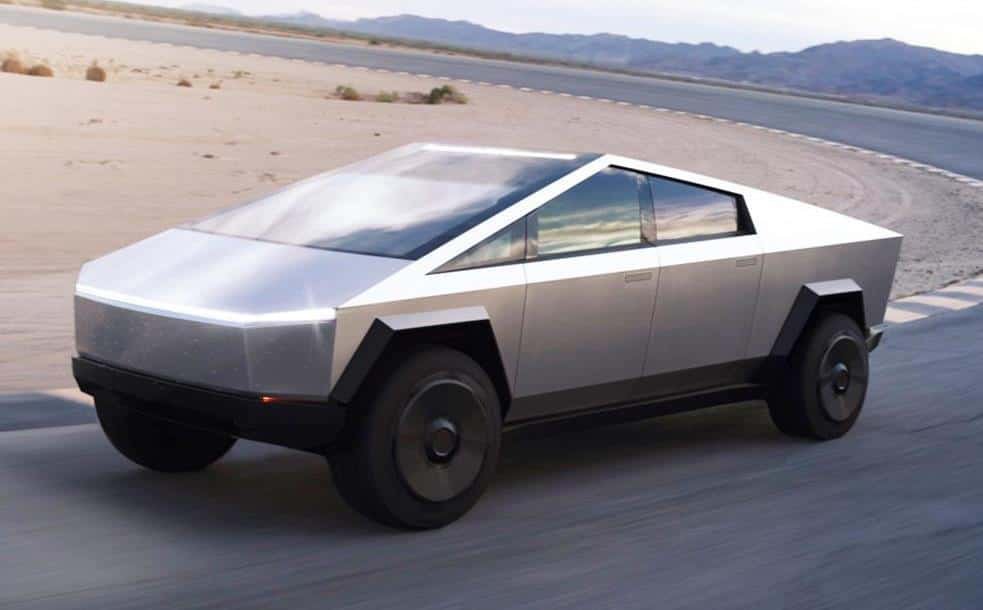 The Cybertruck is a chalk-and-cheese departure from the firm’s road cars with angular, sharp-edged bodywork, reminiscent of the Citroen Karin concept from 1980. The front features a narrow full-width light bar that incorporates a pair of thin upswept headlights. From the nose upwards, it features a simple continual bonnet and windscreen line that apexes sharply and descends into the rear tailgate. 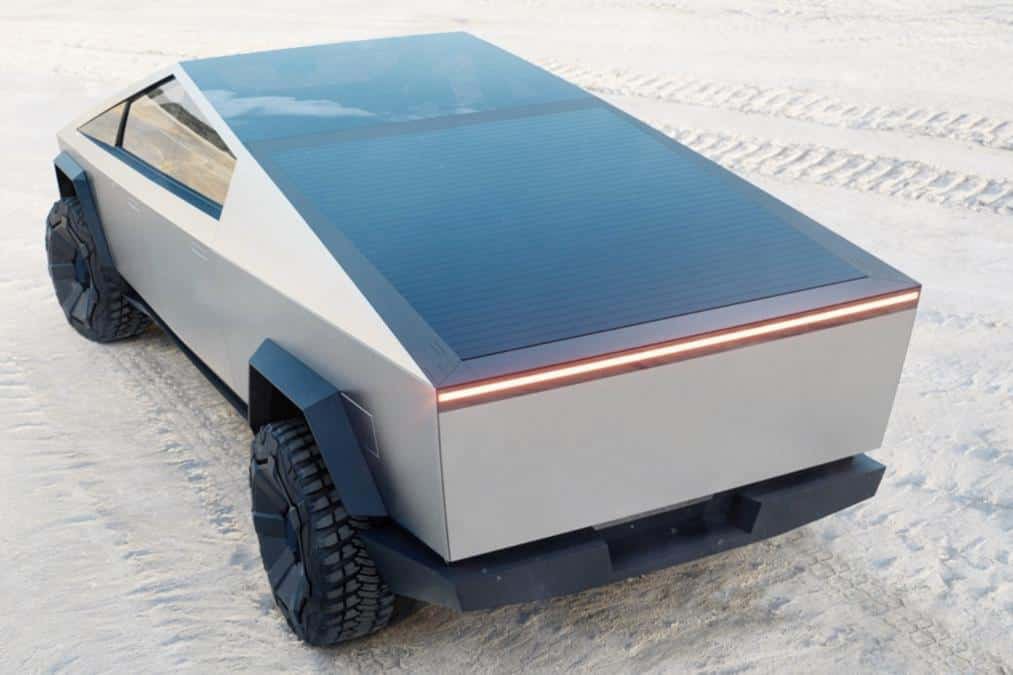 The rear features a single full-width light bar, with a completely flat tailgate design. This is complemented by black bodywork cladding on all sides with squared-off wheel arches that house large off-road wheels.

Like all pickups on sale in the USA, the Tesla Cybertruck is big, measuring in at 5,885mm long, 2,027mm wide and 1,905mm high, despite its swooping roofline. 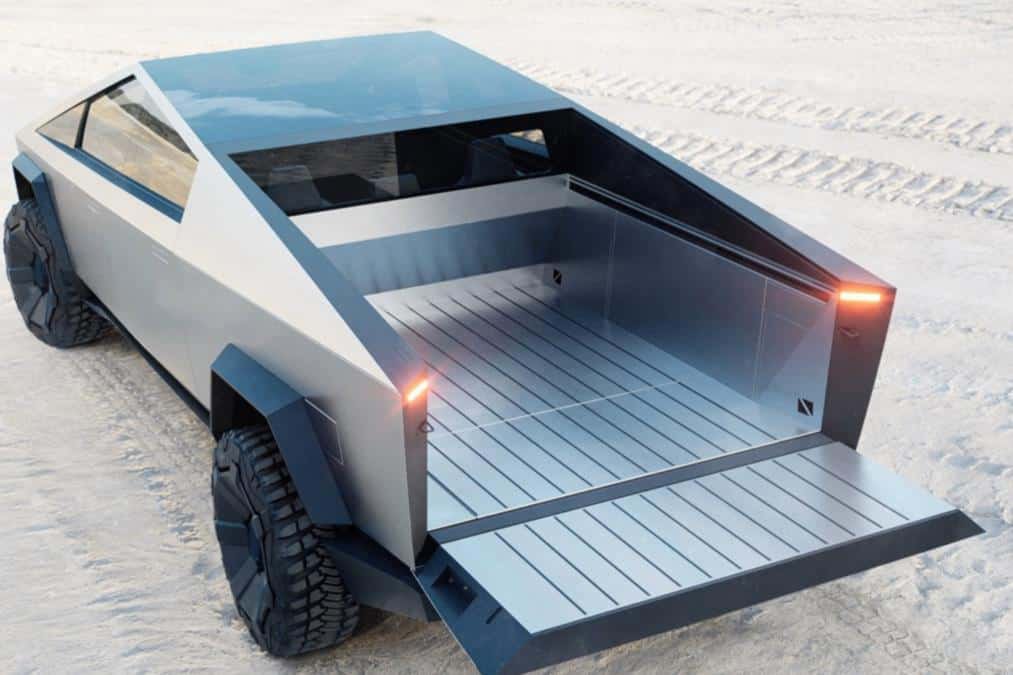 Despite the unusual styling, Tesla has confirmed that the Cybertruck will be as capable as any pickup available on the US market thanks to a 1,981mm long load bay, a payload capacity of up to 1,589kg, and 2,832 litres of lockable storage. The Cybertruck can tow up to 6,350kg in range-topping tri-motor specification. 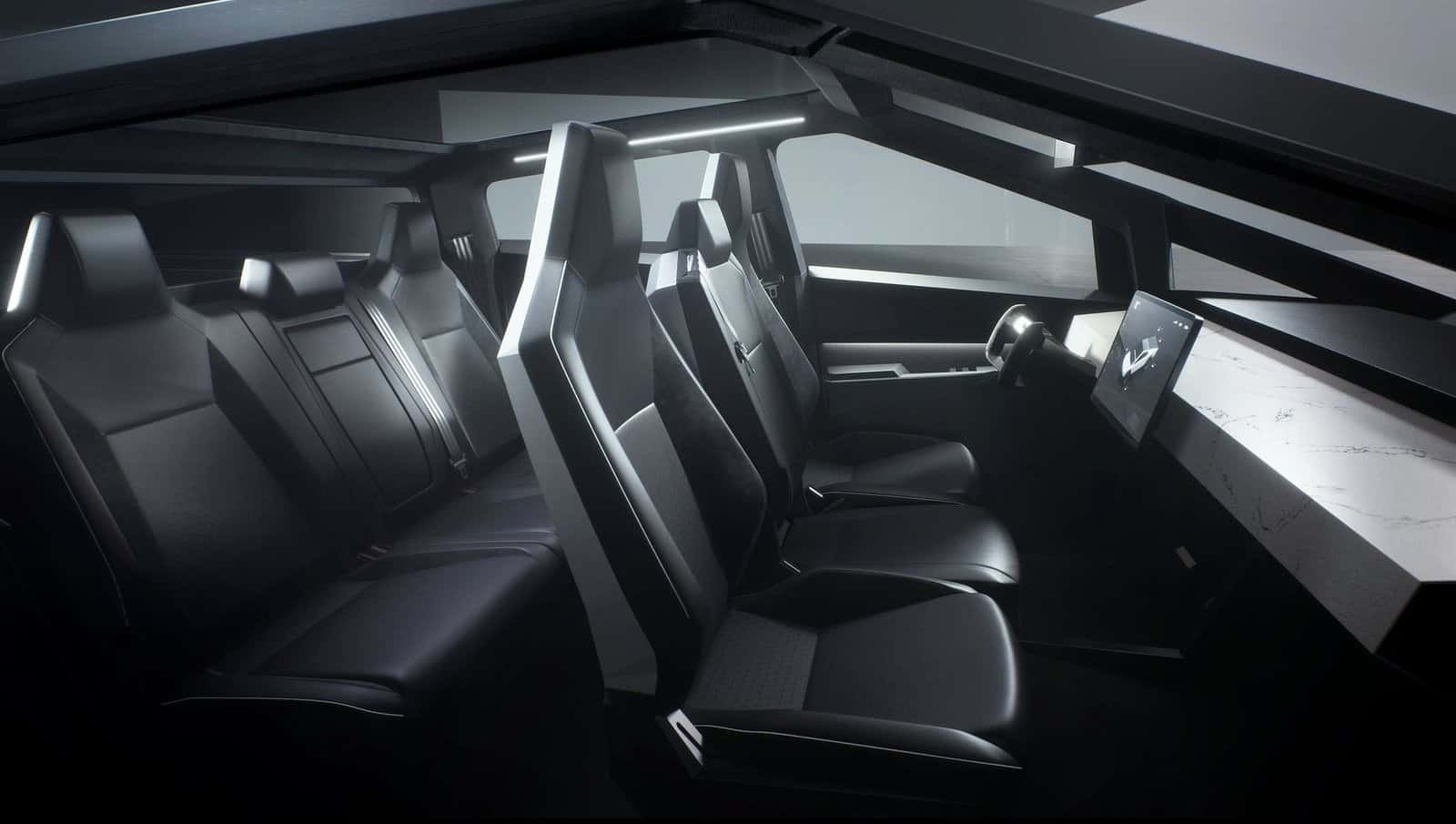 Inside, the Cybertruck looks to have seating for six across two rows, with the option to fold the front centre seat flat as an armrest. The dashboard mimics the design of the Model 3 with a large 17-inch touchscreen perched atop a flat linear surface with no other visible controls or switches. The Star Wars-like steering controller (it’s not really a ‘wheel’) is a flat-bottomed design with a cut-off top similar to that seen in the Tesla Roadster.

The Cybertruck also features a rear-view mirror display that uses a high-definition camera located in the tailgate (a feature first seen here in the all-new Range Rover Evoque), with a glass roof extending over the full length of the cabin. There are no external mirrors visible, so we can perhaps expect door-mounted cameras sending their images to an interior screen. 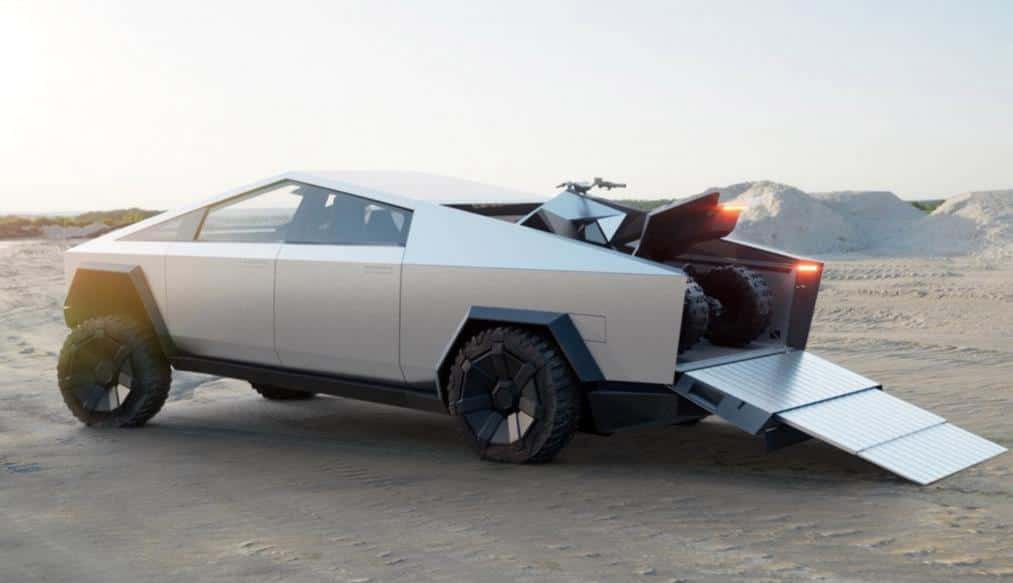 The vehicle uses air suspension, which can vary the ride height and lower the rear end for loading. It also has a deployable ramp, which was demonstrated at the reveal when a Tesla All-Terrain Vehicle was driven straight into the rear of the truck.

Musk claims the Cybertruck will be the toughest pickup available when it arrives in 2021 thanks to a body made from 30X cold-rolled stainless steel. It also features toughened, shatterproof glass, dubbed ‘Tesla Armor Glass’ that Musk described as ‘transparent metal’, but shattered during on-stage testing at the reveal. 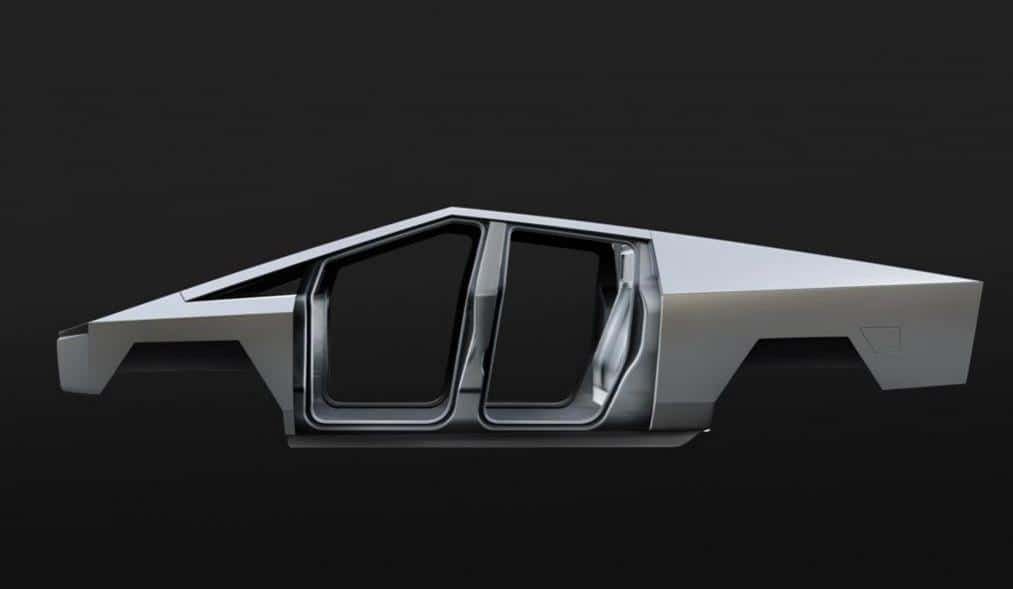 In single-motor, rear-wheel-drive specification, the Cybertruck will start at $39,900 in the US. It can get from 0-60mph in 6.5 seconds and has a top speed of 110mph. Tesla has yet to confirm the capacity of the battery pack, merely saying that the single motor model will have a range of over 250 miles. It shares the same 1,587kg payload capacity as the other models in the range but can only tow up to 3,402kg. 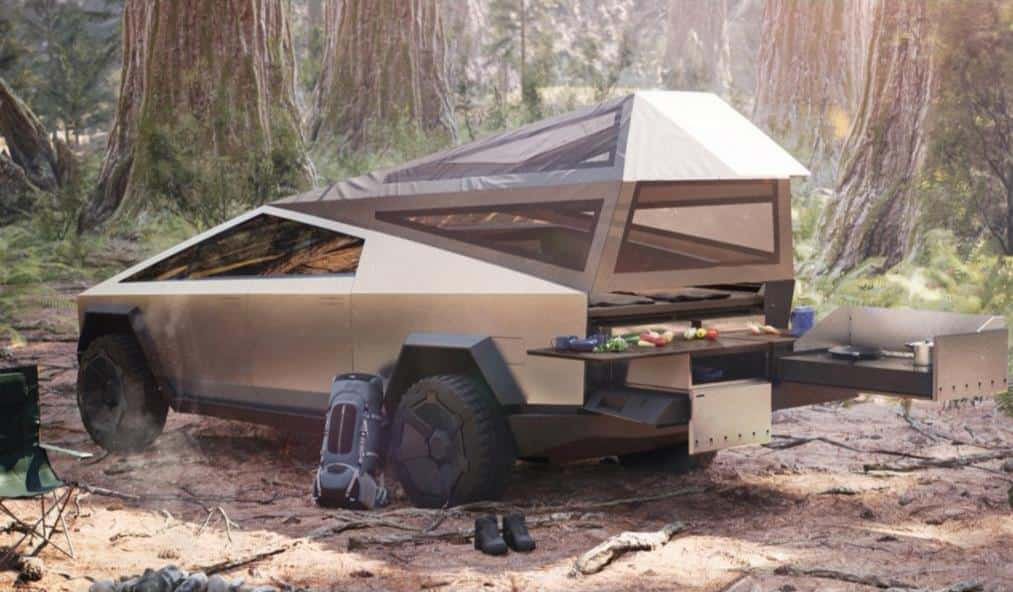 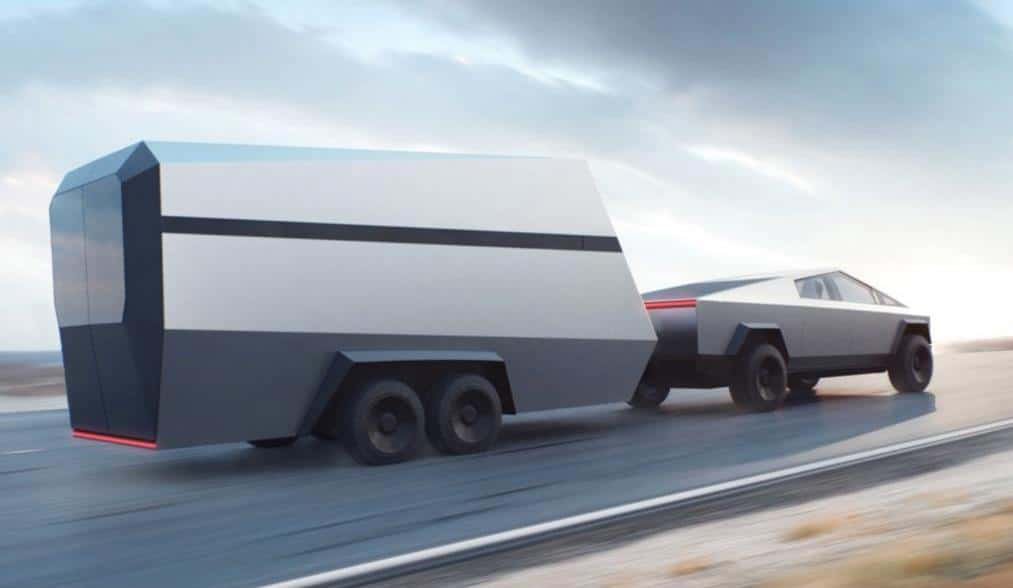 The middle-of-the-range dual-motor, all-wheel drive model boasts a range of over 300 miles on a single charge. It can sprint from 0-60mph in 4.5 seconds and has a top speed of 120mph.

There are no details of UK pricing or right-hand drive production, but UK buyers can place a deposit on a Cybertruck for £100

TESLA: Model 3 Review – An affordable entry to the US brand

If your lifestyle and work balance supports an electric car, the Tesla...