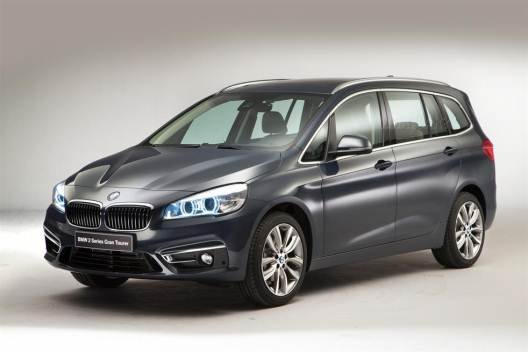 The new seven-seater is making its debut at next month’s Geneva motor show before going on sale in the UK in June. The Tourer is rival to Citroen’s Grand C4 Picasso, the Ford S-MAX and Renault’s Grand Scenic. Priced between £24,175 and £33,885 the new BMW is £3,000-£5,000 more expensive than any of the other manufacturers, although you get the luxury feel that comes with BMW.

The new model offers extra space, sliding middle row seats, folding rear seats, 16 inch alloys, dual-zone climate control, a powered tailgate and Bluetooth. The middle seats have also been raised 3mm to allow storage below and the seats slide and tilt forwards and backwards to allow access into the back. <

The new seven-seater is the same width as the five-seater, 53mm taller to allow headspace on the back row and 214mm longer to allow for sufficient leg and boot space.

So far the Active Tourer customer base has been 60-65% new to the BMW brand and the Gran Tourer is expected to attract 75% of new customers to the brand.