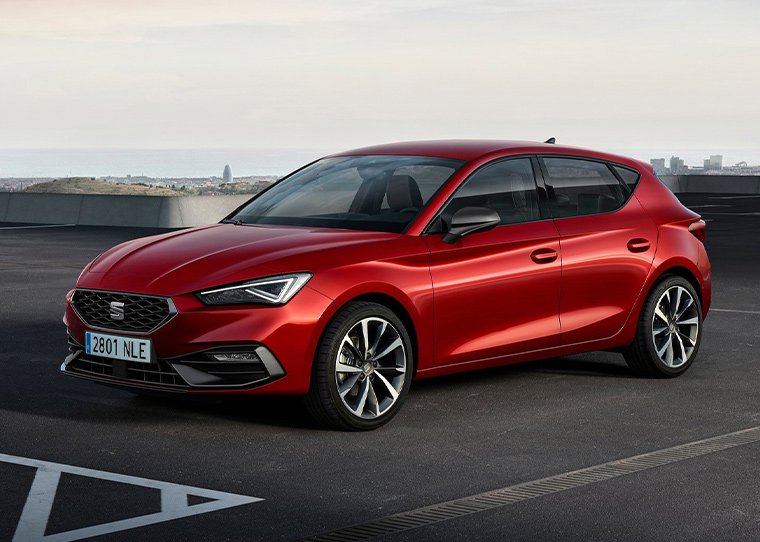 Earlier this week, SEAT revealed the production version if it’s all-new fourth-generation Leon Hatchback and ST estate at a glittering event held at the Martorell factory north-west of Barcelona.

Updated engines, hybrid technology and a minimalist interior with connected technology have all been added to help the Leon compete in a fiercely competitive sector of the market that includes the Ford Focus and Volkswagen Golf, to name just two of its numerous rivals. 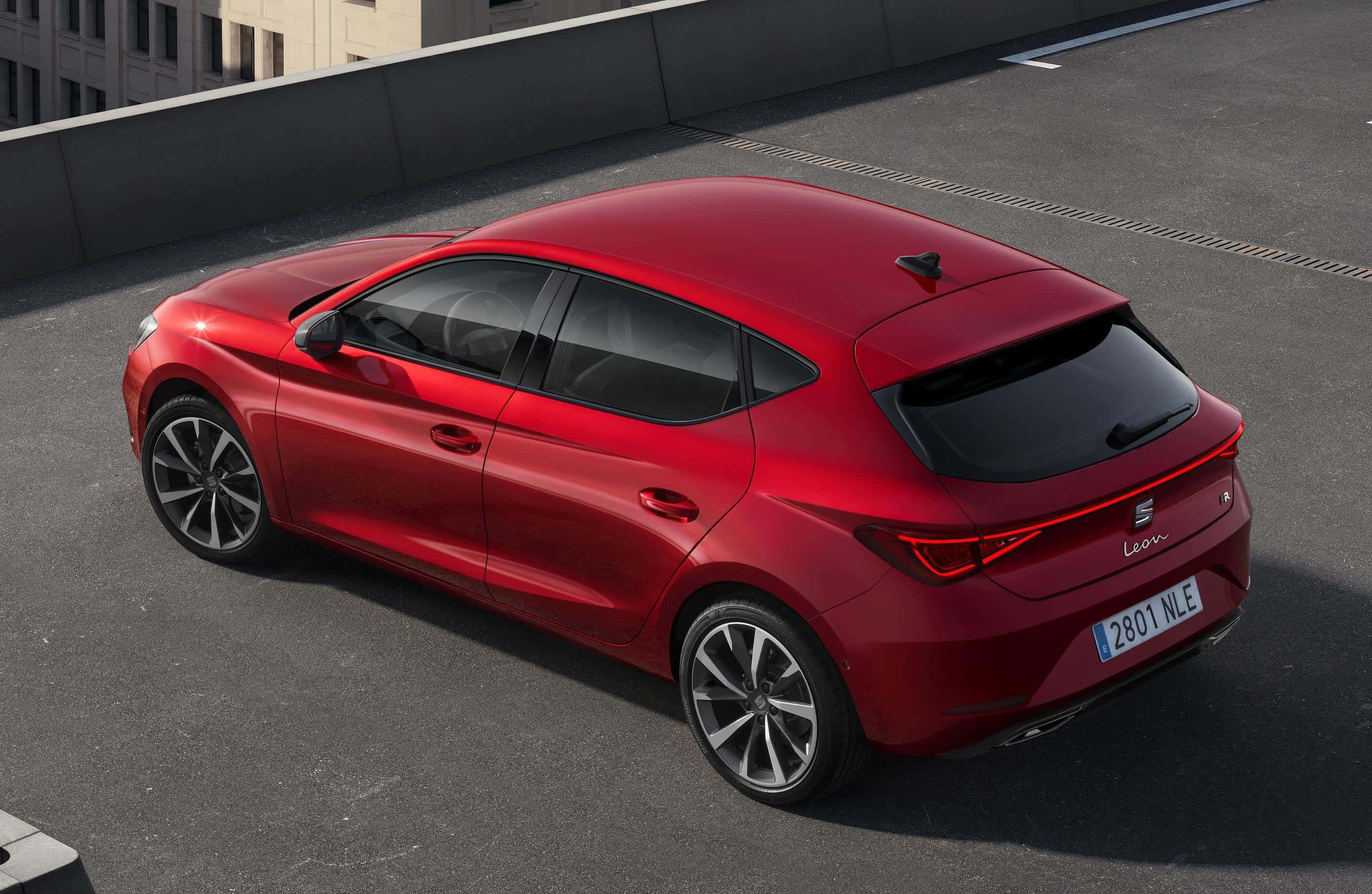 Outside, the changes are subtle enough that the car remains instantly recognisable as a Leon but are more comprehensive than a mere facelift. 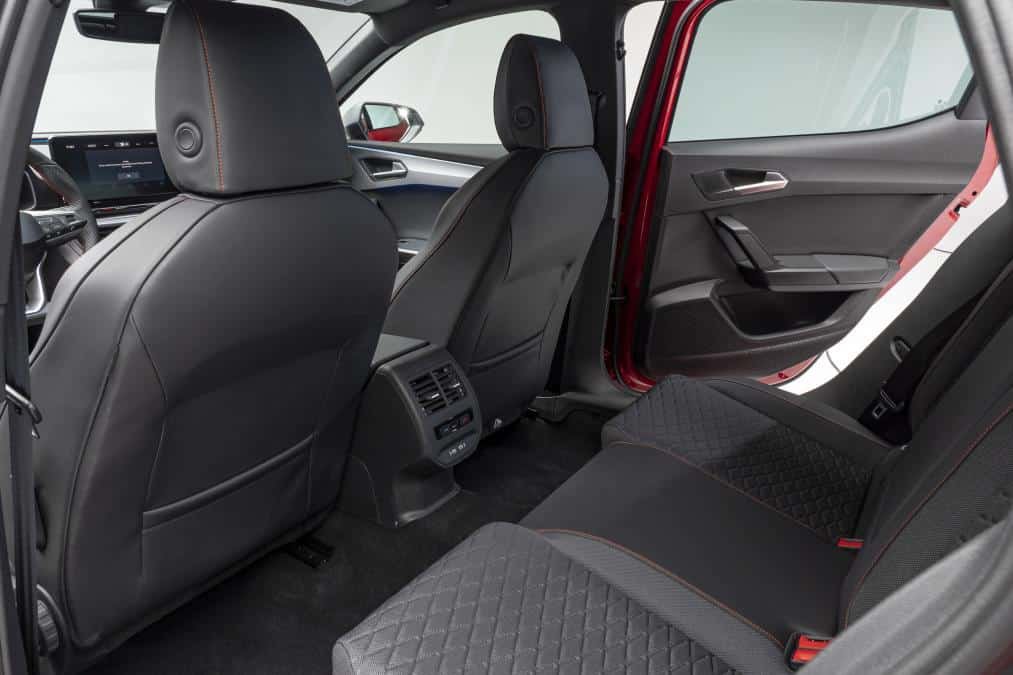 The front and rear wheels are pushed 50mm further apart for a more athletic stance, and there's a greater interplay between curves and sharp edges. Most noticeably, there's now a sweeping line flowing from above the front wheels and over the rear doors. Its low nose and windscreen pillars also curve rearwards, improving aerodynamics as well as style and metallic paint will come as standard. 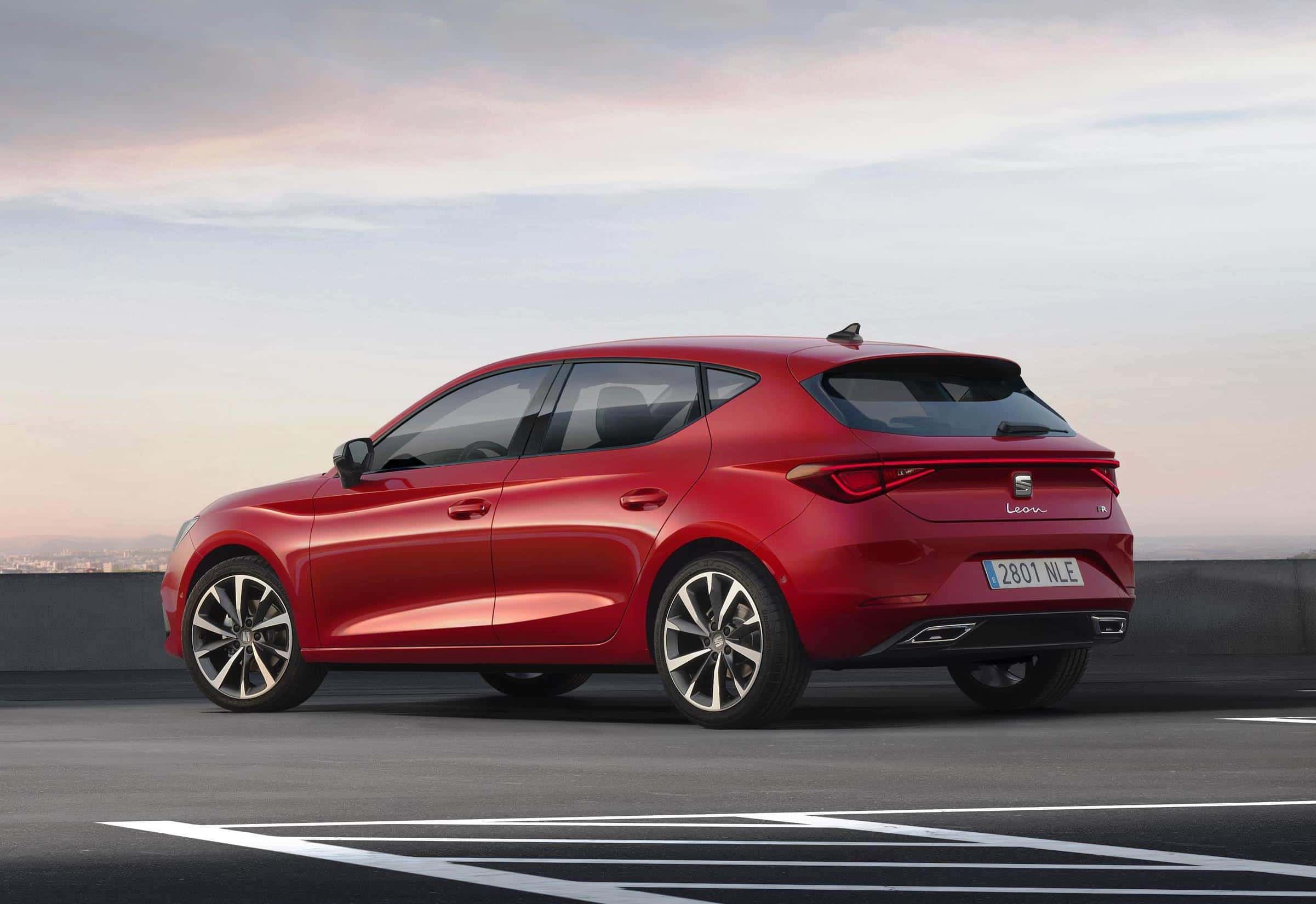 At the rear, the lights are connected by a full-width LED bar, body-coloured bumpers have a smooth shape and FR versions feature integrated chrome tailpipes. The hatchback is longer too: 86mm more than before but 17mm narrower and 3mm lower. 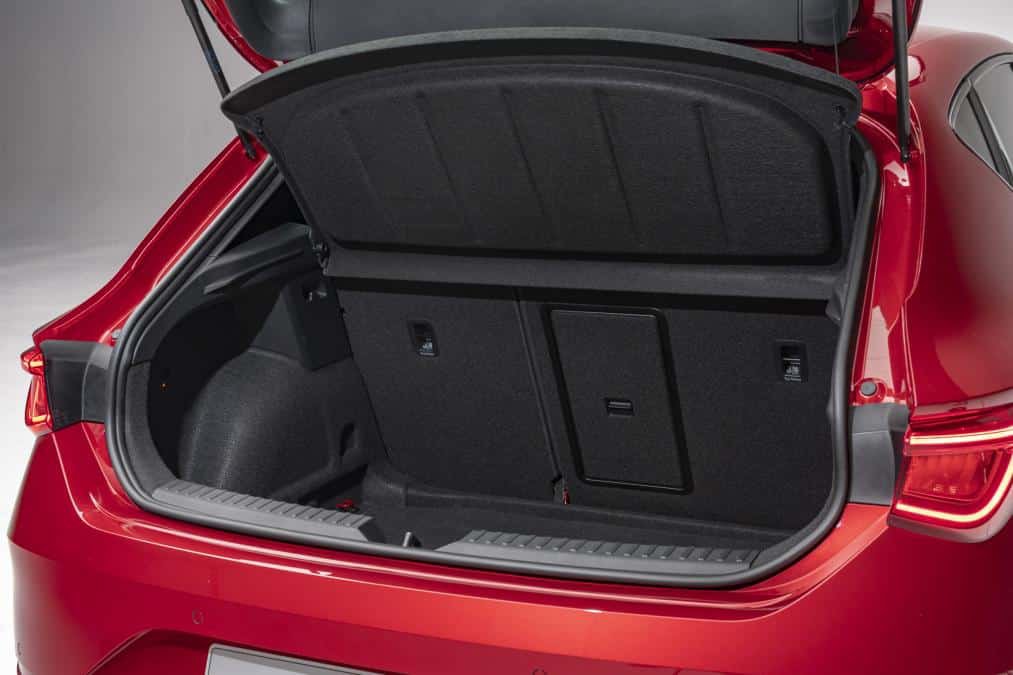 The Leon Estate gets a further 10mm increase in length, helping boot space grow from 587 to an impressive 617 litres. The hatchback's boot remains the same size as before at 380 litres. 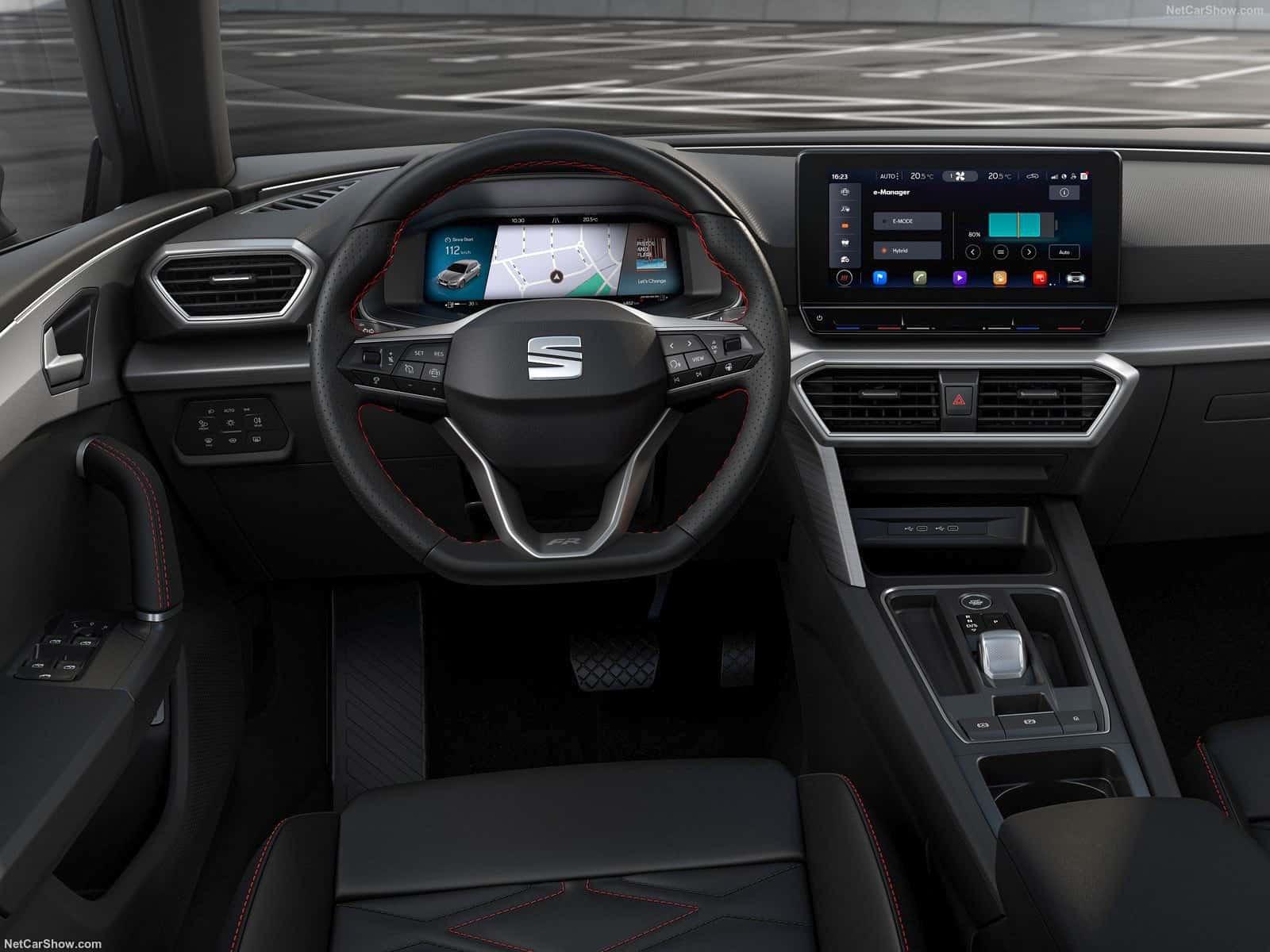 Inside, SEAT's designers have moved the central display from the dashboard so it's now a free-standing tablet, allowing for a much slimmer fascia, housing just a set of angular air vents, USB-C ports and lighting controls. A highly textured dashboard and swathe of dark silver trim accentuates the car’s sporty character. 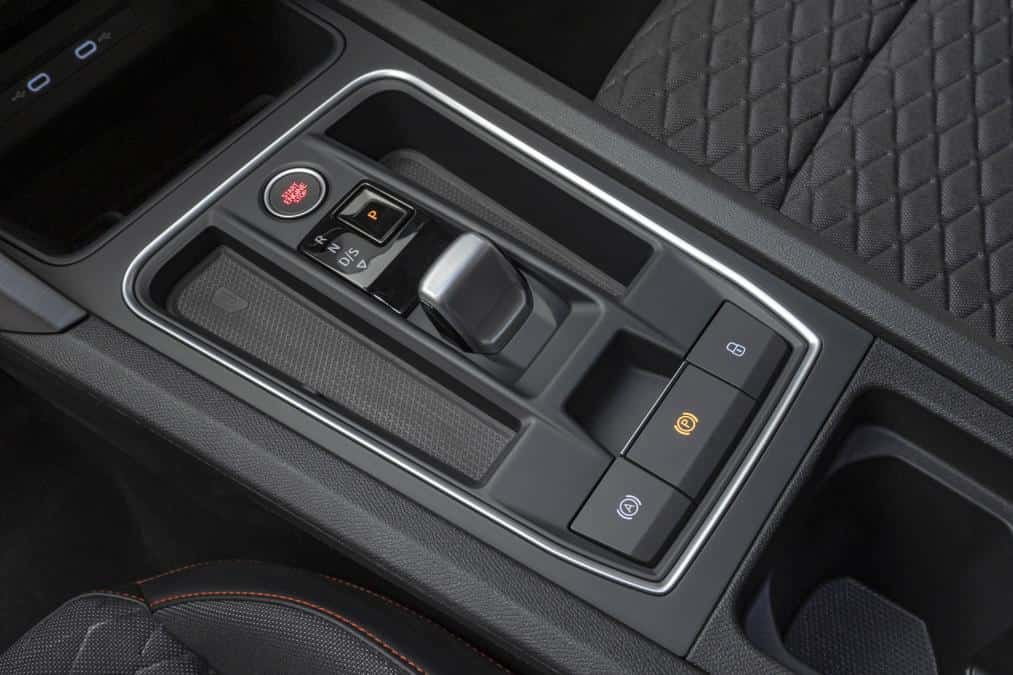 On the automatic version, a small rocker-switch replaces a traditional gear lever, freeing up space for cup holders, a smartphone tray and generous storage cubby. Instead of buttons, everything is focused on the 10-inch infotainment and 10.25-inch SEAT digital cockpit instrument displays that can be controlled using a combination of steering wheel controls, gesture recognition and voice commands. 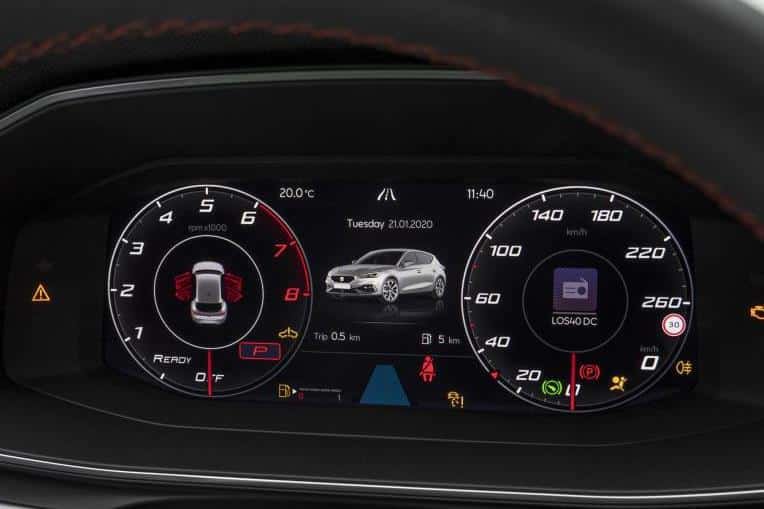 This fourth-generation Leon has an almost entirely digital user interface and relies heavily on connected services. This includes new 'CartoX' cloud-based tech that can warn drivers of hyper-local information such as the colour of the next set of traffic lights (ideal for blind drivers) and whether there's an accident up ahead. 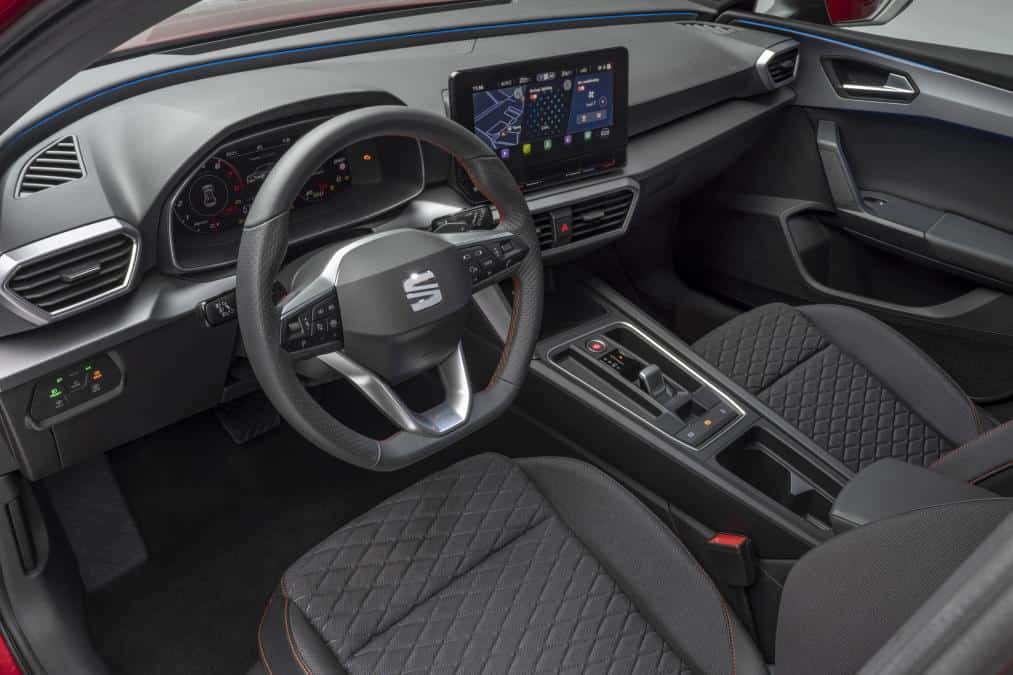 The new Leon rides on an updated version of the MQB platform used for the previous model and numerous other Volkswagen Group cars. Like the new Mk8 Volkswagen Golf, it also features a refreshed range of engines, some of which now get emissions-reducing electrified technology.

Engines come with a six-speed manual gearbox as standard but automatic transmissions are also expected to be popular. Choosing the latter also means 48-volt mild-tech is added, boosting efficiency by recuperating energy under braking and using it to power the car's electrics and provide a boost to acceleration.

Bang on trend, a plug-in hybrid version will also be available, based around a 1.4-litre petrol engine and with an electric range of 38 miles. This will qualify for a lower Benefit-in-Kind percentage band and entry into low emissions zones. It's unlikely we'll see a fully electric Mk4 Leon because SEAT is poised to launch its all-electric el-Born hatchback, which is around the same size. 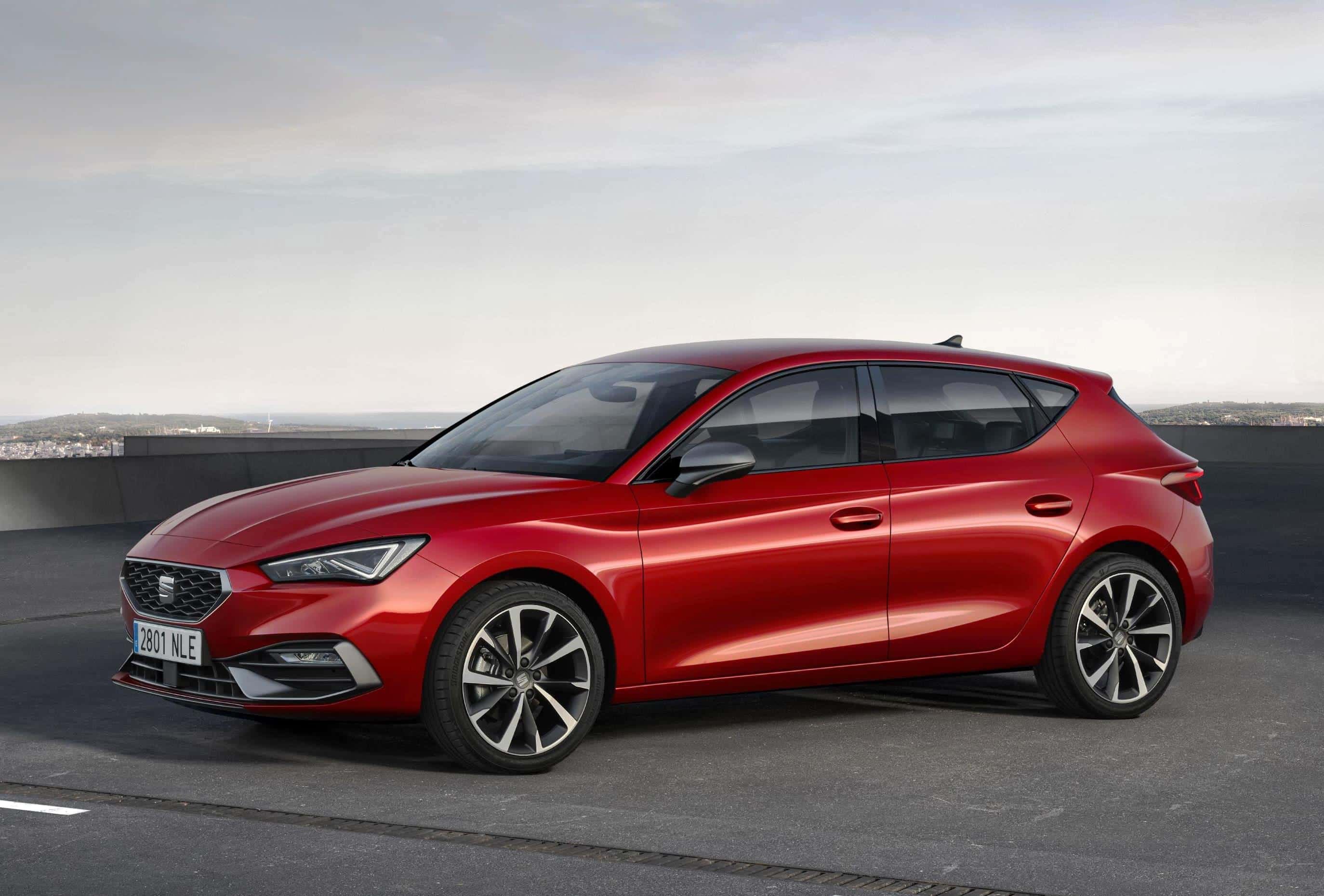 Style is a big part of SEAT's brief, so seven metallic paints will be standard. The Leon hatch and estate go on sale in the UK at the end of March and first deliveries are expected towards the end of April.

When it goes on UK sale in the summer, the new five-door Audi A3...