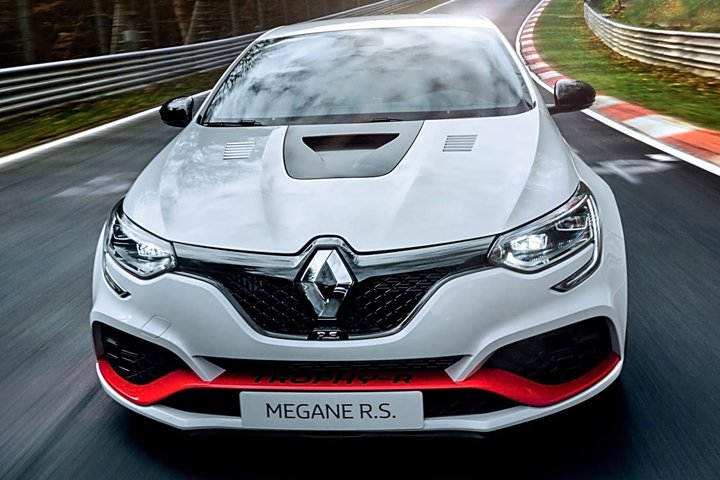 The Renault Megane R.S. has a rich history and purists love this car for its performance-oriented drivetrain and that it can be chucked around corners with ease. The latest iteration is the Megane R.S. Trophy-R, the orders books for which open in August, with first deliveries expected in time for Christmas.

This little pocket-rocket recently added a further badge to its accolades by becoming the fastest ever front-wheel-drive production car to have lapped the Nürburgring – in 7 minutes and 40.1 seconds. If you’re keen to park one on your drive, you’d better get your skates on as only 500 will be built, just 30 of which will be right-hand drive models reserved for UK customers. The Renault Megane R.S. Trophy-R’s biggest selling point will be its drivability. The specs on paper are not exceptional by any means. Indeed, they are the same as the ’regular’ Megane R.S. Trophy – a 1.8-litre, four-cylinder, turbocharged engine that churns out 296hp and 400Nm of torque.

Where it differs is in weight savings and the re-engineered suspension setup. This new R.S. Trophy-R weighs about 130kg (287lb) less than the regular Trophy model. To put that in perspective, Tyson Fury just climbed out of your R.S. Trophy carrying a 30lb sack of potatoes. The weight reduction is a culmination of various things, such as leaving out the rear seats, using carbon fibre for the bonnet, replacing the stock exhaust with a titanium Akrapovič exhaust, and even installing a smaller touchscreen that helped save half a pound! Renault has truly lived to the ’tiny drops make a mighty ocean’ philosophy here.

To further reduce weight, Renault has dropped the rear steering system on this car. This results in reduced stability at high speeds, but improves the driving dynamics at low speeds, especially while cornering. To further accentuate the weight-saving feel on the Megane R.S. Trophy-R, the suspension has been redesigned and now features motorsport-inspired components as well. Öhlins dual-flow valve dampers and lightweight springs make their way to the system. The aerodynamics also seem well-sorted, thanks to the carbon diffuser and the front air splitter. To reduce the car’s centre of gravity even better, drivers can lower the ride height by 16mm to further improve driving dynamics when pressing on.

Renault has installed Bridgestone Potenza S007 tires on the Megane R.S. Trophy-R, developed by Renault Sport, that are optimised for fast road and track use. For the braking duties, Brembo's four-piston front brake calipers take full responsibility for that. Just 30 cars of the 500 will be fitted with carbon-ceramic front brakes. Understandably, the same were used on the car that broke the Nürburgring track record. The remaining 470 cars may be equipped with them as an option. If you want to further reduce the weight on this fast hatch, you can opt for the carbon fibre wheels that shave 4.4 pounds off each wheel. Renault also offers Sabelt composite front seats with a six-point racing harness as optional. 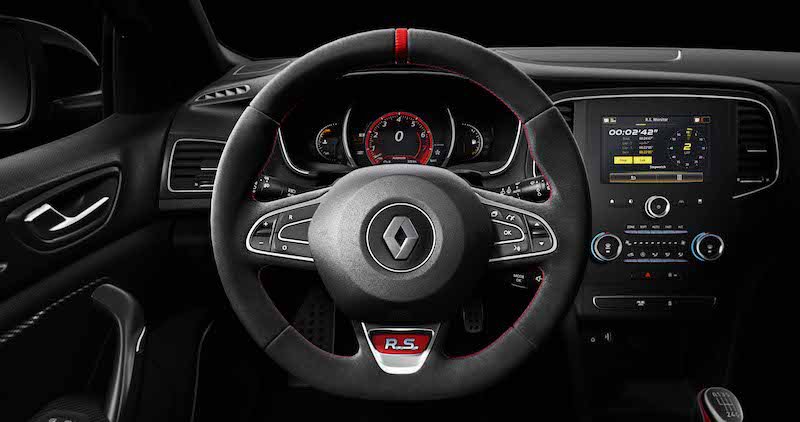 We’ve kept the best news for last because, this time, the engine is mated to a six-speed manual gearbox! Renault has ditched the automatic transmission on the Megane R.S. Trophy-R for it to remain lighter on the toes and to give the driver complete control over this beast. The French automaker has also installed a Torsen limited slip differential for improved traction. With all this equipment in place, the Megane R.S. Trophy-R sprints to 60 mph from a standstill in 5.3 seconds, before topping out at 163 mph.

To register your interest in leasing the Renault Megane R.S. Trophy-R, please call our friendly and helpful sales team on 0161 826 9716.