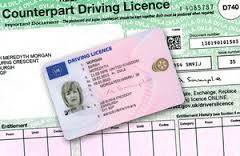 29 April 2015
The BBC and DVLA are warning us anyone wanting to hire a car abroad could need a code to show convictions for offences like speeding.

When generated the code is ONLY valid for 72 hours! If you want to hire a car more than three days into a trip you may need to generate a new code while abroad.

For those who do not have internet access, a phone number will also be available. The code is not an official requirement and it will depend on the vehicle rental company whether or not it is required.

The RAC said many drivers were unaware of the changes.

"Our research shows that with just over a month to go before the paper counterpart to the photo-card licence disappears, 55% of drivers are not aware of the planned change," said RAC spokesman Simon Williams.

The DVLA officially recommends destroying paper counterparts after 8 June, this may be a little premature we believe

The AA is advising people to hang on to the document, there may be some hire companies or official departments who are unaware of the new arrangements.

"Not all car rental companies, or indeed traffic police abroad, will be aware of the changes, so a 'belt and braces' approach of also taking the counterpart might help," said AA president Edmund King.

But the AA also said that hiring a car abroad without a paper counterpart is not always a problem.

Just as some car hire companies do not currently ask for a counterpart, not all will ask for a code after 8 June.

The British Vehicle Rental and Leasing Association (BVRLA) said the situation still was not clear.

"Due to the short notice provided by the DVLA and the need to thoroughly test the new system, many car rental companies are still finalising their plans for the UK and abroad," said a BVRLA spokesperson.

The old-style paper licences, issued before the photo card was introduced in 1998, will remain valid, but holders will still need a code to fully validate them.

HOW DO I CHECK?

To view a record of convictions, motorists can log on to the View My Driving licence page of the government website.

They will need their driving licence number, their national insurance number and their postcode.

The changes do not apply to driving licences issued by the DVA in Northern Ireland.