After several months of speculation fuelled by camouflaged spy shots, the all-new Mercedes GLB family SUV has finally been revealed.

Slotting between the Mercedes GLA and Mercedes GLC, the GLB will be a more practical SUV with the option of seven seats. Pre-orders will open in mid-July, with first UK deliveries expected around November, 2019.

The all-new Mercedes-Benz model borrows heavily from the compact A-Class, but whereas that is a brand-entry hatchback/saloon, the GLB-Class offers buyers a classic SUV shape on a compact platform with something not often found at this level – the option for three-row, seven-passenger seating – a first for Mercedes-Benz in this category. The optional third row accommodates two additional passengers, with cup holders between the seats and USB power ports for phones or other devices. The GLB’s side airbags extend to protect third-row passengers and Mercedes-Benz points out the availability of Isofix anchor points for child seats.

As a five-seater though, the new GLB sounds more adult friendly. With row three not in use, the compact SUV offers 560 litres of cargo capacity (55 litres more than the BMW X1), and a significant 1,755 litres with row two folded flat. Second-row passengers also have the ability to move the seats fore and aft to better accommodate people or things. Up front, driver and passenger are greeted with an interior quite similar to the A-Class, albeit with a bit more headroom. A digital cockpit with a seven-inch instrument screen and a seven-inch centre touchscreen display dominate the dash, the latter allowing access to a multitude of standard-issue tech including Apple CarPlay and Android Auto. The automaker’s MBUX system with voice control is also standard, as are a suite of driver assist systems including active braking, crosswind assist, and a rear view camera. Optional packages include blind spot assist, navigation, parking assist, larger 10.25-inch displays, an upgraded Burmester surround sound audio system, a head-up display, and much more. 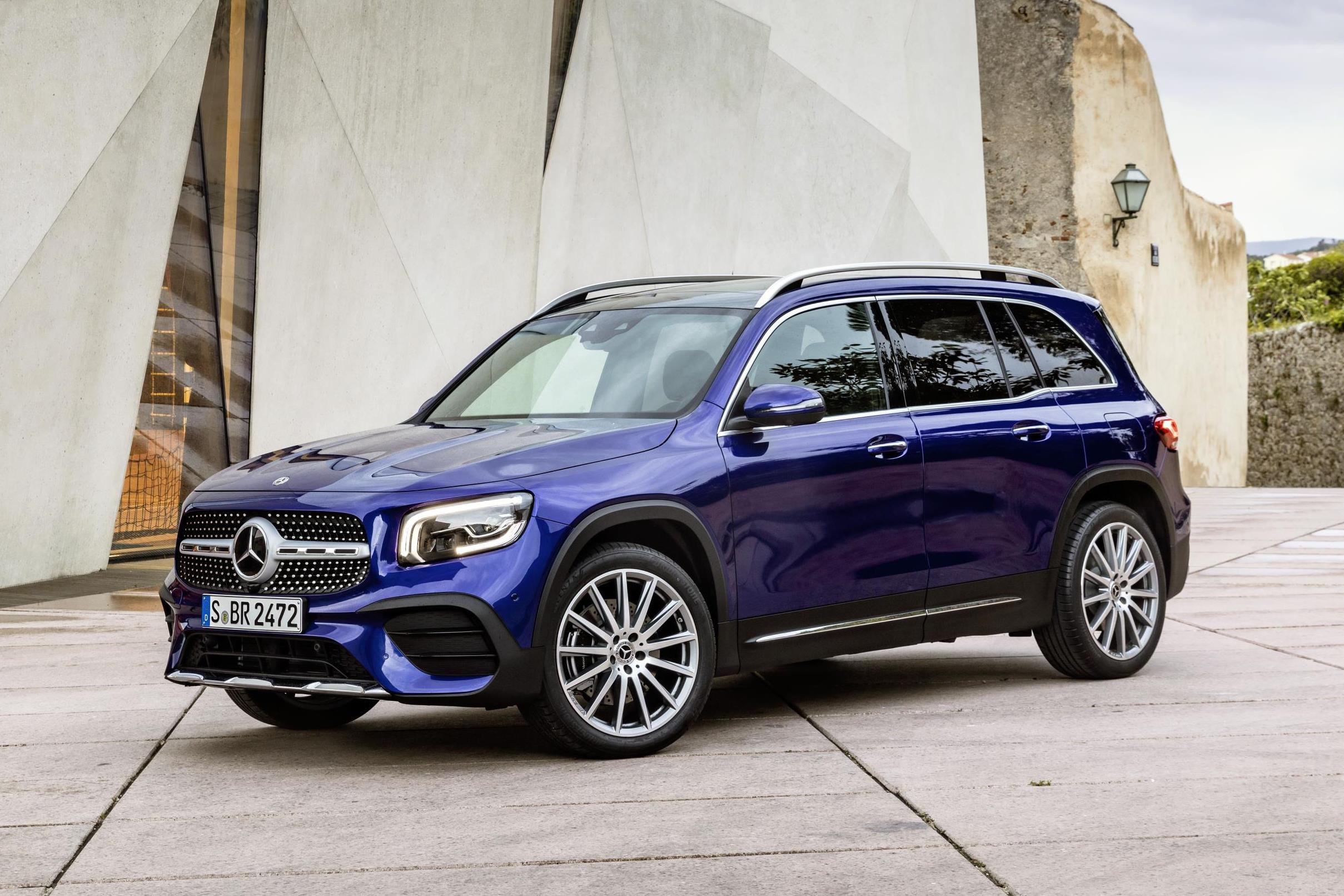 Though the GLB-Class adopts a more traditional SUV exterior look, it’s not quite as boxy as the early camouflaged prototypes suggested. Yes, there are A-Class bones underneath it all, but the wheelbase is over 100mm longer than the GLA-Class and just 43mm shorter than the GLC-Class.

The launch line-up will initially consist of four models, with all but the top-of-the-line diesel offered with front-wheel drive as standard. Buyers will be able to choose between two four-cylinder petrol engines and a single four-cylinder diesel in two different states of tune. A seven-speed dual clutch gearbox is standard in the GLB200, while the GLB250, GLB200d and GLB220d 4Matic utilise an eight-speed gearbox.

Still under development is a four-wheel-drive plug-in hybrid GLB variant, featuring an electrified rear axle and a pure electric range that Mercedes-Benz suggest will exceed 31 miles. The GLB will also form the basis of a full electric EQB, due to arrive in 2021.

To register your interest in leasing the all-new Mercedes-Benz GLB-Class compact SUV, please call our friendly and helpful sales team on 0161 826 9716.

Whichever body style you choose, you’ll be able to get from 0-62mph in...