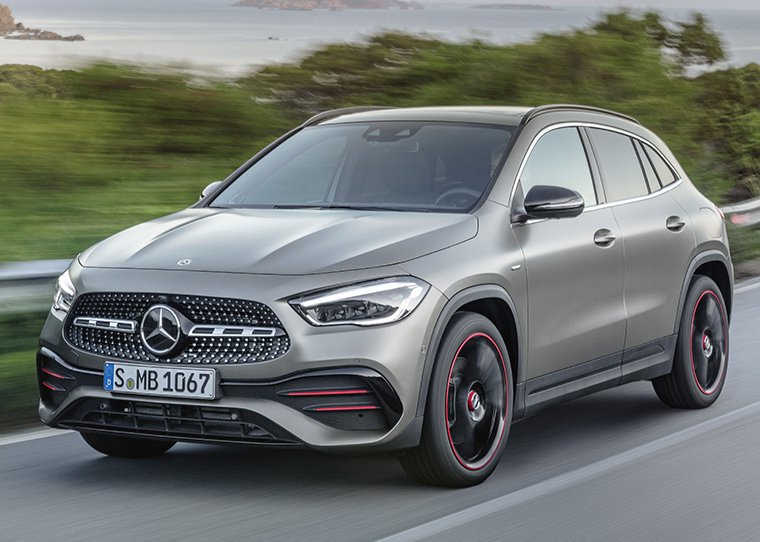 Offering more interior space thanks to as longer wheelbase, the second-generation GLA SUV goes on sale in spring. Both plug-in hybrid and rapid AMG models will be available.

Mercedes has officially unveiled the new Mercedes GLA. Based heavily on the A-Class hatch, the German marque’s smallest SUV borrows styling cues from both it and other models in Mercedes’ existing SUV range. You’ll be able to order the GLA from spring 2020, with lease prices and final specs set to be announced in the coming months. The new car is over 10cm taller than the car it replaces, with SUV styling touches like black plastic body cladding and faux scuff plates. The wheel arches are also more squared off than they were on the previous model. At the front, a wide grille sits between angled LED headlights, while the rear features a wide tailgate opening and a bumper with chrome inserts and two square exhaust pipe finishers. The inside of the new GLA represents a significant upgrade on the outgoing model. The interior is carried over almost wholesale from the A-Class hatchback and features plusher materials and cutting-edge technology.

Mercedes’ latest ‘MBUX’ infotainment screen comes as standard and you’ll be able to have the more impressive 10.25-inch screens over the base 7-inch screens on the top trim levels as an option. DAB radio, cruise control and navigation will be fitted, and higher trim levels will offer high-functionality LED headlights, multi-zone climate control and a sportier AMG-Line body kit. Rear legroom in the new GLA has been significantly improved with the addition of a split sliding bench. There’s up to 116mm more space behind the front seats than in the previous car and shoulder room has improved too. The taller shape also means a higher driving position and a better view of the road ahead. Boot space is up to 421 litres, 14 litres more than the last car.

The new GLA will use turbocharged four-cylinder diesel and petrol engines already deployed in the A-Class, with between 114 and 221hp. A range-topping AMG 35 model with 302hp is to make an appearance later, too.

The GLA will also share a stretched version of the A-Class’ underpinnings, and four-wheel drive will be offered on the AMG model and selected engines throughout the range. The amount of power sent to each set of wheels depends on the driving mode you select. A plug-in hybrid will join the line-up later.