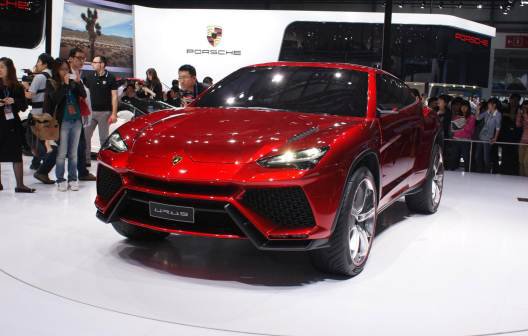 It's Official: Lamborghini will begin building their long-awaited SUV, due in 2018

28 May 2015
One of the iconic names in supercar manufacturing, Lamborghini, will begin production of their first ever SUV aimed solely at the domestic market, based on the company's 2012 concept called the Urus. Later than expected, (but you cannot rush such perfection) the Urus will see Lamborghini enter a new motoring sector within the prestige SUV market.

It will be taking on such rivals as the next Porsche Cayenne model, Aston Martin (who are planning an SUV of their own, based on the DBX), in addition to the end example from Maserati called the Levante and current rendered designs from Rolls Royce and Bentley too.

So, it seems that for many luxury automotive manufacturers, its been a busy few years in their design studios, competing to produce what they feel would be the best SUV design to reflect their company image and appeal to their targeted audience.

Lamborghini, who, with Ferruccio Lamborghini at the helm began it's early life as a company designing and manufacturing agricultural equipment and tractors. In addition to tractors, Lamborghini are also well known for building competition marine engines used in the World Offshore Powerboat Series Class 1 powerboats.

Having produced a range of vehicles and engines, together with their hugely admired array of supercars, it isn't difficult to consider the relative ease of entering the SUV marketplace as a new contender with an age of experience and resources.

And so, in keeping with the unmistakable aesthetics of this leading supercar brand, the Lamborghini Urus will be hitting our roads in 2018, just three years away. A long time to wait you ask? Not at all, considering that its been almost 30 years since Lamborghini launched their LM002, the Hummer-esque rough and tumble SUV that was designed to appeal to the worlds military groups.

However, Lamborghini failed to win the contract. 328 were produced as the “Rambo Lambo”, being sold off to mainly US customers. A behemoth of epic proportions, little was thought of producing another SUV under the prestigious name following Lamborghini's LM002.

This new Urus though, seems to have inherited the style and loved aesthetics of Lamborghini's most favoured supercars such as the Aventador and the Gallardo, offering all round stunning styling, together with the performance and luxurious display of futuristic touches and creature comforts you expect from such a renowned bespoke supercar designer.

Stephan Winklemann, Lamborghini's CEO says that: “This is a proud moment for everybody in Lamborghini,” following by adding: “The introduction of a third model line endorses the stable and sustainable growth of the company and signifies for us the beginning of a new era.”

What is to be one of the most alluring aspects of the new Urus will be the price. Undisclosed at the moment it will however be far cheaper than its supercar brethren and competitively target other luxury SUV's that will be available on the market.