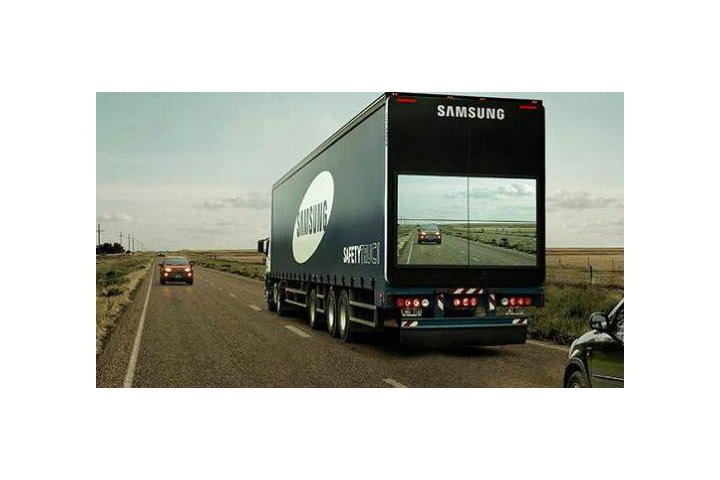 I can see clearly now the truck has gone....transparent?

What's your biggest bane of driving on single-carriageway roads, aside from the monotony that accompanies long distance drives for many motorists? Well for the majority of drivers it has to be the problem of getting stuck behind slow-moving trucks, those hauling large articulated trailers.

Well, those clever chaps at Samsung have invented a fantastic solution with their advanced technology, following a call to lower the high death toll of motorists pulling out to overtake lorries, unable to see the road ahead clearly.

In an array of countries, particularly places such as Argentina, there are hundreds of one-lane roads where HGV's are plentiful, transporting much of the countries export goods to worldwide destinations. A higher ratio than other countries, there, deaths on the roads as a result of overtaking accidents takes up the top slot.

In light of this worrying news, Korean technology giant, Samsung, wanted to make a difference and so have fitted out several of their truck and trailers with the latest tech that allows motorists to see the road ahead, via wireless cameras and four large screens affixed to the rear doors of the trailers.

What motorists see is the road ahead, clearly. Even at night, the cameras project the road ahead onto the four screens on the trailer, the result? A safer journey for everyone.

Therefore, in either daylight or by using night vision technology, motorists can safely manoeuvre around these large vessels, thanks to the 'magic of television' and as the trial takes place in Argentina, we could see this revolutionary feature being applied to all commercial vehicles.

Imagine the answer to drastically reduce and possibly eliminate accidents from blindly overtaking slow, wide load vehicles in the near future could finally make a global appearance?

Leasing Options give it the full thumbs up and so too will motorists the world over, giving them and their loved ones further protection, especially on some of the world's most notorious roads.