Ford has released full specs and techs for the new, third-generation Kuga SUV, with first deliveries expected early next year. 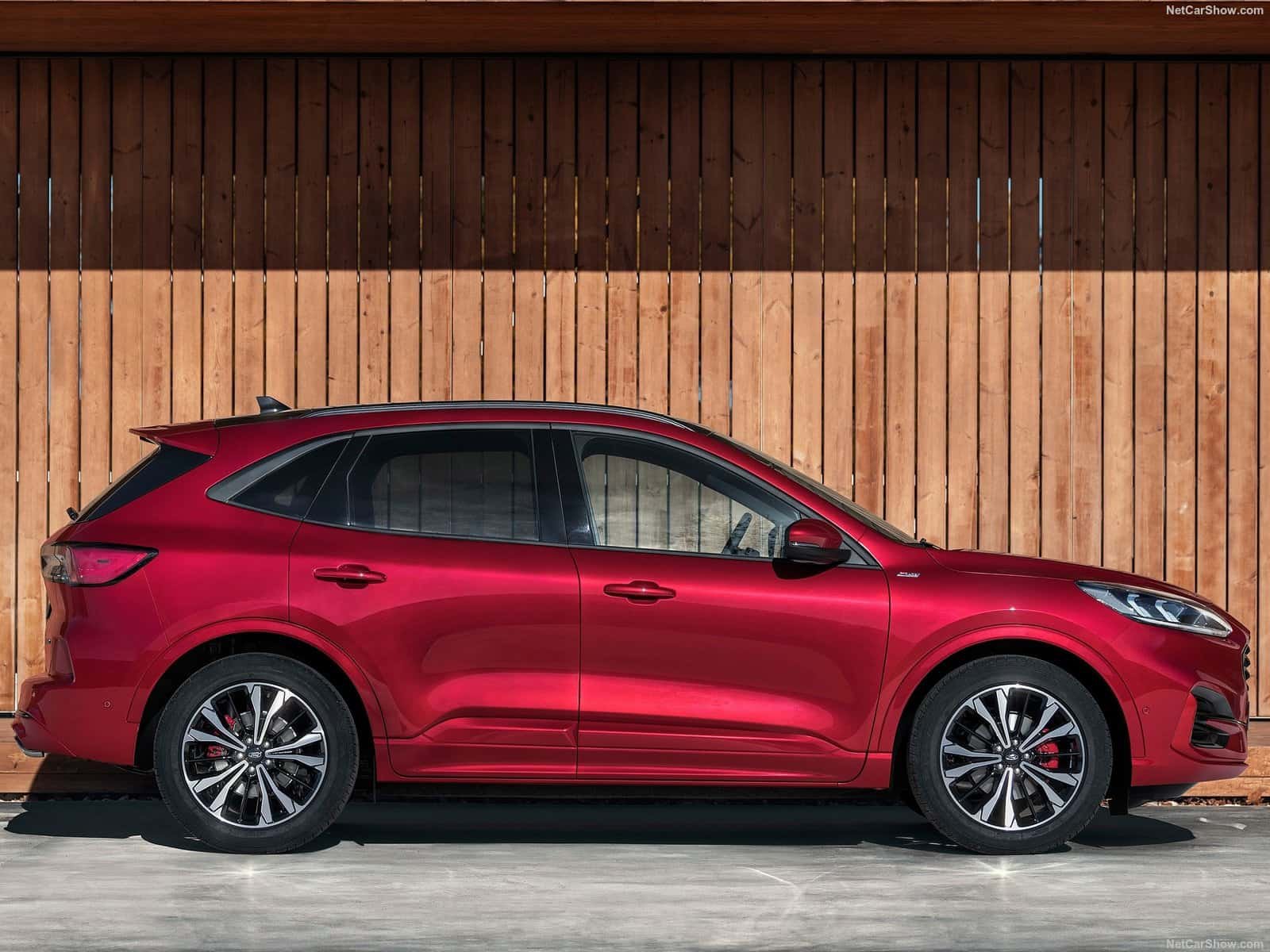 Ford has released full specs and techs for the new Ford Kuga, available in five trim levels: Zetec, Titanium, ST-Line, ST-Line X and range-topping Vignale. Two petrols, three diesels and a plug-in hybrid version are available, although the hybrid and most powerful diesel aren’t available in the entry-level model. 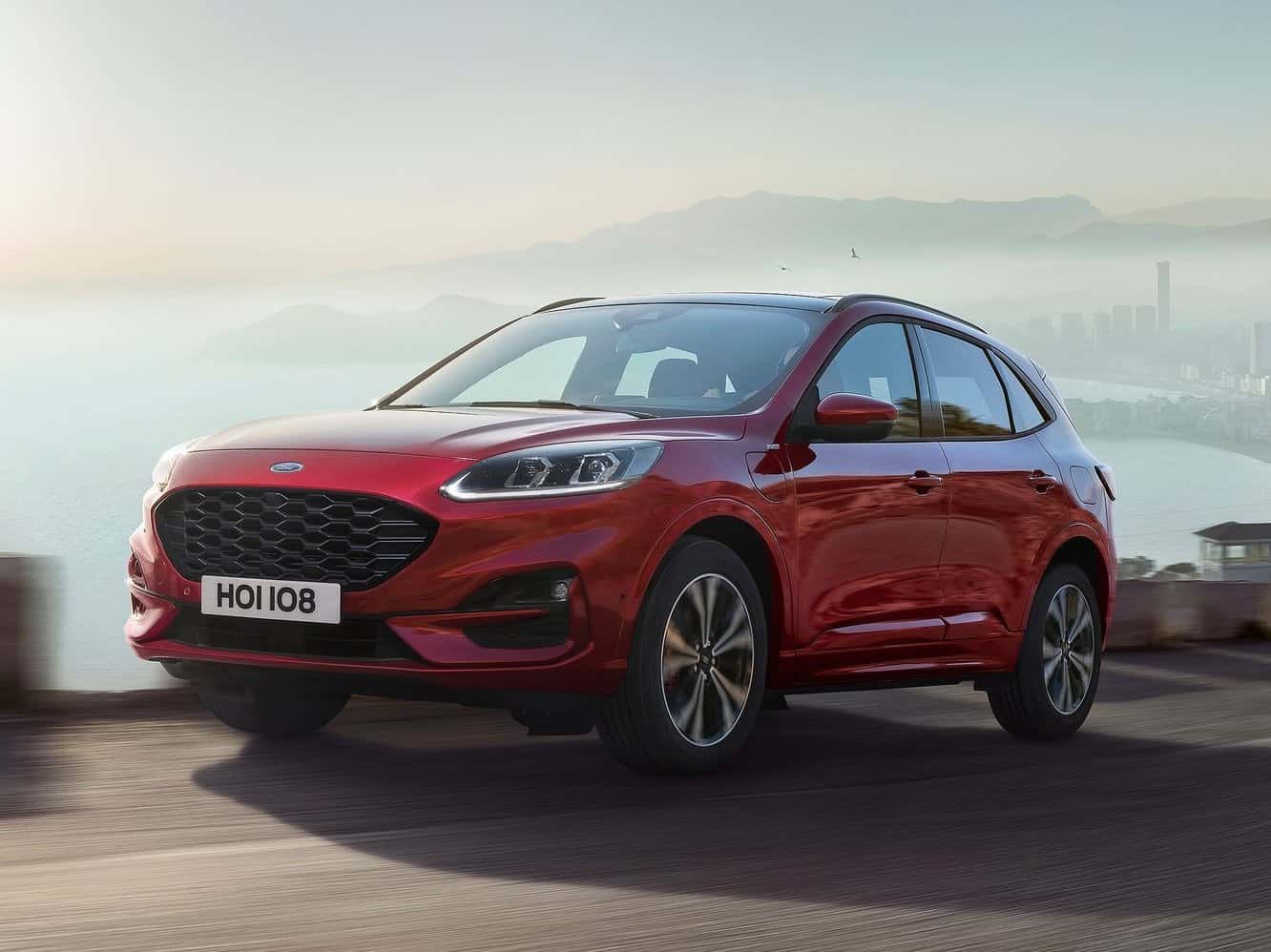 Step up to the ST-Line and ST-Line X and you’ll get a sporty body kit and black roof rails and a 12.3-inch digital instrument cluster, a sports steering wheel and alloy pedals. ST-Line X adds a panoramic sunroof, a powered tailgate and heated, electrically adjustable front seats. Vignale is the most luxurious model in the range and features model-specific finishes and trim pieces. Matrix LED headlights (preventing glare for oncoming drivers) are included as standard, alongside a hands-free tailgate, metallic paint, a heated steering wheel, active noise cancellation and leather upholstery. Across the range, twelve colour choices are available, including a new ‘Blue Panther’ paint exclusive to Vignale models.

The new Kuga can be powered by Ford’s turbocharged 1.5-litre three-cylinder petrol engine, offered in two power outputs – a 118hp entry-level model and a 148hp variant. Just like in the Ford Fiesta ST, the engine uses cylinder deactivation under light throttle to save fuel. Ford says this, and other technology, means the Kuga should manage 43mpg in WLTP testing.

Diesel models of the Kuga will continue to be offered alongside the petrol engines, with both 1.5-litre and 2.0-litre EcoBlue diesel engines available. The majority of the new Kuga range will be front-wheel drive, but four-wheel drive could be offered in higher spec versions with the option of a six-speed manual or Ford’s new eight-speed automatic gearbox.

Mild-hybridisation is fitted on the 148hp 2.0-litre EcoBlue diesel engine to further reduce fuel consumption. It’ll run functions like the radio, allowing the engine to shut down at low speed. Ford claims CO2 emissions of 132g/km and 56mpg. Alongside the mild-hybrid technology, Ford is also offering the Kuga as a plug-in hybrid (PHEV). The company anticipates a purely electric driving range of 34 miles which is enough for many people not to need the engine while commuting, and a CO2 output of just 29g/km. The PHEV will combine a 2.5-litre four-cylinder petrol engine with an electric motor and a 10.3kWh lithium-ion battery, which together produce 222hp and is said to manage 235mpg. 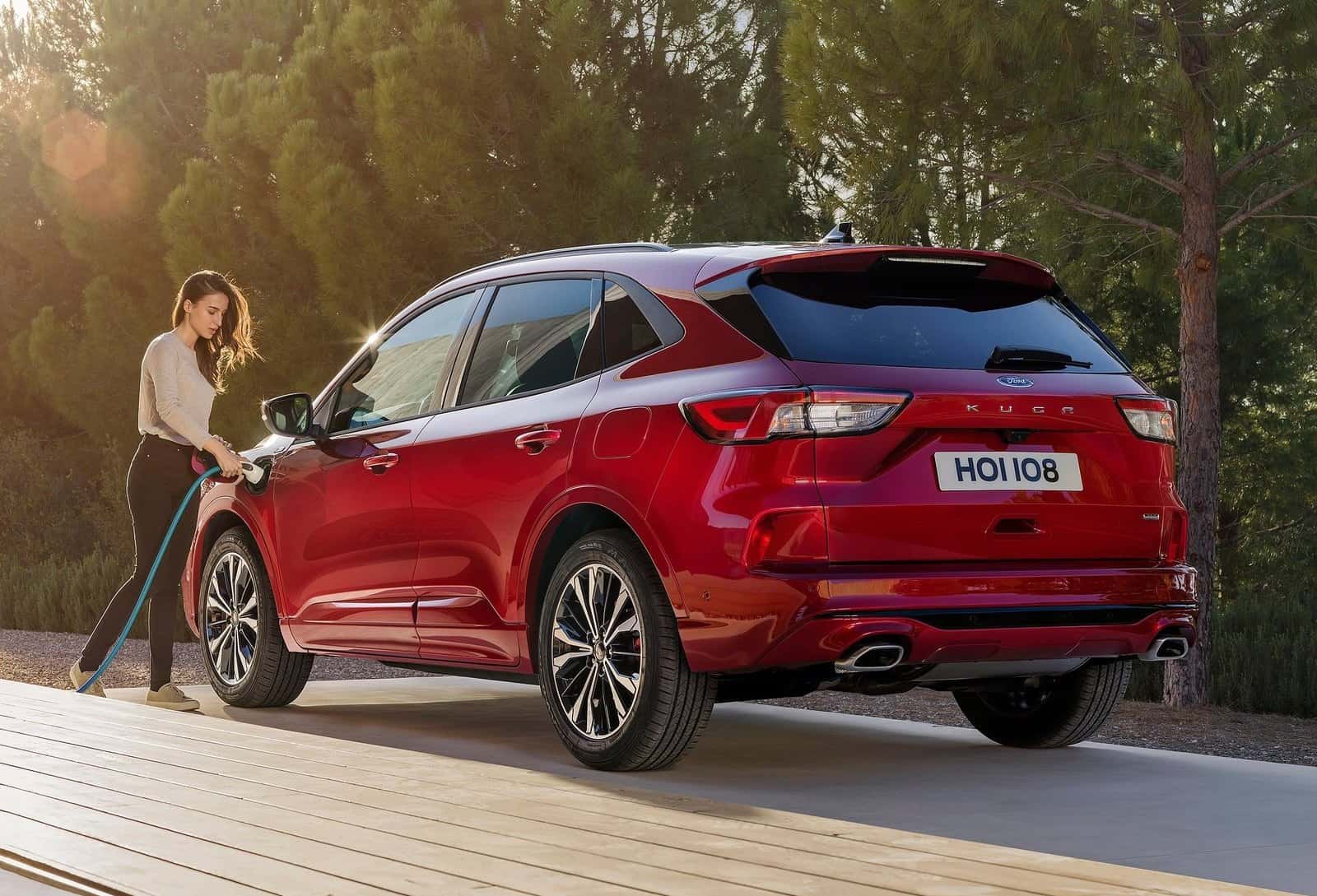 The car recaptures some of the energy lost in braking to increase the electric-only range but, when you’re getting low, you can recharge from a 230V socket in about four hours. Fast-charging doesn’t appear to be available, although this may come later. However, you can choose when to use the battery, thanks to EV Auto, EV Now, EV Later and EV Charge modes. 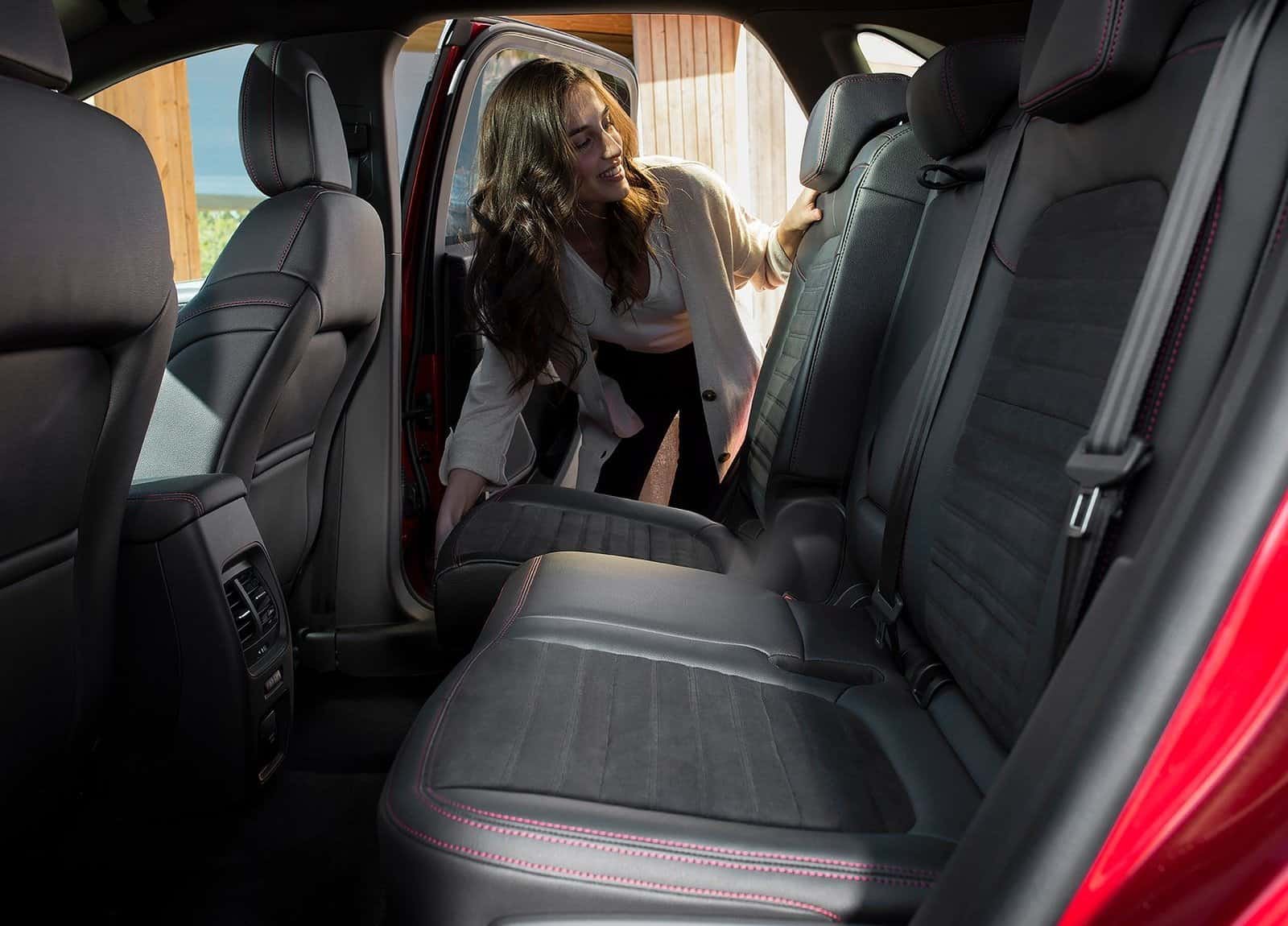 Sitting on a new platform, the Kuga now offers much more space than the current car. It’s slightly longer and wider and the distance between the wheels has grown as well, so it’s said to offer class-leading space for those in the back seats. There’s also more space in the front, while the rear seats can slide forwards and backwards, increasing boot space by up to 67 litres if needed. 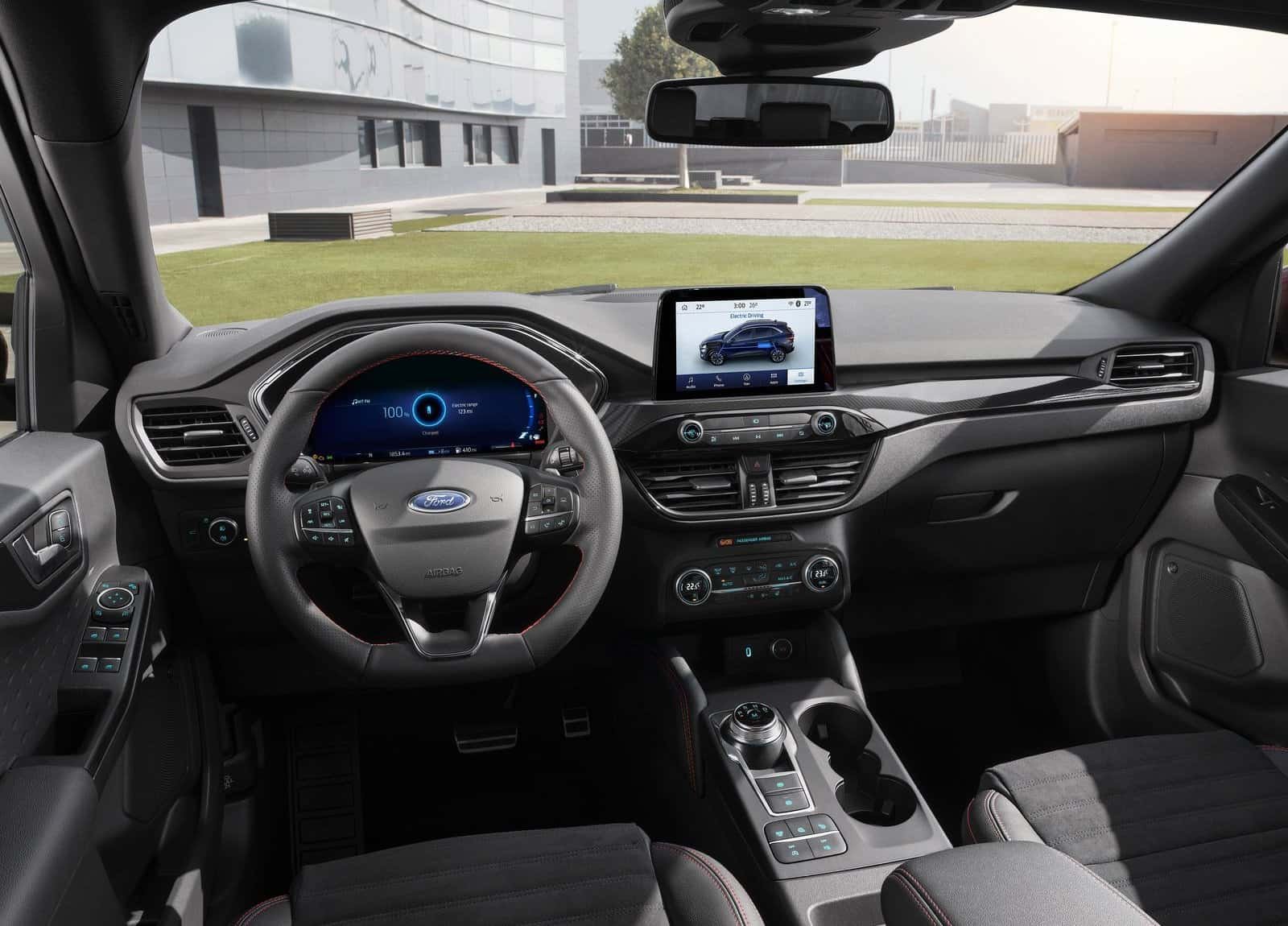 The interior of the Kuga is very similar to that of the Focus, with horizontal lines and an uncluttered look thanks to a large touchscreen. This is perched above the centre console, ranges in size from 6.5-inches and includes Android Auto and Apple CarPlay compatibility. FordPass Connect is also available, which includes a range of online features, and you can choose to have heated outer rear seats for the first time. Ford has given the Kuga a much wider range of safety technology for this new model. You can tick boxes for Co-Pilot360 (the car can drive, turn, stop and park for you), adaptive cruise control, speed limit recognition, lane-centring technology, wrong-way alert, evasive steering assistance, a head-up display, active parking assist, blind-spot monitoring. Accordingly, the new Kuga scored a full five stars in the latest round of Euro NCAP safety testing released just this week.