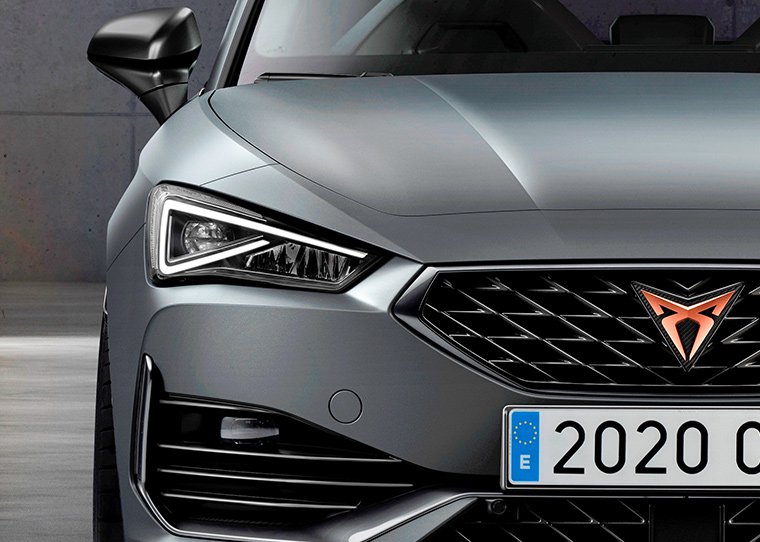 The new CUPRA Leon performance hatch and estate will be offered with a range of powertrains including a plug-in hybrid for the first time. Hot on the heels of the reveal of SEAT’s all-new Leon at the firm’s Martorell factory near Barcelona, comes the high performance CUPRA Leon. It replaces the outgoing SEAT Leon Cupra (note proper naming of the now stand-alone CUPRA performance brand), so there’s the same choice of five-door hatchback and estate body styles as the SEAT version. The engine range is completely new and includes a powerful yet economical plug-in hybrid model. The CUPRA Leon is available to pre-order now but lease rates and full specifications are yet to be finalised. This new car is the first CUPRA-badged Leon and the eye-catching copper exterior elements and alloy wheels are similar to those of the existing CUPRA Ateca. The CUPRA Leon also gets much bigger front air intakes that the regular Leon, a rear diffuser sitting between two sets of dual exhaust pipes and extra vents in the rear bumper. Even with the aesthetic changes, it’s far more subtle than the bonkers Honda Civic Type R, while other rivals include the Ford Focus ST, Renault Megane RS and Hyundai i30 N. In the engine bay there’s a new plug-in hybrid system that’ll also be used in the upcoming Skoda Octavia vRS and CUPRA Formentor. A 1.4-litre petrol engine, electric motor and 13kWh battery pack combine to produce 242hp, and you’ll also be able to travel up to 37 miles on a full charge. Official CO2 emissions for this engine come in at under 50g/km, which will please company-car drivers, as well as buyers who have to commute into London; it’s exempt from the Congestion Charge – at least for now.

The battery pack will recharge in around three and a half hours from a 3.6kW wallbox, or around six hours from a standard three-pin domestic plug.

Alongside the plug-in hybrid, you can choose from three petrol options. The cheapest will be a 2.0-litre petrol engine with 242hp, which will rival the Volkswagen Golf GTI and this engine is also available retuned to 296hp. Both of these versions are front-wheel drive and can be ordered with the hatchback or estate.

CUPRA Leon estate buyers will also have the option of a more potent 306hp version of the 2.0-litre engine, mated to CUPRA’s 4Drive four-wheel drive system. This model will be the quickest in the range, getting from 0-62mph in just 4.8 seconds, which is around a second faster than the outgoing model and going on to a regulated top speed of 155mph. All four engines are paired with a DCT dual-clutch automatic transmission. The CUPRA Leon gets chassis tweaks to improve handling and agility. The Brembo brakes at 370mm diameter are much bigger than those on the SEAT Leon, while four driving modes are selectable; Comfort, Sport, CUPRA and Individual settings. Adaptive Chassis Control is also offered which scans the road ahead and adjusts the suspension to iron out imperfections. Compared to the SEAT Leon, the CUPRA-badged version rides 20mm lower to the ground.

The interior matches the outside with a host of copper-hued touches, and CUPRA models also benefit from more supportive front sports seats, dark chrome finishers and a CUPRA steering wheel, complete with two new buttons for the ignition and driving mode selection. Like the SEAT Leon, a 10-inch infotainment touchscreen is mounted on the dashboard and it’s joined by a digital instrument cluster of the same size. The touchscreen gets voice and gesture control, plus Android Auto and wireless Apple CarPlay. An accompanying app allows users to remotely access driving data, lock/unlock the doors, see where the car is parked and set up a series of alerts. If you buy the hybrid model, the app also lets you oversee the charging progress and pre-sets the cabin temperature.

As the flagship model, the CUPRA Leon gets plenty of innovative safety technology alongside the state-of-the-art connectivity features. Blind-spot monitoring, lane-keeping assist and traffic jam assist are all fitted as standard, and there’s also a predictive adaptive cruise control system. This works with the satnav, a front-mounted camera and the traffic sign recognition system to adjust the cruise control speed based on the road layout ahead.