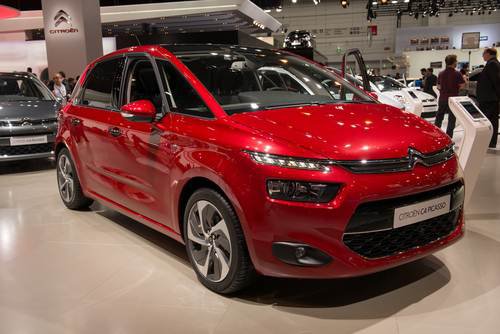 Citroen Grand C4 Picasso: What Do The Reviews Say?

Practical and spacious, the Citroen Grand C4 Picasso has received positive feedback since it hit British soils at the beginning of this year. It's been praised for (amongst other things) its supple suspension, light steering and roomy interior. With so many reviews out there, we've summarised what some of the top car websites make of the Citroen Grand C4 - to save you doing the leg-work.

According to the guys at WhatCar, the Grand C4 has the best visibility of any MPV out there; there's a huge expanse of glass that goes all around, there's no obstruction to the view from the front pillars and the windscreen stretches up and over the front two seats. They also praise the comfort of the driving position, dual-zone climate control, rear-parking sensors and automatic wipers and lights. Most importantly, however, they give five stars for space and practicality: it's extremely easy to fold the middle-row seats flat and the boot offers more space than you could ever wish for.

AutoExpress believe the latest model takes MPVs to a whole new level, offering the kind of equipment levels that you'll struggle to find on premium brands within a similar price range. They describe its practicality as "superb", with one of the best folding seat arrangements they've ever seen. On top of all the useful qualities of the interior, however, it also looks great. AutoExpress say that this is unusual for an MPV, but its mixture of "French flair" and "Germanic solidity" certainly makes it stand out from the crowd.

Top Gear can't sing the Citroen Grand C4 Picasso's praises highly enough. In terms of driving, they claim the car has competent and well-judged suspension, but it's the inside they seem to rave about the most; so much thought has been put into the interior that it's a "delight", they say. From storage bins to pockets to torches and umbrellas in the boot – they've thought of everything, making it totally "irresistible". They love the rear air conditioning system, the big sunroof and the flip, side and fold seating.

According to Car Buyer, the new Citroen Grand C4 Picasso is a perfect mixture of smart and contemporary design with impressive economy and an extremely spacious interior - the perfect ingredients for a seven-seater MPV. While seven-seaters are not known for being hugely efficient, this new model "bucks that trend", they say. It's one of the only ones that manages less than 100g/km emissions, making it one of the cheapest large MPVs to run. They describe the car as "extremely versatile", with folded seats able to create a large amount of luggage space. It feels well-made and has a quality interior. Citroen are not shy on their safety equipment either, so the Grand C4 Picasso should be a safe family transport.

Ever get stressed out or annoyed when a piece of furniture or some...